My Experiences During The White-tailed Deer Rut 2022

Deer are part of the family Cervidae.  The two main groups of deer are the Cervinae and Capreolinae.  In Pennsylvania, we have representatives in both groups.  Cervinae includes Elk and the Capreolinae, includes the White-tailed Deer.  Capreolinae includes the moose and while we don't have moose in Pennsylvania, it isn't a very far drive north to find one.  What's my point of telling you all of that?  If you follow the Cervidae family of mammals, you will see this head position a lot.  Typically, they are sniffing or tasting the air to detect something.  In this case, he was curious about me.  Was I friend or foe! 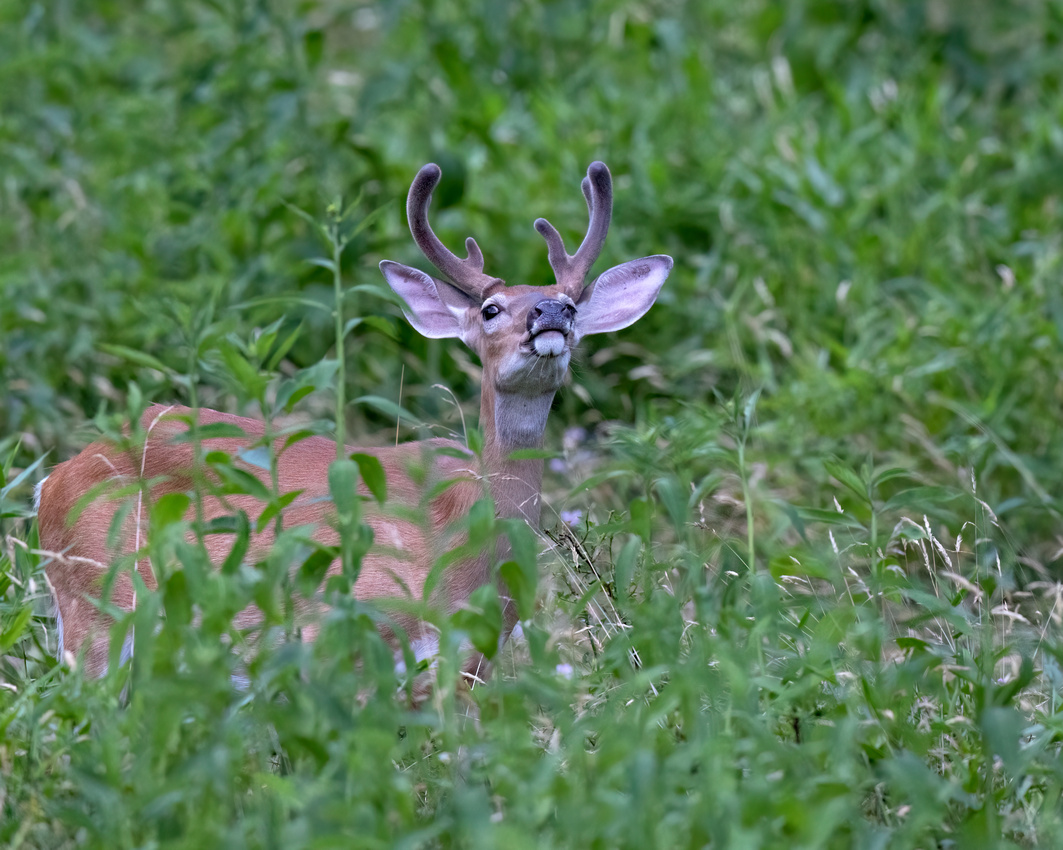 This photo was shot from the cover of my SUV.  I was driving home from Venango County after an unsuccessful Bobcat hunt and I saw two bucks grazing in a field.  I quickly pulled over and even though it was almost too dark to make a photo, I did it anyway. 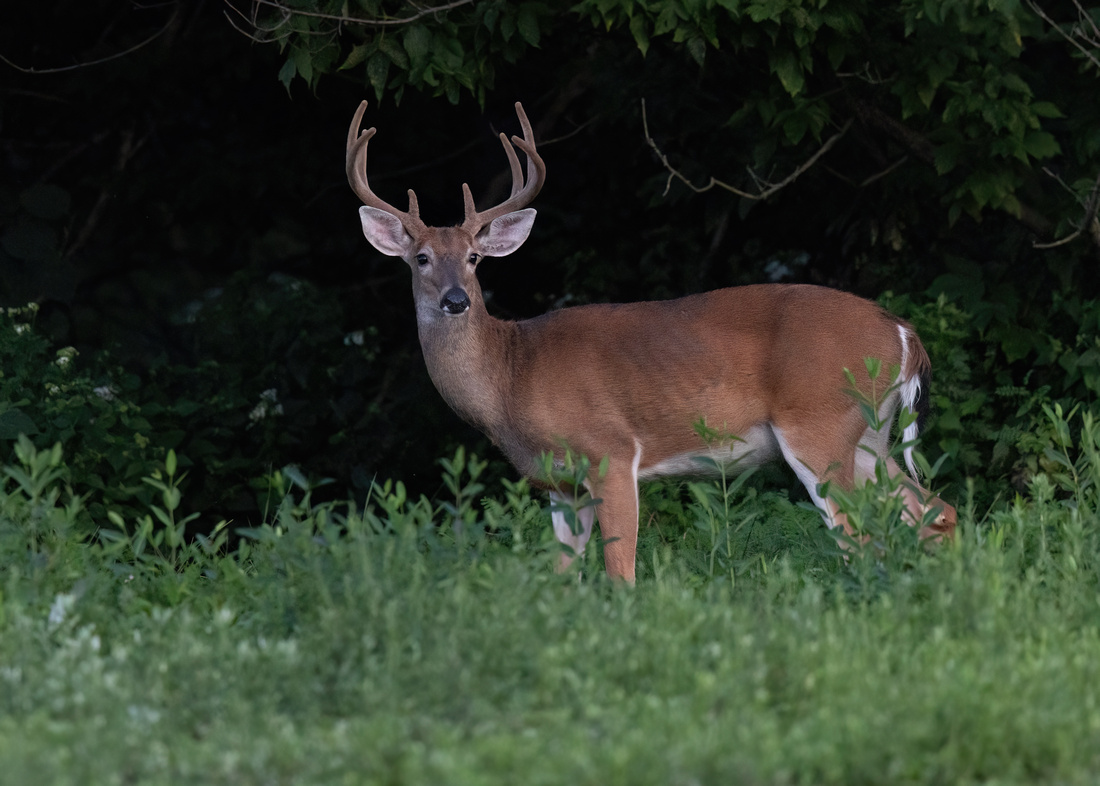 This is the second buck of the two mentioned above. 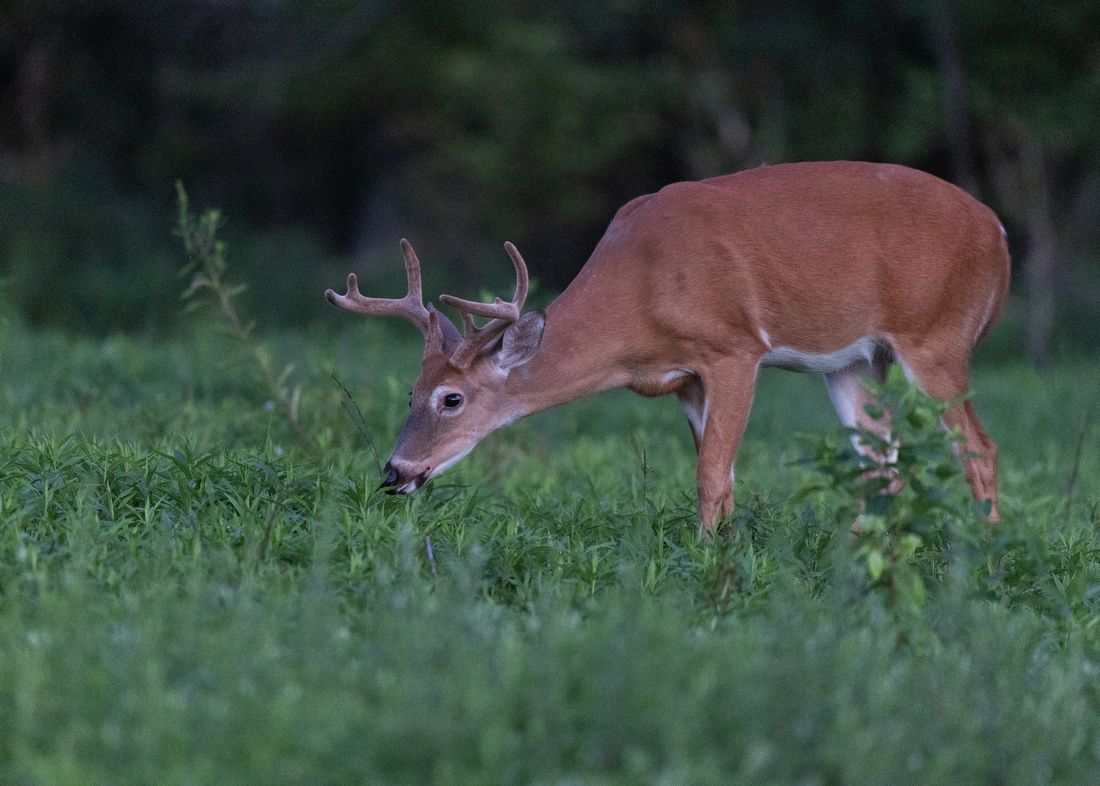 It was September 3rd when I saw my first velvet-free buck of the season.  He was backlit by the setting sun in a field of Goldenrod presenting a difficult exposure but I managed to bring out the details while preventing a silhouette. 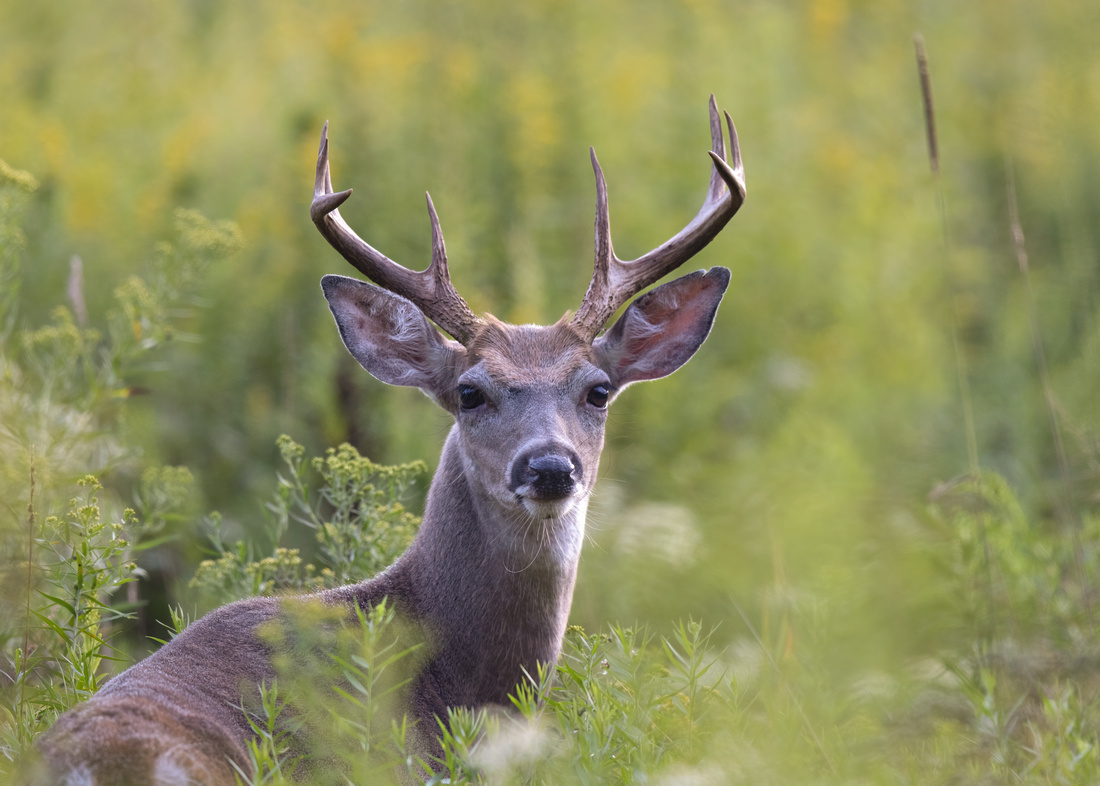 After I finish photographing the Elk rut I focus my attention to White-tailed Deer.  I usually begin to see activity in late October.  These two young bucks weren't pushing very hard.  It was just a little sparring to kick off the rutting season. 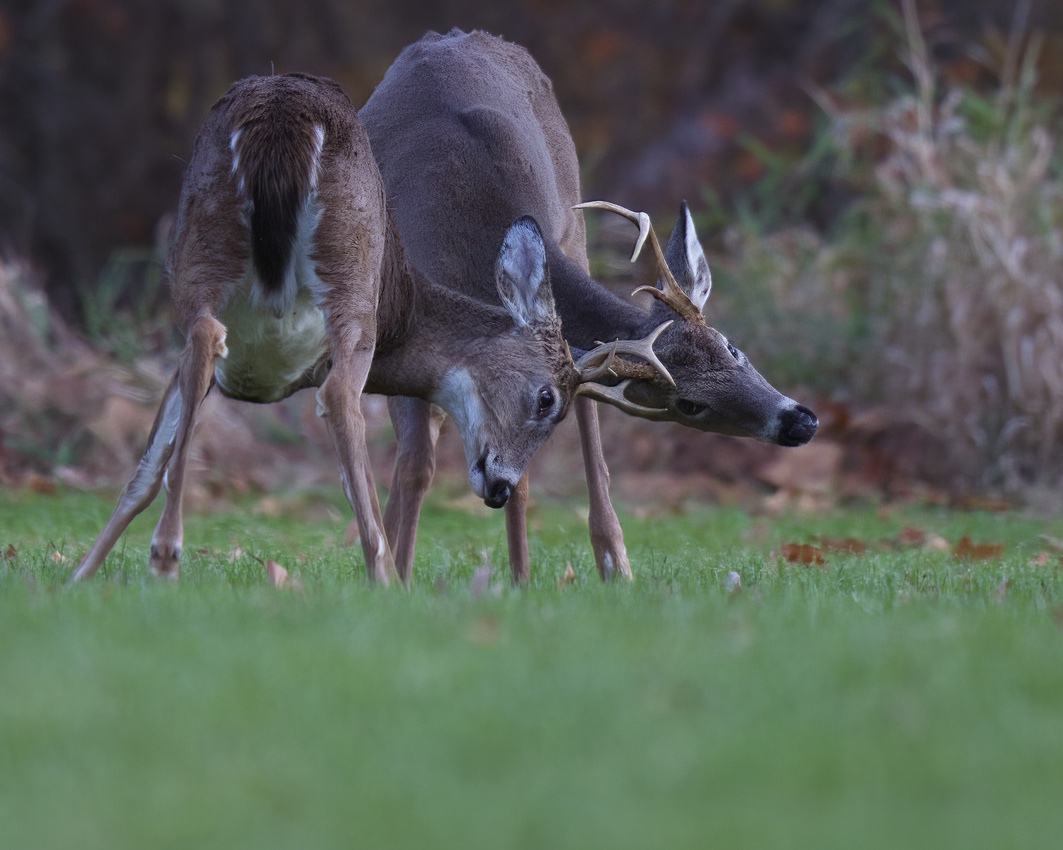 It's a good thing the grasses aren't too thick. 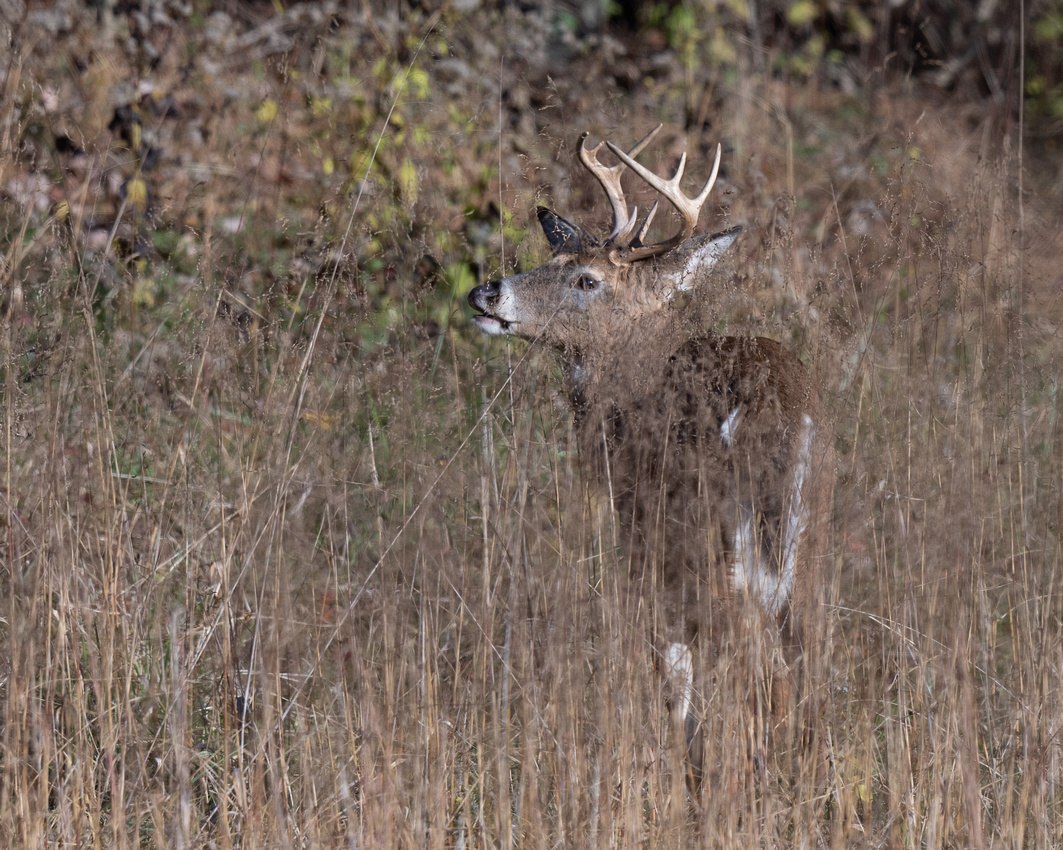 I saw this doe while driving in one of my favorite spots.  I stopped the vehicle to watch her for awhile.  When I find a lone doe during the rut, it's likely a buck is hidden somewhere nearby. 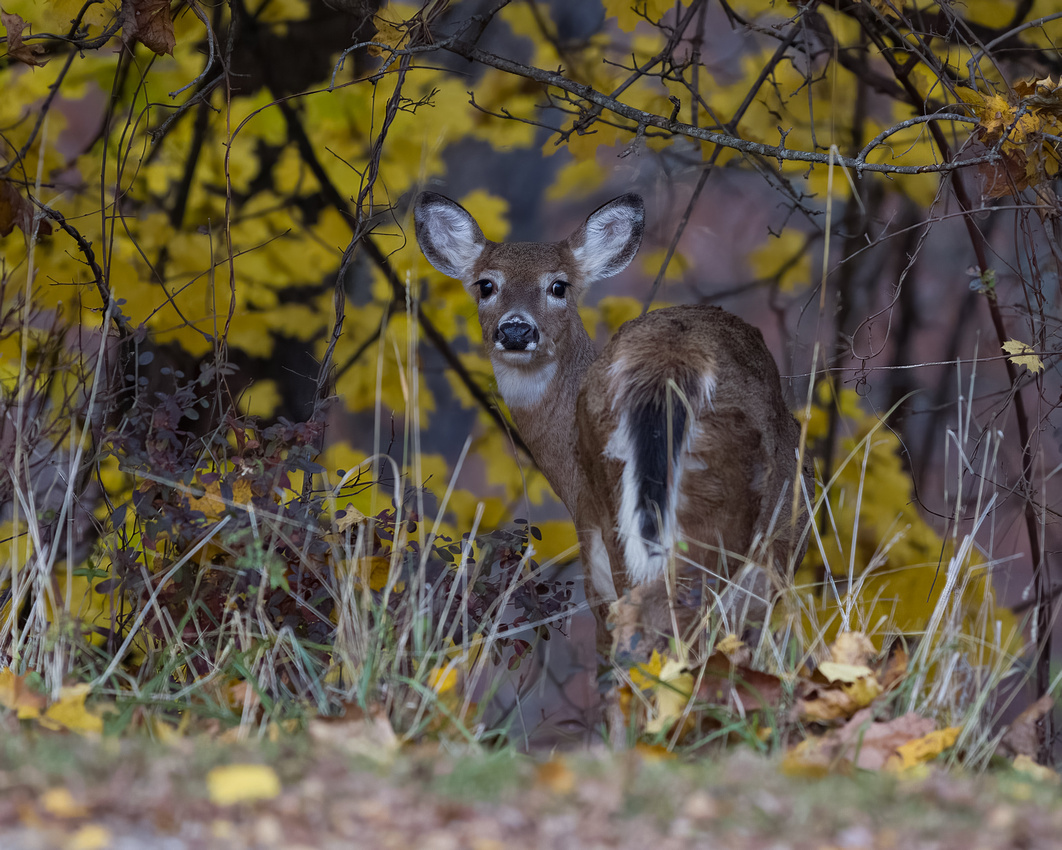 I only waited a few minutes before I saw movement on a downslope of a bank.  I saw it was a nice buck but the woods was very thick and I had to wait until he presented himself.  This view was brief. 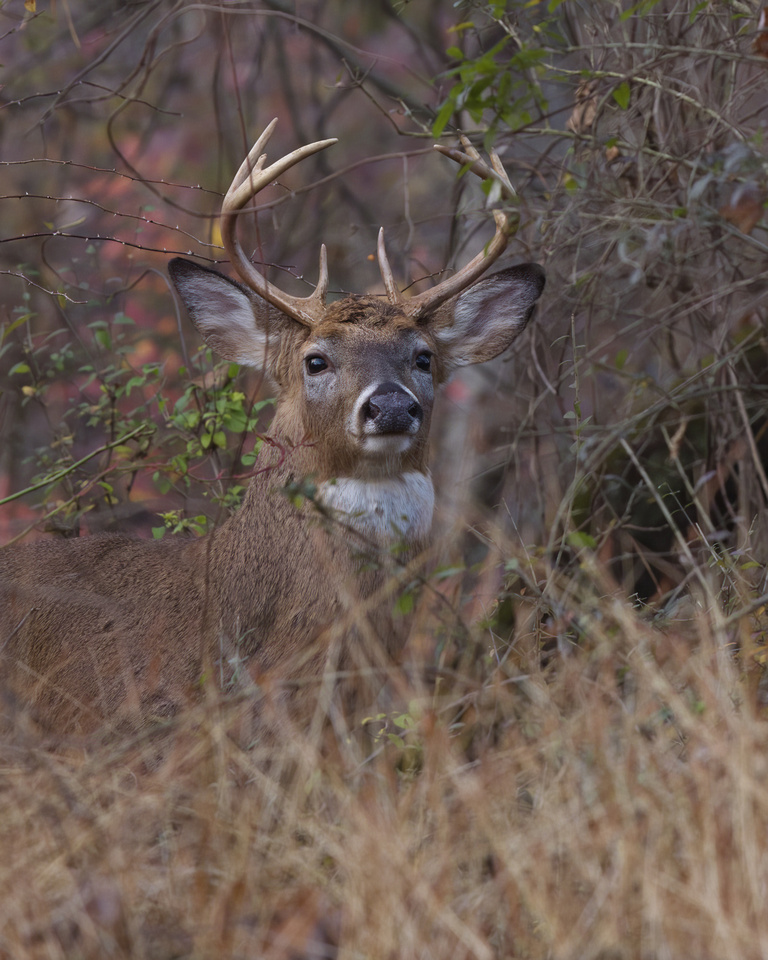 Bucks lick branches to deposit their scent to let other bucks, and doe, aware of their presence.

Here we go again!  The head position I mentioned at the beginning of this blog.  This is known to most people as a "Lip Curl".  The real name is "Flehman Response".  I've talked about this in previous blog posts so I'm going to be brief here.  Here is a concise description I found on the internet.  "What is happening is the deer is transferring air containing pheromones and other scents to the vomeronasal organ (VNO), an olfactory-chemosensory organ located between the roof of the mouth and the palate, animals can gather chemical "messages"." 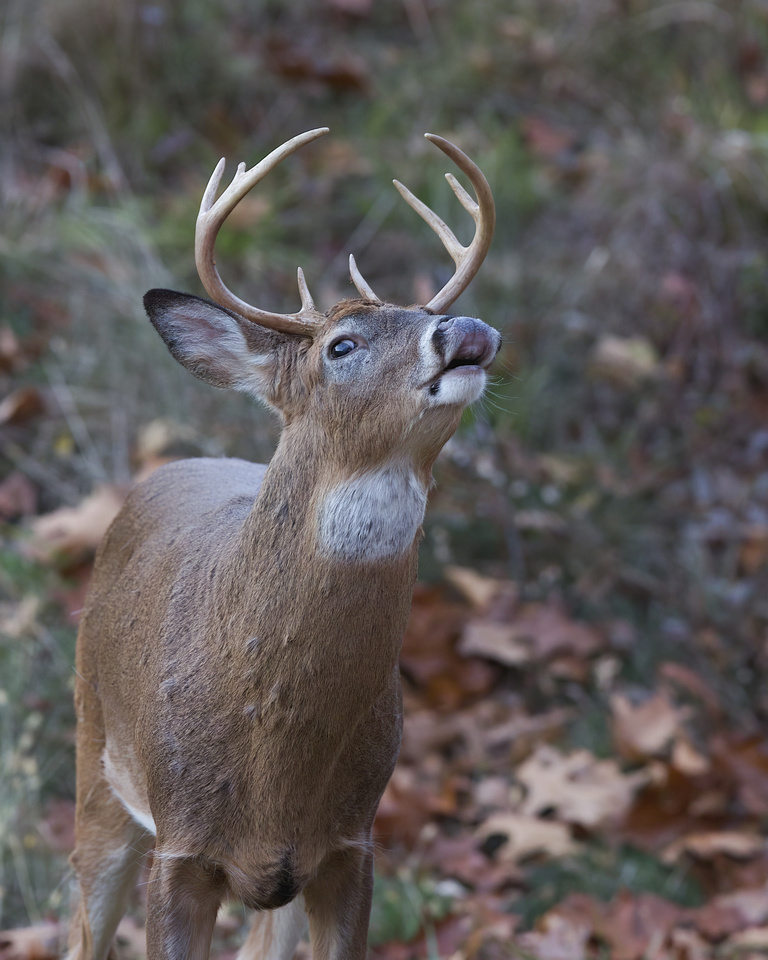 From a distance, sometimes a buck's rack doesn't look as big as it really is but then I see them up close through my camera lens.  Then I'm pretty happy to see this. 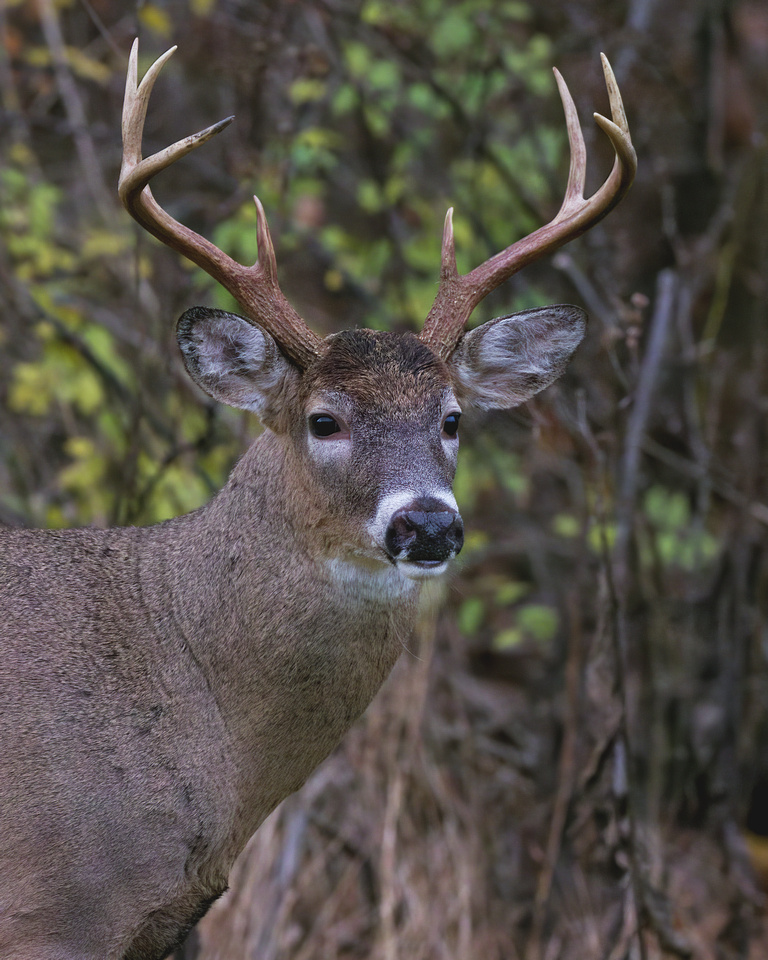 I found this smaller, 8-point buck prancing through the woods. 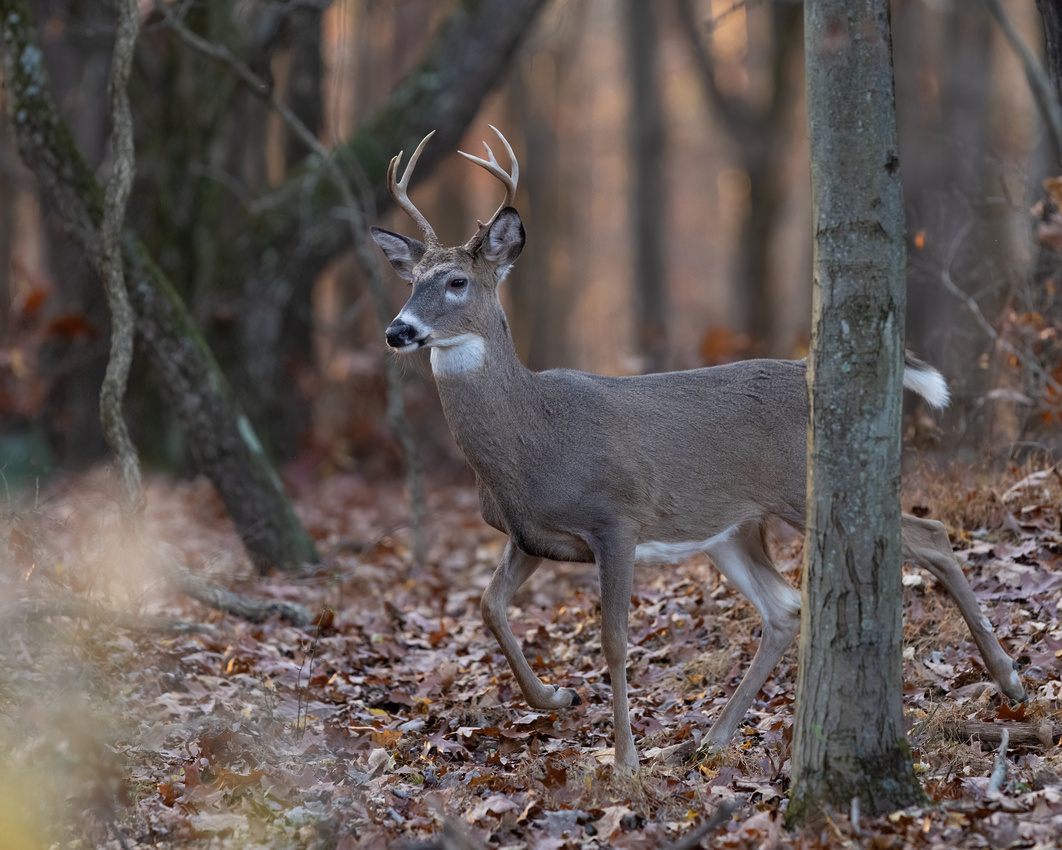 I mentioned earlier that if I see a lone doe, I'll stop to watch her because a buck might be nearby.  A total of five doe entered a field I was set up in and they were wandering through grazing on vegetation.  They were grazing from one end of the field to the other when... 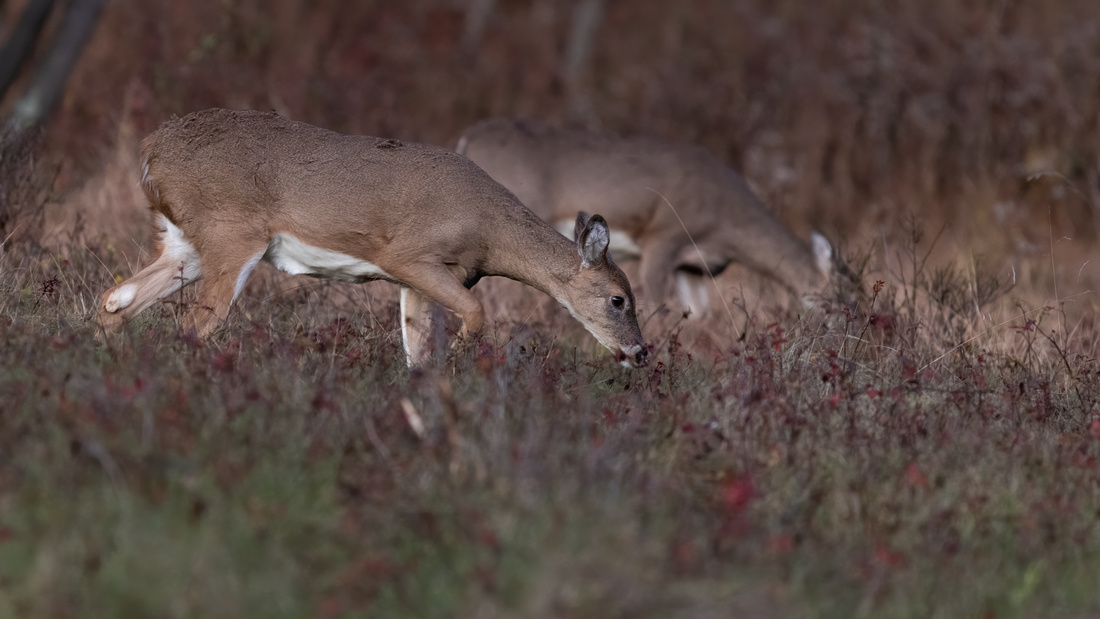 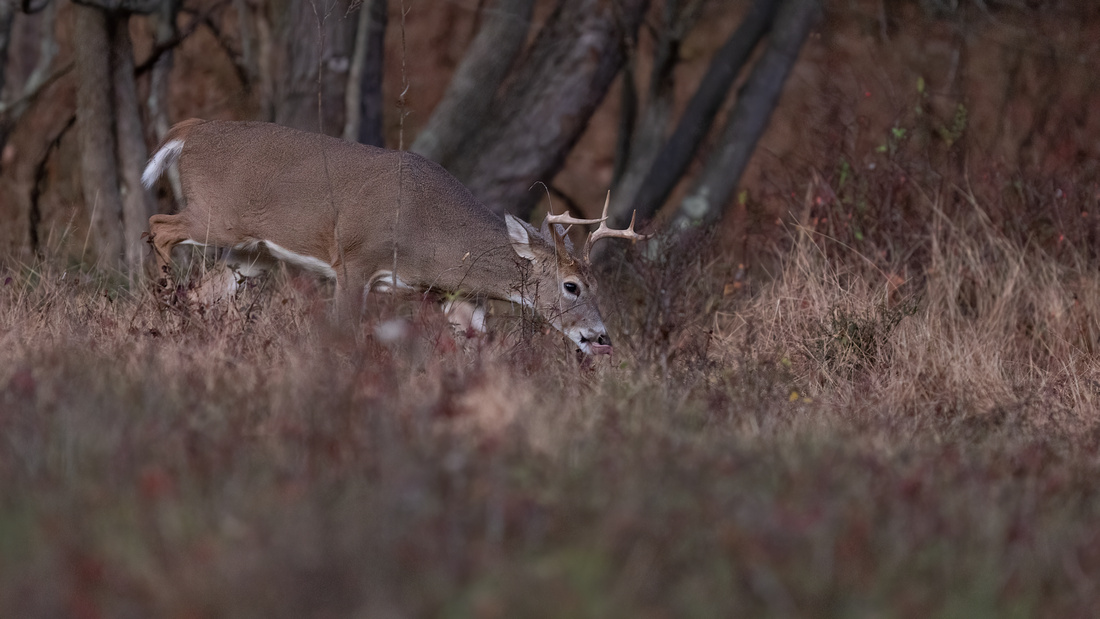 Sometimes I'm set up to watch open areas but the deer go where they want. 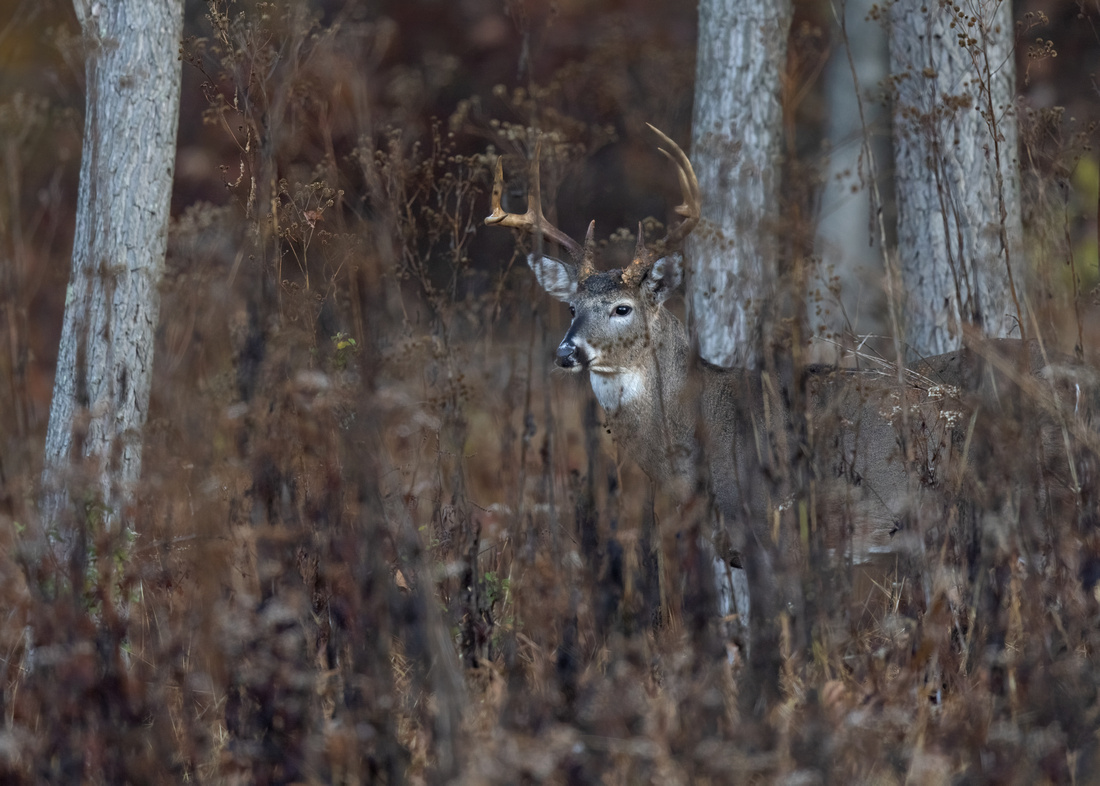 This was one of the best days I had during the 2022 rut.  It was a cold morning, deep into the rut, when I came upon two nice bucks (8-point and 10-point) trailing a couple doe.  None of them were moving much.  The does fed on leaves and ground vegetation while the bucks stood like statues guarding their potential mate.

The deer and I were located on the shady side of a large hill when the 10-point stepped into the early morning sun wrapping around the hillside.  The vapors created by his heavy breathing shot out of his nostrils with each breath.  The low, morning sunshine lit it up allowing me to create this amazing image.  I also shot video that you will be able to watch later in the blog. 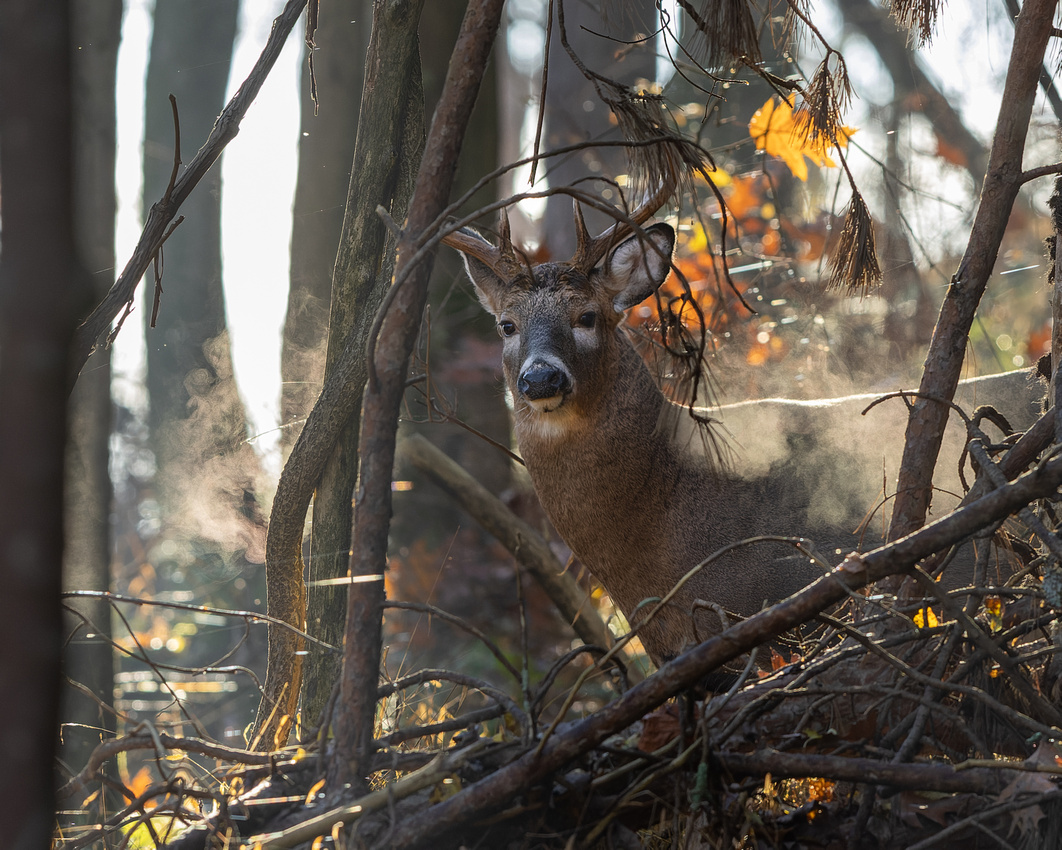 Here is another view of the previous buck while he stood in the shadow of the hillside. 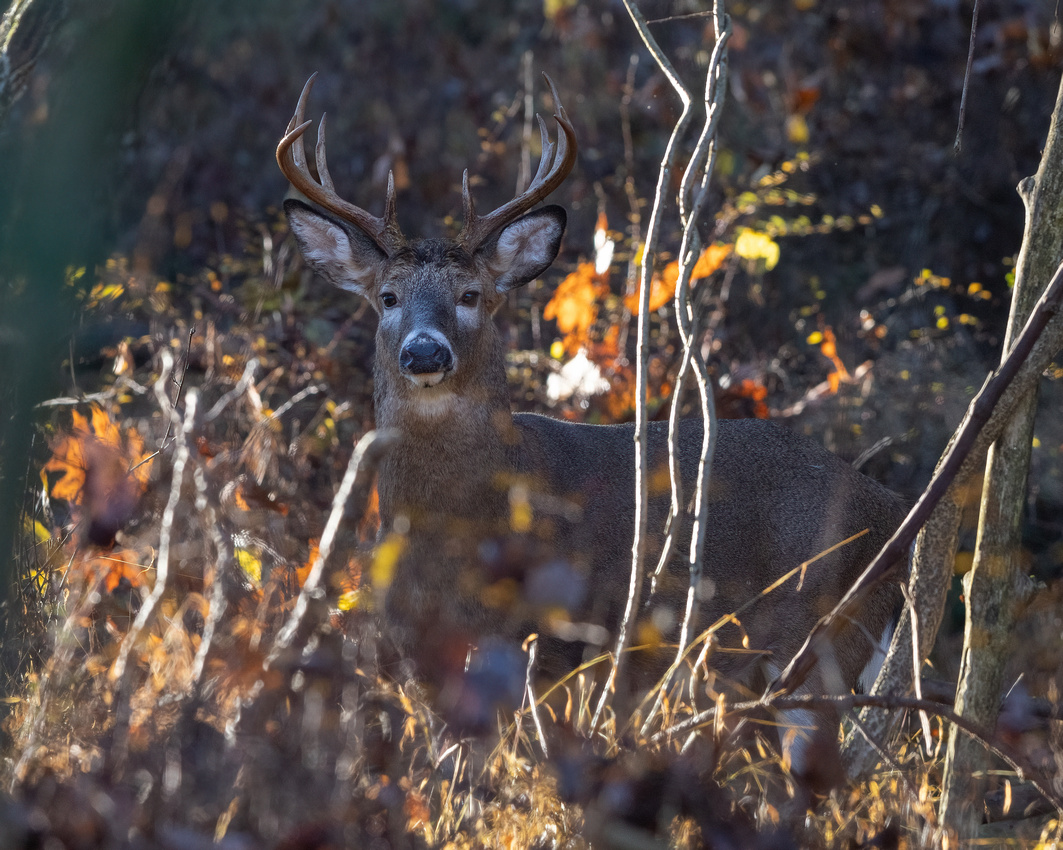 Although not as dramatic, you can see the vapors in this image as well. 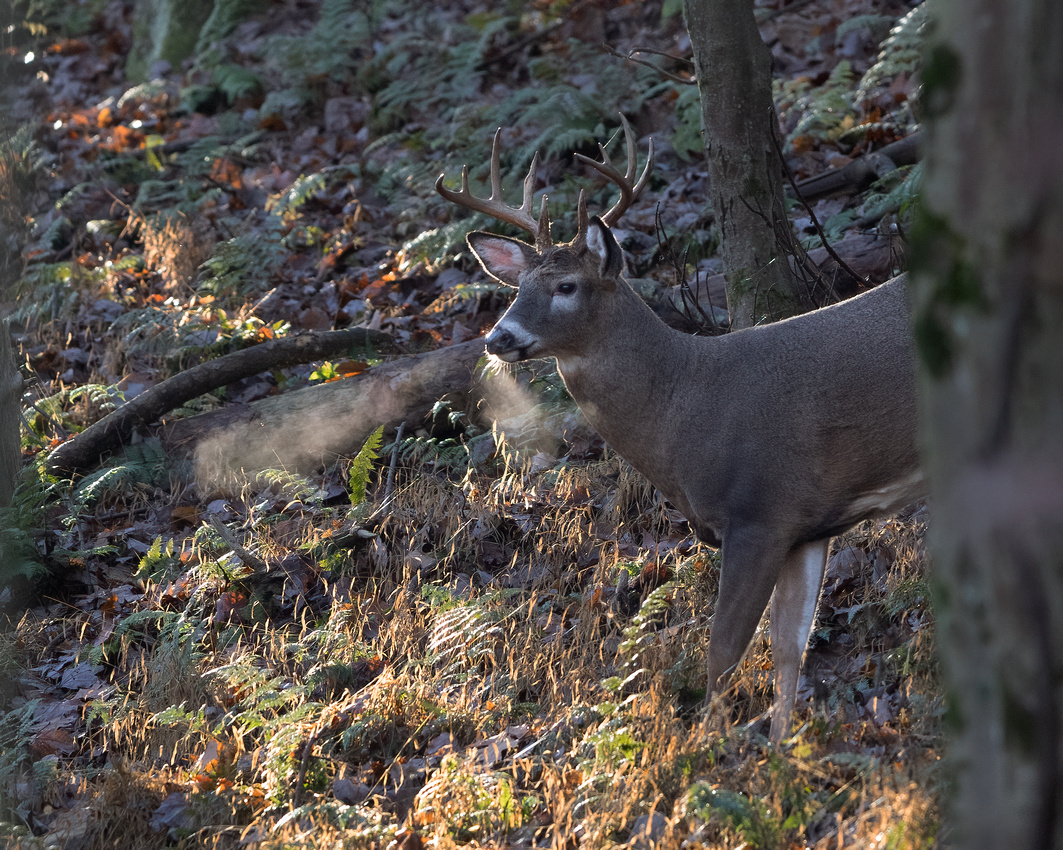 Eventually, the two bucks paths converged in the pines.  I was waiting, actually hoping, for a dominance fight.  Instead, the 8-point began biting at the neck of the 10-point.  The larger of the two seemed annoyed. 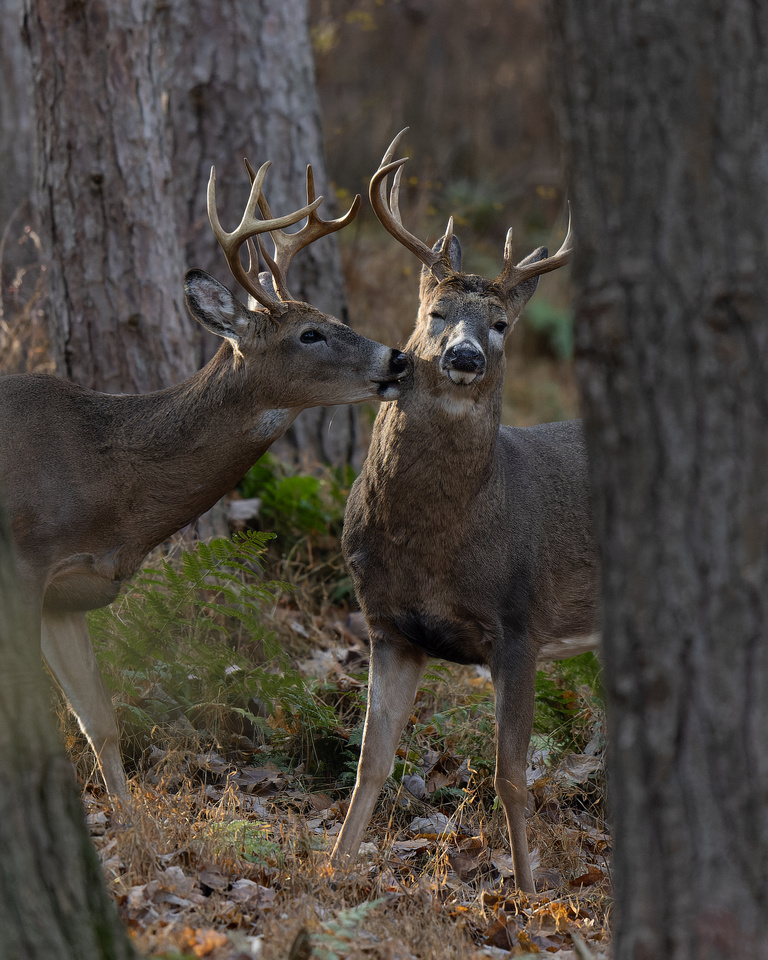 I did not know what was going to happen and since fight photos seldom show the strength of the animals, I decided to switch to video.  This video contains the vapors and the bucks in the pines encounter.

These two images were made from frames in the video.  Although they weren't pushing hard, you can see how dangerous the antlers are.

After the heated exchange, the two bucks split up and focused on the doe again. 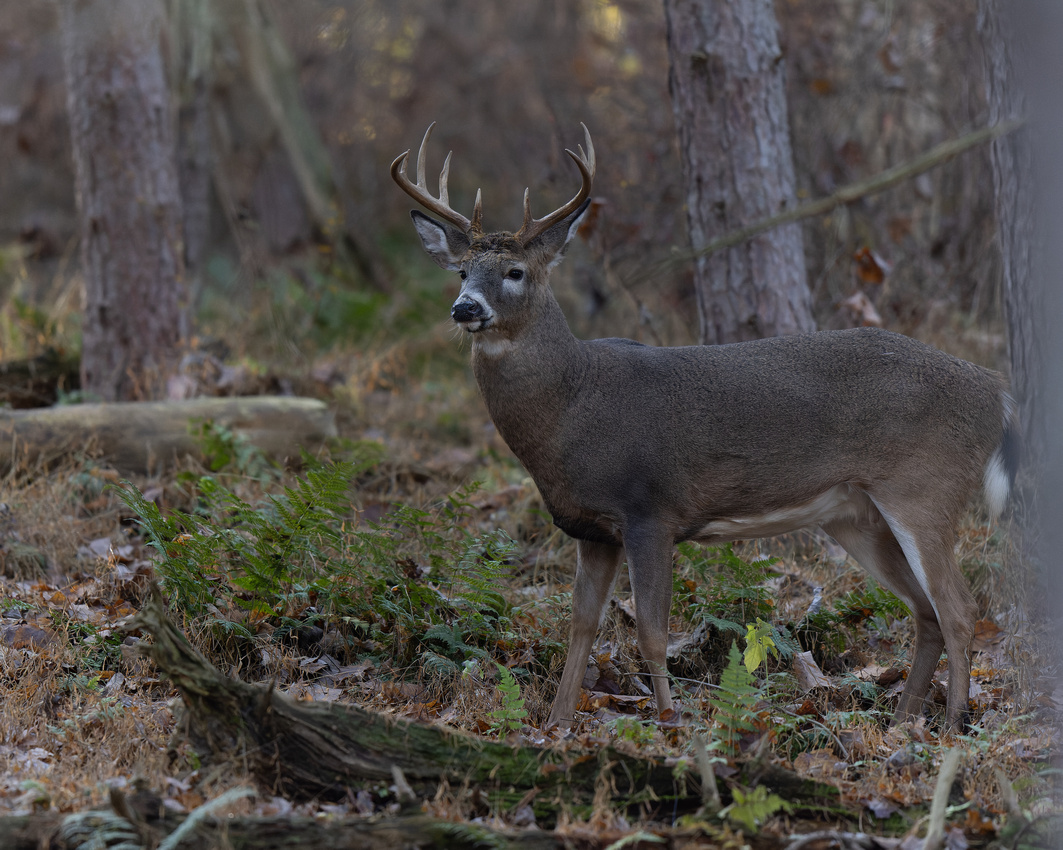 He's munching on some of the last green vegetation on the forest floor. 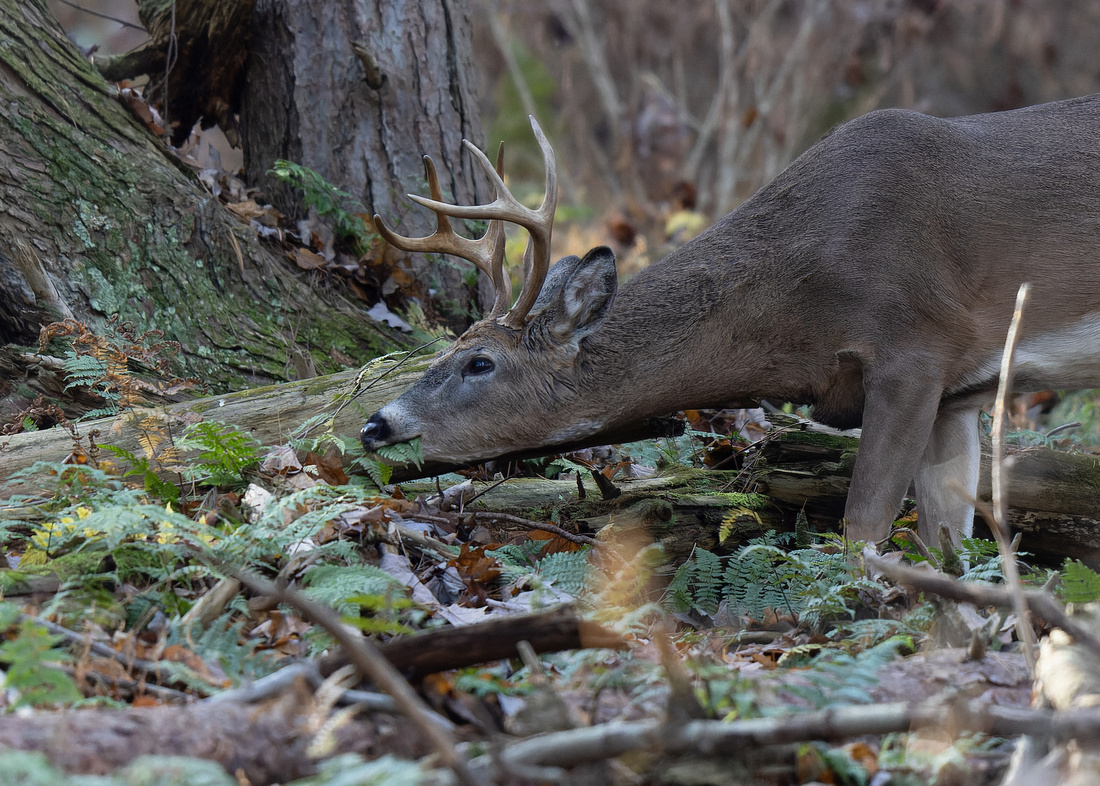 Here is one last photo before all the deer walked up the hill and out of sight. 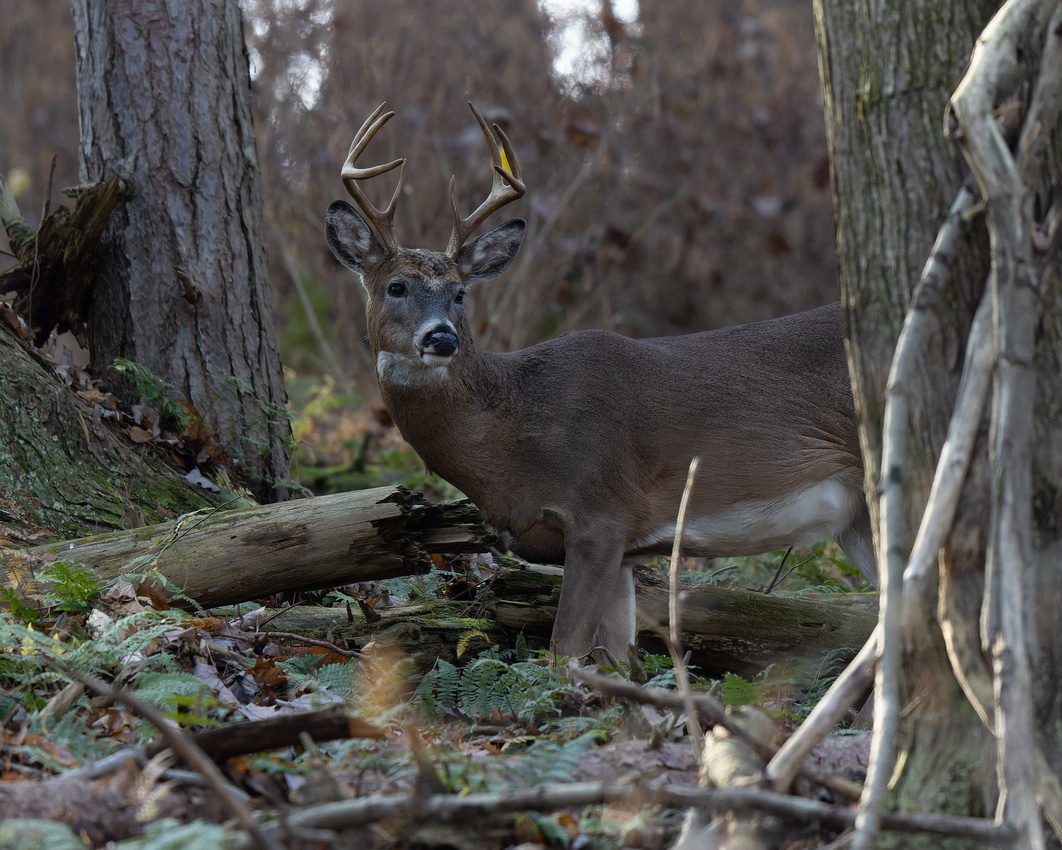 Within a week of the last series of photos we had a day of snow squalls.  After seeing a couple inches accumulate I decided to head out after work.  Because I didn't have a lot of time before darkness fell, Elena and I stayed fairly local and "hunted" from the vehicle.  I happened to see two doe laying down during a snow squall.  This one was the easiest to see. 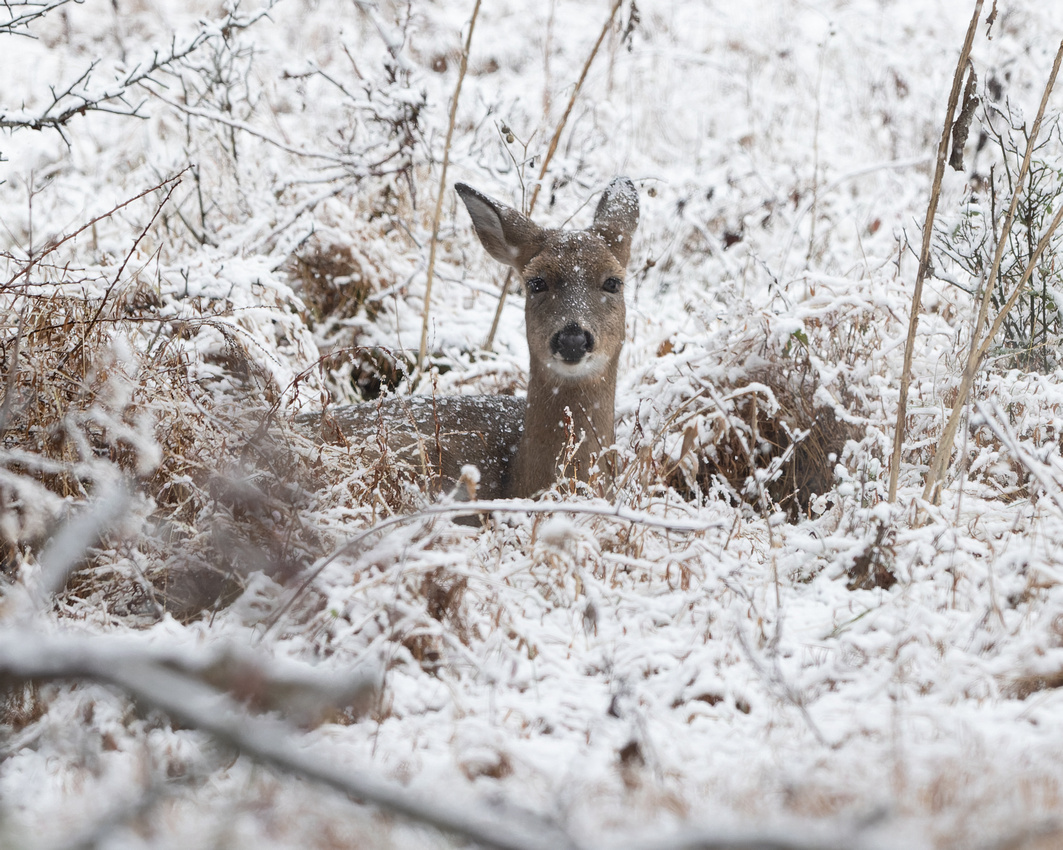 It's been a few years since I found a buck this wide. 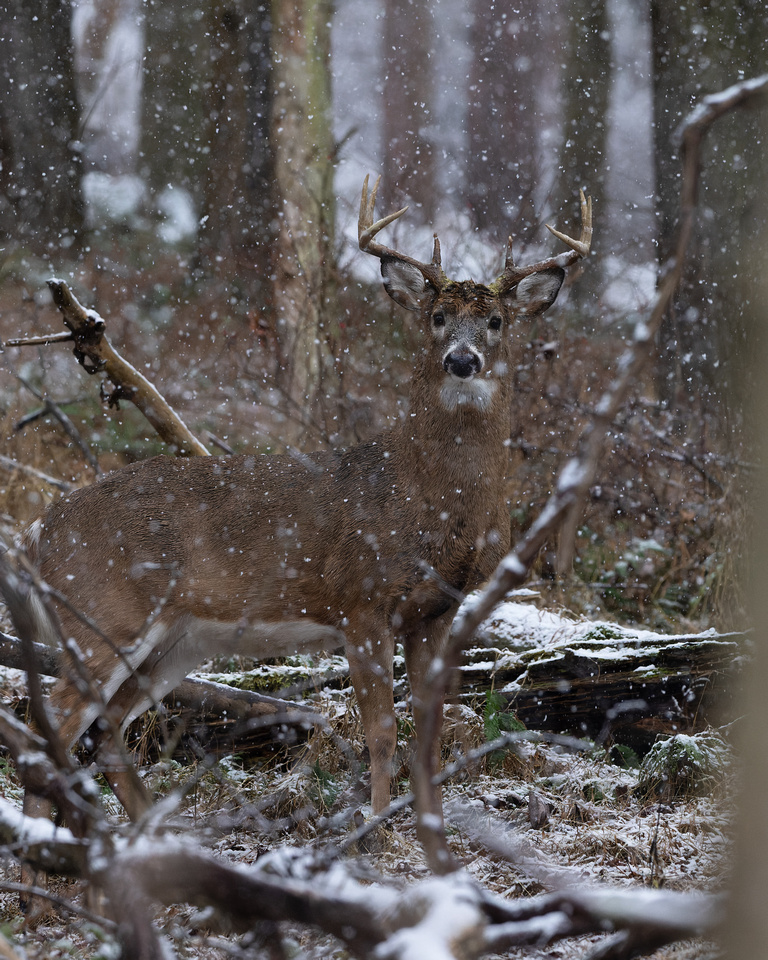 Of course, I probably wouldn't have these photos of him if he weren't on the scent of a doe.  While walking one way... 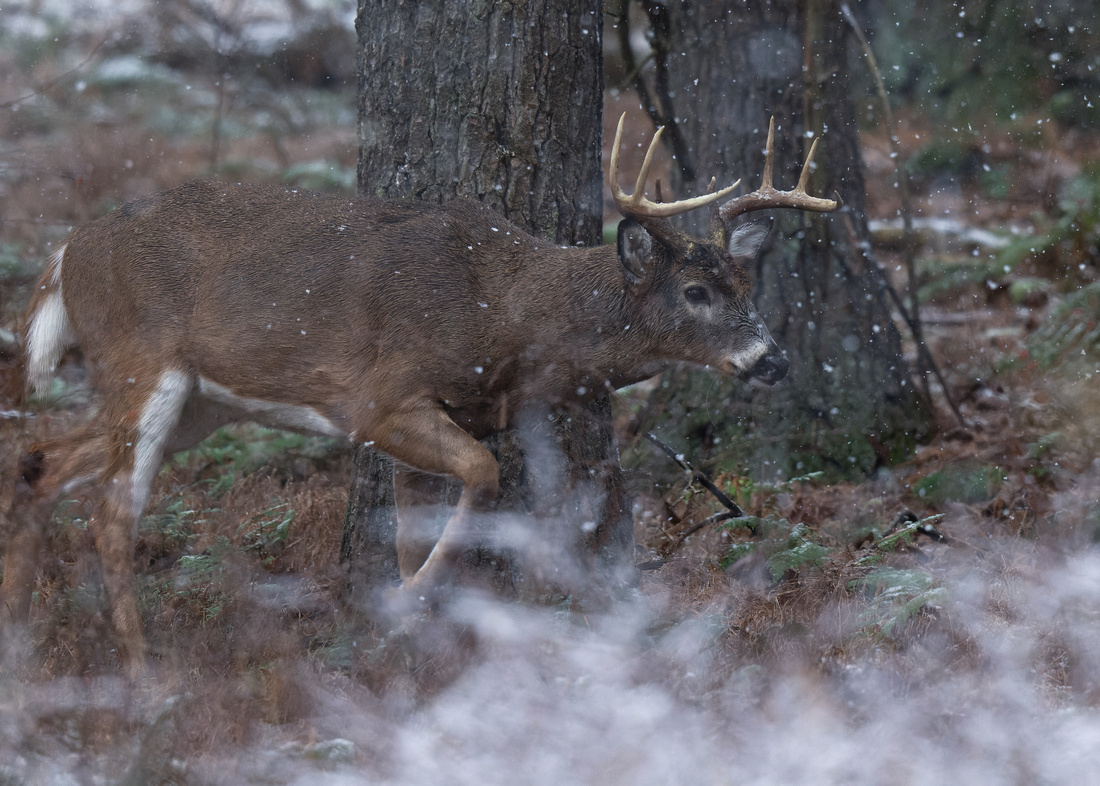 he suddenly stopped and shifted his attention in the other direction. 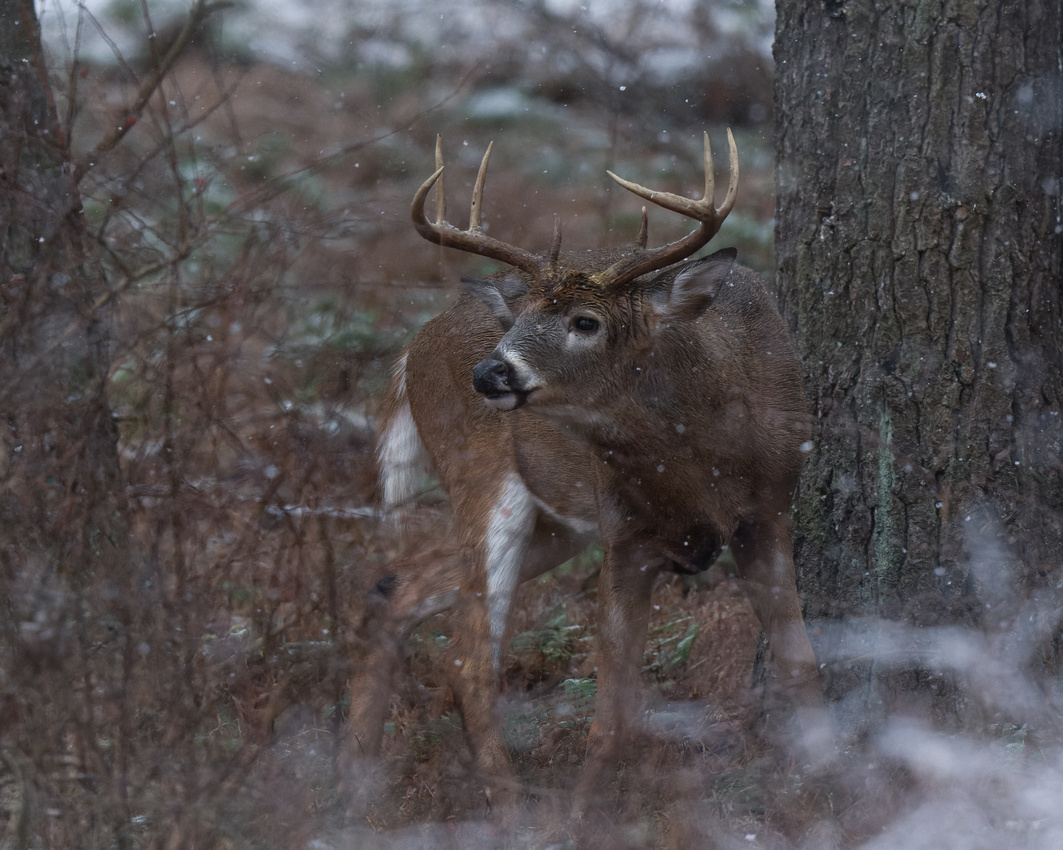 Here is a closeup of another buck with snow accumulating on his body and antlers. 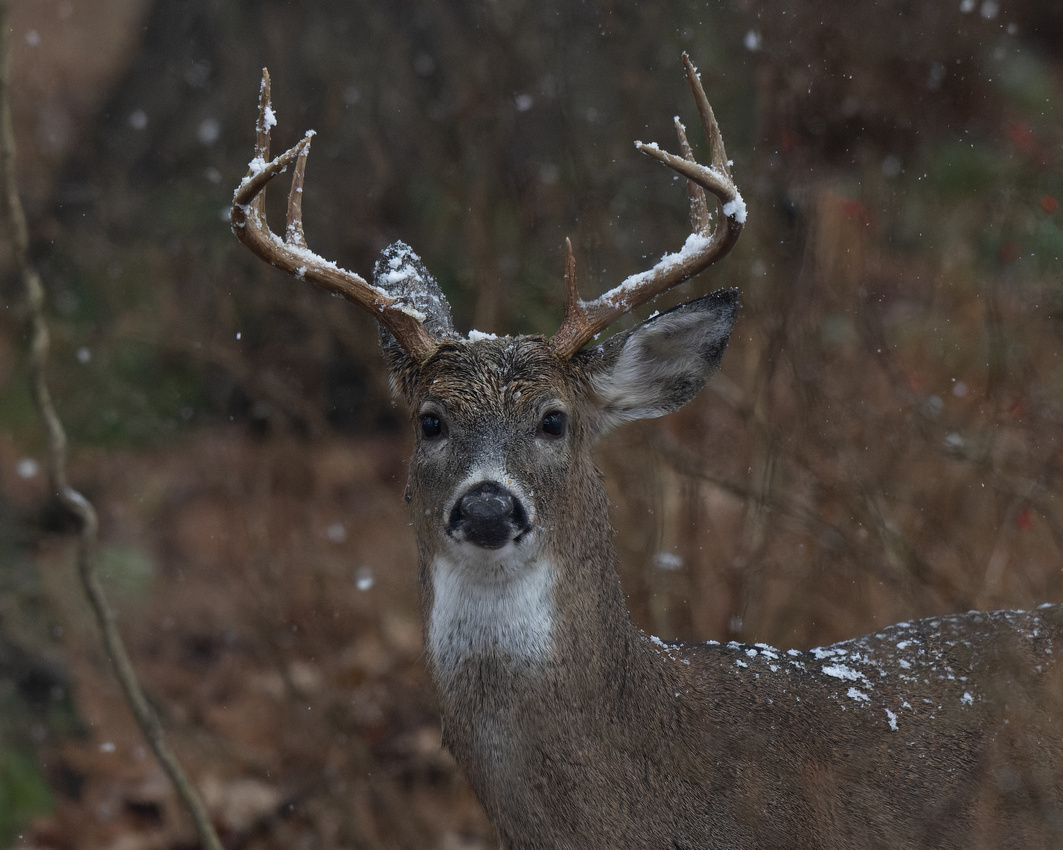 Here is a video I put together of the "snow day" deer.

Another White-tailed Deer rut season is in the books.  I hope you enjoyed the photos, videos, and my commentary about each photo.