Living in Pennsylvania has many benefits related to wildlife photography.  There are a lot of opportunities if you are willing to put in the time and effort to locate them.  One rare find is the nest of a Sandhill Crane.

Until recent years, Sandhill Crane were seldom found in Western Pennsylvania.  Today, I often see flocks of 2 to 30 all year round.  I watch wetlands in the springtime in hopes of finding an active nest but our swamps and marshes are rather dense and not easy to navigate so, to prevent endangering wildlife, I choose not to disturb those areas.

In June, evidence of breeding Sandhill Cranes are seen as they navigate sprouting corn fields with their young, called a colt. 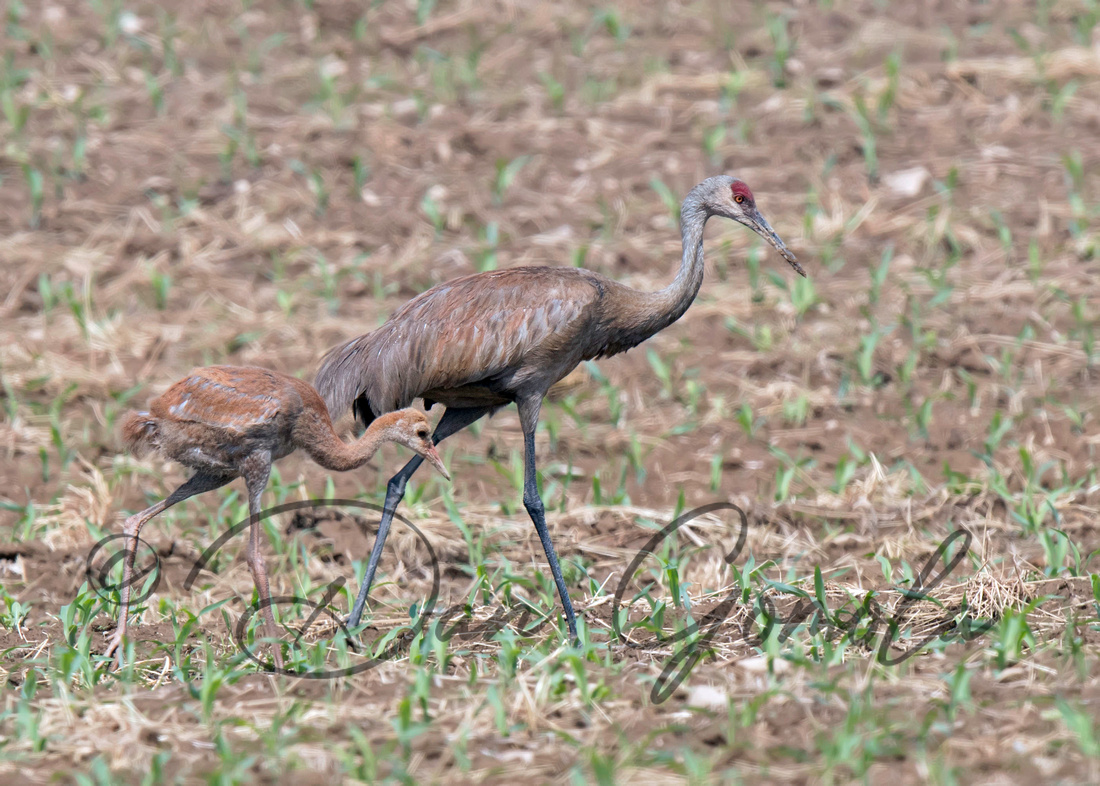 The Sandhill Crane exhibits extravagant dancing behavior, including bowing, jumping, running, stick or grass tossing and wing-flapping.  While this behavior is a form of courtship, it is also performed by cranes of all ages, even outside of the breeding season.  Sandhill Cranes mate for life so this behavior is thought to strengthen the pair's bond.  On a few occasions, I have been fortunate to witness them performing.

This year, we were fortunate to find a nesting Sandhill Crane in an area that could be photographed from a distance of 100 yards, to avoid disturbing any animals.  The remaining photos and videos were made during events that occurred at this nest site this year.

Below is the female Sandhill Crane we found on her nest incubating eggs. It was a special treat for me when she stood to roll her eggs. 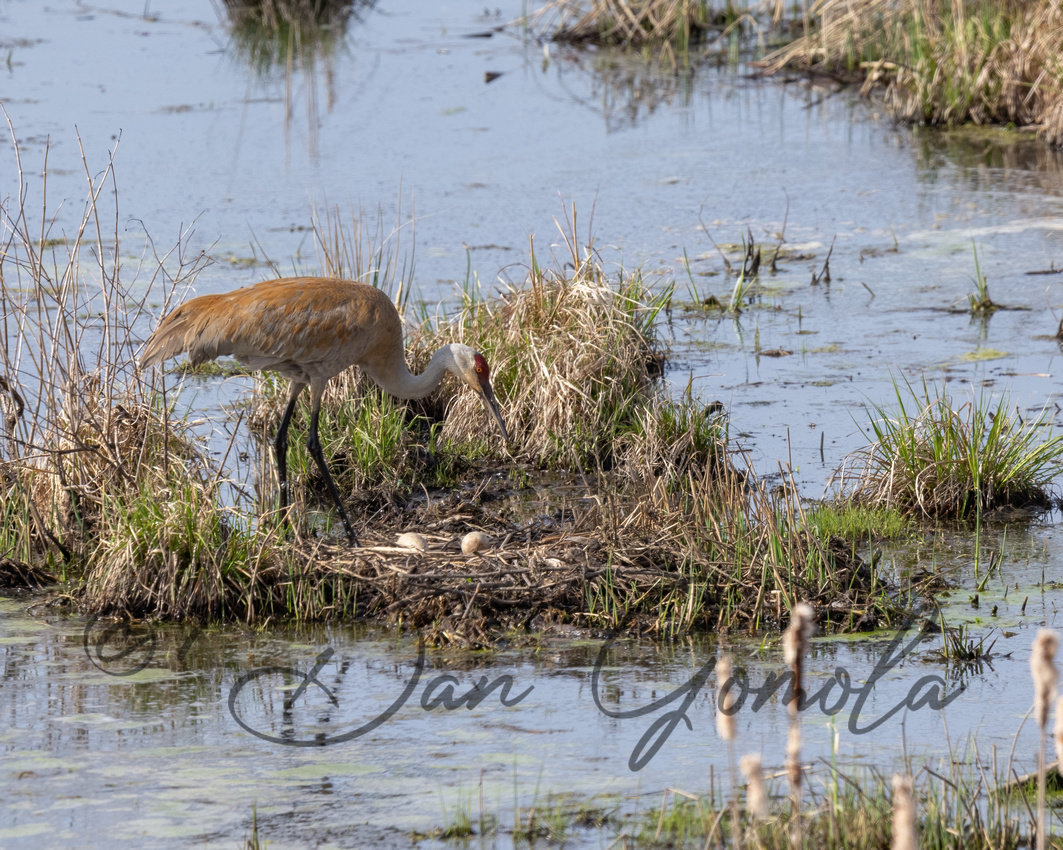 Before she could lay back down, she became concerned about a Canada Goose that was swimming near the nest.  She walked toward the foraging goose trying to keep it a safe distance from her eggs.  She even chased it when her warnings were ignored. After leaving the nest three or four times to warn the goose, she began to walk out into the swamp, away from the nest.  As I watched, I began talking to myself saying "Where are you going mama?  That goose is still here".

I got my answer in less than a minute.  I didn't realize it at the time but the male Sandhill Crane was only a short distance away.  He came in screaming mad and chased the goose. At one point the crane had a mouthful of goose feathers as he bit at its back.  I was so caught up in the action, I forgot to press record to catch it all on video. 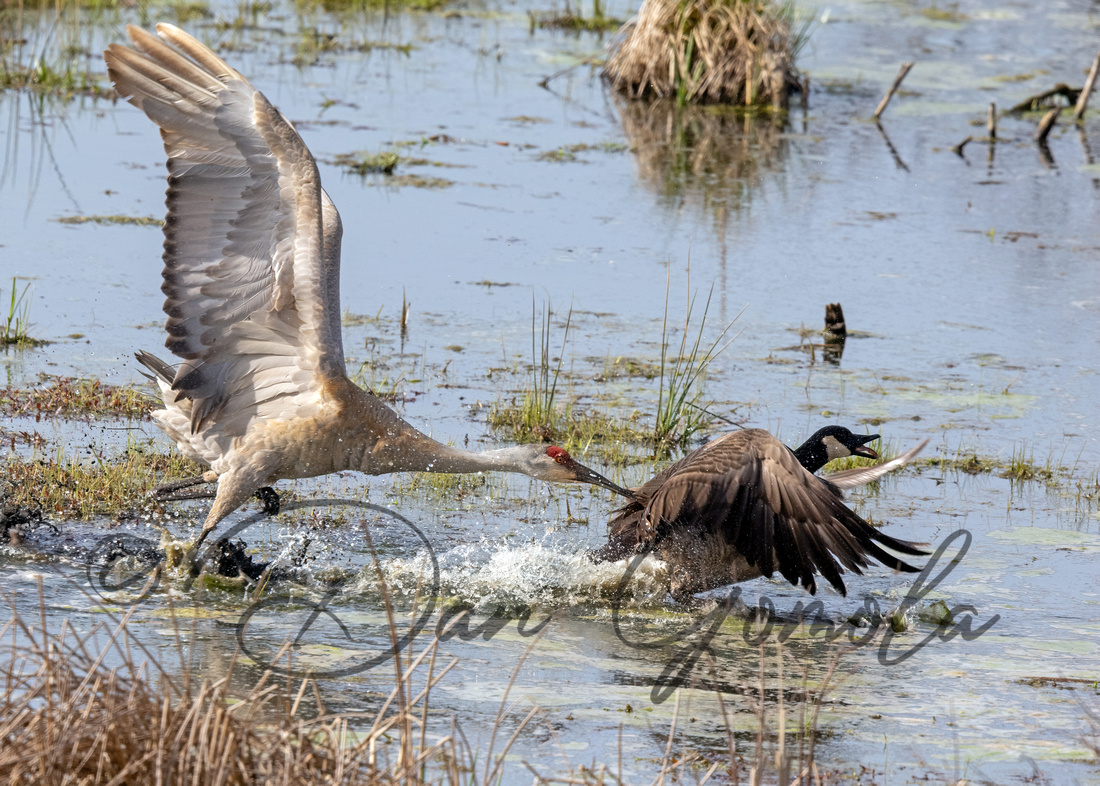 Once the goose was far enough away, the male returned to the nest and the pair vocalized for quite some time. 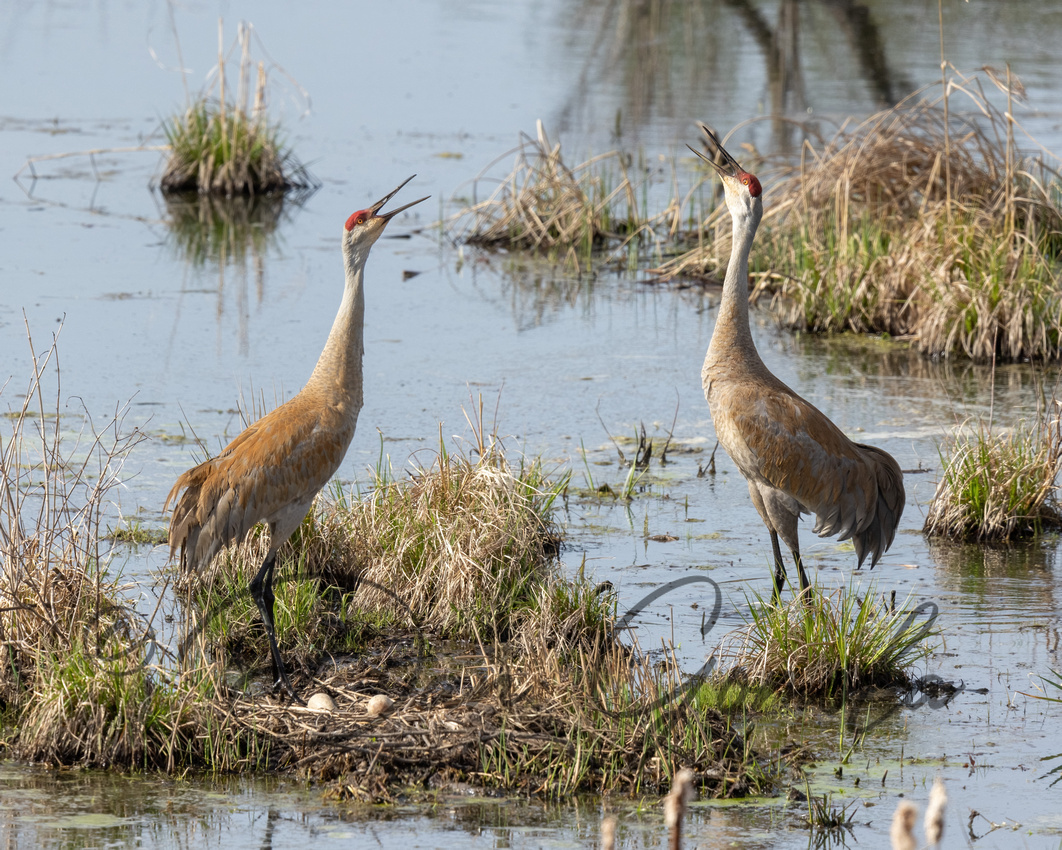 I recorded the next few minutes of activity.  I wish I knew what they were saying to each other.  It's all Greek to me!

I wasn't sure when these two eggs were laid but I knew, with a 28-30 day incubation period, they would hatch in early May.  There are several concerns for marsh or swamp nesting birds.  Three that come to mind are: Would a predator destroy the eggs?  Will heavy spring rains flood the nest?  Would the eggs be viable?

My photography friend, Jake Dingel, and I checked on the nest at different times hoping for good news.  It was on a rainy Saturday morning when I received a phone call from Jake to let me know the eggs hatched.  I quickly gathered my gear and Elena and I made the trip to the nest.

After setting up, we waited.  Between rain showers, I saw some movement from under mom's wing and finally a little colt popped out. 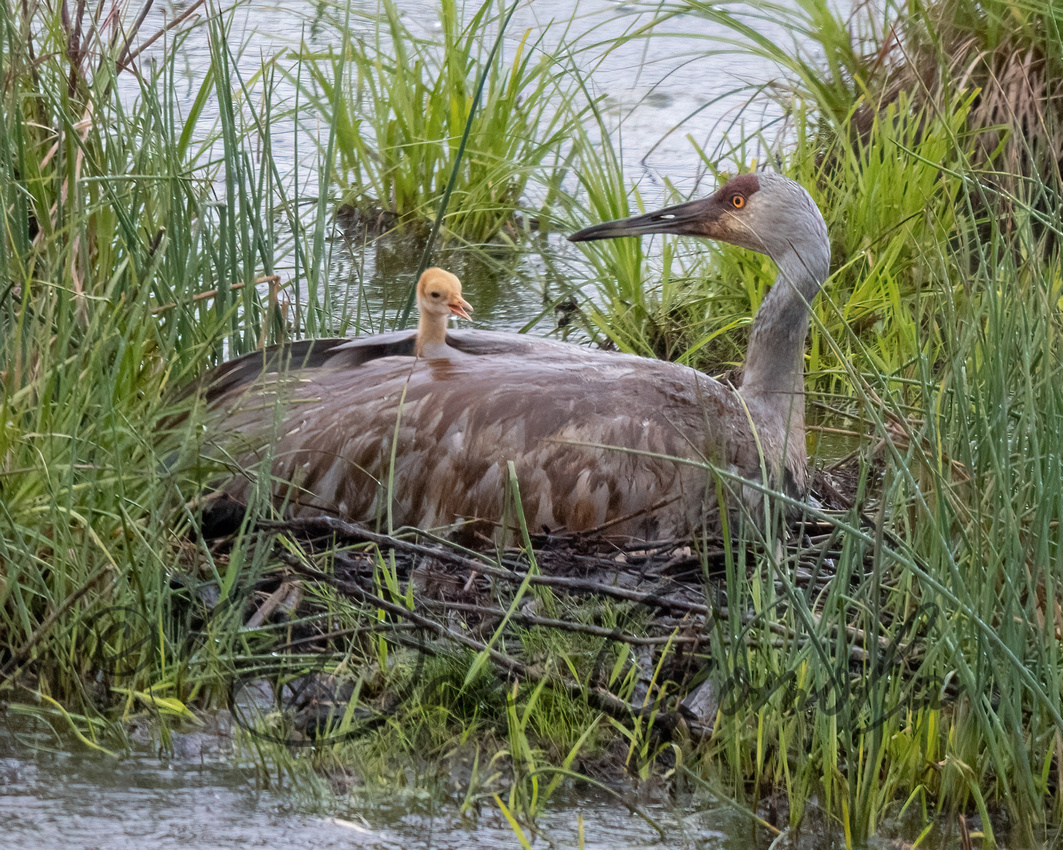 I planned to stay in the area all day because, once the eggs hatch, the young colts leave the nest within 24 hours and follow their parents into the marsh.  I didn't want to miss their first venture into the "real world". 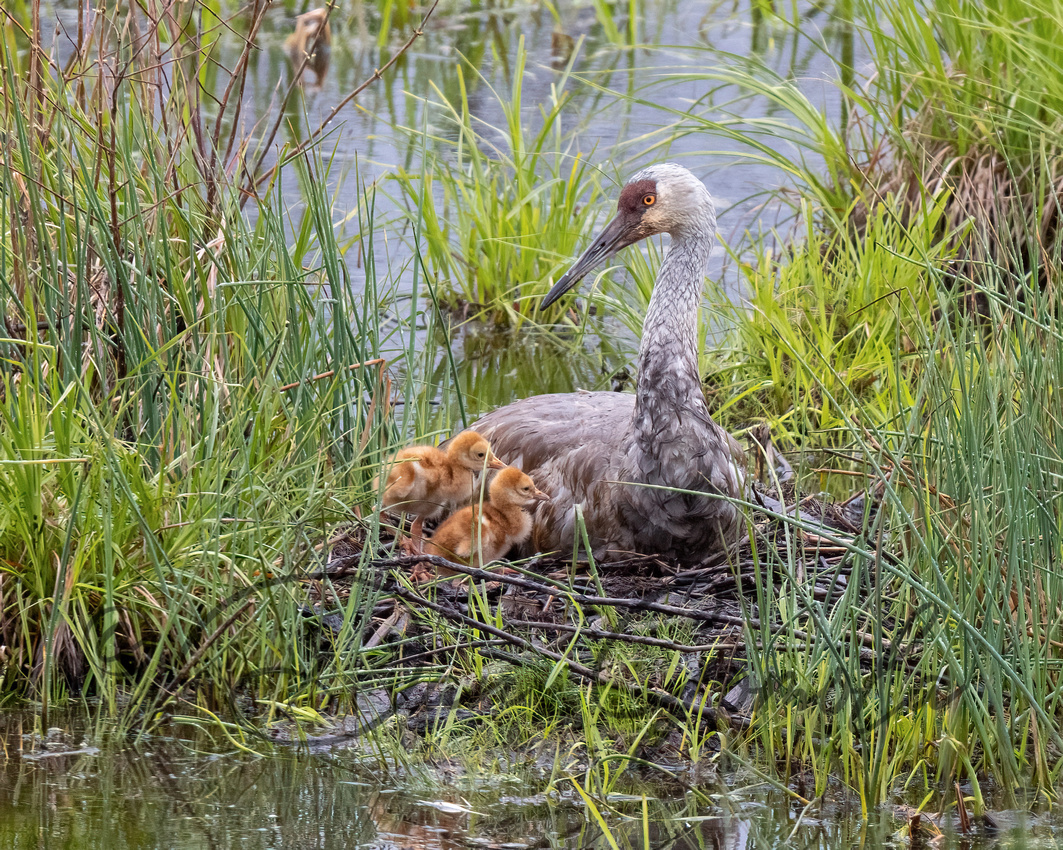 In this video, mom is walking around the nest probing for food as the little ones explore. Toward the end, you will notice the rain began to fall once again.  In order to protect her young, she lays down and the nestlings run for cover under her wing.

After the rain stopped, mama began to lure the colts off the nest. 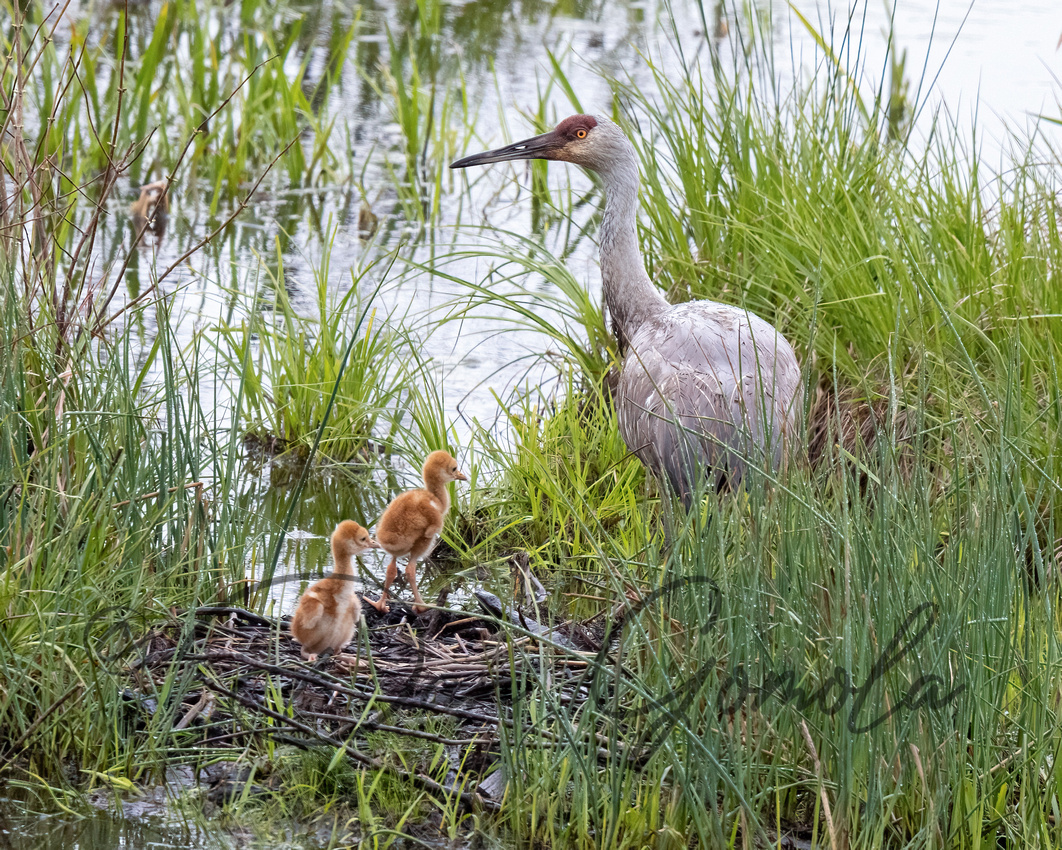 She managed to get one of them to follow her but the other one was a little more hesitant. 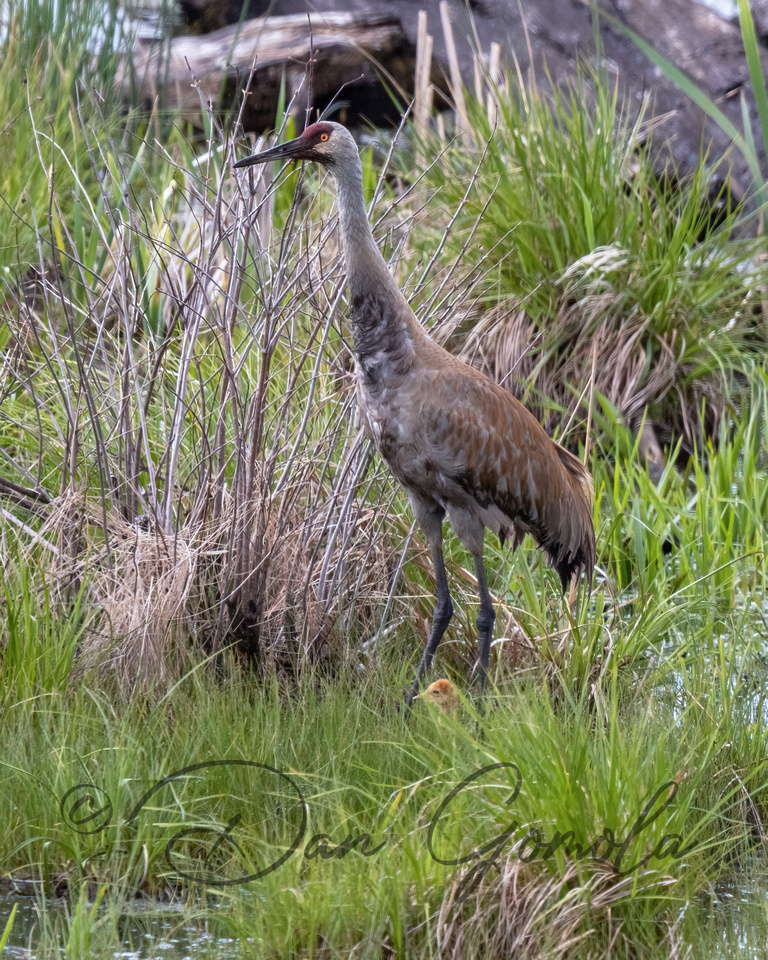 The parents and one colt were deeper in the swamp, about 25 yards away.  The male called, trying to coax the lone nestling to follow.  The nestling called back several times but, despite the adult's encouragement, it stayed on the nest alone. 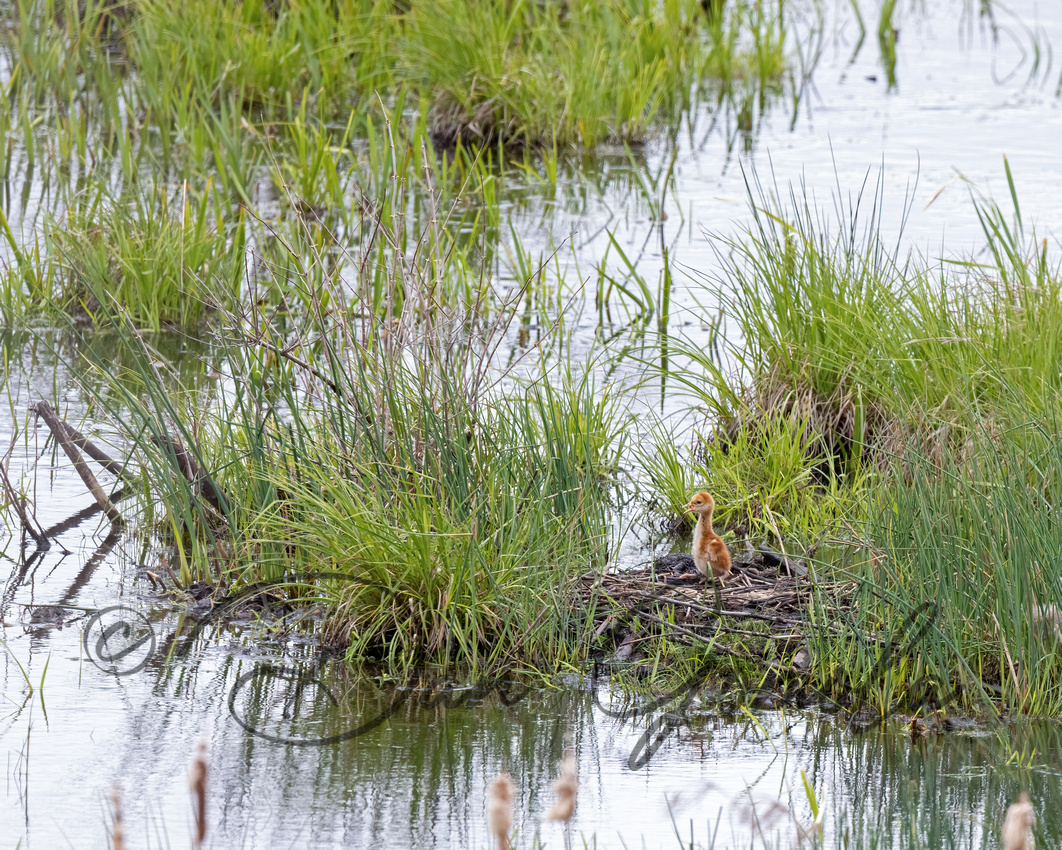 This video shows the adult cranes and one of the colts out in the marsh, occasionally calling for the other colt to follow.  Mom took time to feed the colt while dad paced back and forth waiting.

Finally, the second colt stepped off the nest, into the water, and began its first journey into the marsh.  While stumbling over the smallest of branches and weeds, it met up with dad.  You can see it in the lower right of the frame in the next photo. 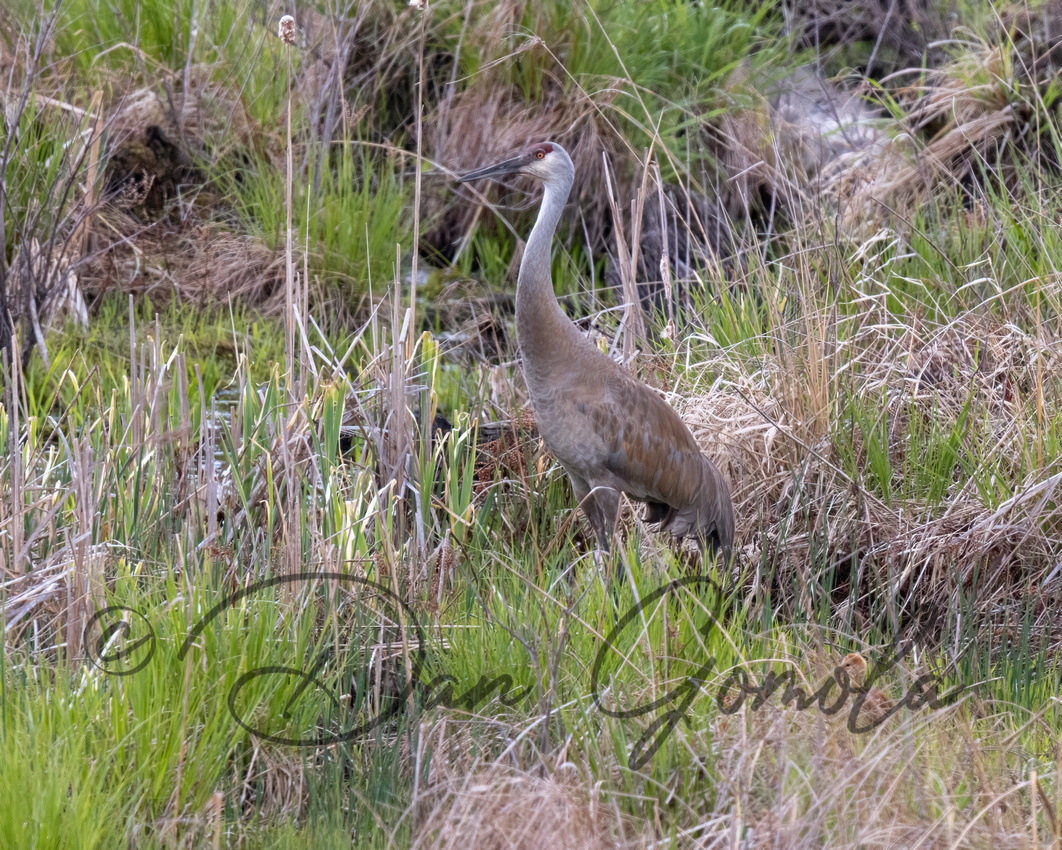 This pair of colts will stay with the parents for the next 9 or 10 months.  They will become independent about the same time the next breeding season begins.

As of this writing, I have returned a few times to look for the growing colts but have not seen them yet.  I'll keep looking and hoping to find this small family before the corn and field grass become too high.