Tuesday morning the sun rose in a cloudless sky and we could feel the heat building.  Tom and I decided to head back into the valley we were in the previous evening to look for the sow with four cubs from last night.  I dropped Tom off about 1/4 mile away from where I was entering the forest.  He was going to take a different route into the valley and we would meet up where we were the night before.

I reached the meadow in the valley and didn't see Tom.  Not long afterwards, he called to me to come his way.  He found the sow and four cubs.  They were laying down behind a log halfway up the next mountainside and appeared to have bedded there all night.  There were a few other photographers there as well.

As the sow began to stir, she rested her head on the log. 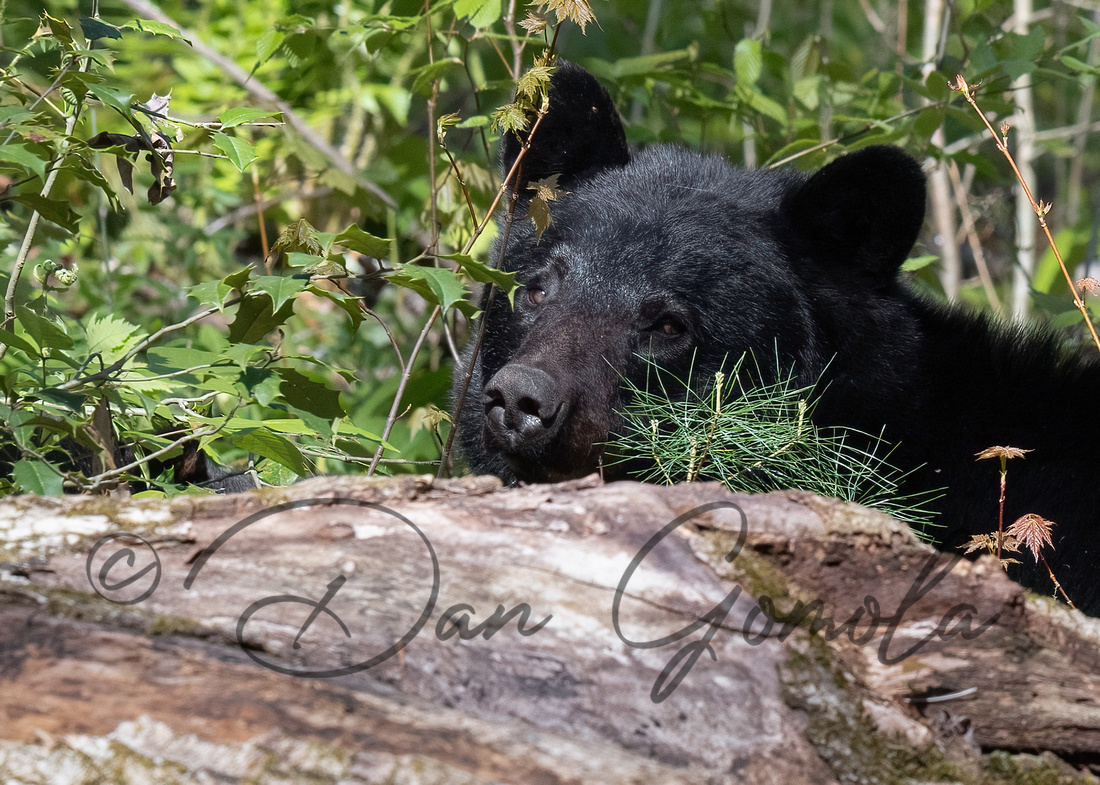 The cubs were active but stayed out of site.  Finally, a cub that was snuggled up against mom decided to come out. 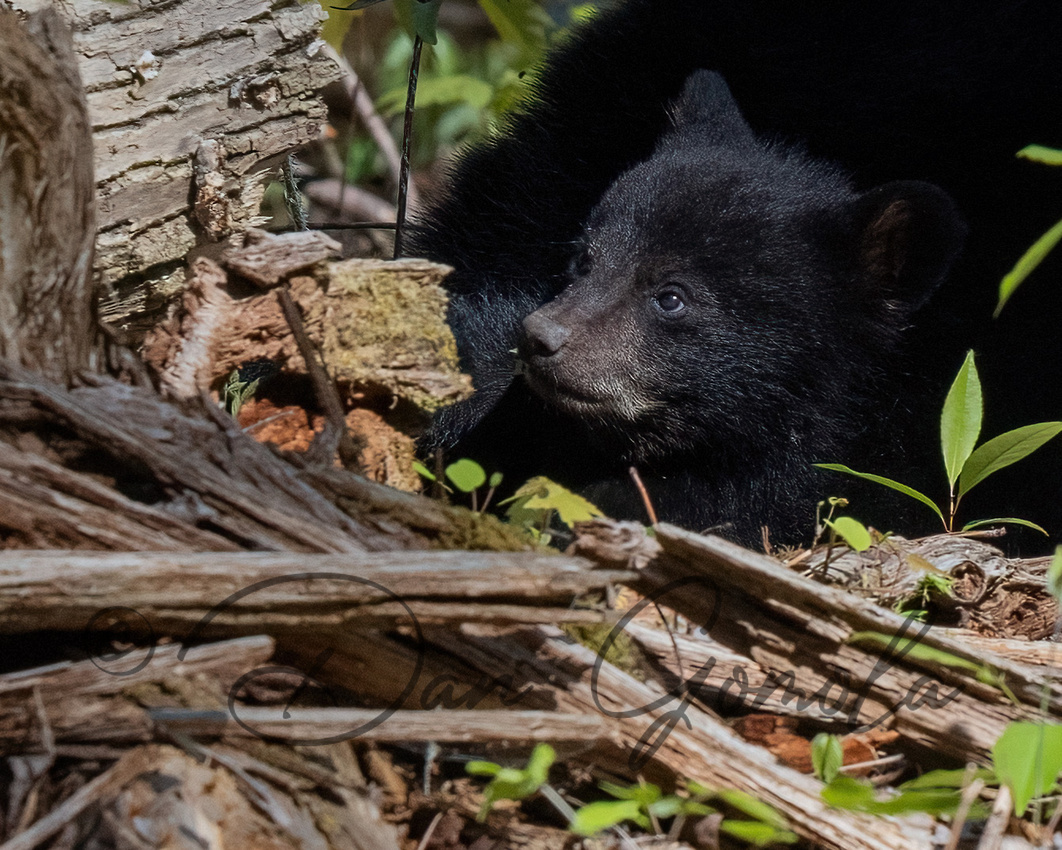 It wasn't long after we got there the sow got up and began to walk down the hill to the same place we saw her last night.   She fed on leaves and grasses along the way. 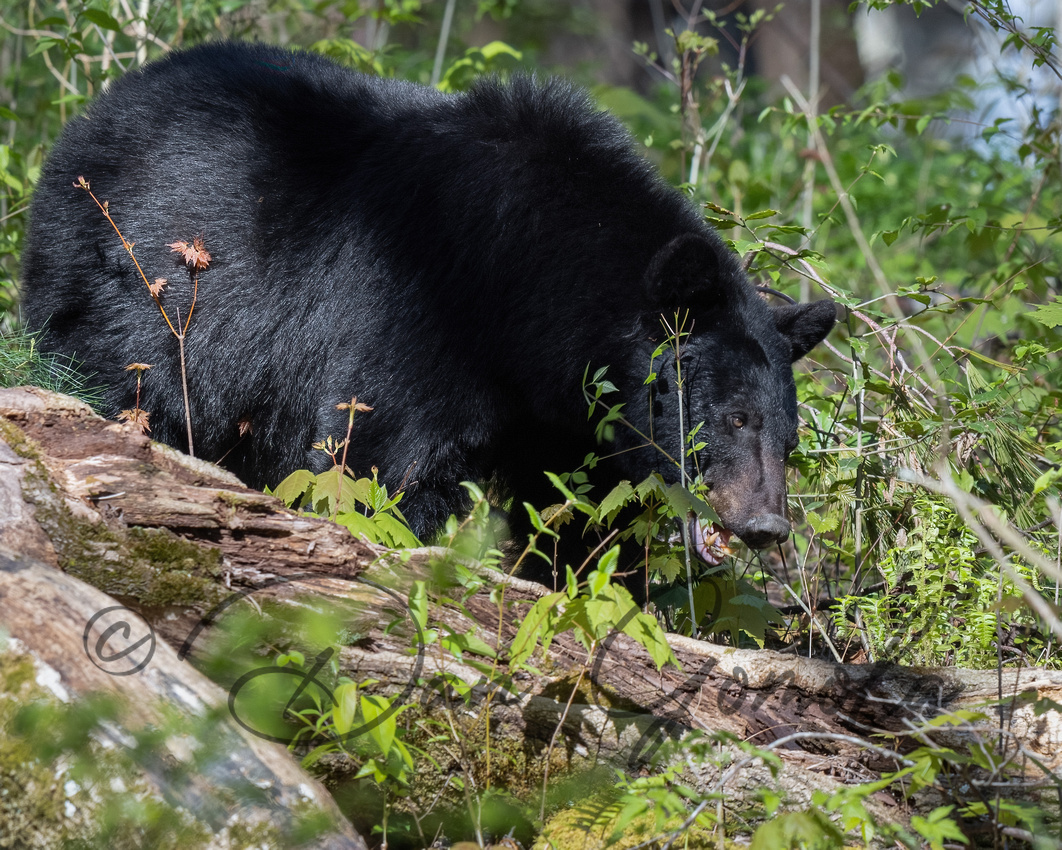 That's when the cubs decided they should follow mom and began to show themselves.  I was hoping mom would have stayed on the hill longer because the logs would have made a great playground to photograph the cubs. Two of her cubs were staying close as they meandered down the hill. 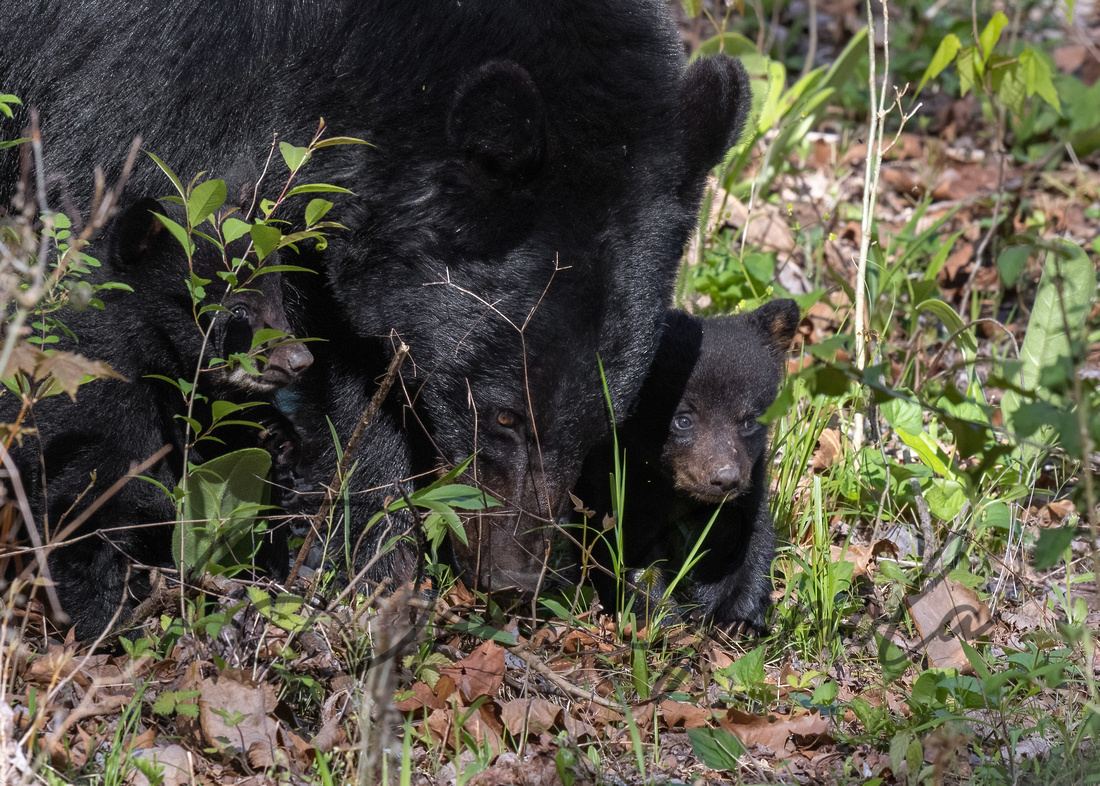 Once they got to the bottom of the hill, mom ended up in the same cluttered spot as the night before.  Meanwhile, the cubs played in the trees. 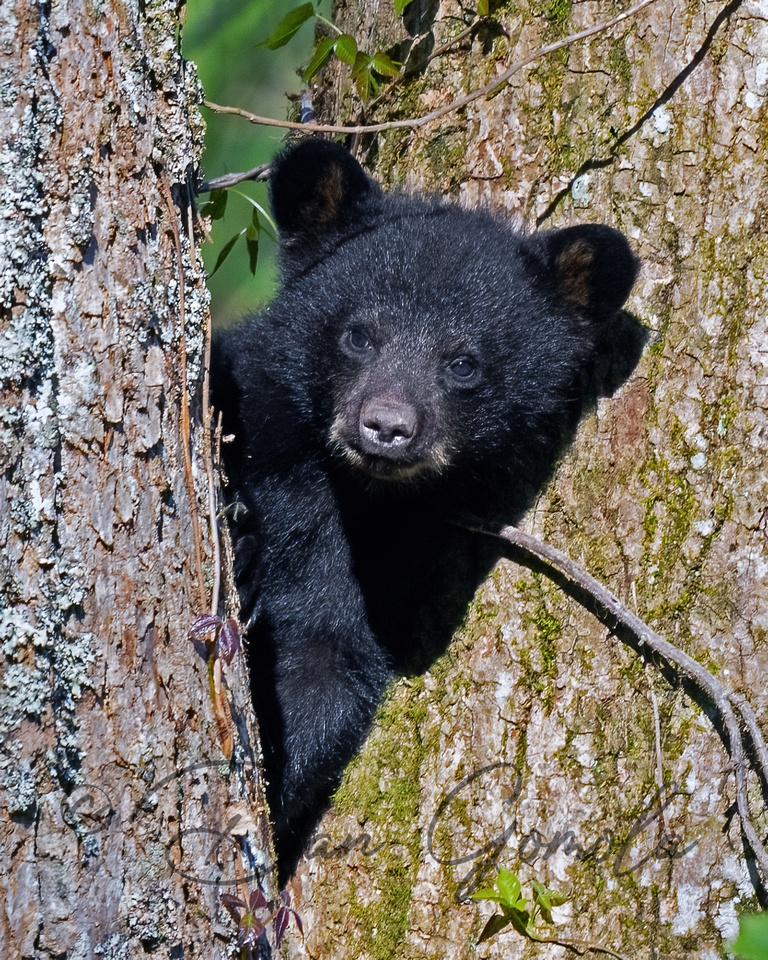 One thing I learned about bear cubs is they are chewers.  I think any broken limb in their path is an attention getter. 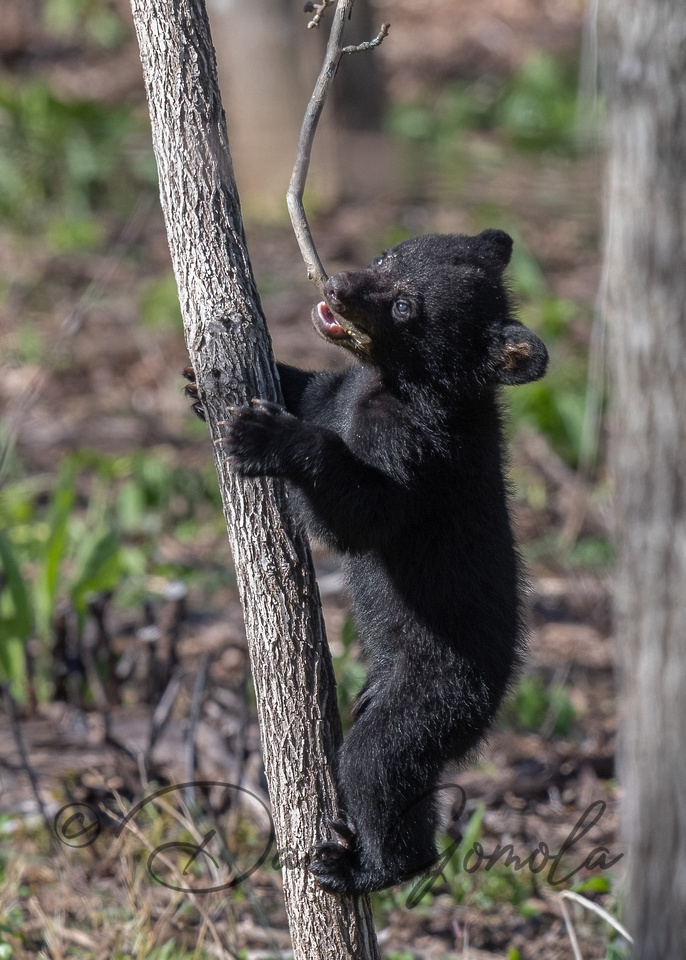 Low and behold, the sow ventured into an open meadow between the hillside and the dry creek bed.  At least I got a clean look at her before she continued into more brambles.

She eventually called her cubs and all five disappeared into a wall of greenery.  We waited for a while but gave up on seeing them again this morning.  Besides, the sun was high and hot.  Time to get out of the woods.

We made it back to the vehicle and then we saw our first "Bear Jam".  A bear jam is created when there is a bear in view from the road and everyone stops to take photos or they just sit there, in the middle of the road, and hold up traffic.  People are not supposed to stop in the middle of the road and hold up traffic but, let's face it, a lot of people don't care about the people behind them.  I get it, most people don't get to see wildlife as often as a wildlife photographer does.  It is still frustrating to be sitting when we should be moving.  Tom said I taught him some new words that week.  He was kidding of course.  He already knew them all.

Anyway, Cades Cove is a free destination.  You do not need to have a park pass to enter so there are usually a lot of people on the roads and exploring historical attractions.  Bear Jams are to be expected so that is why I like to spend most of my time in the woods, away from everyone. 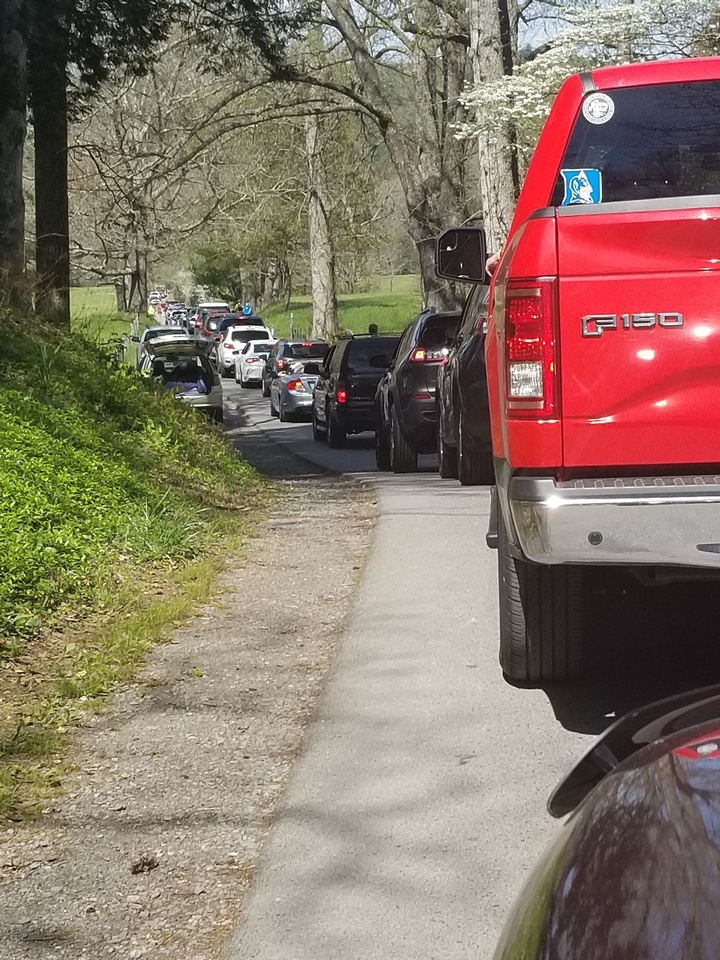 The Bear Jam in the previous photo was caused by this bear.  She was a mom of four and the whole family was laying behind a fallen tree about 50 yards off Hyatt Lane/Cades Cove Loop Road.  It was nearly lunchtime and we were going to go back to Townsend to get out of the heat and eat lunch when we passed this bear.

Tom and I get a long very well on the trips we take.  I think this is the first time ever that I wanted to do one thing and he wanted to do another.  I wanted to stop and watch this bear for a while and he reluctantly agreed.  I'll tell you right now I should have listened to him.  Jake and Luke showed up and we sat along Hyatt Lane for about five hours with only light snacks to eat and because we planned to go to town for lunch, we didn't have much to drink either.  After sitting and sweating under umbrellas the entire afternoon, the bears moved.  Thank you, I thought.  This finally payed off.  Nope, the whole family headed up into the woods and the possible photographic opportunity was gone. 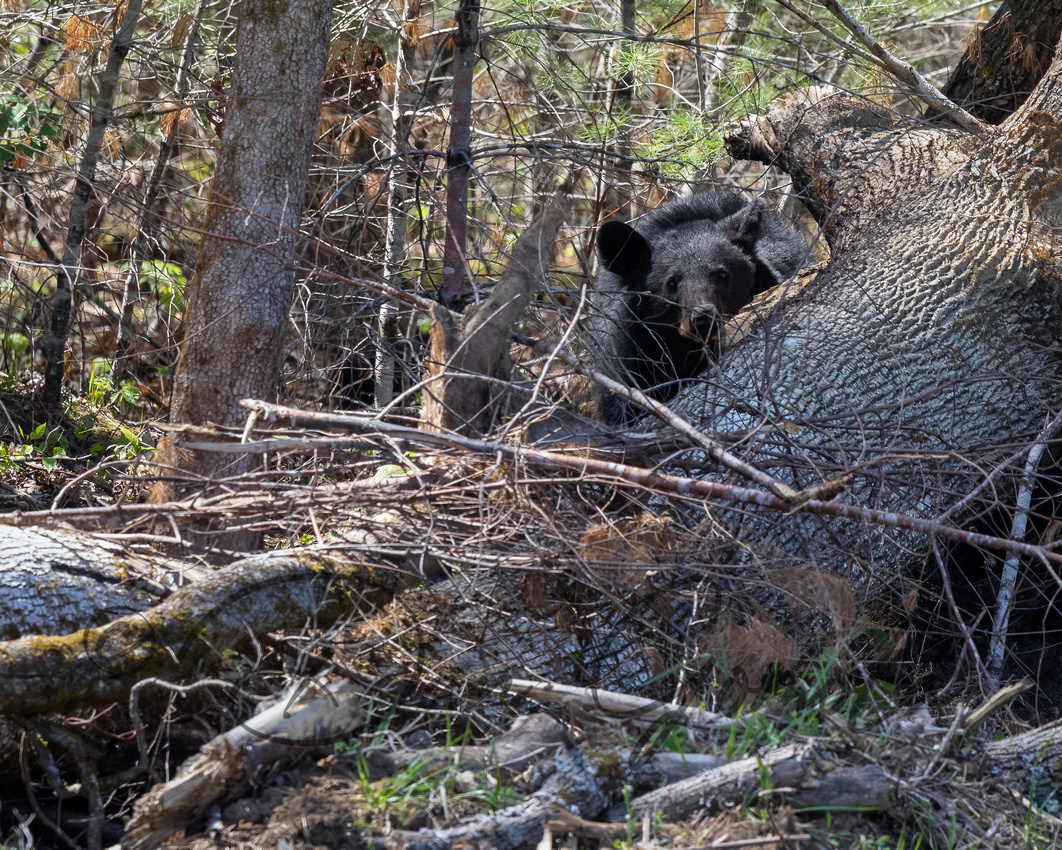 While we were all facing toward the bear during our five hour standoff, this was the scene behind us.  There is beauty in all directions in the smokies. 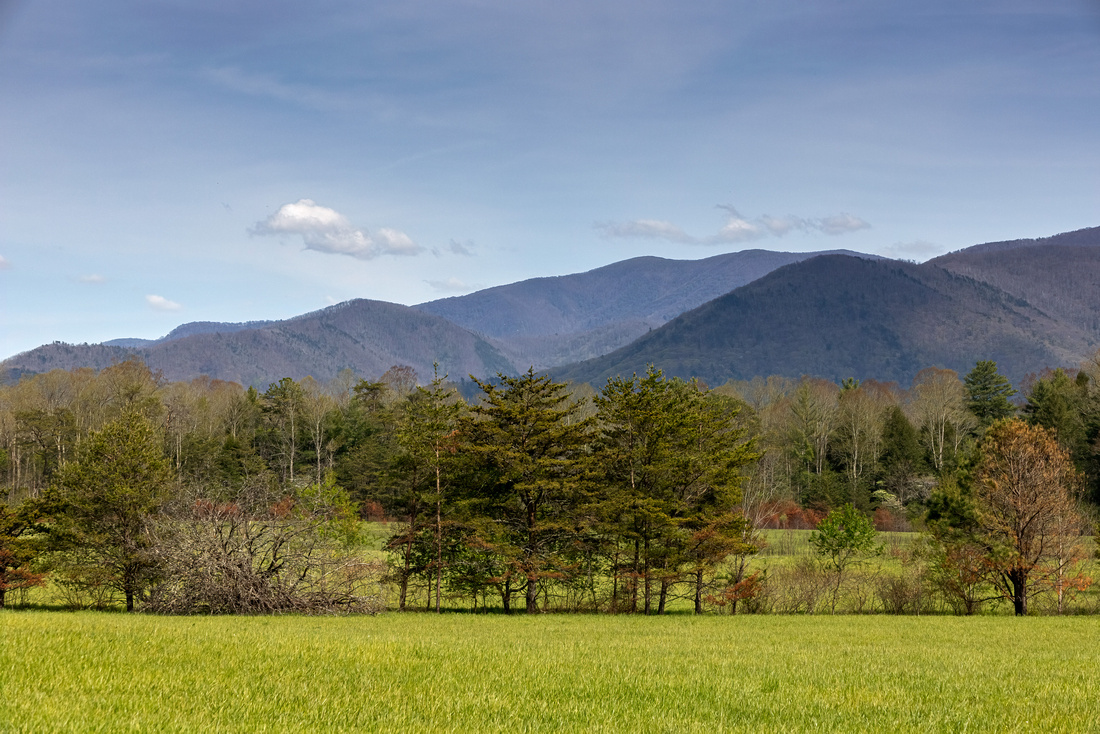 We all had enough for the day.  We headed into town for dinner at Trailhead Steak and Trout House and then evening downtime.

When we returned to Cades Cove the next morning, I didn't know it was going to be my best photography day in Tennessee.

We began by driving the complete 11 mile loop before more people came.  Not far past the trailhead to Abrams Falls there was a yearling sitting under a Black Walnut tree eating walnuts.  I don't know how many of you have ever held a walnut, in the shell, in your hand but they are extremely hard.  We cannot break them open without a tool.  This bear was siting there crunching on them like a little kid chewing up a cinnamon jawbreaker.  I don't know how in the world there could still be walnuts laying on the ground from last fall.  We have four mature Black Walnut trees on our property and the squirrels clean them up off the ground in the fall quicker than I can decide if I should pick them up.  Apparently, Cades Cove doesn't have enough squirrels. 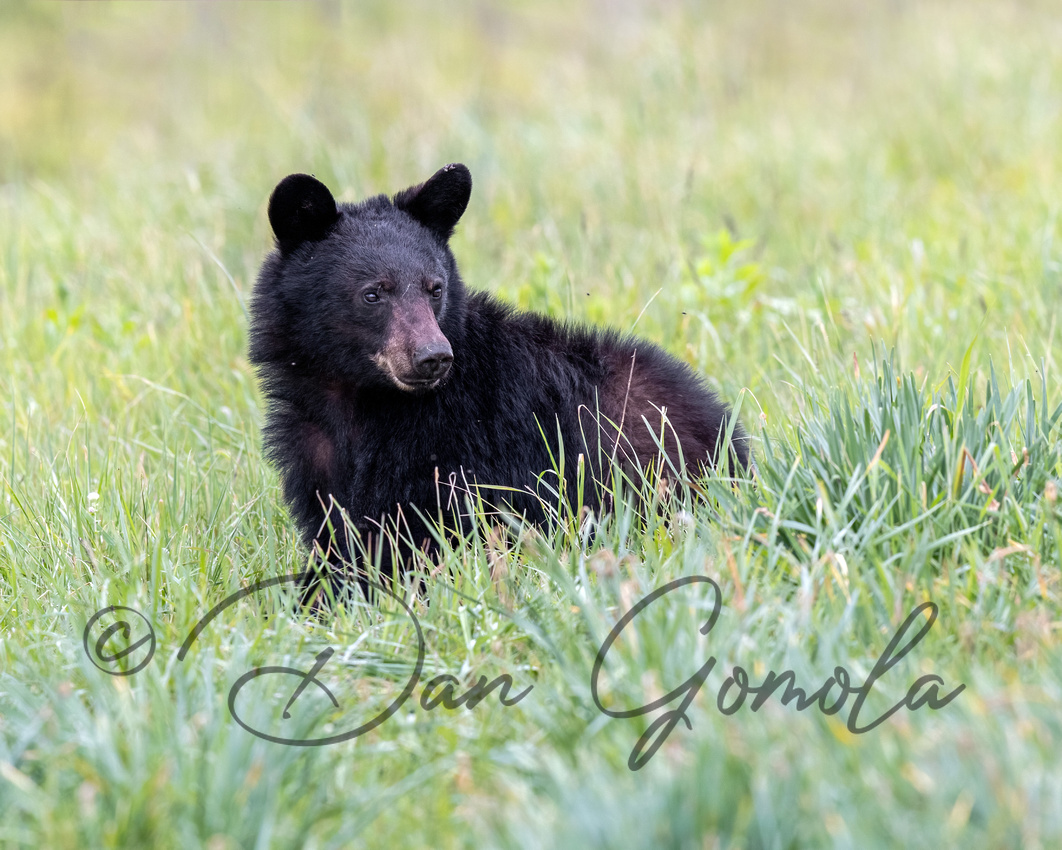 You can see the power in his jaws as he crushes the walnut shells. 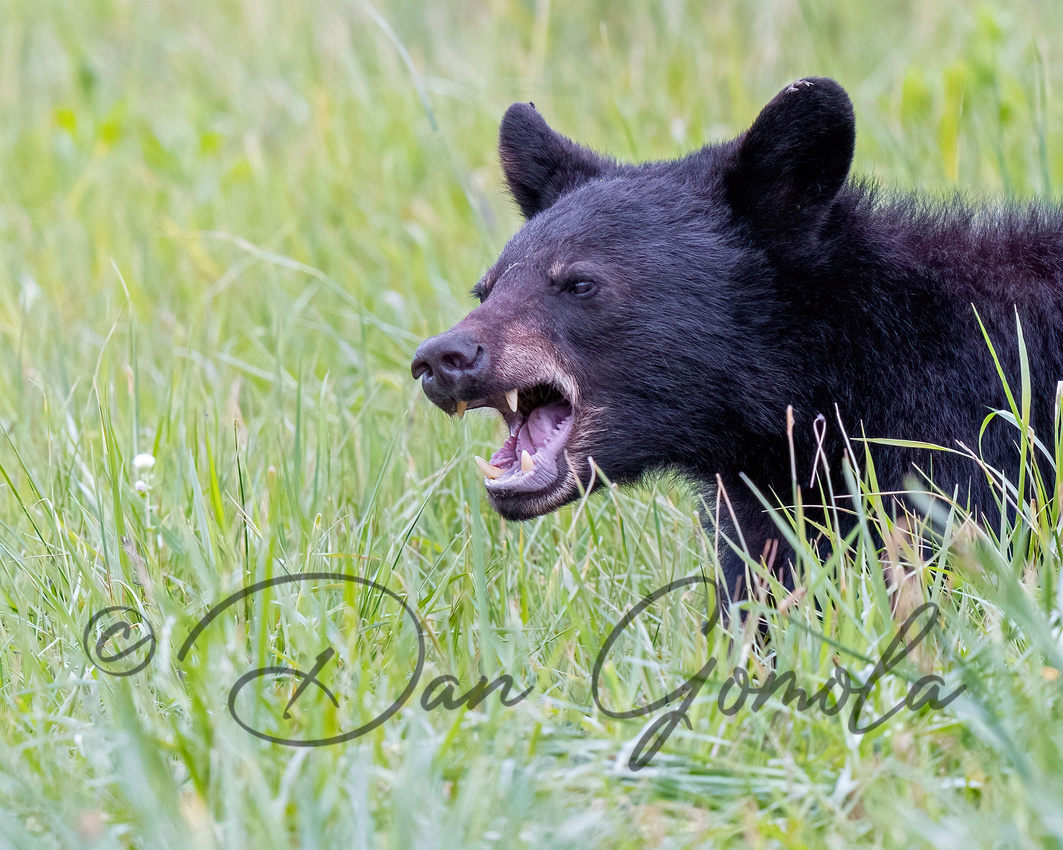 Tom and I spoke with a lady who told us she saw a bear with three cubs crossing the road last evening.  I knew exactly where she saw them so I asked what direction they were going.  With that information, I knew of a spot I was at two years ago with a sow and her cubs.  Since that spot was in the same territory as where she saw them last evening, Tom and I decided to follow that hunch.

We hiked into the woods on a trail before going off trail and down over a steep hillside riddled with fallen trees.  There she was at the bottom.  She was laying up against a tree on the opposite hillside and her cubs were all sleeping around her.  There were a few other photographers already there.  We were beginning to know all of them by now.

We all picked a seat on a log or the ground and waited.  Eventually, momma got up and walked into a clearing and began to eat. 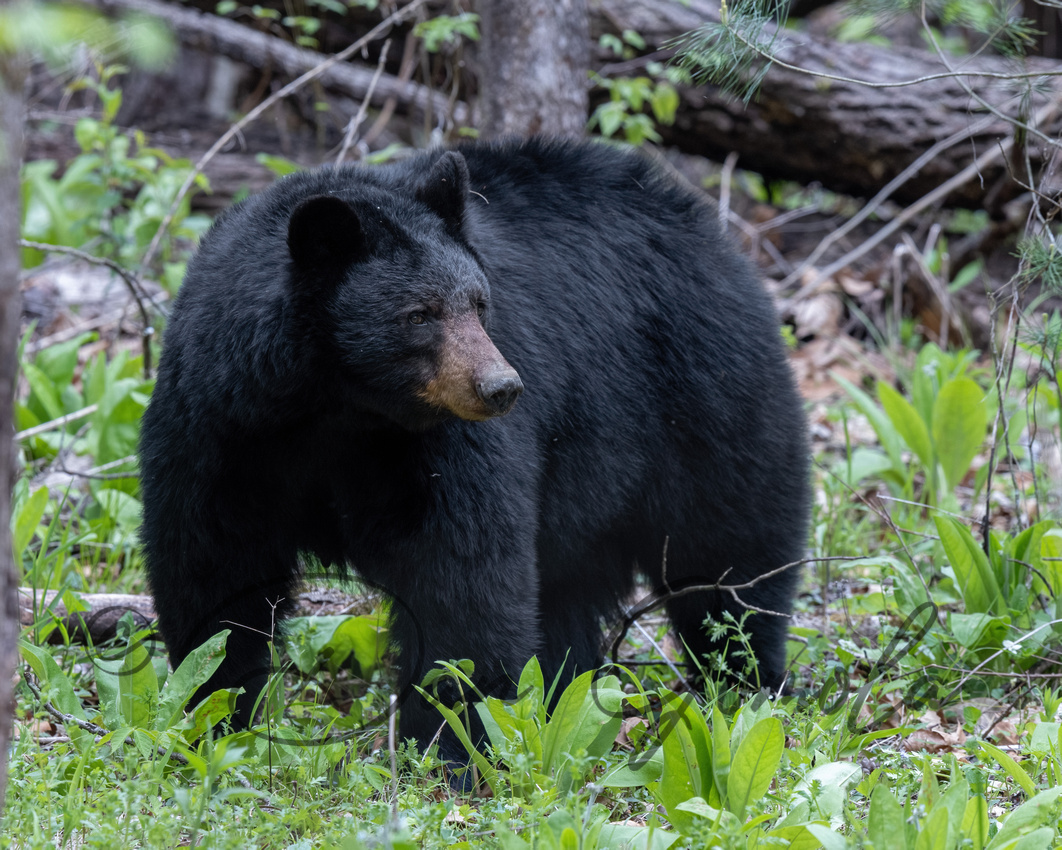 Her three cubs slowly got active and joined her.  They were so comical fighting each other, climbing trees, biting sticks, and simply playing.

Someday, that stick will be no match for its jaws. 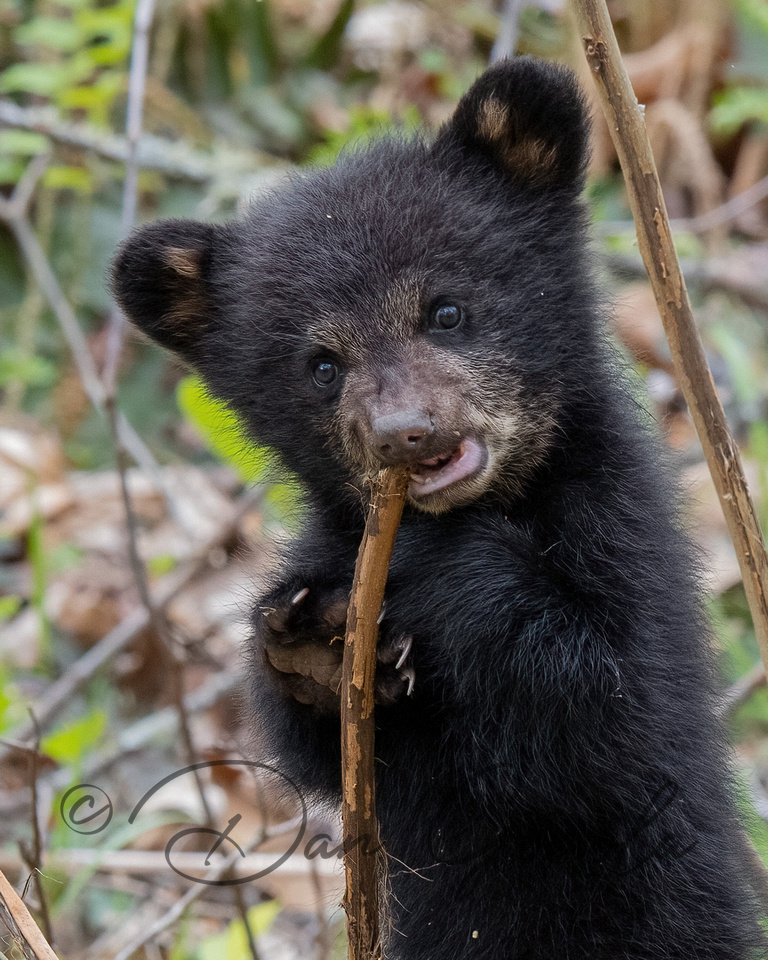 There were a few of us that actually laughed out loud at some of the antics of the cubs.  I think it would have been easier to climb up the right side of the broken branch but it chose the left side.  Gravity won in this decision.

I think the sibling is saying "Get off of my log!" 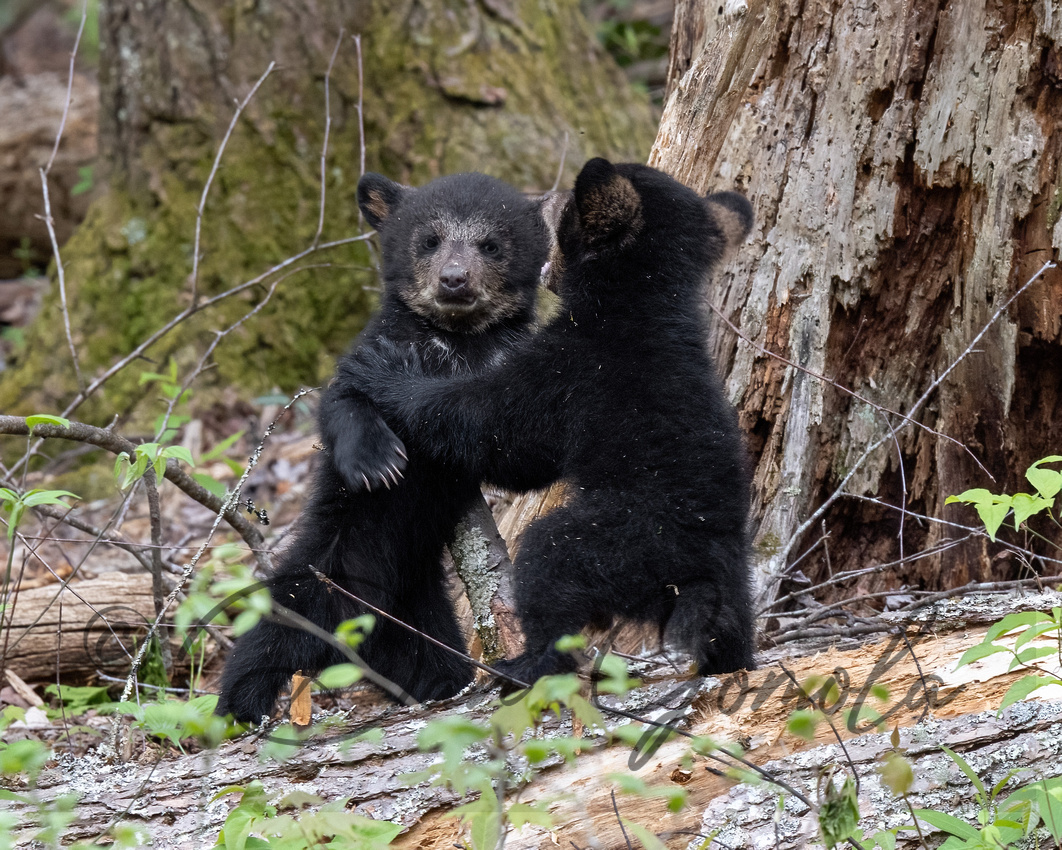 They don't let a good shove keep them down. 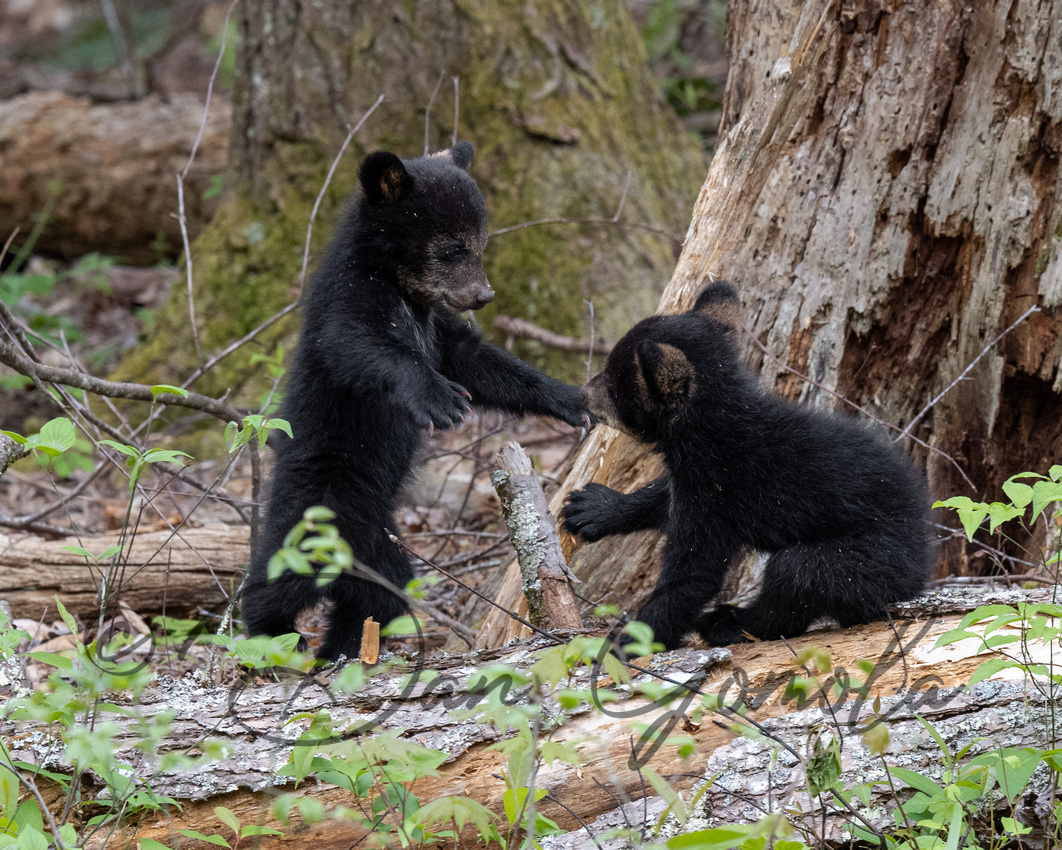 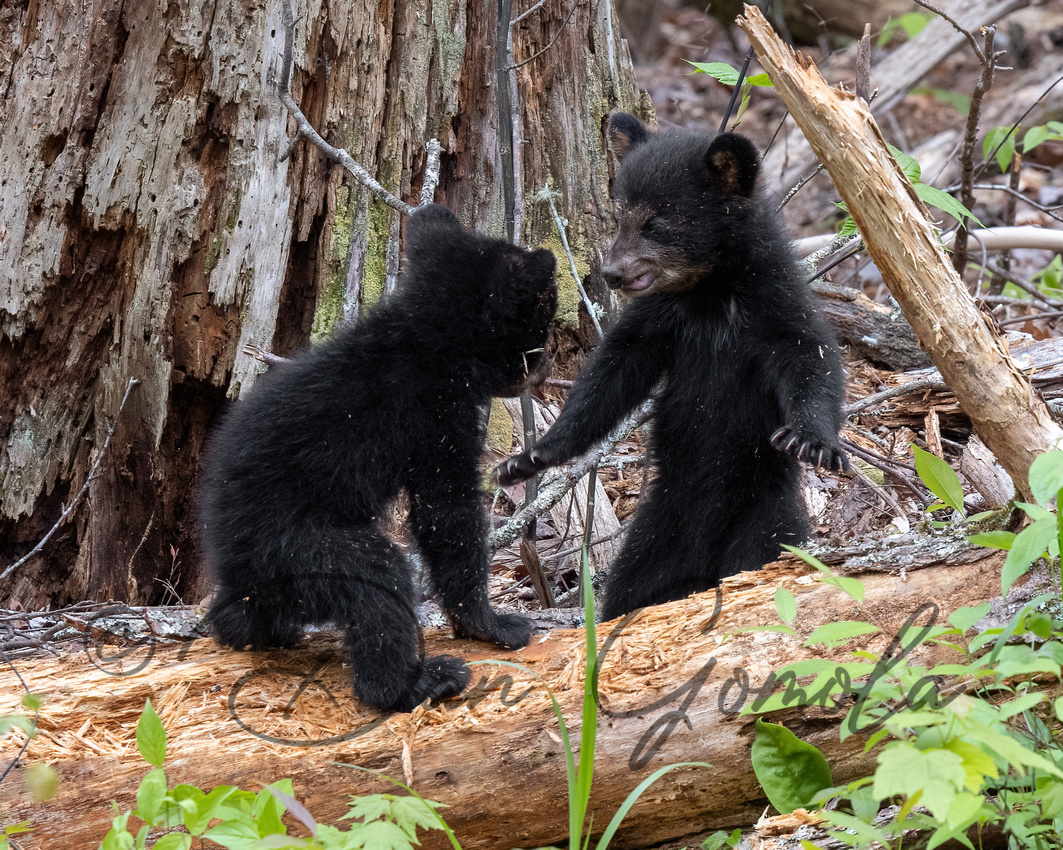 This little cub took on a big tree and climbed up out of the shadows and into the sunshine above the flowering Dogwood tree. 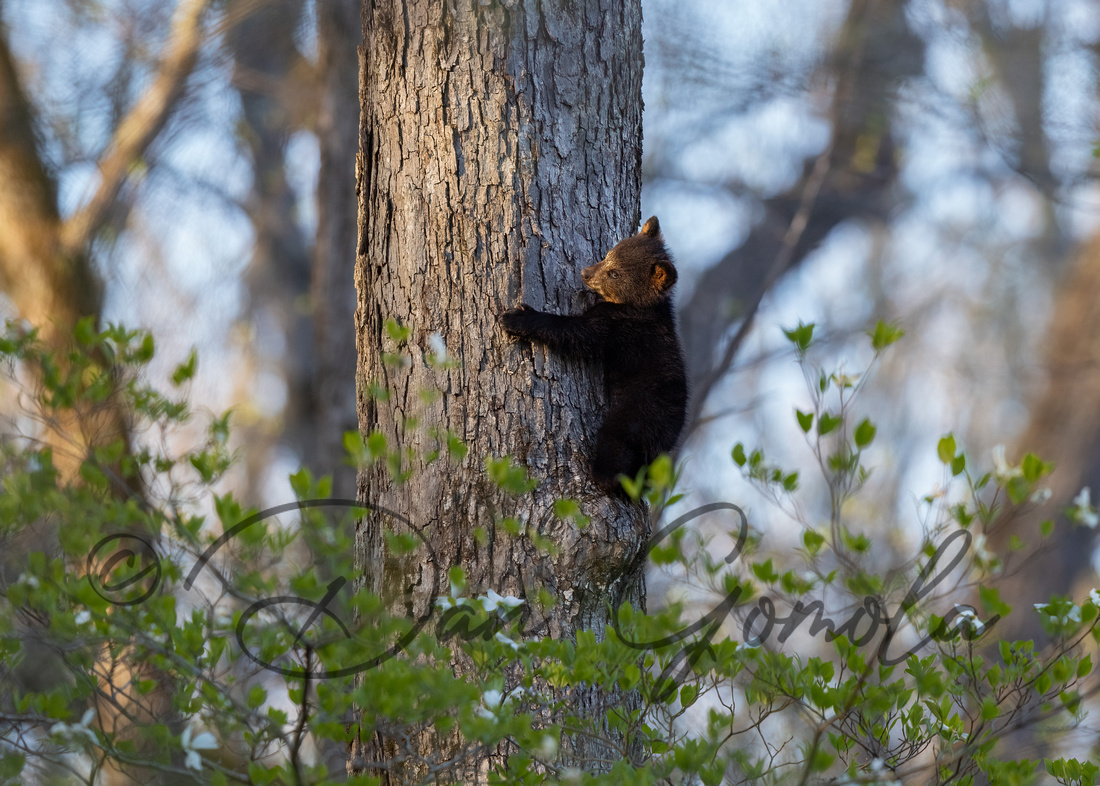 Meanwhile, back on the ground... Take a look at those claws. 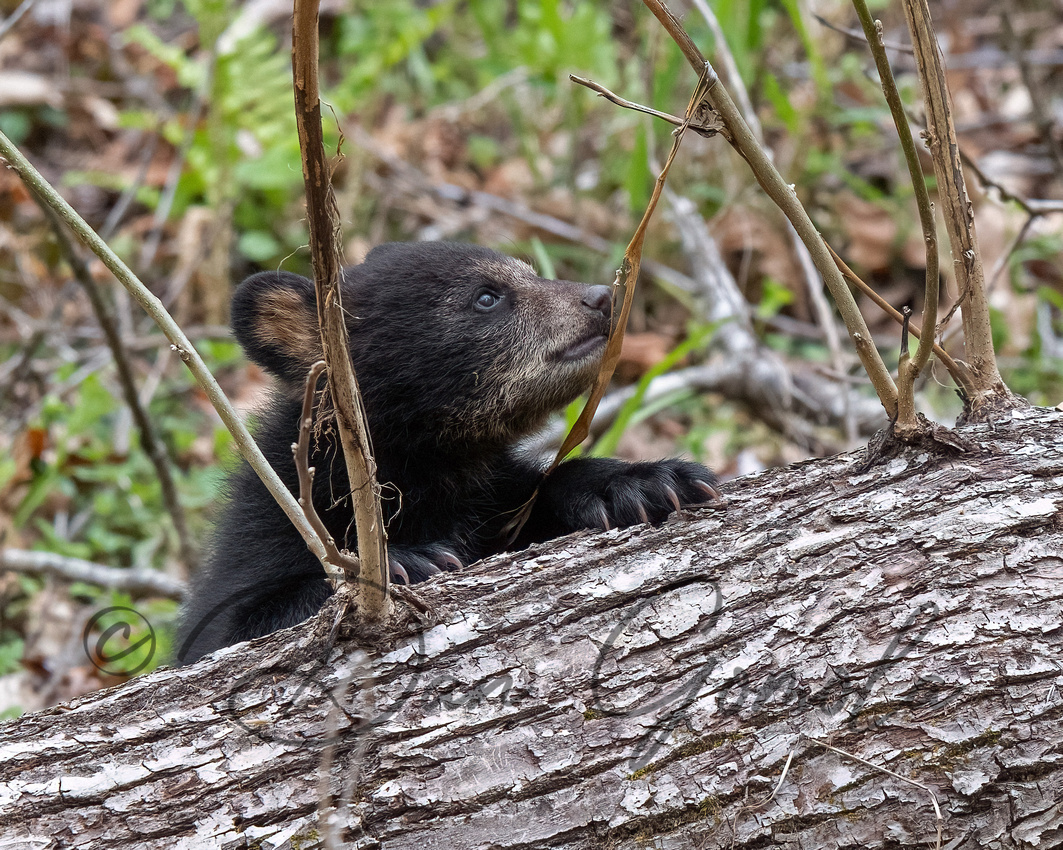 Yikes!  This little cub stuck its nose in the wrong place. 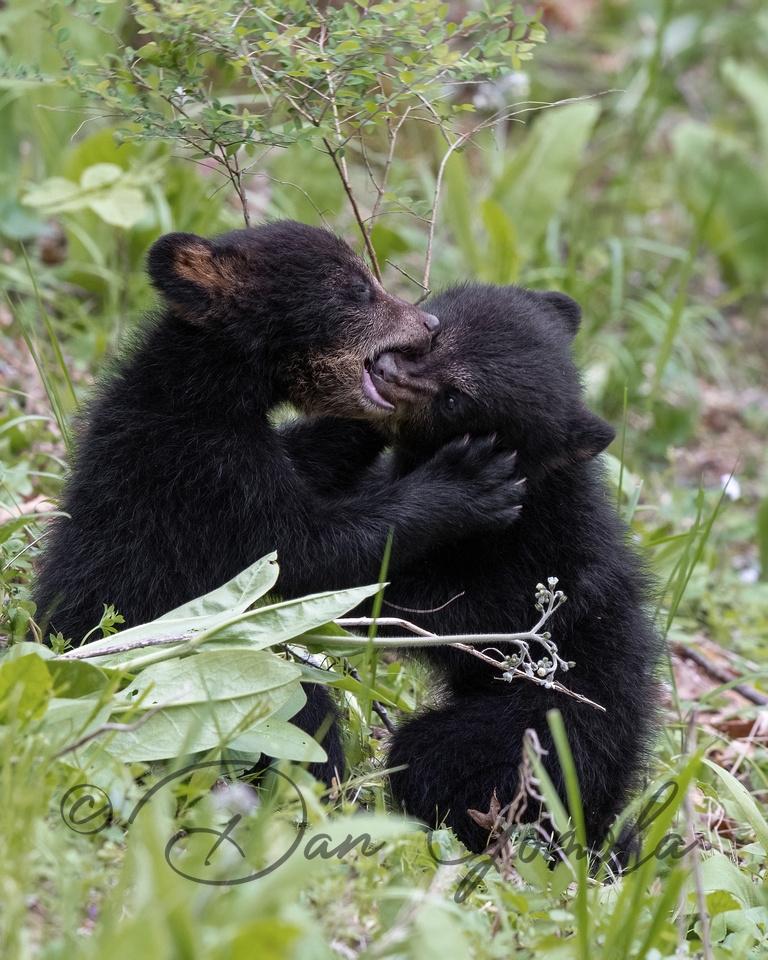 This was the last photo I made before momma and the cubs headed up the hillside to the same spot they were when we arrived.  They all laid down on the opposite side of a large tree.  Since we thought we had a couple hours before they became active again, Tom and I decided to go into Townsend for lunch and hopefully see Jake and Luke to tell them about our find.  We ate lunch at the Townsend Pancake House before heading back to Cades Cove.  We never got the chance to speak with the other guys.

We hiked to the same spot that we spent the morning and the bears were already active.  Tom and I were the only two people there.  The bears were all ours! 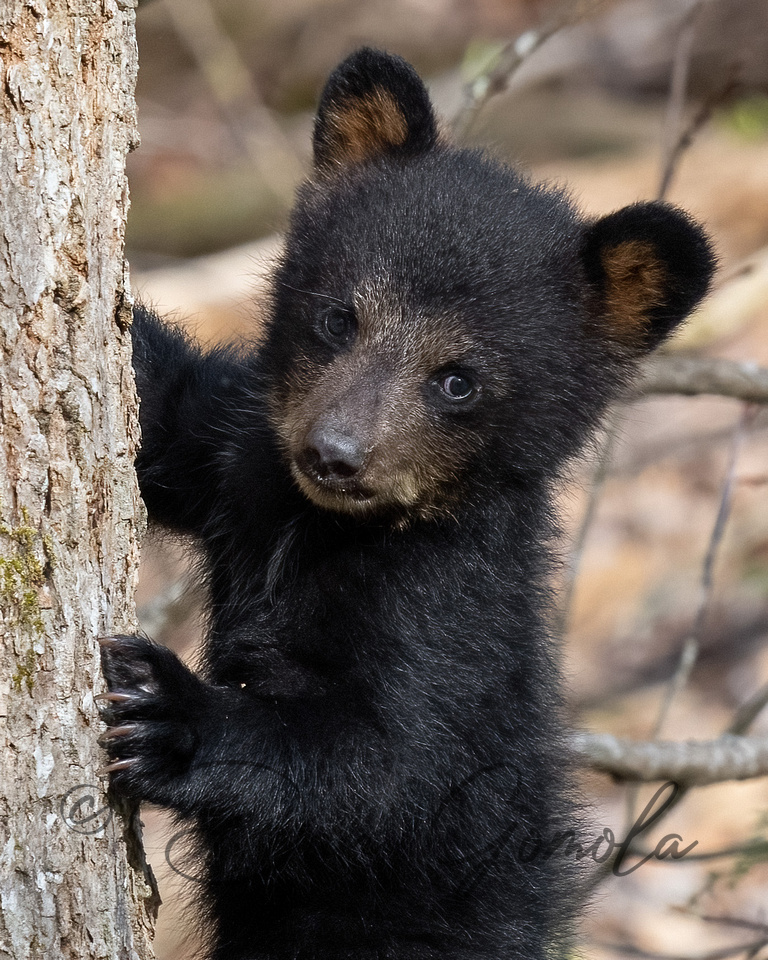 Momma was walking around eating while one of her cubs kept trying to nurse.  She'd paw at it to stop.  Then, the cub jumped up onto her back.  I couldn't believe it.  I've heard they do that but never saw it and certainly didn't think it would happen when I could photograph it. 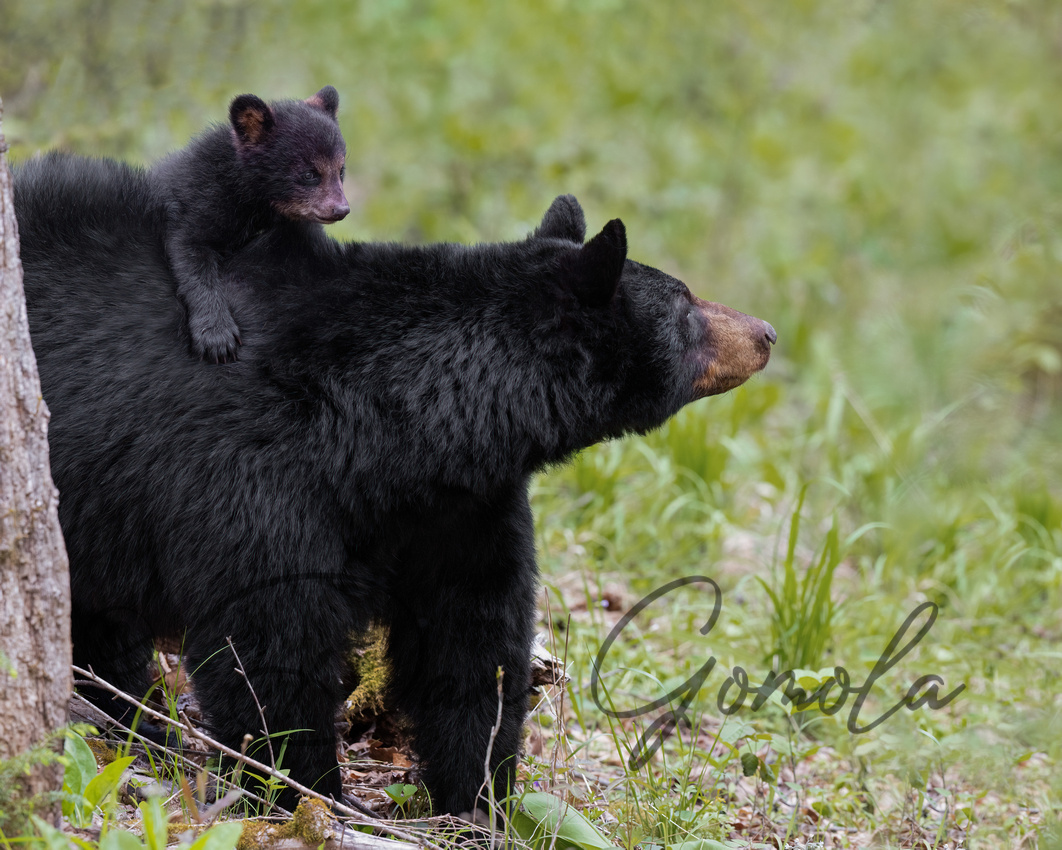 Moments later mom gave in to the hungry cub and she laid down.  The other two cubs came running.  She rolled onto her back and allowed the cubs to nurse.  This is the first time I ever saw this happen and it was very special. 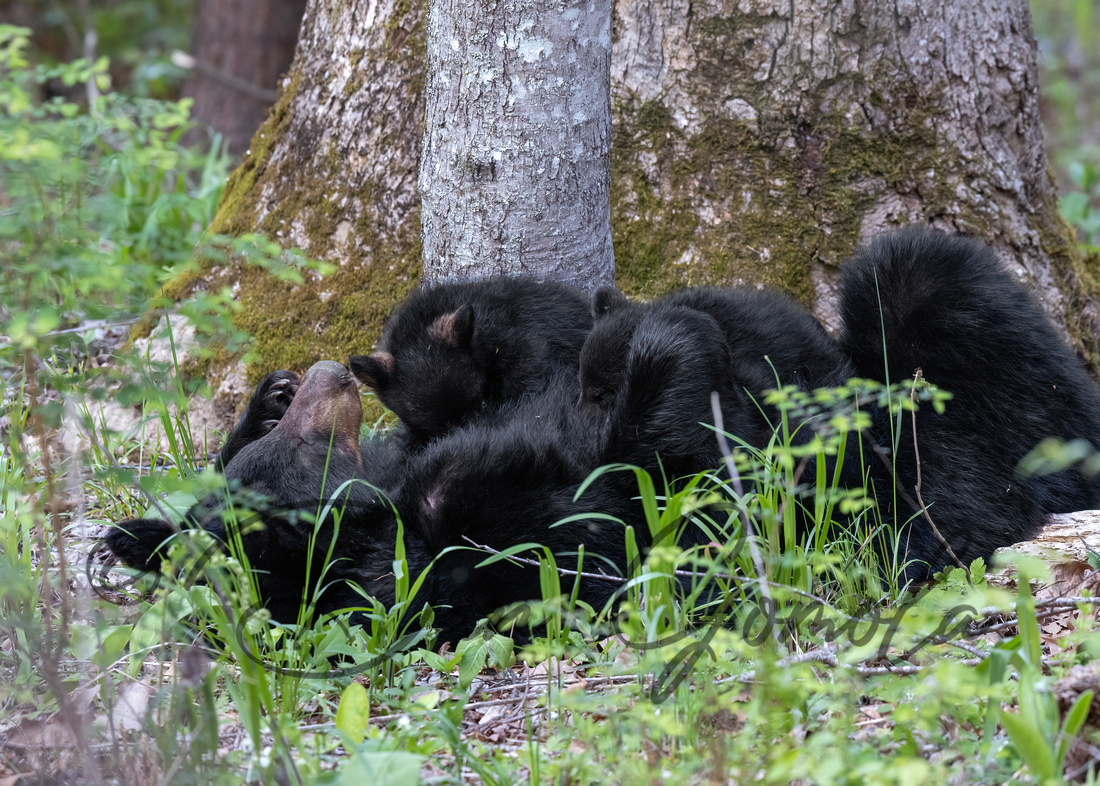 Here is a short video of the cubs nursing.  I tried two different views hoping for less obstacles but neither angle stood out as the best.

Mom stared into the forest as if she was thinking "I am home". 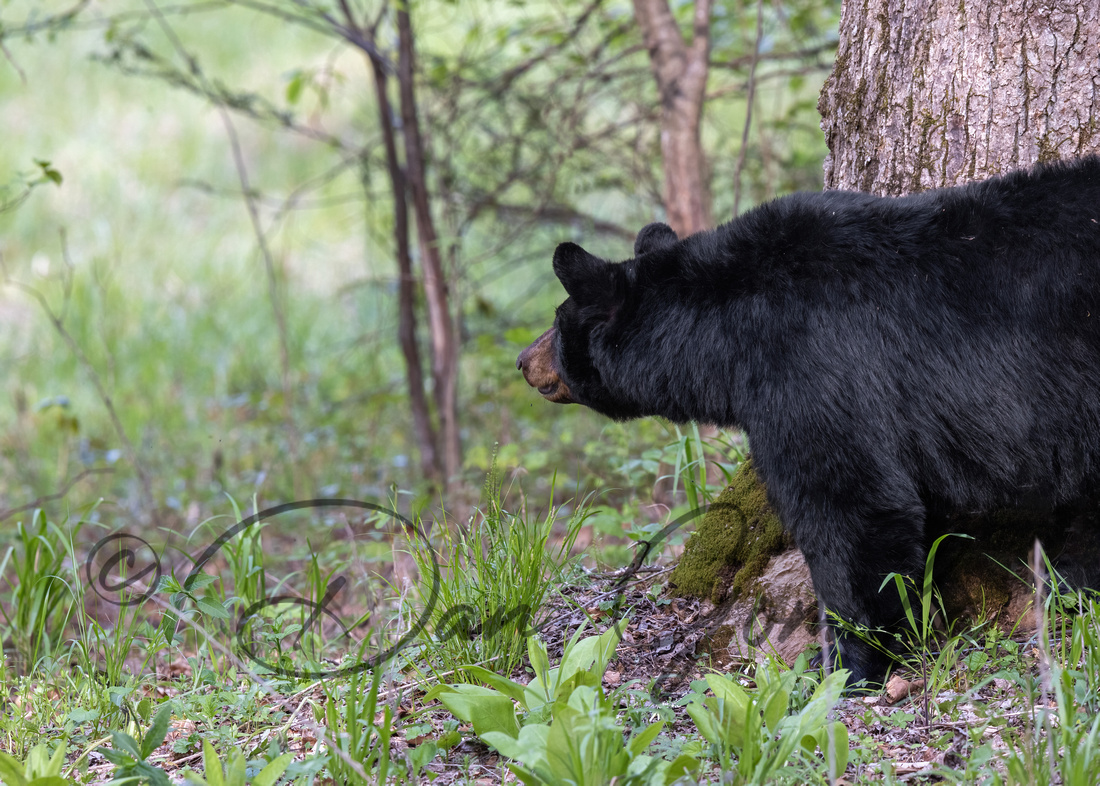 After eating, this little family had a lot of energy.  They tore at this decaying log as if they were looking for grubs; just like momma does. 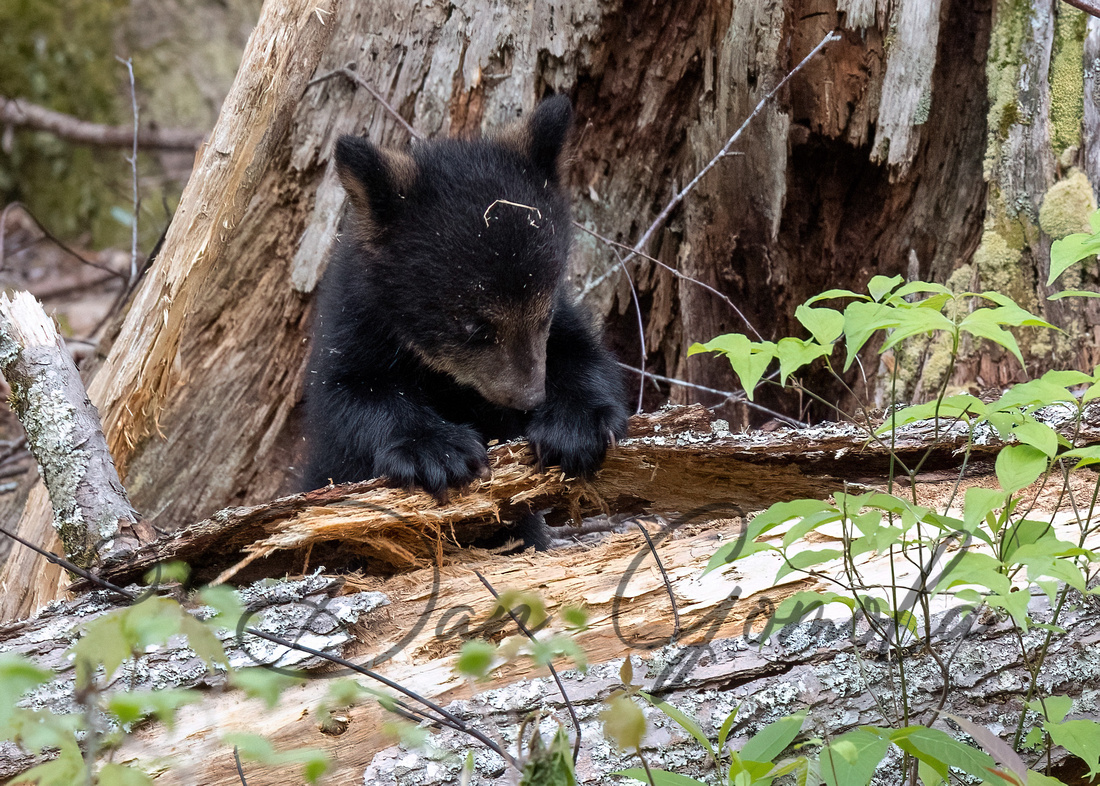 When one gets in the path of the other, a rumble begins. 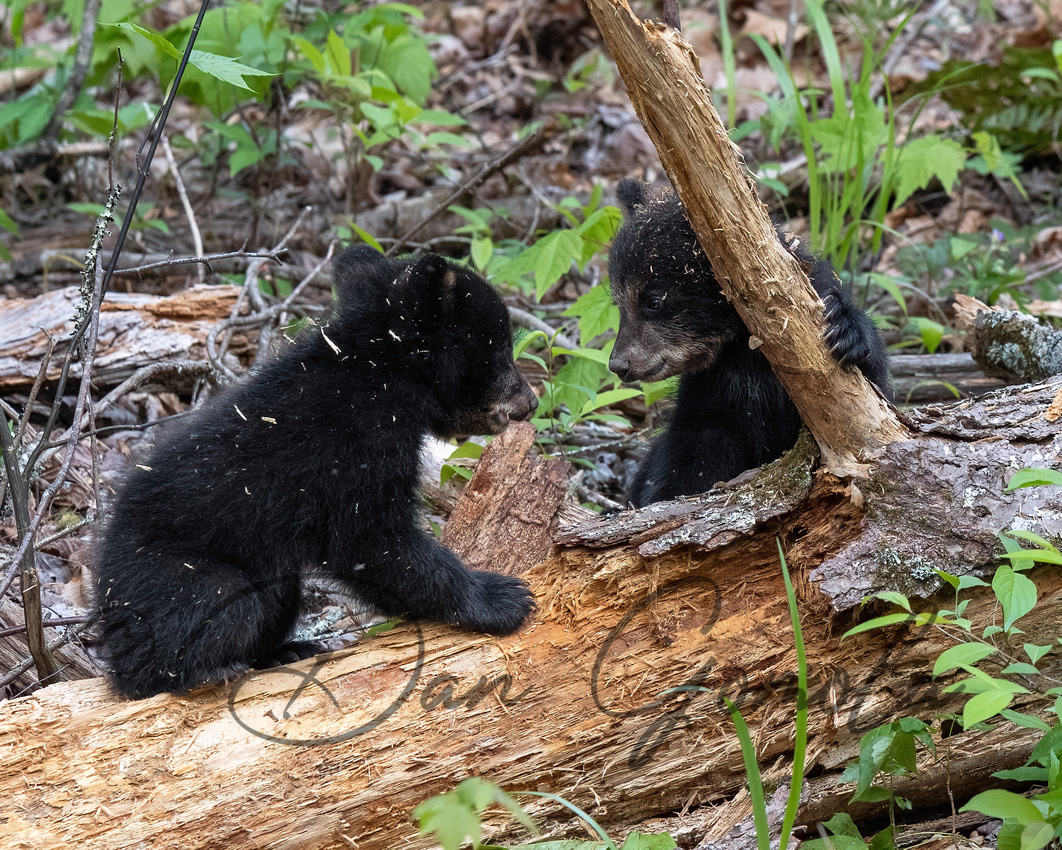 Sometimes together and sometimes apart, they all kept themselves busy.

At times, it was tough to get a nice photo of the sow because she usually had her head down feeding on grasses.  She'd look up occasionally to see where her cubs are.  That's when I was able to capture this portrait. 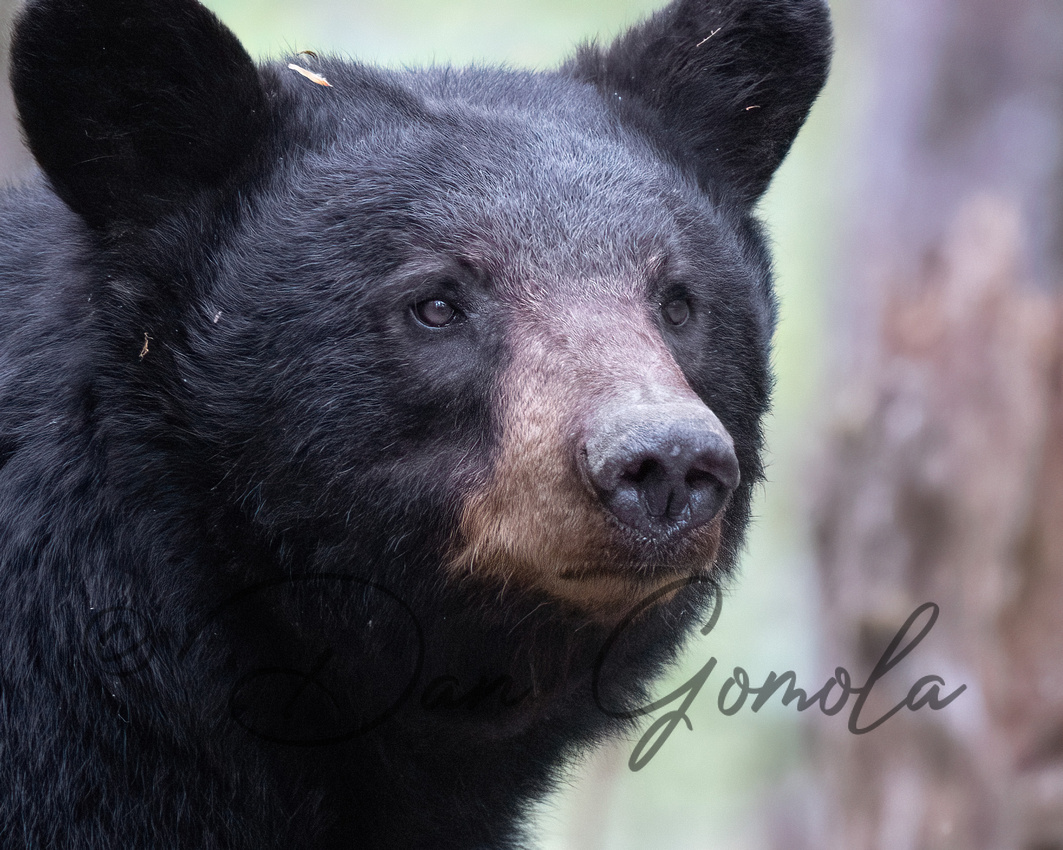 We were in a ravine so it began getting dark a lot earlier than up the hill.  When the activity began to slow down, the sow took the cubs to where they were bedding down during the day.  Tom and I decided to hike out to the vehicle and go watch the Pileated Woodpecker nest the rest of the evening.  When we got there, the male was tending the nest.  He kept looking out as if he was watching for the female to come back. 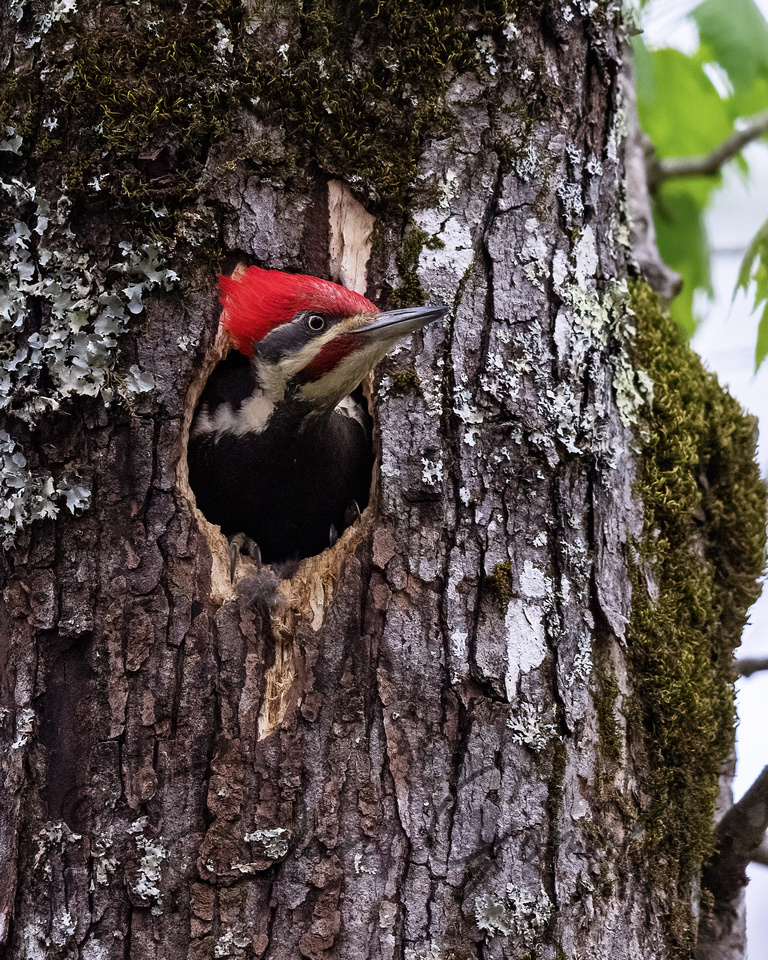 That was our last stop for the day.  Off to Townsend and a good night's sleep to get ready for day 5.

Thank you for reading part two of my story.

If you would like to go directly to part three, click this link for My Cades Cove Experience Part Three.