Throughout my childhood I was always interested in wildlife and trying to photograph them.  When I was about 8 years old, I began to tote around my first camera, a 110 Instamatic.  Later, I had a Polaroid and a Super 8 Movie Camera.  I remember my mom telling me, "Now don't break it"!  I took photos of every animal I could sneak up on.  I didn't know back then what I know now about wildlife photography techniques.  My opportunities back then were all luck and no skill.

My father and I used to take evening drives into the country.  He worked on the railroad and was out of town a lot so when he was home, we disappeared in the evening for a few hours.  Mom thought we were crazy.  She just didn't understand!  One evening, as we drove the rut filled country roads through the farms and forest of Jefferson County in Pennsylvania, we saw two large objects sitting on a limb hovering high over the road.  As we got closer we made out two full grown Barn Owls sitting side-by-side.  It was amazing.  My first ever owl.  In those days, I didn't even dream about seeing an owl.  I thought nobody sees owls except zookeepers and National Geographic photographers.

Years have passed and owl sightings were still few and far between.  Heck, even when you are looking for them they are scarce.  Once I learned the habitat of various species of owls, they can be found a little easier.  In this photo essay, I'd like to share some owl photos I made during the winter and spring of 2021 right here in Western Pennsylvania and Ohio.

These first two photos are Eastern Screech Owls.  The one on the left is a red morph and the one of the right is a gray morph.  The gray variation is more common than the red in the eastern United States.  Although they look large in these photos, they are only 6-9 inches long. 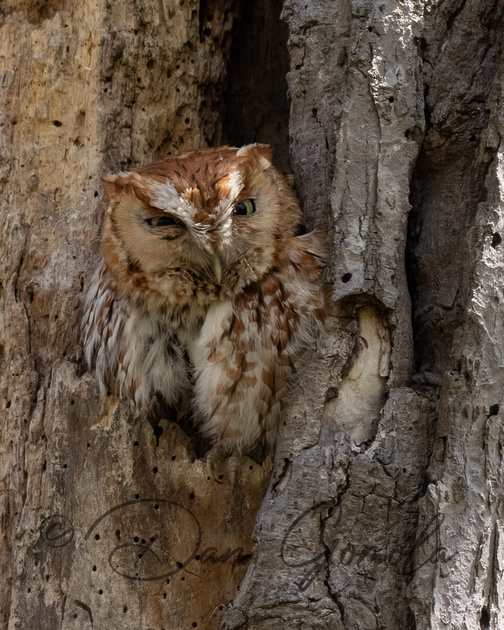 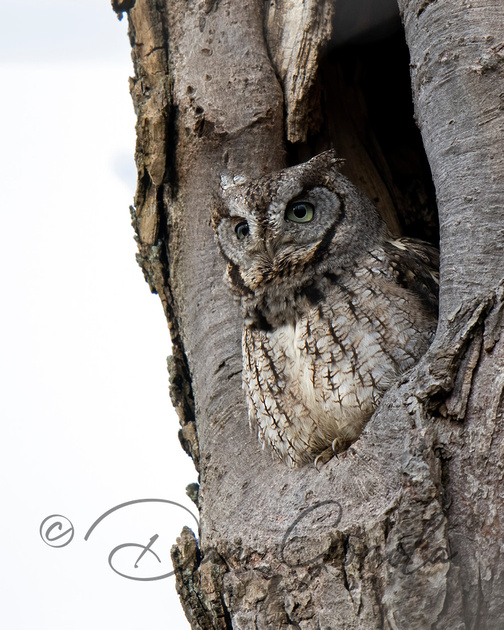 The Great Horned Owl is the most common owl in the United States.  They are a fierce predator that can take down animals larger than they are.  They are night hunters but you can find them roosting during the day in evergreens such as the Eastern Hemlock. 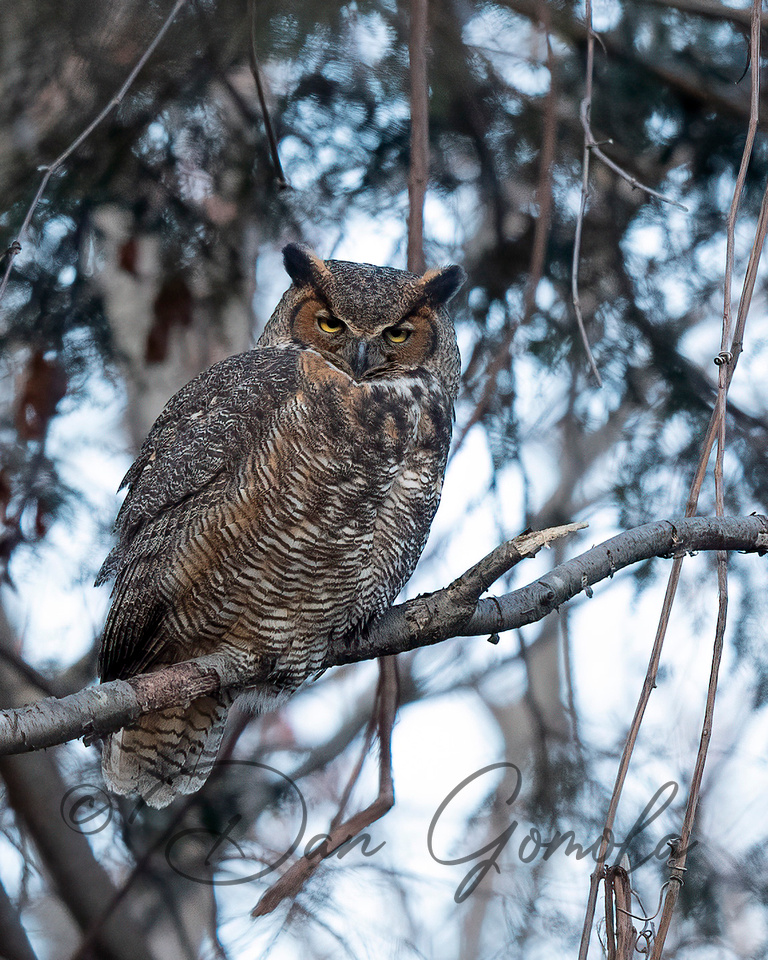 This is a Great Horned Owl owlet peeking out of its nest.  They grow fast but this one is still a few weeks from fledging. 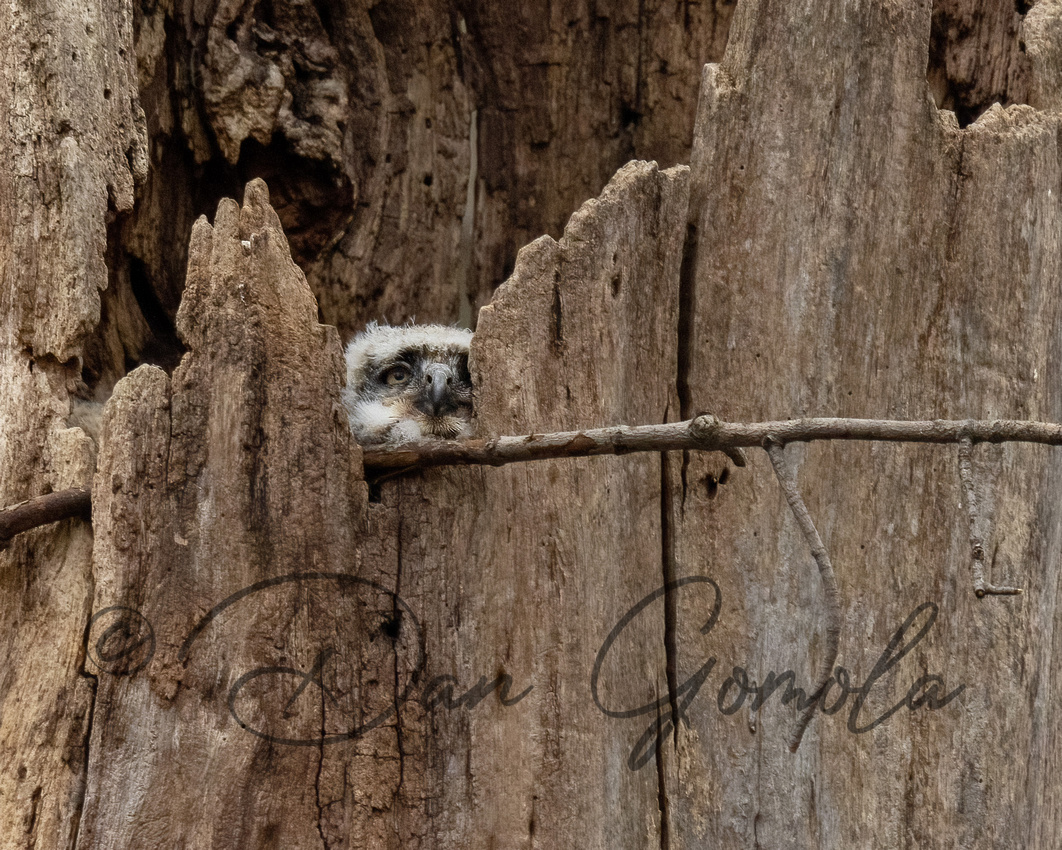 Here are two Great Horned Owl owlets perched above their nest from which they are nearly ready to fledge. 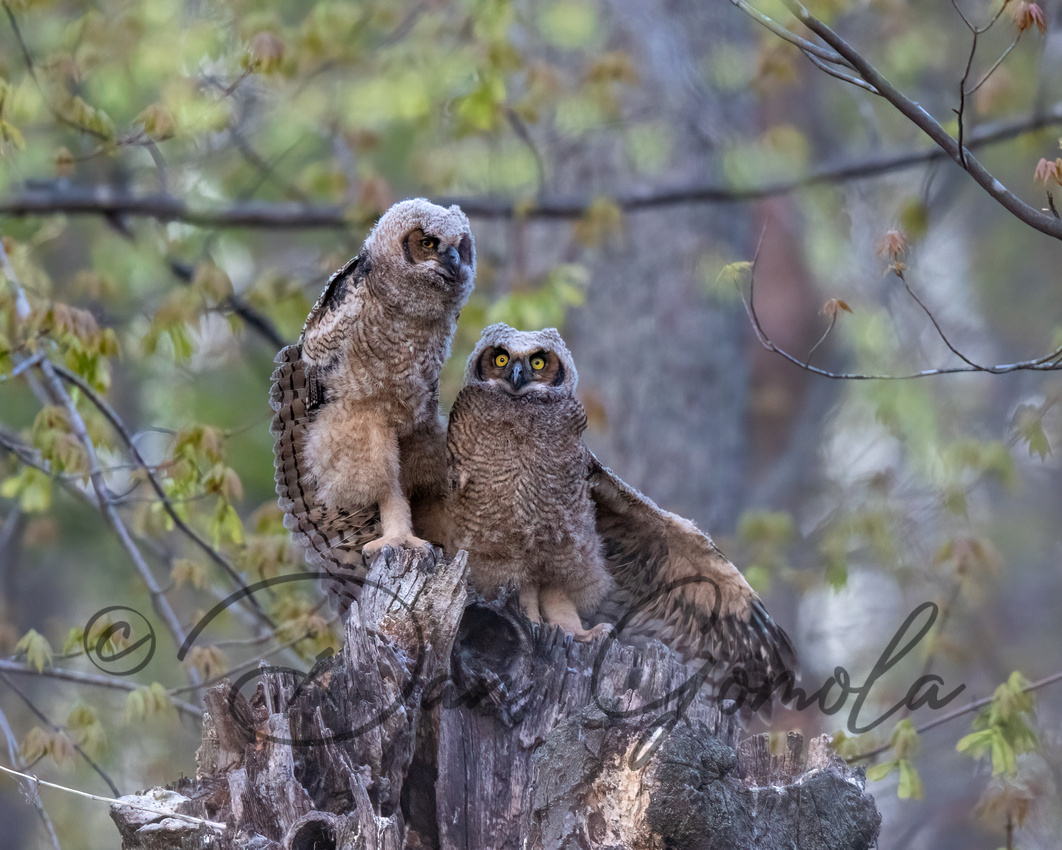 Until April 2021, the Long-eared Owl has eluded me.  On a visit to Ottawa County Ohio, I was finally able to photograph not one, but two Long-eared Owls.  They were hidden in a dense row of wild shrubs along a canal.  I can't take credit for finding them.  Well, I kinda can.  There were a few birders and photographers watching one of the owls when I arrived.  They told me they were watching a Long-eared Owl so I parked and set up my gear.  As we watched, they told me there were two there yesterday but one must have left.  I searched up and down the canal for nearly an hour and finally spotted the second owl. 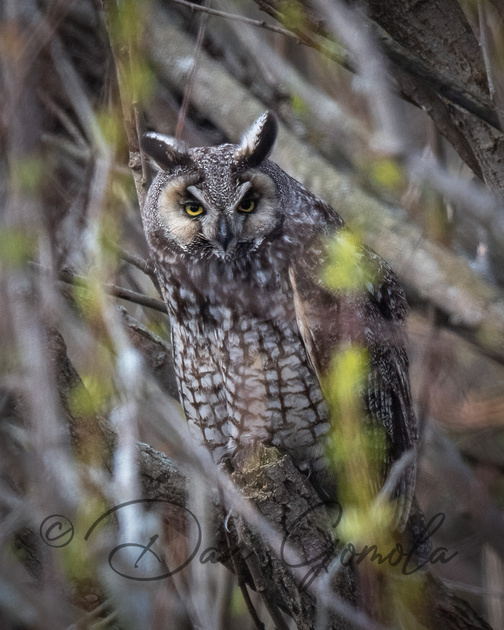 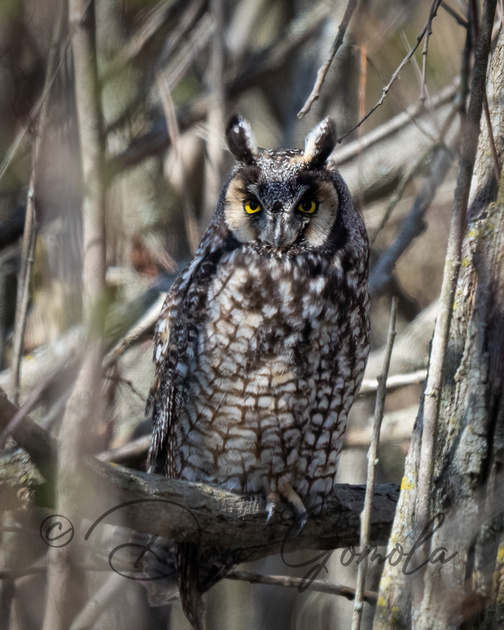 The Snowy Owl is an owl all birders and avian photographers wish to see during the winter.  Sometimes we see them in large numbers (called an irruption) and sometimes we are lucky to find only a couple.  Irruptions in the lower 48 are caused by a lack of food in their breeding grounds up north.  By the time they reach Pennsylvania, they are starving and need to be left alone to find food.  Because of their apparent lack of fear of humans, people tend to get too close and put the birds in danger.  When I'm lucky enough to find one, my camera gear allows me to stay very far away and still make a good photograph.

This Snowy Owl was sitting on the frozen, snow covered Pymatuning Lake. 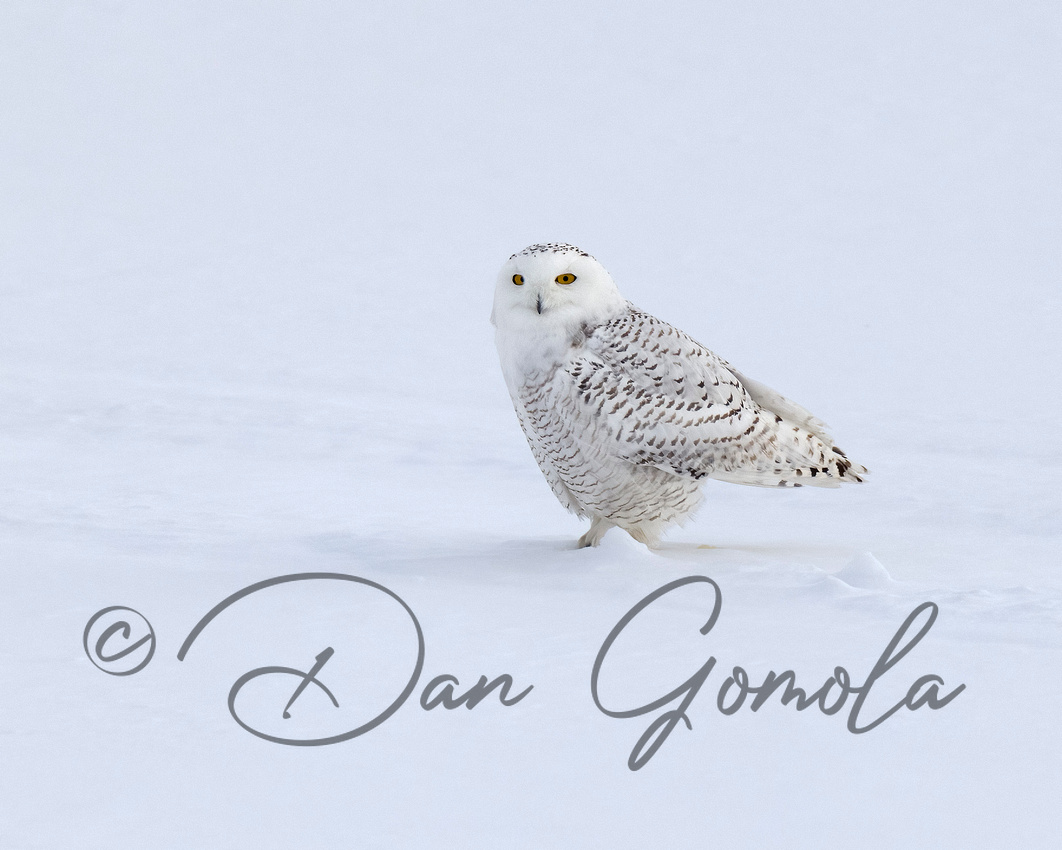 Every once in a while, she would take off, fly a couple wide circles, and land in nearly the same spot on the ice. 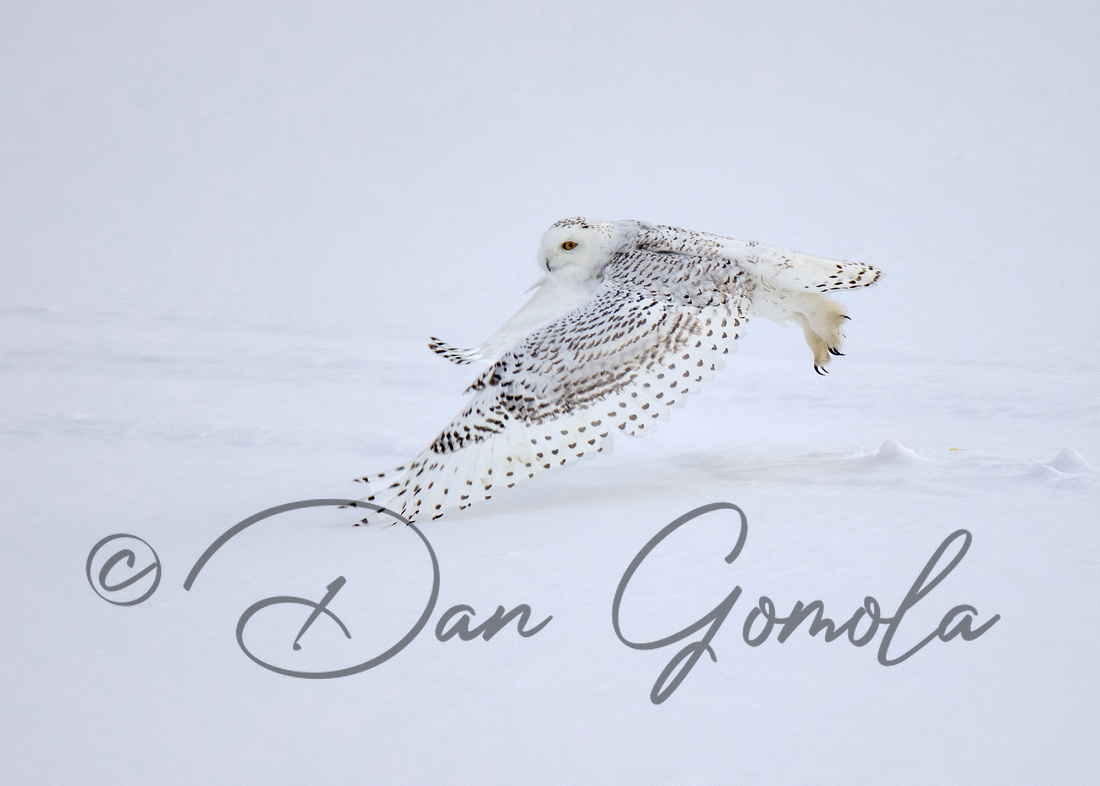 The last owl I want to share with you is the Short-eared Owl.  While they breed in Canada and Alaska and spend winters in the United States and the northern half of Mexico, there is a band across America where they may be seen all year.  We look for them mainly in the winter and begin to lose them in March and April.  They usually begin to fly and hunt the fields minutes before sunset, leaving very little time with light for photography. 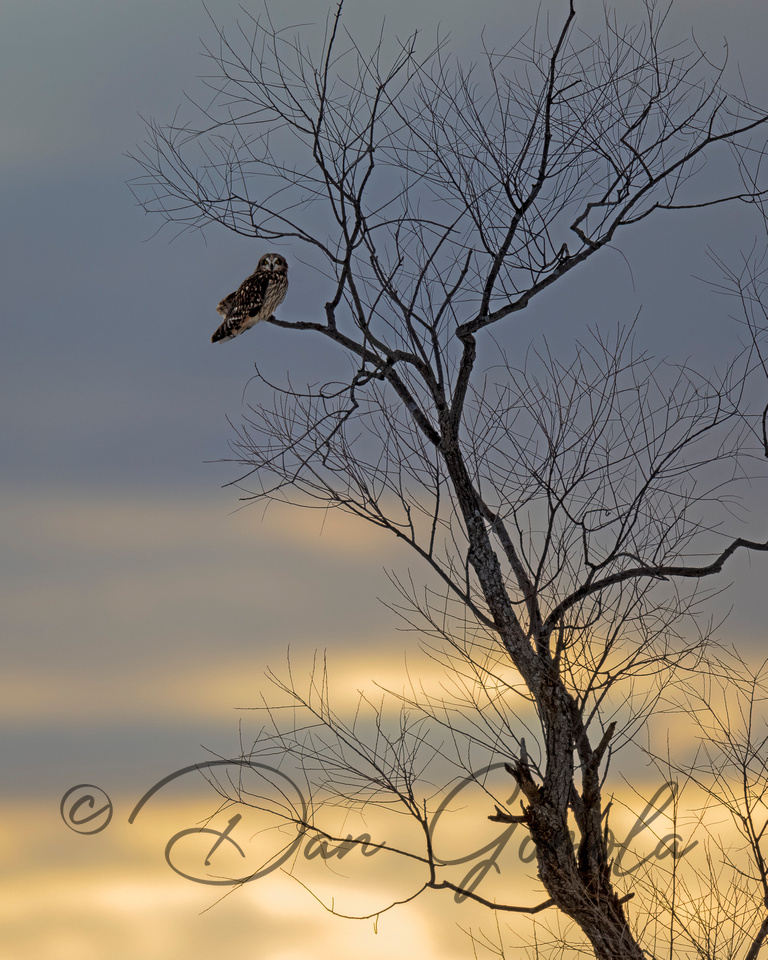 In the dead of winter, they sometimes make an earlier appearance in good light. 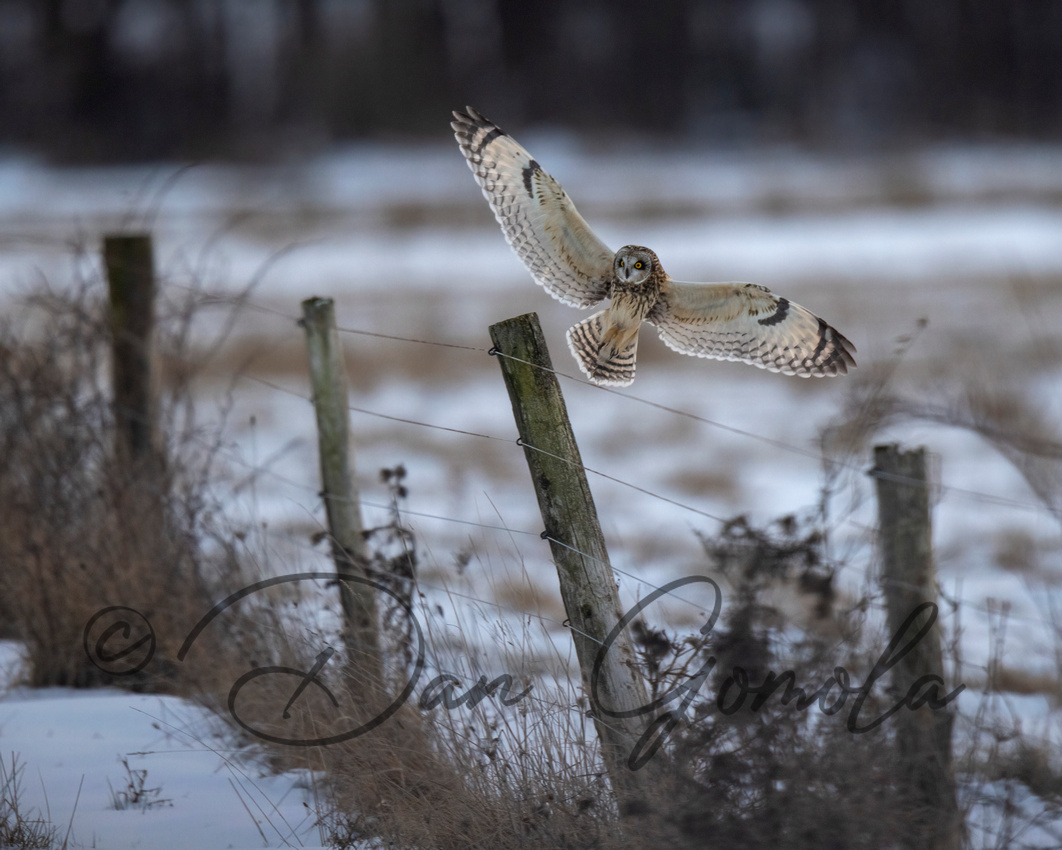 They fly in circles close to the ground while searching the fields for voles.  When they spot something to eat, they drop to the ground fast to catch it. 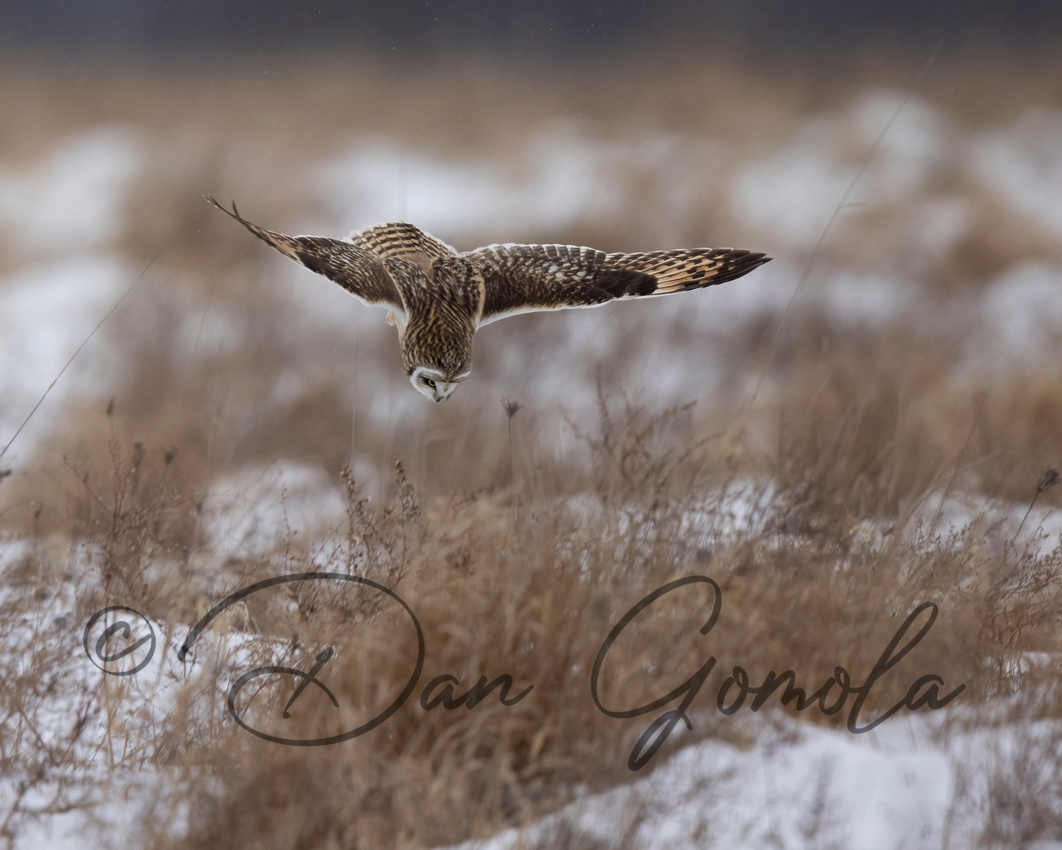 I caught this Short-eared Owl dropping into the snowy field. 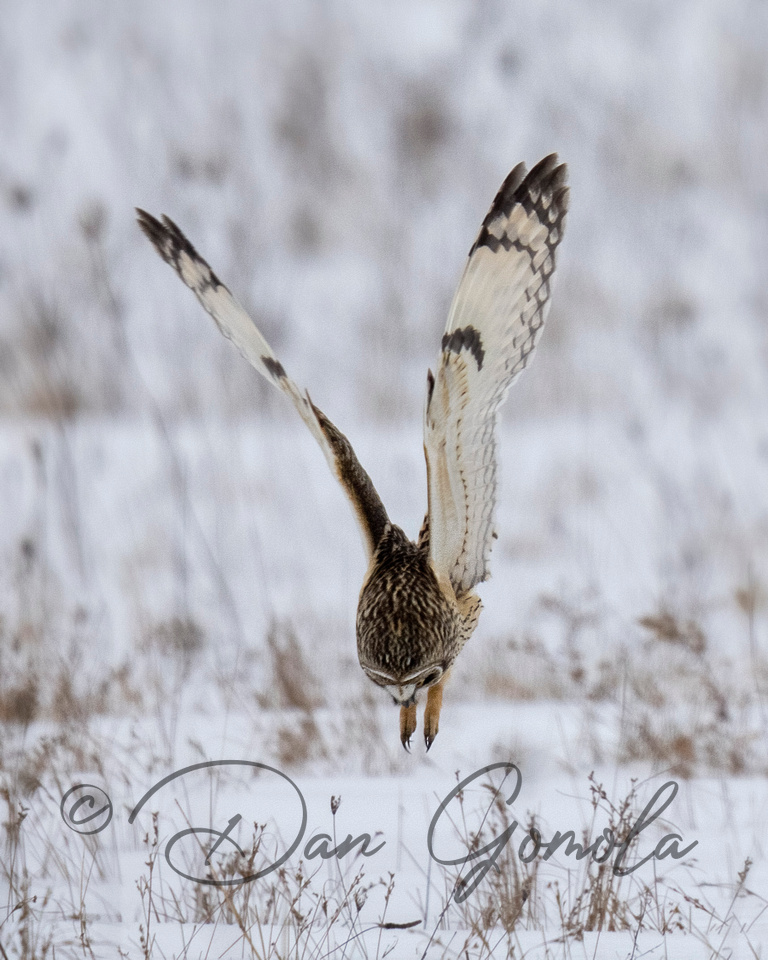 The owl sat on the ground for a long time and lowered it's body when other owls flew by. 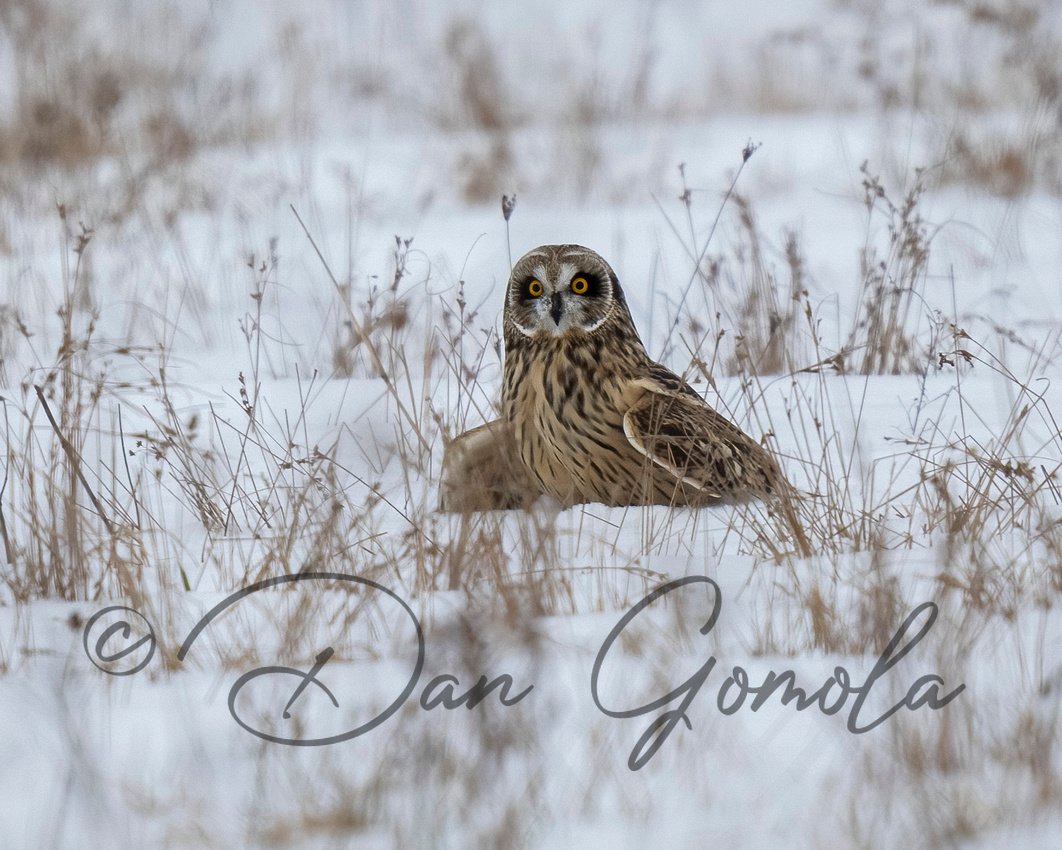 It's actions were a good indication it had caught something.  I had my lens focused on it as it took off with its catch. 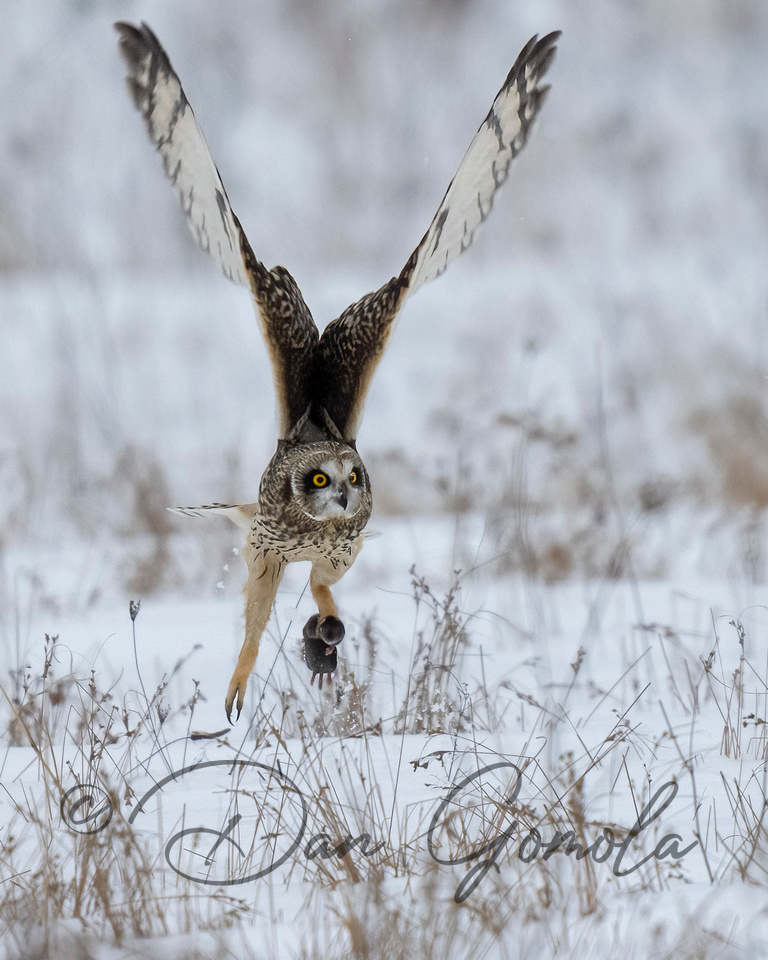 Short-eared Owls in flight are very difficult to track.  I try to keep my lens on them and in focus because I never know when two or more owls will meet mid-air and fight.  This image isn't exactly as shot.  The upper owl was higher in the frame creating a lot of empty space in the center of the image.  To make it more appealing to the eye, I moved the upper owl down to tighten up the space in between.  As long as it's not being sold or entered in a contest, artistic freedom is OK. 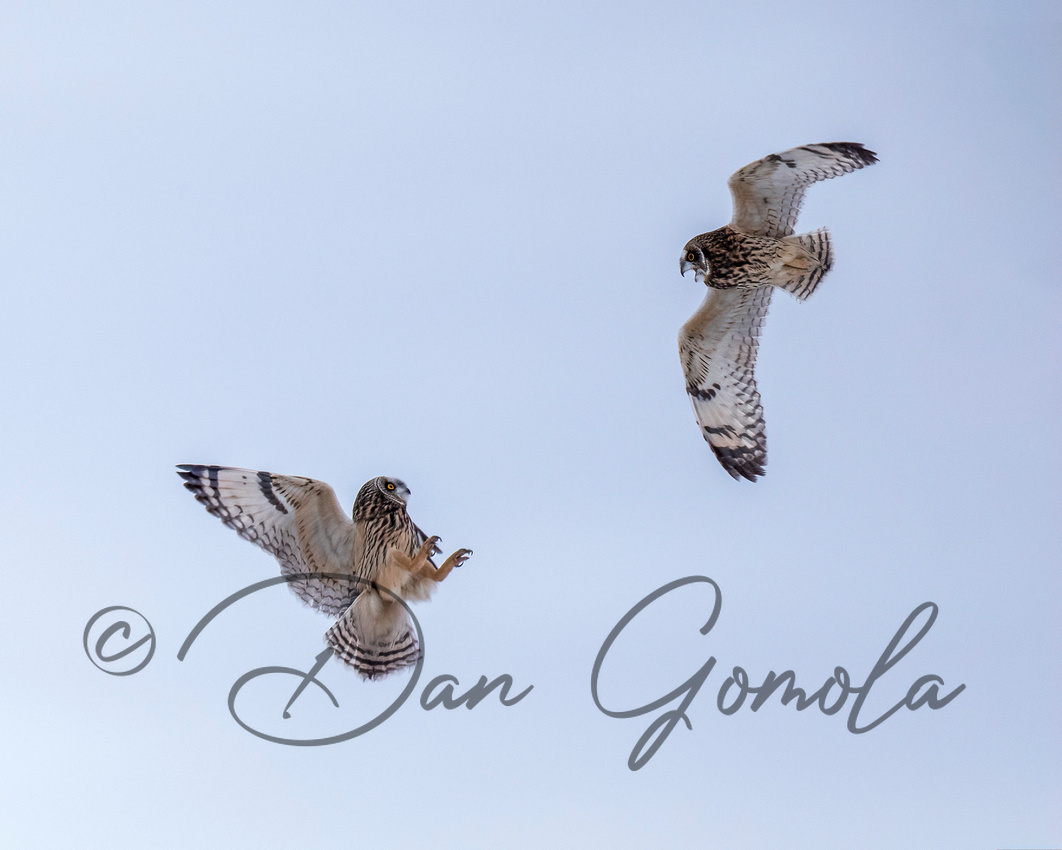 Here is another image of a dive for food. 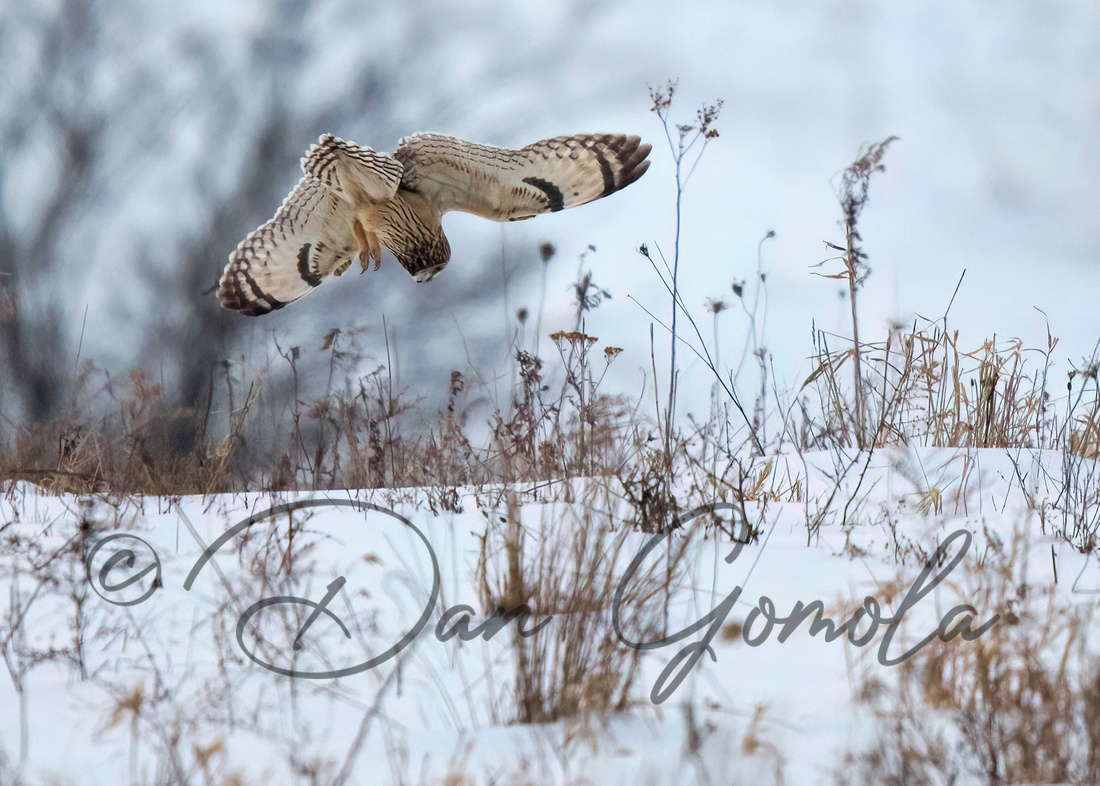 He stuck the landing during a snow squall. 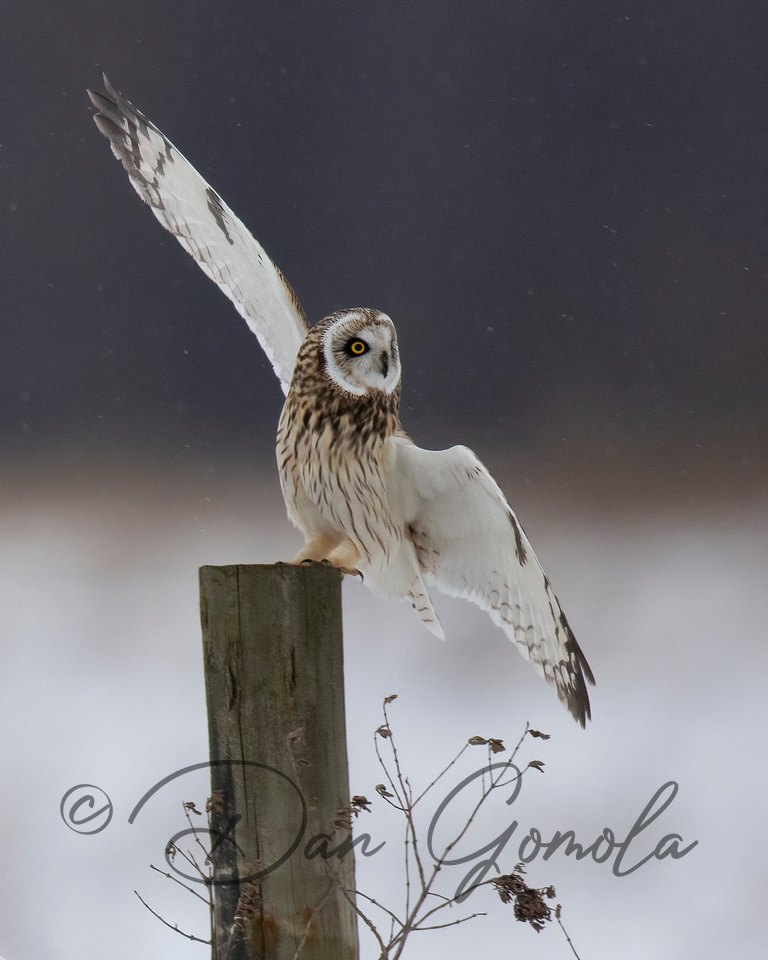 Here are a couple flying photos. 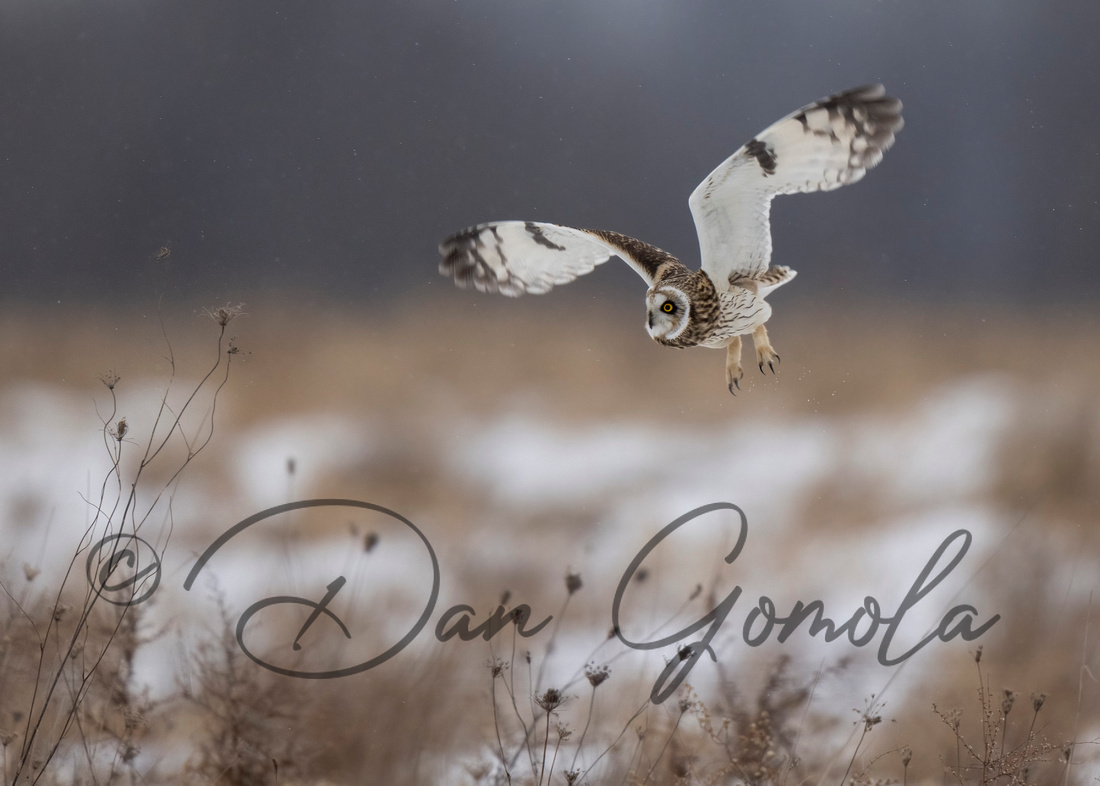 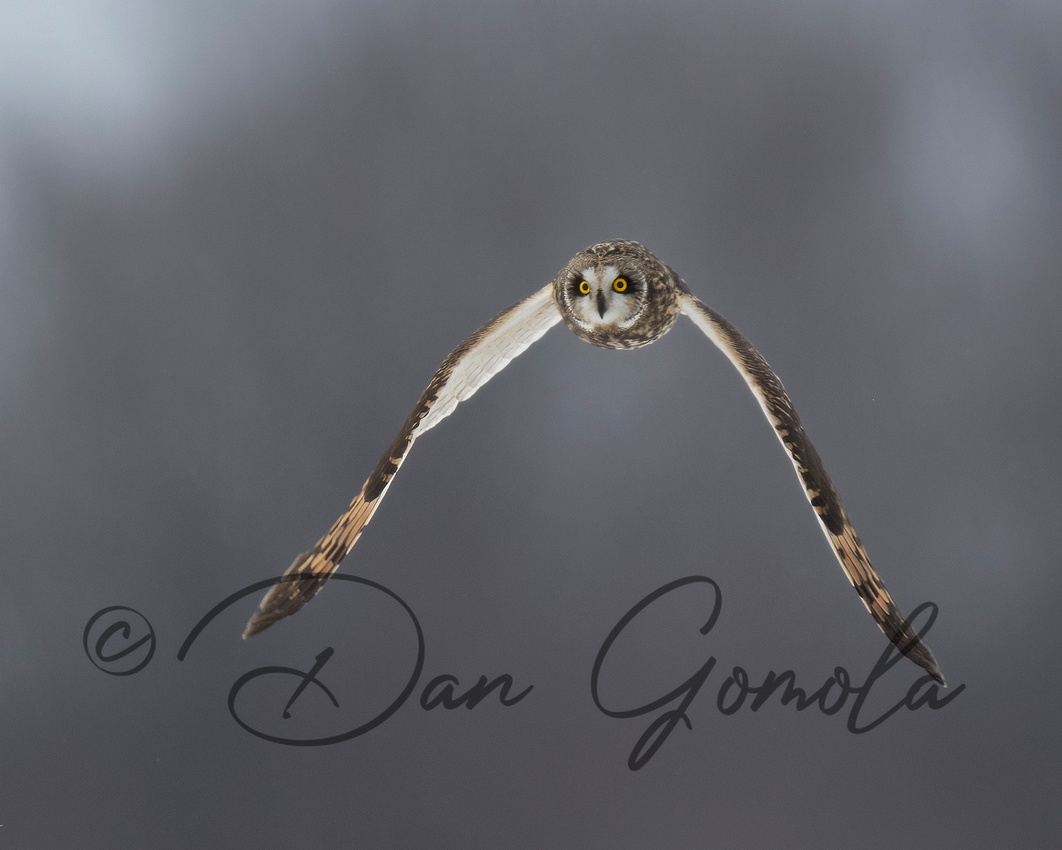 Thank you once again for viewing my photo essay.  I hope you enjoyed it.