Once our calendar rolls into August I begin to think about the upcoming elk rut in north central PA.  At that time of year, you may notice that several of the elk are losing their velvet that covered their antlers since they began to grow in the spring.  Once the velvet stops growing, the velvet will begin to dry up and crack and the elk will start to rub it off using branches and tree trunks.  The antlers will harden completely in time for the breeding season.

In mid-August, Elena and I usually make a trip to the mountains around Benezette to look for male bachelor groups.  I always hope to capture an elk in the middle of the short period it takes to rub their velvet off revealing the blood stained white bone.

Not long after arriving on this day, we found three bull elk laying in an opening of the forest.  This one has not begun to shed his velvet yet. 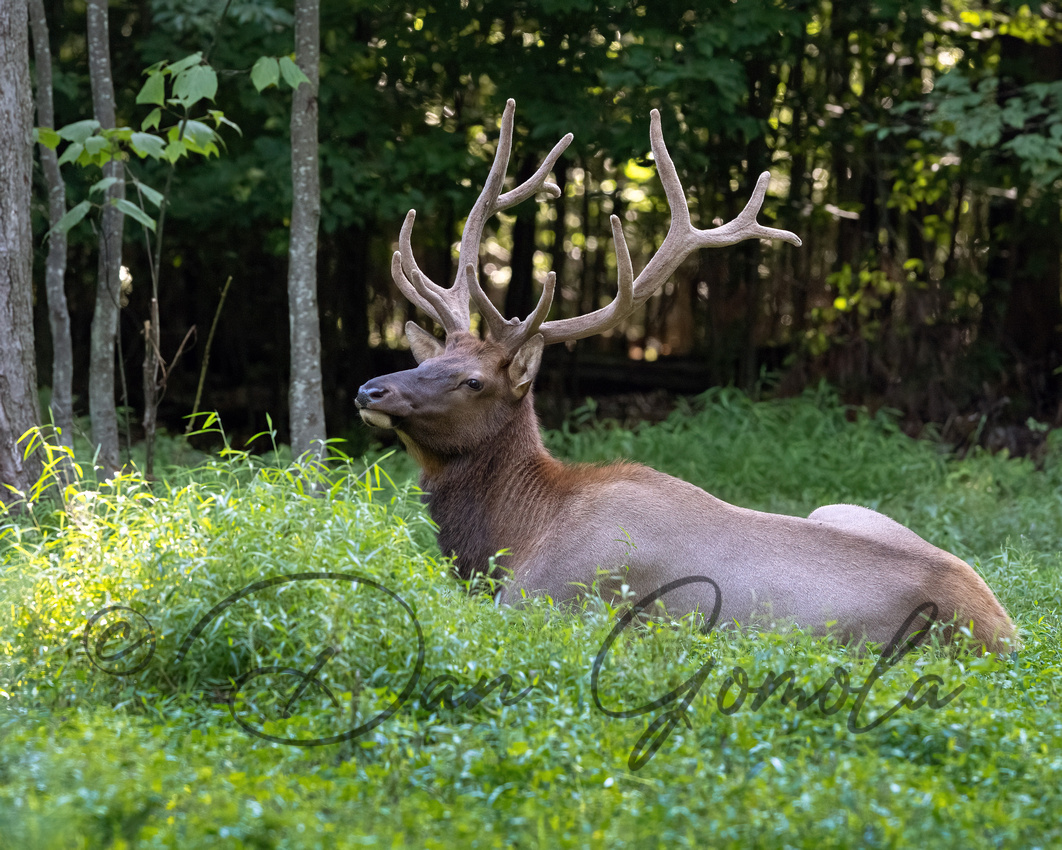 On this day, Elena and I took our two Shelties along for the ride and because of them, we got to photograph a large male Black Bear. Here's the story: 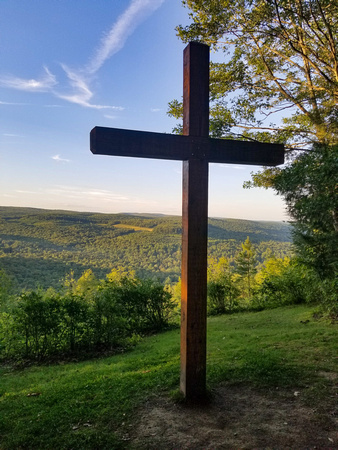 About 7:30 PM, we stopped at the "Cross on the Hill" along Mt. Zion Road to admire the scenery and let the dogs stretch their legs.  After spending about 15 minutes, the pups were panting so we made the short walk back to the SUV to give them a drink.  Once we got there, I told Elena that while she prepared their water dish, I would run them around the mowed grassy area on the hillside to give them exercise.  I got to the top of the hill, looked at the cross, and there was a large Black Bear standing at the cross.  Would've been nice to have a camera in hand! I ran back to the car, grabbed my camera, and went back up the hill.  He was walking along the woods not paying any attention to me.  If we would have stayed at the cross two minutes longer, he would have walked right up on us.  Next, we got into the SUV and drove up the road a couple hundred yards hoping to see him again.  There is a house about 200 yards up the road and the bear was under an apple tree eating apples. 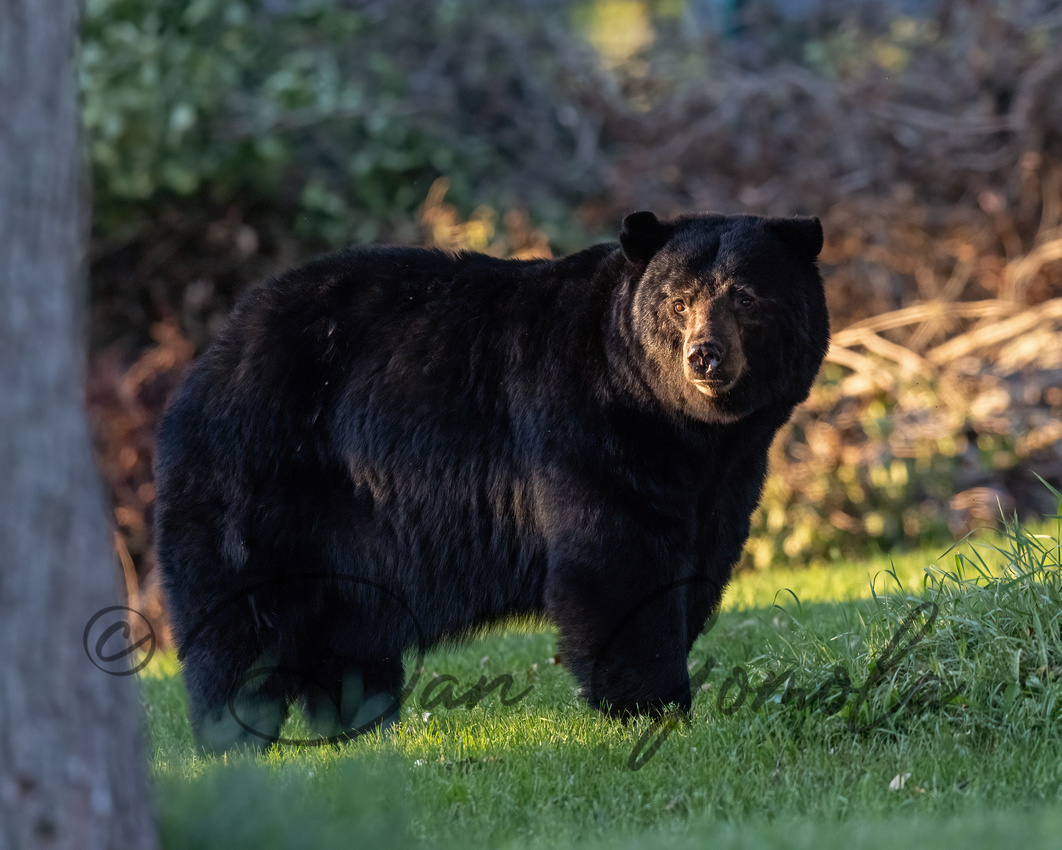 He looks like an old boy with a lot of battle scars. 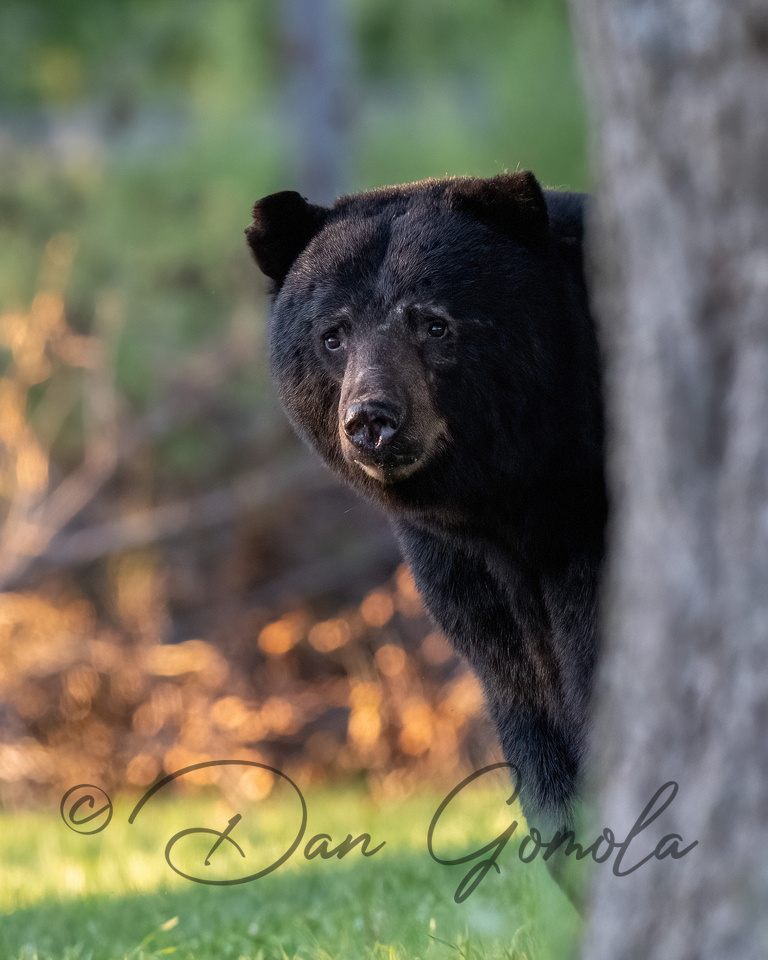 After about 10 minutes, the bear stared at the tree and had an idea. He climbed the tree. Once at the top, he began to shake the tree making several apples fall to the ground. 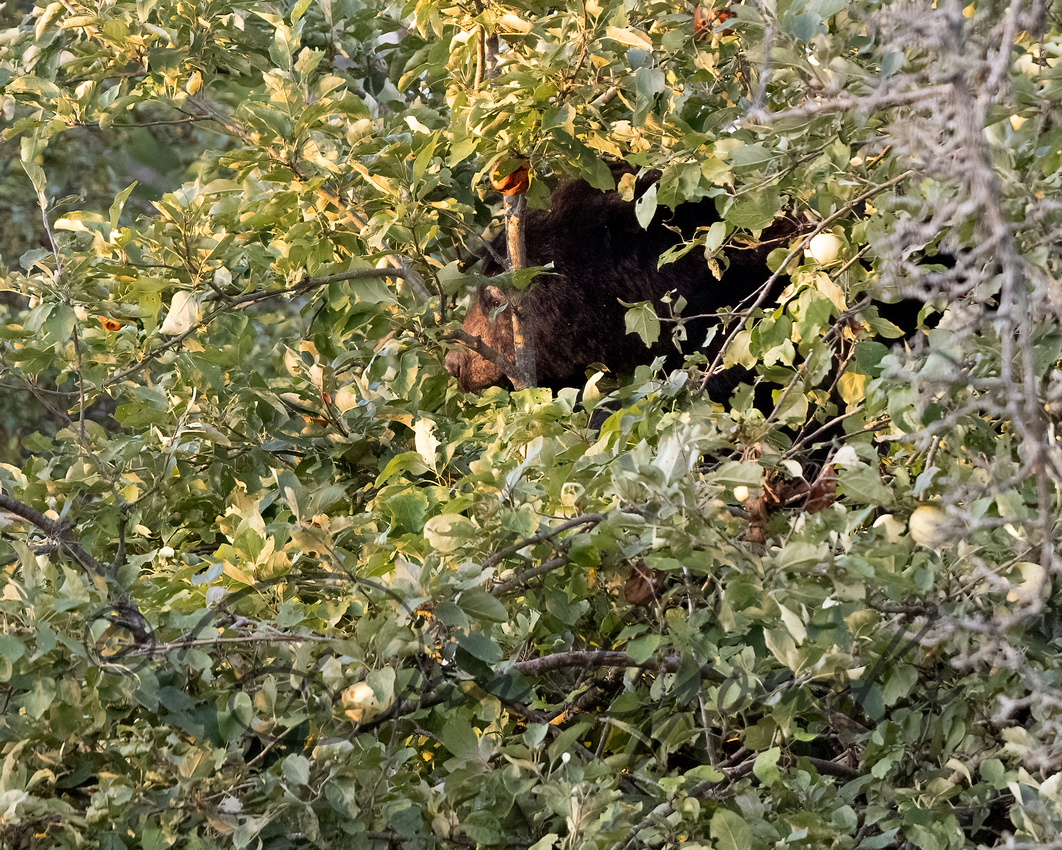 He climbed back down and ate more apples before walking back into the woods.

If it weren't for our two Shelties, we may not have been in the area and would have missed the bear. Plus, if they didn't need a drink, the bear would have walked right up on us and probably turned and ran, again, missing a photo opportunity.

Maybe we should take them on our adventures more often! 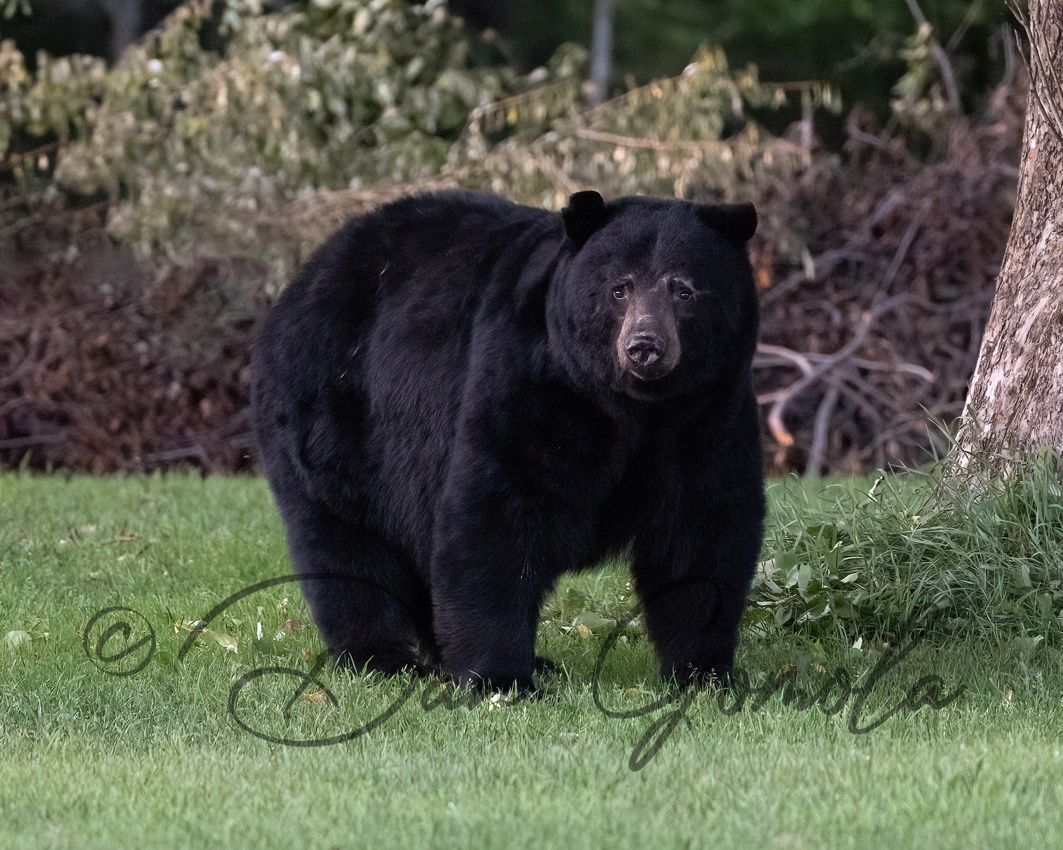 After our encounter with the Black Bear, we continued to look for elk.  We finally found a large bachelor group that were feeding in a field about 50 yards away and blocked by several trees and shrubs in between.  We parked our SUV and waited until a couple of them came toward the road where they found an apple tree growing near somebody's camp.

You can see the velvet beginning to split and fall off his antler. 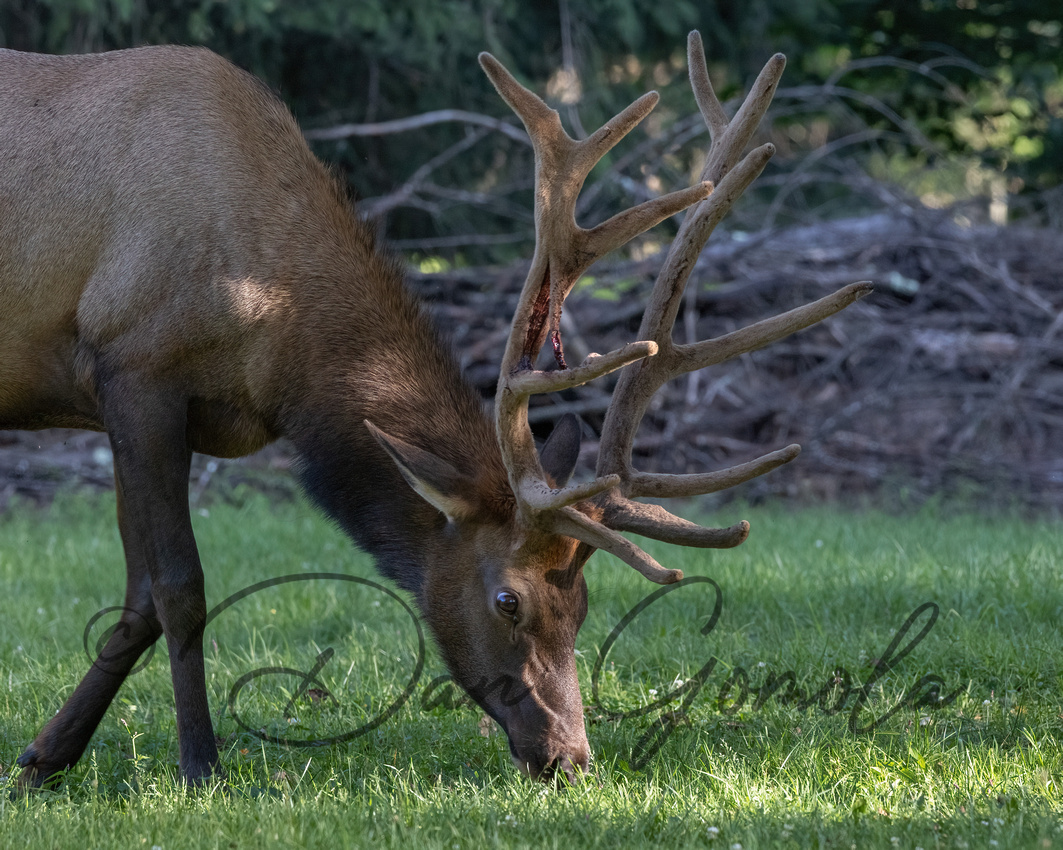 This bull had a really nice rack.  Hopefully we will see him again in the action of the rut. 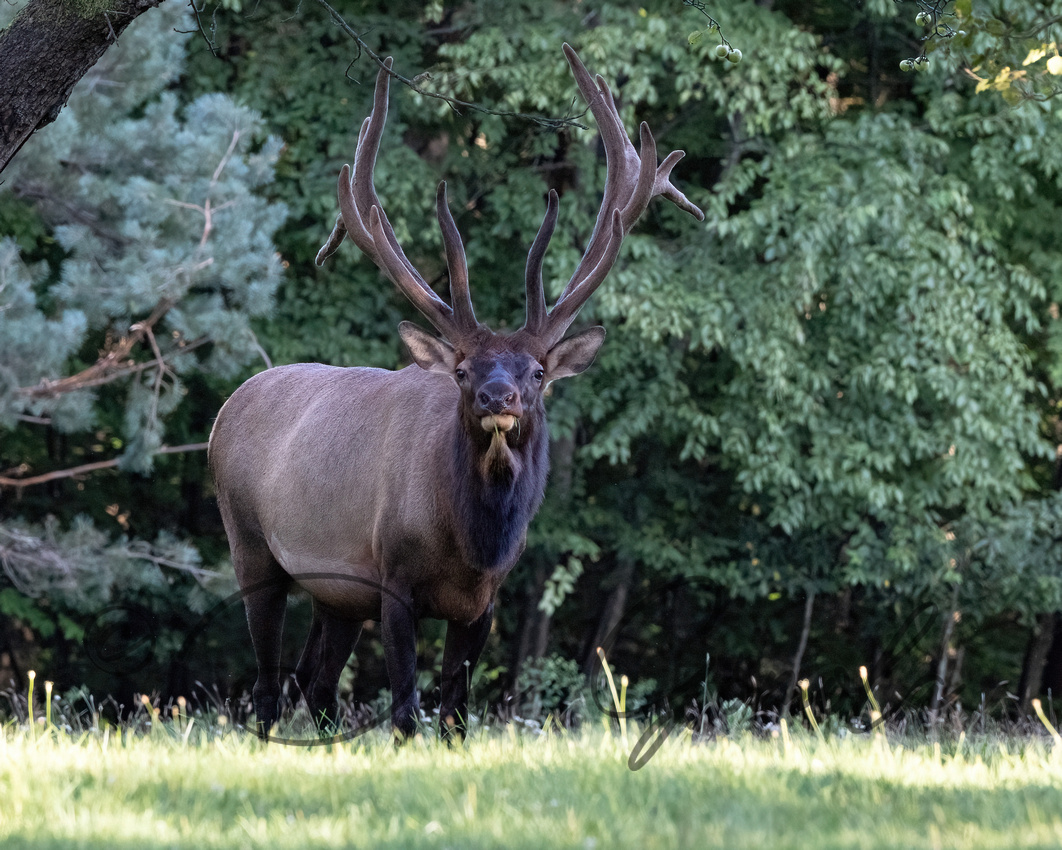 This bull was nearly rubbed clean with the exception of the velvet hanging on at the burr.  If they can reach it, the male elk will eat their own velvet as it is rich in protein. 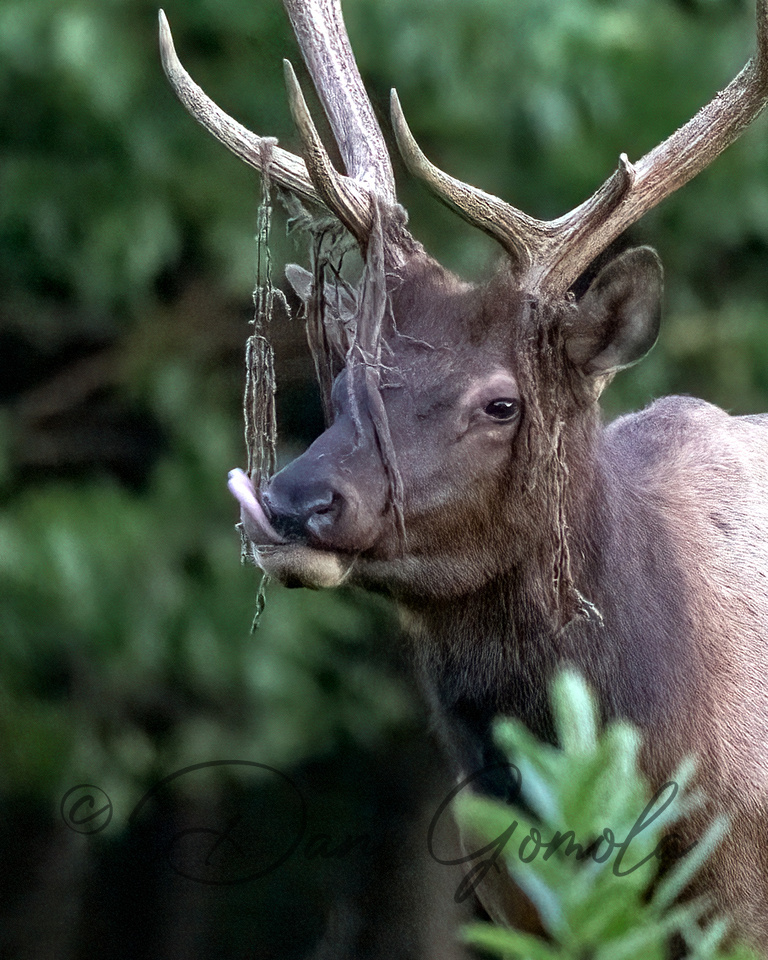 Not to be confused with a fight for dominance, sparring is a way for bulls to test their strength against peers in a casual setting. 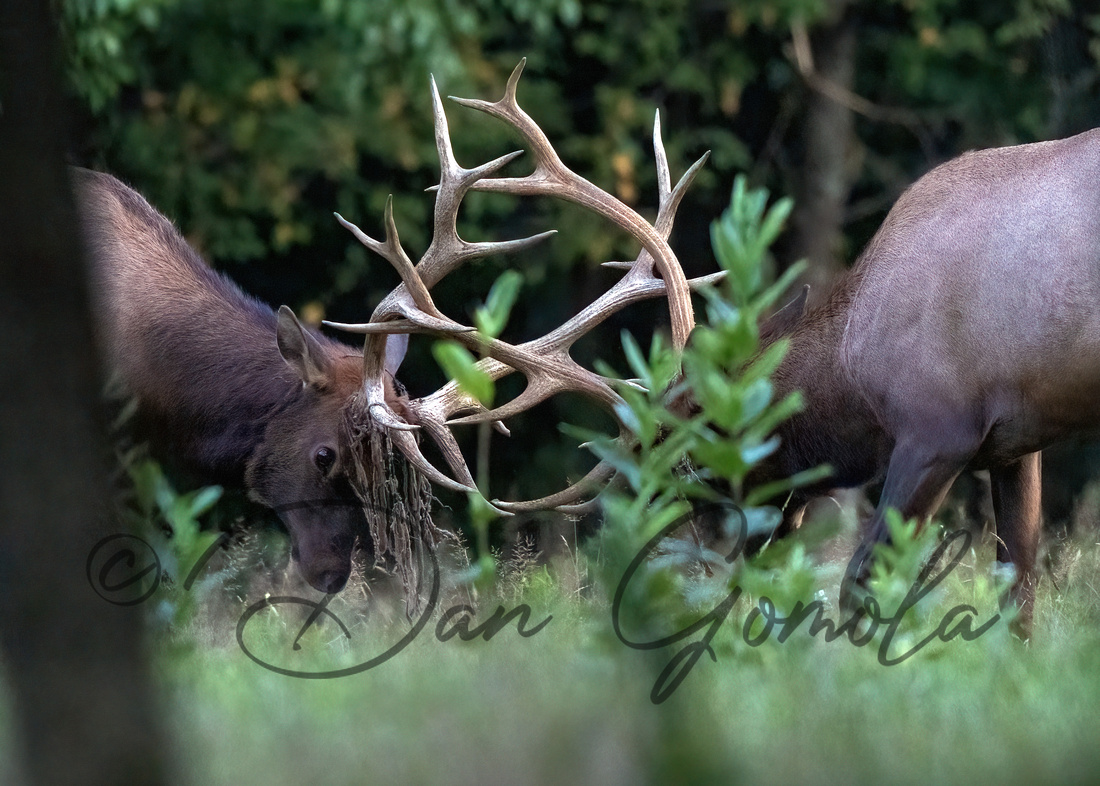 Down along the woods line, there was a bull elk polishing his antlers on an Eastern White Pine.  During the rut, you may see bull elk with dark antlers and white tips.  Elk rub small trees and bushes and the sap turns their antlers various shades of brown.  The sap from pine trees is believed to cause the darkest stain.

It was darker outside than it looks in the video.  You can hear noises of the evening woodlands and even a whinny of an Eastern Screech Owl twice.  Click on the video to begin.
 American Elk

We got one more look at a different bull before it got too dark to photograph. 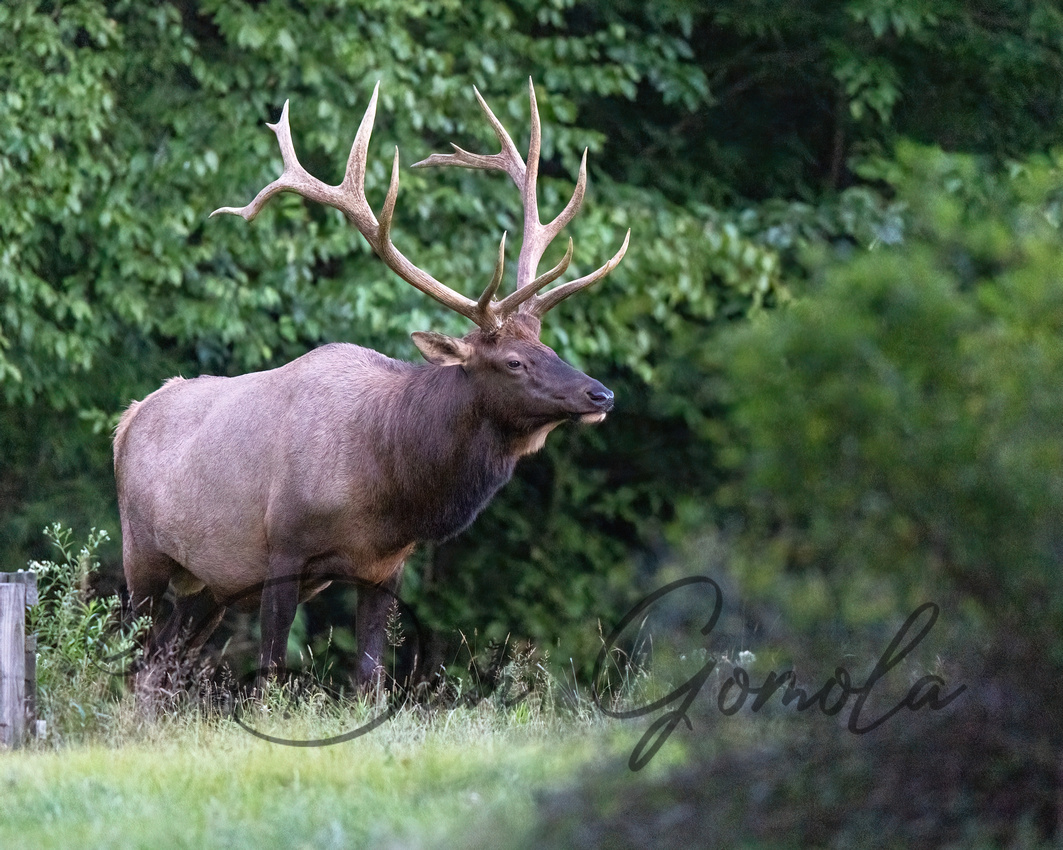 The calendar flipped a month into September and photographing the Elk rut was not looking good for me. High heat in the first half of September and then a busy work schedule the third week of September kept me at home.  This was turning out to be an off year, the elk just weren't around Benezette unless you went to the Visitors Center, and I couldn't make time to explore other locations.

On Tuesday, September 28th, Elena and I finally got to spend a day in Elk County.  After scouting the normal hot spots in the Benezette area and not seeing any elk, we ended up at the Visitor's Center where we saw two bulls and about 15 cows. After the bigger bull chased the smaller bull out of the field, I photographed him looking into the setting sun. 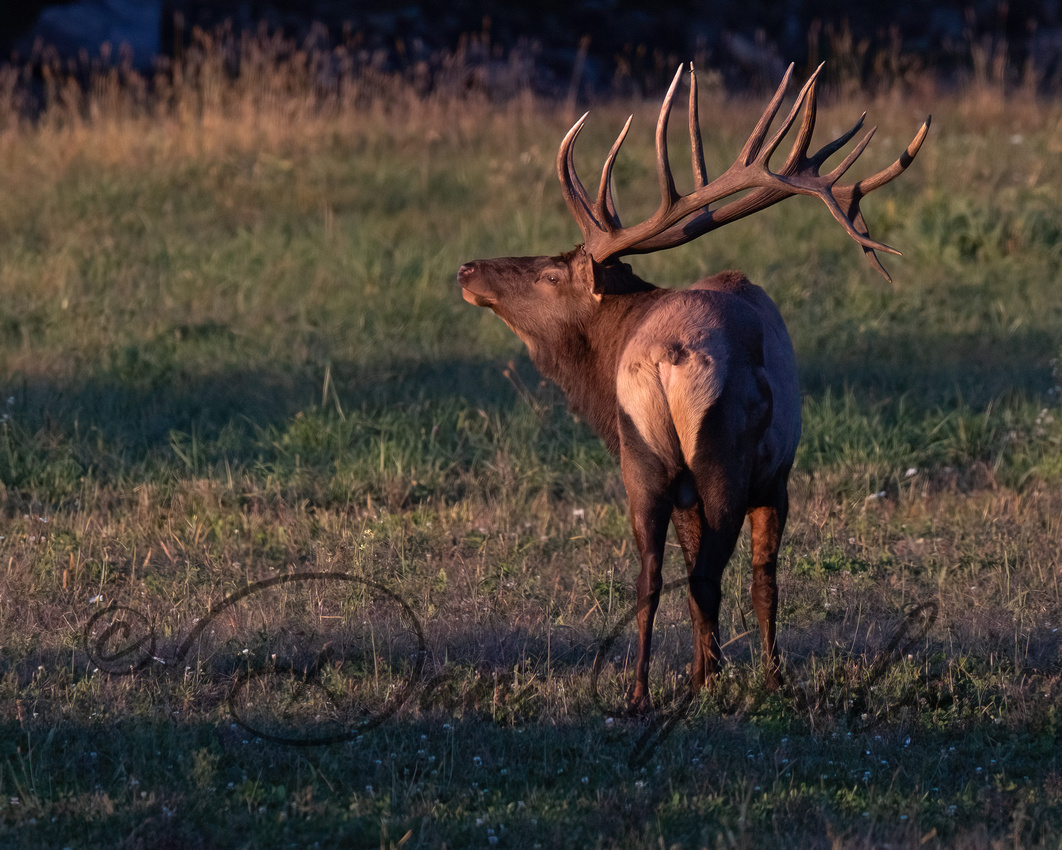 During the second week of October we finally got to do an overnight trip to Elk County.  Although the heart of the rut is over and the opportunity to photograph a fight for dominance has most likely diminished, we hoped we would still see some herding of cows and hear some bugling.  On the afternoon we arrived, we found a large herd of 27 cow and calves and two bulls.  The biggest bull, pictured below, kept the smaller satellite bull at bay most of the night. 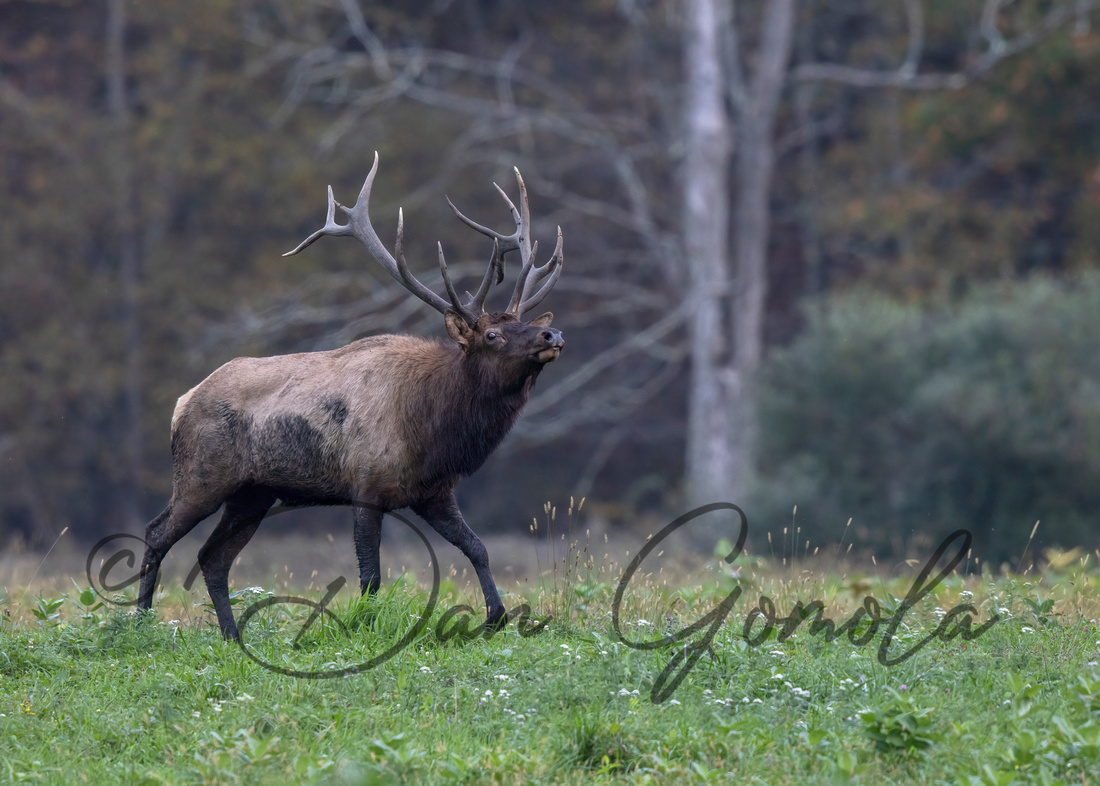 He walked around his herd looking for females in heat.  He sniffed them as he walked past and sniffed the ground where they had laid.  He also licked and sniffed her hind quarters as he followed.  I have written about their mating behaviors more extensively in previous elk related blogs so I won't go into detail here.  Bottom line, they are all ways to determine if the cow is ready to be bred. 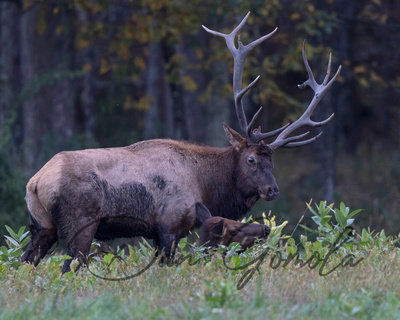 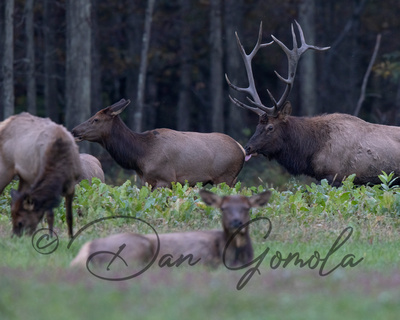 When his attempts to get close to a cow were rejected, he stopped pursuit and bugled. 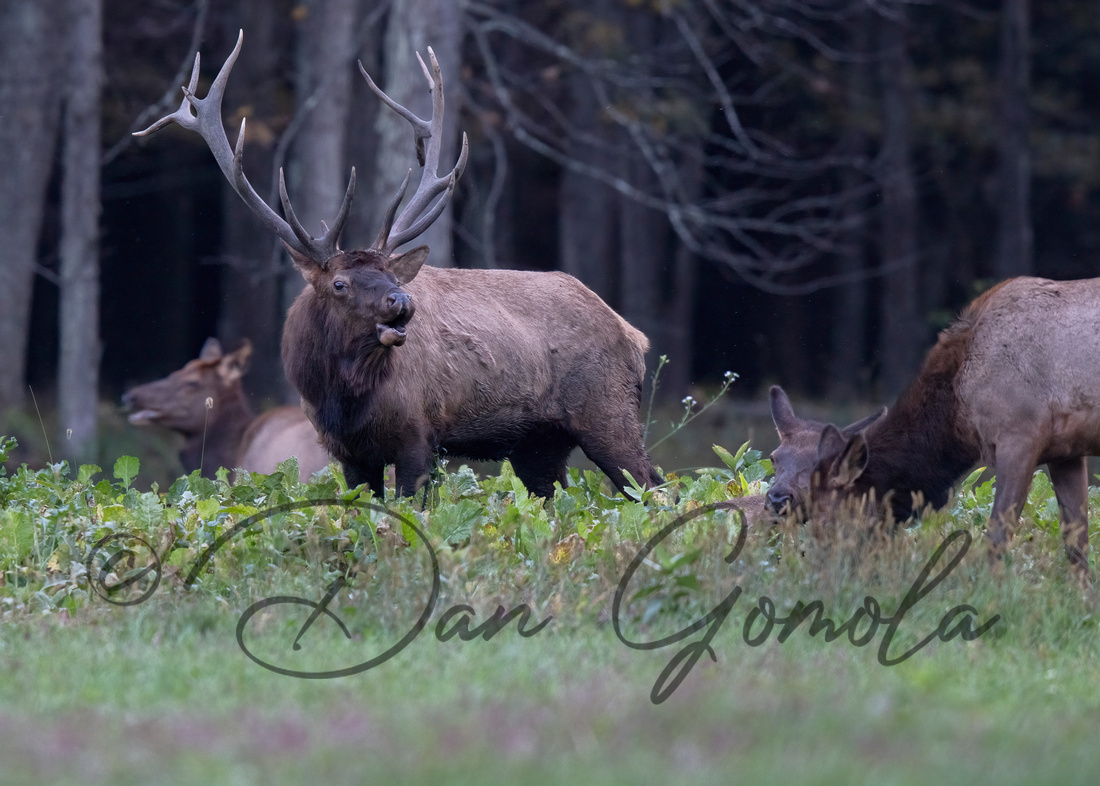 While the bull runs around the field chasing cows, the rest of the herd continues to eat.  Here is one of this year's calves as it looked toward me. 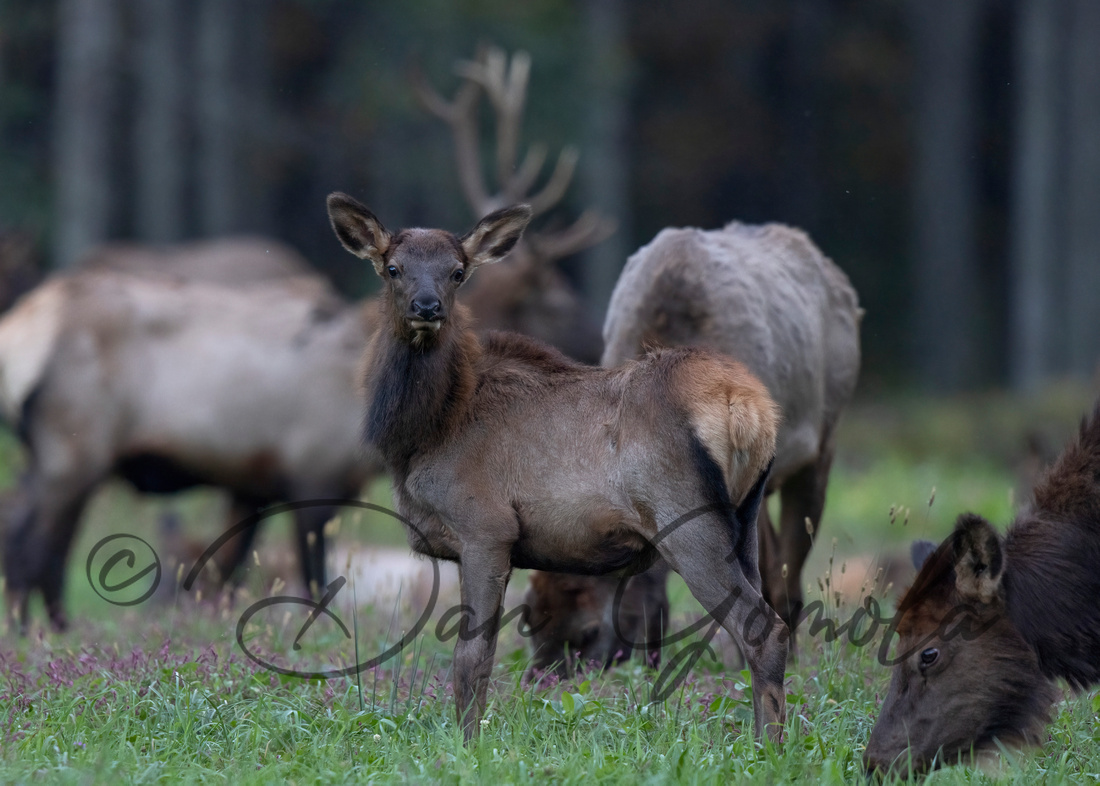 It was getting dark when our dominant bull found a cow that was in estrus and followed her closely for about 20 minutes. 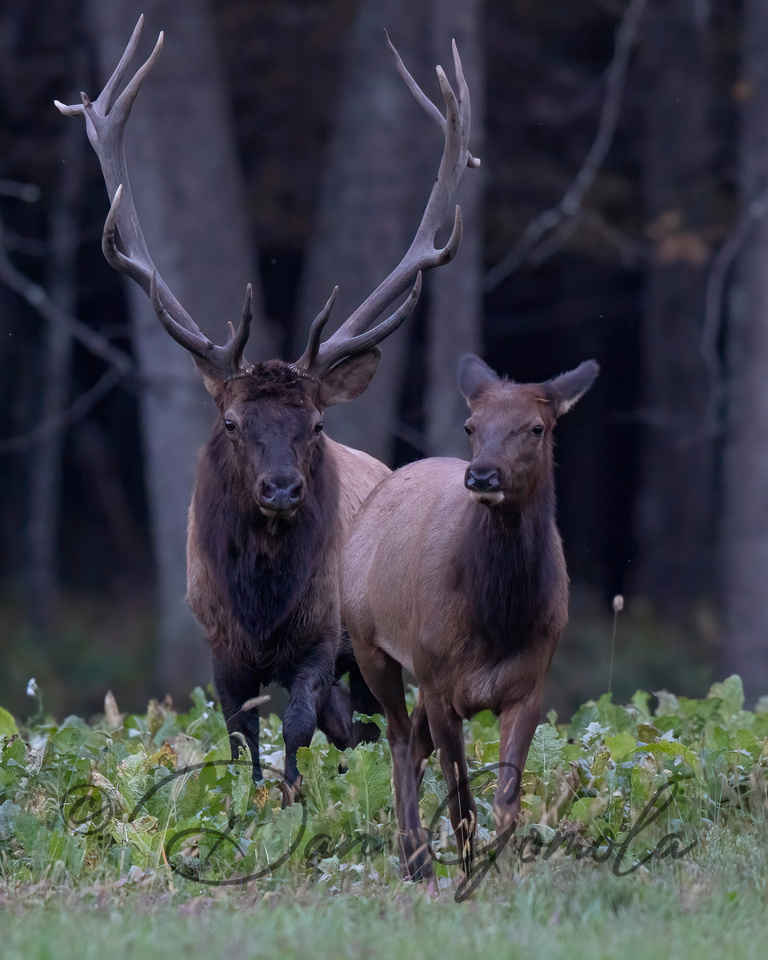 In those 20 minutes, he attempted to mount her several times.  She was receptive but he would slide off her back and she would walk away. 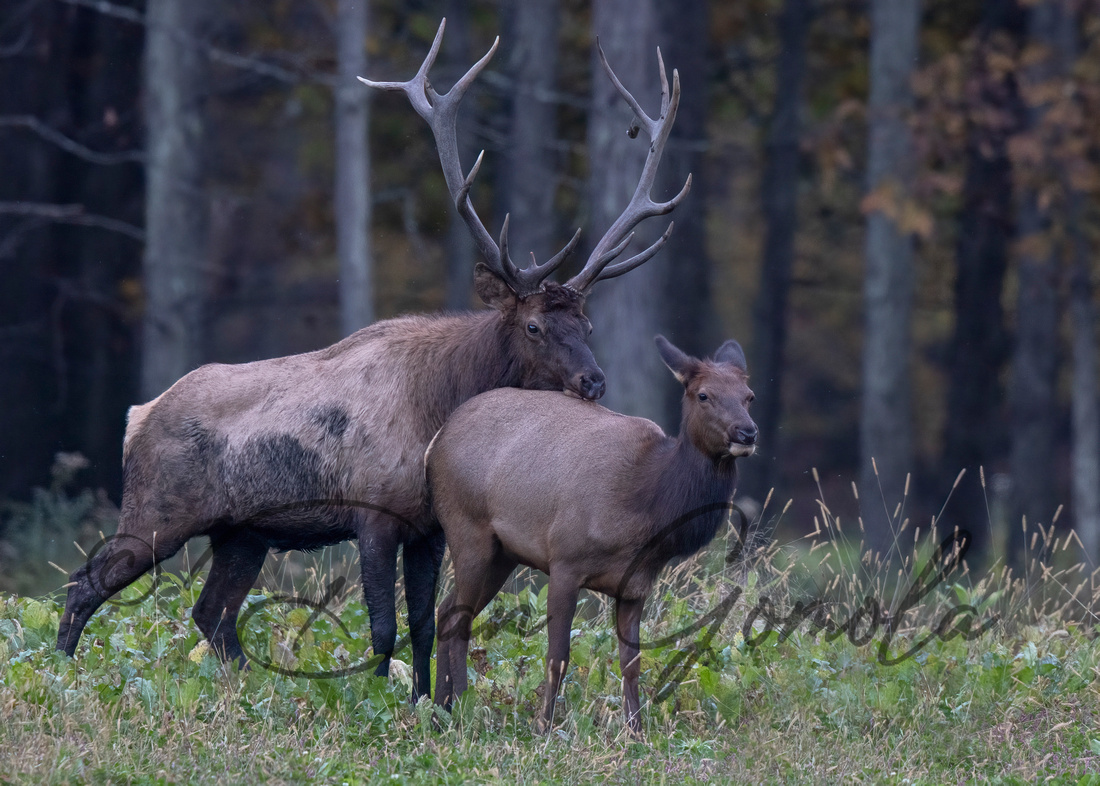 Finally, he was able to complete the act.  I don't know if you've ever seen it in person but it happens quickly.  When it ends with the bull jumping off the ground, you know he completed the act. 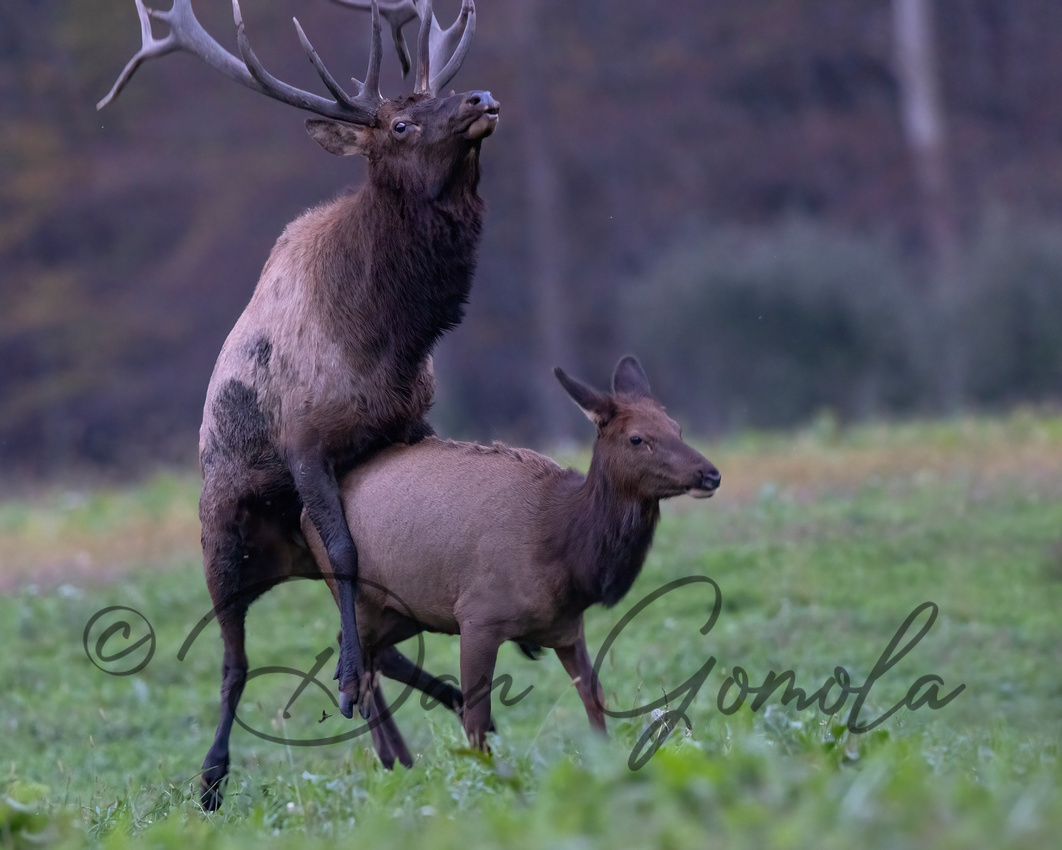 The next morning, Elena and I went to the same location we were at the previous evening.  It was 7:00 and it was light enough to see the shapes of the elk in the field.  As soon as I got my gear assembled, the elk disappeared into the woods.  They headed toward the Bennett Branch of Sinnemahoning Creek so we went there to watch for them to cross. They traveled too far downstream so we didn't see them cross.

During the day, we had a great time exploring the back country where the elk are wild.  Saw a nice herd of three bulls and several cows and calves. Of course, they hustled into the dark forest for safety.

I did manage a photo of this cow eating the fruit of some bushes growing near the road. 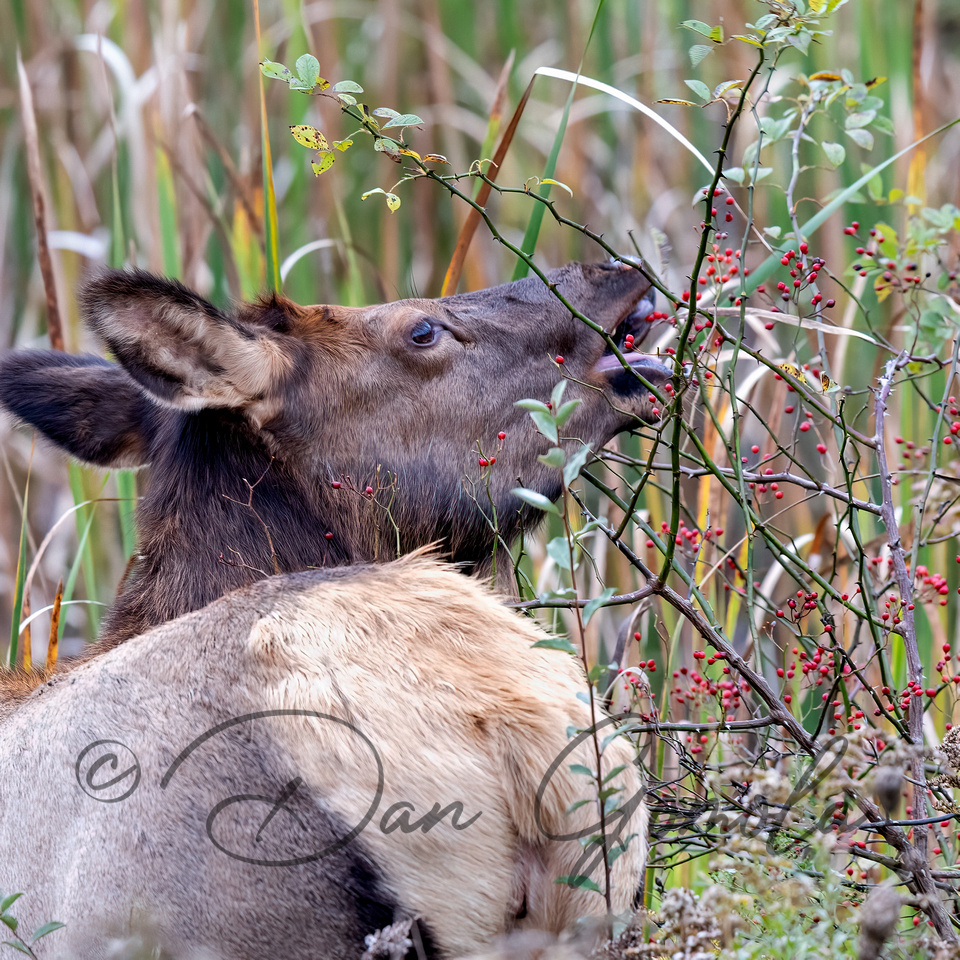 Our plan for the evening was to first check out the creek because if they did cross in the morning, they would have to cross back to get to the food plot.  It was 4:15 in the afternoon so we thought we'd have a good hour to wait for the elk to arrive, we were surprised to find a large herd already standing in Bennett Branch.  In the following photo, the dominant bull is pushing the last two of 27 cows and calves into the water. 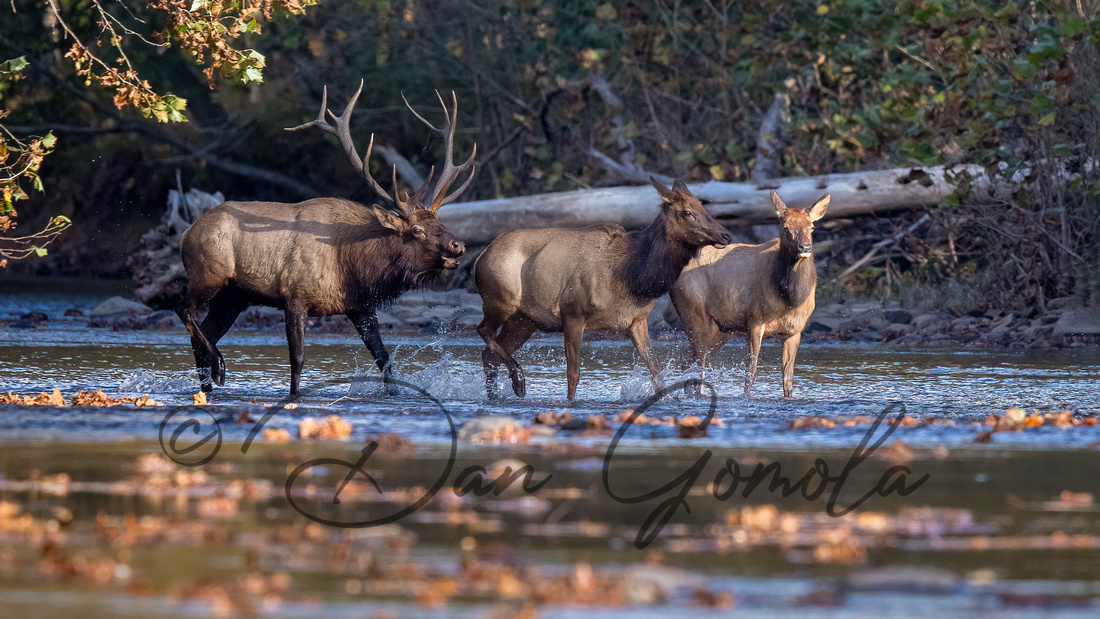 They stood in the water about 20 minutes after we arrived.  Here is a cow Elk and her calf during the crossing. 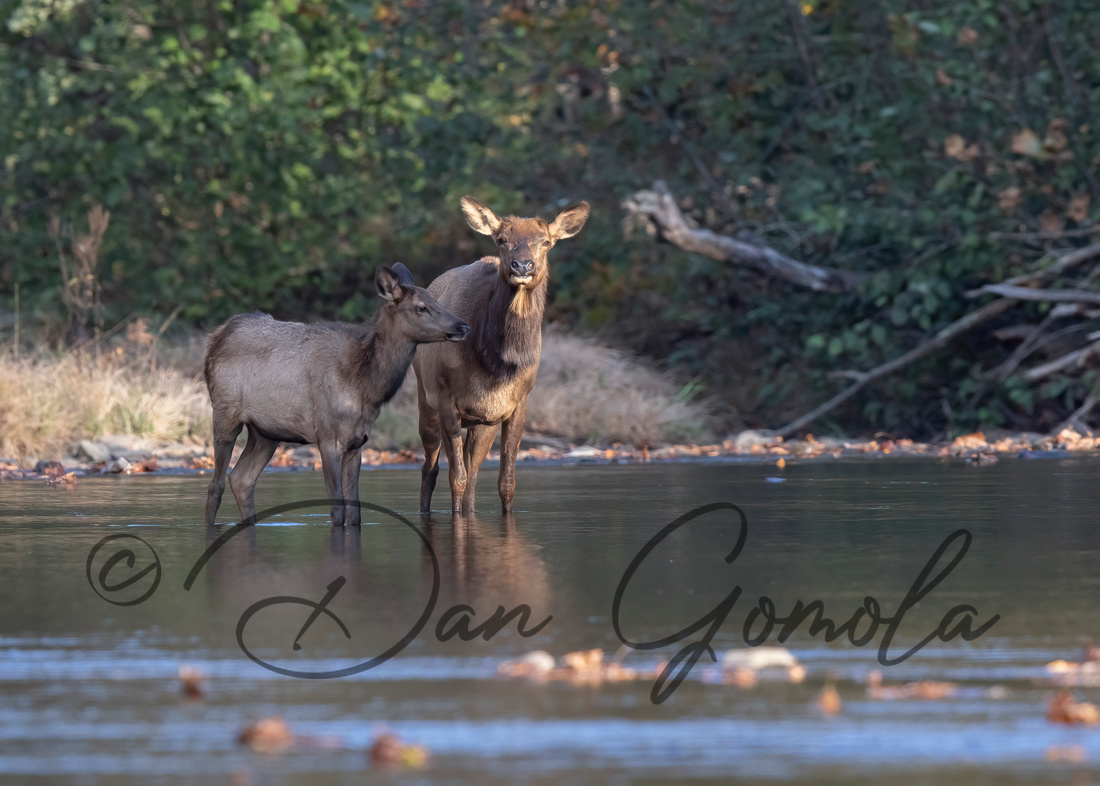 This is the younger and smaller satellite bull that travels with the herd.  The dominant bull has been very protective of his haram and does not allow him to join. 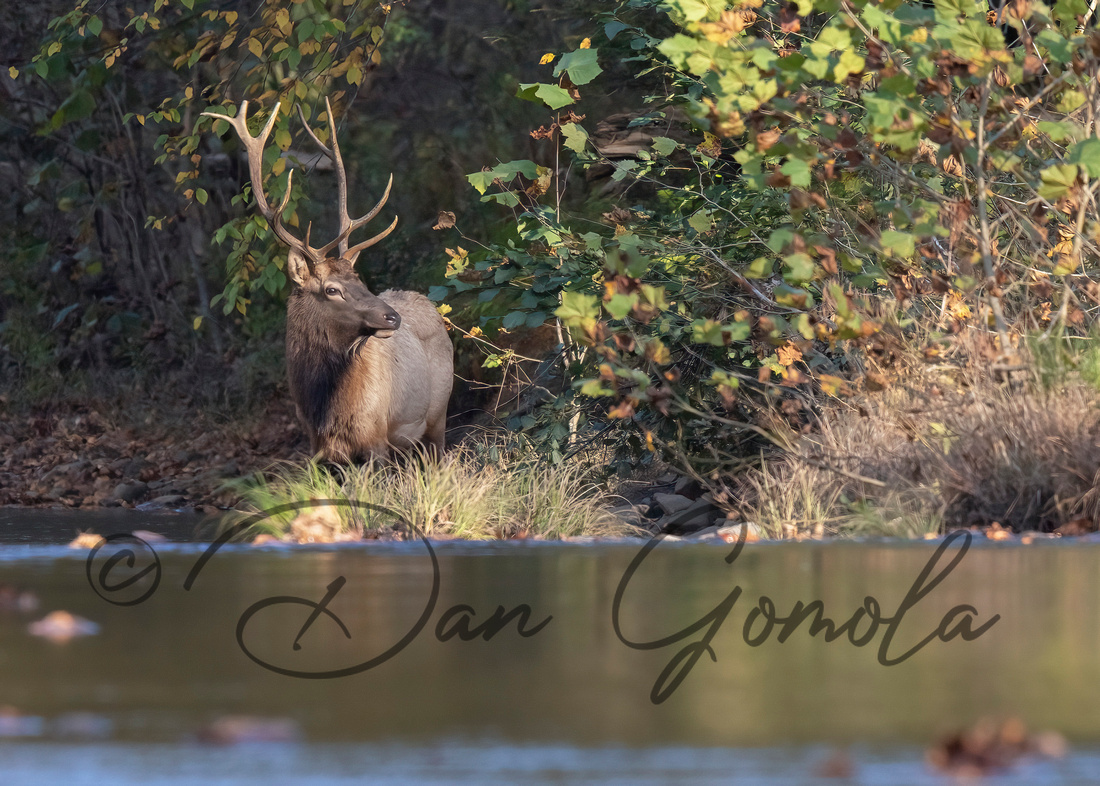 After about 20 minutes the bull continued to move them out of the stream and into the field and food plots. 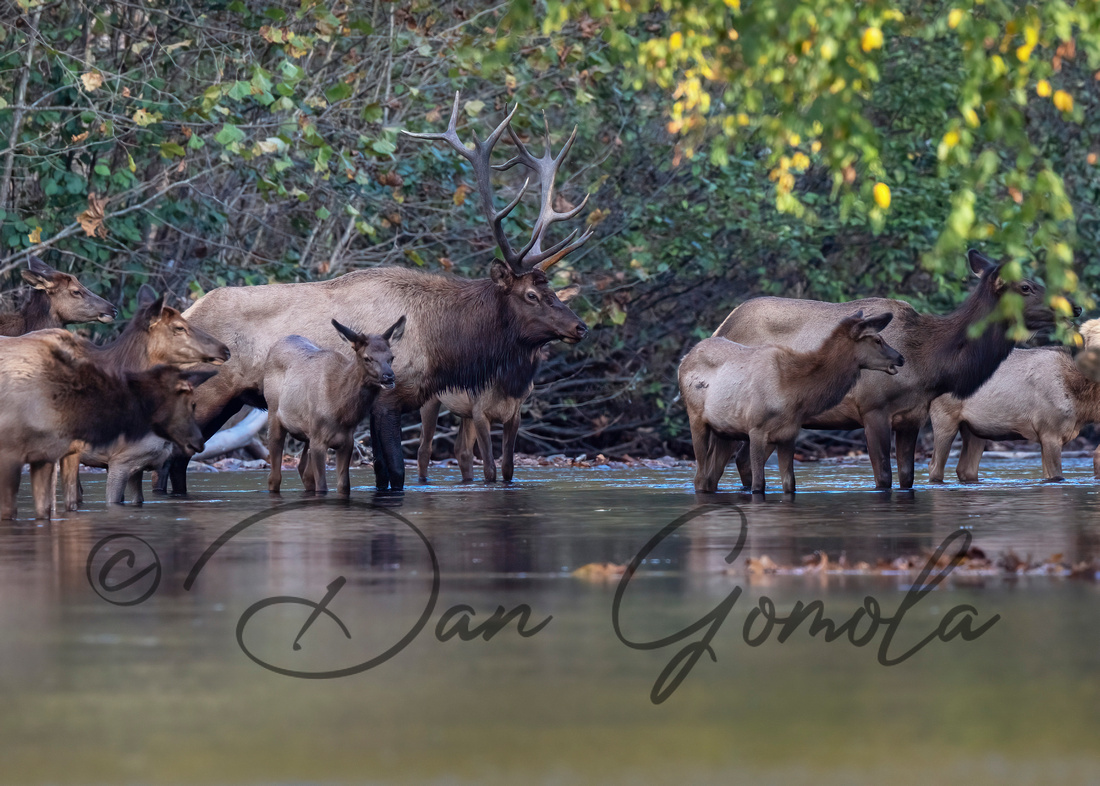 Once in the food plot, nourishment was the main objective of the cows and calves.  As for the bull, it was status quo.  No wonder they lose so much weight and sleep during the rut. 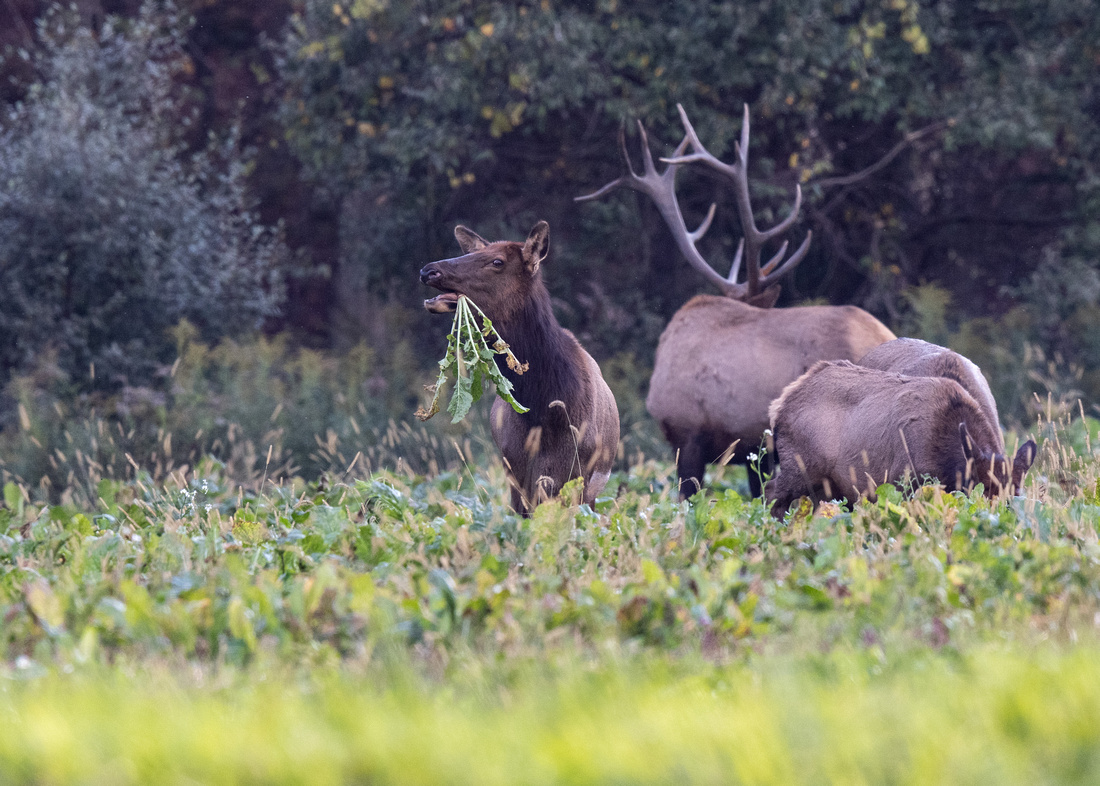 That's it for our late 2021 Elk County adventures.  I hope you enjoyed the experiences I shared.