Photographing warblers brings about many challenges.  Some warblers, like the Mourning Warbler and Kentucky Warbler,  can be found low to the ground in dense thickets or dark woodlands. 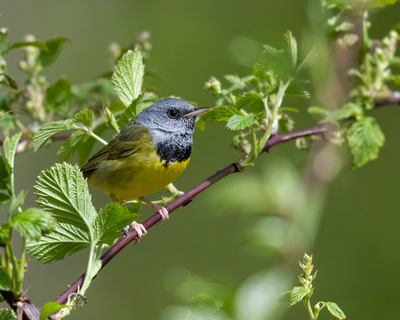 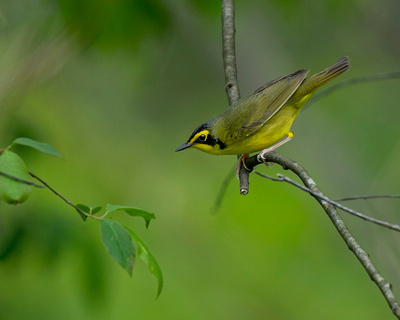 While other warblers, like the Cerulean Warbler and Yellow-throated Warbler, prefer to stay in the upper canopy of our forests providing a challenge for even the keenest birdwatchers.  Whether you're a birdwatcher or a bird photographer, you've probably experienced "Warbler Neck".  That's when your neck begins to ache because you are walking around looking straight up all day.

I like to photograph birds when they are hunting for food.  Sometimes, they come pretty close providing good photo opportunities. This warbler has a habit of working its way from the beginning of a branch to the end as they veer upward into the canopy.  That is the behavior I caught this male doing.  He was inching his way to the end of the twig inspecting each leaf for insects along the way. 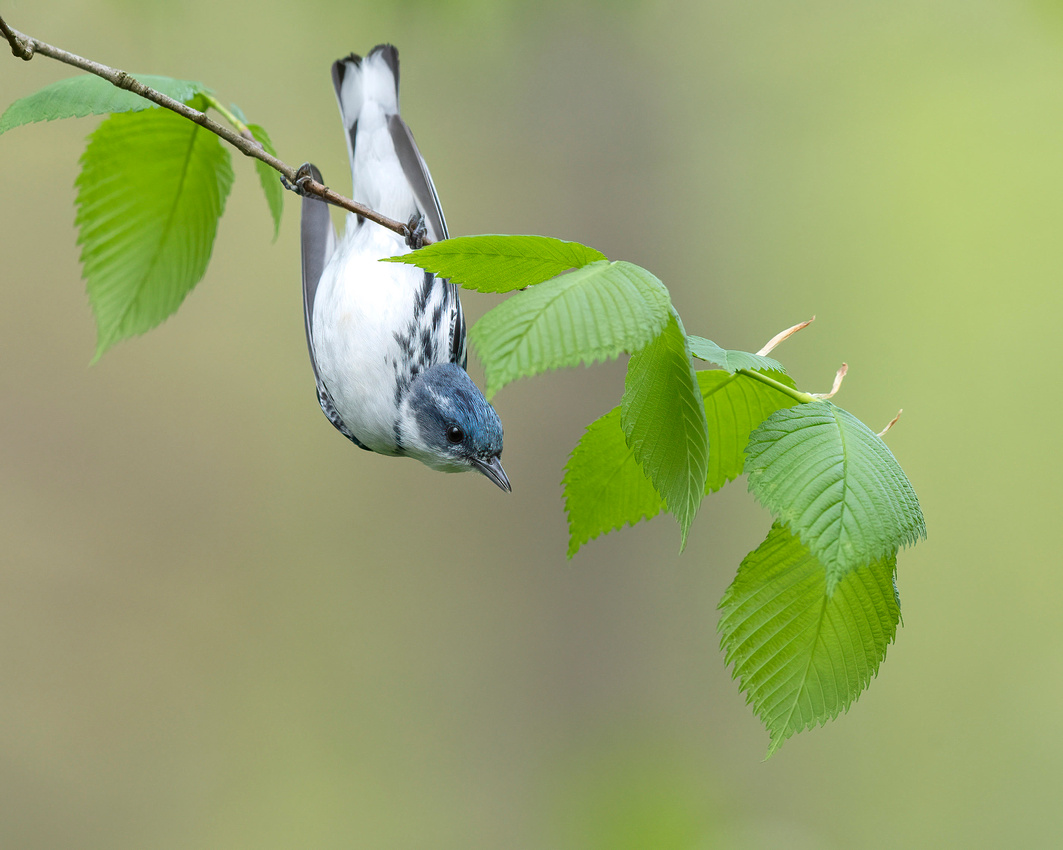 This little guy will fly a long way from Pennsylvania to where he'll spend the winter in the Andes in South America. 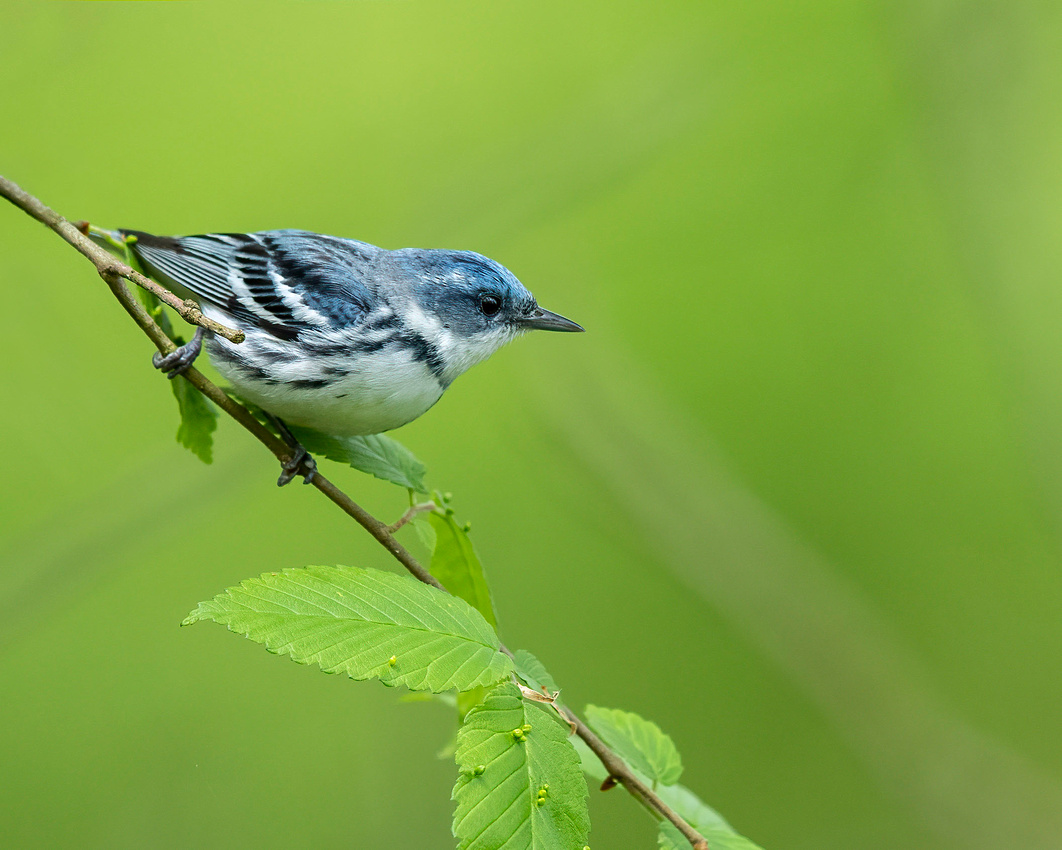 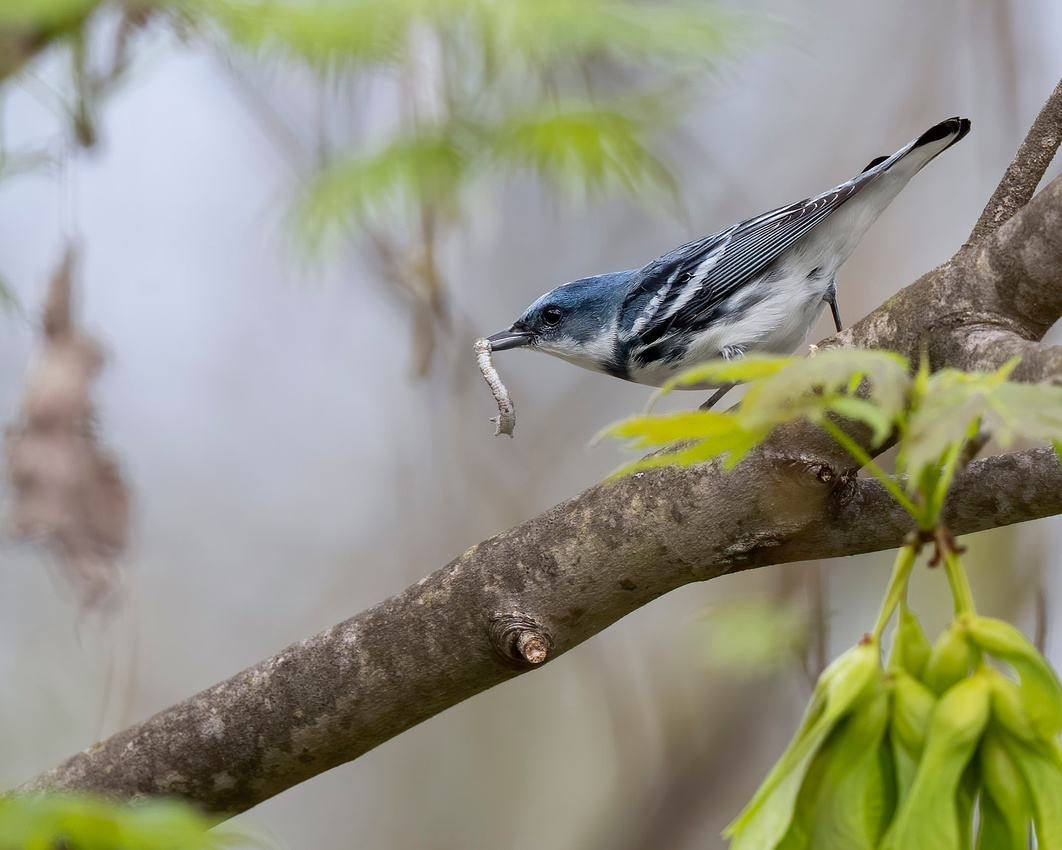 Male Cerulean Warblers sing a buzzy song that ascends to a buzzy trill. 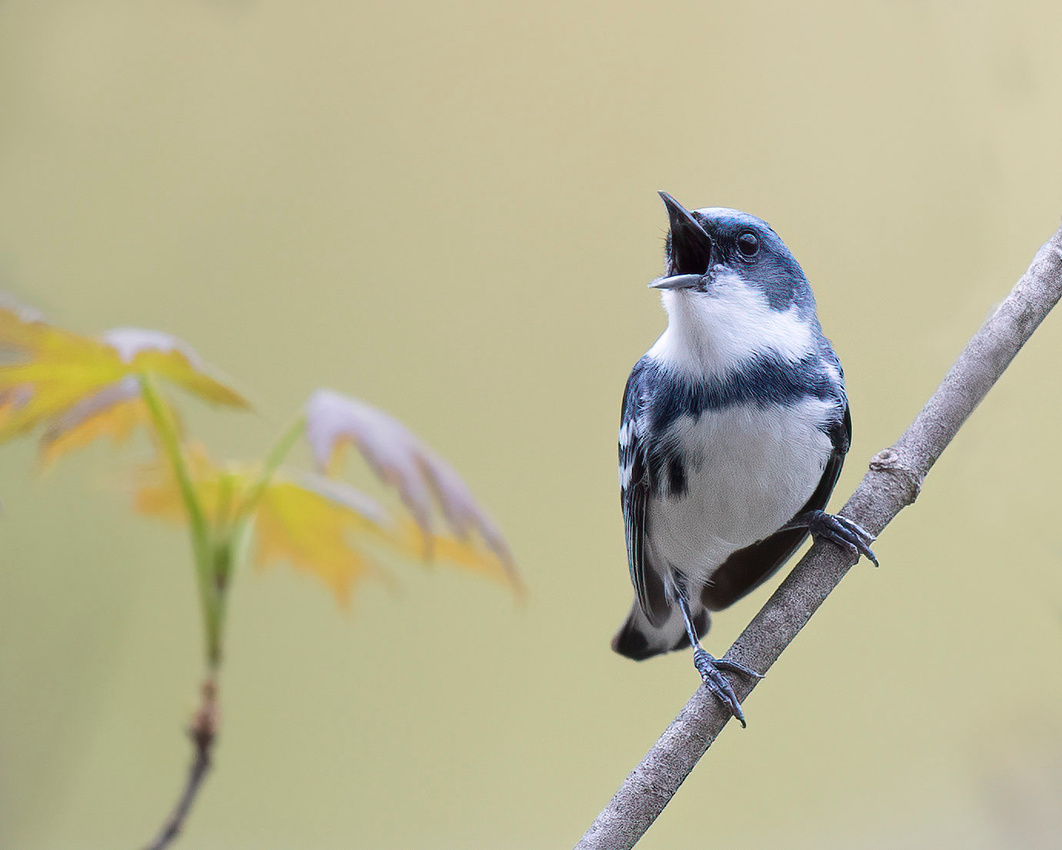 I mentioned earlier that the Cerulean Warbler spends most of its time high in the treetops.  The Yellow-throated Warbler does as well.  So why do my photos look like I was right up in the trees with them?

I look for their preferred trees growing below a hillside or a bridge so I can position myself high enough, offering a better chance of being eye level.

One of the preferred trees of the Yellow-throated Warbler is the Sycamore.  There must be a lot of insects nestled inside those seed pods because they spend a lot of time checking each one. 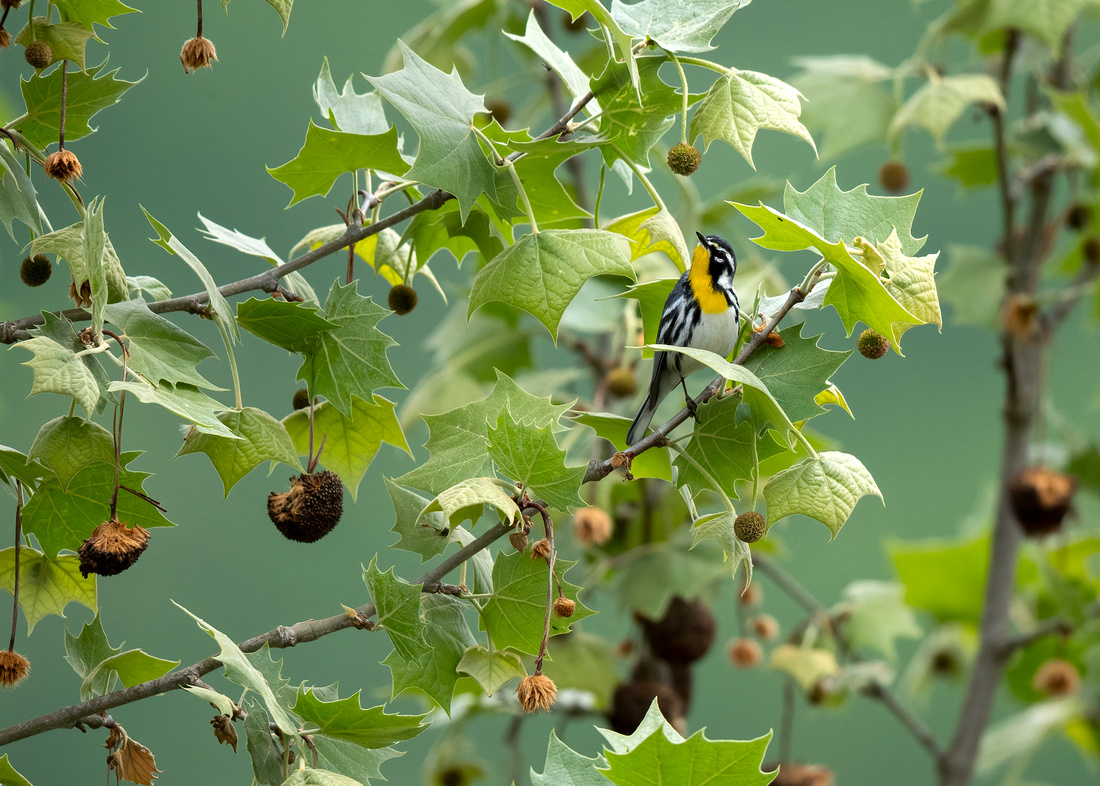 Starting at the bottom, the Yellow-throated Warbler creeps up branches much like a Black-and-white Warbler or Brown Creeper pulling out insects with its long beak. 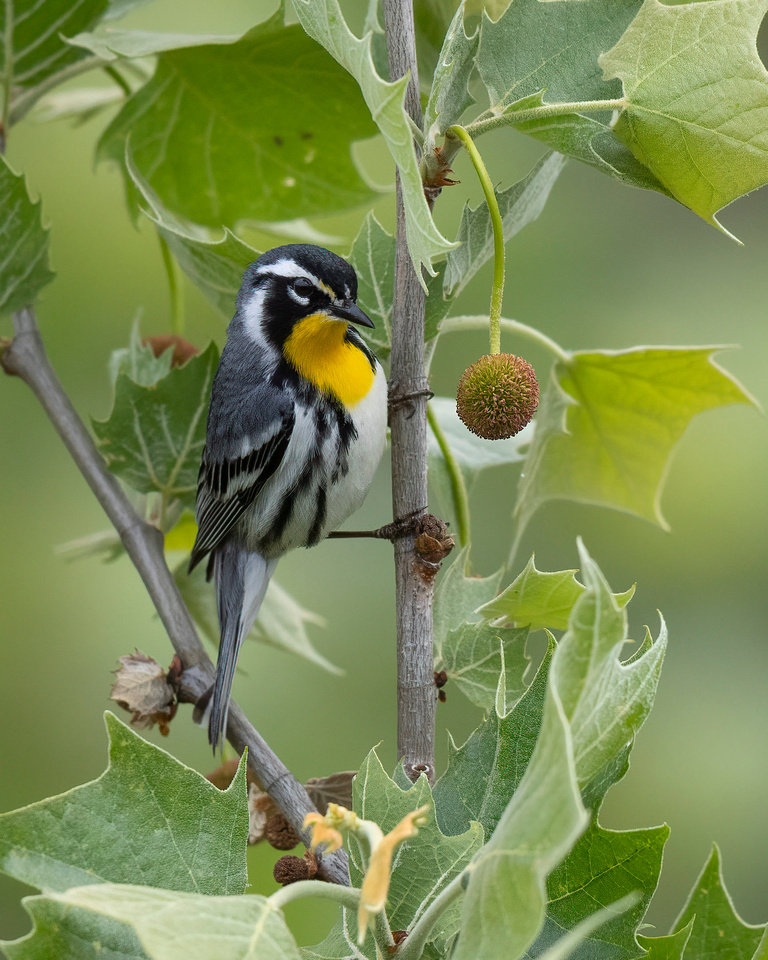 I didn't know how to describe the song of a Yellow-throated Warbler so this is the description from the Cornell Lab of Ornithology website.  A male Yellow-throated Warbler's song is described as a series of clear notes that roll into each other, dropping slightly in pitch, but sometimes ending with one higher-pitched note. 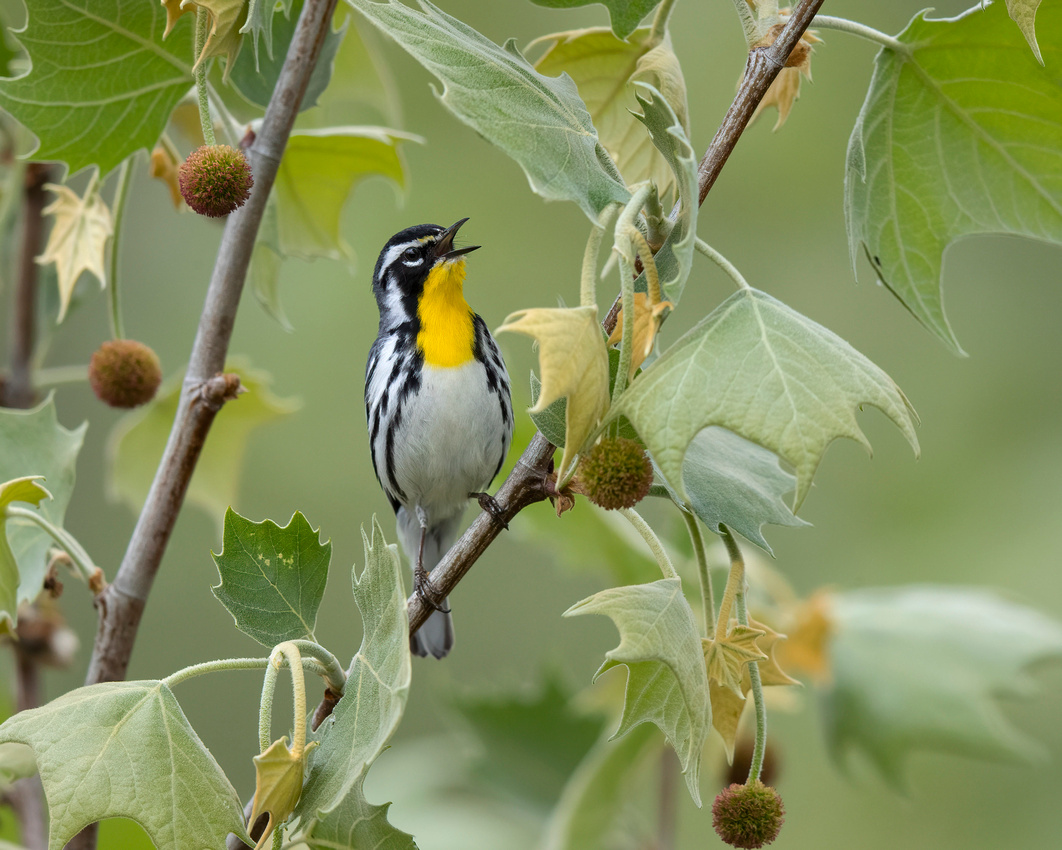 These tiny birds reach to great lengths to find food then perform a little acrobatics to see where they will go next. 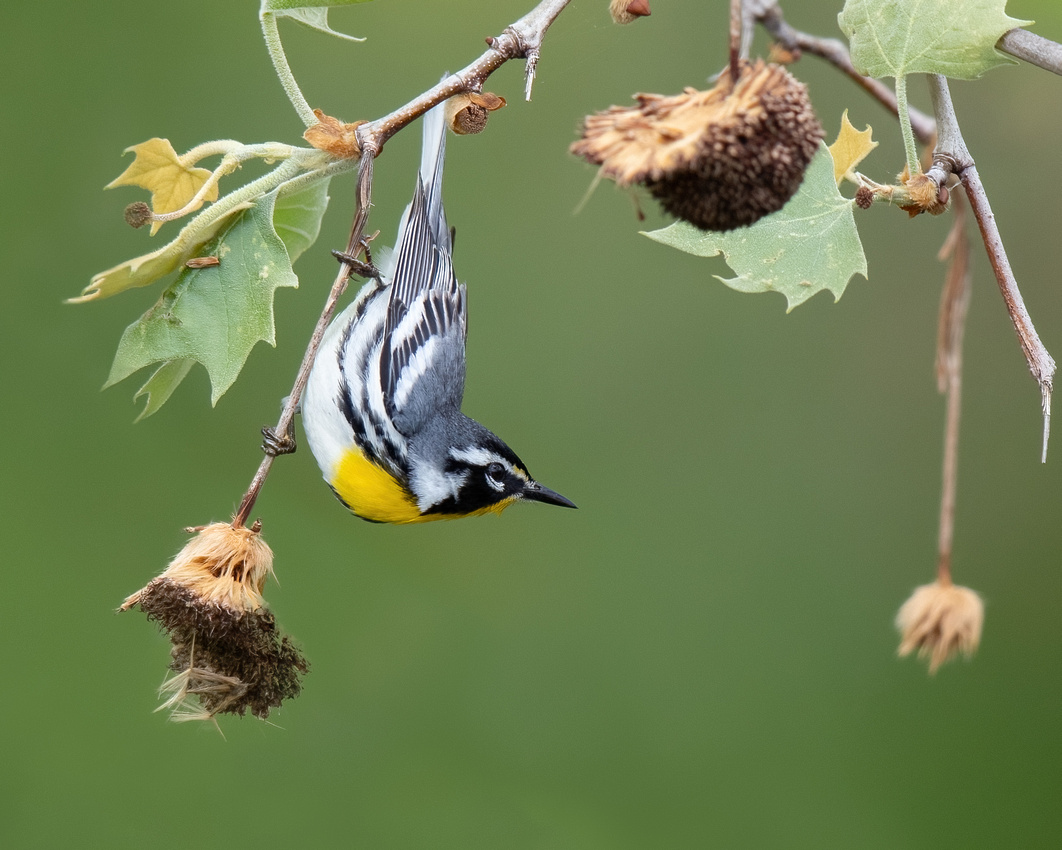 I saved these two birds for a special photo essay because they are two of my favorite early migrators.  Also, they are two of the more difficult to find and photograph at an eye level perspective.  Sometimes, I'll go an entire spring without seeing either of these birds in a position worth photographing.  Hopefully, next year I will see them again.