I hope you enjoyed part one of this two part series "Exploring Our Wetlands".  The following images were made in the later months of May and June.  In future photo essay's, I'm going to go backwards into late winter and early spring to share my waterfowl photos.

Fast forward into June and this young Mallard family has hatched and is growing quickly.  You can see on the one duck raising its wings that the flight feathers, or remiges, haven't fully developed yet.  At the time of this photo, they were still grounded and running around as one large group. 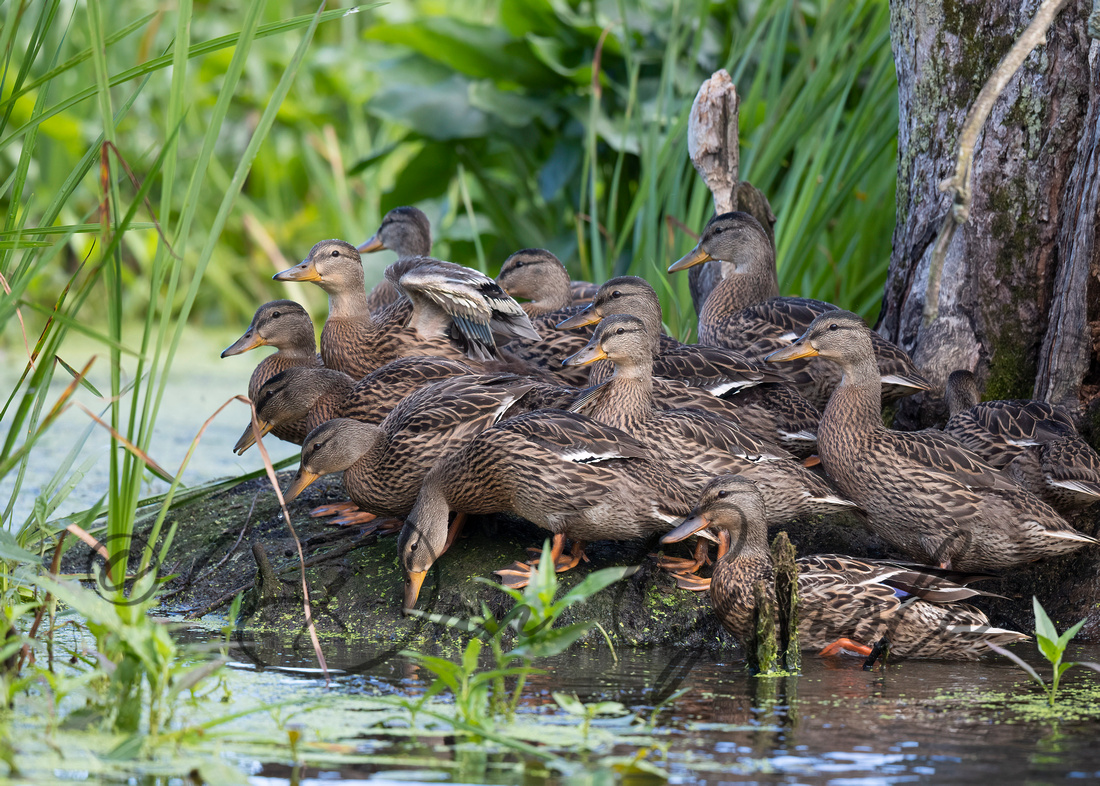 The Common Gallinule, is one of the many mispronounced bird names that I've heard. First, names such as Common Moorhen and Mudhen are obsolete.  The word Gallinule is actually pronounced "Ga-luh-nool".

Although they are good swimmers, they do not have webbed feet like a duck.  Peeking in and out of vegetation, the Common Gallinule has long toes that make it possible to walk on soft mud and floating vegetation. 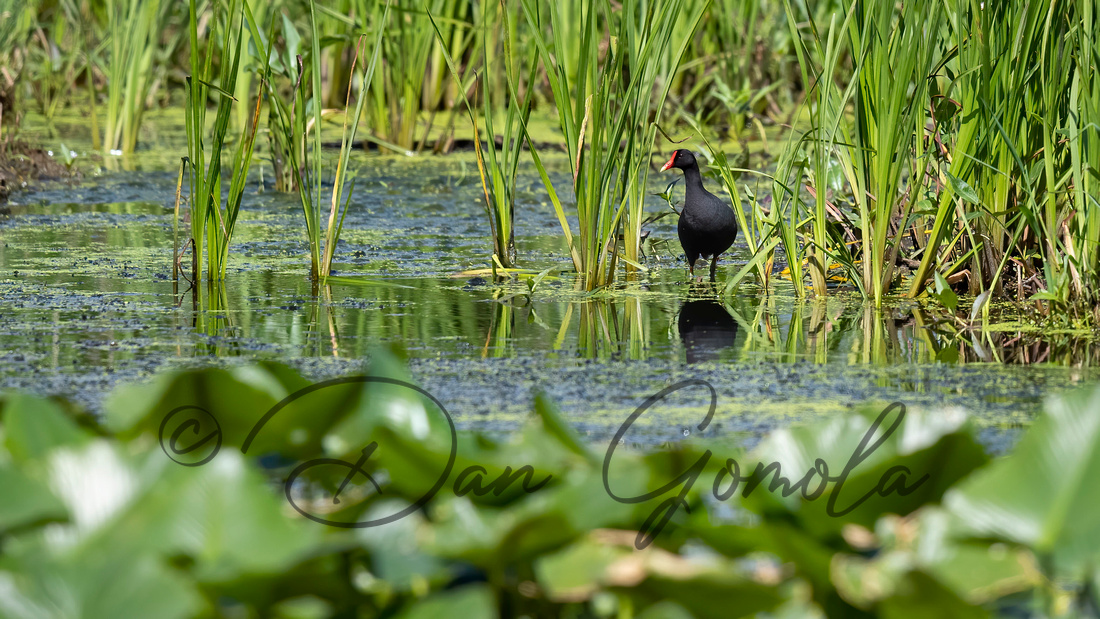 The Red-winged Blackbird is a harbinger of Spring.  Even though they are one of the first birds to come back in the spring, they are also the most familiar bird in the wetlands all summer.  This photo shows the display of the male's red shoulder patches when he is singing. 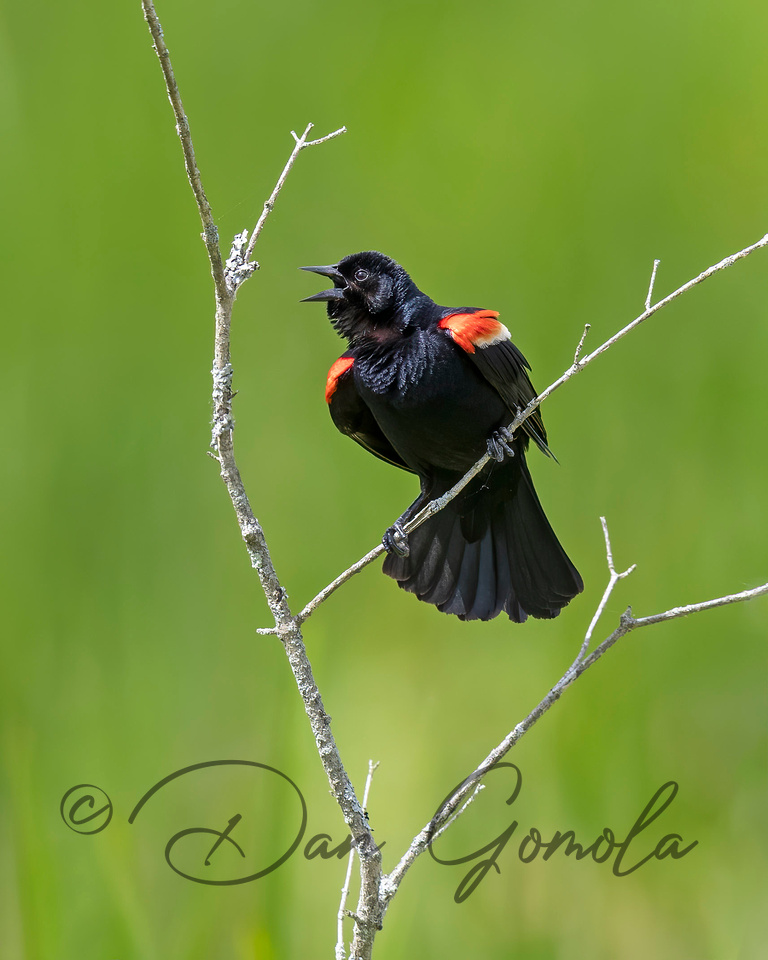 One morning I was lurking around the edges of a swamp when I noticed a nest nestled in a small shrub in the water.  I watched it through my lens for awhile and discovered a Common Grackle incubating eggs.  The nest is in an area populated with water snakes and I feared the eggs wouldn't survive.  I returned about four days later and the nest was abandoned so I believe something ate the eggs. 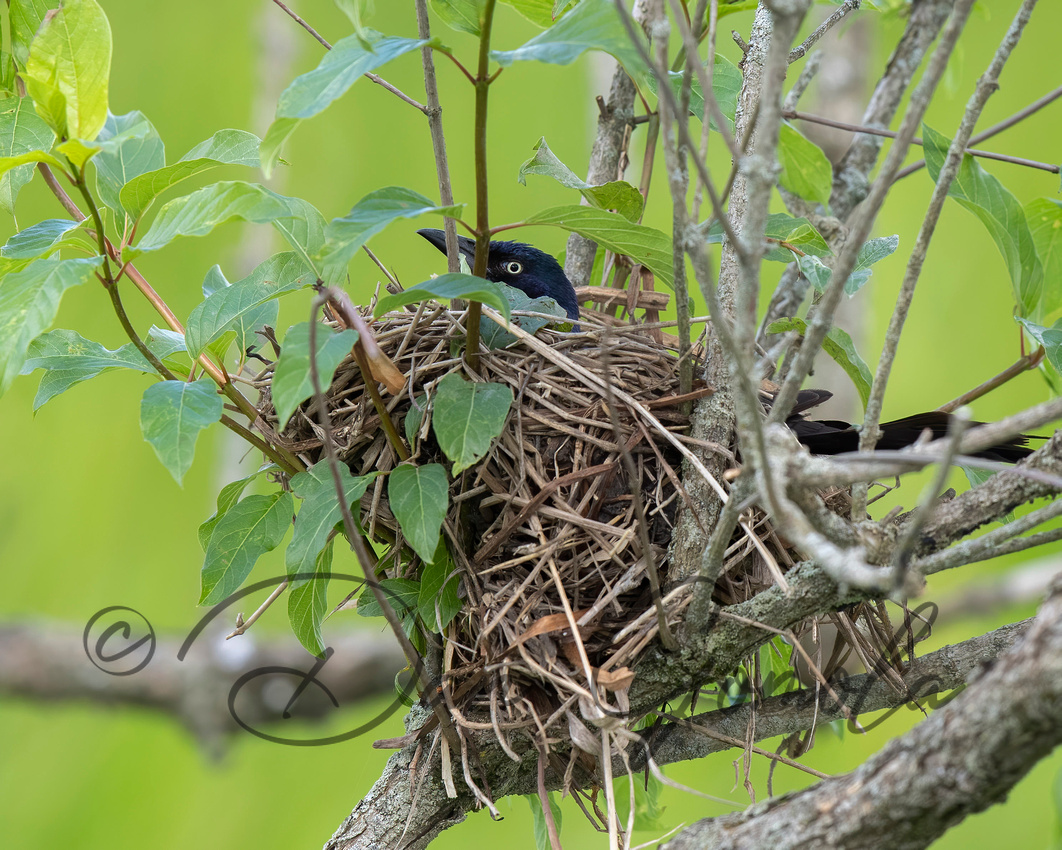 This is a probable culprit of raiding the Common Grackle nest shown above.  I'm not a fan of snakes.  No way!  No How!  However, I liked the way this Northern Water Snake looked slithering through the Spadderdock and last year's dried vegetation.  I especially liked that it was 15 yards away!

The Tree Swallow can be found in many habitats, including wetlands.  They are difficult to photograph in flight as they quickly zig-zag all over the place snatching insects in mid-air.  They got their name because of their habit of nesting in cavities in trees.  However, they do take over nest boxes too.  I love the long swooping wings of the resting Tree Swallow. 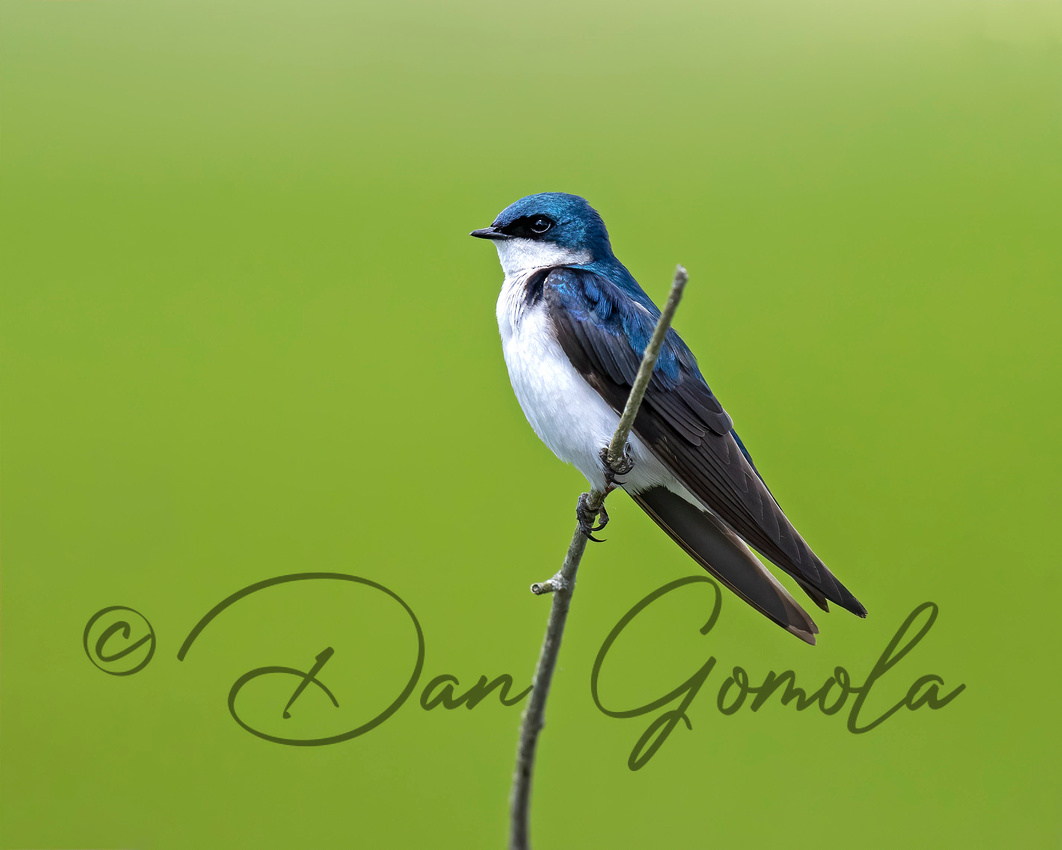 The Least Bittern is the smallest heron.  Rather difficult to see in their preferred habitat, they will give a patient person a glimpse once in a while. 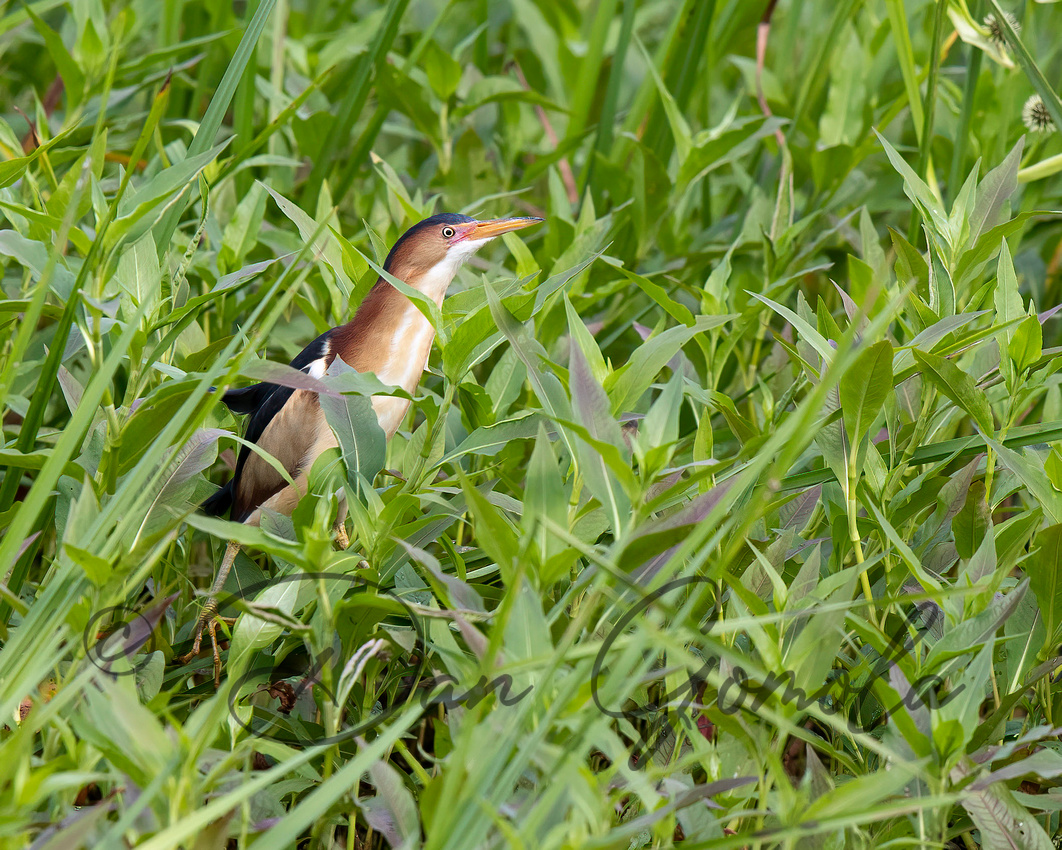 They are sneaky little buggers as they walk around the swamp inches above the water looking for food.  If you would like to see more photos and read more information about our smallest heron, check out a blog I wrote in August, 2017 called "A Morning at the Marsh". 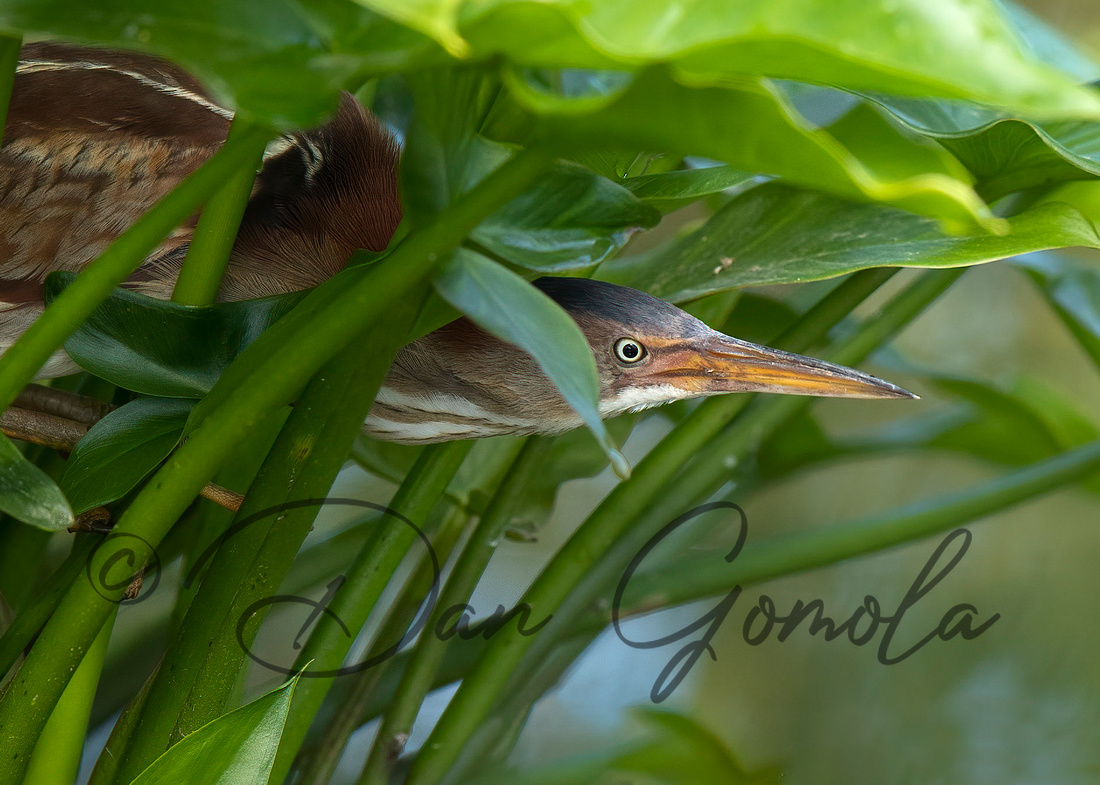 I see a lot of Painted Turtles sitting on rocks or logs in various bodies of water.  They tend to be leery of people and slide into the water if anyone comes too near.  Turtles bask in the sun and gain heat from the ground or log they are in contact with, through a process known as conduction.  Basking in the sun allows turtles to dry their shell, which prevents parasites from attaching. 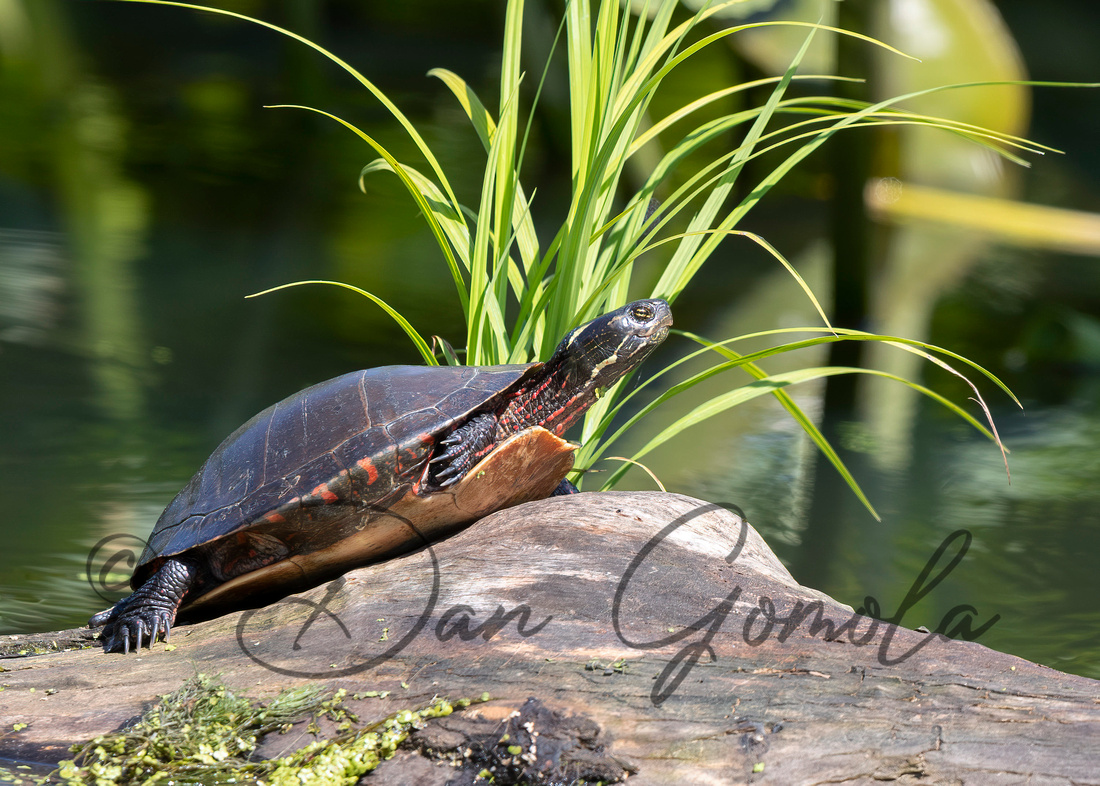 This drake Wood Duck was perched on the stump for a long time.  I ignored him at first because he was so far away.  Finally I gave in and made a few photos. 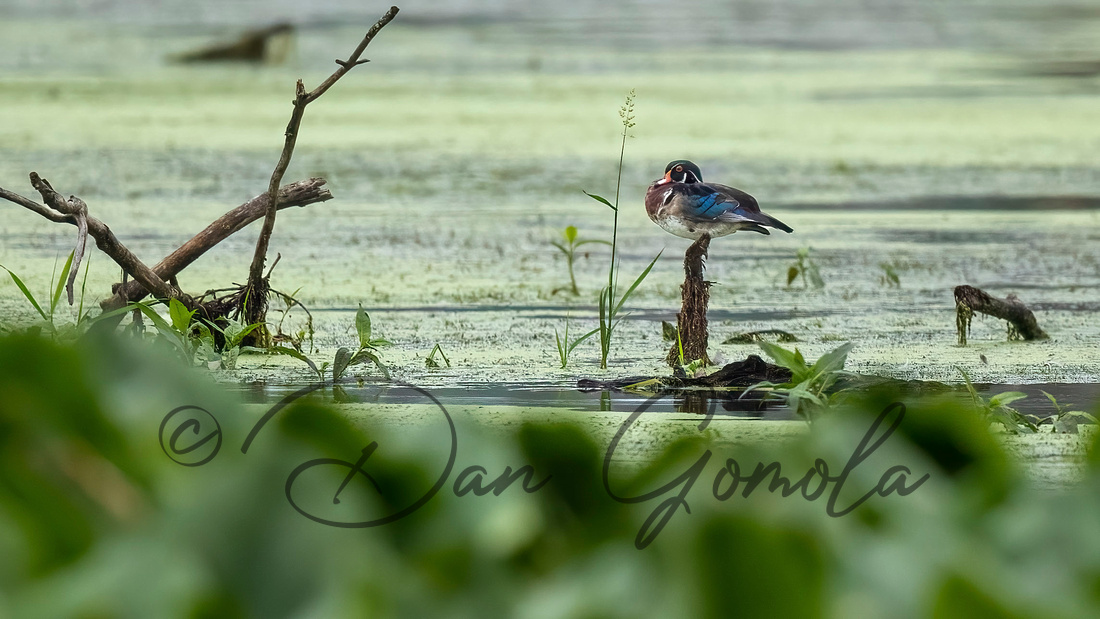 One morning, I was watching Bald Eagle fledglings at the swamp in MK Goddard State Park when this Great Blue Heron flew across the swamp and landed on a dead tree.  After awhile, it pulled one leg up into its chest indicating it was getting comfortable so I grabbed a few shots. 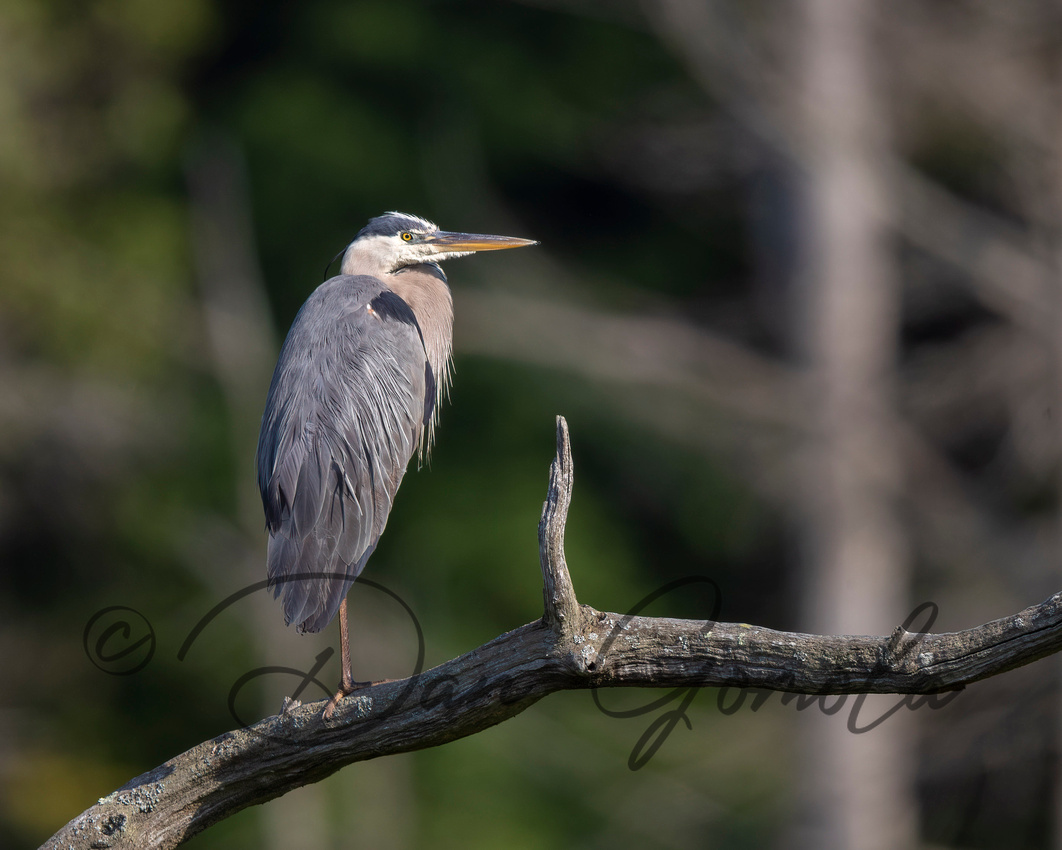 This Belted Kingfisher perched low over the wetlands most likely watching for a minnow or frog to wander past. 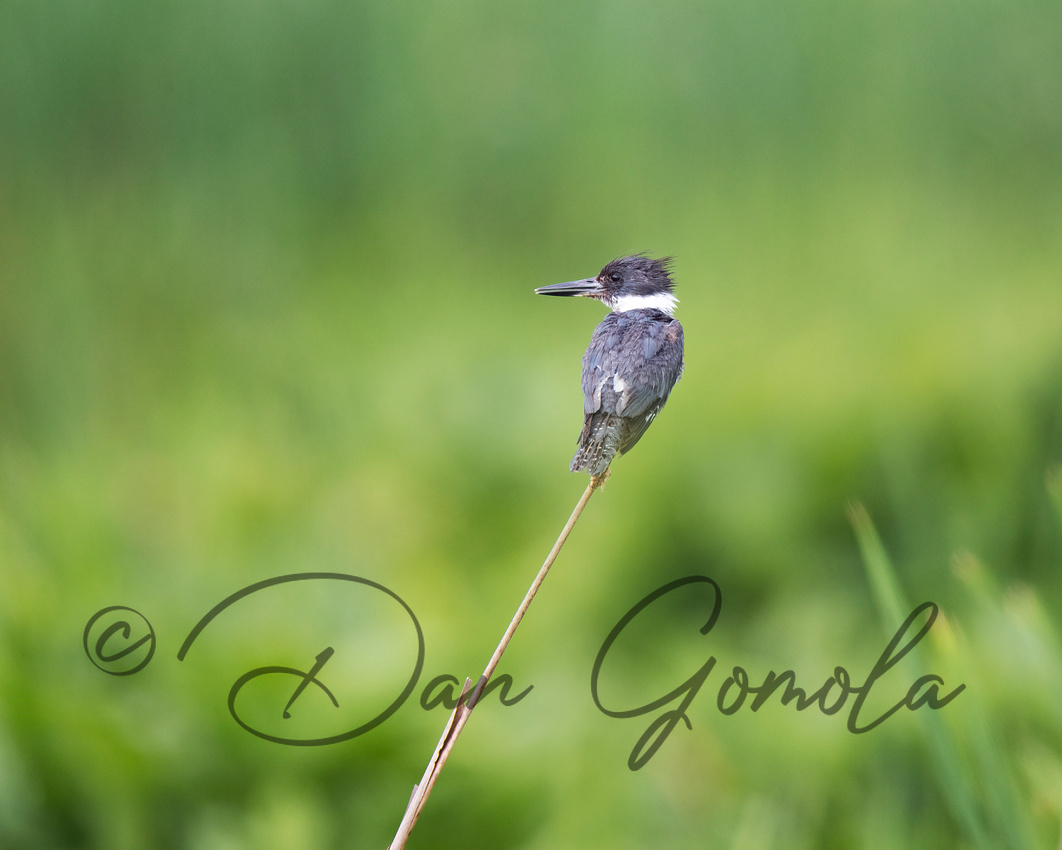 I hope you enjoyed this two part series of wildlife found in the still waters of swamps and marshes.  Of course, this wasn't a complete list of wildlife you may see but it is a nice sampling.  Maybe next spring I'll add something different to my portfolio.