Each April, when my focus turns towards photographing the returning songbirds, there is always a piece of me hoping to get an opportunity to photograph the den of a wild canine like the Red Fox.

Males are called "dog" foxes and females are called "vixens."  Besides the fact that they are intelligent predators with extremely sharp senses of sight, smell and hearing, the pups, also known as kits, are a lot of fun to watch once they are old enough to come out of the den to play.

Breeding usually begins in February and by April, the kits leave the den for short periods to explore.  Just like any other puppy, they play with anything they can pick up and run with. 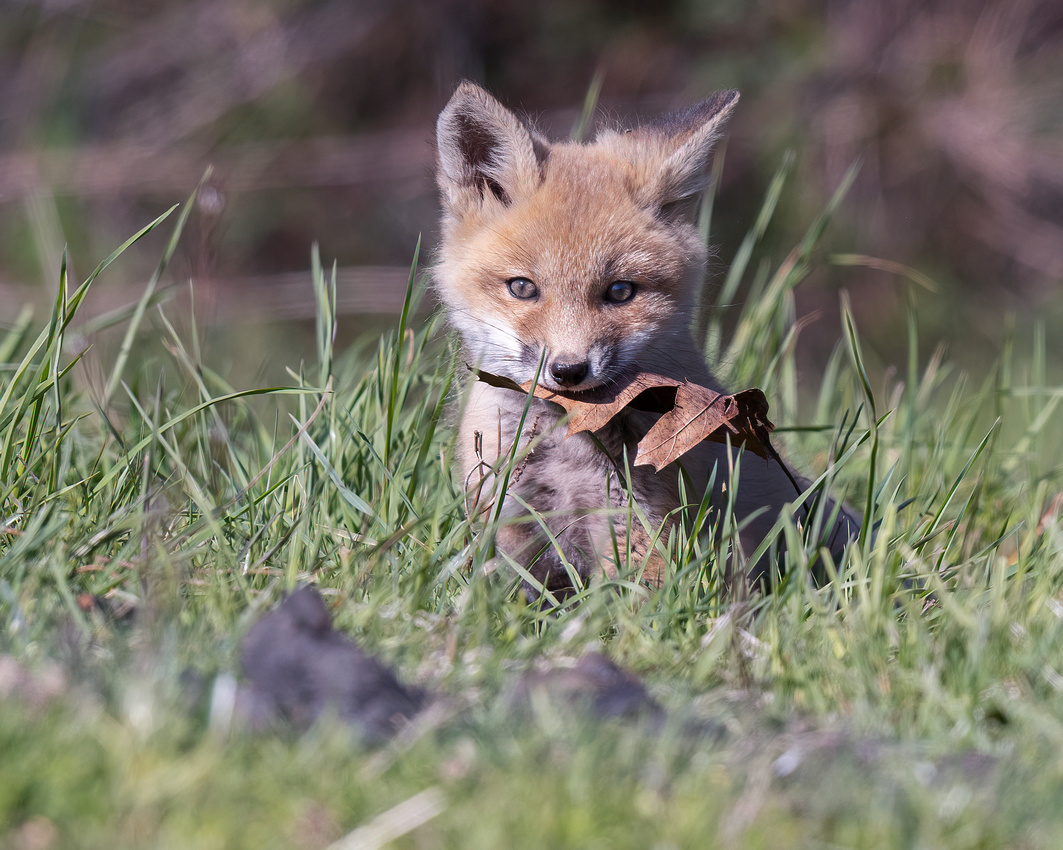 A litter of fox ranges from four to ten but the average is six.  Young are born in dens. The Red Fox usually enlarges a woodchuck burrow or might den in a hollow log.  Getting an opportunity to watch an active fox den is a toss-up each year because they may not use the same den the following year.  I was able to photograph two dens this year.  These first five photos are from the first den.  A photographer friend of mine invited me to a farm to watch.

The kits play just like domestic dogs.  In this photo, they are circling each other and waiting for one to pounce. 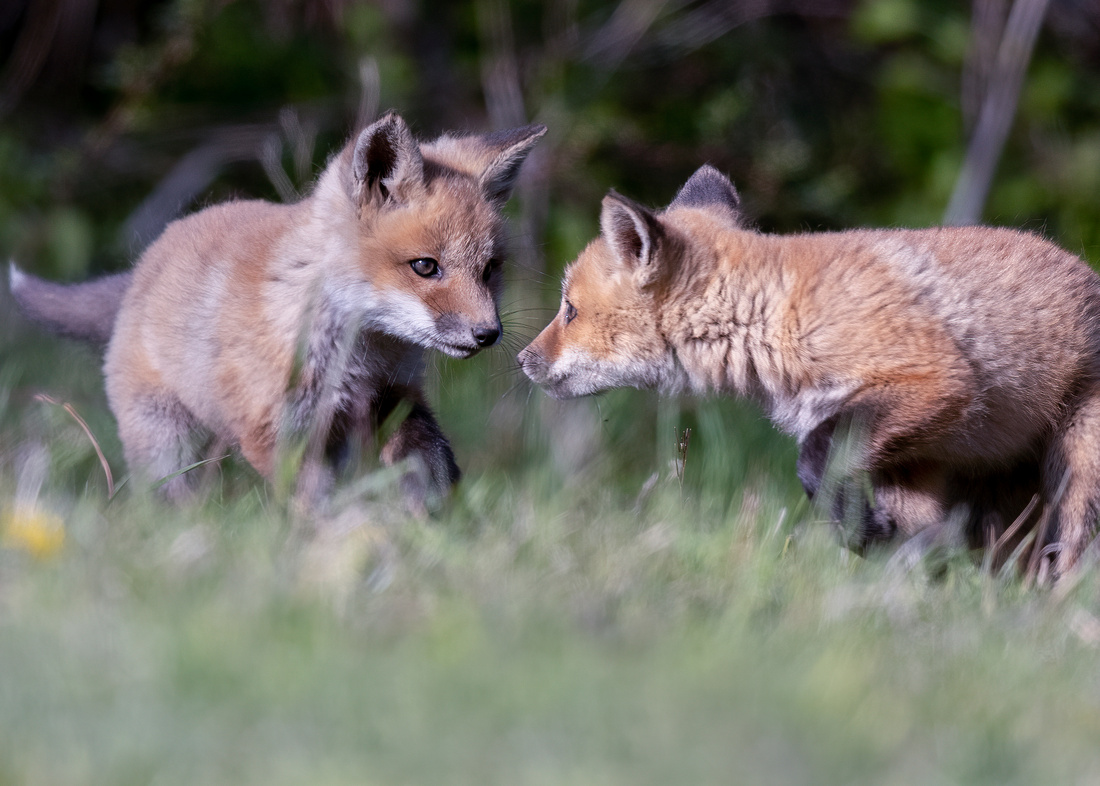 Setting up my gear under a blind is the desired way to photograph these animals.  Although Red Fox don't seem to mind making a den in a populated area, they can still be spooked and will move the litter if they feel threatened.  Sometimes, the kits will hear the clicks of the camera and stop to look but most of the time, they are unconcerned about my presence. 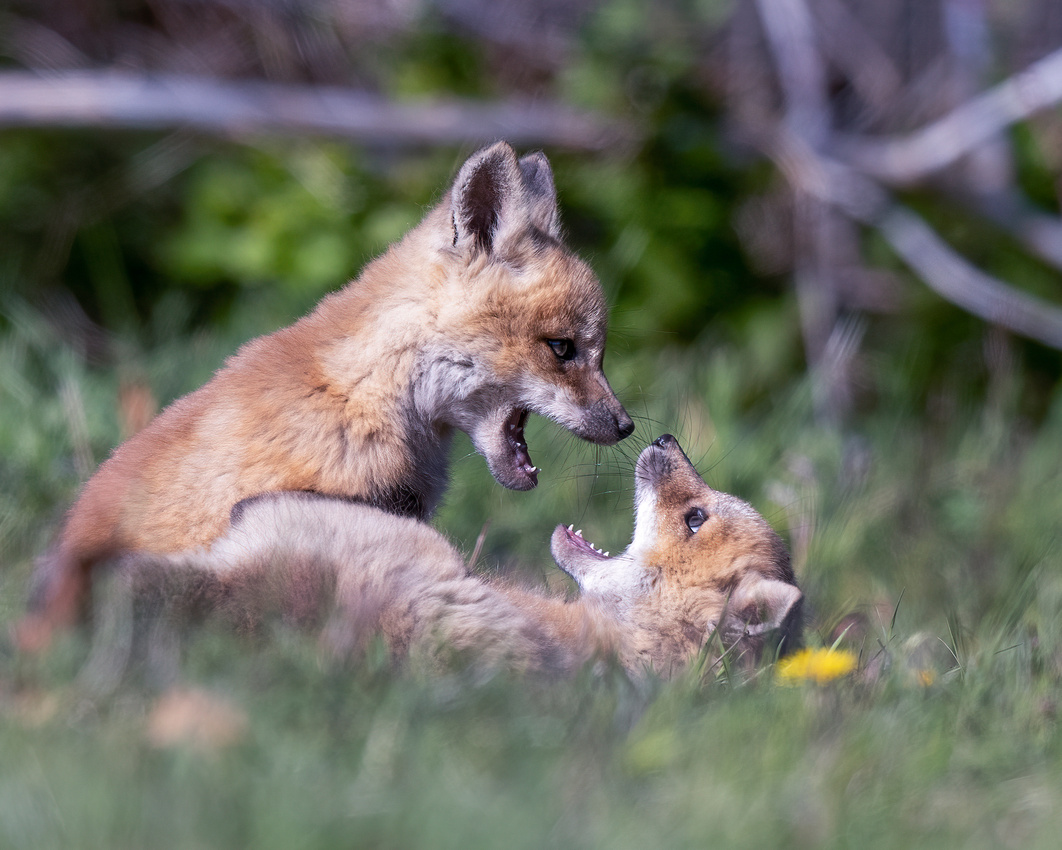 They were playing so hard one fox even bit it's own foot. 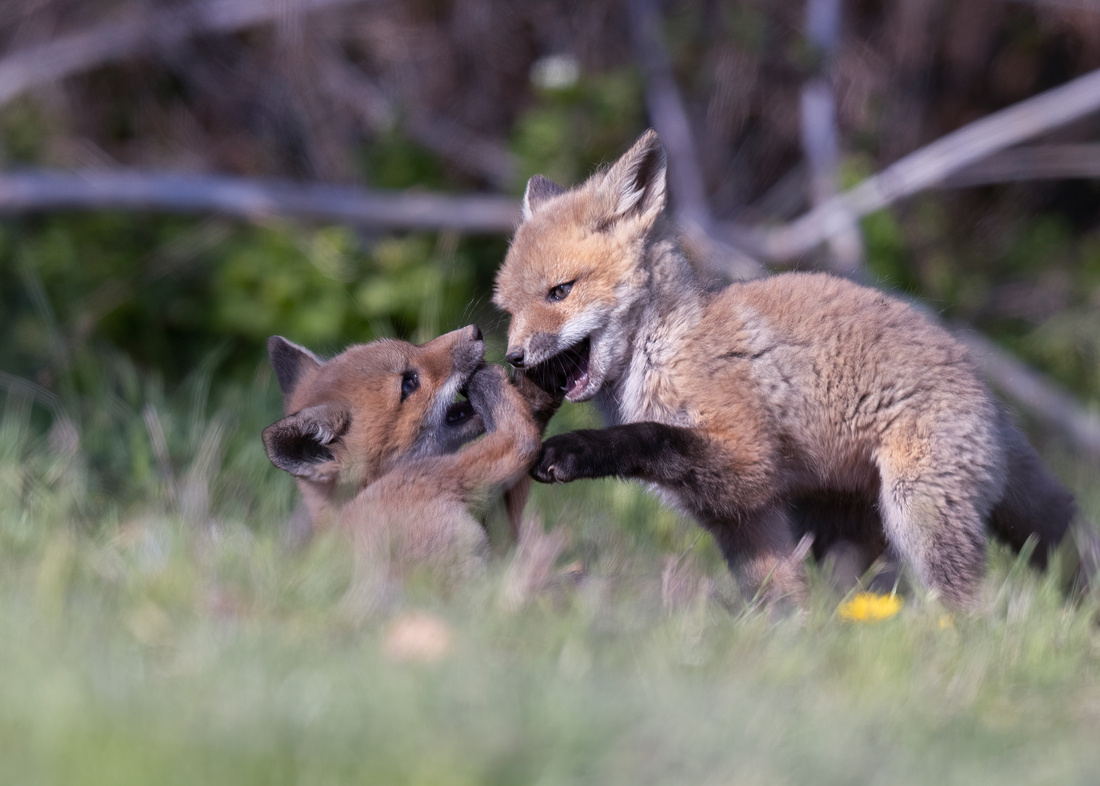 Their play times usually don't last very long.  They tire quickly and retreat into their den to rest.  During the day, neither parent is around the den.  They may come to nurse or bring food but leave.  I suppose their time spent at the den is short so they don't attract predators.

In the evening, it is common for the adults to come nearby to check on them.  The kits will stop frolicking and stare into the nearby woods.  They are probably hoping mom or dad is coming with food. 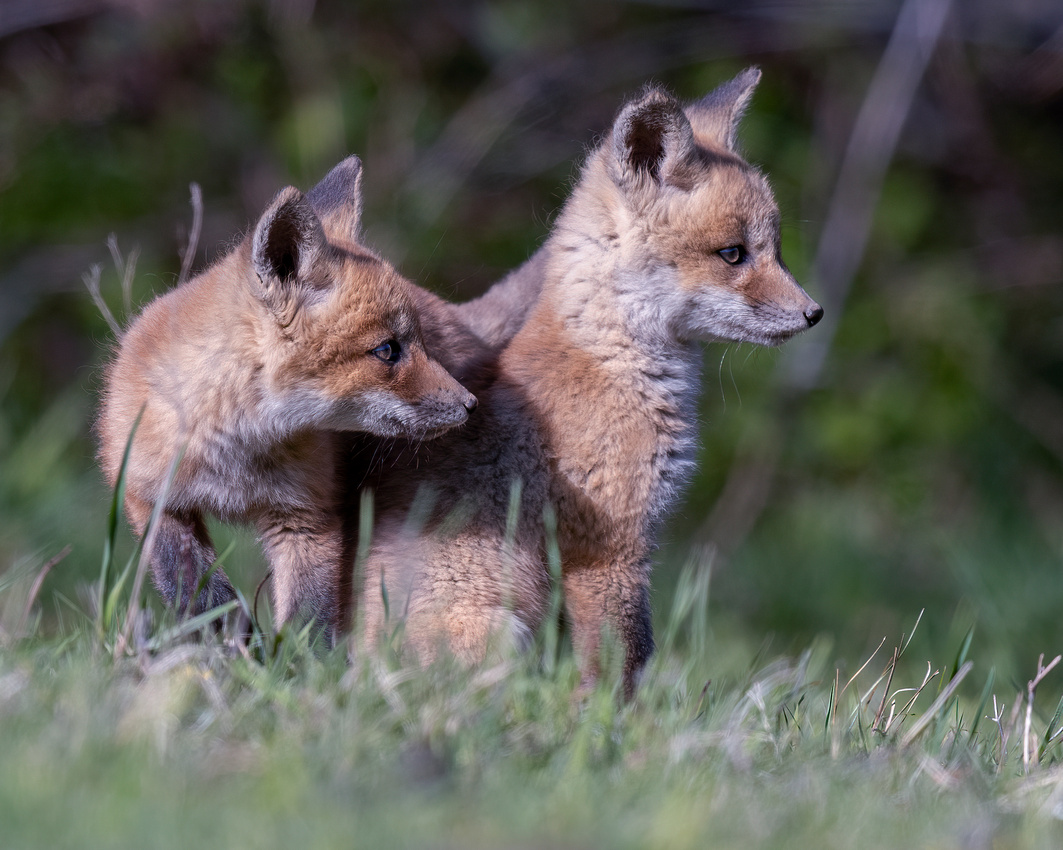 The next six photos were made at the second den of the year.  Elena and I were out and about one evening and I happened to see an orange flash at the edge of the woods.  I explored enough to see one of the little foxes.  I returned the favor to my friend and, a couple days later, we set up under the cover of wild, shrubby, growth in a field hoping the kits would leave the woods to play.  They did.  There were three kits in this litter.

These two played together a lot while the third liked to explore on its own.  This is the largest and smallest kit in the litter. 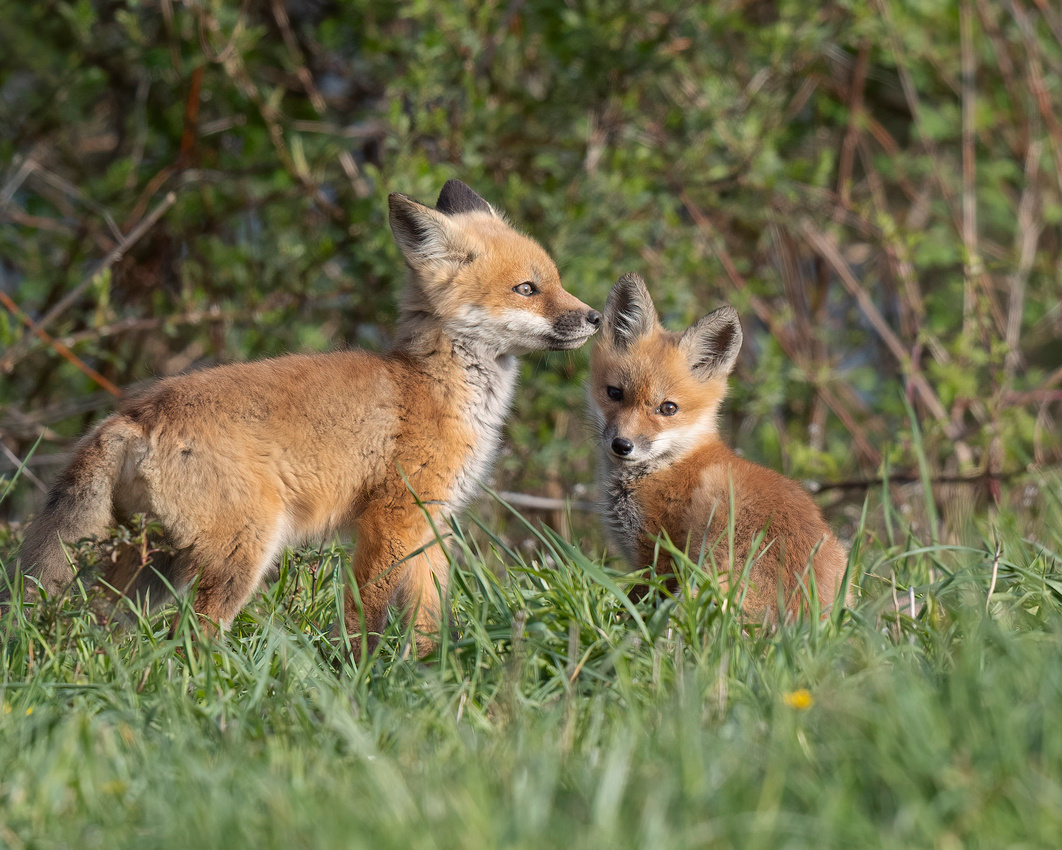 One of the cutest habits of the Red Fox is their tendency to pounce.  When they get older they will pounce on their prey.  Right now, they just pounce on each other. 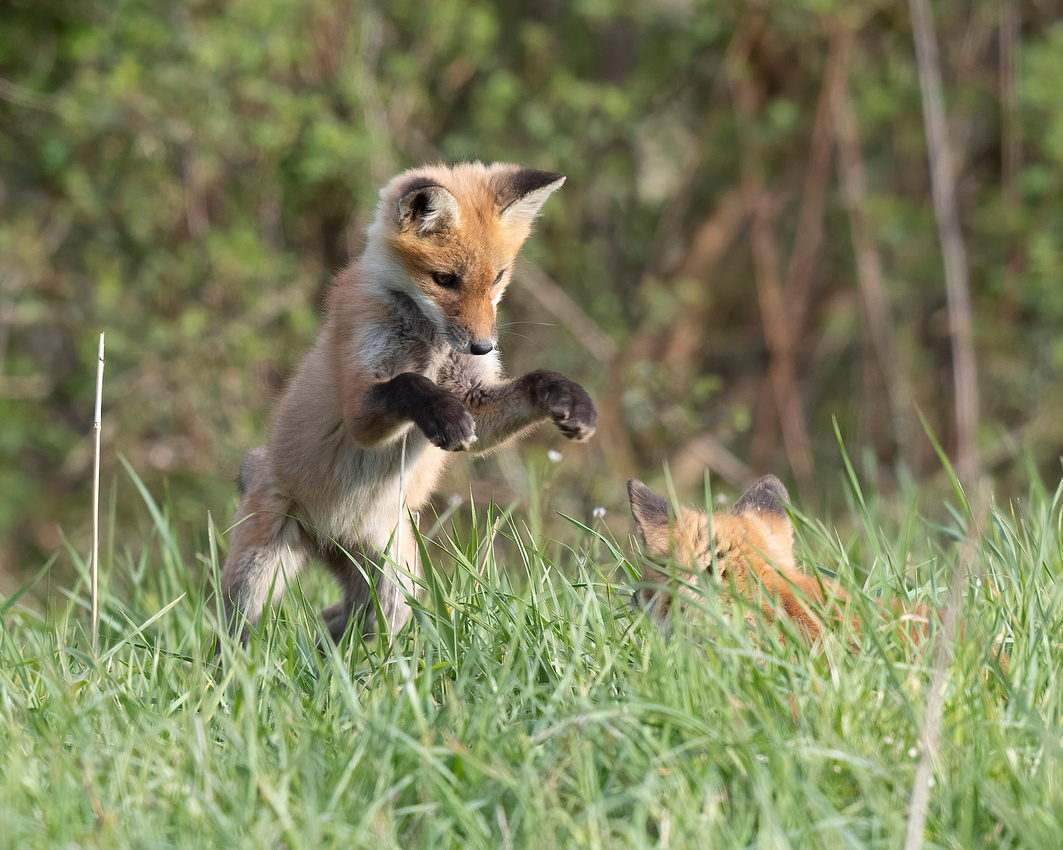 There is a lot of biting in the face area in their style of play. 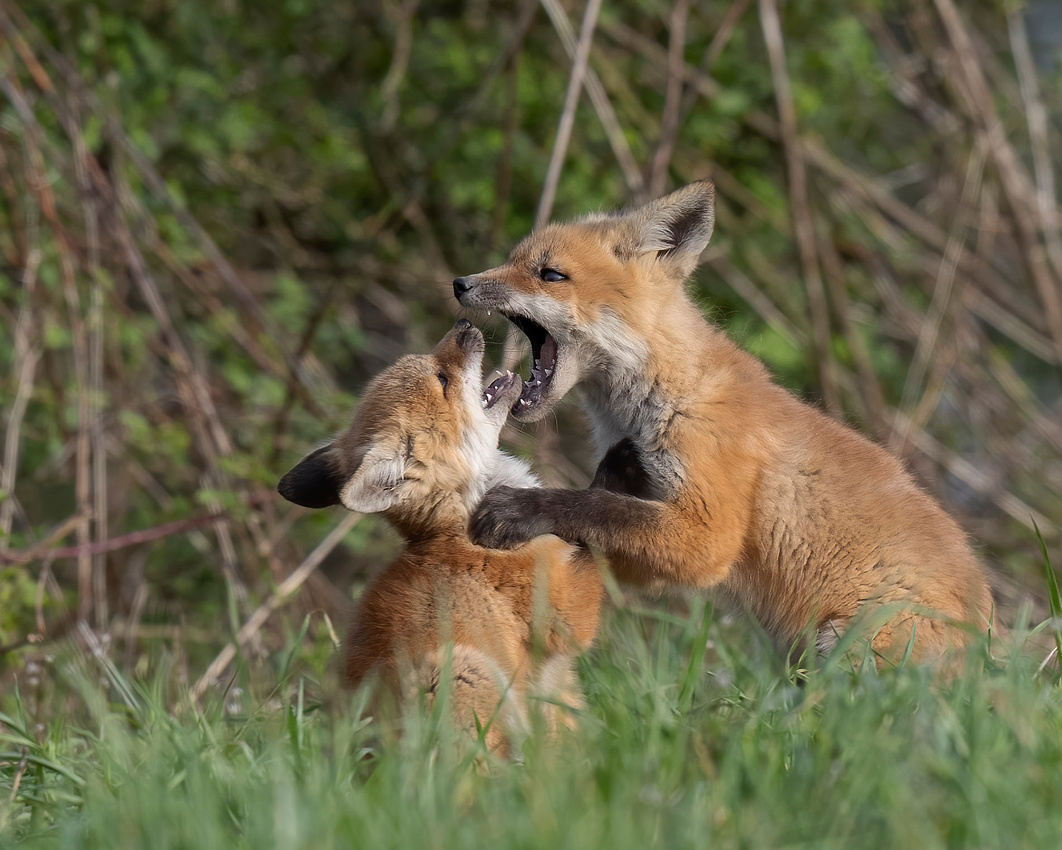 They need to be quick on their feet too as they tend to go after the feet as well.

Even during play, it doesn't take much to sway their attention to something else, leaving itself vulnerable to a bite on the jaw from a sibling. 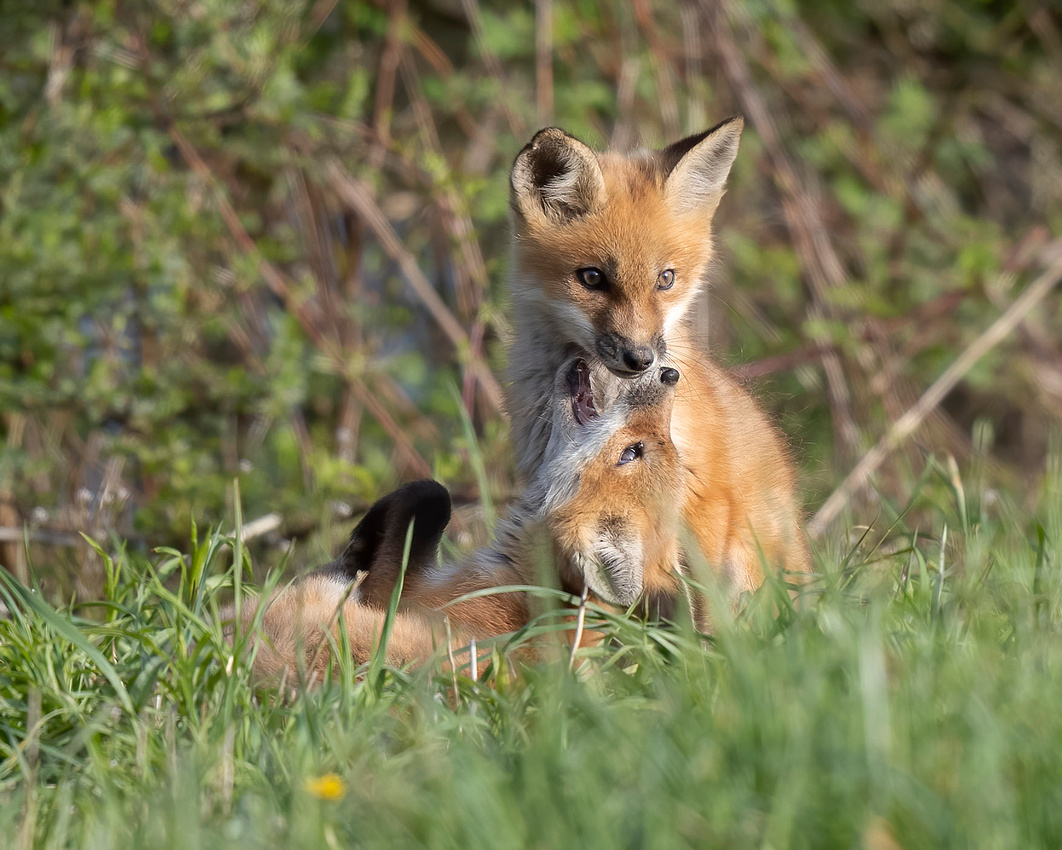 There was a large insect flying around, grabbing the attention of this little kit.  Their innocence and playful attitude will be short lived as they grow and become adults. 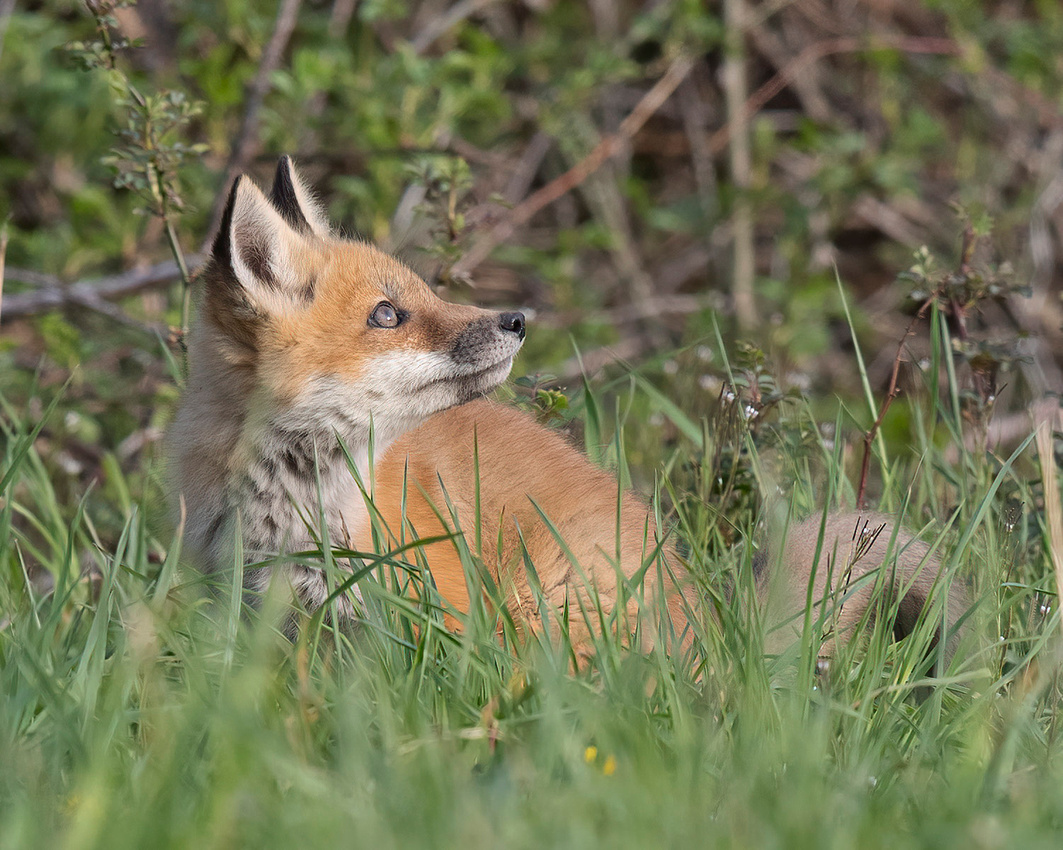 This is a vixen with one of her three kits from a third family I saw this year.  They will stick together through August or September when the family disbands.  Both males and females become sexually mature in ten months so the kits may breed the next winter. 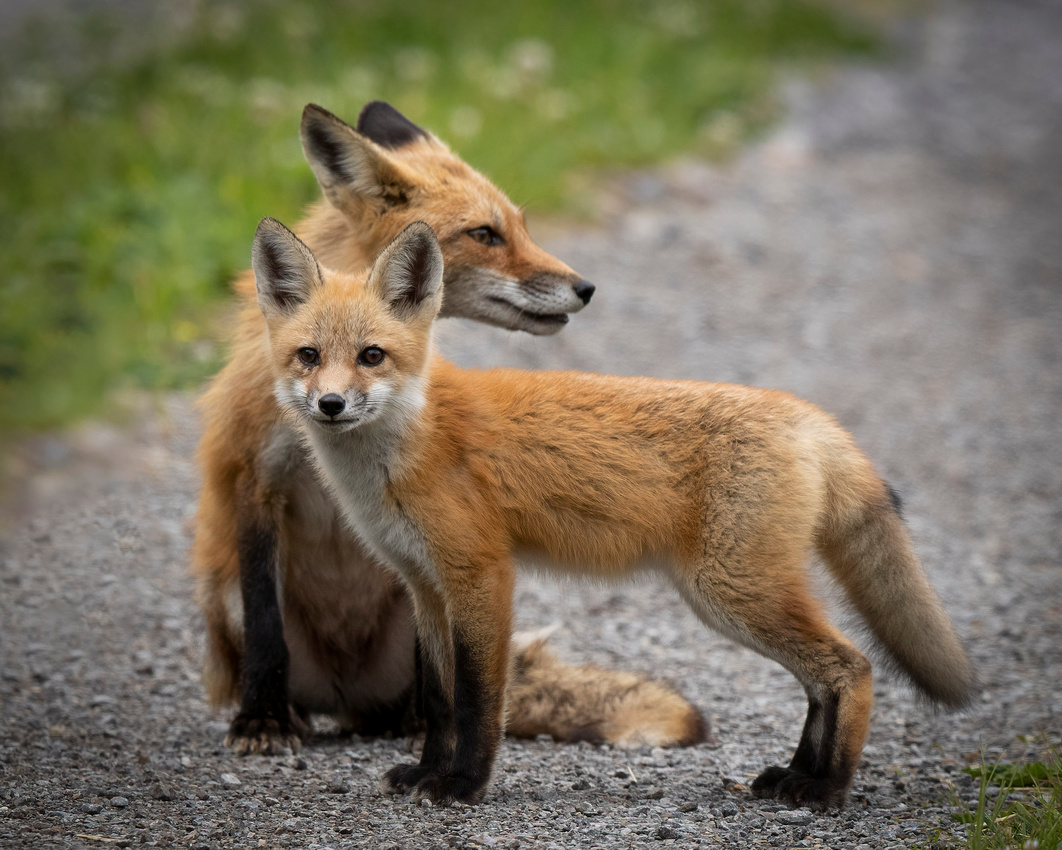 I hope you enjoyed this photo essay.  Photos can't fully express the cuteness of a young fox family.  If you are interested, please check out more photos of Red Fox in my Red Fox Gallery.