People from several countries travel to northern Michigan in the spring to see the Kirtland’s Warbler.  The bird is currently on the endangered list and on the life list of many birders and wildlife photographers.  Read on to hear more about this birds amazing fight for survival, its resurgence, and my experience of photographing the species for the first time.

At 5 o’clock in the morning my cell phone began playing its soft alarm music indicating it was time for Elena and I to see one of America’s rarest birds, the Kirtland’s Warbler.

I opened the drapes in the Grayling Michigan Days Inn to find a cloudless northern Michigan sky.  Normally, I would be thrilled for cloudless skies but today I was hoping for a cloud base to filter the sunshine on my quest to photograph the endangered Kirtland’s Warbler.

After a quick continental breakfast at the hotel, we found our way to Hartwick Pines State Park where, in conjunction with the Michigan Department of Natural Resources and the U.S. Fish and Wildlife Service, Michigan Audubon conducts Kirtland's Warbler guided tours each June to view the warbler in its breeding habitat.

From the Hartwick Pines Visitors Center, tour participants caravanned about a half hour to a Jack Pine plantation that the warblers selected to breed this year.  The path through the plantation is a two way path that looks like an unnamed country road. Other instructions included no use of bird calls or pishing.  Pishing is a small, repetitive noise used in the field to attract small birds.

Within minutes of entering the path, we heard a Kirtland’s Warbler singing.  I was carrying my Canon 1DX MK II full frame camera body, Canon 600mm MK II, and Canon 1.4 X Extender III on a RRS monopod.  Within 30 minutes, as a bird flit between trees and the ground alongside of the path,  I realized distance shots would be unnecessary and I didn't need the 1.4 X Extender. We spent the morning with tour guide, Craig Kasmer, the Park Interpreter at Hartwick Pines State Park.  Craig is the man on the left way in the back in the next photo.  He began the program at 7 AM with a brief lecture and video explaining pretty much everything I’m talking about in this blog.  About 7:30 we departed Hartwick Pines State Park and arrived at the Jack Pine plantation about 8:00.  People were free to leave whenever they wanted so after about an hour, some of the 17 tour members left. 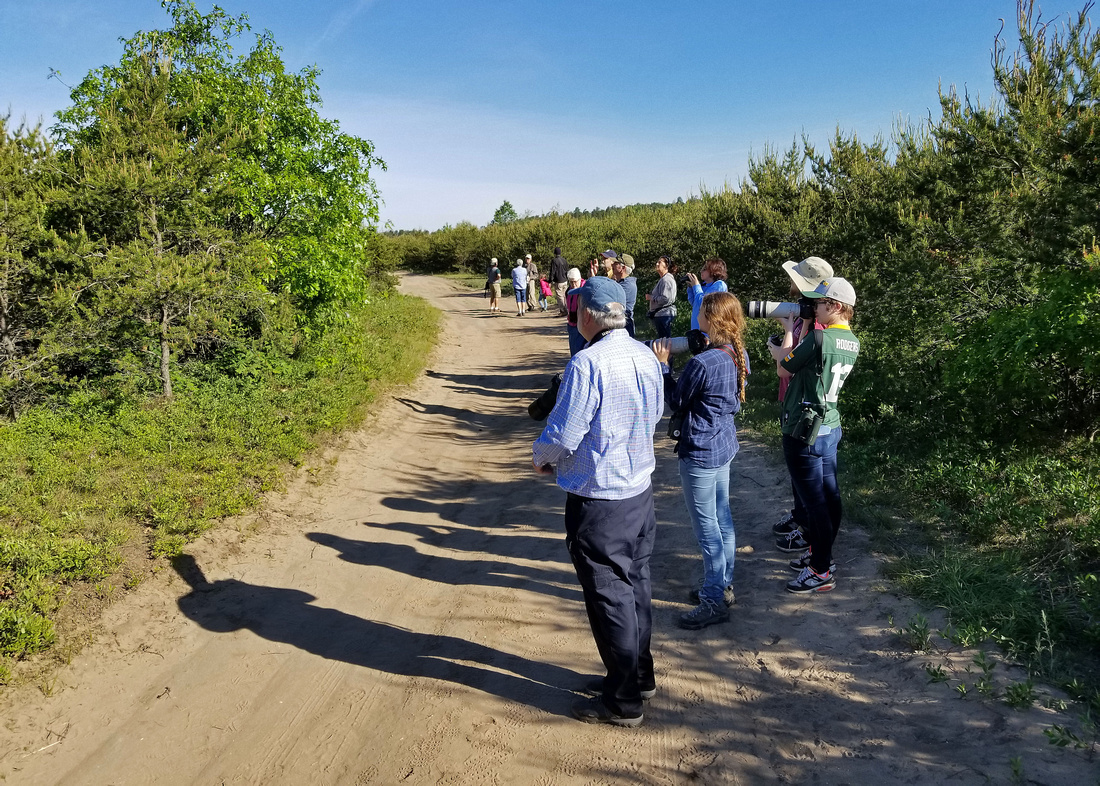 Kirtland’s Warbler sing for a couple reasons.  One is to find a mate and another is to protect their territory.  Interestingly, as we left a singing male, we had to walk about 100 yards before encountering another.  I don't know this to be fact but it seemed like their own comfortable breeding territory may have spanned about 100 yards. 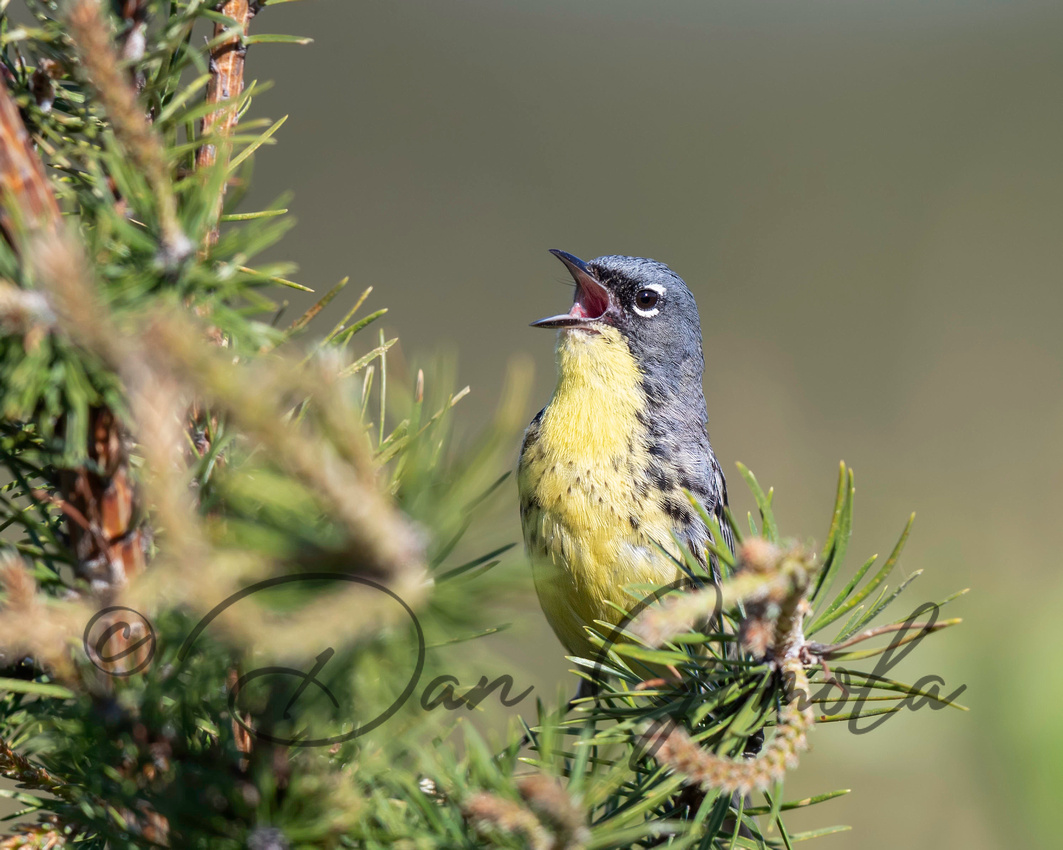 I was happy to hear nestlings have hatched so both parents would be out searching for food and males would be protecting their family.  We found this female going to her nest with food for the nestlings. Everyone kept their distance and watched the birds search for food and once in a while they would stop to preen.

Each spring, the .5 ounce Kirtland's Warbler migrates from the Bahamas to their northern breeding ground.  You can only find nesting pairs in a few counties in the Michigan’s northern Lower Peninsula and, in recent years, they have also been recorded in Michigan’s Upper Peninsula, Wisconsin, and Ontario.  In June the nestlings hatch and the rest of the summer is spent raising the fledglings and eating to prepare for their winter migration.  Around the beginning of September, the Kirtland’s Warbler flies back to the Bahamas until instincts tell them to come back north to do it all over again. In 1987, the Kirtland’s Warbler's world population was as low as 350 birds.  Through the work of scientists and land managers, that population has increased to over 4000 birds.

There are two main reasons for their initial decline.  First, the Kirtland’s Warbler is very picky about their breeding habitat and only breed in young, thick, Jack Pine forests averaging a height of 5 – 15 feet.  Second, they require forests covering 30-40 acres to raise their young.  A mature Jack Pine can reach 55-65 feet in height, so the Kirtland’s Warbler looks for young forests.

Here is a look at the Jack Pine plantation we were in. It's difficult to tell but there were acres upon acres of Jack Pine that I estimate were no taller than 10 feet. So, how does Mother Nature maintain Jack Pine forests suitable for a Kirtland’s Warbler?  The cones on mature trees are serotinous.  That means they only open based on a trigger of some sort.  For Jack Pine, the trigger is when they are exposed to intense heat, greater than or equal to 122 degrees F.  Before modern firefighting technology, fires would destroy Jack Pine forests every 30 – 50 years.  As a fire sweeps through leaving charred ground and tree skeletons, the waxy Jack Pine cones open and distribute the seeds in a tight circle around the charred tree.  New trees then grow providing a new densely populated Jack Pine forest.  The warbler first appears in an area about six years after a fire.  After about 15 years, when the trees become too tall, the warbler leaves the area.

Nowadays, fires that occur are usually under control before doing a lot of destruction.  Plus, people are cutting into these forests to build homes and businesses.  The irregular shape of the Jack Pine does not make a pretty landscape tree so with little regard to the essential Kirtland’s Warbler's habitat, the trees are removed.

Through the work of the US Forest Service and Michigan Department of Natural Resources, Kirtland’s Warbler habitat is being created by harvesting old and tall Jack Pine forests and planting new ones to replicate how it would naturally occur. Here is a male perched near the top of a Jack Pine. 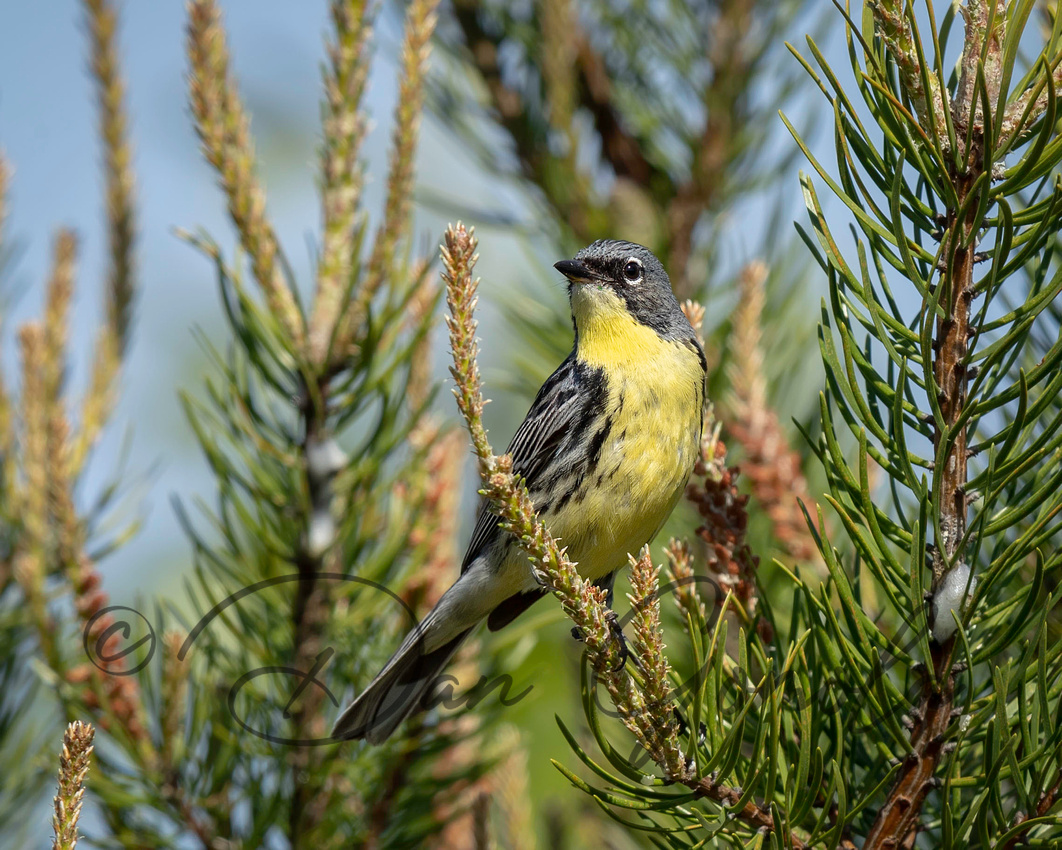 I mentioned in the beginning of this blog that I was wishing for a soft cloud cover to filter the sun but didn't get that.  Harsh sun, even in the early hours, present many issues with exposure on light feathers such as yellow and white.  Hopefully, I'll see slightly overcast skies on my return trip next June.  In the meantime, I'll accept bright sun and be happy that I got to photograph this rare bird.

Here is a male Kirtland's Warbler defending his territory and young family while carrying a worm in his mouth. Minutes later, after moving closer to the nest, he is still carrying the same worm he had in the previous photo. 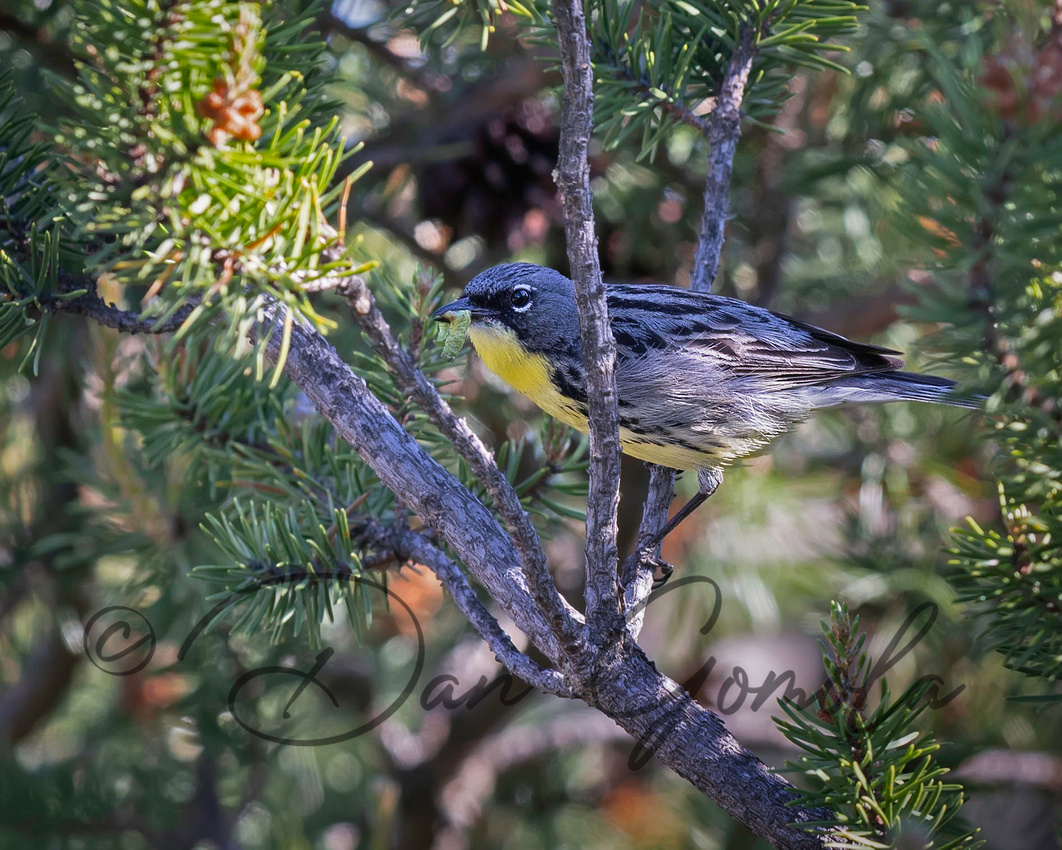 They are a bird that like dense branches.  In the midst of flitting around, they sometimes stop briefly on a good perch for a photograph. We watched this warbler crawl all over several trees looking for insects before finally climbing up this branch out of the center of the tree. Finally, he stopped for a second.

Food is what's important so he continued to search. In my observation, they have a habit of swiveling their body 90 degrees like an oscillating sprinkler while singing their song.  It's as if they are broadcasting their song over their territory. 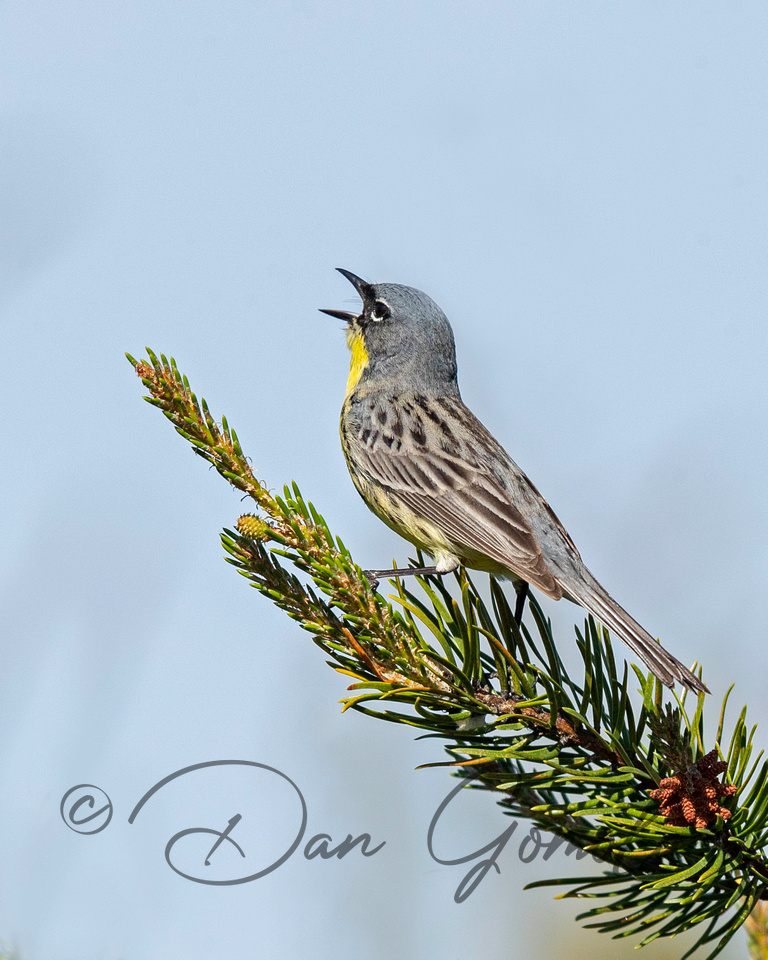 About 11:00 the sun was getting high, it was getting hot, and the birds were singing a little less.  Craig, Elena and I were the last people remaining from the group and we called it a day.

With the Kirtland’s Warbler numbers reaching 4,000 today, the U.S. Fish and Wildlife Service requested to delist the warbler from the federal list of threatened and endangered species.  A final decision is expected by the end of 2018.

The information in this photo blog was created using my personal observations, lecture, video, and questions during the tour, the Cornell Lab of Ornithology website, and a Kirtland's Warbler Festival publication available at the Hartwick Pines Visitor's Center.

I highly recommend the Kirtland’s Warbler tours.  For somebody coming into the area from far away it was nice to have someone take you directly to a nesting site.   Having access to Craig Kasmer for three plus hours, was invaluable.  Keep in mind there will be good days and bad days in regards to bird sightings.  It seems like you will always hear them but they need to be near the path to see them.  I hope it’s a good day when you go.