Indigo Bunting: A Scrap of Sky With Wings

Sometimes called “Blue Canaries”, the Indigo Bunting sings on the highest perch all spring and summer.  When I want to photograph Indigo Buntings, I visit any weedy fields or shrubby areas near woods and listen.  Eventually, one will come along. 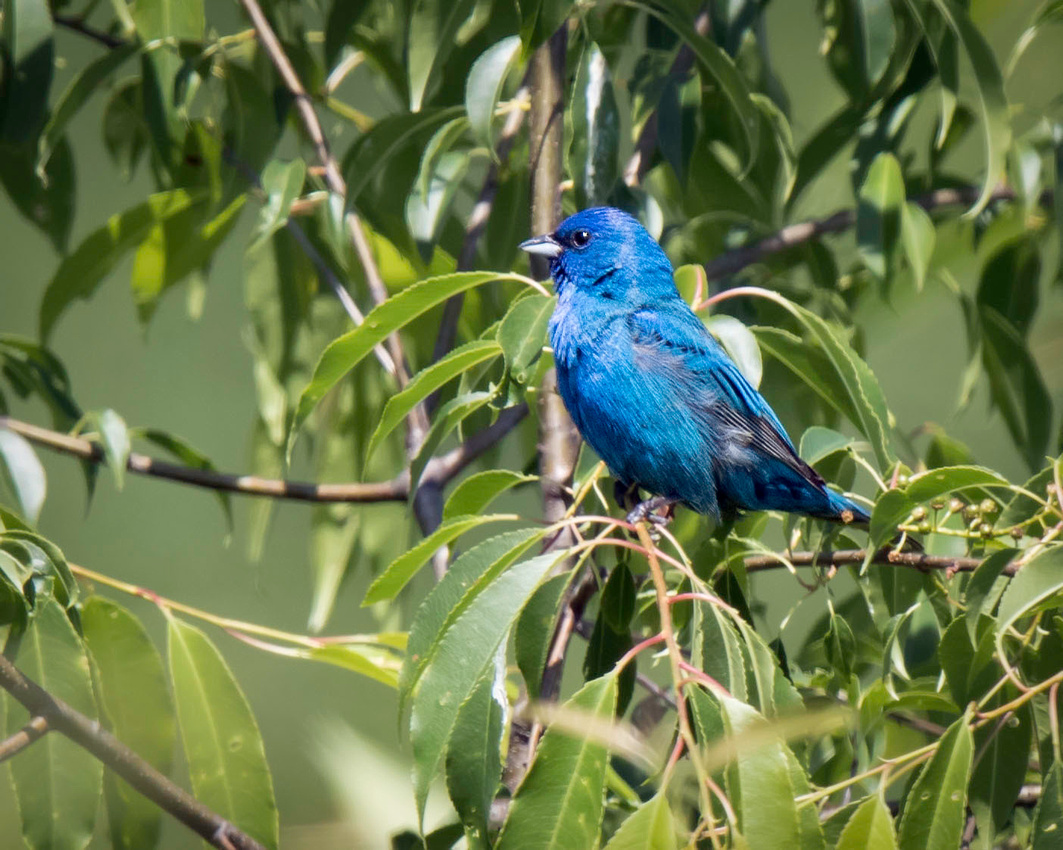 A male Indigo Bunting will sing as many as 200 songs per hour at dawn and about one per minute for the rest of the day.  Many times birders refer to a bird’s song in the English language.  If you were to do that for an Indigo Bunting, it would be "what! what! where? where? see it! see it!" repeated in pairs. 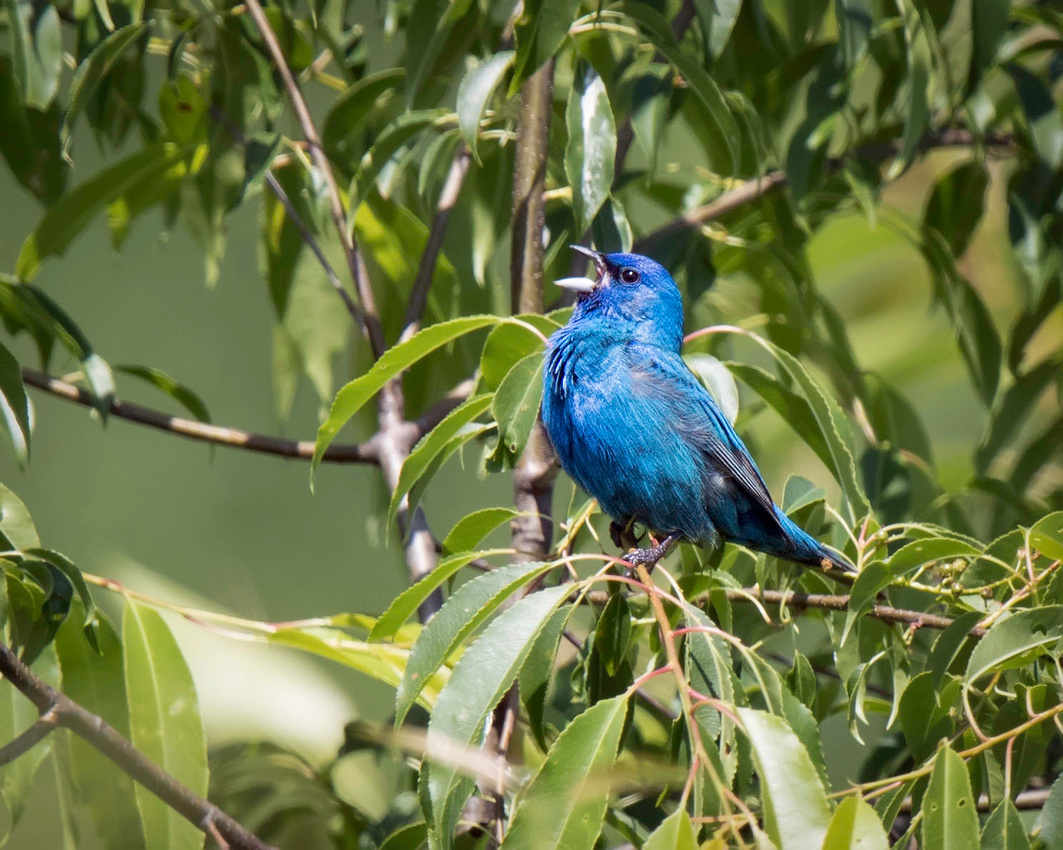 While watching the male and waiting for him to return, I saw a flash of brown in the weeds.  It was holding its wings out slightly while vibrating its wings and making a buzzing sound. To me, it looked like a young male waiting to be fed.  As I photographed him, the adult flew into the shot. 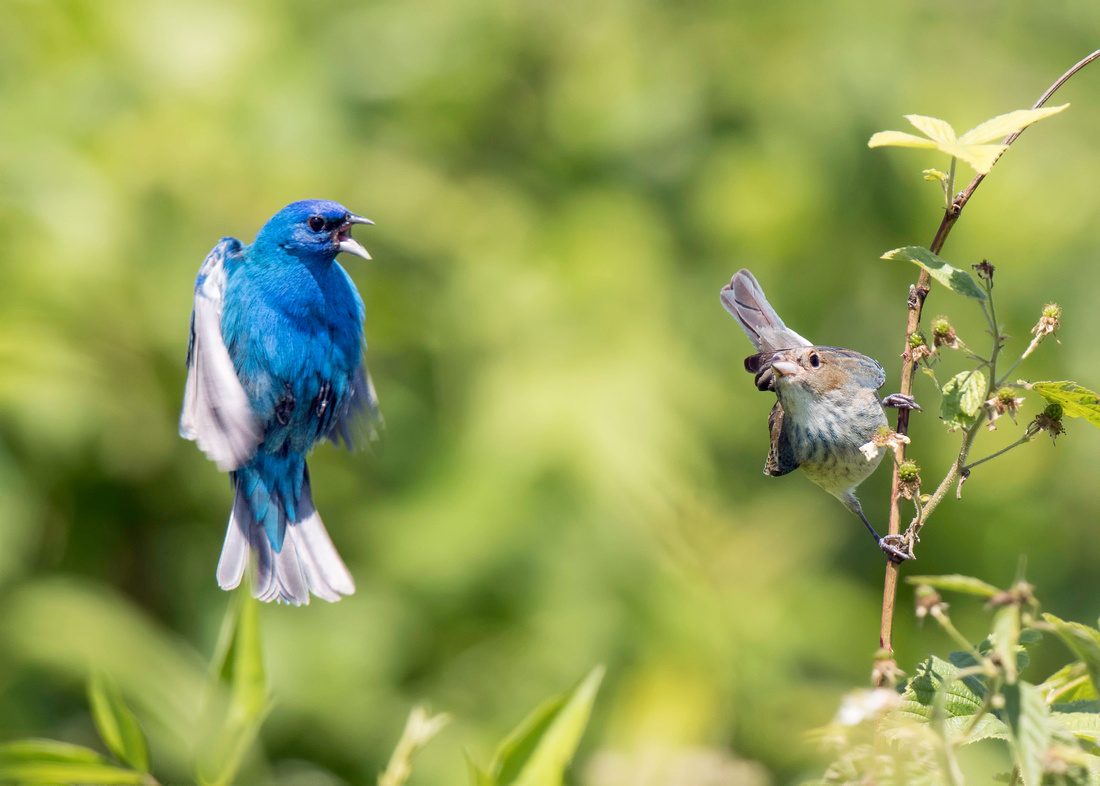 I would have expected the adult to have a morsel of food but I guess he just came in to the calls of the youngster. 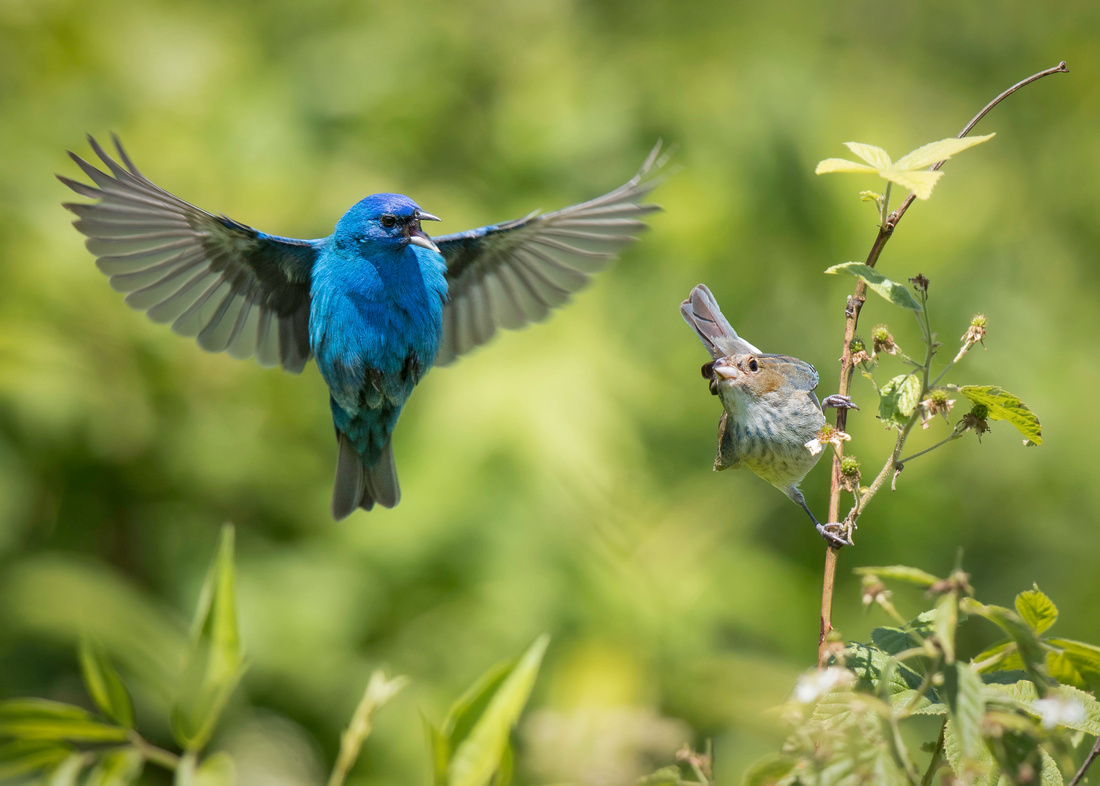 The plain brown females are seen much less often.  They need to be inconspicuous because they do most of the work caring for the eggs and young which are hidden in dense thickets.  This one came in and out of the thicket a few times. 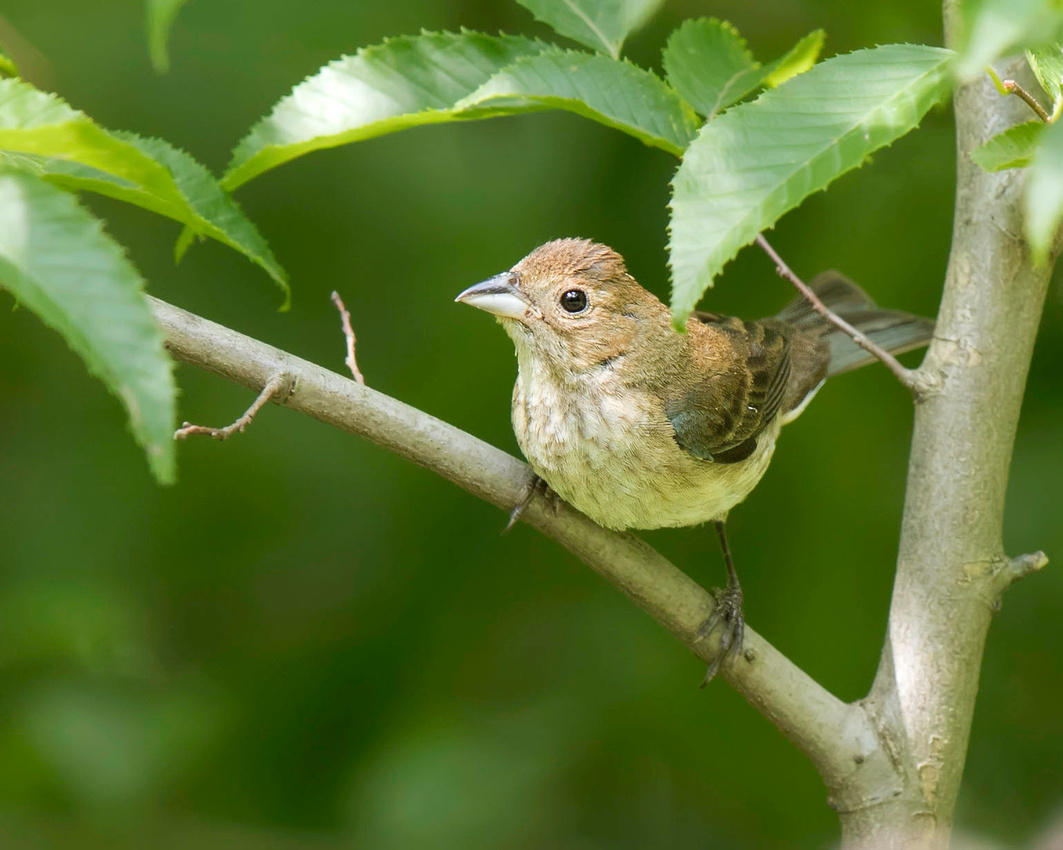 In the shadows, the male Indigo Bunting looks much darker.  Why?  This bird’s feathers does not contain any blue pigment.  The structure of the feathers diffracts light so that we see only the color blue.  So, the amount of light changes our perception of the color of an Indigo Bunting. 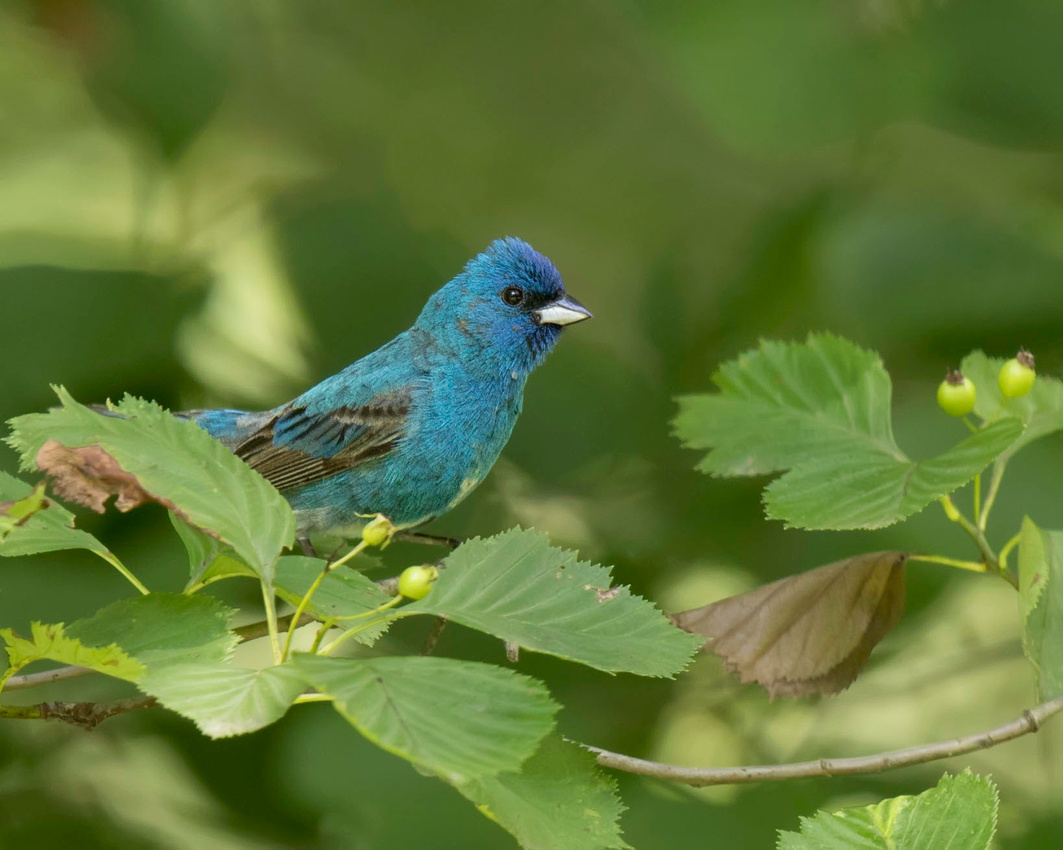 Indigo Buntings eat small seeds, berries, buds, and insects.  The female reappeared and this time had an insect in her beak.  Interestingly, she didn’t eat it or offer it to the male.  Instead, she flit from perch to perch with the insect in her mouth. 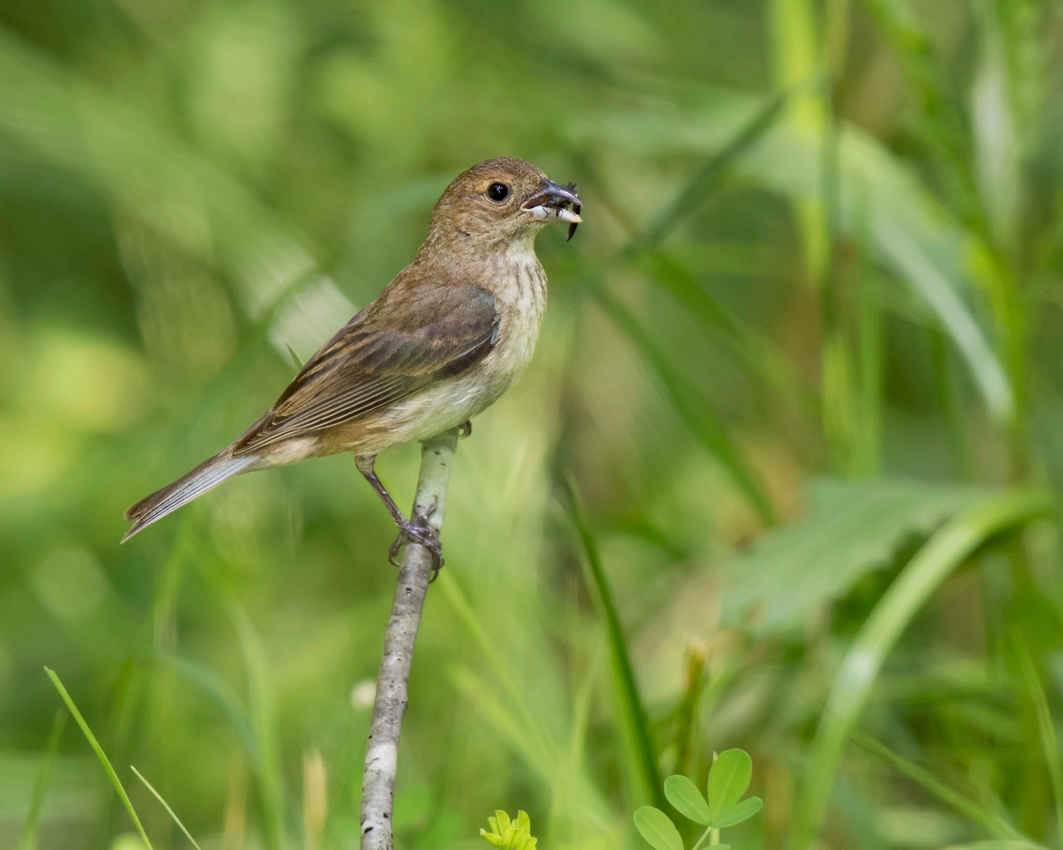 The male looked very interested in something.  Usually, they fly around in a large circle but today he was staying in a tight loop. 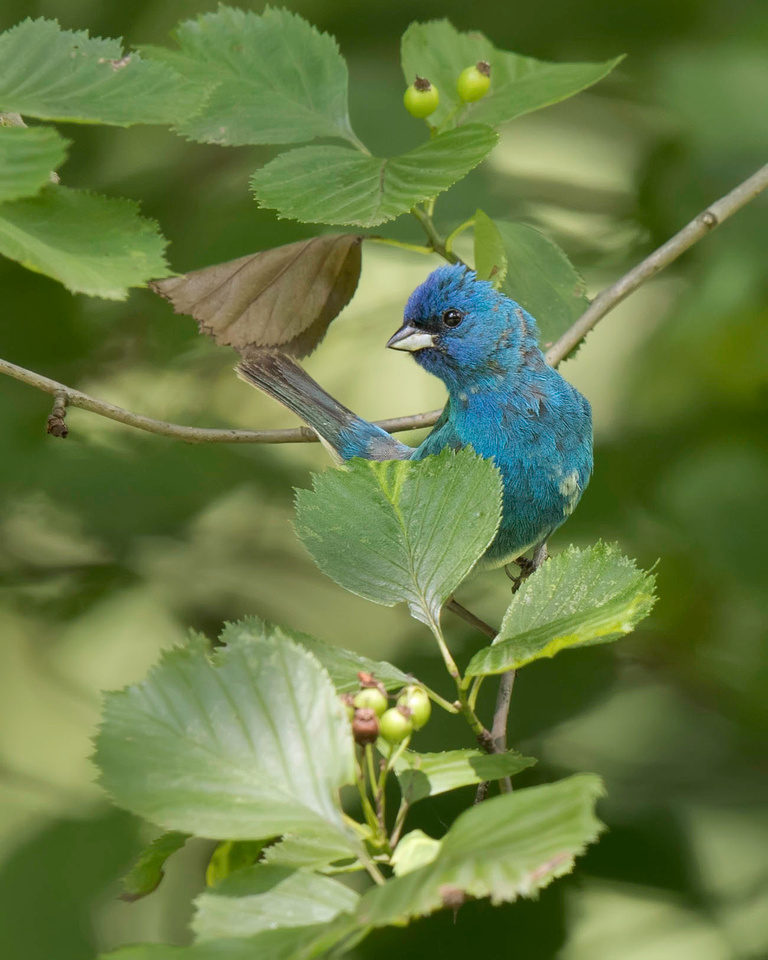 Finally, I saw the reason for the peculiar actions.  They had a nestling that climbed the branch to get up where it could see more. 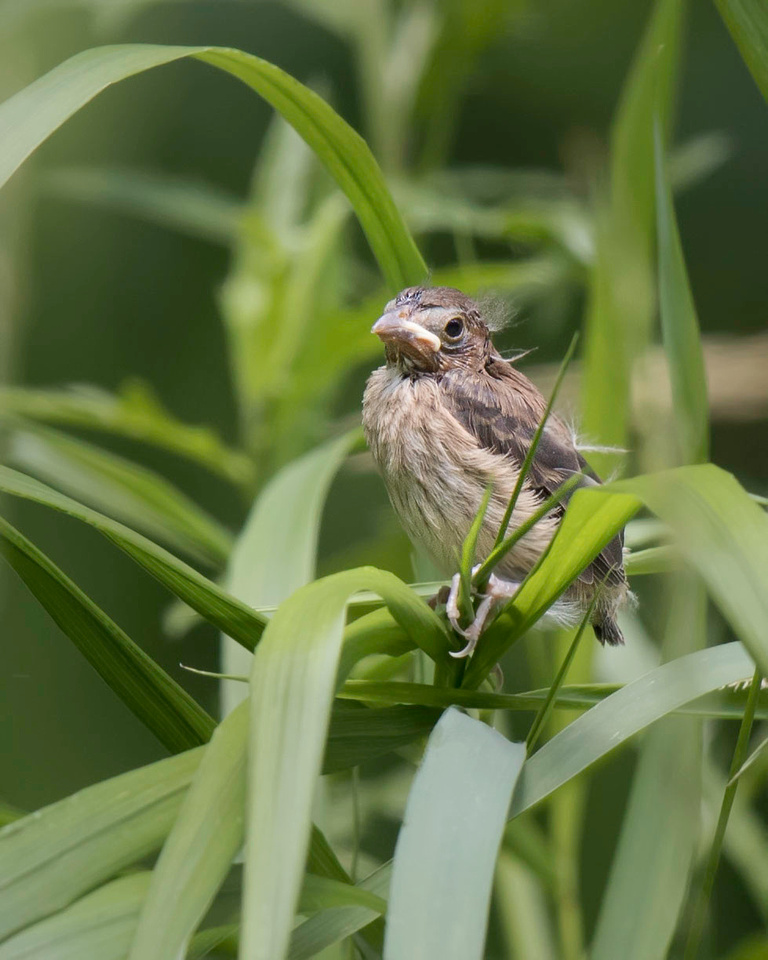 Once I saw the little bunting, I decided to leave and not disturb them anymore.  They obviously wanted to feed their baby but not while I was there.  I was happy to give it space.