The Bald Eagle nesting season is almost over in western Pennsylvania.  I thought this is a good time to reflect on two separate visits I made to an Ohio nest about 65 miles west of the Pennsylvania border.

This nest is very unique because the nest tree is situated on a hillside below the road giving birders and photographers a short 70 yard view into the bole of the nest.

On my first visit the single eaglet was a mere two weeks old. 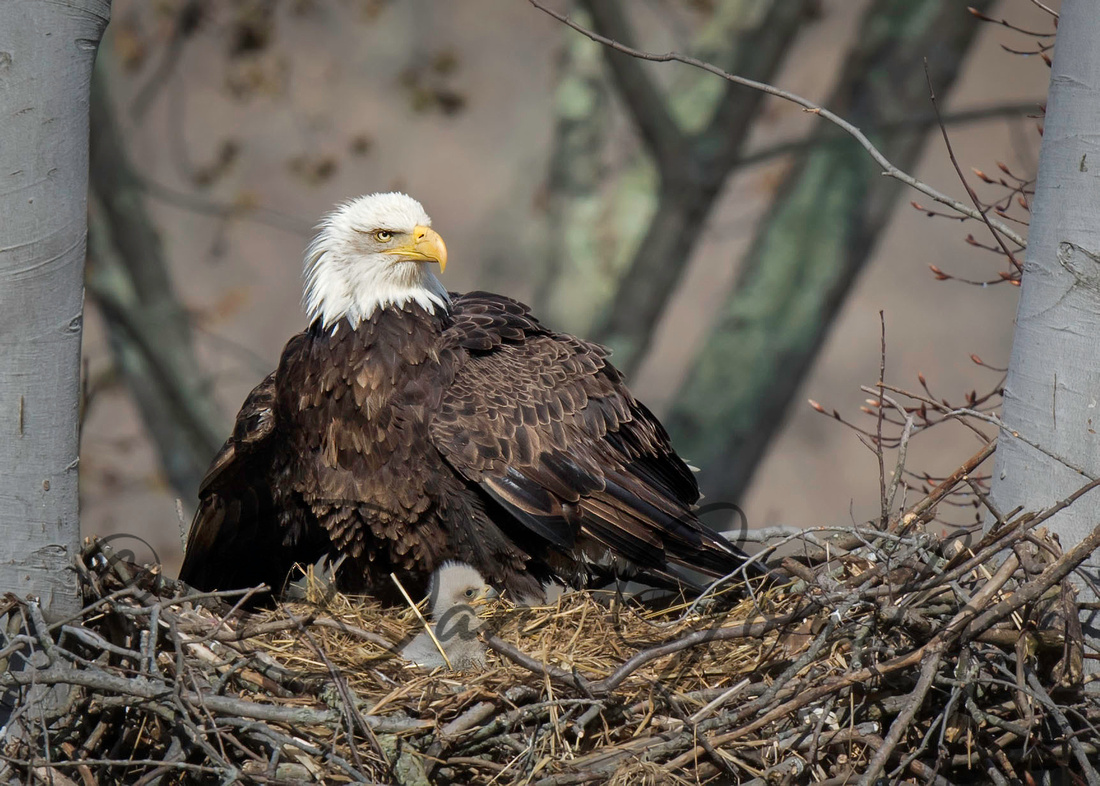 While one adult was away from the nest most of the time, the mate was usually on the nest or perched nearby.  Here is a rare occurrence when the eaglet was alone and gave its wings a stretch. 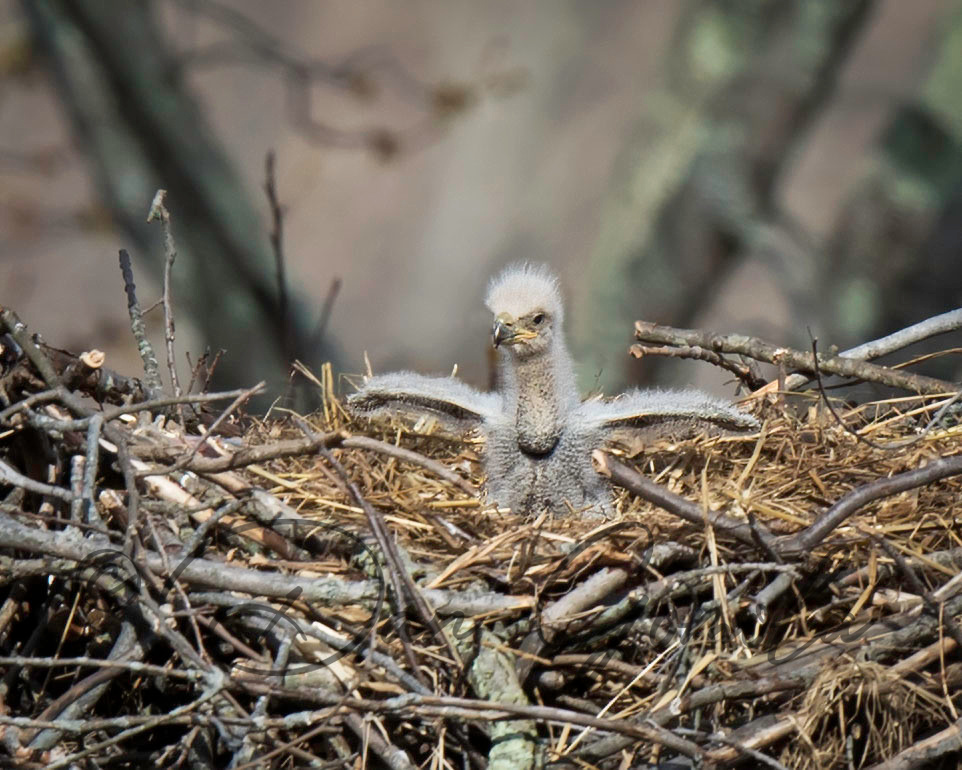 Below is the male sitting on the nest with the eaglet. Normally, you can identify the female because she is larger than the male.  that is true but this female also has a darkening behind and around her eyes. You will see that in later photos. 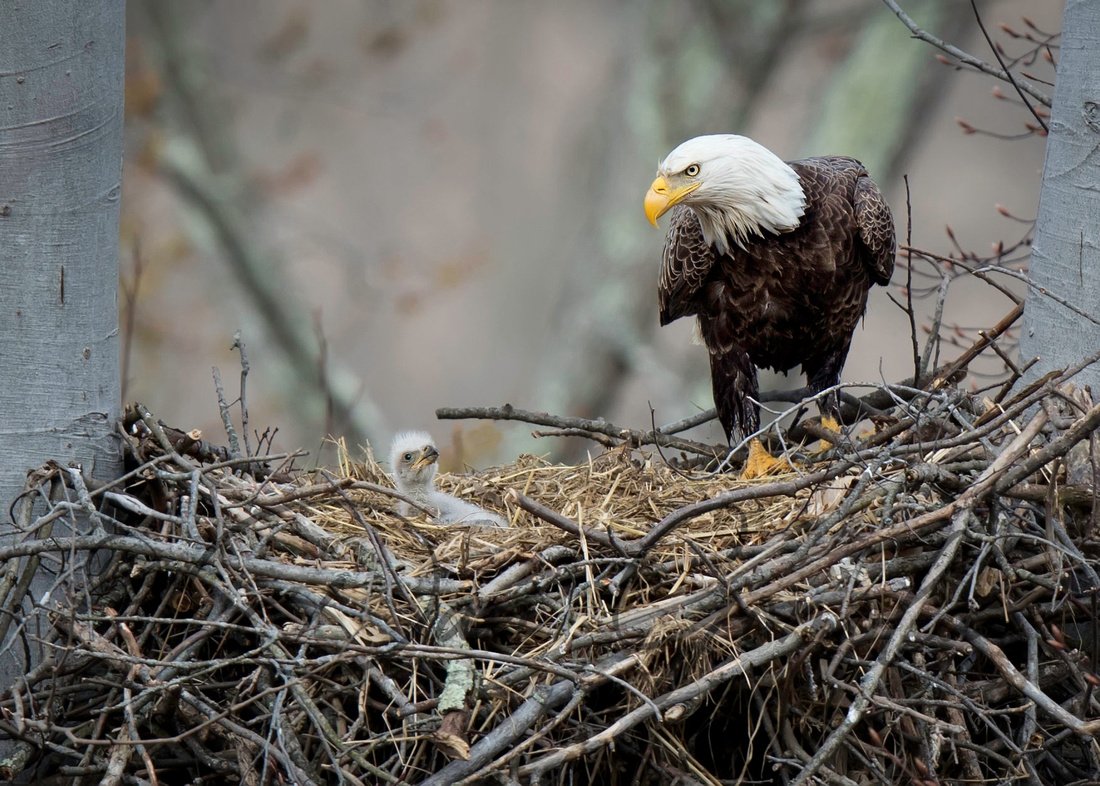 The quality of care a Bald Eagle provides for its young is impressive.  Here is “Dear Ol’ Dad” giving warmth to the inquisitive eaglet. 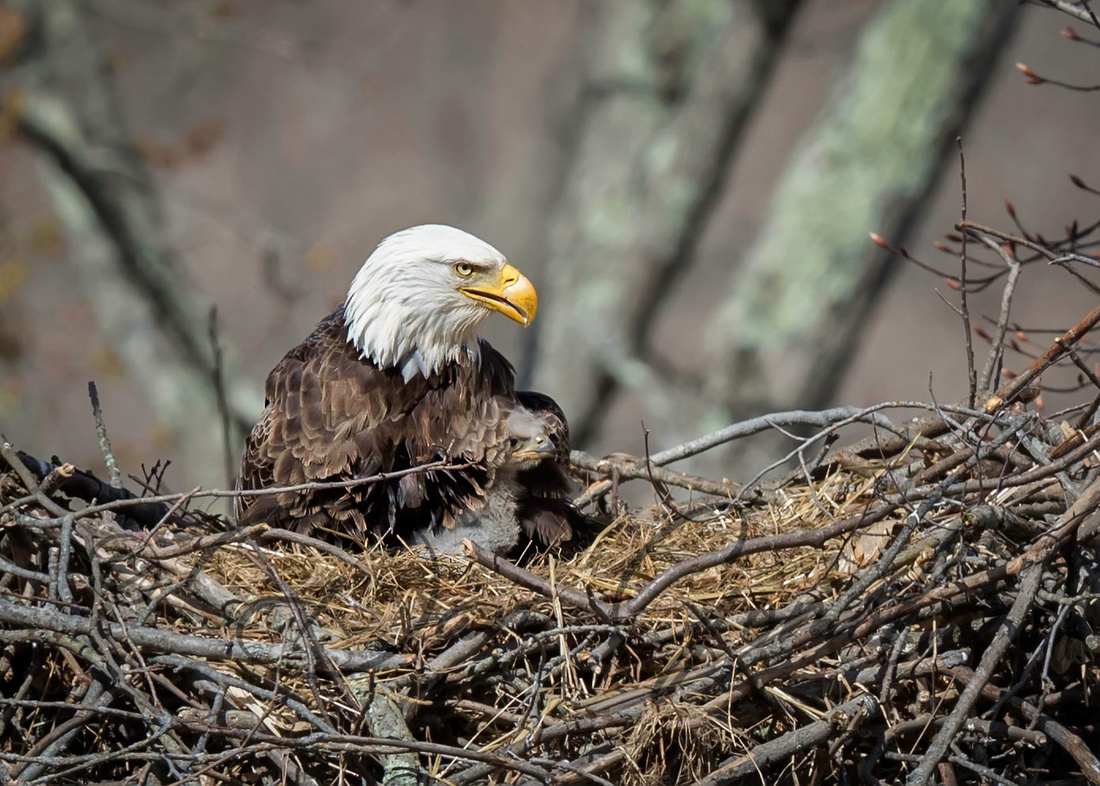 I think the eaglet feels safe with its father. 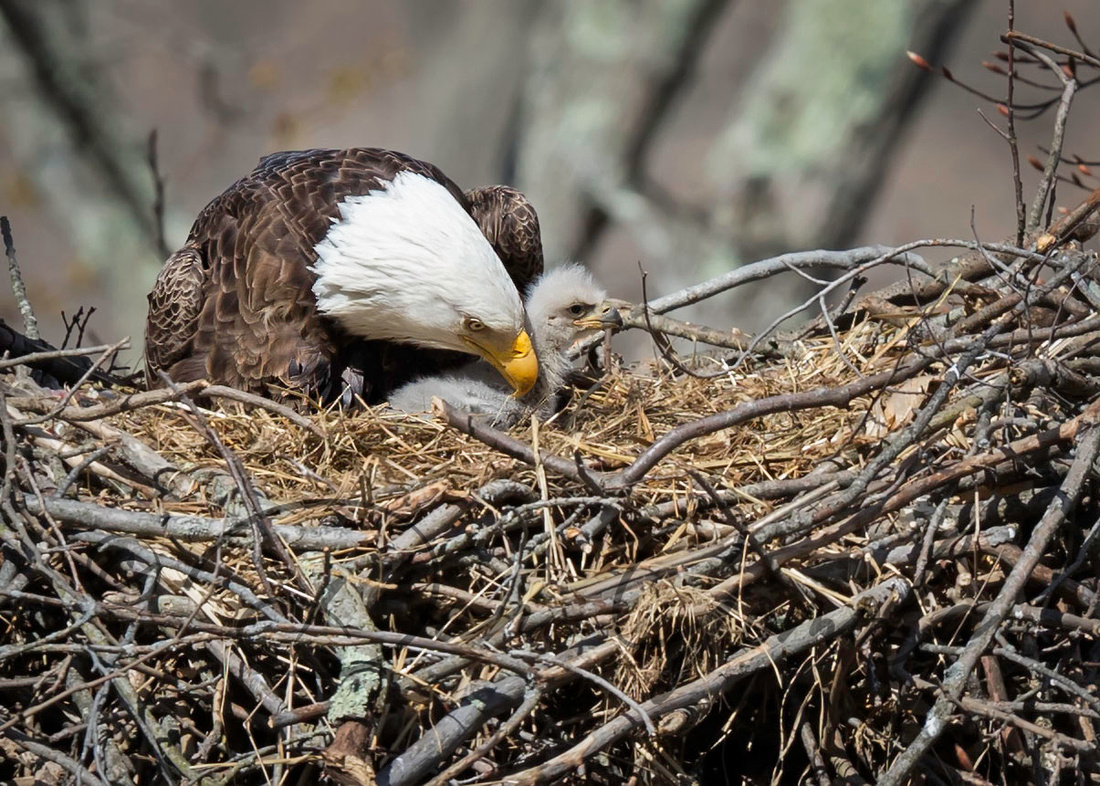 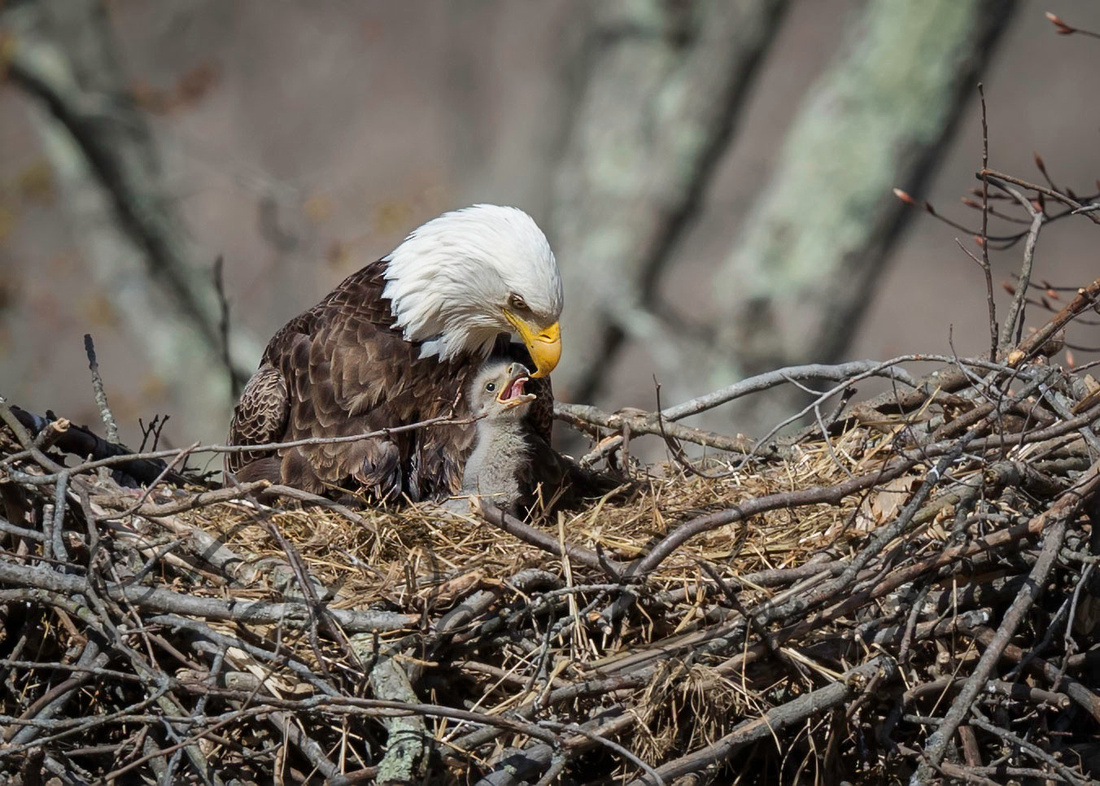 At this age, eaglets are fed quite often.  I imaging it’s because their little bellies can’t hold much food.  Dad was already on the nest when his mate arrived with a half eaten fish.

Bald EagleMale, Female (behind) and Eaglet down in nest

Shortly after mom arrives, the male leaves the nest. 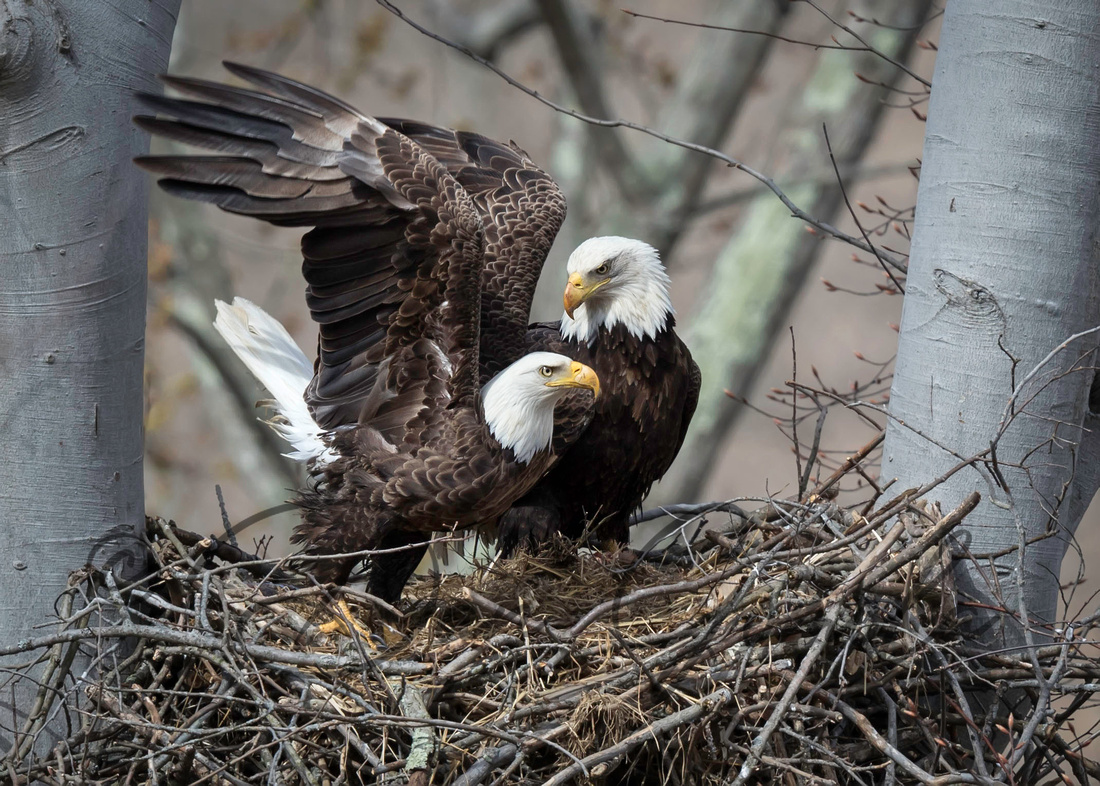 Bald EagleMale, Female and eaglet down in nest

It’s time for a feeding. 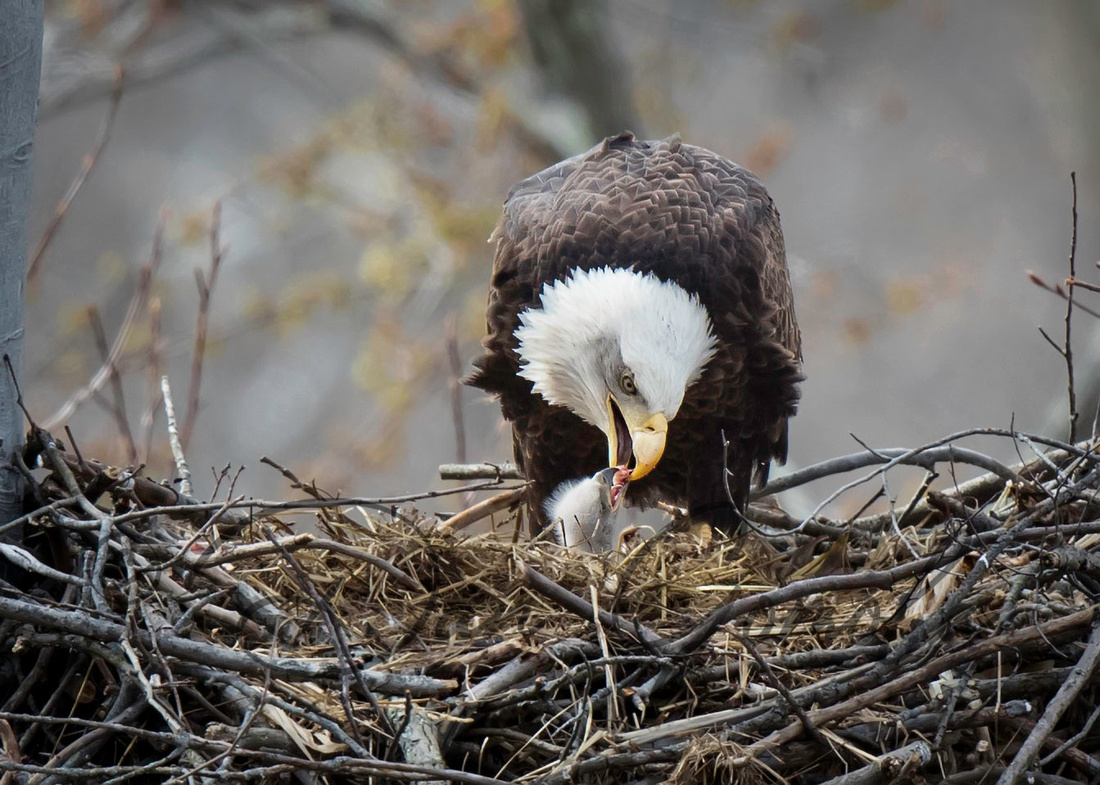 That was the end of my first visit.  I planned a return soon to see how much the eaglet grew.

I did return to the nest site two weeks later when the eaglet was four weeks old.  Look at the difference in size in a short two weeks. 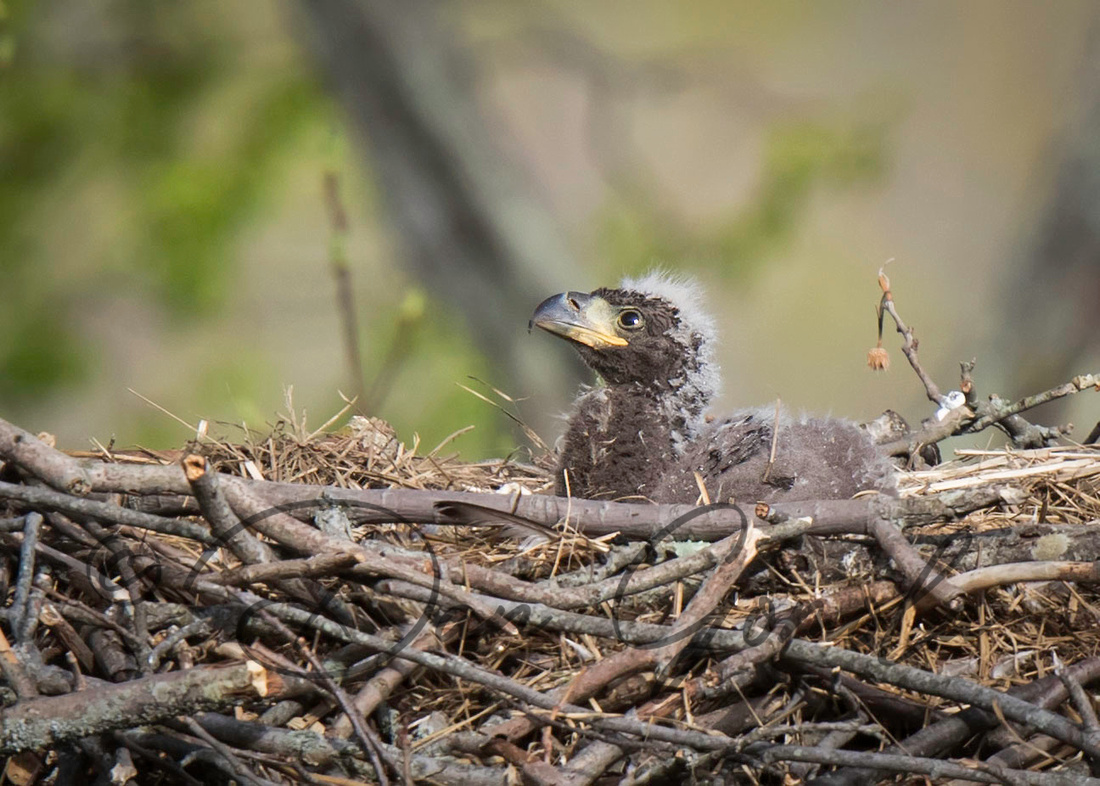 Even though it was much larger, it is still dependent on an adult to tear apart the food.  The next photo is mom feeding the eaglet. 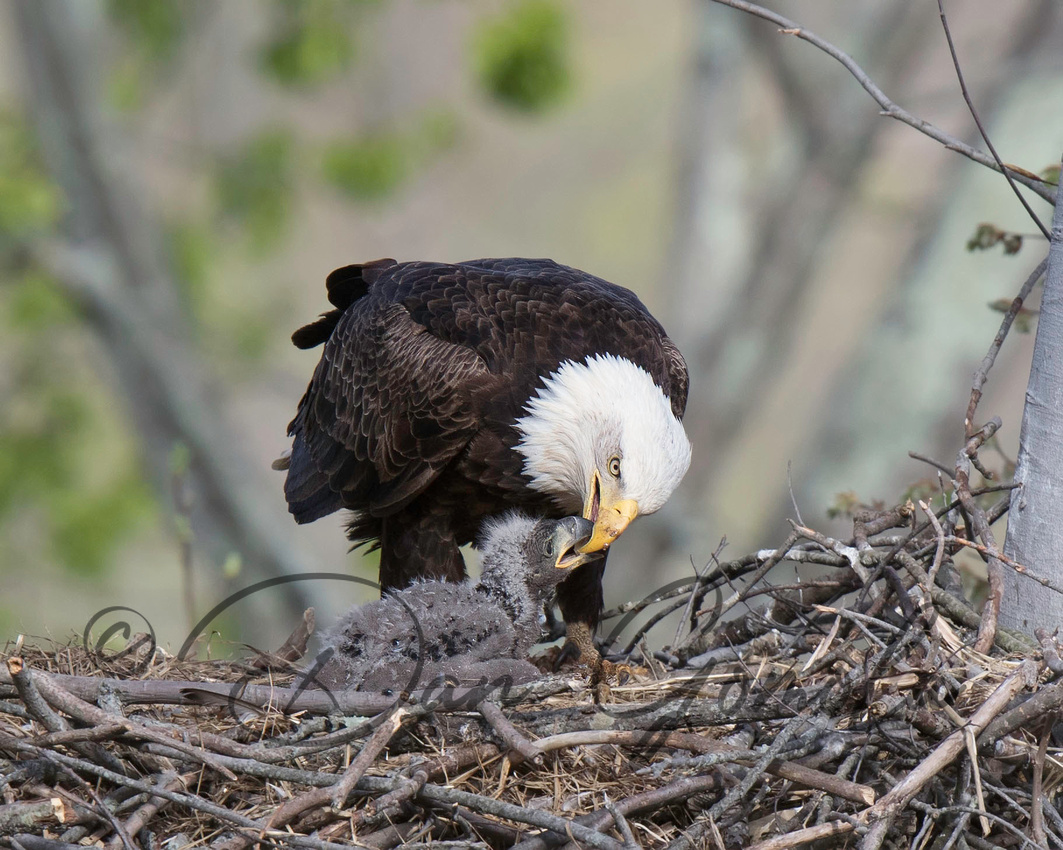 After feeding, the adult fluffs up the grasses in the bole and lays down on top of the eaglet usually causing the eaglet to rest and maybe go to sleep. 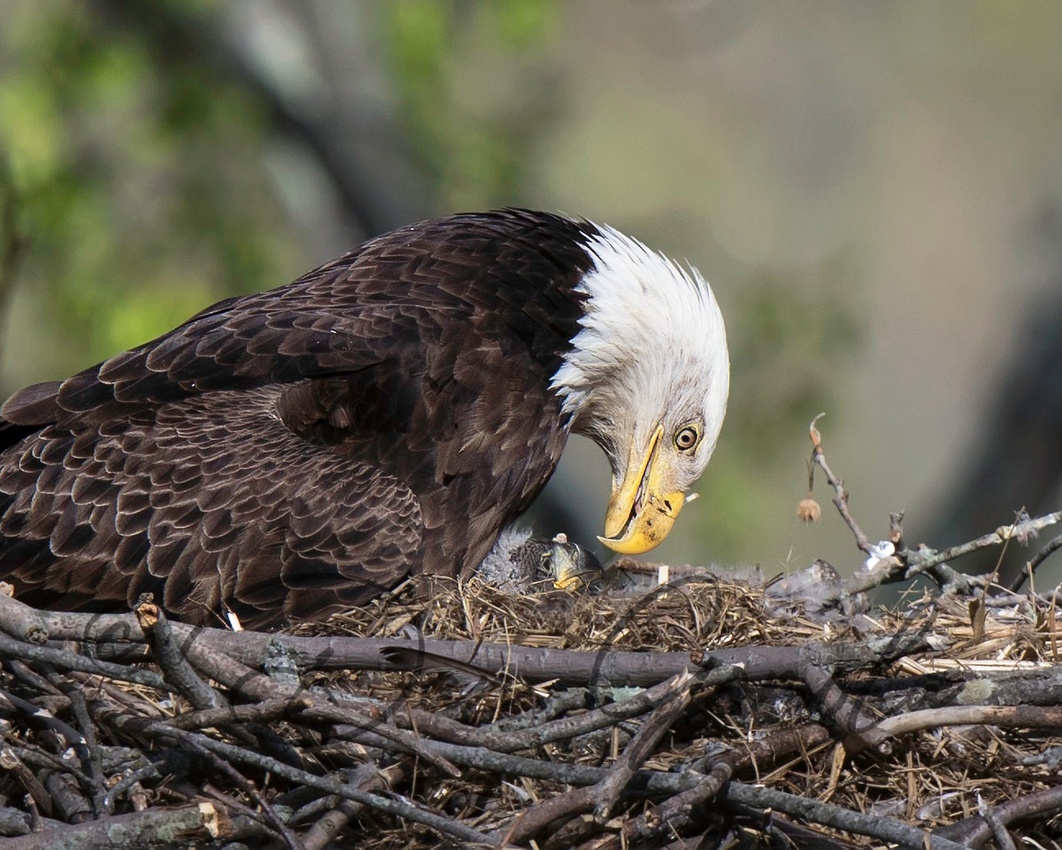 Sometimes the eaglet may take a nap and sometimes it stays alert. 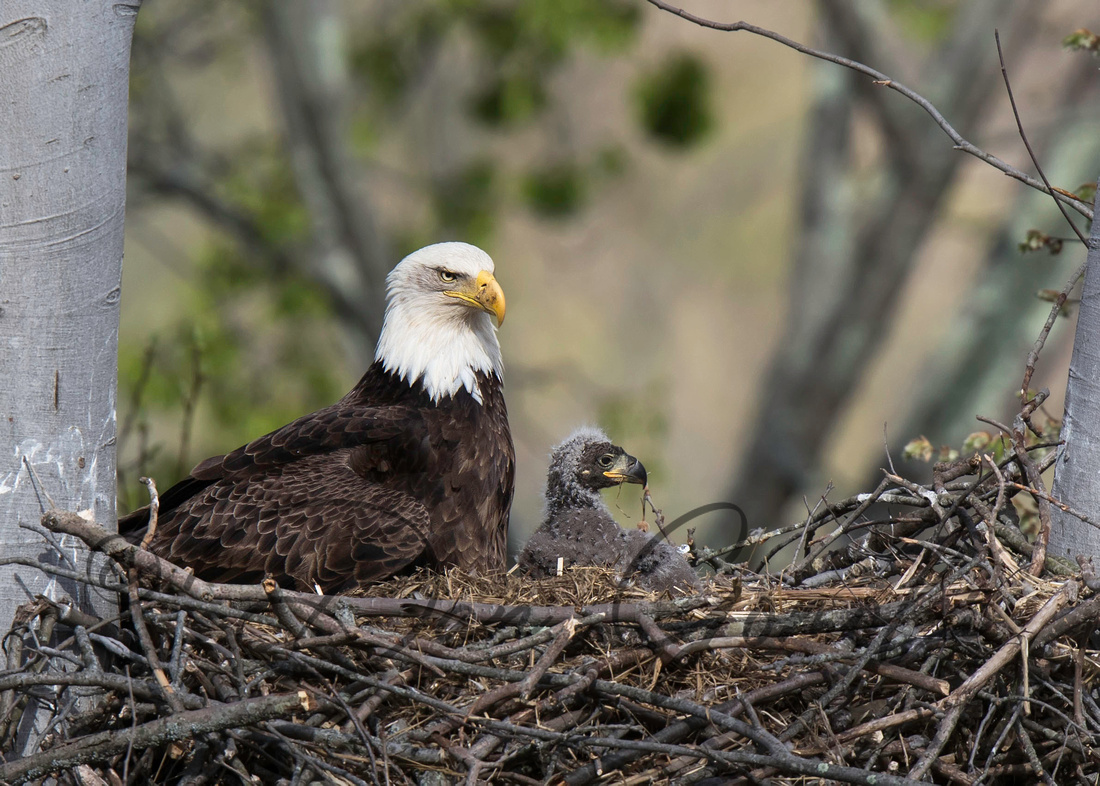 It is comical watching the eaglet maneuver around the nest because it hasn’t grown into its feet yet. 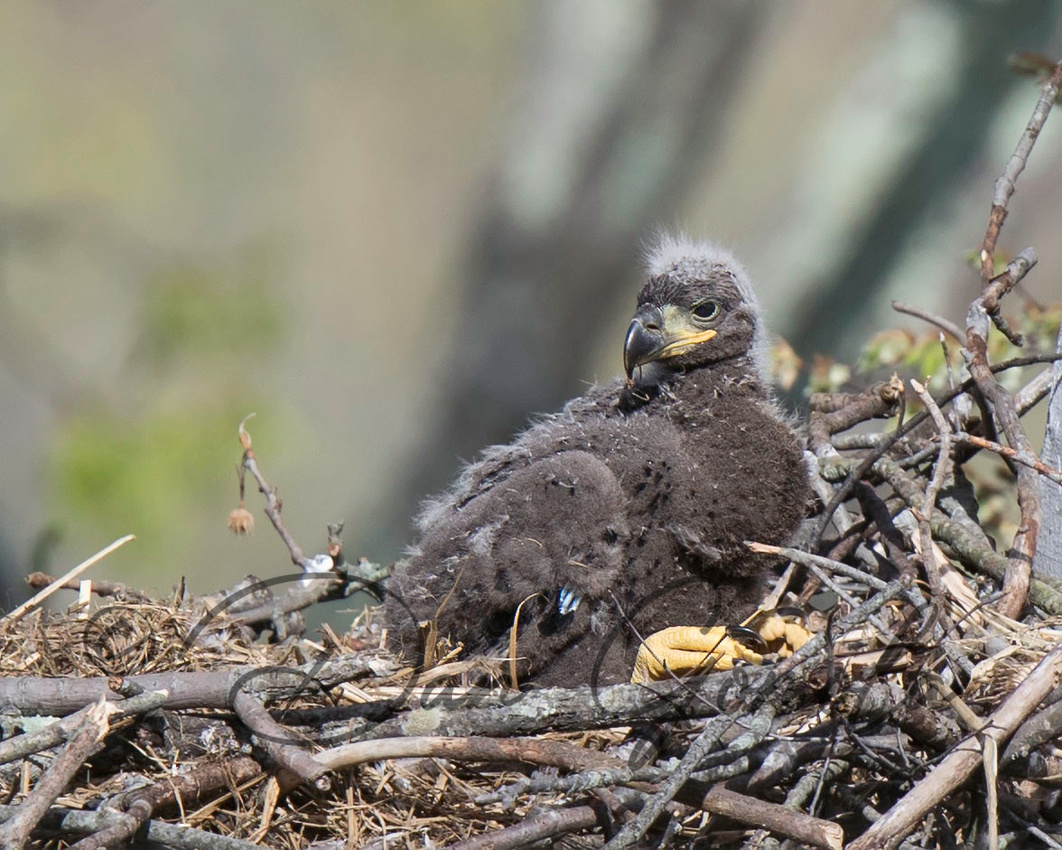 It will be quite some time until these wings are large enough and strong enough to take it soaring into the sky. 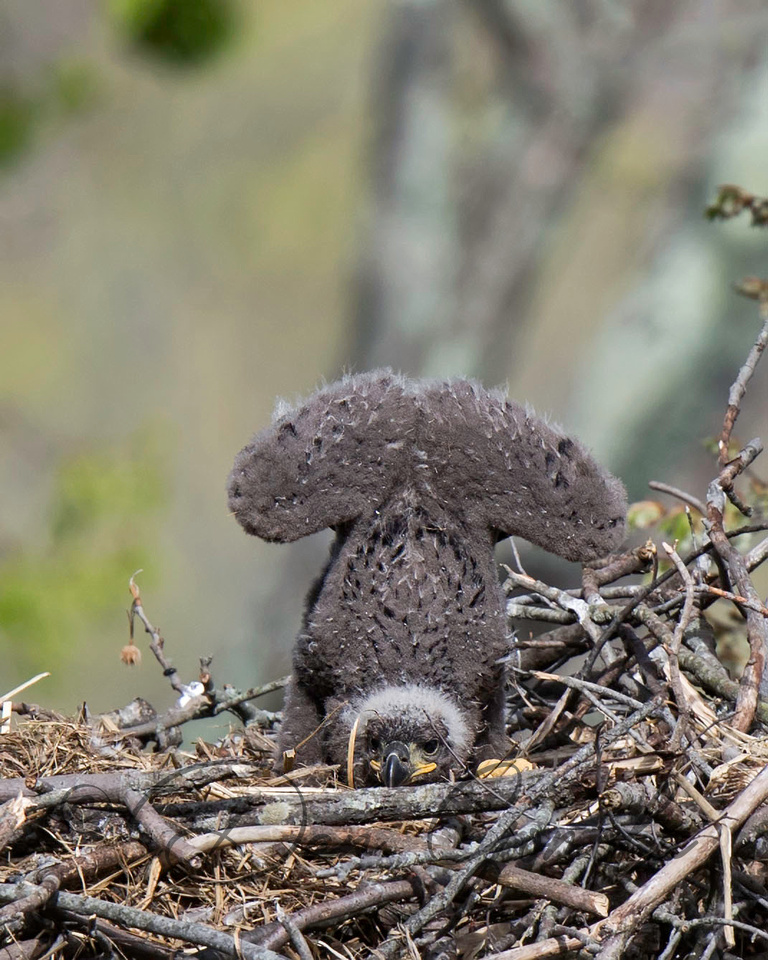 At this age, it seemed like a change of guardian occurred every 2 hours. 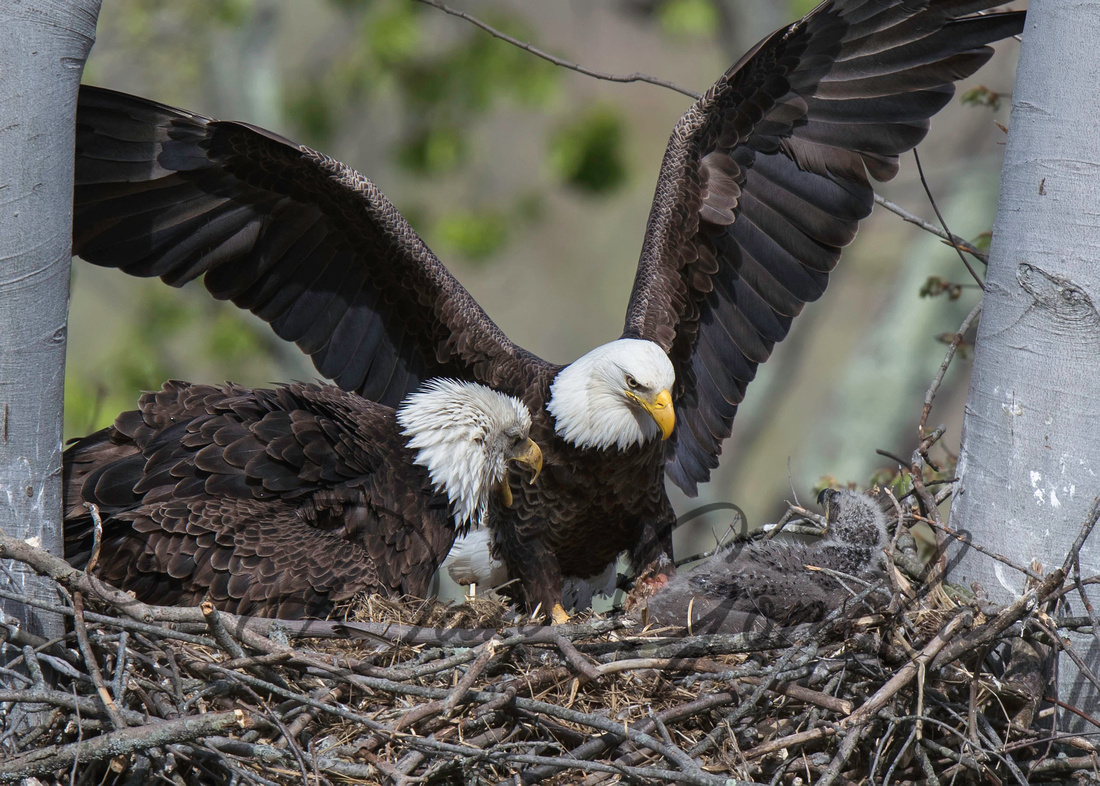 Bald EagleFemale and Male in nest.

Here is mom and eaglet sitting on the nest. 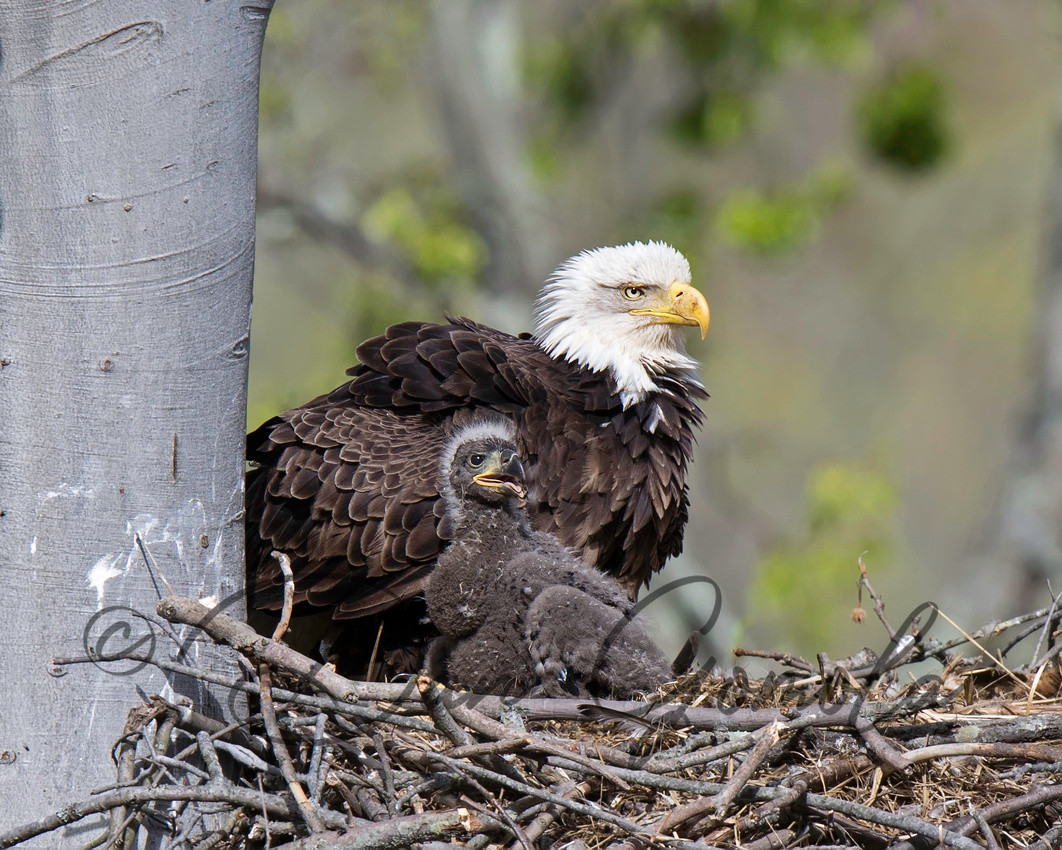 I imagine it can get boring waiting for the eaglet to grow up and fledge the nest. 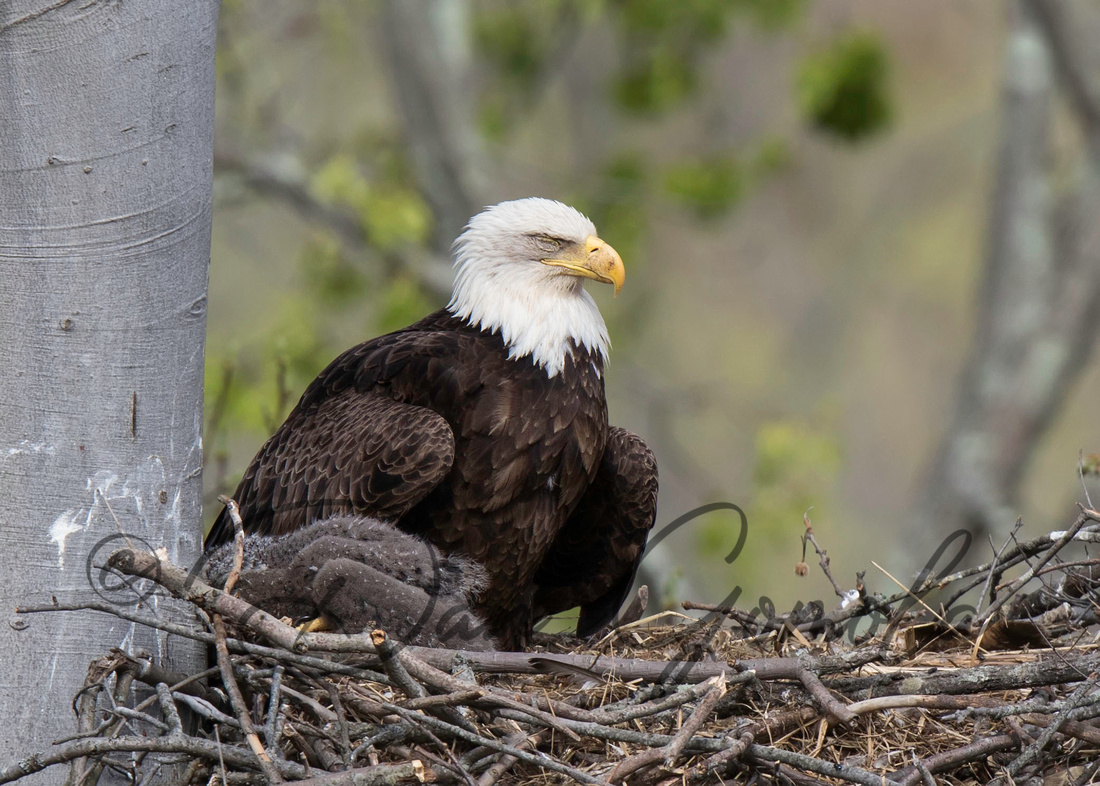 After a nap, it’s feeding time. 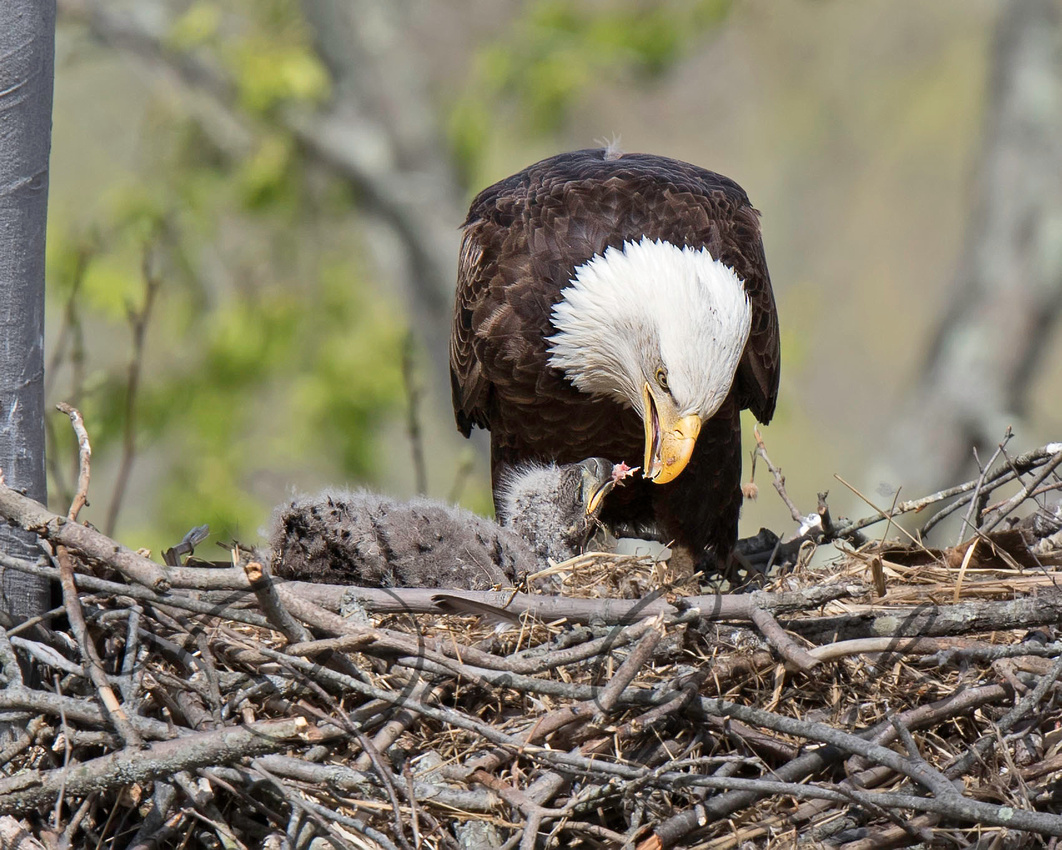 Click the link below to start the video.  It may take 10 seconds or so to buffer so please be patient after you press start. Bald Eagle

Now that the eaglet is getting larger, it gets a little more alone time on the nest.  Below is a photo of the female leaving the nest in route to a nearby branch. 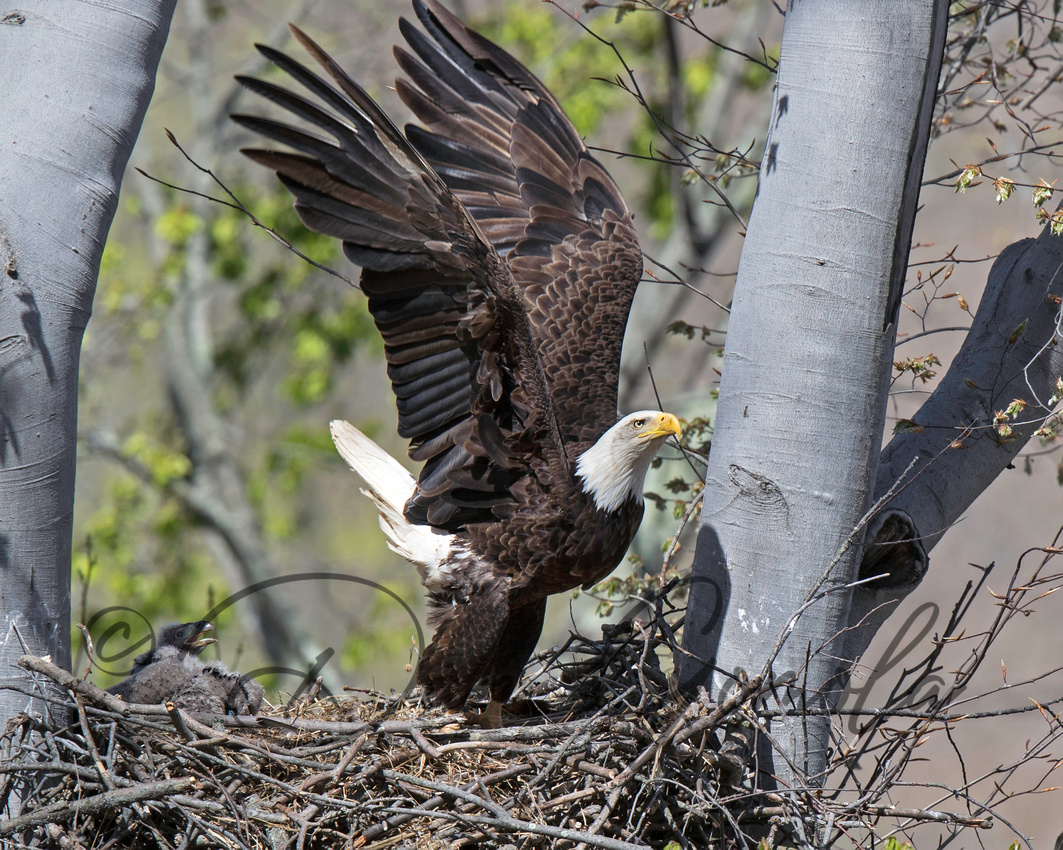 She spent nearly 45 minutes alone on the branch. 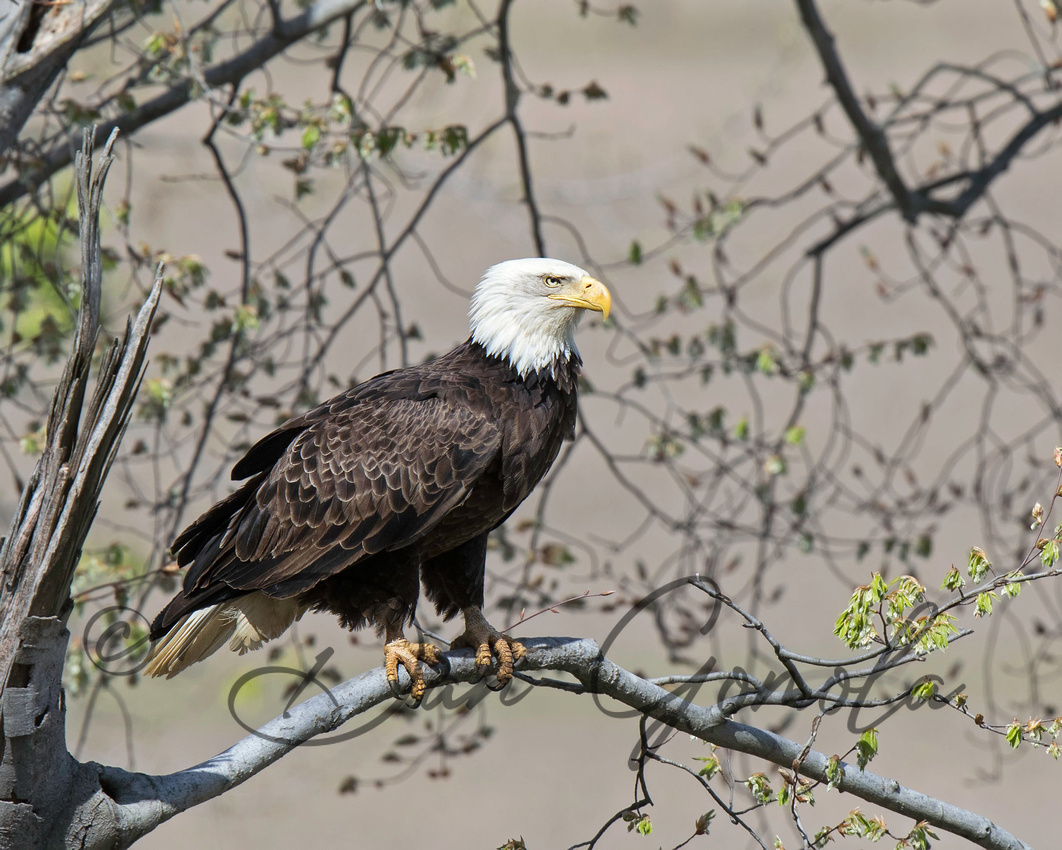 As her mate approached the nest, she left her perch to explore the surrounding countryside.

It was dad’s turn to babysit. 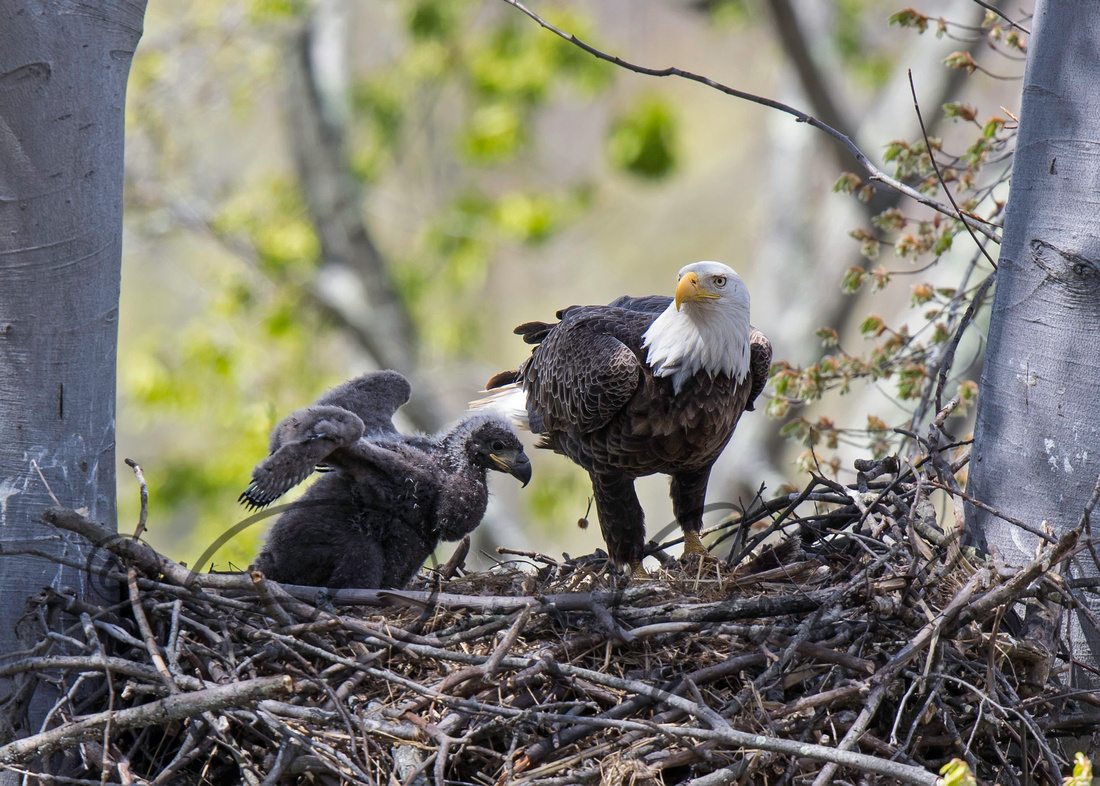 I’ll wrap up this photo blog with a portrait of the eaglet with its father. 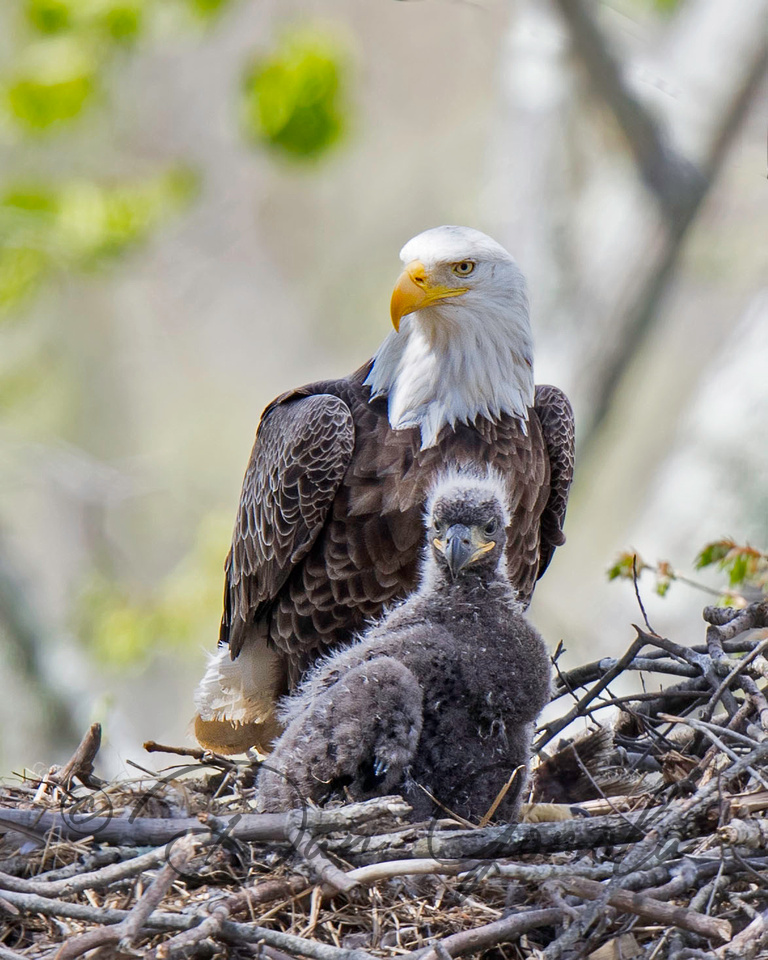 Gordon(non-registered)
Well what a fantastic post, terific action and informative photos, I don't think you can be too disapointed about missing the Pelican.
All the best, Gordon.
Gary Cusic Bramlet(non-registered)
What fantastic work! You have been blessed! Thank you for sharing!
Damian Woodgate(non-registered)
Dan absolutely fantastic, I'm a nest recorder for the BTO (British Trust for Ornithology) I find nests of different species of birds and record the data much like yourself. We put cameras on many of our nests to record the nesting behaviour, thanks for that pal. Great stuff.
Karen Link(non-registered)
Thanks, Dan for sharing your beautiful pictures. Thanks also for giving me directions to the nest. Thoroughly enjoyed taking their pictures, although mine aren't outstanding like yours LOL.
Mark Burkett(non-registered)
Awesome!!!
No comments posted.
Loading...
Subscribe
RSS
Recent Posts
My Experiences During The White-tailed Deer Rut 2022 My Experiences During The Pennsylvania Elk Rut 2022 Great Smoky Mountains 2022 Sometimes, I Like To Shoot Video For the Love of Whitetails Owl Encounters of Early 2021 Pennsylvania Magazine - Meet the Missus 2021 Elk Pre-Rut and Rut Encounters Great Smoky Mountains: My Cades Cove Experience (2021) - Part Three Great Smoky Mountains: My Cades Cove Experience (2021) - Part Two
Keywords
White-tailed Deer Bald Eagle American Elk Benezette Common Yellowthroat Lake Arthur Moraine Great Blue Heron Wood Duck Wild Turkey
Archive
January February March April May June July August September October November December
©Dan Gomola
Powered by ZENFOLIO User Agreement
Cancel
Continue