A Morning in the Marsh

It’s tough to get up at 6 AM Monday through Friday to go to work after getting to bed close to the midnight hour the night before.  By the weekend, your butt is dragging and the thought of sleeping in Saturday morning until 7 or 8 o’clock is really nice.  It doesn’t work that way if you like to photograph wildlife.

On Saturday, April 8th, my alarm sounded at 5 AM to signal the start of my day.  With sleepy eyes, I stumbled into the shower to help regain consciousness.  Once the numbness went away, I remembered why I was torturing myself like that.

Torture is a strong word to describe waking up early to set up in a photo blind along a marsh soon to be visited by various species of waterfowl.  It is amazing to have the likes of Wood Duck, Hooded Merganser, Bufflehead, Ring-necked Duck and other species swim within 20 feet of your lens while being unaware that you are there.

This photo blog documents one morning in April in a photo blind, at a marsh in Butler County, Pennsylvania.

I met up with my friend Jake Dingel before sunrise that Saturday morning and we entered the woods on our way to a marsh that is adjacent to a large pond.  Once we were set up in our separate photo blinds, we waited.  There were Canada Geese present on the pond already but it was too dark to get a quality photograph.  Besides, once they calmed down after our rude interruption, they floated around as though we were no longer there.

Then the sun began to rise. 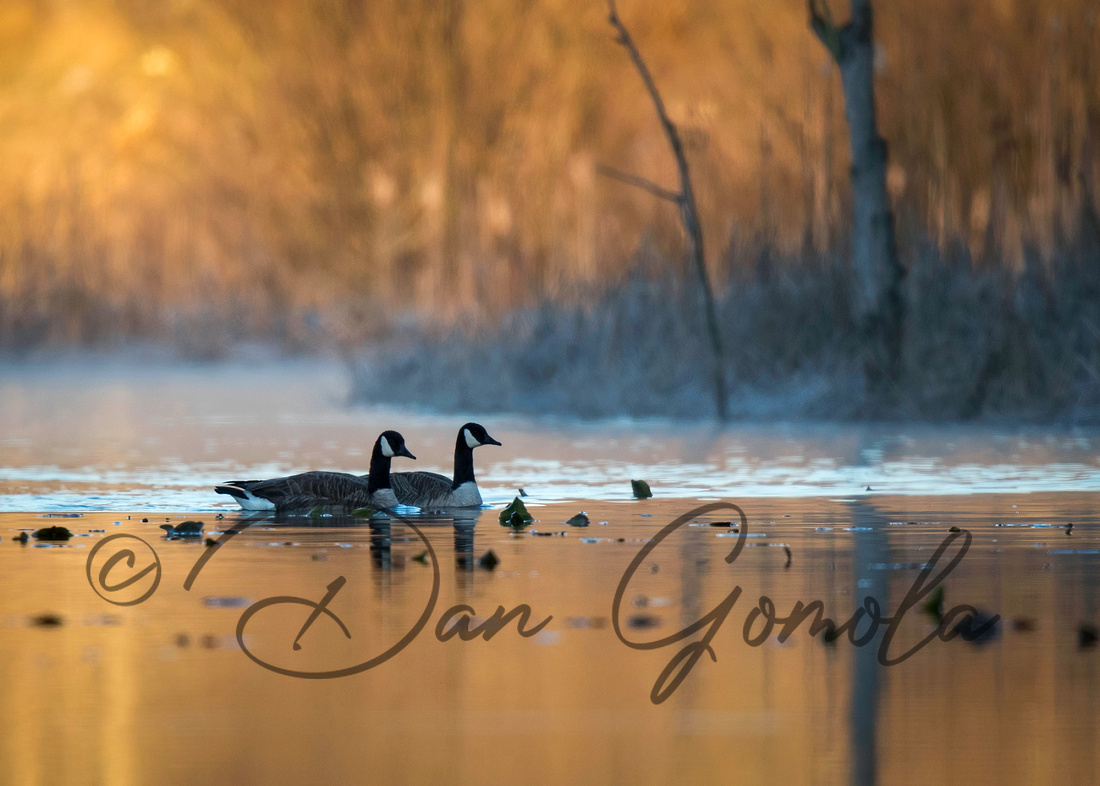 Not long after we set up, waterfowl sightings began to increase.  In a darker section of the pond was a diving and resurfacing Pied-billed Grebe. 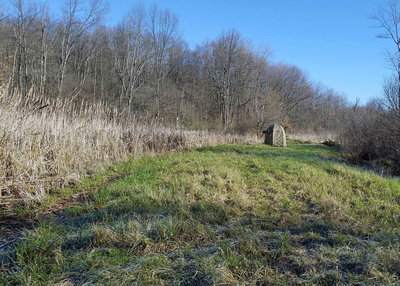 After a short sit, the sun rose and lit up the pond in front of us.  Jake set up his blind on one side of the pond and keeping the sun behind me, I set up mine about 40 yards away.  Last years’ cattails separated our views of the water.

There were a few Ring-necked Ducks in the distance but they suddenly disappeared.  Then the Canada Geese became very vocal.  I received a text from Jake telling me to look in the big tree to the right of the pond.  This was the reason for the commotion. 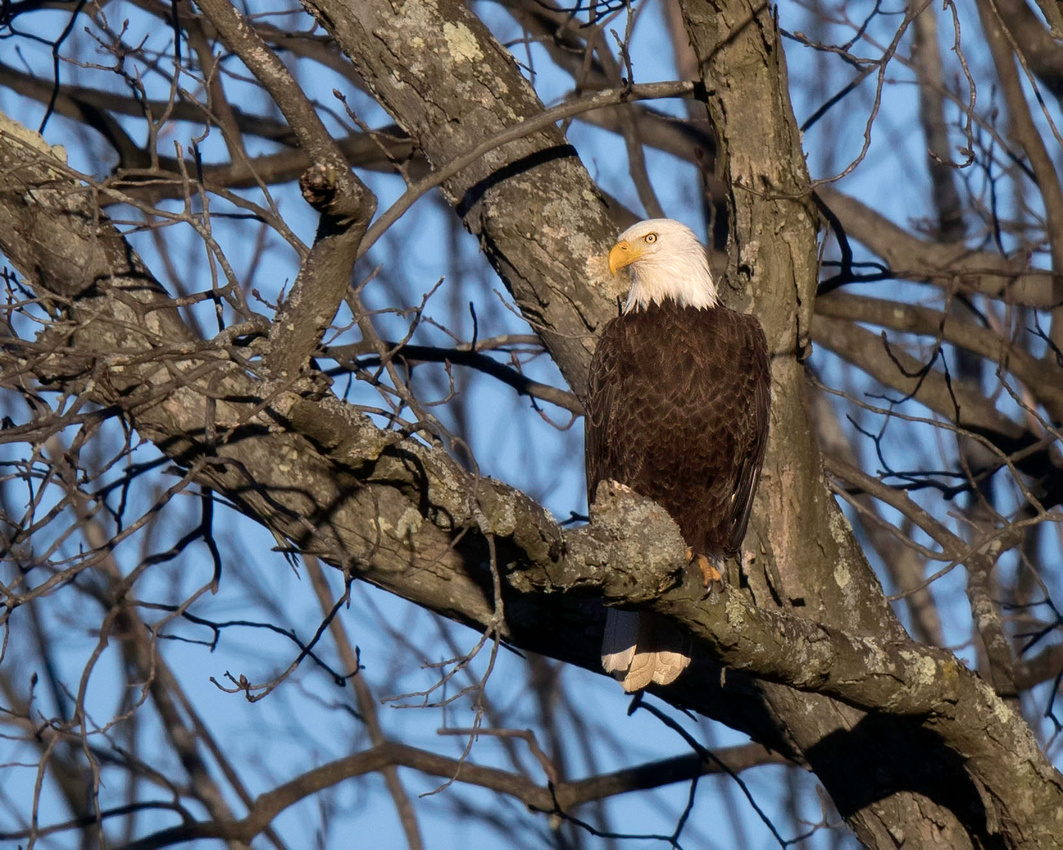 There was about 15 minutes of quiet time until the Bald Eagle finally flew off.  With its nest being within ¼ mile from the pond, I could see it in the distance throughout the morning.

With the eagle gone, activity began to pick up.  This Ring-necked Duck pair were diving for food and eventually came near me.  Notice the water on the head and bill of the female as she resurfaced.  The waxy layer of a duck’s feathers causes a connection between her and the water surface as the rest rolled off like “water marbles”. 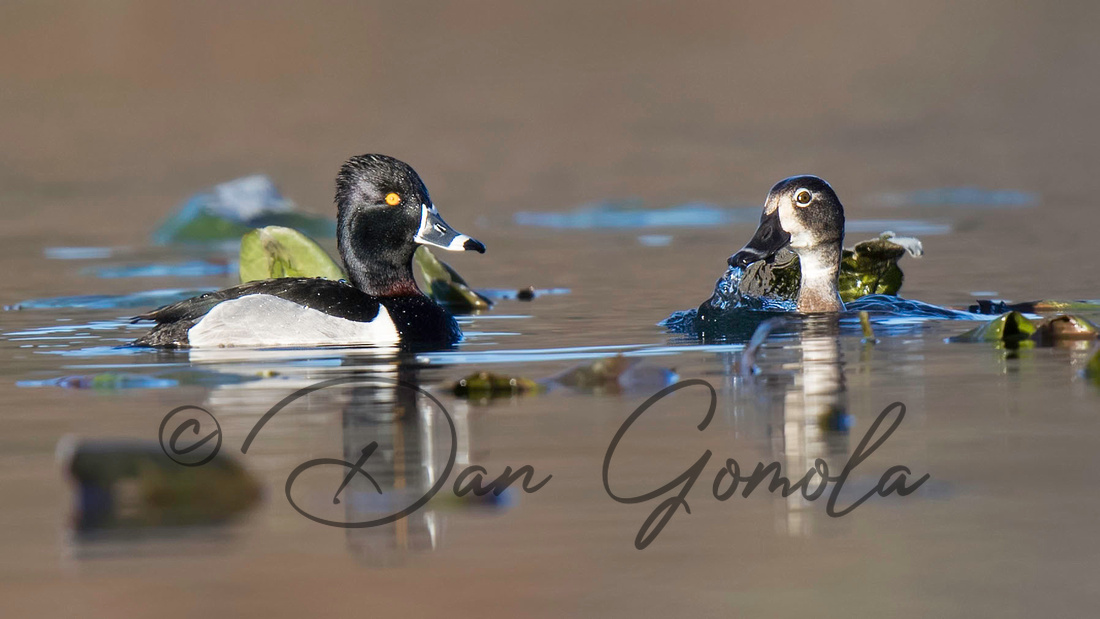 I had a brief few seconds as both drake and hen were on the surface together.

The first Wood Ducks of the morning came into view across the pond.  After staying in a far section of the water, they swam close to a nesting box.  The female flew up to investigate. 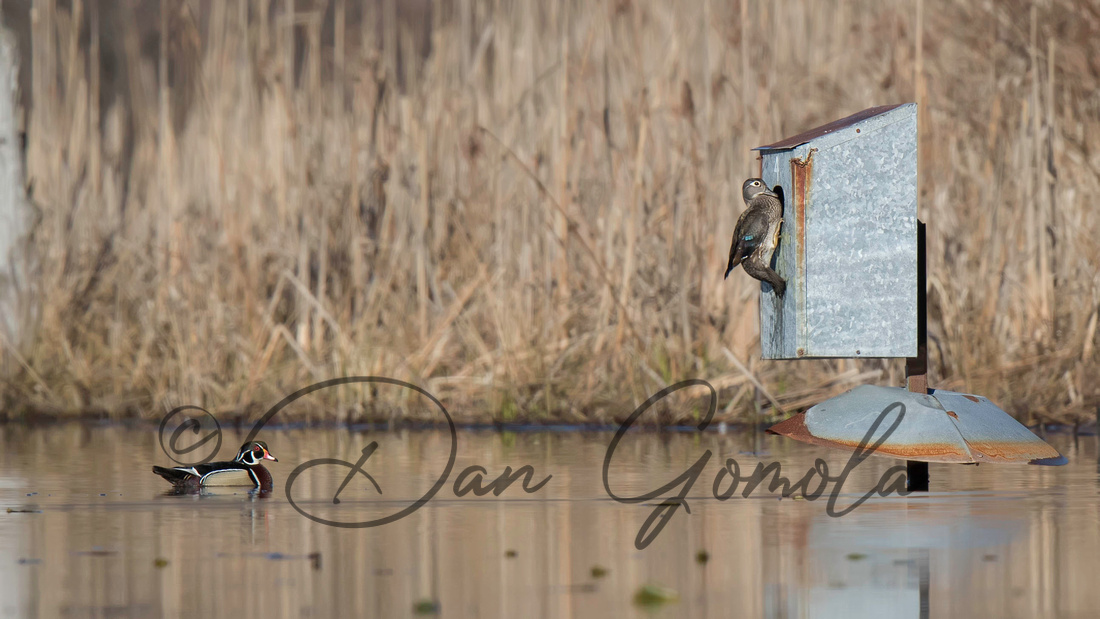 Over the course of the morning we saw several Wood Ducks.  They would fly in, swim around the pond, and fly out.  At one point a lone female Wood Duck landed on a stump in the water.

Thanks to long, strong claws, the Wood Duck is one of the few species that can perch on branches. They are the only duck native to the United States and Canada to have that ability. 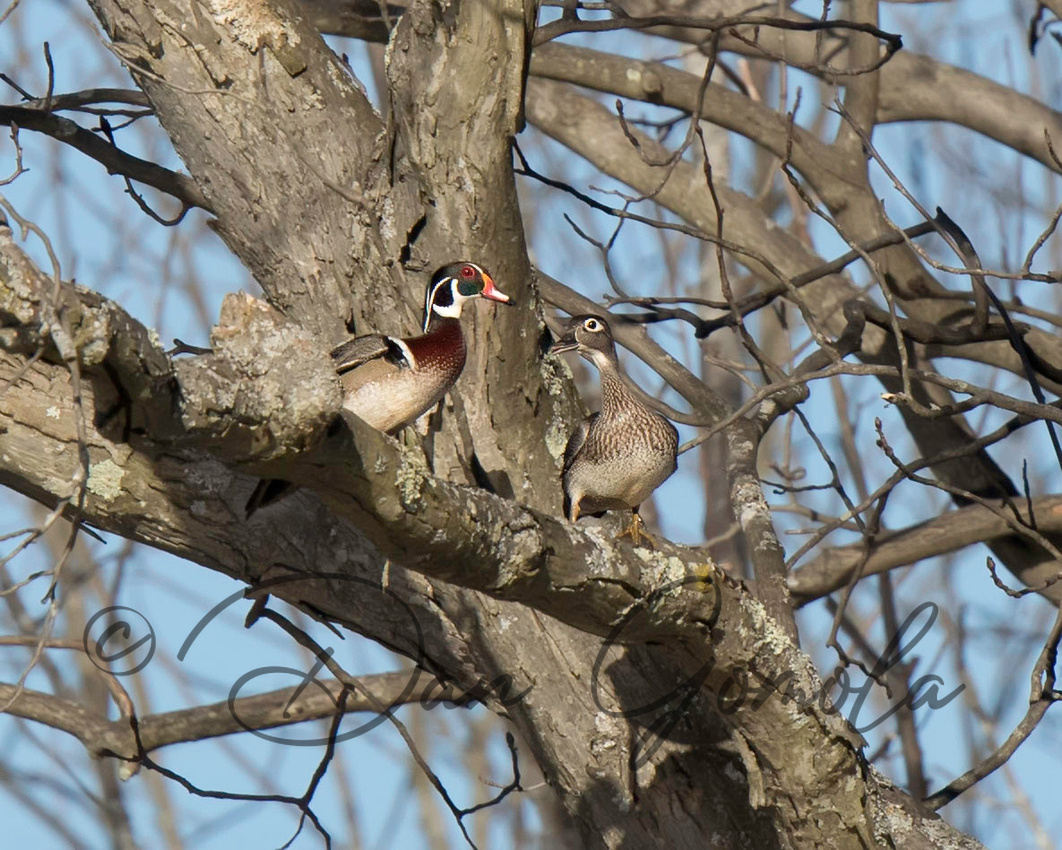 Most Wood Ducks were swimming in pairs or small rafts and occasionally, a male would go off by himself. 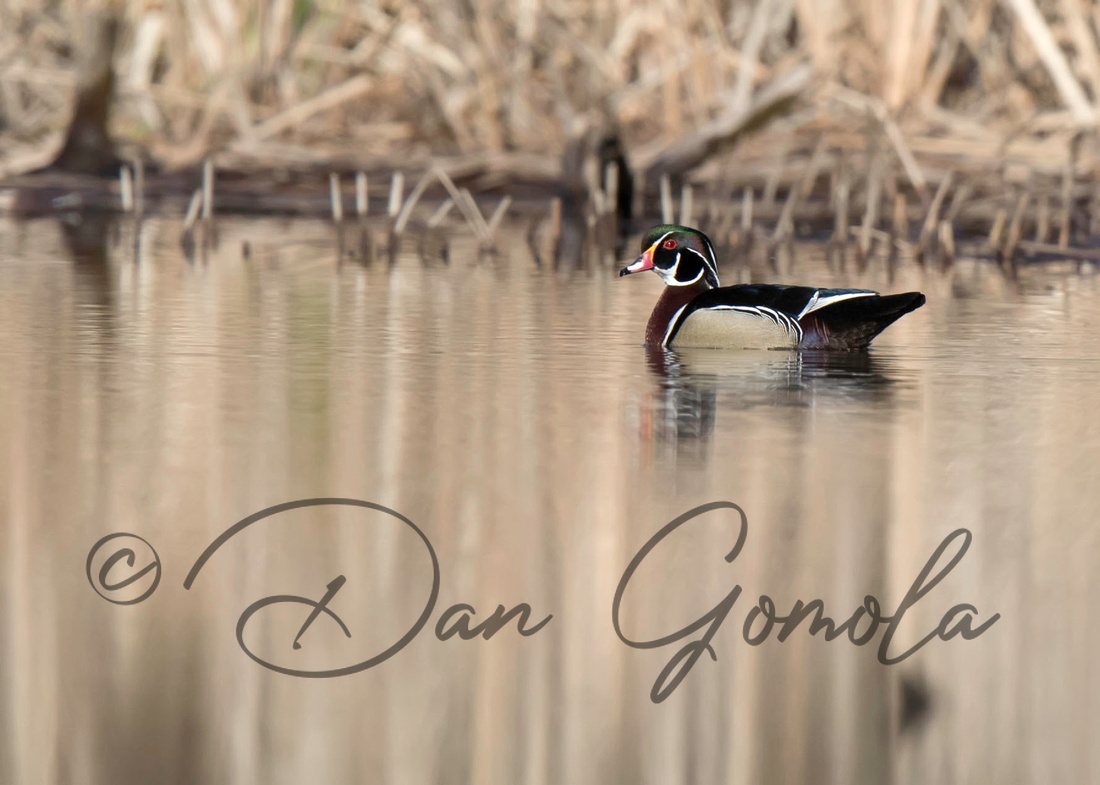 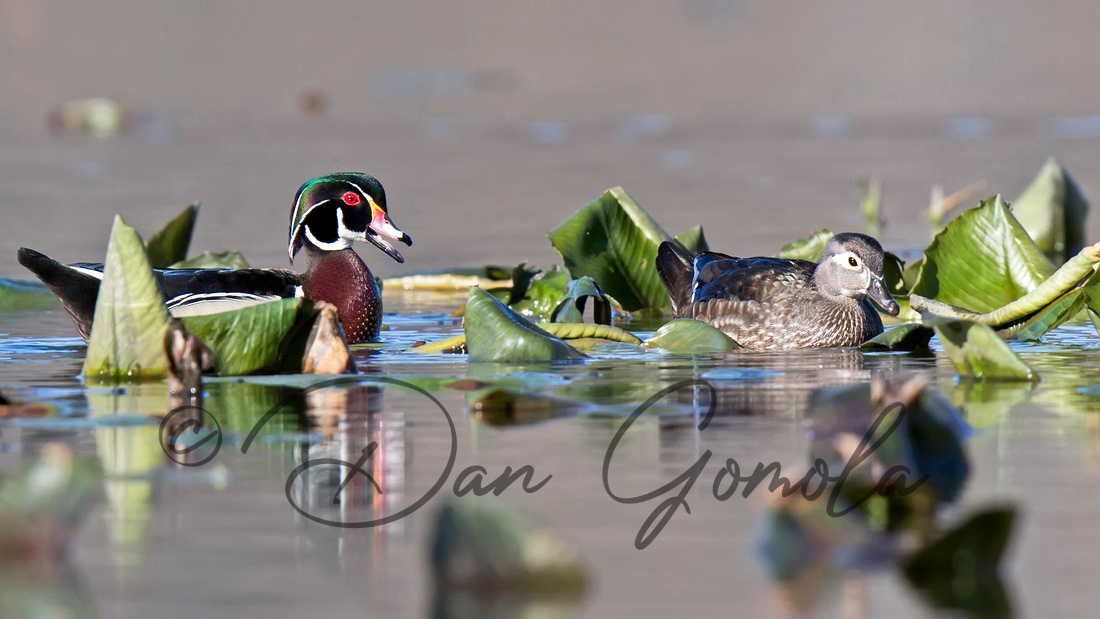 This small Canada Goose was getting chased around the pond all morning by mating pairs of geese. 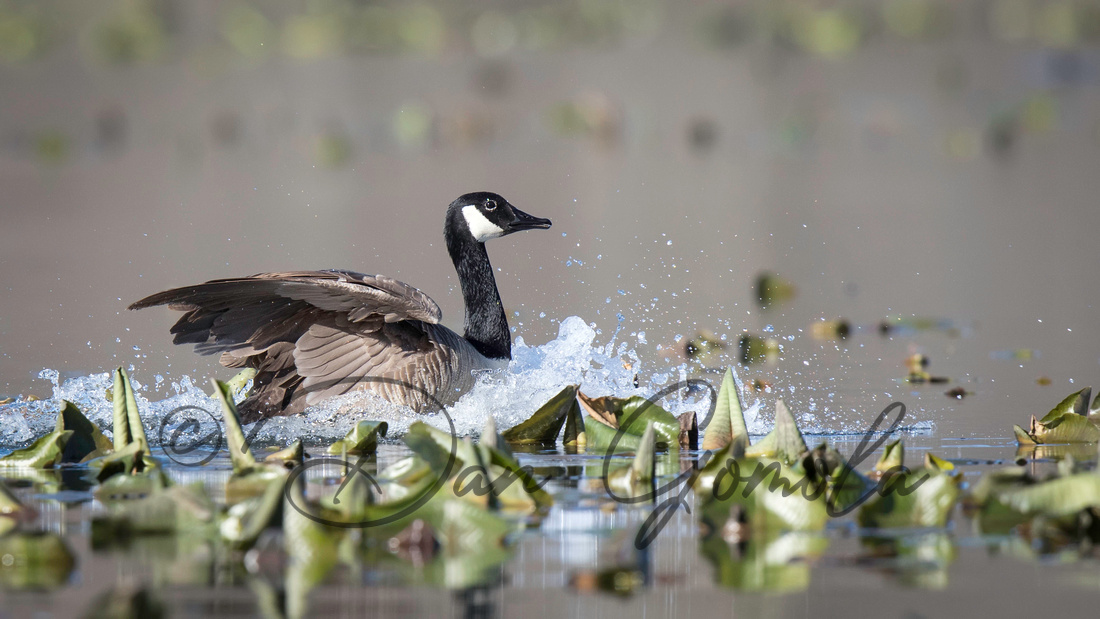 Finally, one of two pairs of Hooded Mergansers began to come our way.  They spent most of the morning completely across the pond. 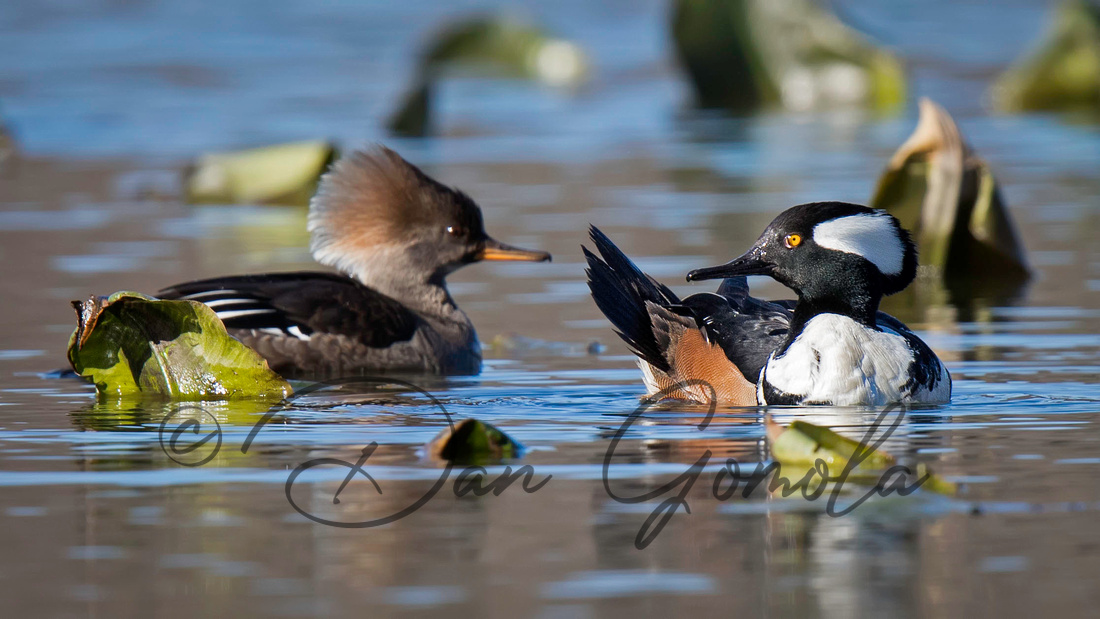 By this time, there were several Wood Ducks spread across the pond. 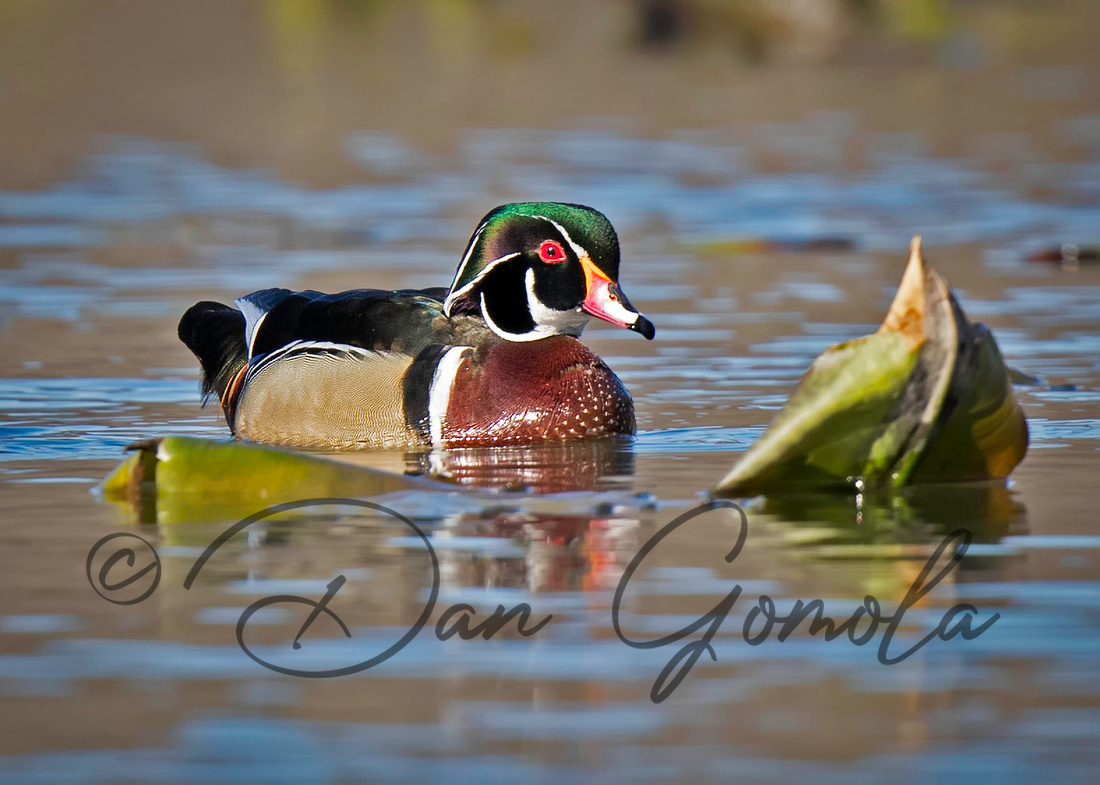 This is one happy fellow! 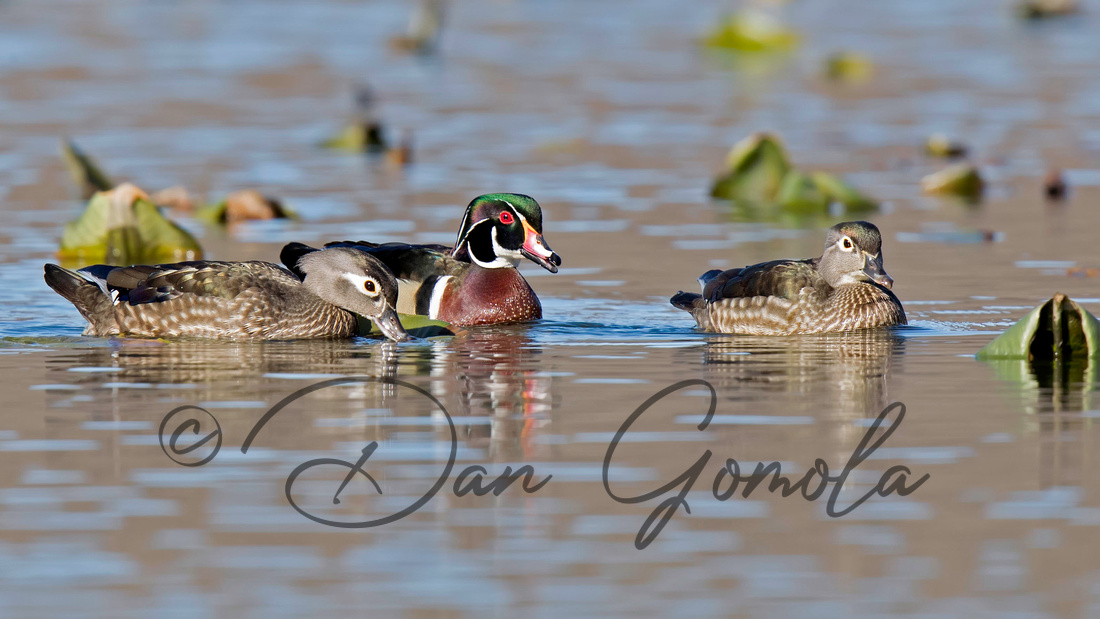 We had two female Buffleheads diving under the water all morning but there wasn't a male in sight. 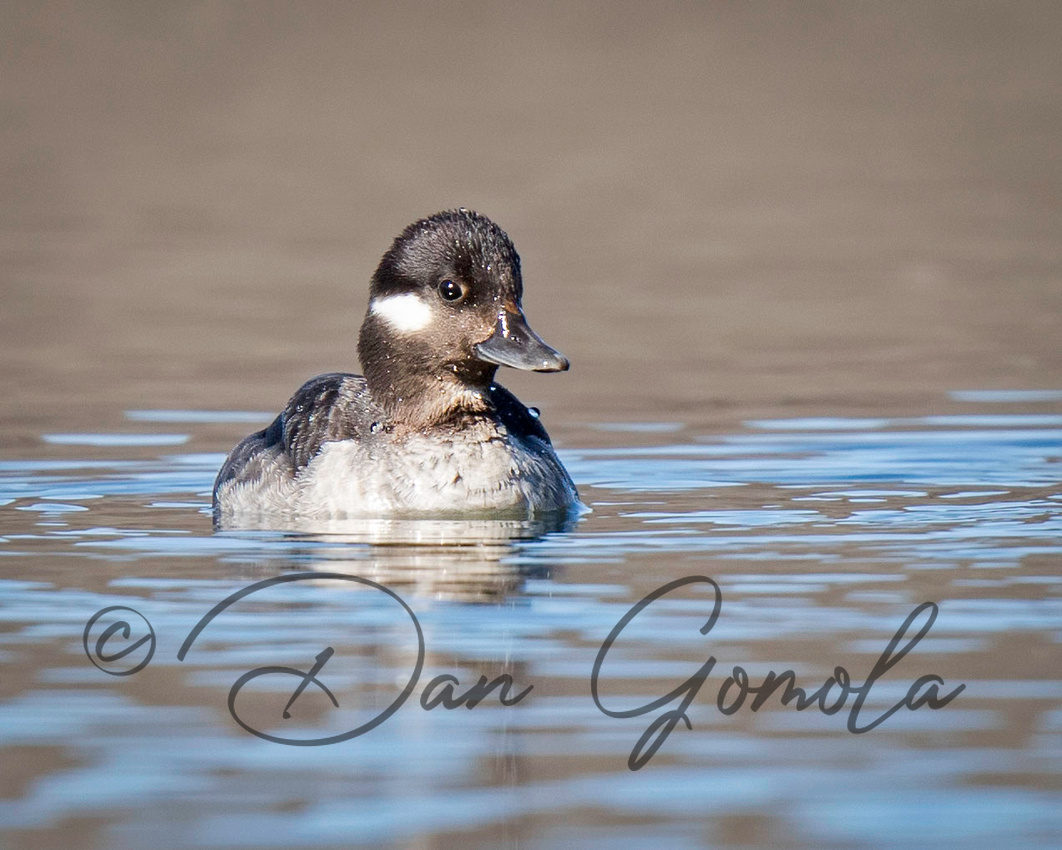 As the elusive Hooded Mergansers came closer, I had plenty of opportunity for portraits. 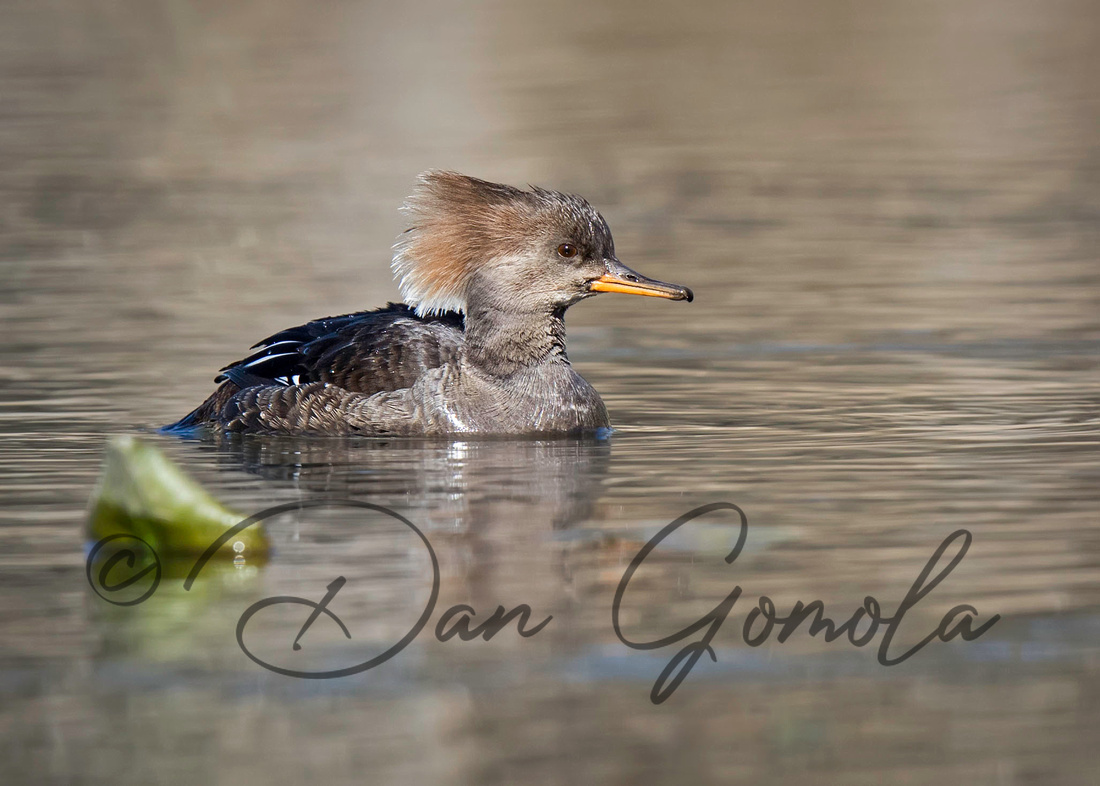 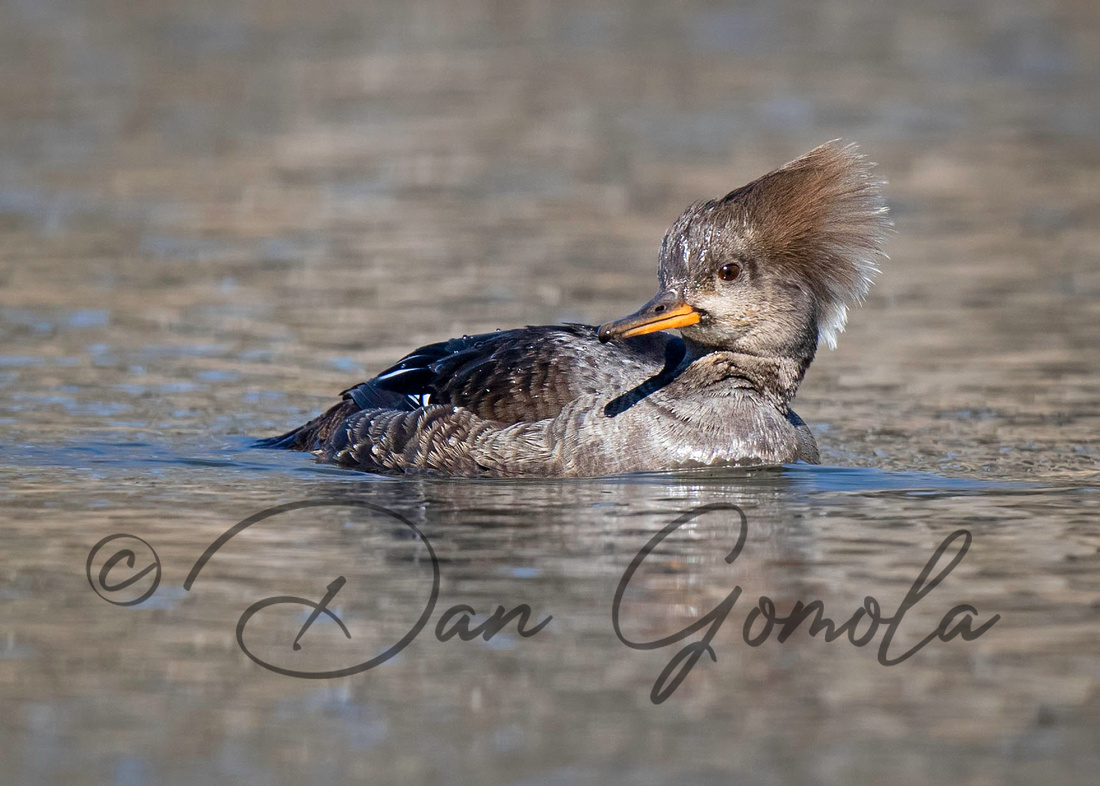 Sometimes, the Hooded Mergansers would swim to my right heading toward Jake’s blind.  Since cattails blocked his view, I’d text him to let him know they are coming and as soon as I pressed “send”, they would turn around and continue to entertain me.  At one point Jake texted me to say, “You must have minnows in your pocket?” 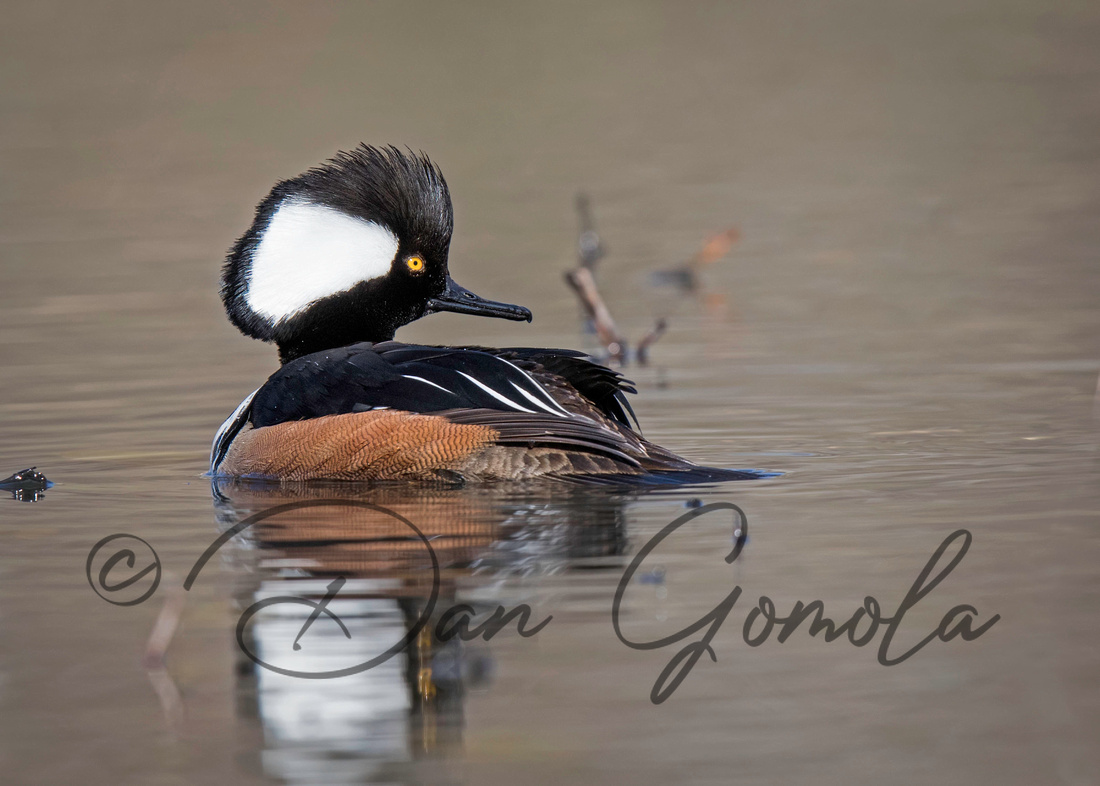 This little female Wood Duck landed very close to my blind.  She spun around quickly and watched my blind for about 10 seconds before taking off.  This photo was made as she began to open her wings to take flight. 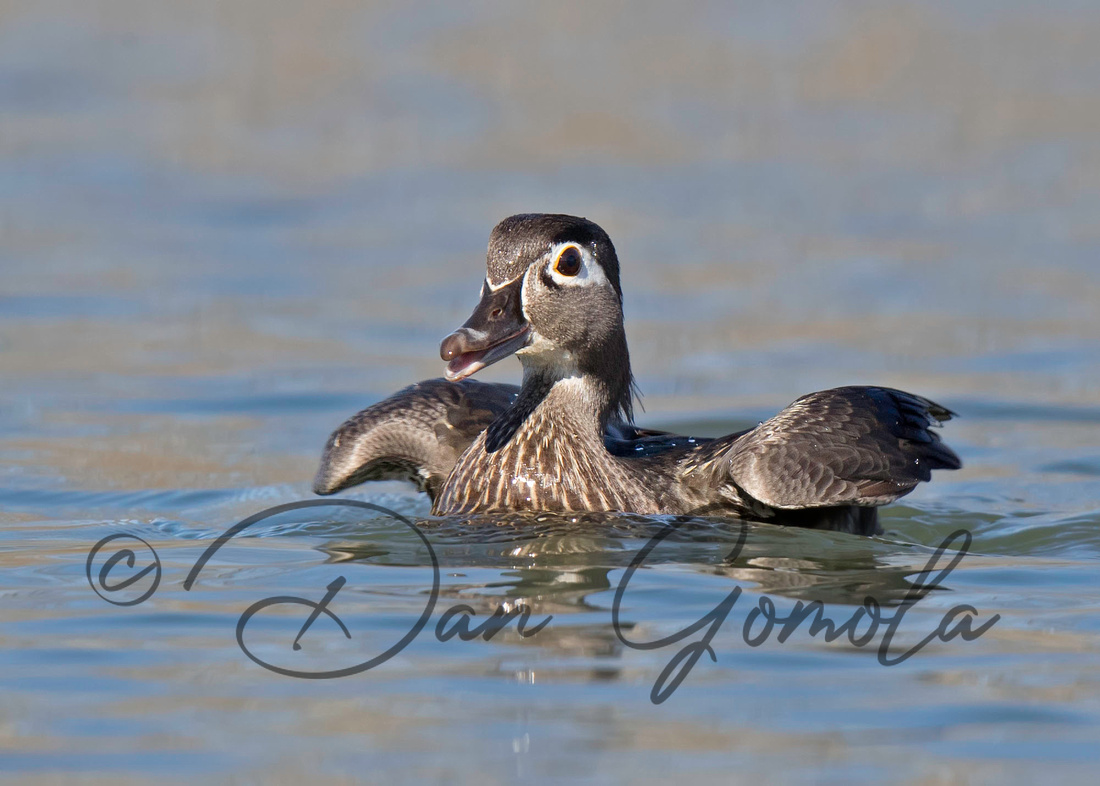 Marianne(non-registered)
Dan, these pictures are great. lobe them.. all of them
Linda Slone(non-registered)
Beautiful birds and as always your great comments and photos!
Juliette Hudon(non-registered)
Thanks for sharing those beautiful images with us. You really do a great job. I salute your patience, determination and, mostly, your love for the wildlife!
Donna Mohney(non-registered)
Made me feel like I was right there with you! Thanks for sharing!
Brenda(non-registered)
Love seeing these beautiful birds to start my morning, thanks for the shows, all of them
No comments posted.
Loading...
Subscribe
RSS
Recent Posts
Great Smoky Mountains 2022 Sometimes, I Like To Shoot Video For the Love of Whitetails Owl Encounters of Early 2021 Pennsylvania Magazine - Meet the Missus 2021 Elk Pre-Rut and Rut Encounters Great Smoky Mountains: My Cades Cove Experience (2021) - Part Three Great Smoky Mountains: My Cades Cove Experience (2021) - Part Two Great Smoky Mountains: My Cades Cove Experience (2021) - Part One Sandhill Crane: New Life in a Western Pennsylvania Wetland
Keywords
white-tailed deer Bald Eagle American Elk Benezette Common Yellowthroat Lake Arthur Moraine Great Blue Heron Wood Duck Wild Turkey
Archive
January February March April May June July August September October November December
©Dan Gomola
Powered by ZENFOLIO User Agreement
Cancel
Continue