Who Can't Find Wildlife in the Winter?

When winter comes there are certain birds and animals I like to search out and photograph.  Those subjects are usually the focus of their own photo blog.  Sometimes I find what I'm looking for and many times I don't but there is always wildlife found along the way.

In this photo blog I want to share some images I made since Christmas.  I hope you enjoy.

This little Black-capped Chickadee is picking at the fruit of a Staghorn Sumac. 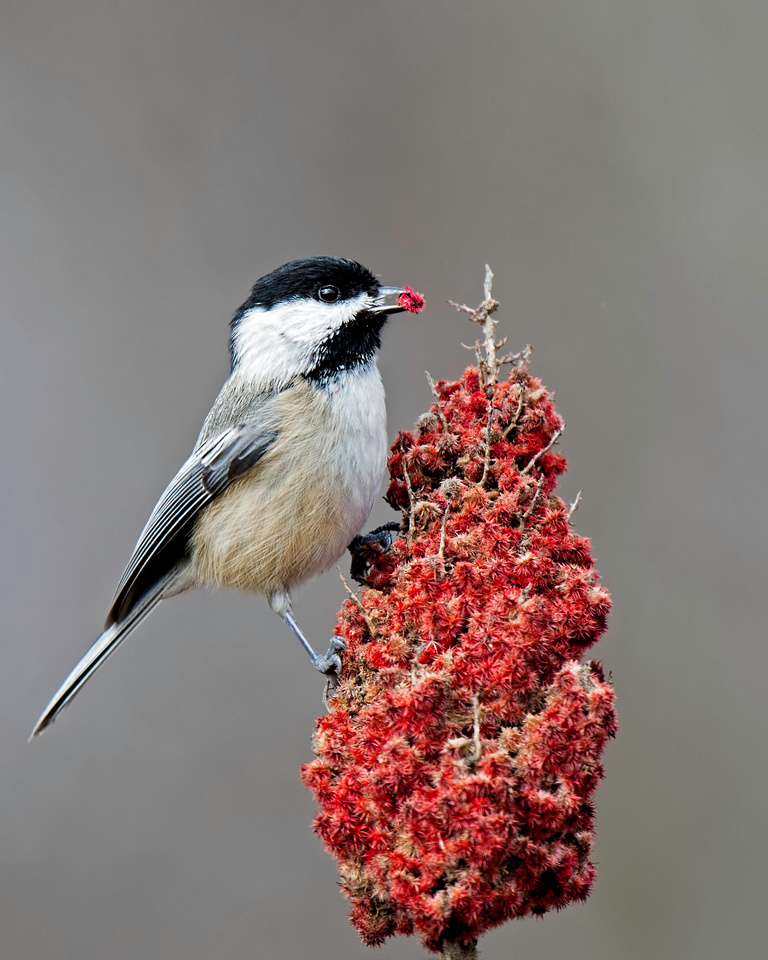 I made a trip to Erie, PA one day in hopes of finding a Snowy Owl on the beaches.  After the long walk to Gull Point, I was disappointed that there wasn't a Snowy Owl.  On a bright note, I found the largest gull in the world, the Great Black-backed Gull. 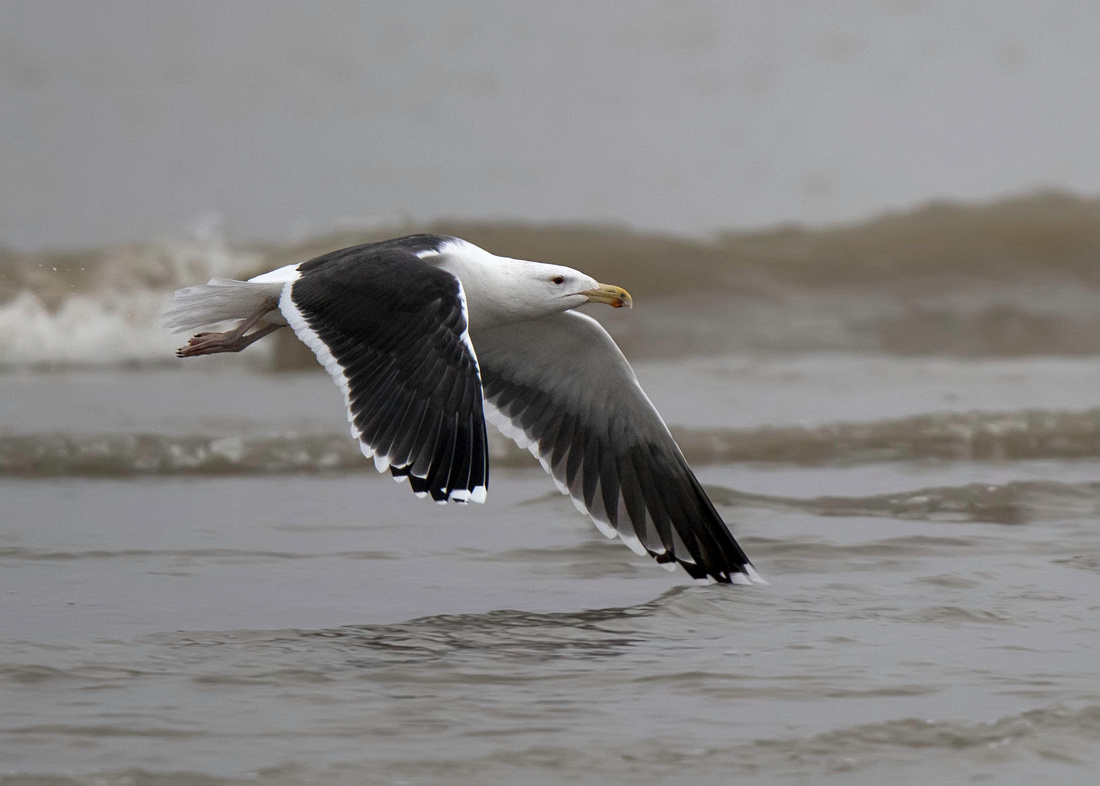 Ring-necked Pheasants love farming areas mixed with areas of taller vegetation, which they use for cover.  I've been finding this guy pretty regularly. 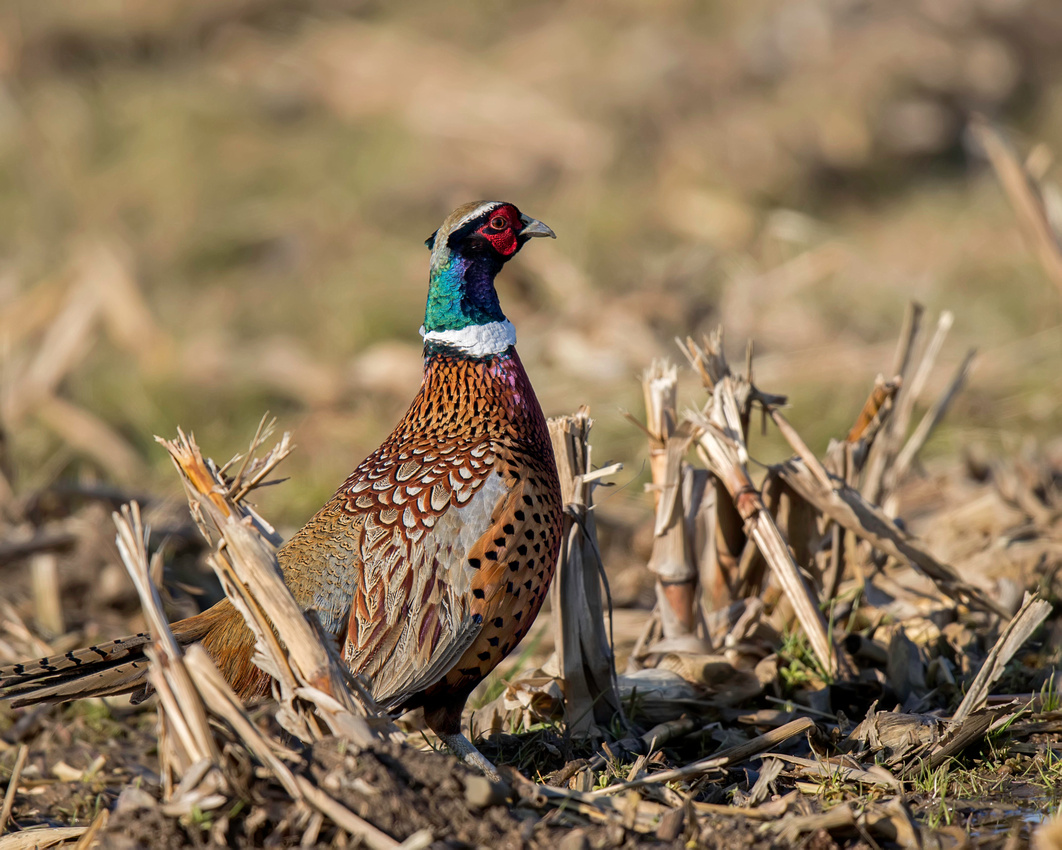 He was very alert as he fed in the corn field. 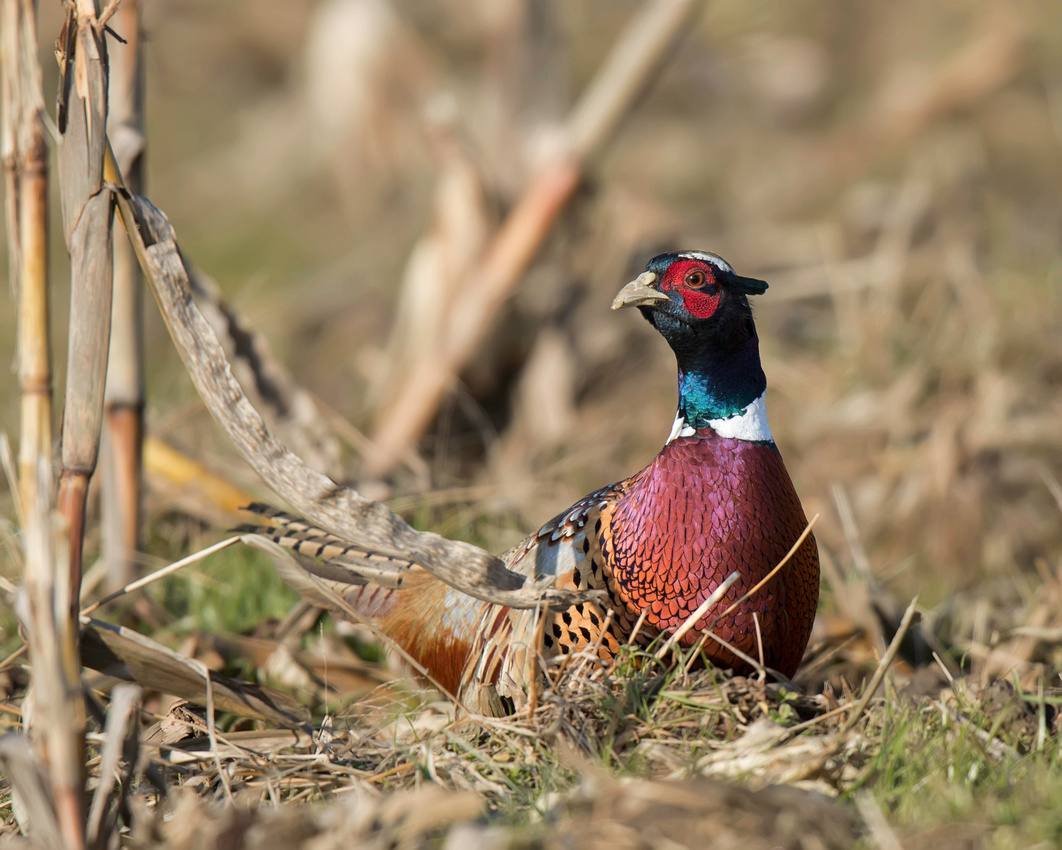 This video is almost six minutes long.  So, what in the world is so exciting about watching a Ring-necked Pheasant for six minutes?  You'll have to watch and see!  I'll give a hint: He must have heard another male pheasant in the adjacent brushy field.

Keep in mind throughout this video that I didn't know which way he was going to run so sometimes I couldn't keep up with him. It's comical to watch anyway.  Also, I didn't have my external microphone with me so the grinding noise you will hear is the focusing mechanism of the camera's lens.  One of my pet peeves about shooting video with a DSLR.

I found this Bald Eagle pair perched nearly 300 yards away.  It's amazing the detail, even at great distances, you can capture when there is good light. 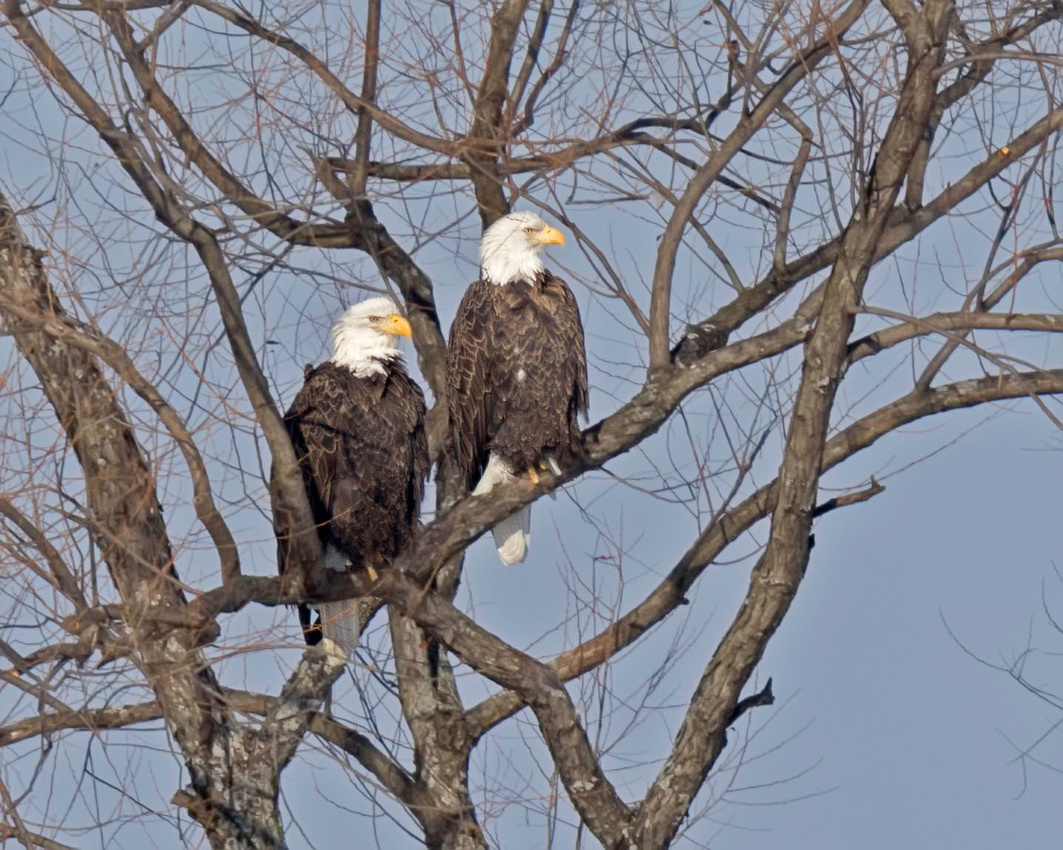 The following image doesn't have the best composition but I have to share it because it's my first ever photograph of a White-crowned Sparrow. 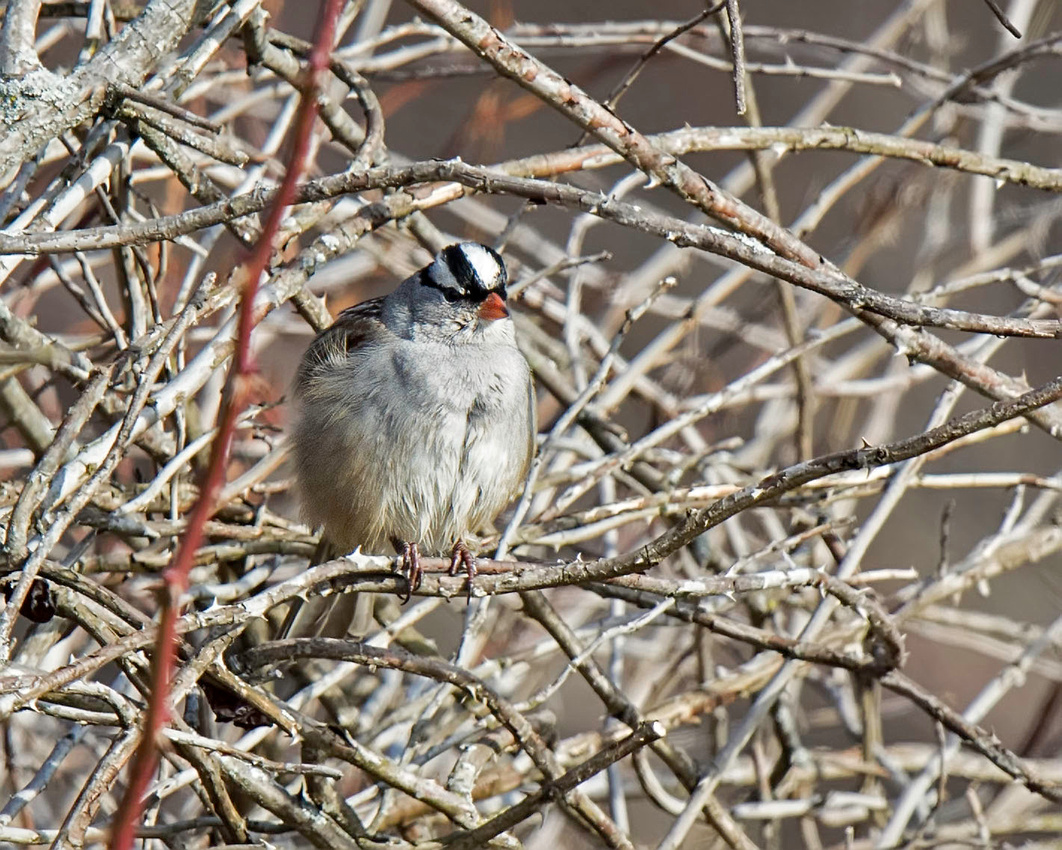 Horned Lark are my nemesis bird to photograph.  I find large flocks of them feeding in farm fields during the winter.  They especially like it when the farmers spread manure.  Of course, they fly when I approach.  I'll sit in my vehicle waiting for their return and they seldom do.  I'm just not having much luck with this bird.  One day, they did come close but they put themselves between me and the sun.  Not the best way to photograph anything but hey, I'll take it. 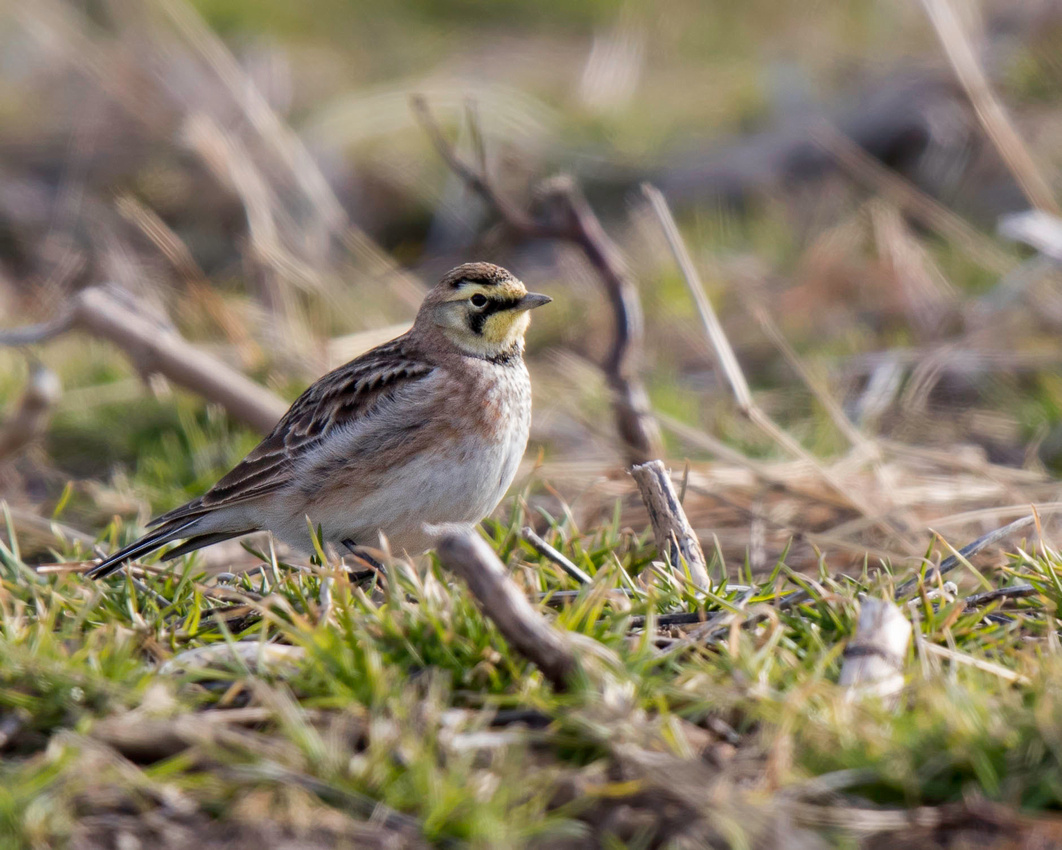 You can see the little tuft of feathers on its head that makes it look like it has horns.  Hence, Horned Lark! 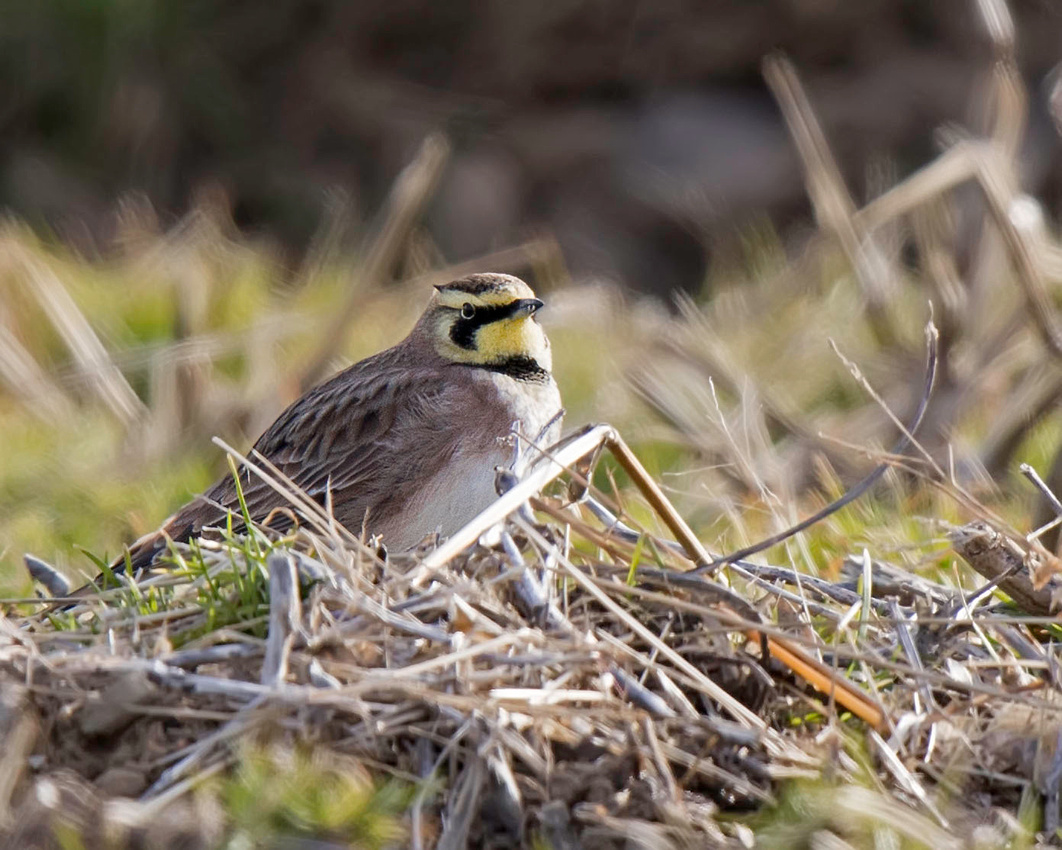 I'm going to finish this photo blog with a Sandhill Crane show.  I made all of the following photographs of two separate flocks in one evening.  As I processed the images, I discovered I had several unique images so I'm including them all here for you to see. 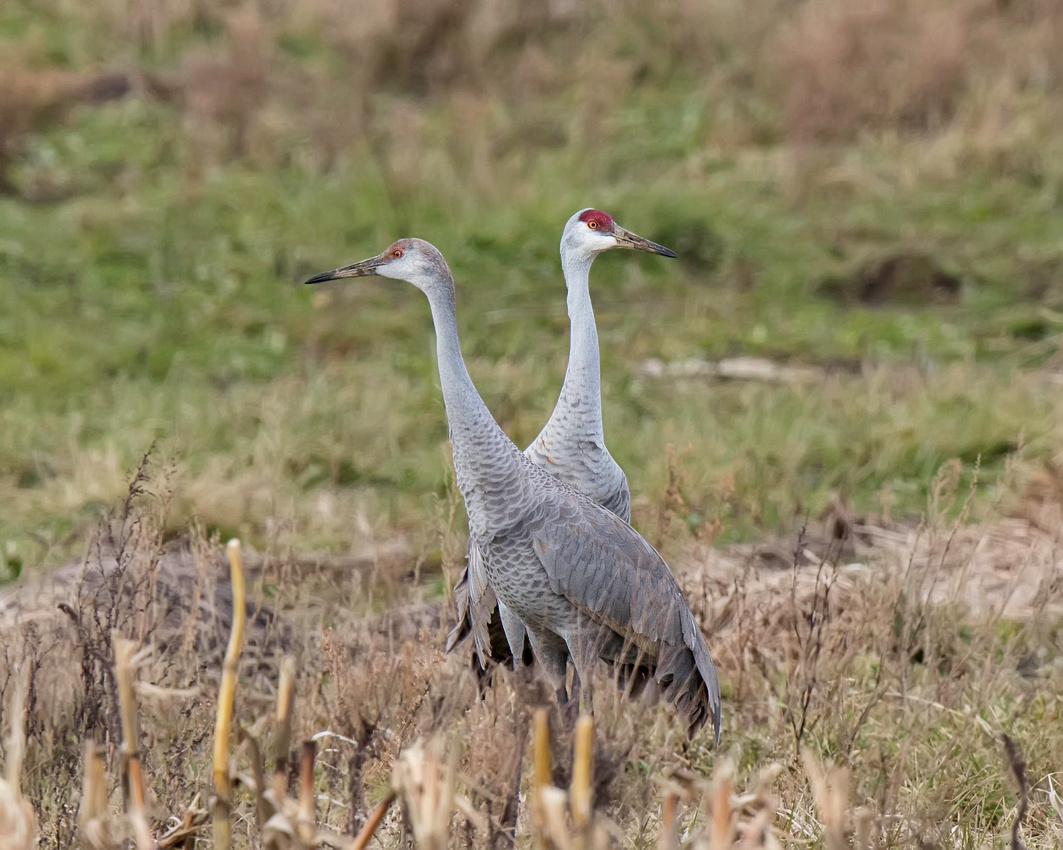 This photo was made during a little fluffing of the feathers. 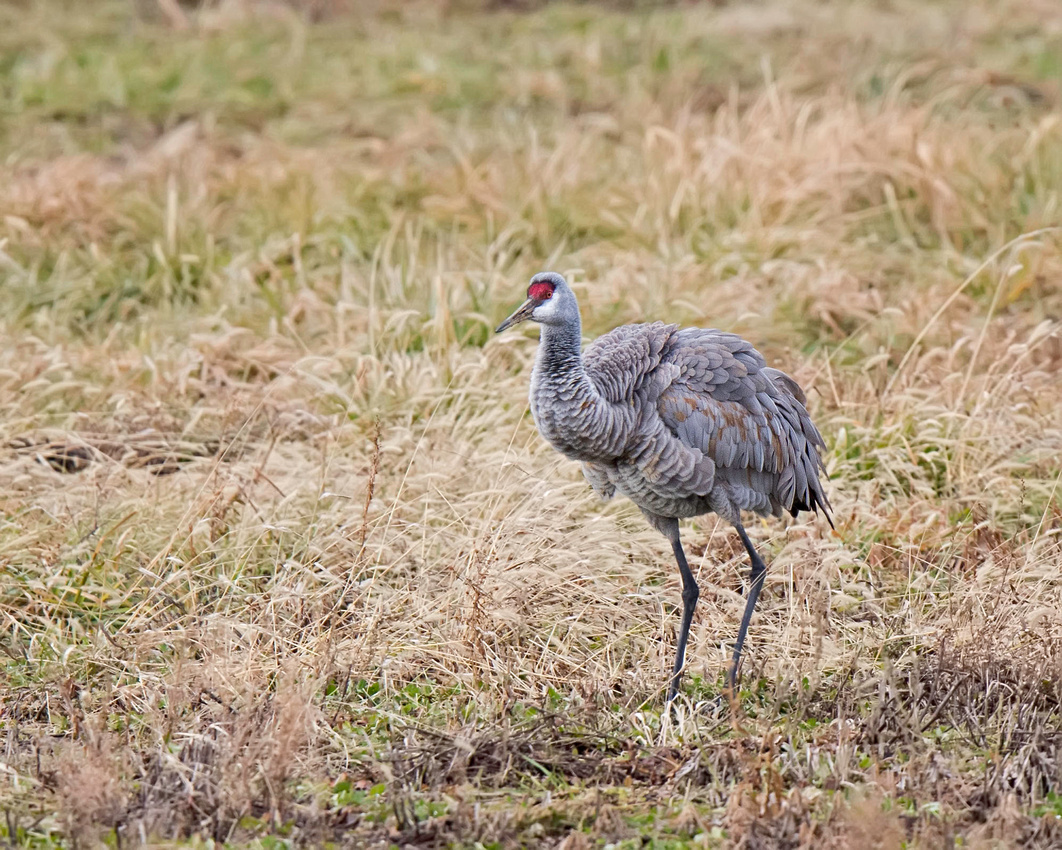 A lone walker slips away from the flock. 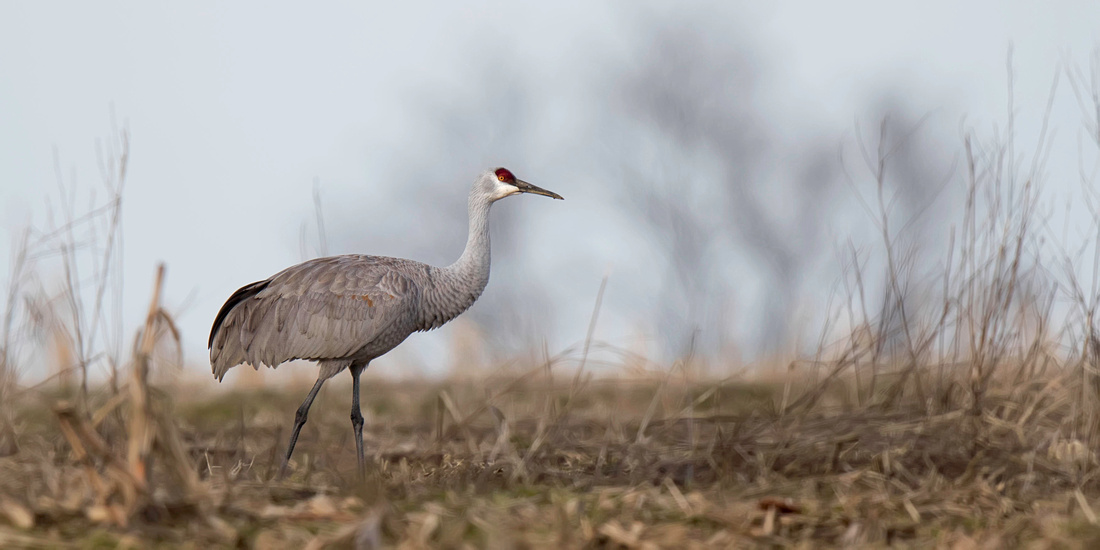 These two were walking together but feeding on their own sides of the imaginary line. 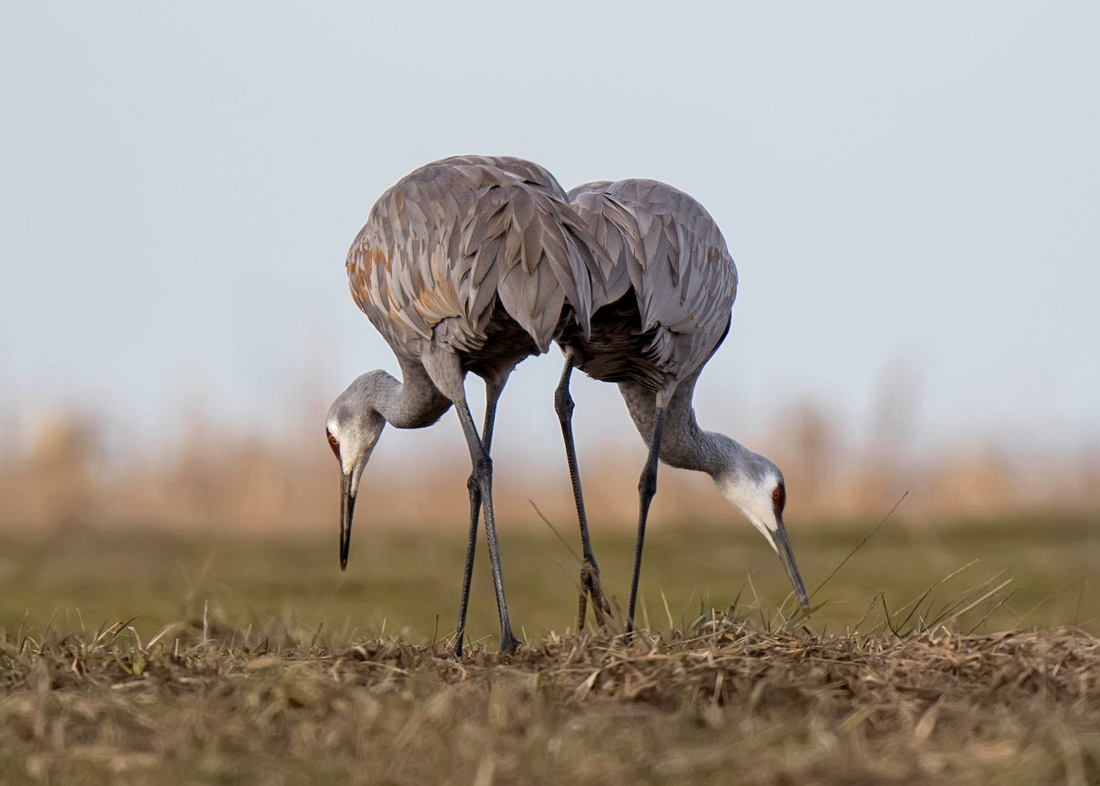 As I watched this small gathering of cranes, another flock flew past and landed on the other side of the hill.  They got the attention of all but one of the group in front of me. 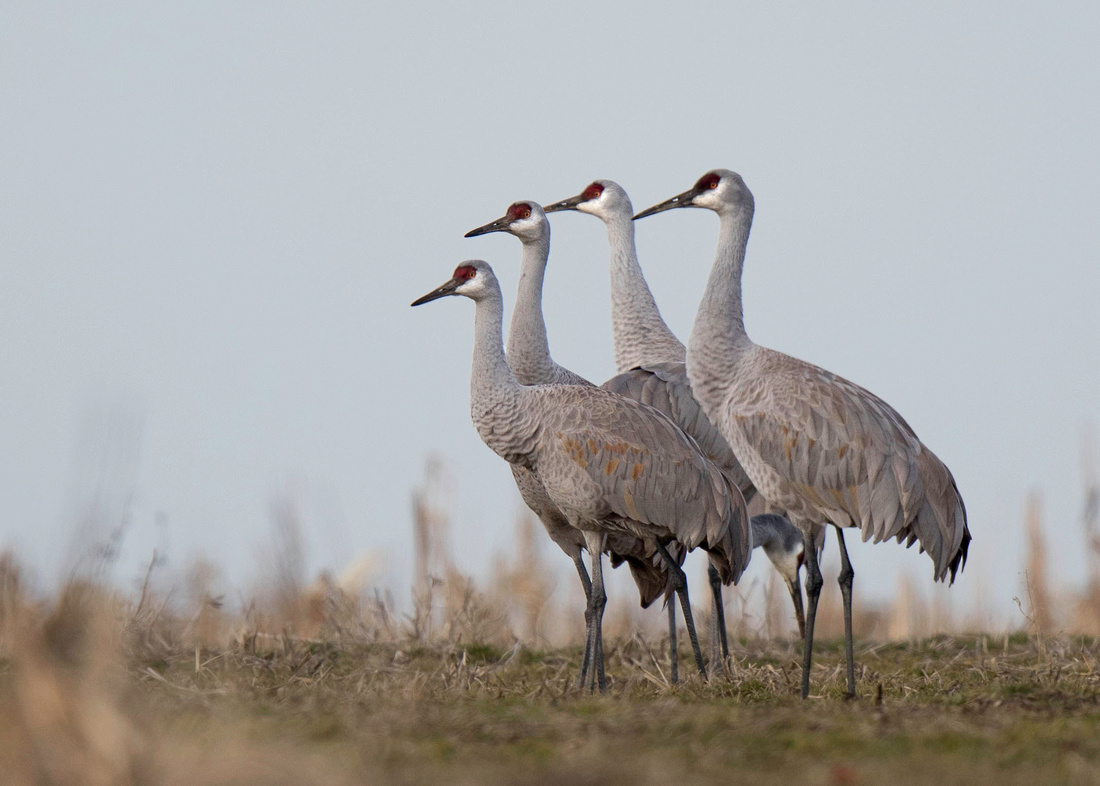 A little preening never hurt anyone.

This Sandhill Crane stood with its legs crossed for several minutes.

This image is one of my favorites. 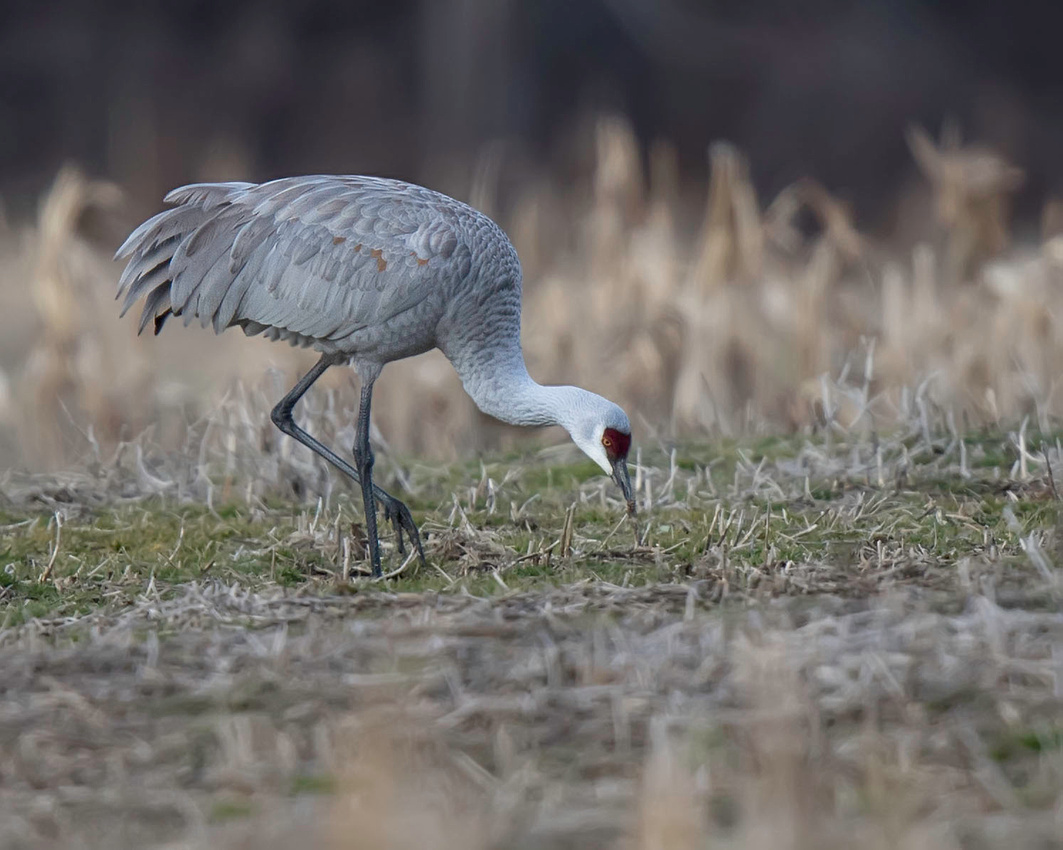 Just like clockwork, as the sun is setting the Sandhill Crane becomes restless and take off to wherever they are going to roost that night. 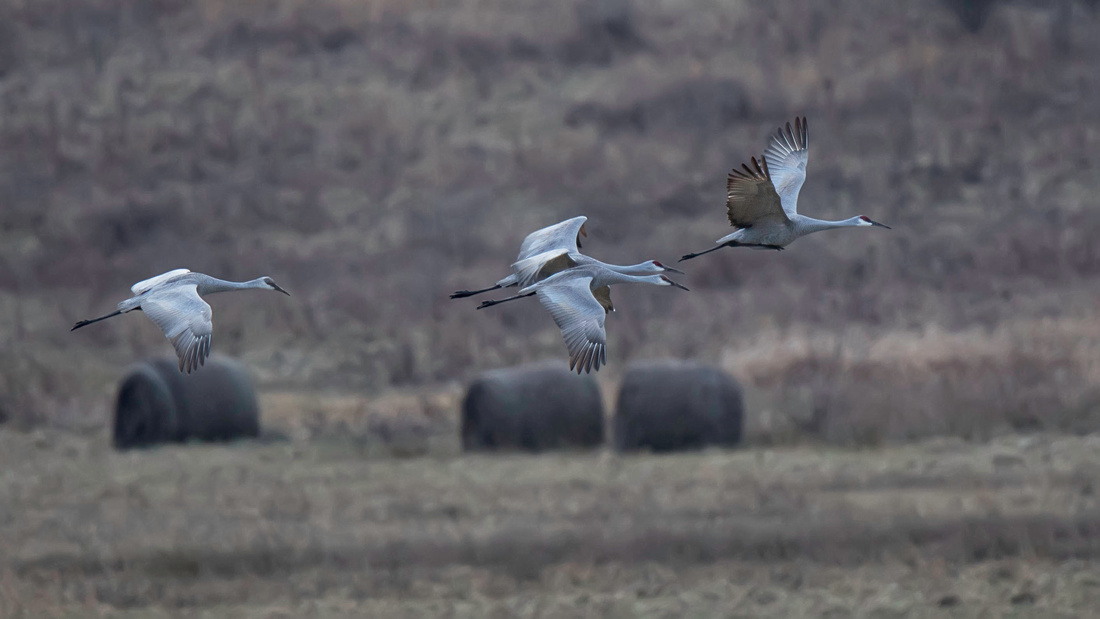 I hope you enjoyed this photo blog.  I am currently photographing for a photo blog documenting Short-eared Owls.  I'm focusing on their stay in Pennsylvania and hopefully some other information that may be new to you.