According to the calendar, autumn has arrived.  If you’ve walked outside of your northeast home lately, you’ve noticed it still feels like August.  With temperatures in the 80’s, we humans make the appropriate adjustments to enjoy the prolonged “summer”.  Wildlife and nature, on the other hand, keeps doing what it does in October.

Goldenrod is in bloom, Pokeweed berries are ripening, many wildflowers turned to seed, the sweet and bitter fruits and nuts are ripening into nutrition to be eaten and cached by wildlife, and finally, the deep greens of our summer foliage has begun to turn into yellow and red hues across our landscape.

I have been consumed with Elk, White-tailed Deer, and fall songbird migration photography lately but in the process, there are always special moments and sights to capture in my camera.  This photo blog is a compilation of photos and a short video displaying wildlife and nature seen during my time “in the field” the last couple months.

I hope you enjoy these late summer photographs such as this Gray Catbird perched in the, yet-to-ripen, Pokeweed plant. 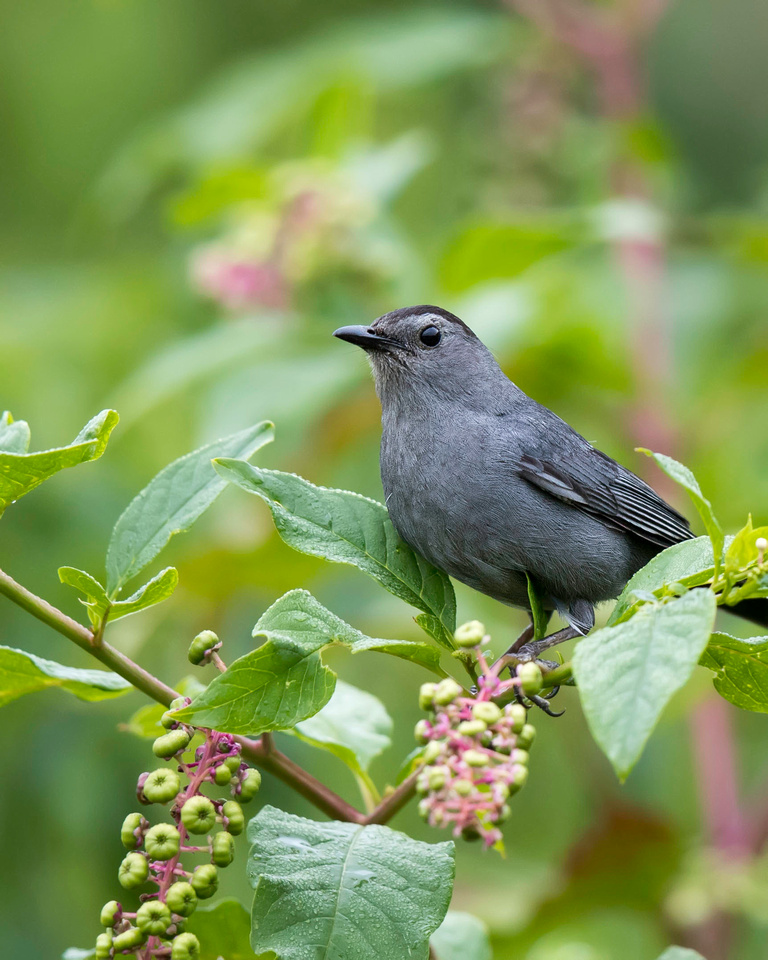 The setting sun is like a spotlight on the thin ears of the Cottontail Rabbit. 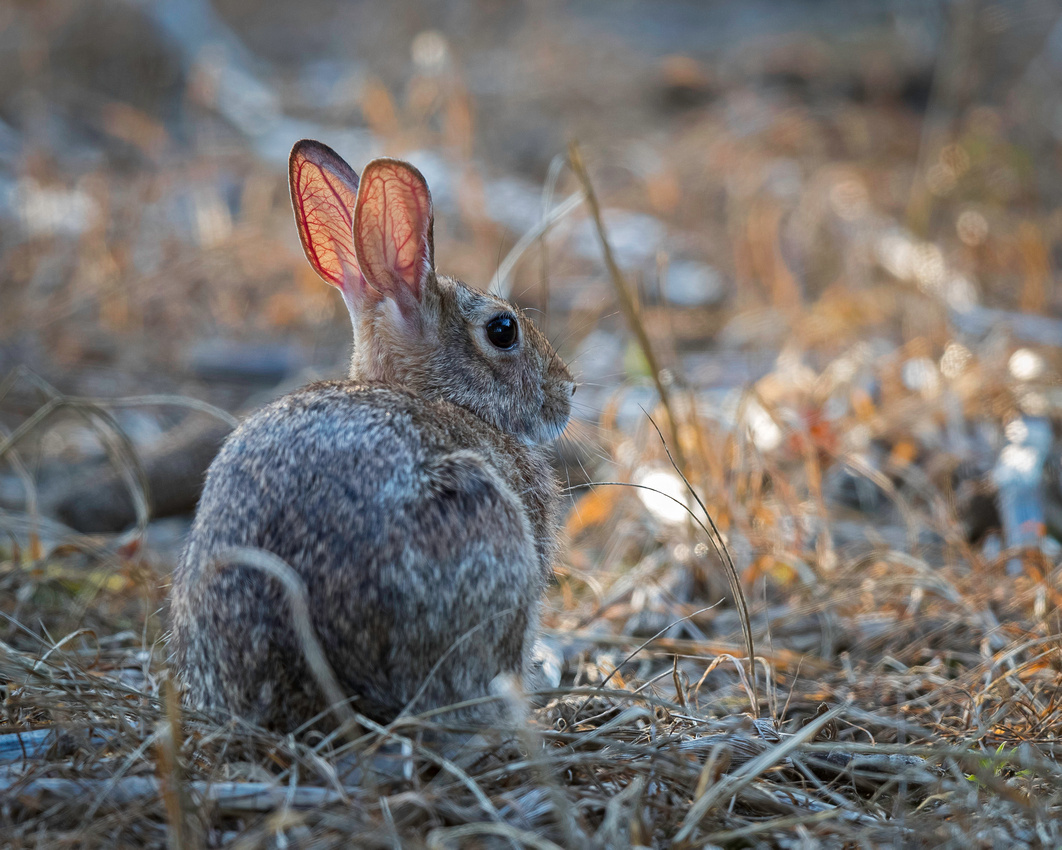 When we bought this property 20 years ago, I was happy to find it is in the middle of several Eastern Black Walnut trees.  Yes, they are messy but I don't have to pick up the fallen fruit.  My yard is a popular place in the fall when all the neighborhood Gray Squirrels come to gather nuts. I put down lime on certain parts of my lawn to reduce the acidity from the husks the squirrels leave behind.  Keeping the trees is the least I can do to help them through the winter. 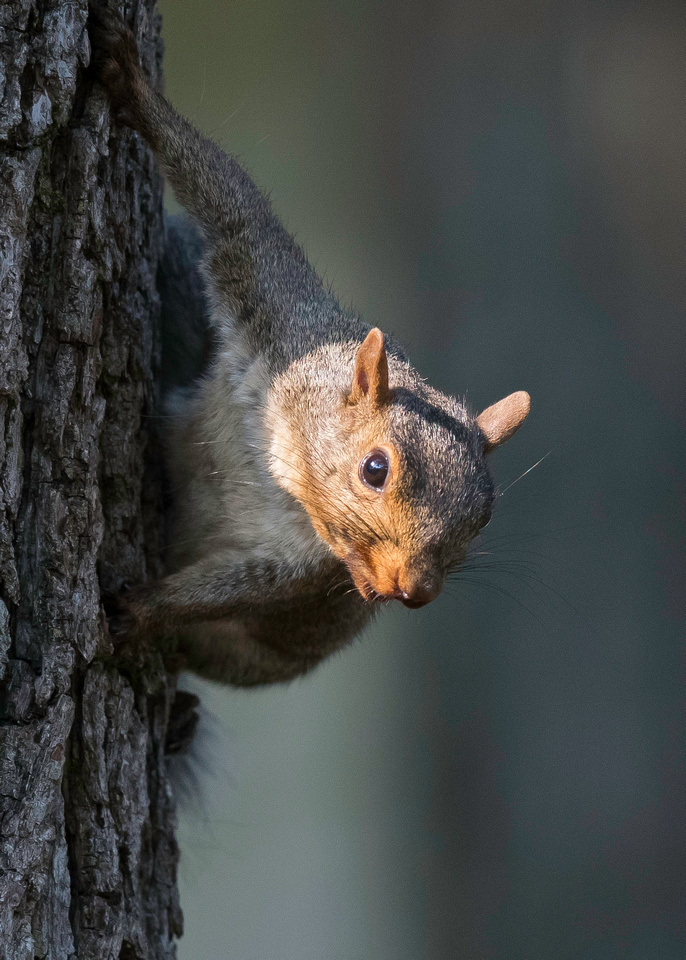 This bird nesting box has been empty for several months now but this Tufted Titmouse had to check if anyone was home. 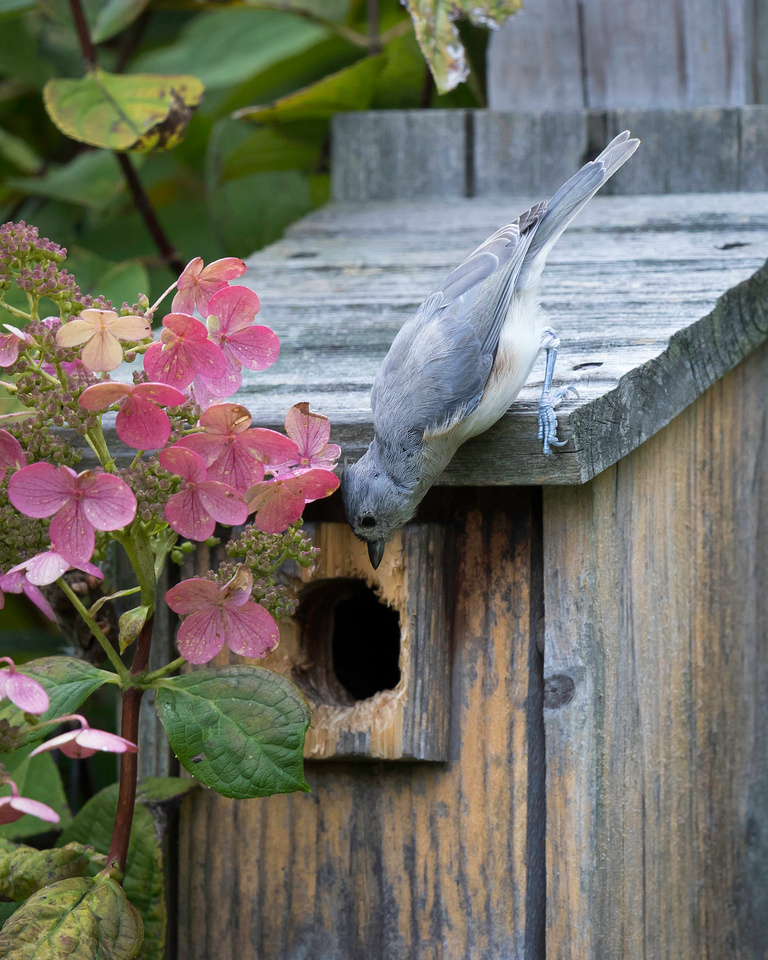 Elena and I were in Benezette for a long weekend to photograph the Elk rut.  It happened to be during a hot and dry stretch of weather.  It affected photography of the rut because the heat would force the elk into the woods earlier in the morning and keep them in there longer in the evening.  It wasn't a great weekend for elk photography but I did grab a few interesting shots of other topics.

Here is a Cedar Waxwing perched on a Pokeweed plant. 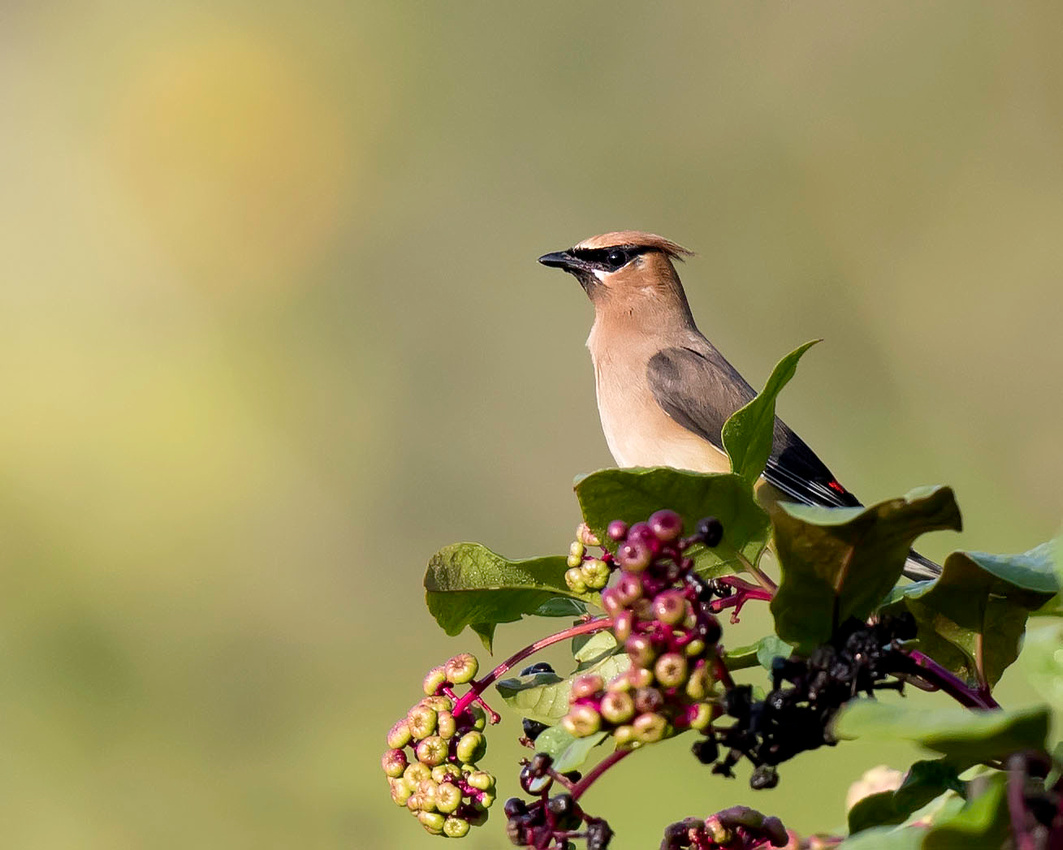 If you've ever been to Benezette, or any mountainous area for that matter, you will realize that the morning usually greets you with heavy fog.  Of course, fog leaves behind dew.

When the sun finally emerged this one morning in Benezette, we were greeted by several hundred dew drenched spider webs glistening in the fields.

Below is a photograph of a Banded Garden Spider and an interesting tidbit I found about web construction from the Department of Entomology at Penn State University.

"A behavioral study of web construction determined that the majority of Argiope trifasciata orient their webs along an east-to-west axis. The spiders hang head-down in the center of the web with their abdomens facing south. Since the underside (venter) of the spider is mostly black, the orientation of both web and spider is believed to maximize solar radiation for heat gain—an important consideration for spiders that are active late in the year." 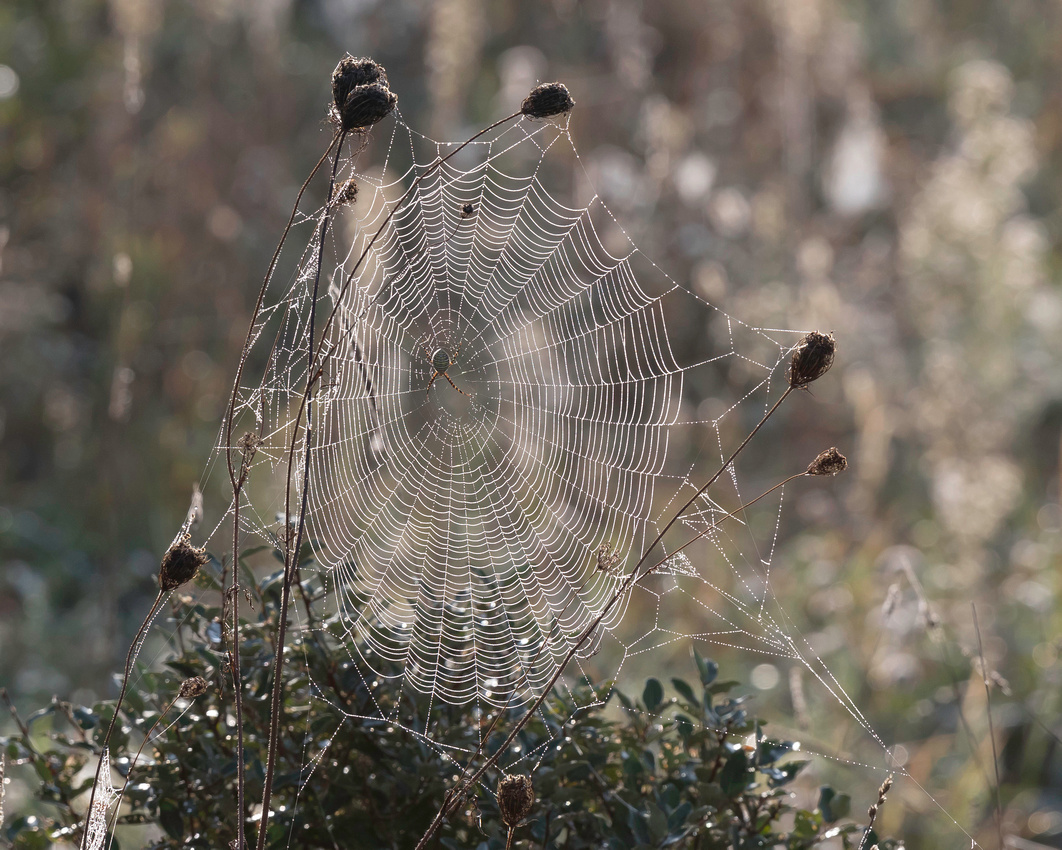 Waiting for elk to emerge in the evening can be a snoozefest if you let it happen.  Instead, I watched several Monarch butterflies visiting the flowering Goldenrod that dappled the landscape.  The journey in front of this butterfly is amazing when you think about it.  The monarch is this large-winged insect that weighs 1/2 gram or less and seems to be at the mercy of whichever way the wind is blowing.  The journey it is on will take him to the final destination of Mexico or southern California where it is warm year round.

If the monarch lives in the eastern states east of the Rocky Mountains, like this one, it will migrate to Mexico and hibernate in Oyamel Fir trees. 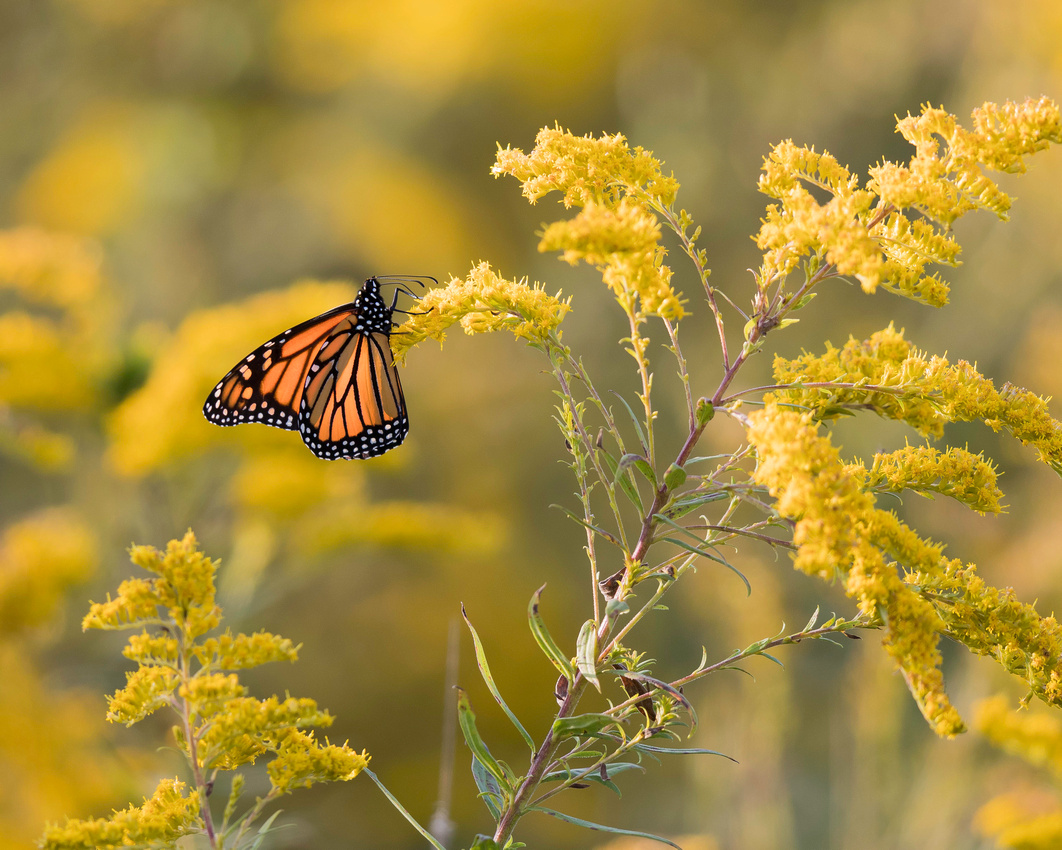 On one of my more productive elk visits to Benezette I got to spend the day with my good friend Tom Dorsey, who lives in that region of the state.  After spending a very good morning with the elk, Tom took me on a tour of many of the back roads through the mountains and Elk State Forest.  Once Tom drove us out of the area I am familiar with, I had no idea where I was.  By the way, I keep mentioning elk with no photos.  The elk photos will be in an upcoming blog about my experiences during the 2017 elk rut.

Close to the end of my tour, Tom took me to a place called Shaggers Inn Pond.  It is tucked away in the forest of Clearfield County.  We spent about an hour there watching the birds including a Bald Eagle all the way down in size to fall songbirds chirping in the bushes. 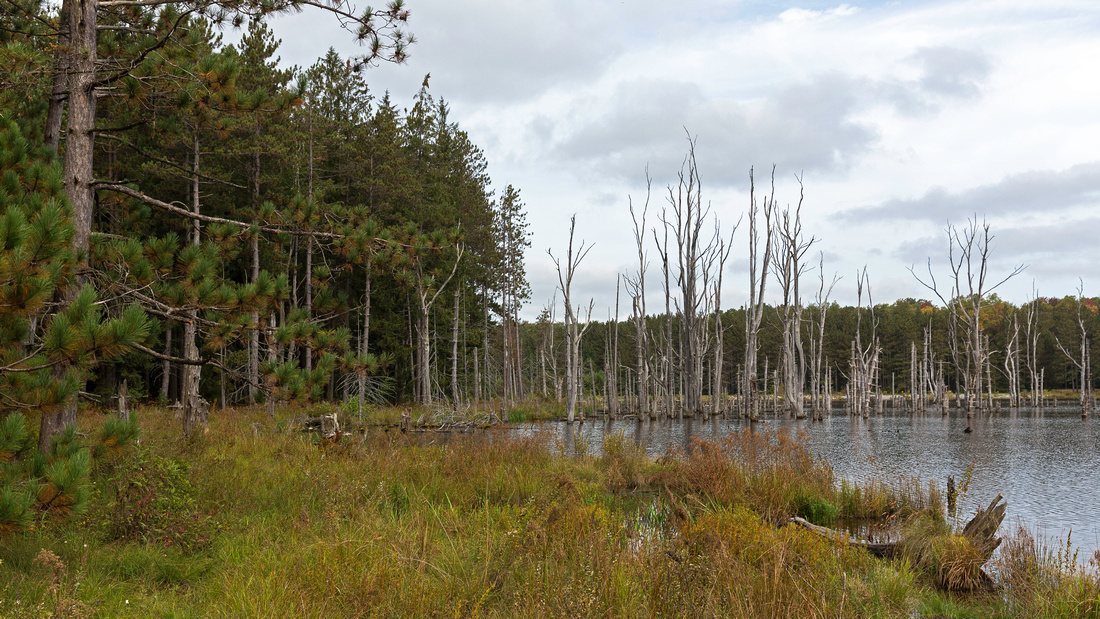 Back in western Pennsylvania, wildlife photography opportunities continue.  One day, I spotted a few Wild Turkey and several of their poults (babies).  The field grasses were too high to photograph the poults so here is one of the adults. 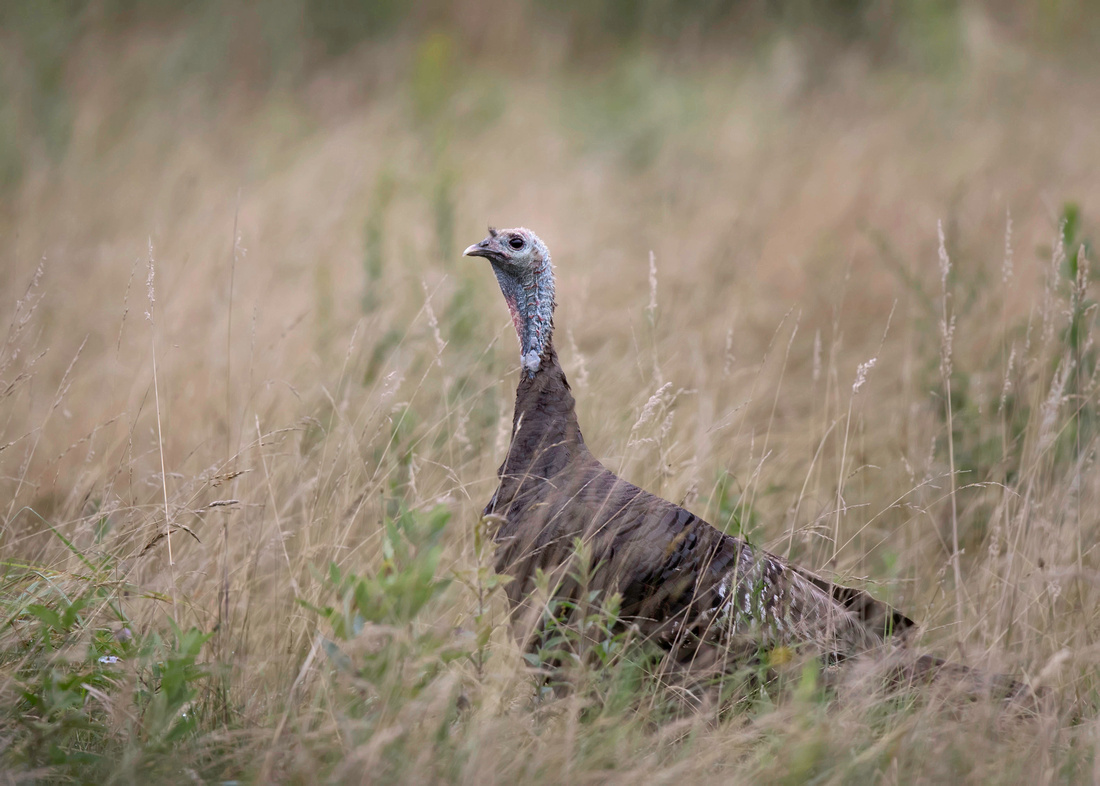 One day, while photographing birds in my back yard, I saw this Gray Squirrel sitting in the fork of a tree gnawing the husk from the fruit of one of my Eastern Black Walnut trees. 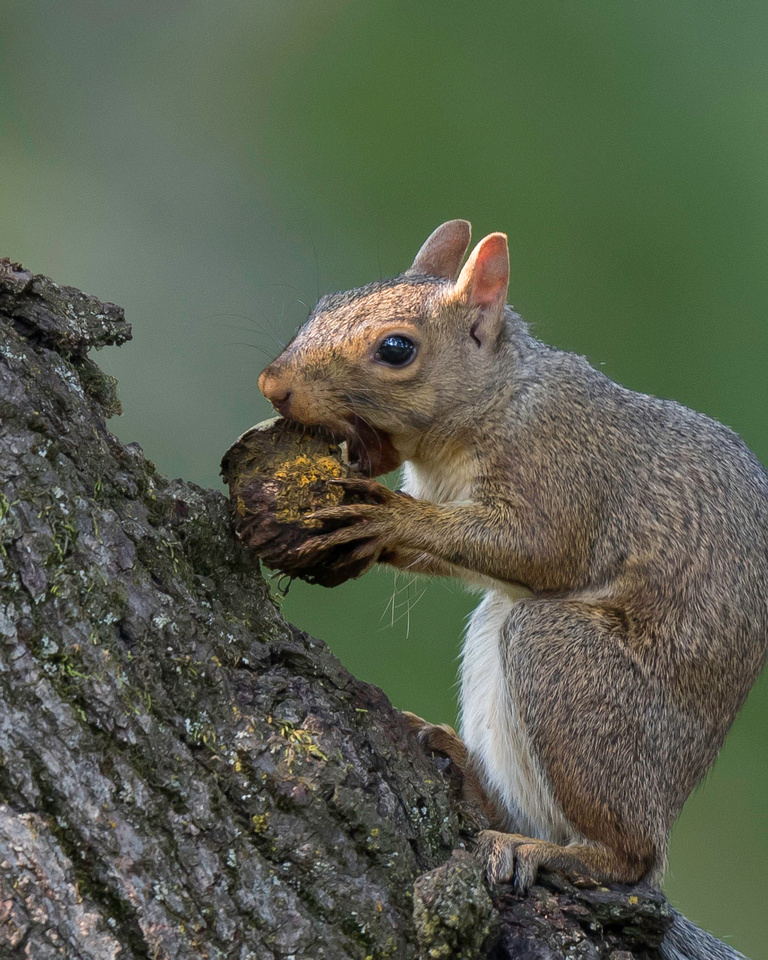 I have a trail cam that I move around my backyard to see how my bird feeders get emptied over night and see what might be coming in to get a drink or bath at the fish pond.  All summer, I've had two Raccoons visit now and then.  So far, my fish have been safe.  One morning, I noticed one of the Raccoons in a large, hollow maple tree that was here long before we were.  It was very early in the morning and I think he was ready for a day of napping. 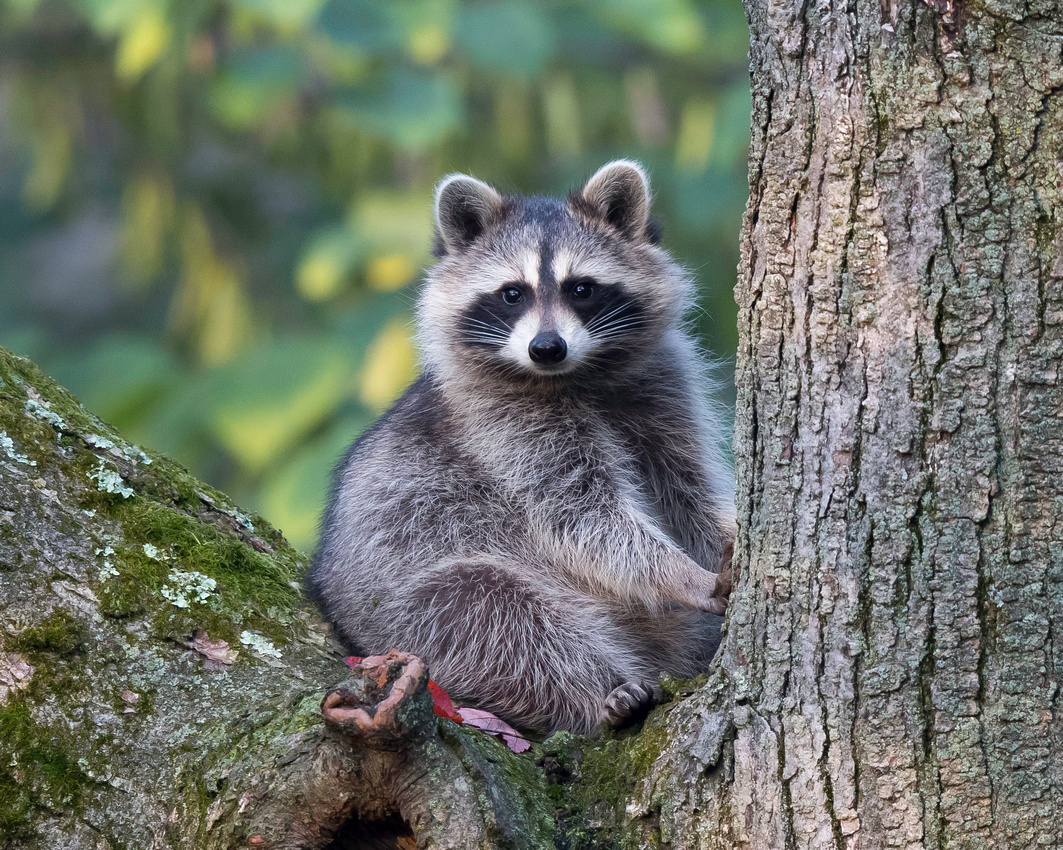 He found a spot to relax. 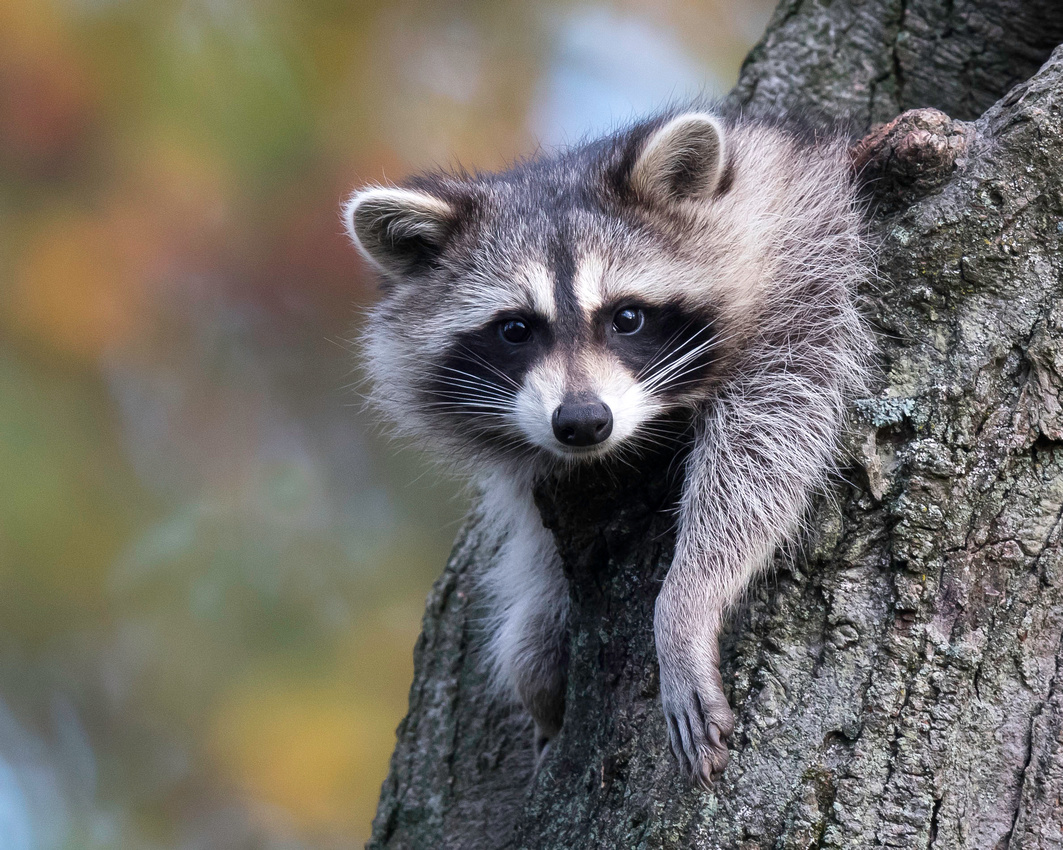 I'd like to share a short video of clips made in my backyard.  I love to watch the American Goldfinsh pulling seeds from the dried Echinacea flower. Also in the video is the Gray Squirrel peeling the husk from a walnut you saw earlier in this blog.  And, of course, I have to share video of the Raccoon in the tree.

One evening my friend, Jake Dingel, and I went out looking for White-tailed Deer.  We were hoping to find them in the process of shedding their velvet.  On our way past a marsh, we spotted a Green Heron perched on a stump in the water.  We stopped and photographed the bird. 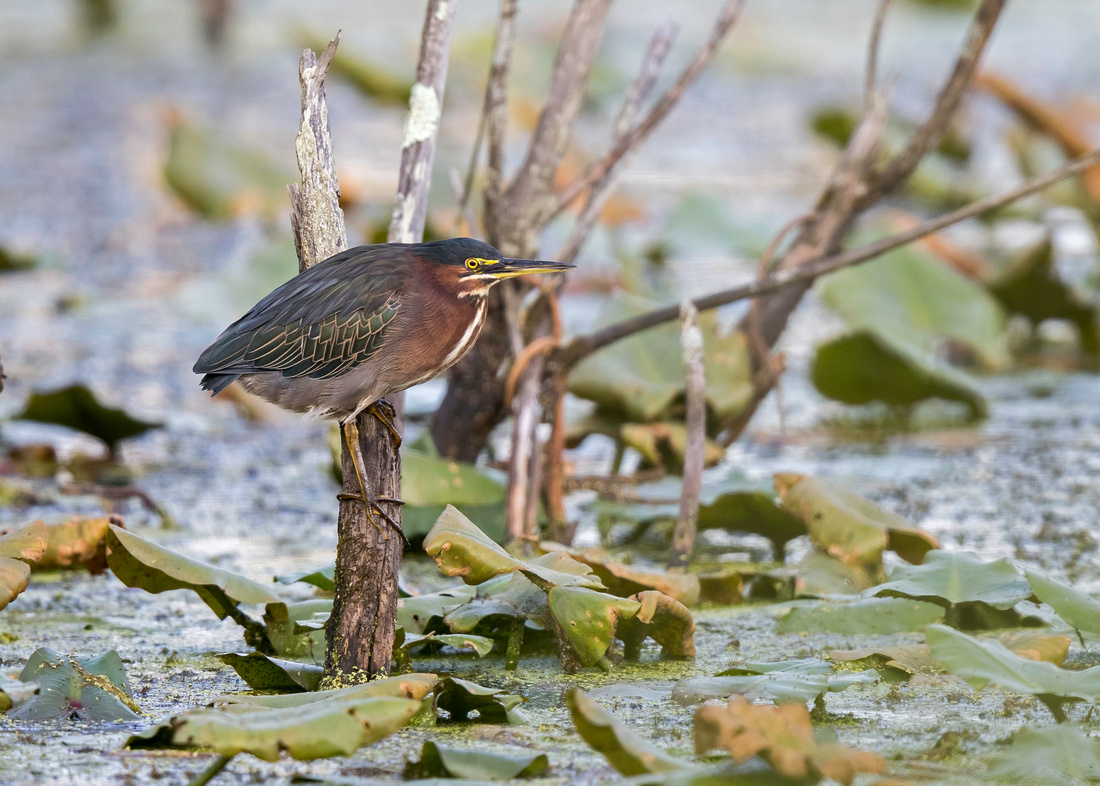 The heron caught me off guard when he lunged to make a catch and I didn't get any photos worth sharing.  This photo was after he returned to the stump with a small frog. 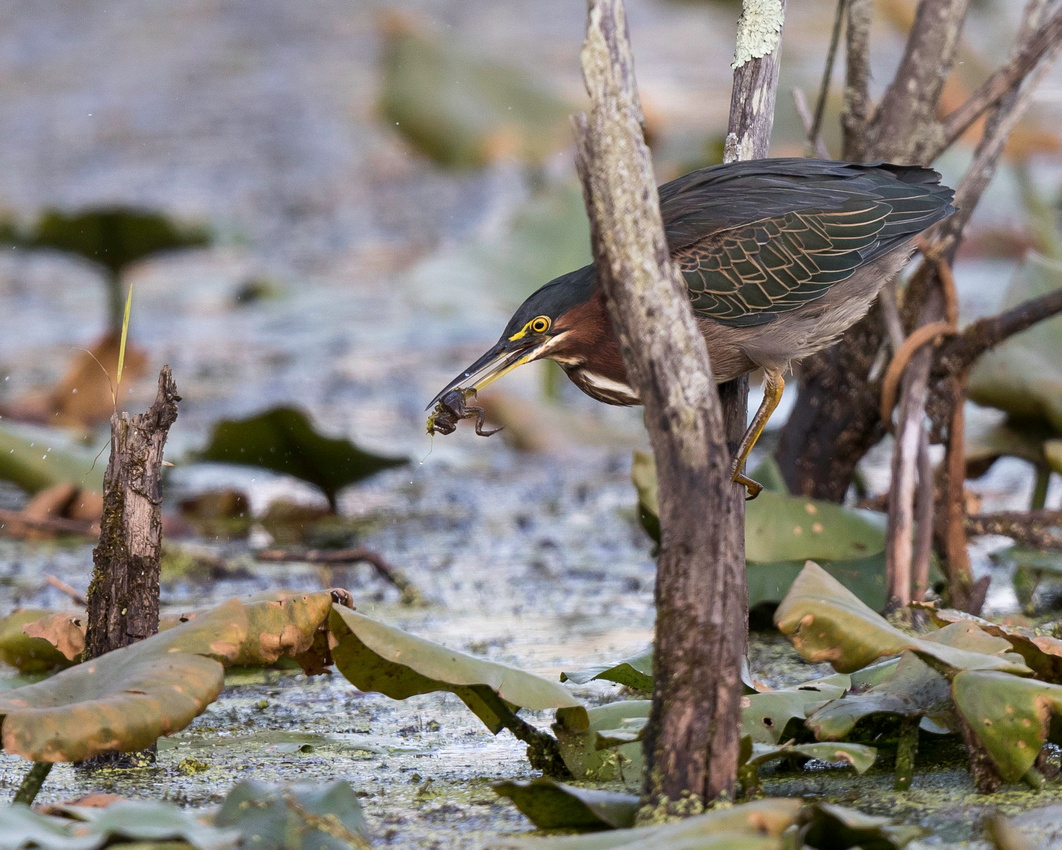 I wish I had my macro lens instead of only the 600mm when I saw this Praying Mantis.  It could be a little sharper but it is still worth sharing. 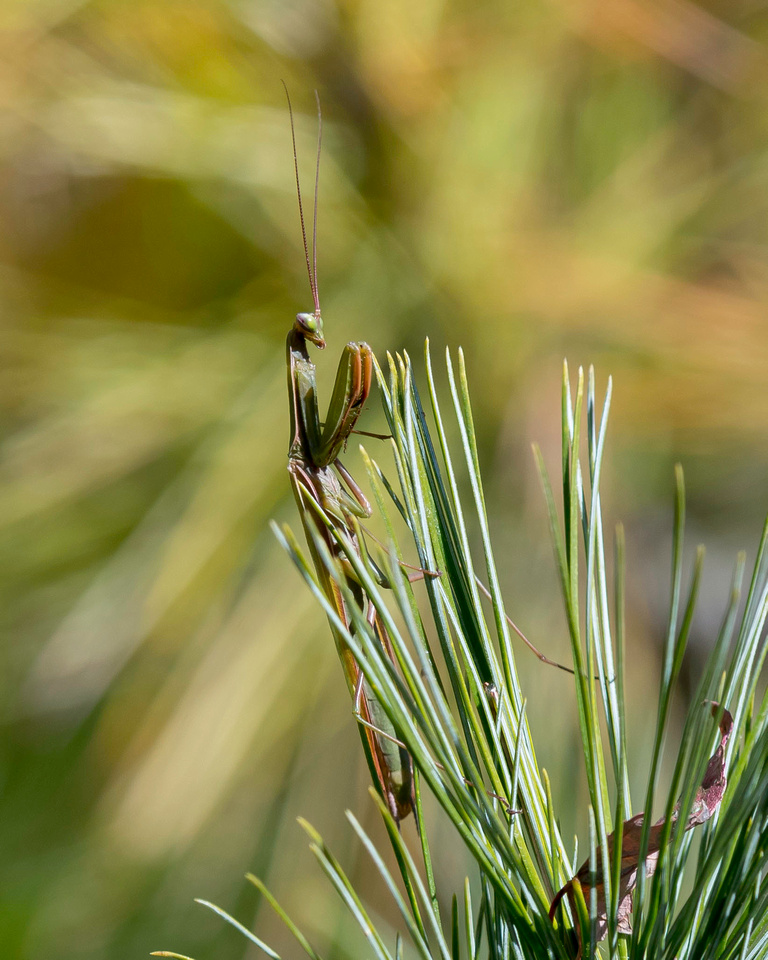 One Saturday morning, after reports of a rare Sabine's Gull being seen at a lake about an hour away in Clarion County, Elena and I decided to go see the bird.  Unfortunately, the day before was the last time it was seen as it continued on its migration.

During our wait at the lake, we spotted several fall warblers that I will share in an upcoming photo blog.  We also got to watch this Osprey dive into the water and retrieve a fish.  Unfortunately, the wind was blowing into our face and since birds land, take off, and fish into the wind, its back was toward us the whole time.  The only photos I have to share are after the catch, like the one below. 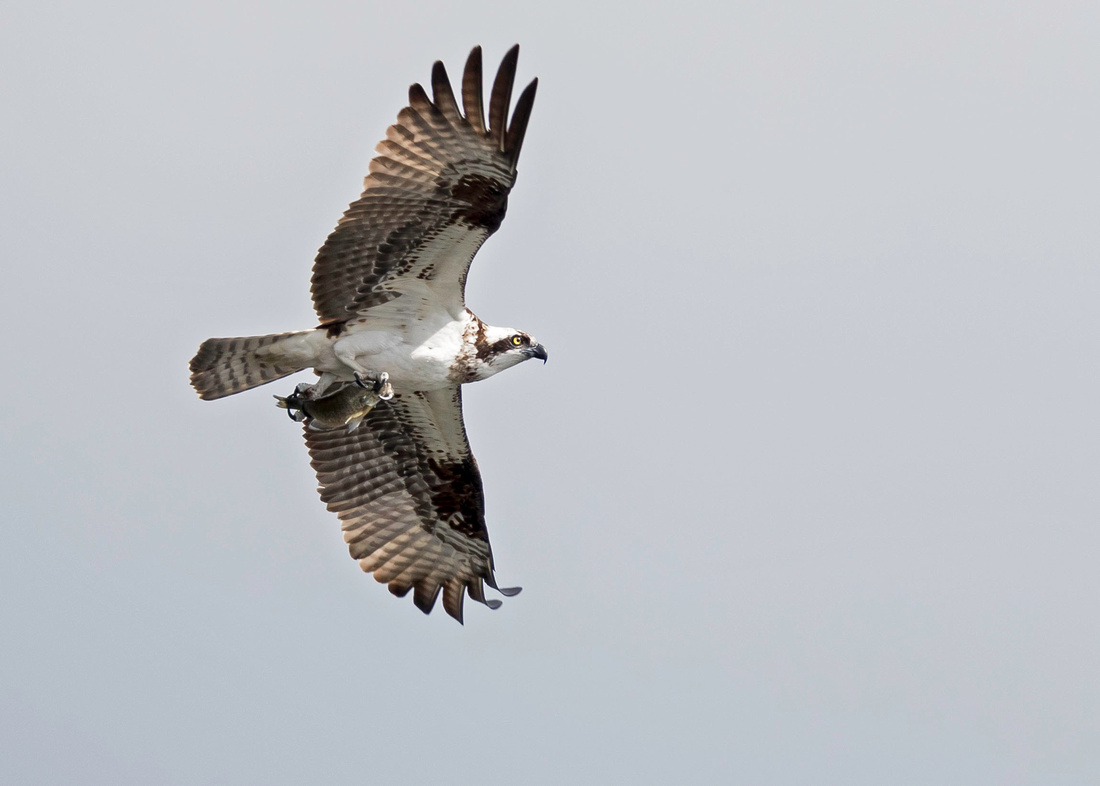 That's all for now.  I hope you enjoyed this series of photos.  Soon I will be sharing photos of White-tailed Deer and the American Elk herd in Pennsylvania. I hope you check back soon.