A late August or early September visit to elk country in north central Pennsylvania can offer many stages of changes for an American Elk.  The calves have grown but are far from the size of their moms, the bulls have begun to shed the velvet that covered their antlers all summer, and bull elk are still roaming in bachelor groups.  Bulls begin to feel the effects of the increasing testosterone in their bodies as the upcoming mating season approaches.

Scenes like the one below are common in August and early September.  One second they are eating together and the next they may have their heads down in playful jousting with their new set of hardened bone on their head. 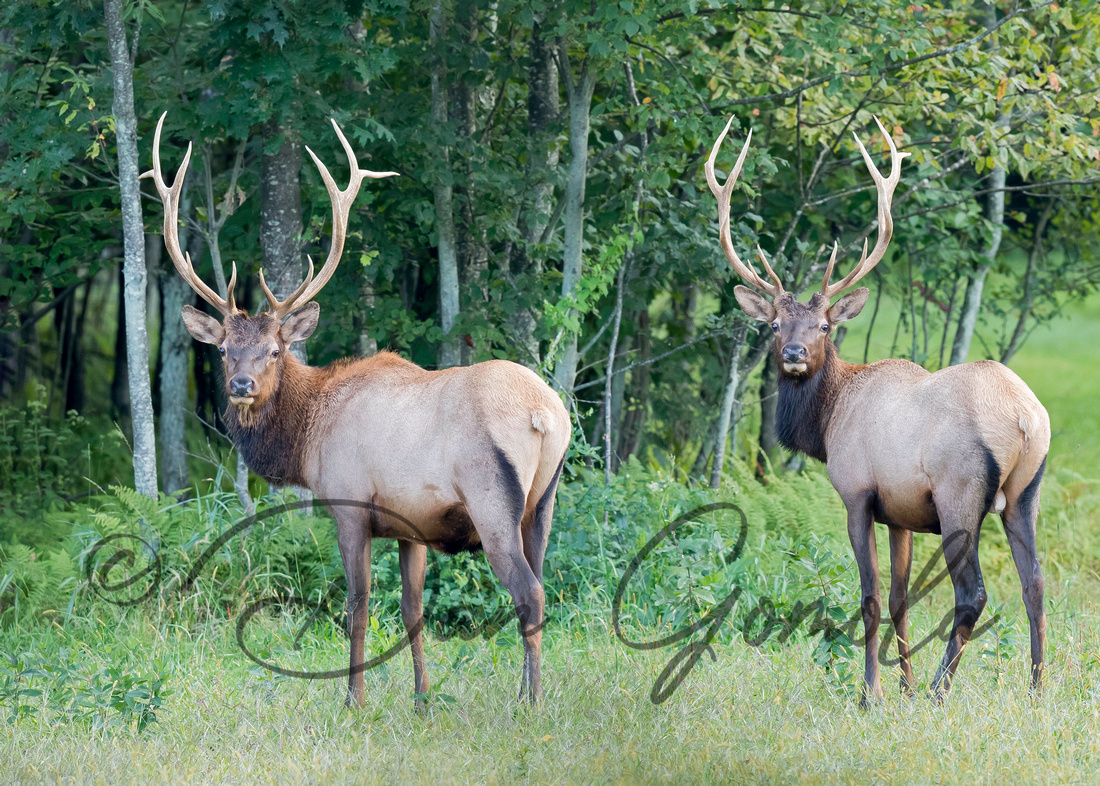 Fast forward a mere three weeks and the scenes are completely different.  As the cow elk begin their estrus cycle indicating they are ready to mate, the bulls are preparing themselves for a stressful, yet weary month.  The sap of young trees have polished their racks, giving them that dark chocolate color and their chest and neck area has transformed into a thick mass prepared to aggressively defend their herd, and they become very vocal.  The sound of their bugle has a couple purposes.  It helps the elk cows decide which bull they want to be with and it staves off other bulls that may have a notion to steal members of the others' herd.

This bull came out of the thicket ready for a challenge.

This years' rut was very different from many previous years.  The eastern United States was enjoying a very hot late September making people wish they had not closed their pools for the season.  Photographers in elk country were cursing the heat because it affected the photo opportunities during what would be the most active time of the elk rut.  Elk, like the White-tailed Deer, are crepuscular animals. Crepuscular animals are active primarily during the periods of dawn and dusk.  Heat does not necessarily affect when the elk cow enters her estrus cycle, but it does affect the time they spend out of the deep woods where they spend the day resting.

I visited the Benezette area on a Tuesday, only days before the warm front entered the area.  It turned out to be the only day for me that elk photography was not disappointing.  This next photo was made only seconds after the bull from the previous photo ended a chase.  Although they were still far up the hill, he made me a little nervous. 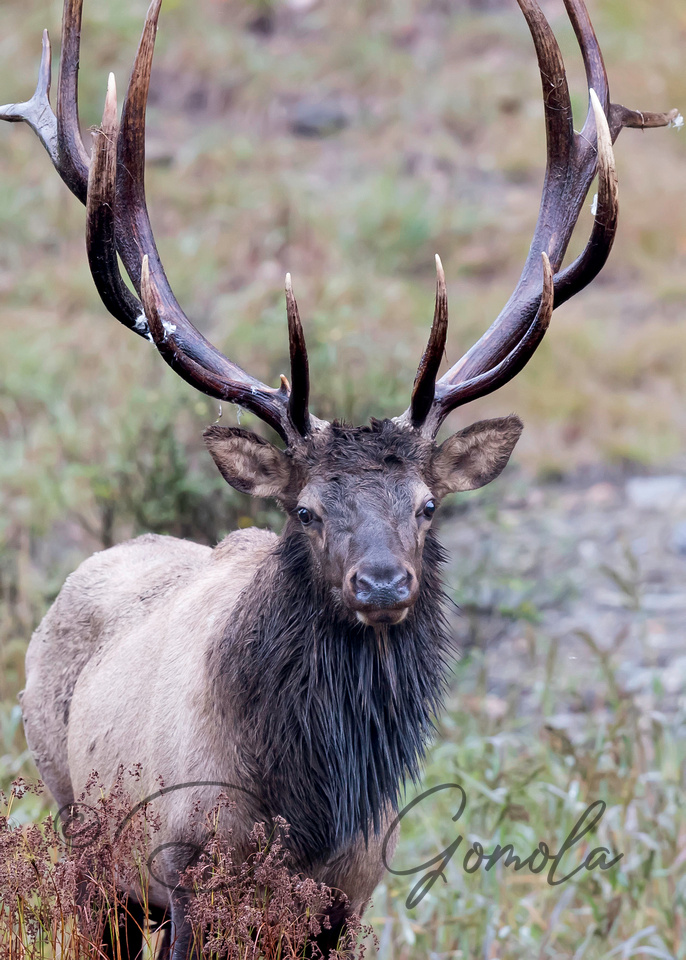 I met up with my friend Tom Dorsey before sunrise on that Tuesday morning.  We found ourselves with a decision to make.  We could hear bugling in a few different directions and after a few minutes of zigzagging around our options, we made a decision.  Based on his experiences, Tom had a hunch about a certain herd.  We based it on the number of bulls we could hear and Tom's experience of which way they would leave the food plots and enter the woods for the day.  That is where we headed. After a long hike through the woods, we made it to a clearing with a small pond.  Elk cows, feeding as they waited on instruction from their bull, already filled the field.  Moments later, bulls began to crest the hilltop and assess the situation. 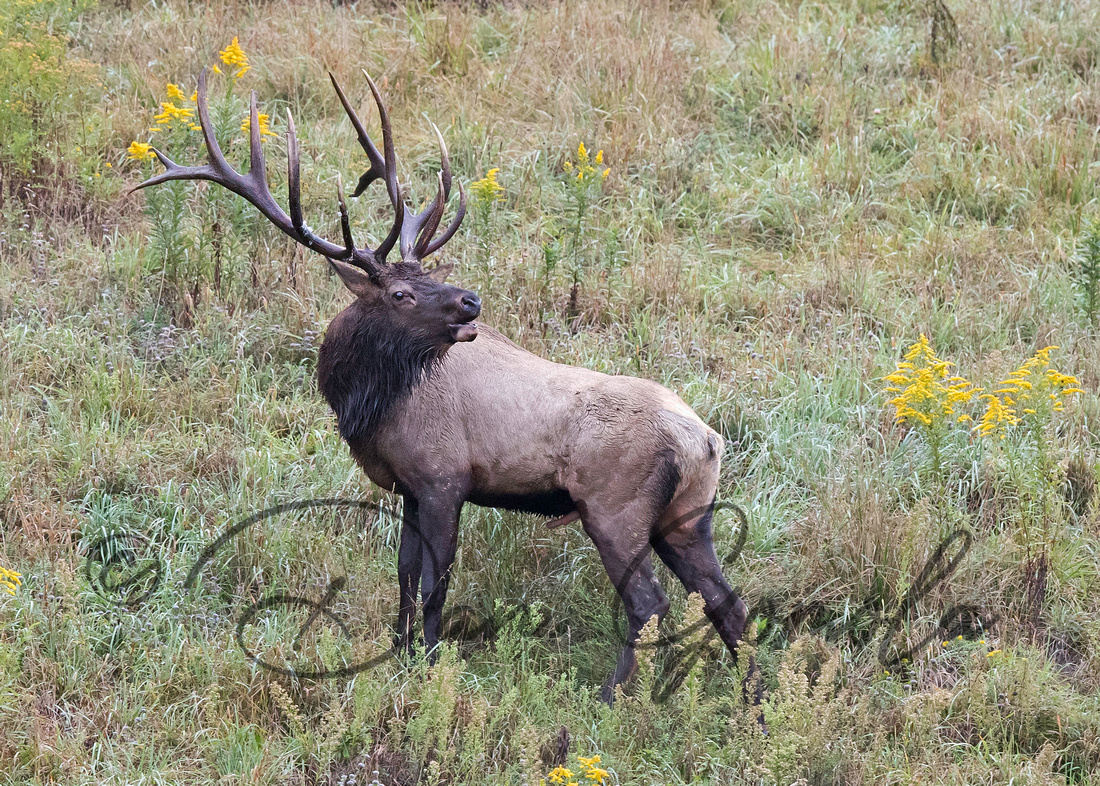 Tom and I were hoping the pond could be used in our photography that morning, but only one elk walked through it.  Several cows and calves came down for a drink offering a nice reflection in the water but our distance, and our 600 mm lenses, put us too close to get animal and reflection in the frame. 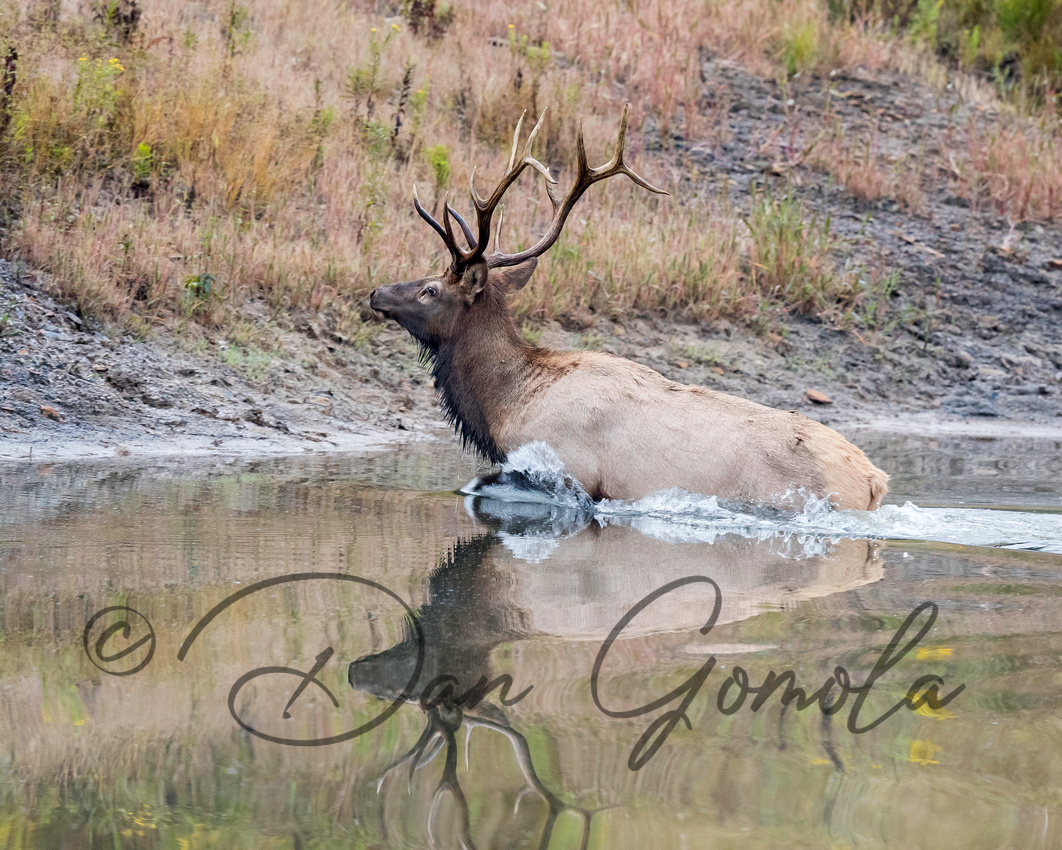 Keeping your herd together can be a daunting task when there are several other decent sized bulls trying to steal some. This bull gave chase but she was not ready!  Hey, you never know unless you try, right? 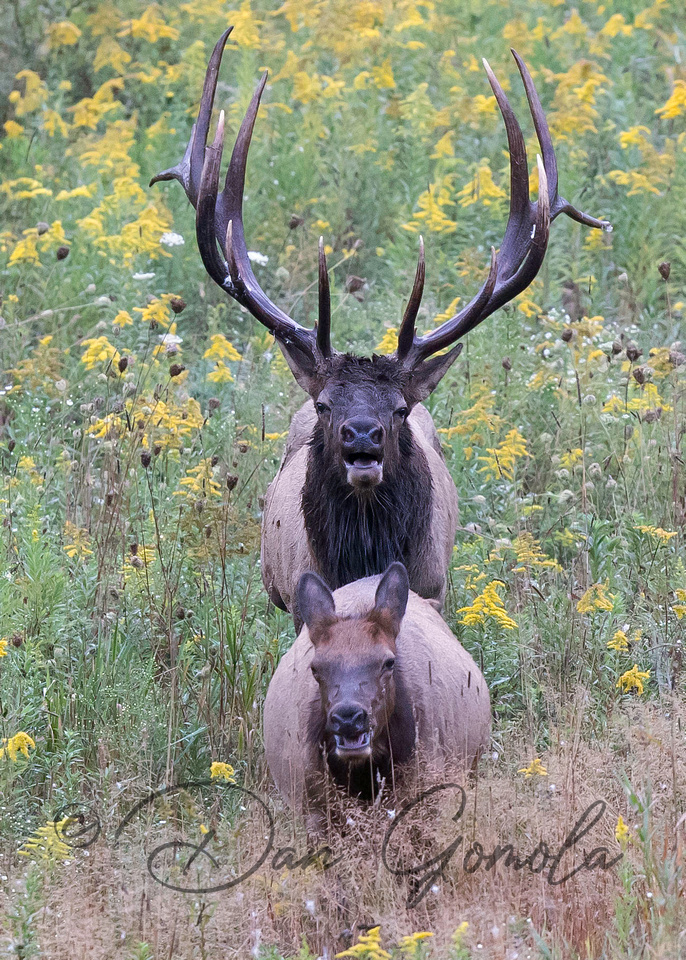 It was a fantastic morning as I was able to make photos in wild terrain.  This bull stops to sniff the air in his quest to find a cow in heat. It did not take long for all of the elk to enter the woods, leaving us with an empty field and an end to our elk photography for the morning.

Tom and I spent a great afternoon touring Elk Forest and other areas that he frequents.  After dinner, we went to State Game Lands 311 containing an area known as "The Saddle".  The cool, wet evergreens was the home of a bull and his cows for the day.  We hoped they would exit the woods while it was still light enough to photograph them.

We were on the northeastern side of the mountain so the setting sun affected us early.  As I was beginning to worry that we would not see anything, they emerged.  Here is one of this years' calves. 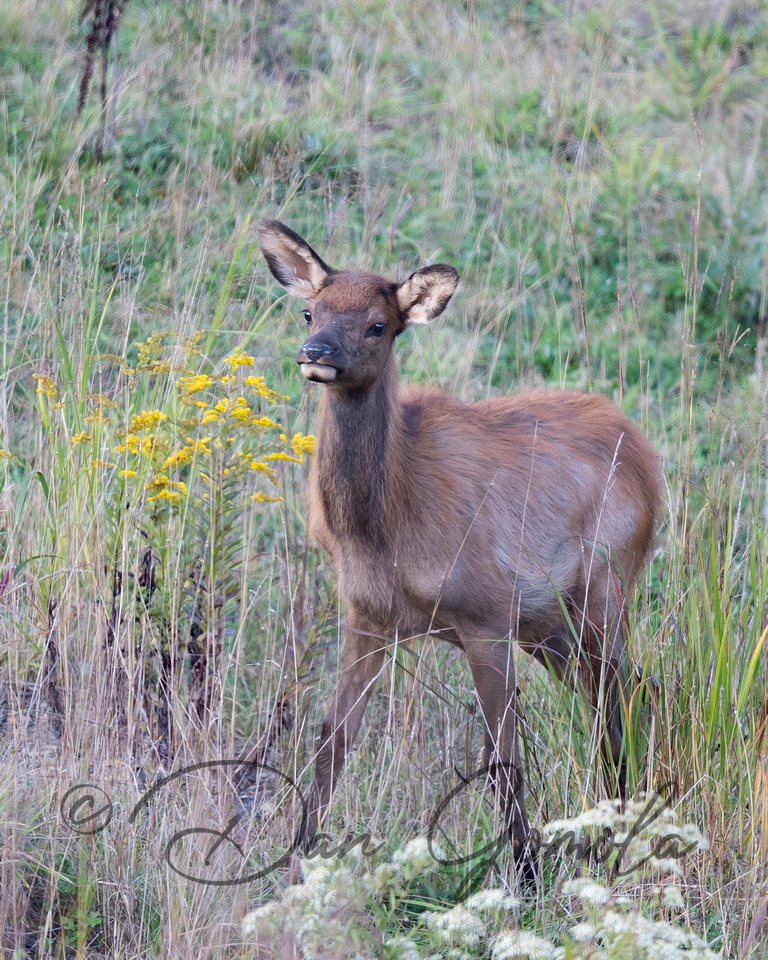 This is the big guy that people were trying to get a glimpse of all day long through the heavy cover of brush and evergreens. 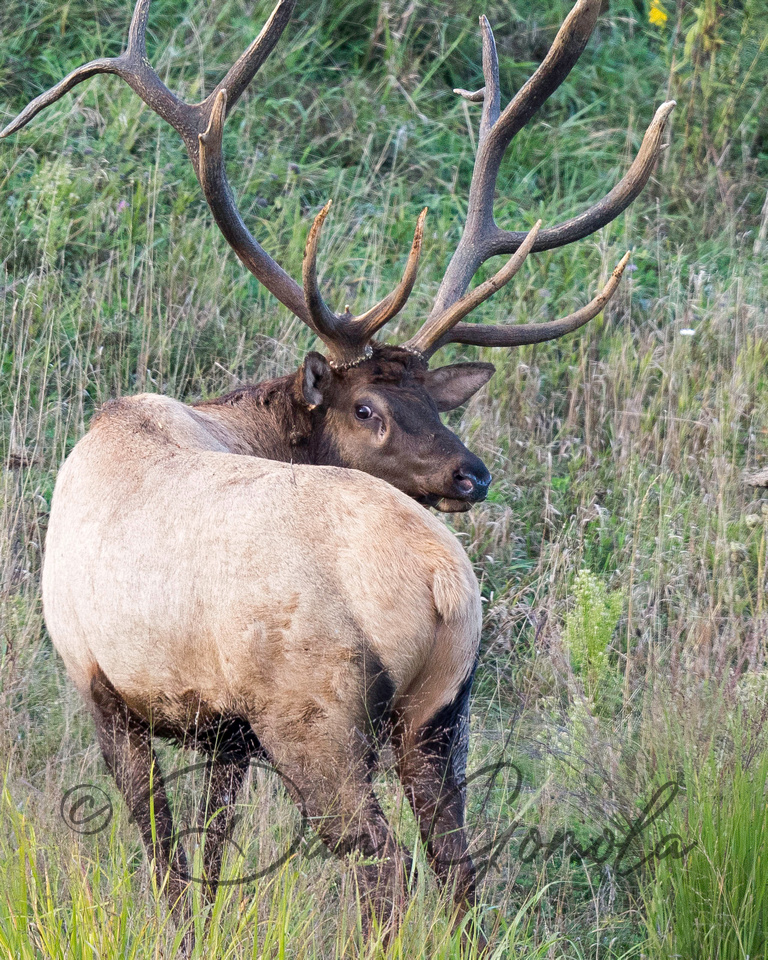 He was the only bull in the immediate area but bulls on far away hills answered his bugles. 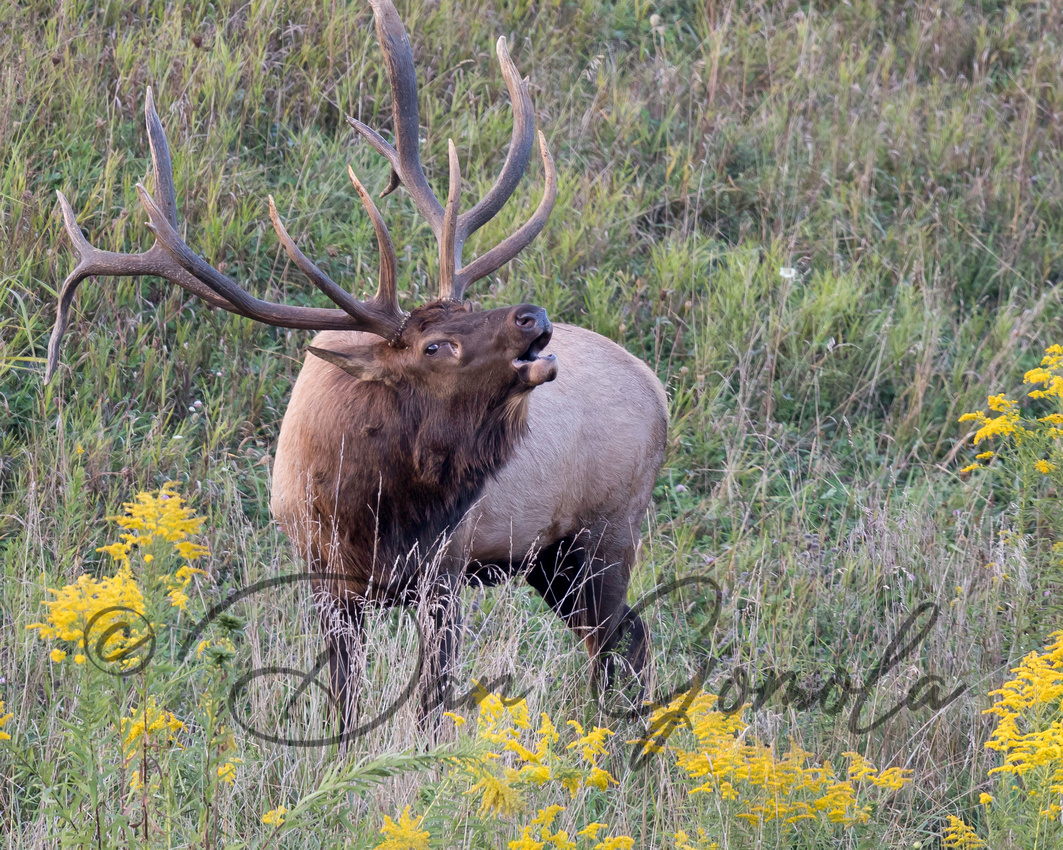 He spent some time feeding in the meadow and, feeling at ease, decided to lay down.  Even though he was relaxing, he still answered other bulls' bugles with authority. 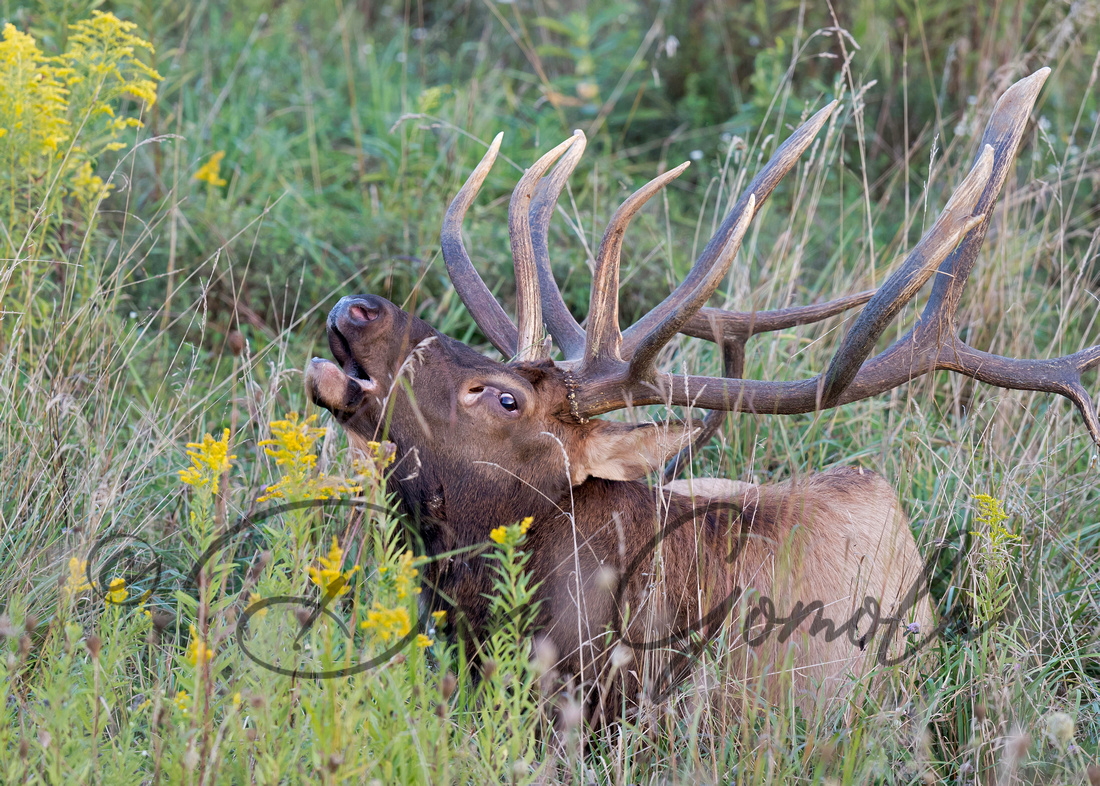 I love the capability of modern cameras to shoot in low light.  When it becomes too dark to make photos, you usually have some time to shoot video.  Bulls are known to destroy young trees with their antlers.  As I mentioned earlier, this is how they turn them from bone white to chocolate brown.  I suppose they also do this to mark territory too.  Announcing to smaller bulls that they are not alone!

This video shows this bull destroying this small white pine while answering bugling from adjacent fields.

Here are a couple photos I made between video clips.  I saved them until you've watched the video so I wouldn't give away how much he tore up the tree. 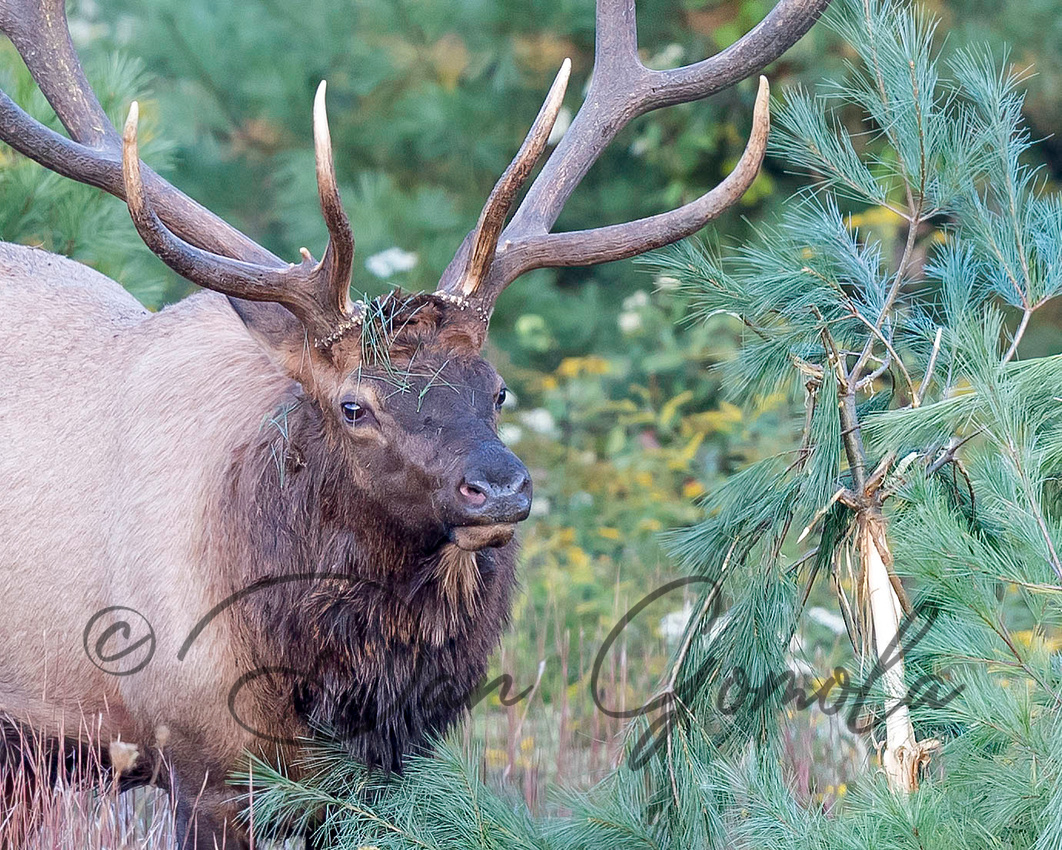 During all of that commotion, one of the calves paused for a portrait. 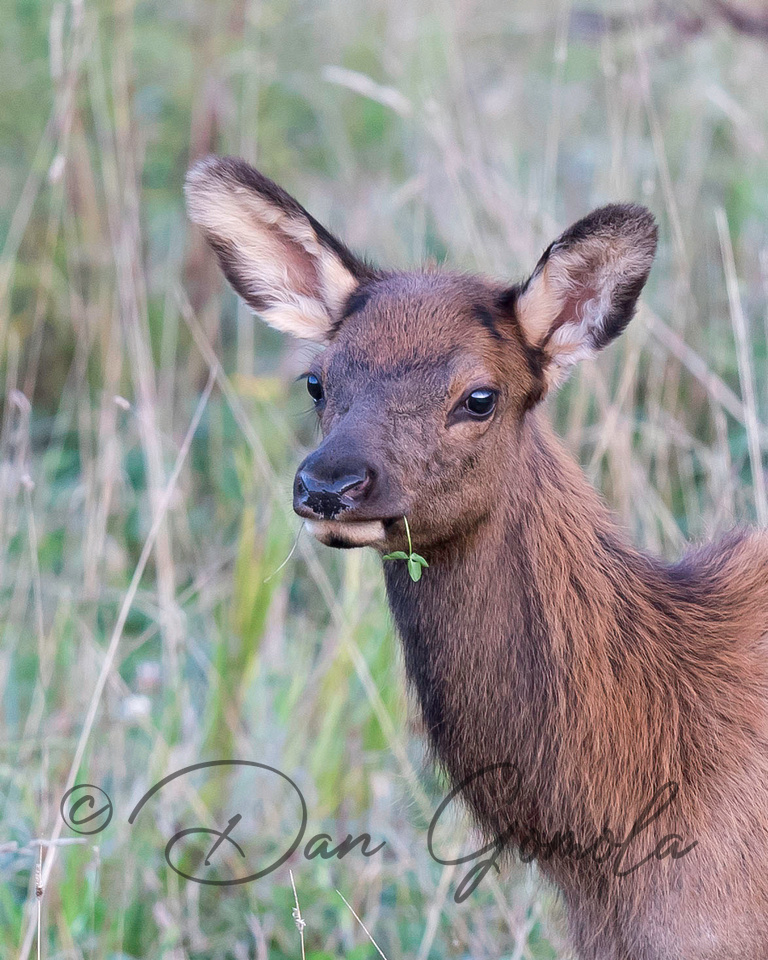 That ended a fantastic day spent with good photographer friends and plenty of elk.  I told Tom "if I don't see any more elk this rut, I will still be happy."  Little did I know that statement would nearly come true.

A few days later, the heat rolled in.  Temperatures reached nearly 90 degrees on days that previous years required a layering of clothing to keep you warm in the morning and evening.  It was time for the Facebook club, Benezette Elk Camera Club, to hold their fall picnic.  It is always held to coincide with the rut.

Elena and I plan a three-day mini-vacation in Benezette during this time.  We knew the heat would affect the photography but the overall experience would still be great.  Our first day there produced no photo opportunities until the end of the day.  We met at Tom Dorsey's camp for an evening around the fire talking about the lack of elk during good light.  We probably solved some world problems that evening too.  The sun was below the mountains when a few elk entered the field below the camp.  The one bull was pretty big so I decided to try some night photography.  I pushed the sensitivity on my camera (ISO) to 12,800 and my shutter speed was below 1/100th second.  Only a couple photos were sharp because the bull stood absolutely still during a bugle. 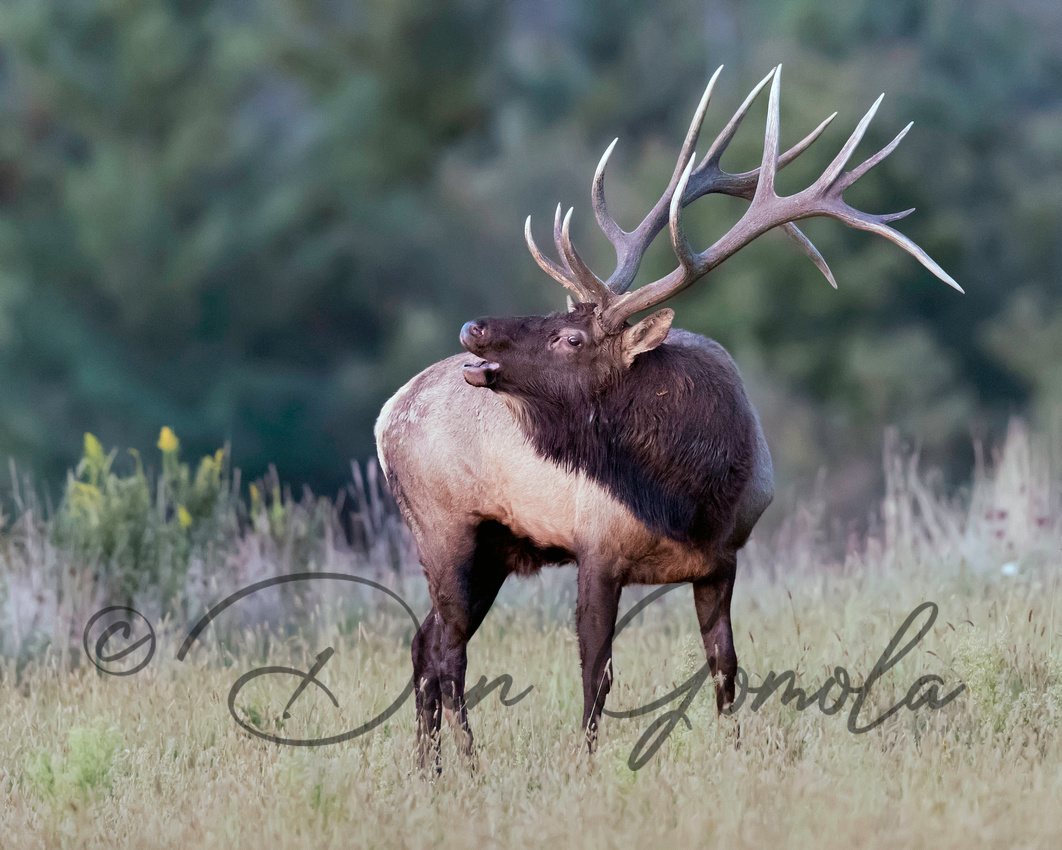 The photo opportunities did not get any better the next day.  I found this spike, still in velvet, feeding in a turnip plot. 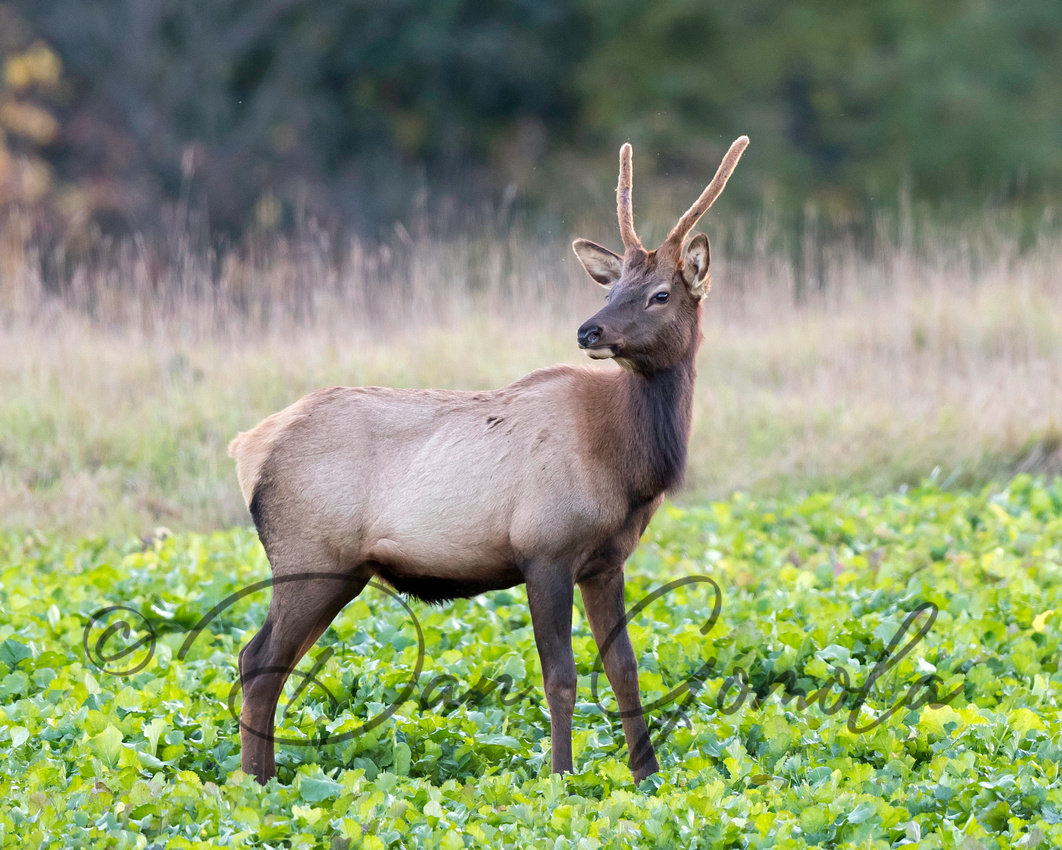 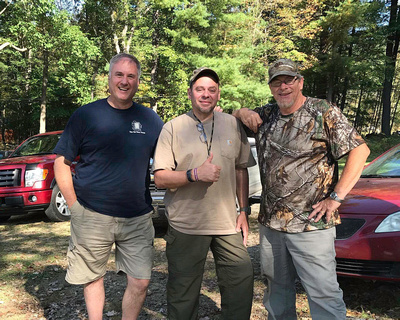 As I mentioned earlier, this trip is not just about elk.  We have a group of friends sharing the same interests and this provides a reason to meet up and talk about elk, photography equipment, experiment with astrophotography in the darkness of the Benezette skies, and I cannot leave out the inevitable joking around.

This year, Fernando Trujillo, a friend Tom and I made during last years' Conowingo Dam Bald Eagle photo trip, made a five plus hour journey to join us for the weekend.  We felt bad for him because the heat took away what would have been an awesome elk experience. Elena snapped this cell phone photo of us after breakfast at the Old Bull Cafe.

Even with the lack of elk, I think the overall experience got him hooked.  We'll get 'em next year Fern!

Heat remained in the forecast so Elena and I decided to leave elk country a day early.

About a week later, the rut was only beginning to slow down so I accompanied my friend Jake Dingel back to Benezette.  The morning produced some action before the elk retreated into the woods.  Below is a short video of this foggy morning.  After the dominant bull took his cows into the woods, another bull tried to catch one of the remaining cows.  During the video, you can hear the dominant bull bugling in the woods.  The video ends with a bull we found on the sunny hilltop of Winslow Hill.

As you saw in the video, the difference between the foggy valley and Winslow Hill was extreme.

When the bugling stopped, Jake and I made a few stops in Elk Forest to photograph songbirds.  We were expecting migrating warblers as well as some wintering birds. Below is a Ruby-crowned Kinglet just as it was jumping into flight. 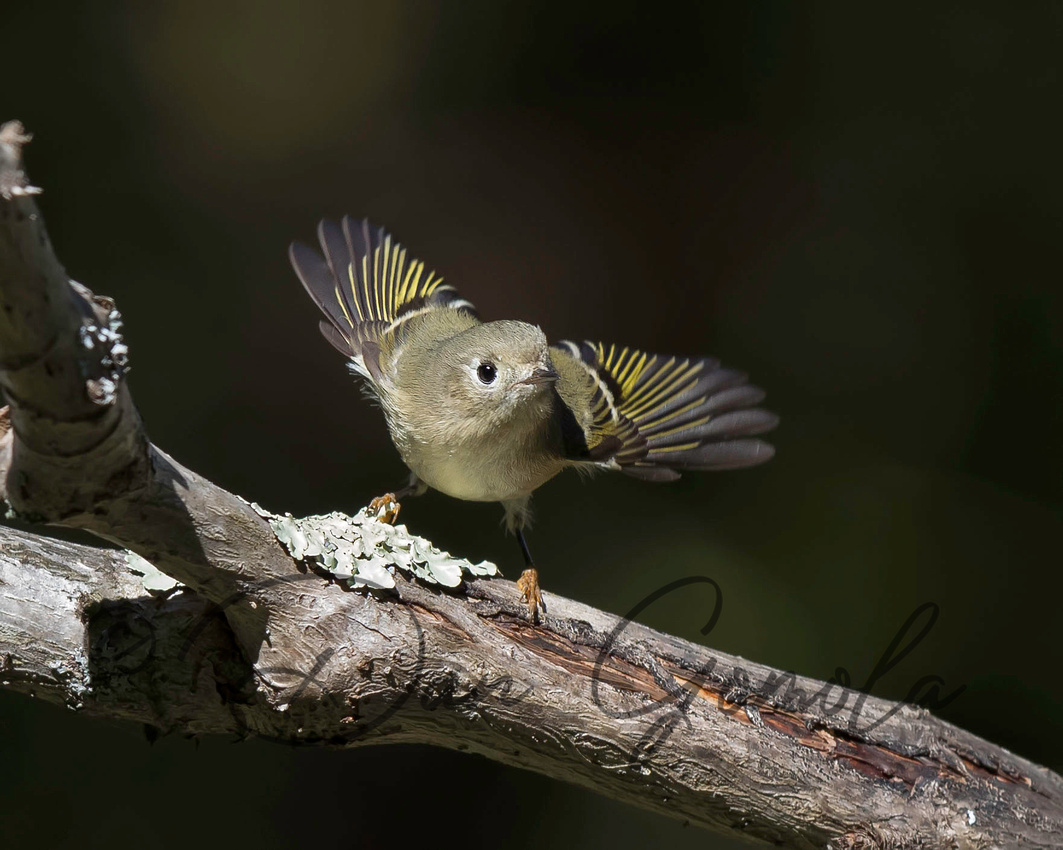 The sun lit up this female Eastern Towhee in front of the dark shadows of the forest. 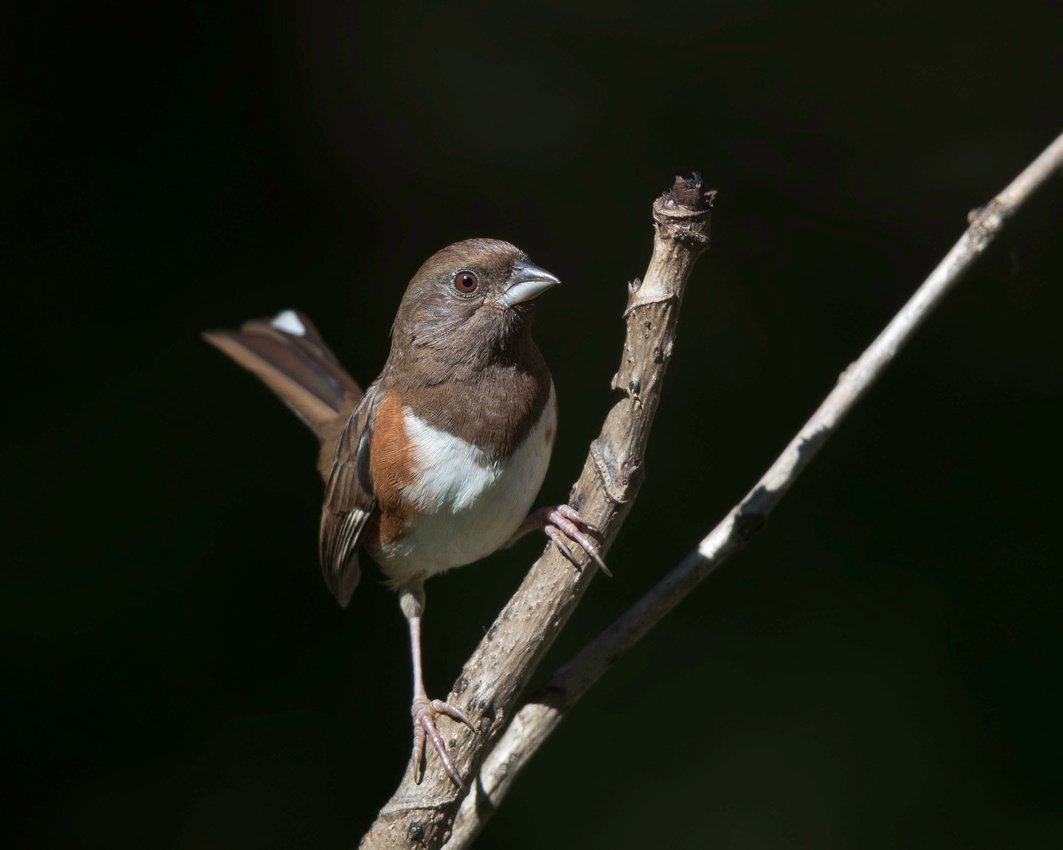 The Blackpoll Warbler is one I missed during the spring migration.  We found one on this day. 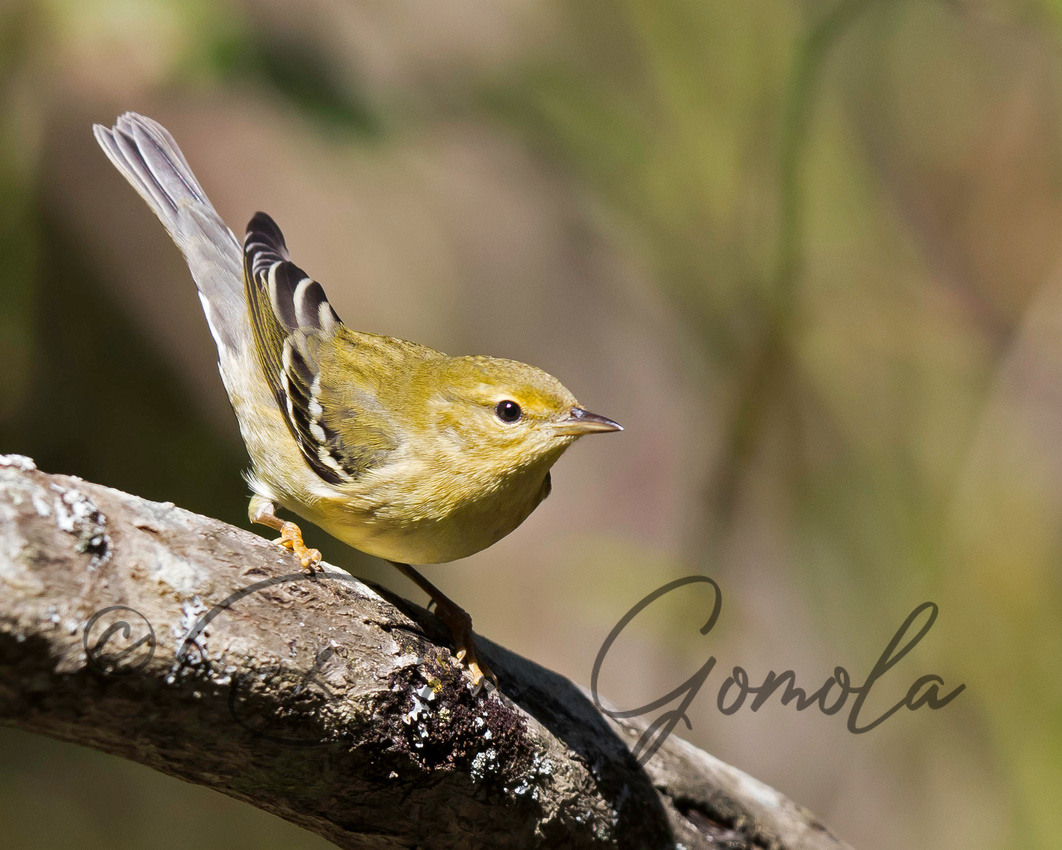 The Ovenbird is usually heard before it is seen.  We caught a glimpse of this one on a tree limb for a few seconds. 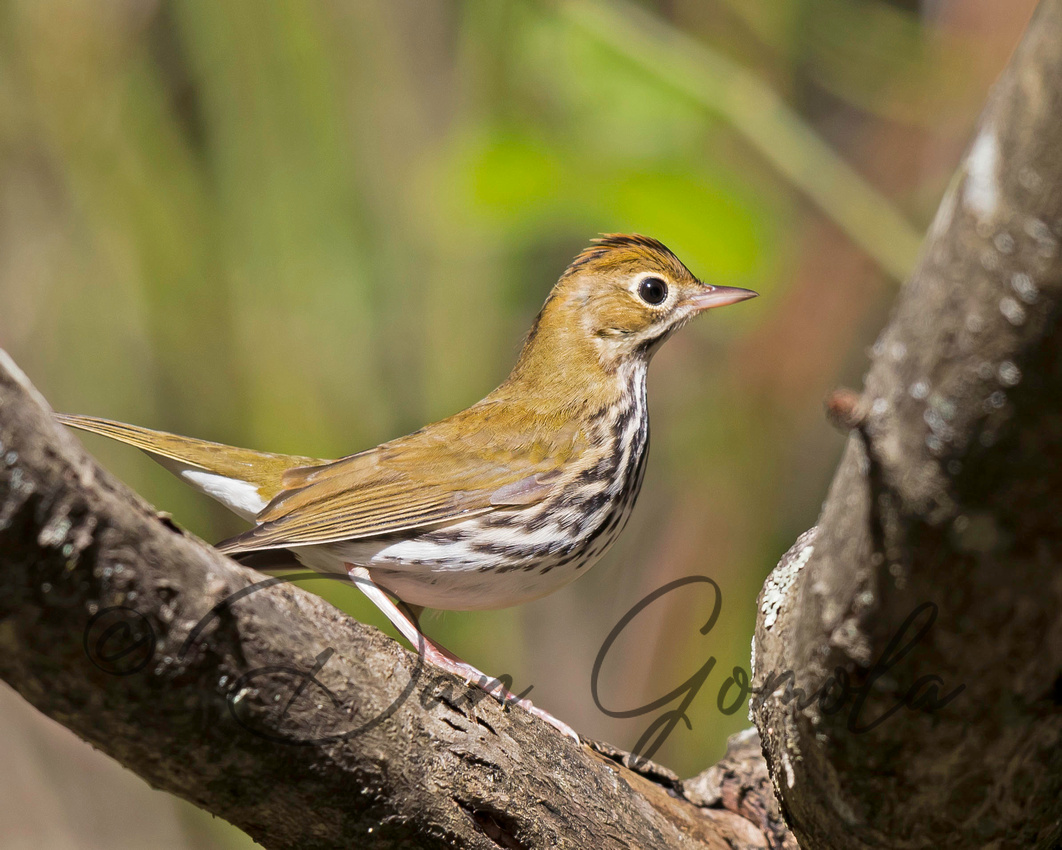 Last spring, I photographed my first Yellow-bellied Sapsucker.  They were adult males and females.  On this day, Jake and I found a juvenile. 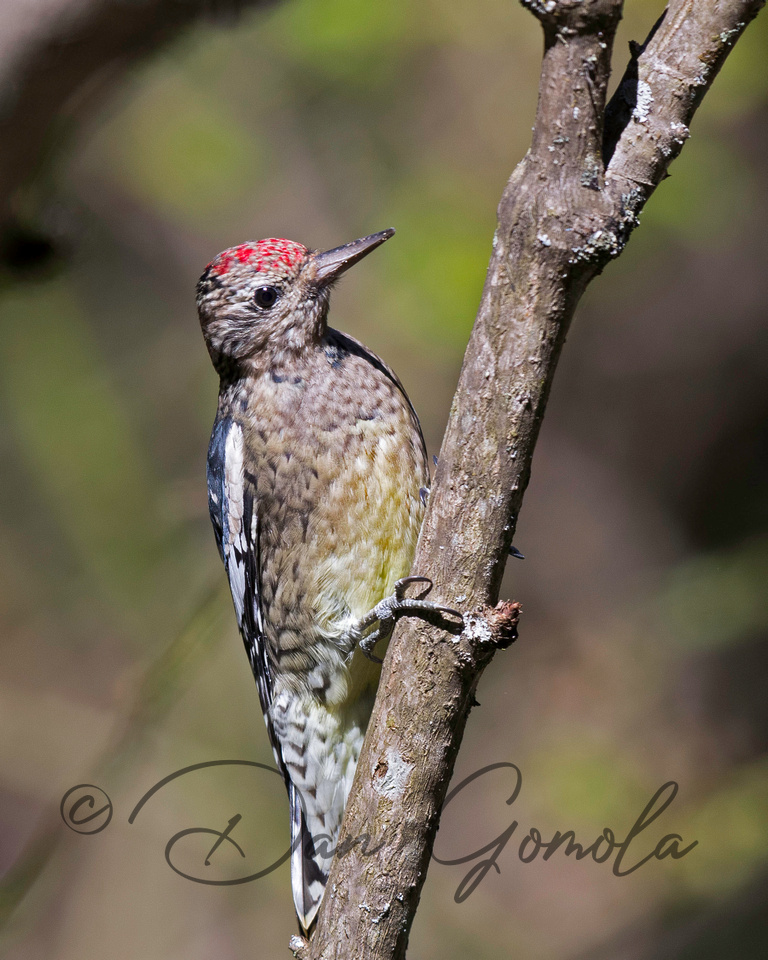 Black-capped Chickadee's are very popular in Pennsylvania, especially during winter.  Along with Tufted Titmouse, they are frequent visitors to backyard bird feeders.  Here is a portrait of one that came very close.

As our quest for birds was coming to an end, we noticed this unusual rock formation.  I posted this photo on a Facebook group called "Rocks, Fossils & Minerals Identification" for some expert help.  There were a lot of comments and opinions that I'm not going to get into here.  I'll just leave it as "nature is awesome!" 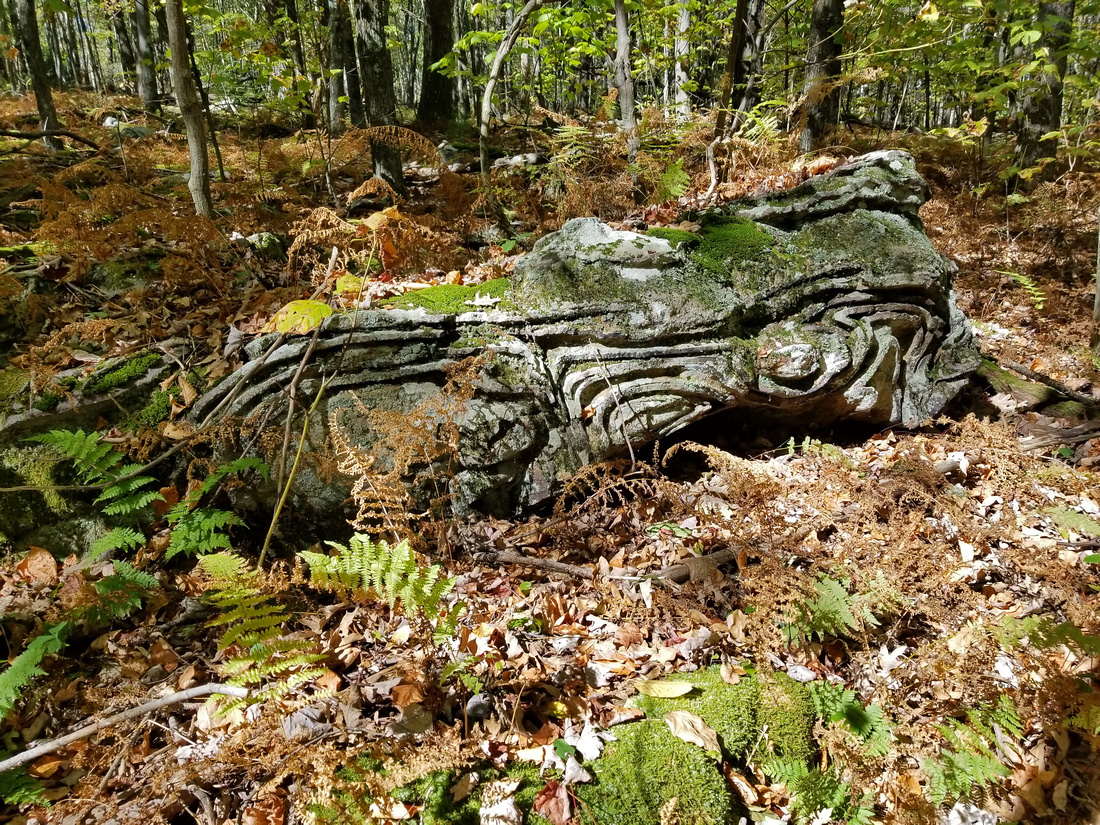 We met up with Tom for an early dinner at the Benezette Hotel before beginning an evening of hunting elk.  This time, we decided to stay in the woods since that seems to be where the elk wanted to be.  As we found our positions, we managed to see a few elk. 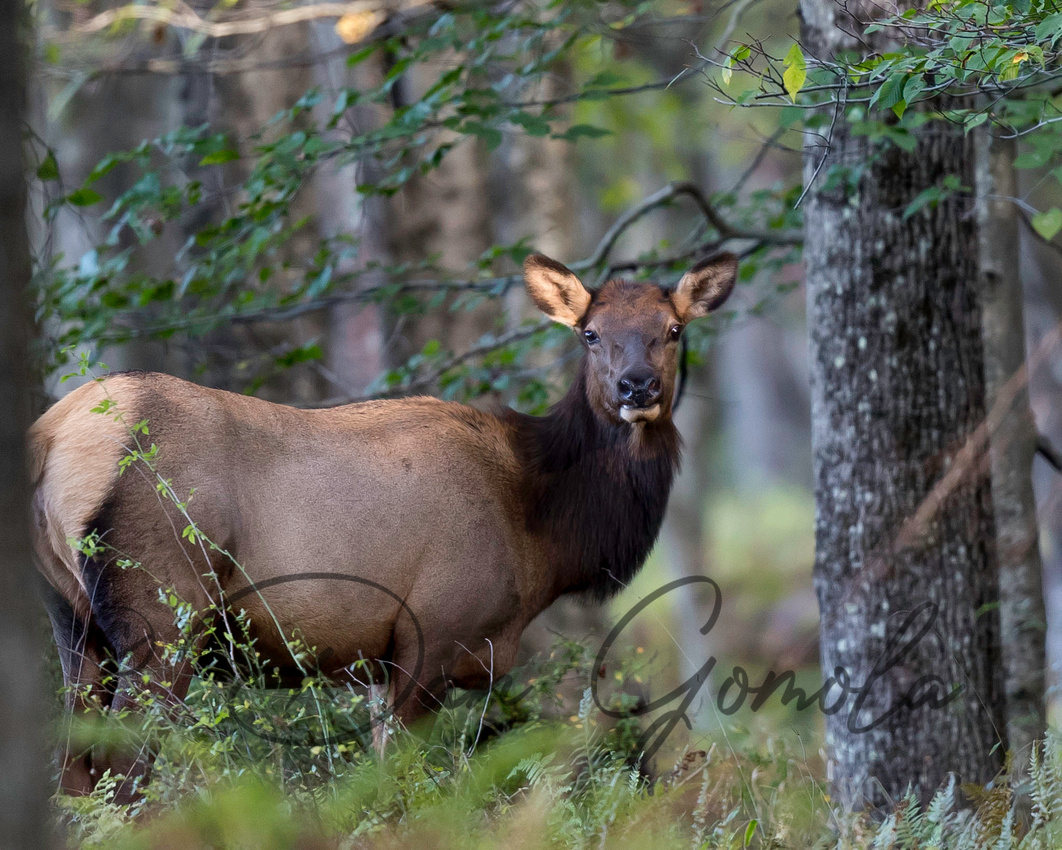 As the sun set, the elk began to pass us on their way to the fields where they will eat. 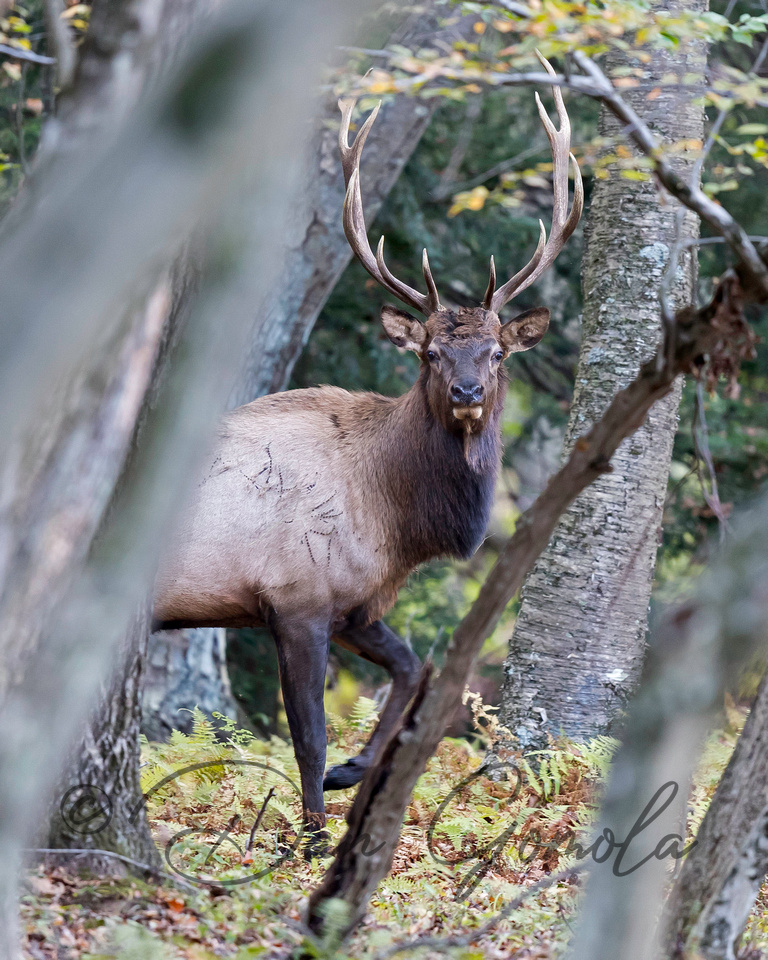 Some were a little slower than others or maybe they weren't as hungry. 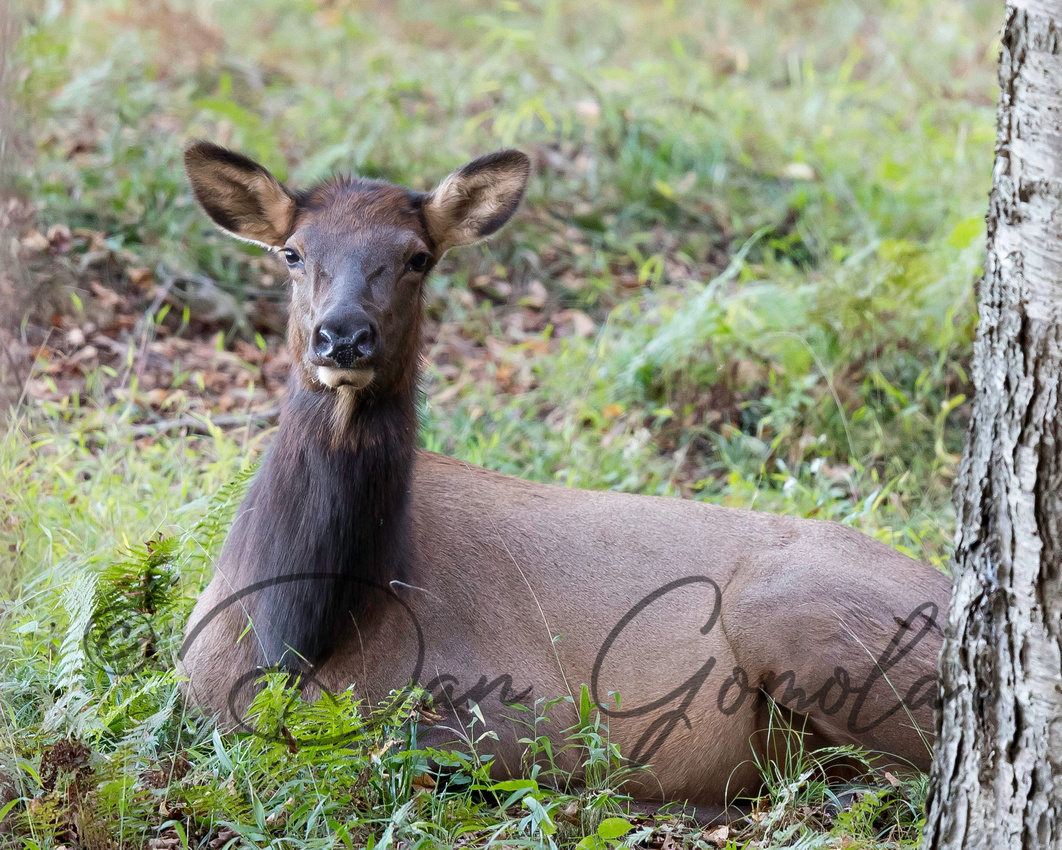 It was nearly too dark to shoot when we saw this bull who Tom immediately dubbed "Bullwinkle". 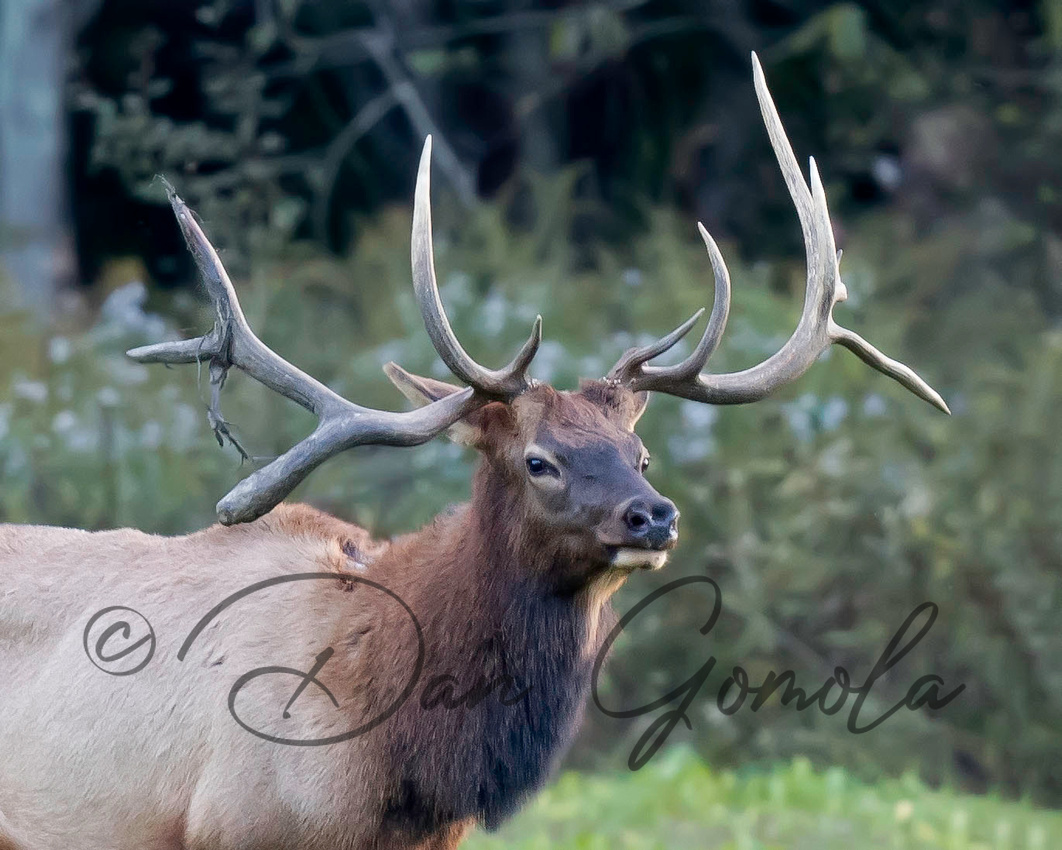 I'll end this photo blog with one more video.  These clips are from the evening I just described to you.  It gives you an idea of an elk's evening from rest to rut.