In this blog post I'd like to share a few photos I made in our grassland areas.  Grassland birds are difficult to photograph because they spend much of their time in the grasses low to the ground so they are heard but not seen.  Occasionally, they will perch on top of a small shrub or rigid stem of a meadow flower, providing opportunities for photography.  I have to admit, there are ways to make it possible to photograph many species in our grasslands but it's time consuming and travel heavy because different locations hold different species.

With that said, there are many more grassland birds in the Pennsylvania countryside than I have in this photo blog.  I'd like to share what I have.

One of the most fun, and challenging, birds to find is the Bobolink.  Their bubbly song has been compared to the sound of R2D2 from Star Wars.  Since Bobolinks often sing in flight, look in the air when you hear them sing.  I found the Bobolinks in the next few photos at Volant Strips in Lawrence County, PA and state game land 311 in Benezette, PA. Bobolinks are an interesting looking bird.  No other bird in North America has a white back and black underparts.  Males also have a rich, straw-colored patch on the back of his head.  By the end of summer, they will molt into a buff and brown, female like plumage. Here is a female Bobolink I photographed last summer. Grassland birds may eat insects, seeds, or rodents, all of which are plentiful in a healthy prairie.  Prairies provide many different habitats for nesting.  Many grassland birds have adapted to nesting on or close to the ground.  Some birds prefer certain types of plant structure on the prairie, such as grazed areas with shorter grass; tall, thick vegetation that has not been burned recently or wet areas like sedge meadows.  This prairie is at Jennings Environmental Education Center in Slippery rock, PA. This is probably the last time I will talk about Bobolinks this year so I have to share one more.  Here is a Bobolink perched high above the thick grassland. Dickcissels are one of the last of the grassland bird species to return in the spring,  They are easy to spot and hear, perched high atop tall plants and road signs. Their song is some variation of “dick-cissel-cissel” or “dick-dick-cissel.”

On a recent trip to Benezette, PA to photograph elk calves and bulls in velvet, I spent some time in state game land 311, on a well known portion referred to as "the saddle".  The saddle is mostly a reclaimed strip mine covered in prairie grasses.  One of the prominent birds you can find up there is the Dickcissel.  Below is a male Dickcissel perched nicely on last years' flower head. Savannah Sparrows are one of the most numerous songbirds in North America, and while sometimes overlooked, are likely visitors across the continent.  In summer, they don’t hesitate to advertise their location, belting out a loud, insect-like song from farm fields and grasslands.

Many sparrows are similar in their color and markings.  One of the telltale marking of the Savannah Sparrow is the yellow spot above the eye. Raising young is hard work: a female Savannah Sparrow must gather 10 times her weight in food to feed herself and her young during the 8 days they are in the nest. This is a cell phone picture of one of the grassy fields at Volant Strips.  I didn't think of shooting video that day but I wish I had so you could hear all the birds singing.

The distinctive song of the Eastern Meadowlark sounds like a four-syllable “Spring of THE year”.  I found three or four flying around me in Benezette this spring.  Each time they landed they disappeared below the level of the grasses making photography impossible.  I was able to catch a few as they flew by. Not every bird occupying the grasslands are small songbirds.  Just like Batman and Robin had the Joker, the Lone Ranger and Tonto had Butch Cavendish, and Superman had Lex Luthor, the little birds of the grasslands have the Northern Harrier.

Northern Harriers fly low over the ground when hunting, weaving back and forth over fields and marshes as they watch and listen for small animals.  They eat on the ground, and they perch on low posts or trees.  Unlike other hawks, they rely heavily on their sense of hearing to capture prey.  In the breeding season they eat small mammals, reptiles, amphibians, and birds.  I captured this female Northern Harrier circling the grasslands of Volant Strips from 30 feet above the ground. 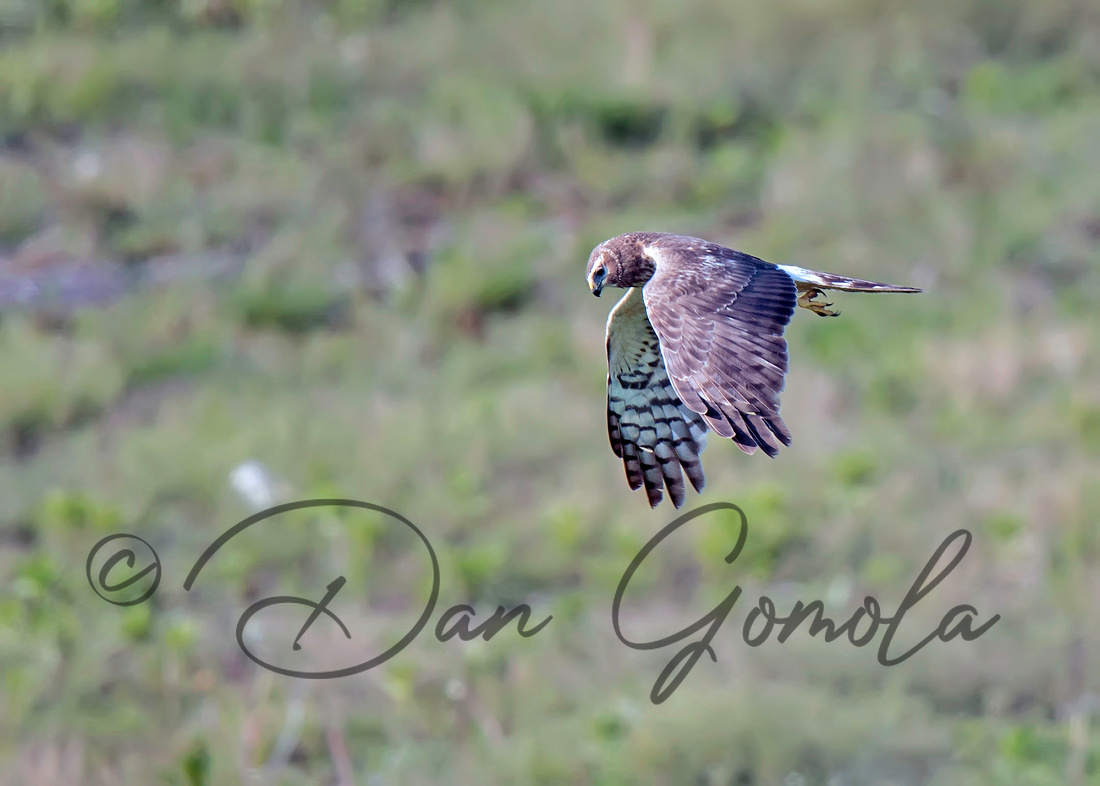 She didn't stay in my area very long.  I always wish they would find a perch nearby so I could get a nice portrait but so far it hasn't happened. You never know what else you will find in the grasslands.  I saw this White-tailed deer standing in the middle of a field as I was leaving Volant Strips one evening.  The sun was barely above the horizon but its glow highlighted her face just enough to capture the beauty of it all. On a final note, many species of grassland birds have been declining as agriculture has intensified.  The loss of native prairie habitat is a major cause of this decline.  Let's hope measures are being taken to reverse the decline.  What fun would it be to walk through a field of wildflowers and not hear the song of grassland birds?