Clever as a Fox

In the short five years that I have been seriously doing wildlife photography, I have not had the opportunity to photograph a den of foxes.  Last August, in a conversation with friends of ours from previous employment, they mentioned they had a fox den on their property.  Of course, August is too late to photograph the fox but they said they would call me in 2016 if the fox comes back.

Despite a new pipeline that went in behind their property, the foxes did come back.  After seeing them for the first time this year, our friends called me and I was able to spend some time photographing the family.

This den had four fox babies, known as kits.  During my visits, I got to see dad a few times but never saw mom.  She was seen by our friends but not while I was there.  Here is one of the kits giving me a nice portrait. 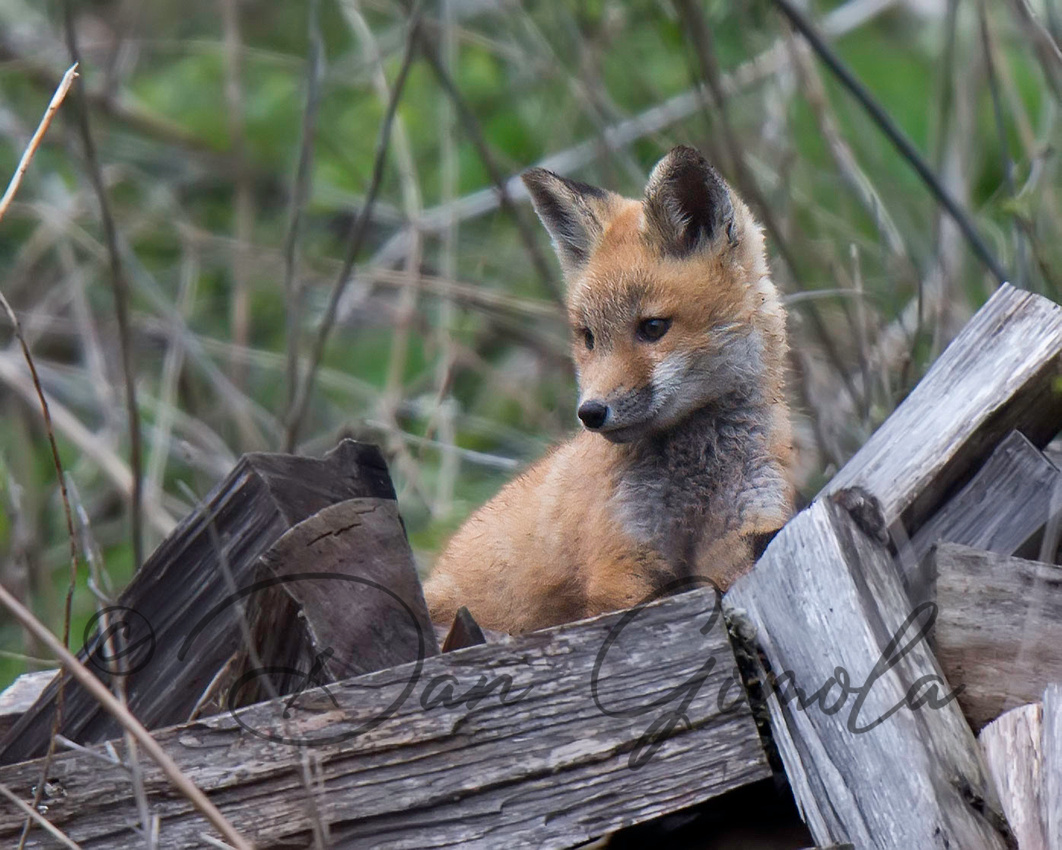 Every time I visited to photograph the foxes, it was overcast and/or raining.  I wasn't lucky enough to see the sun and the fox family at the same time. 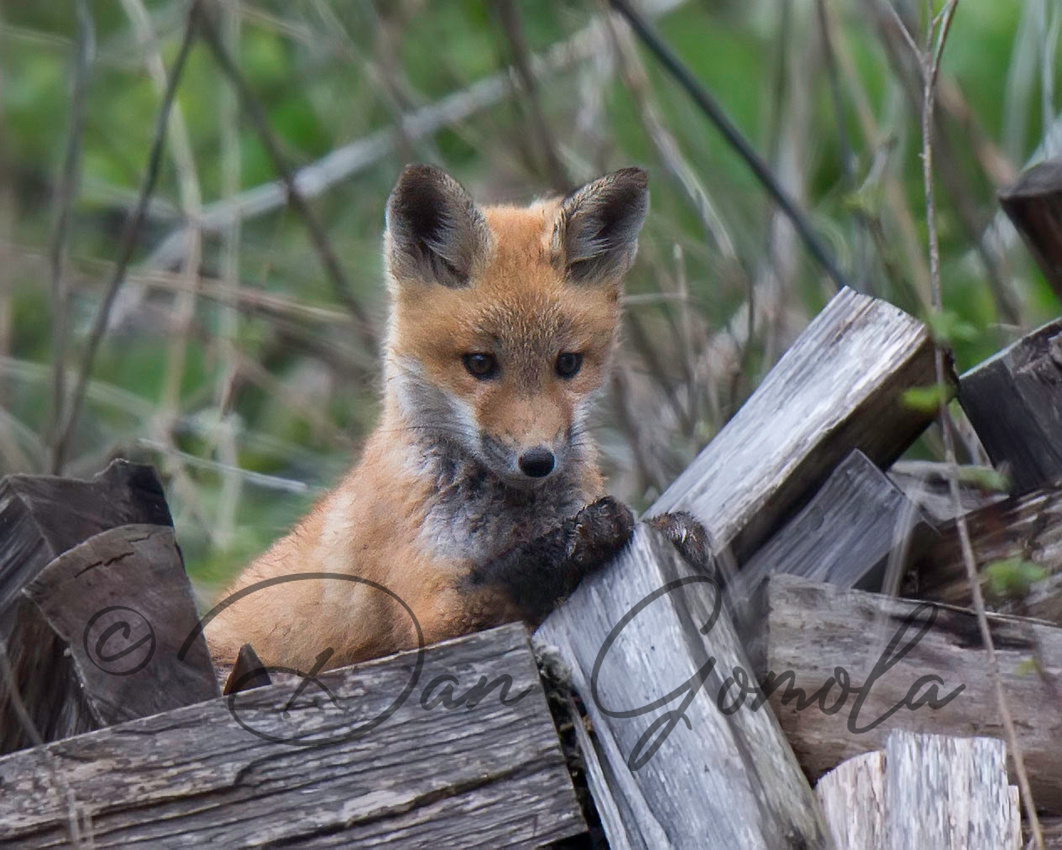 In winter, foxes meet to mate. The female, or vixen, typically gives birth to a litter of 4 to 10 pups with 6 being the average.  At birth, red foxes are actually brown or gray but get their red coat by the end of the first month.  Both parents care for their young through the summer before they are able to strike out on their own in the fall.

They are playful pups.  Here, two of the four are rolling around in last years' leaf pile. 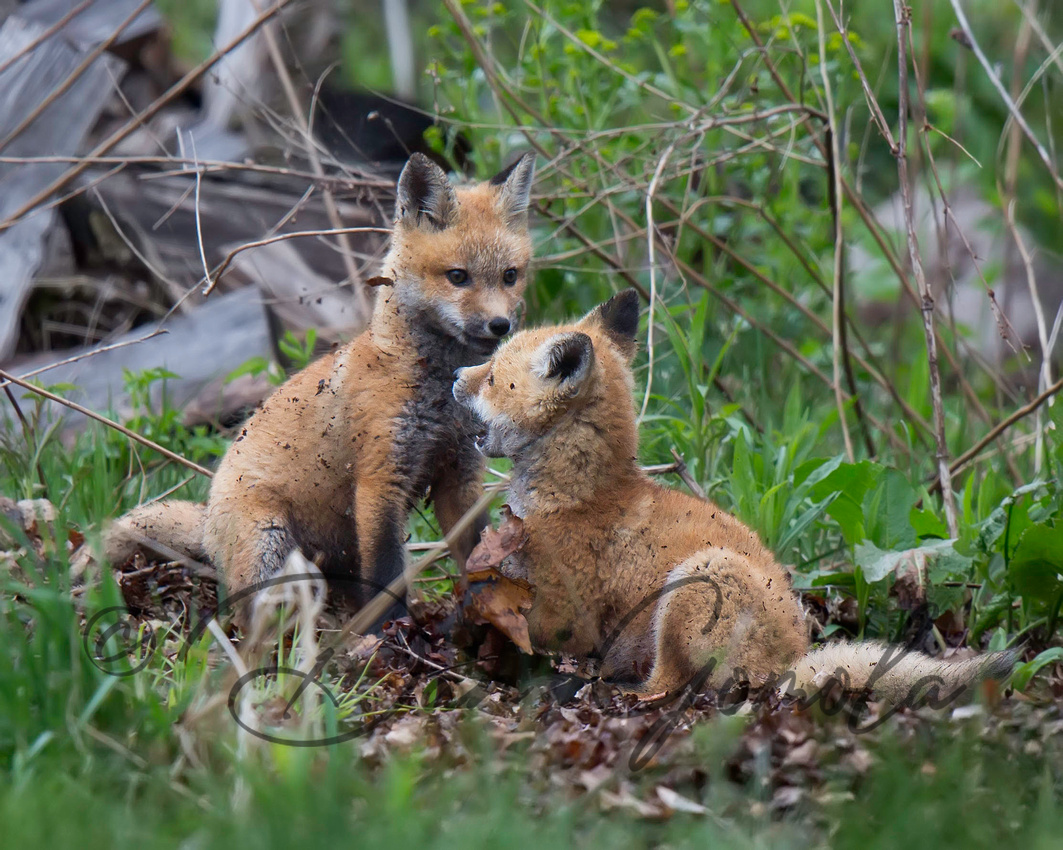 Even the little ones need a rest period. 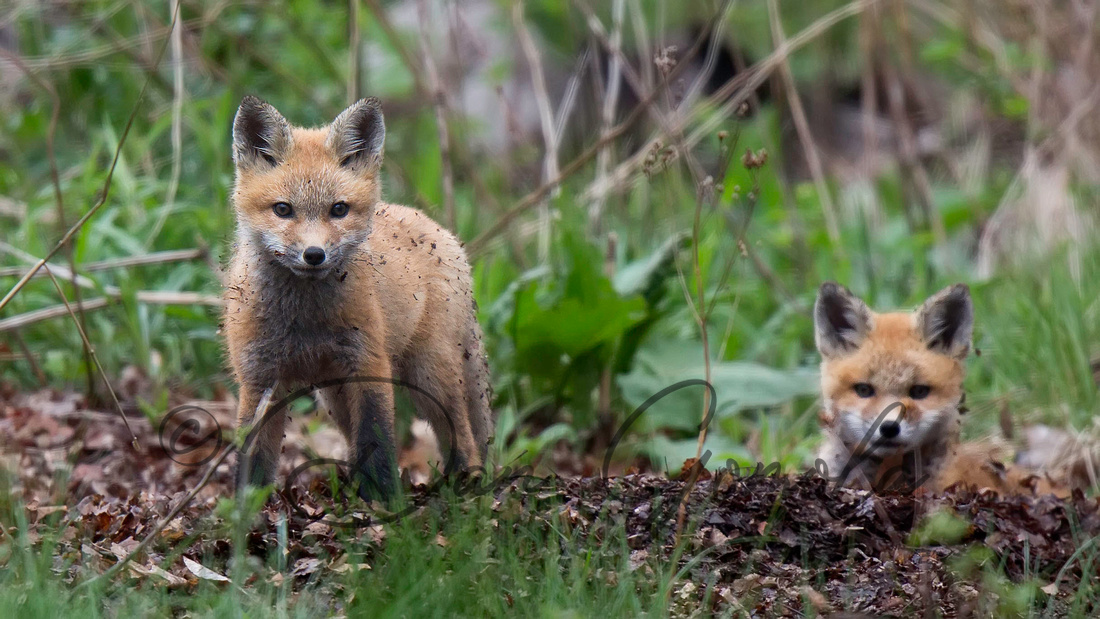 This next photo is the dad.  I have been told that the vixen usually has a ratty coat because the kits are tugging at her all the time.  Plus, when mom is present, at least one of the kits will try to nurse.  This fox's coat looks pretty nice and no kit tried to nurse, so I'm assuming this is the dad. 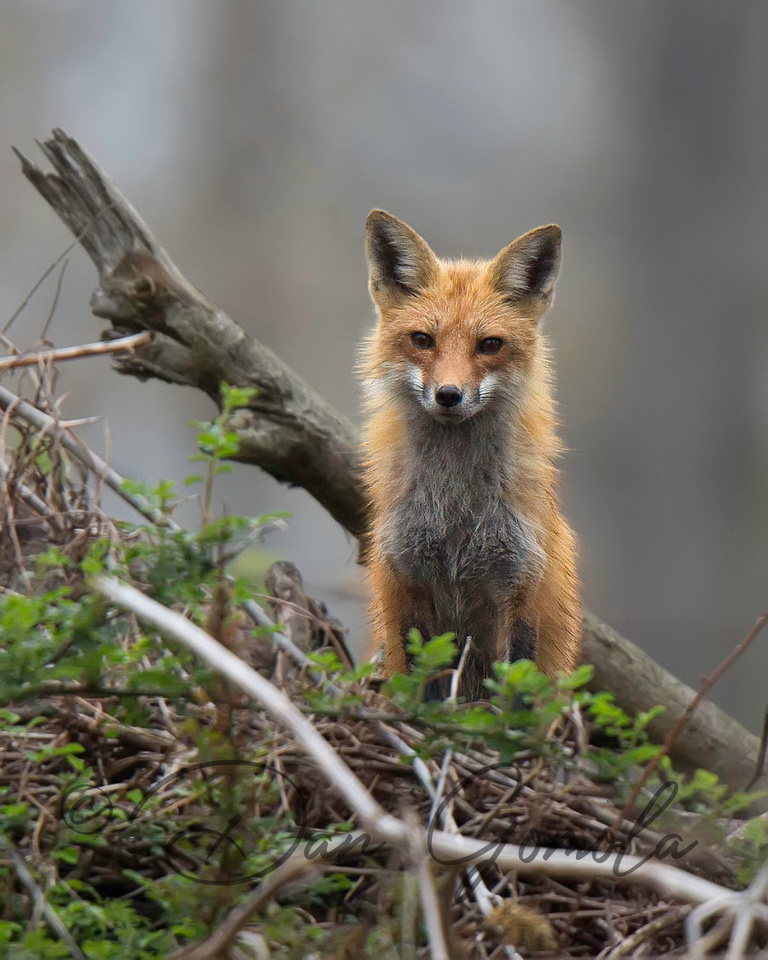 The fox is a very shy animal.  If they feel they are in danger or have been "discovered", the parents will move the family to a new den.  Because the kits were so big on this first night they were seen, it leads me to believe they were actually born in another den and danger caused a move to this former den.

Notice the thick tail on these kits.  The fox uses its thick tail to aid in its balance, but it has other uses as well.  They also use their tail, or brush,  as a warm cover in cold weather and as a signal flag to communicate with other foxes. 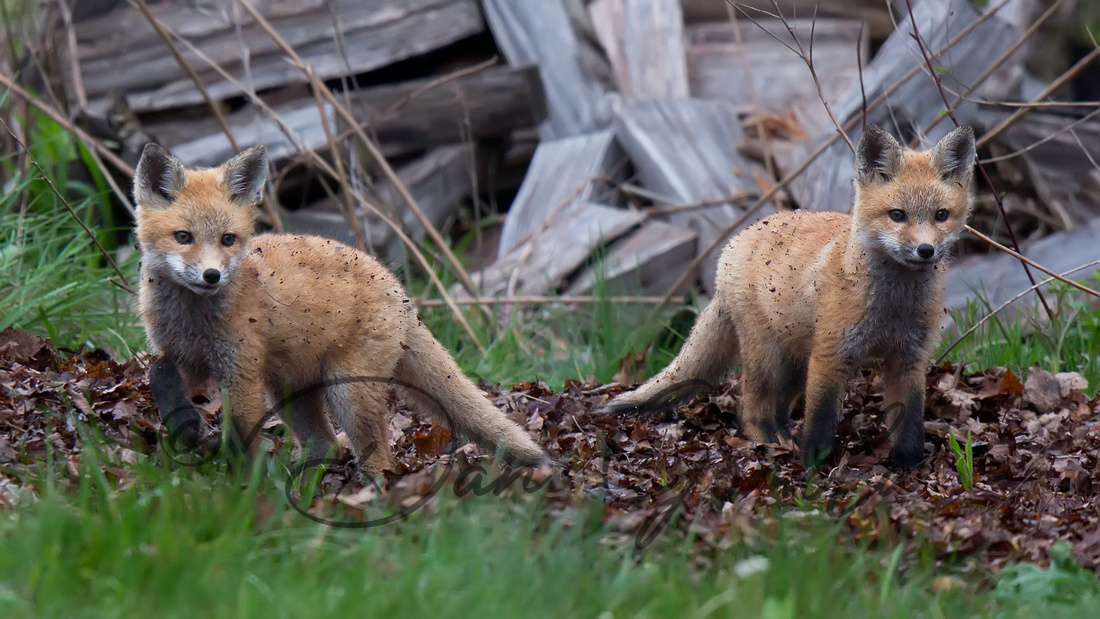 These little fox kits are so adorable.  They look like a toy.

Here is another photo of dad watching over the playful pups. 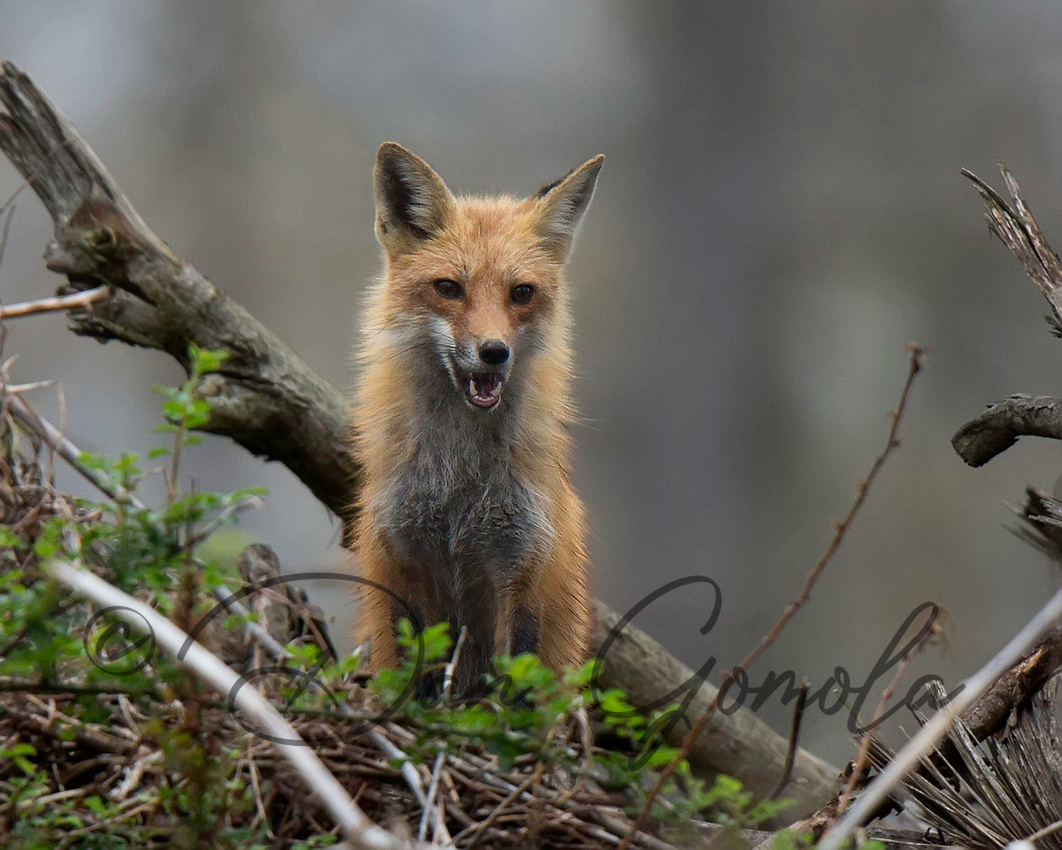 Red foxes are solitary hunters who feed on rodents, rabbits, birds, and other small game - but their diet can be as flexible.  In the photo below, dad has a rodent, covered by a large oak leaf (except for the tail), for his family of four. 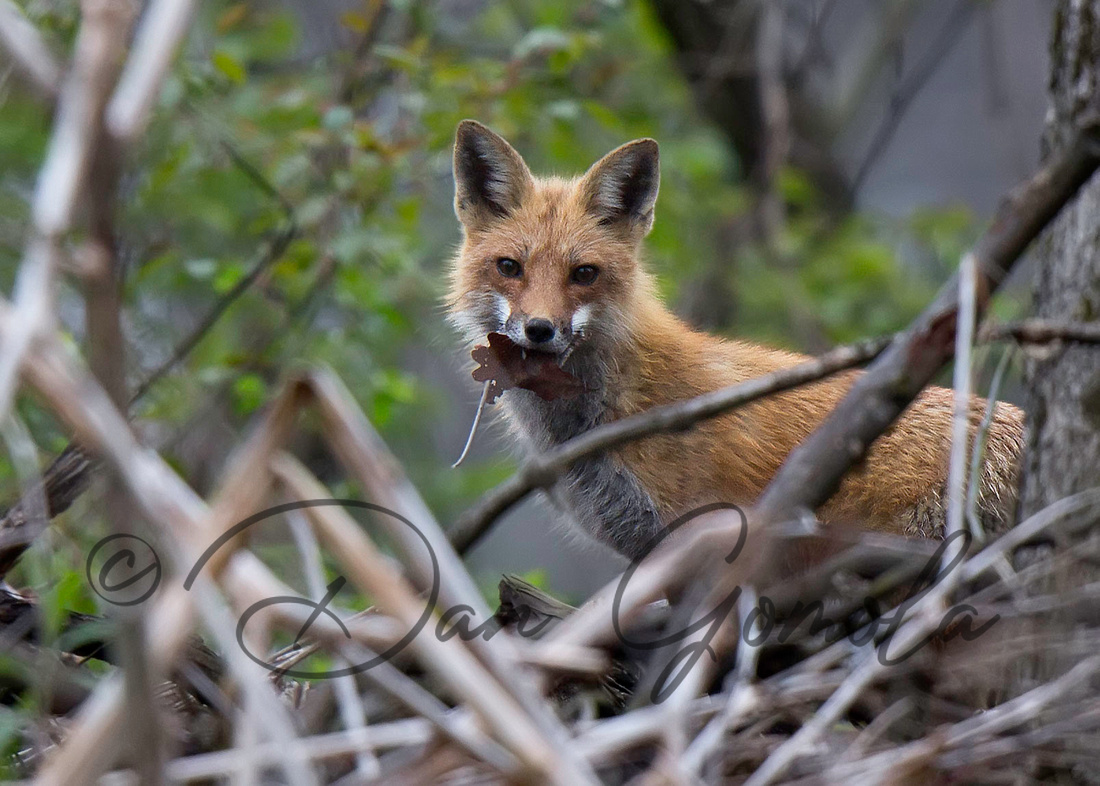 Typical, playful pup.  If a stick is available, they love to carry it around during play. 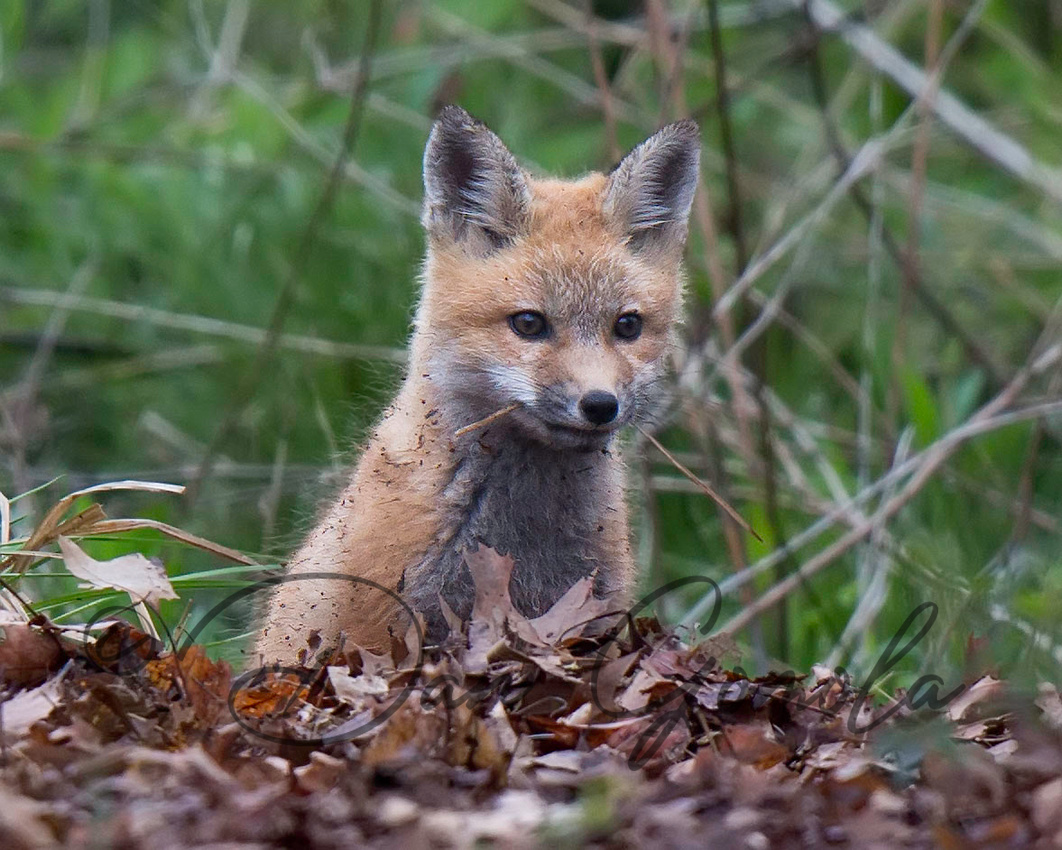 Dad spotted me this time.  However, he didn't seem to mind as he proceeded to lay down and faced the opposite way. 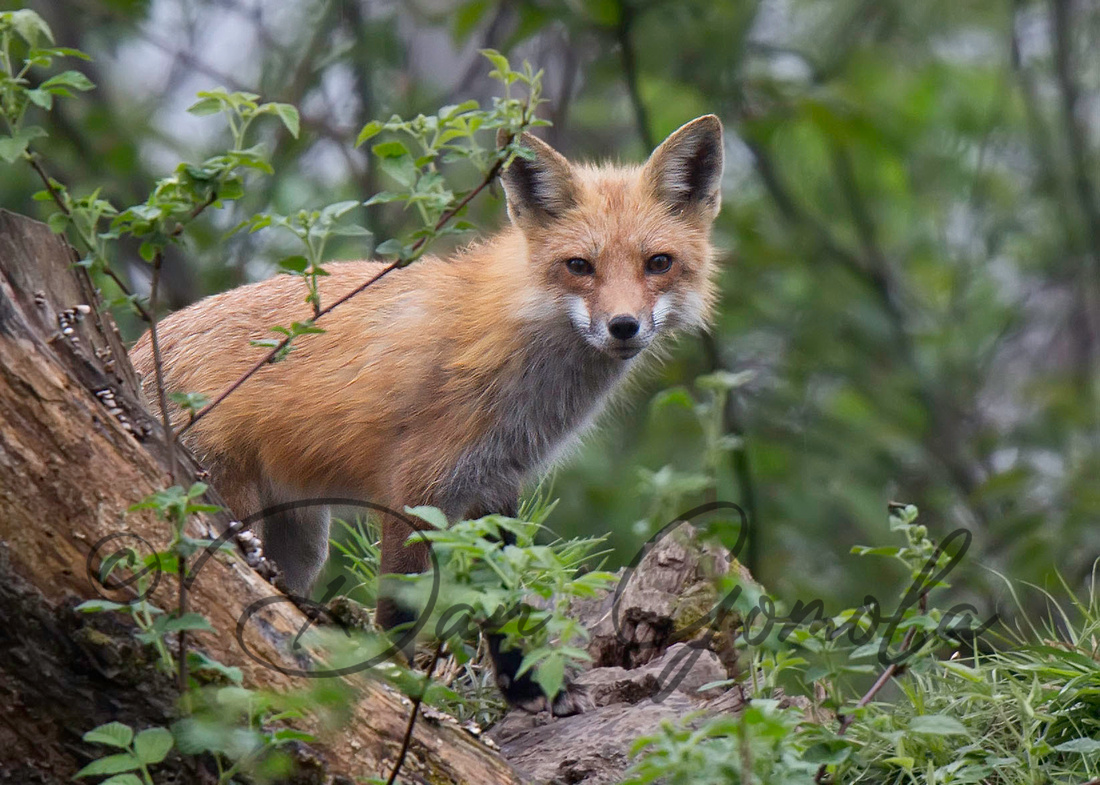 Eventually, one of the kits joined him on top of the den and tried to cuddle. 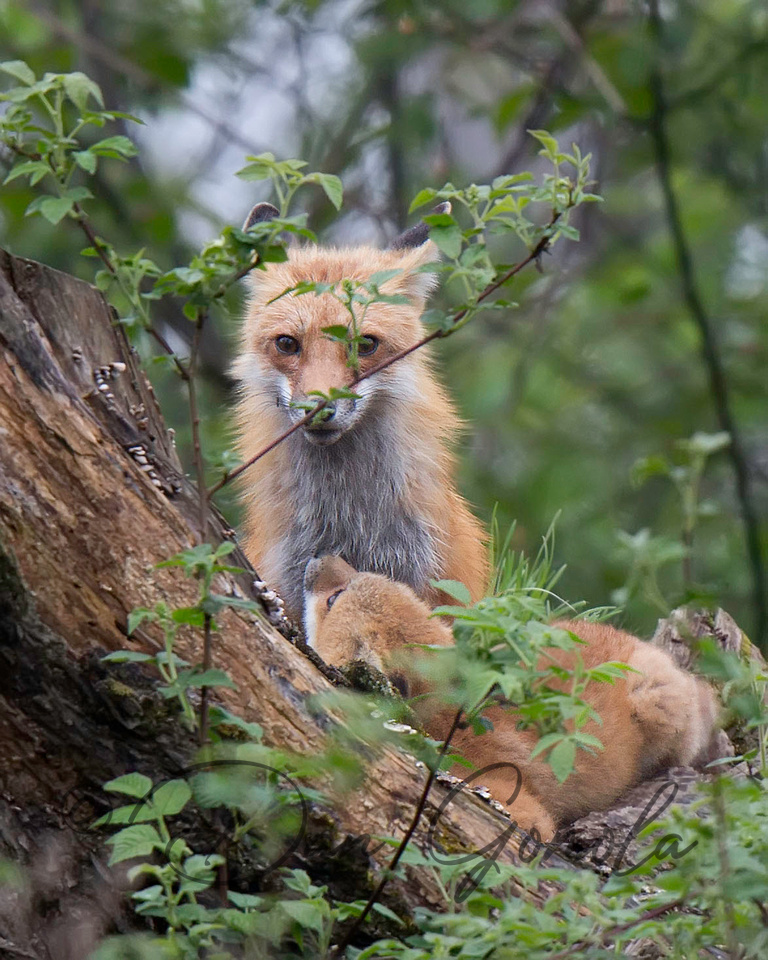 On another night, and the last time I visited, dad came in with food.  I was surprised to see a two course meal in his mouth.  Nature is beautiful yet can also be cruel.  Everything in the wild is part of a food chain.  Unfortunately for this young rabbit and vole, it was their time. 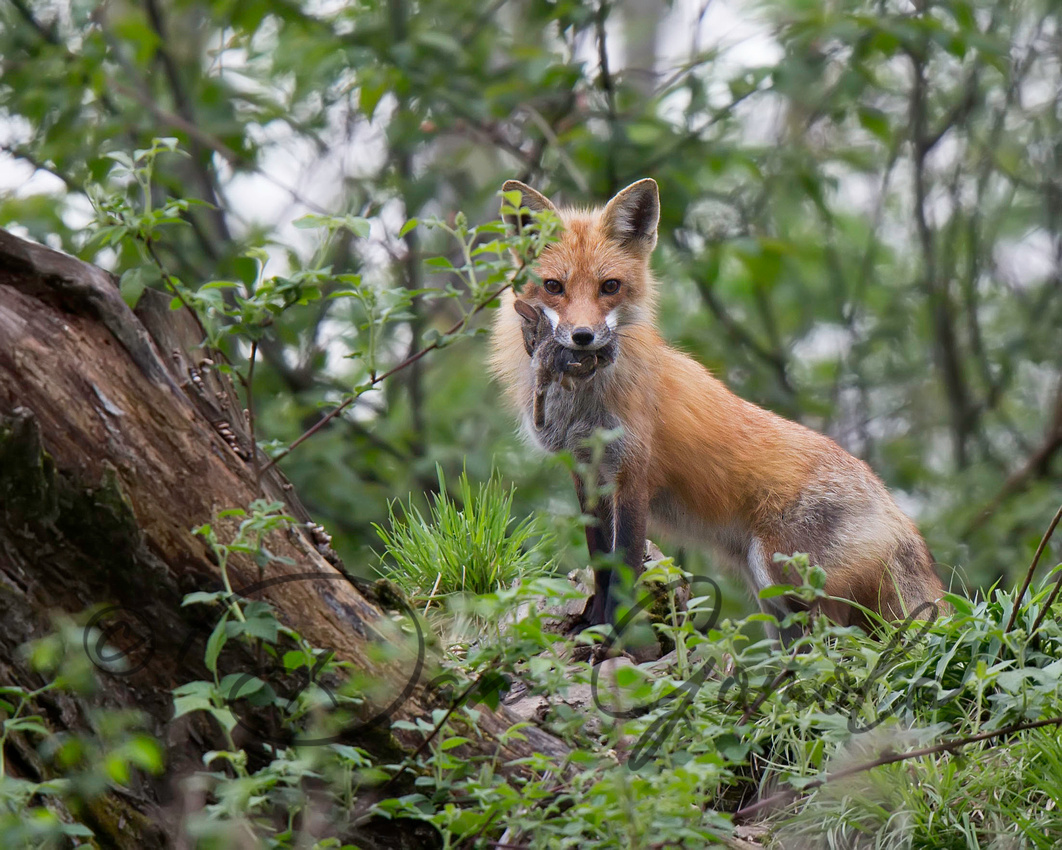 The day after the previous photo was made, the workers on the pipeline came back to excavate and seed the area they destroyed last year.  After that disturbance, the foxes were not seen for a week.  I feared they relocated but they are back.  When I get more photos, I will be sure to share.

Willard Hill(non-registered)
What a great experience and wonderful photos. We had a situation like that on our farm two years ago, but unfortunately they left before I got good stills of them. I did get some decent video.
Mary Stear(non-registered)
Love the photos and the story that goes with them. Looking forward to many more. Great job!
June Lucas(non-registered)
Another thanks a million, Dan, for these wonderful photos. Wish there was a Rent a Fox store so I could get rid of my rabbit infestation that's ruining my garden!
Mary McHenry(non-registered)
I always LOVE looking at all your photos! You are very talented!
Donna Mohney(non-registered)
Another great blog post and as always, I love the photos! But I especially enjoy the education you give us about the animals
No comments posted.
Loading...
Subscribe
RSS
Recent Posts
Great Smoky Mountains: My Cades Cove Experience (2021) - Part Three Great Smoky Mountains: My Cades Cove Experience (2021) - Part Two Great Smoky Mountains: My Cades Cove Experience (2021) - Part One Sandhill Crane: New Life in a Western Pennsylvania Marsh White-tailed Deer Favorites of 2020 Big Bulls and Hot Cows in Elk Country Unpredictable Pennsylvania Sparrows: Henslow's and Clay-colored 2020 Warbler Wrap-up No More Warbler Neck Loiusiana Waterthrush - Stream Lurker
Keywords
White-tailed Deer bald eagle American Elk Benezette Common Yellowthroat Lake Arthur Moraine Great Blue Heron Wood Duck Yellow-rumped Warbler
Archive
January February March April May June July August September October November December
©Dan Gomola
Powered by ZENFOLIO User Agreement
Cancel
Continue