The Spring waterfowl migration seemed to go so fast.  I still have some photos I didn't share so I collected them together to make up this photo blog.

I love hanging around a marsh on a crisp March or April morning watching for various species of waterfowl to come within photography distance.  Here is a pair of American Black Ducks.  One way to distinguish the male from the female is the male's bill is bright yellow while the female's is an olive green color. 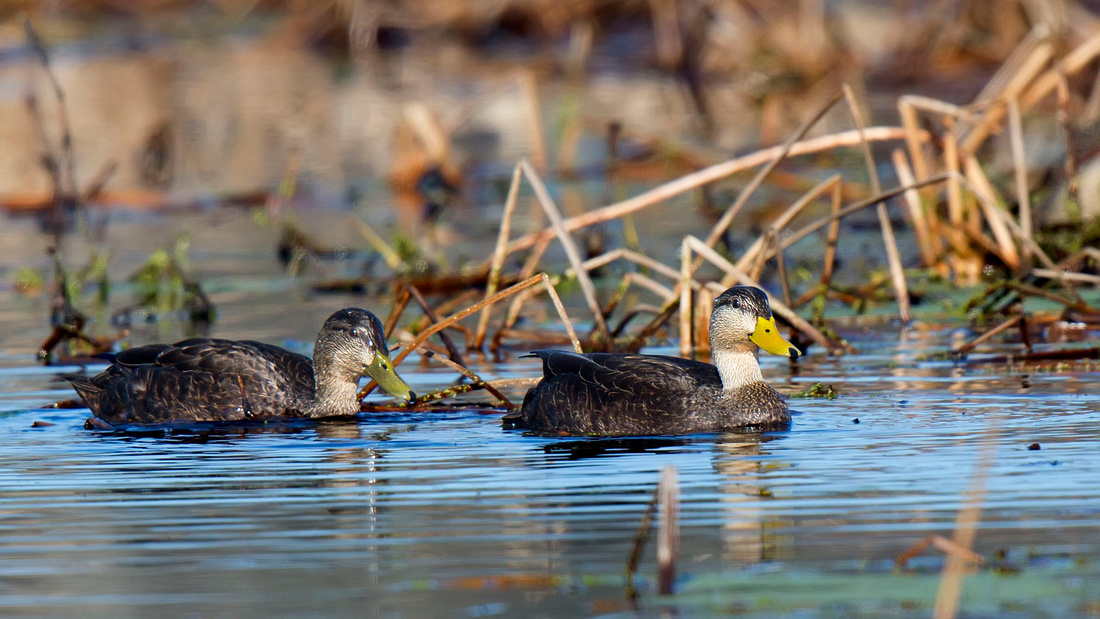 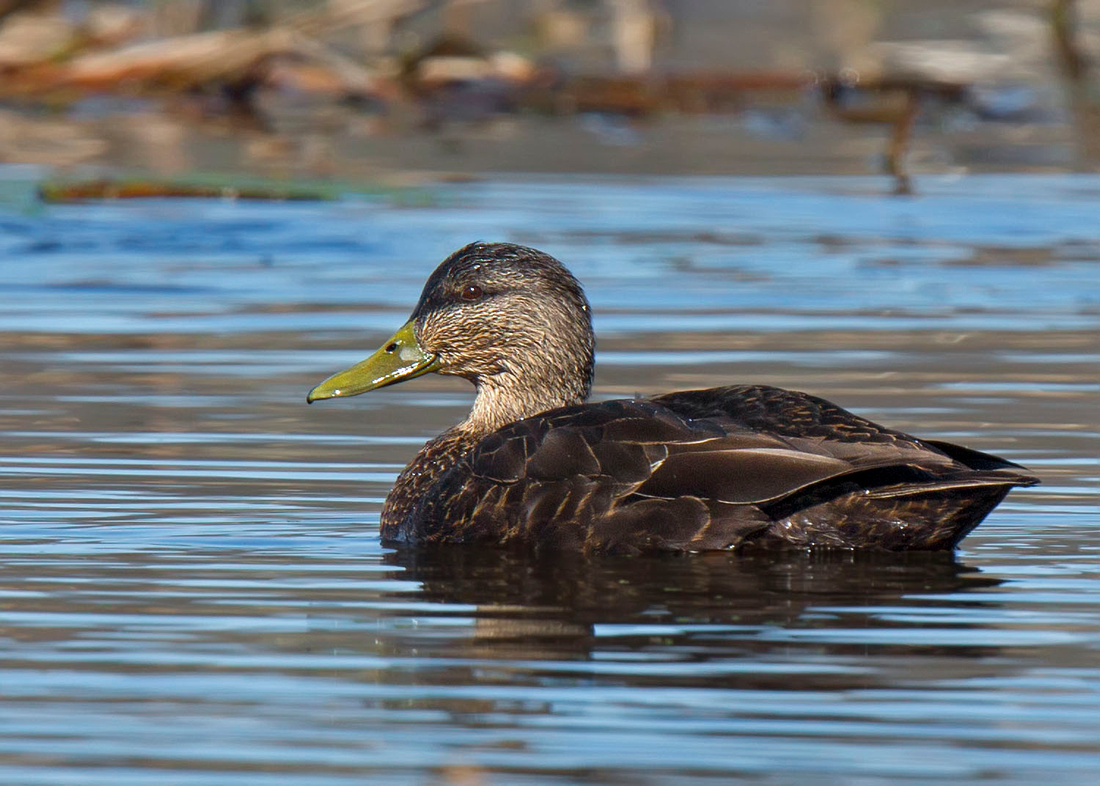 It was just a few years ago when I saw my first American Wigeon.  I got a few nice portraits last year but this year I didn't find any close enough.  They were close enough to get a few nice photos.  The distinguishing marking of a male is the white forehead and the green swipe extending back from his eyes. 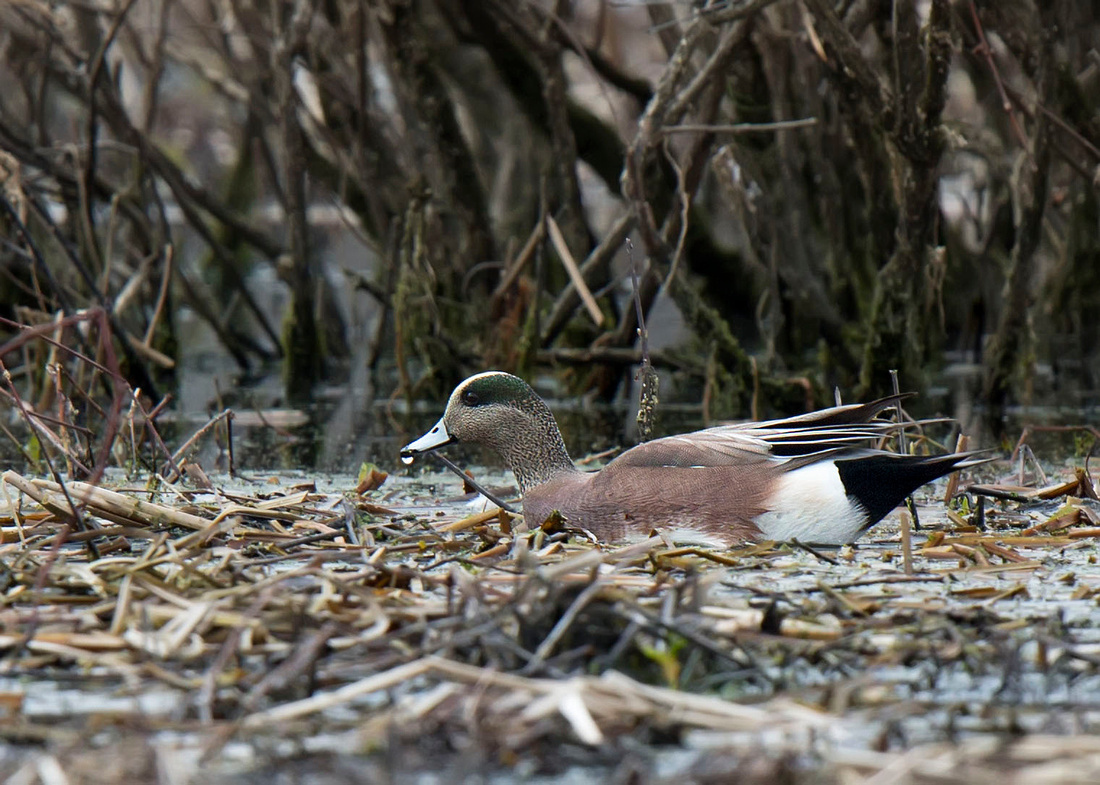 Here a male and female American Wigeon forage through the pond weeds. 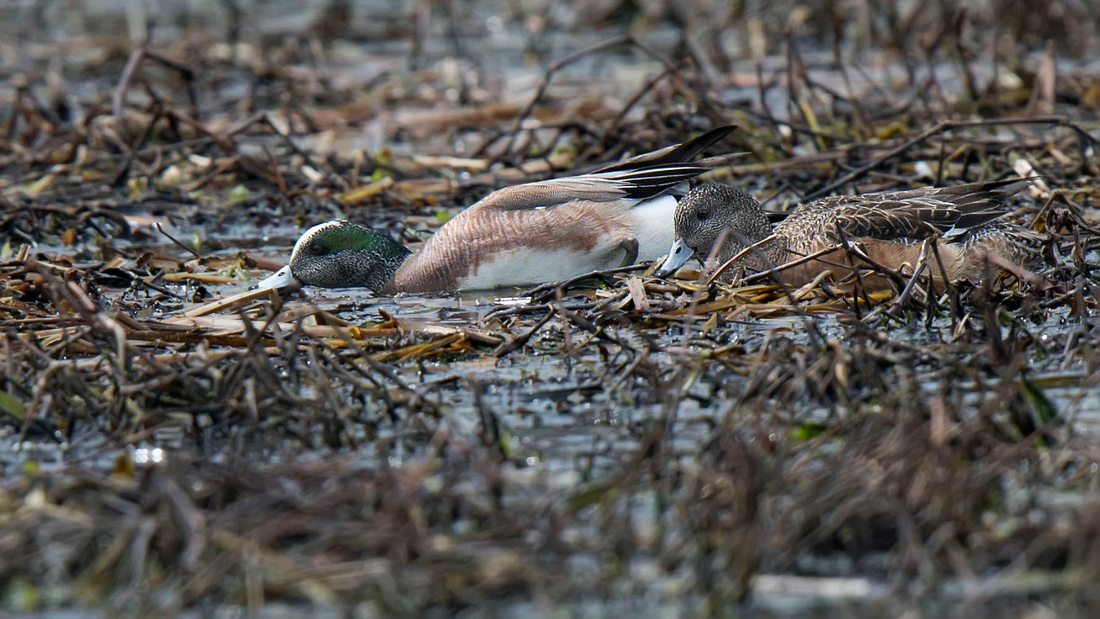 Even though she lacks the green and white head pattern of the male, she is still a beautiful duck. 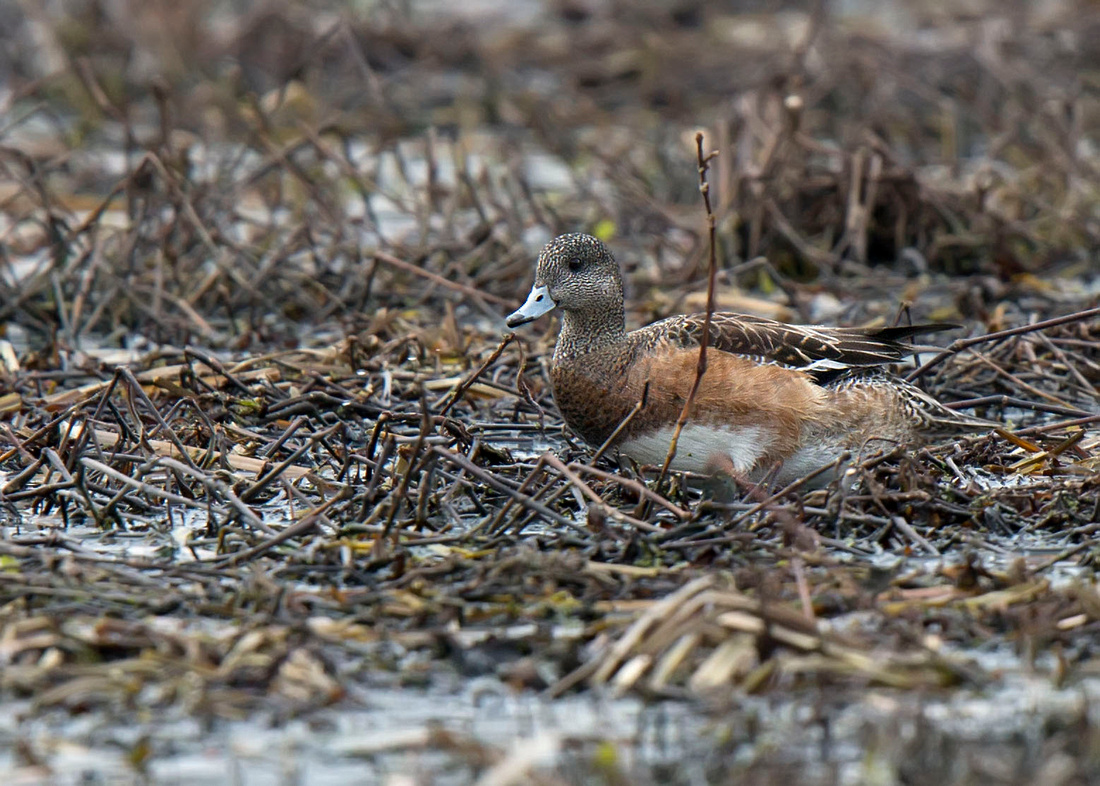 A buddy of mine, Jake Dingel, and I went out early one morning, toting our gear and blinds, heading for a flooded marsh to wait for waterfowl.  We saw several Wood Ducks that morning but we also saw a few Blue-winged Teal.  I didn't get an opportunity that morning to capture one with his wings stretched, displaying the coloration that gives them their name.  This guy swam by in some beautiful light.  Note: I'm not posting any of the Wood Duck photos right now because I am preparing a special photo blog on the Wood Duck for late summer.  I don't yet have all the photographs I see in my minds eye. 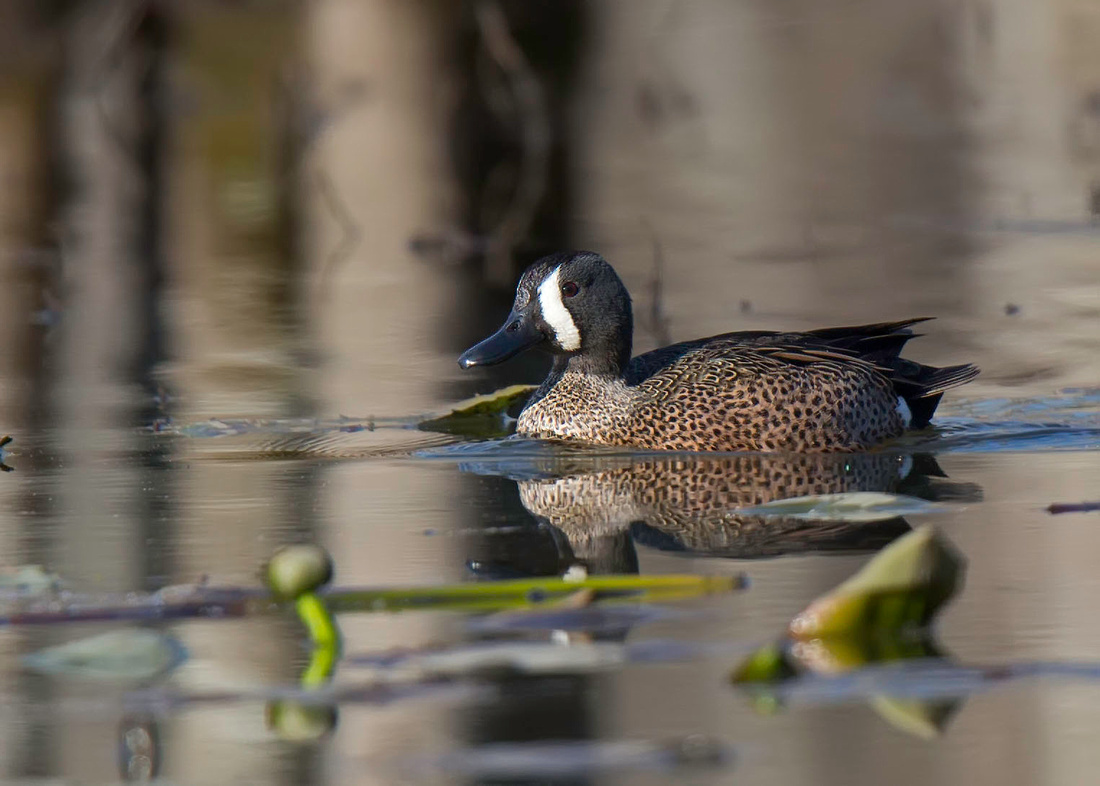 Although there were other ducks around, I love the "calming" look of this photograph. 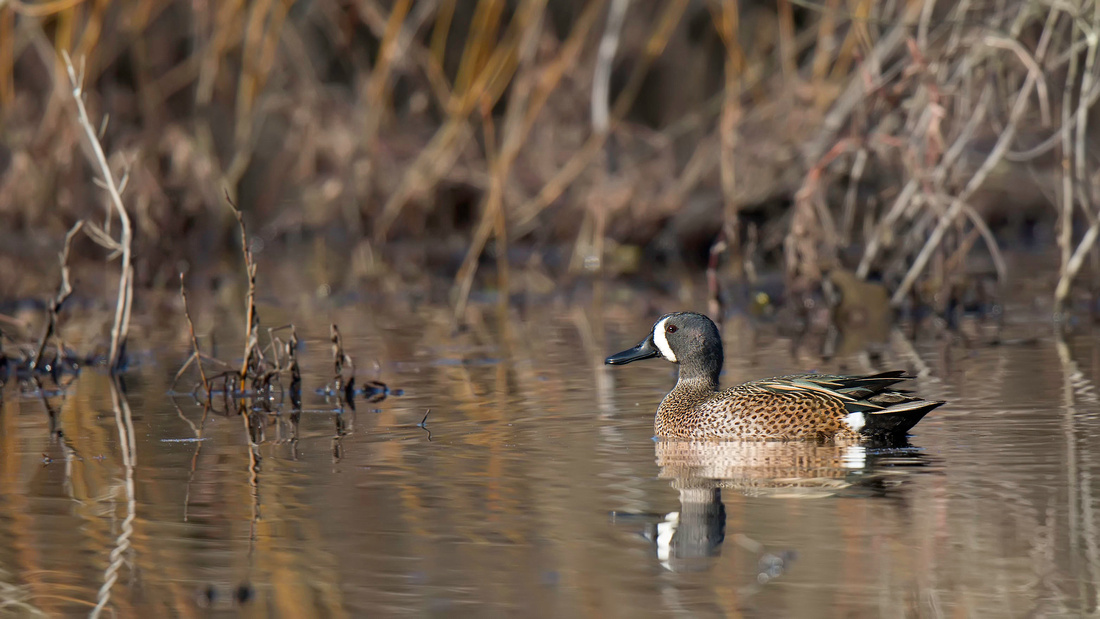 It was nearing noon one sunny day when I was heading home from the Pymatuning area when I saw a lot of ducks on the water near the docks of Conneaut Lake.  The light was very harsh yielding a lot of silhouettes.  In the short time I was there, I was lucky to capture the iridescent colors of the Bufflehead's head. 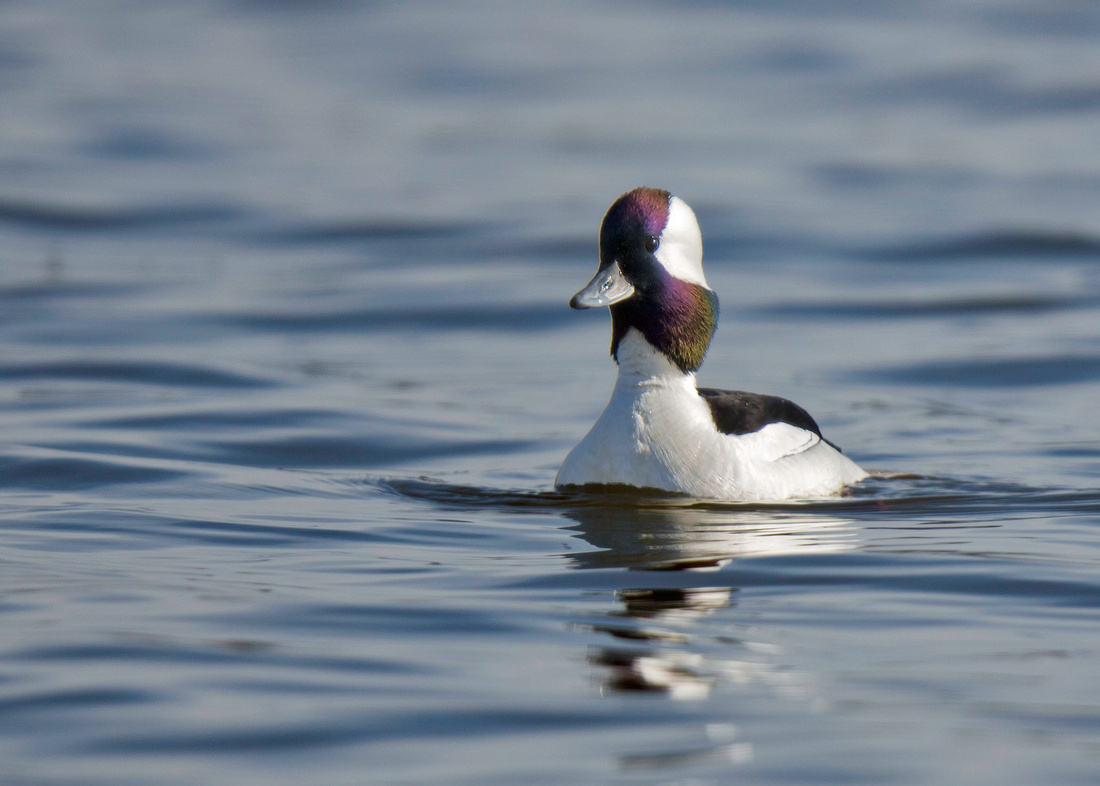 I don't know why so many beautiful birds have to be labeled as "common".  But they are!  This one is a Common Merganser.  Occasionally, I'll find a Common Merganser pair all alone but usually they congregate in large flocks on the water. 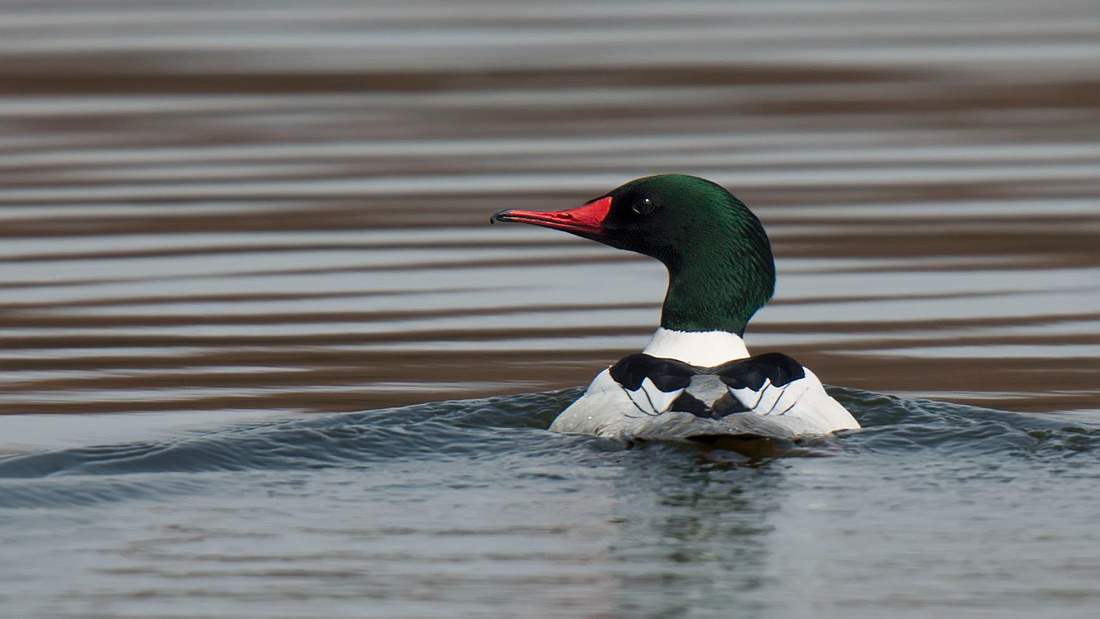 They are a very suspicious bird too.  Unless they swim up on me while I'm in a blind or otherwise well hidden, I  usually see them fly away.  I love how they fly so close to the surface of the water. 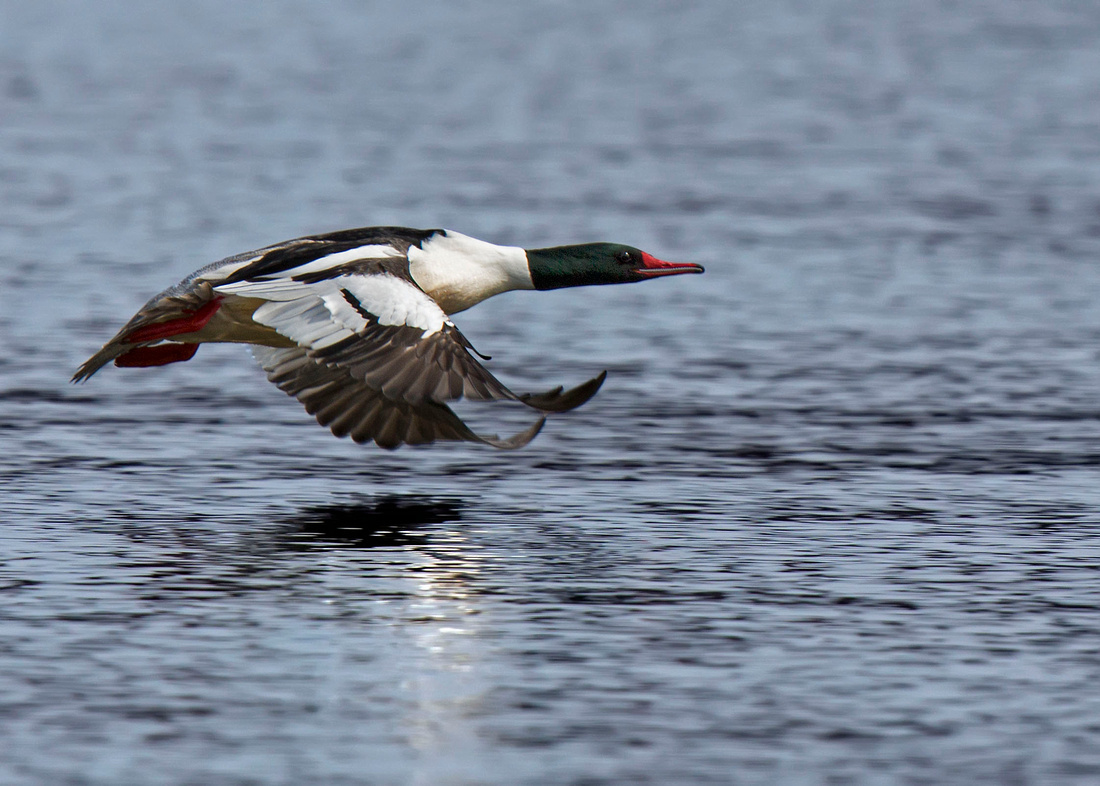 The Green-winged Teal is another duck with outstanding colors and markings that has avoided my lens.  These photos were made from a great distance but within cropping range so I wanted to share.  Here are two males in the front and one female behind the male on the left. 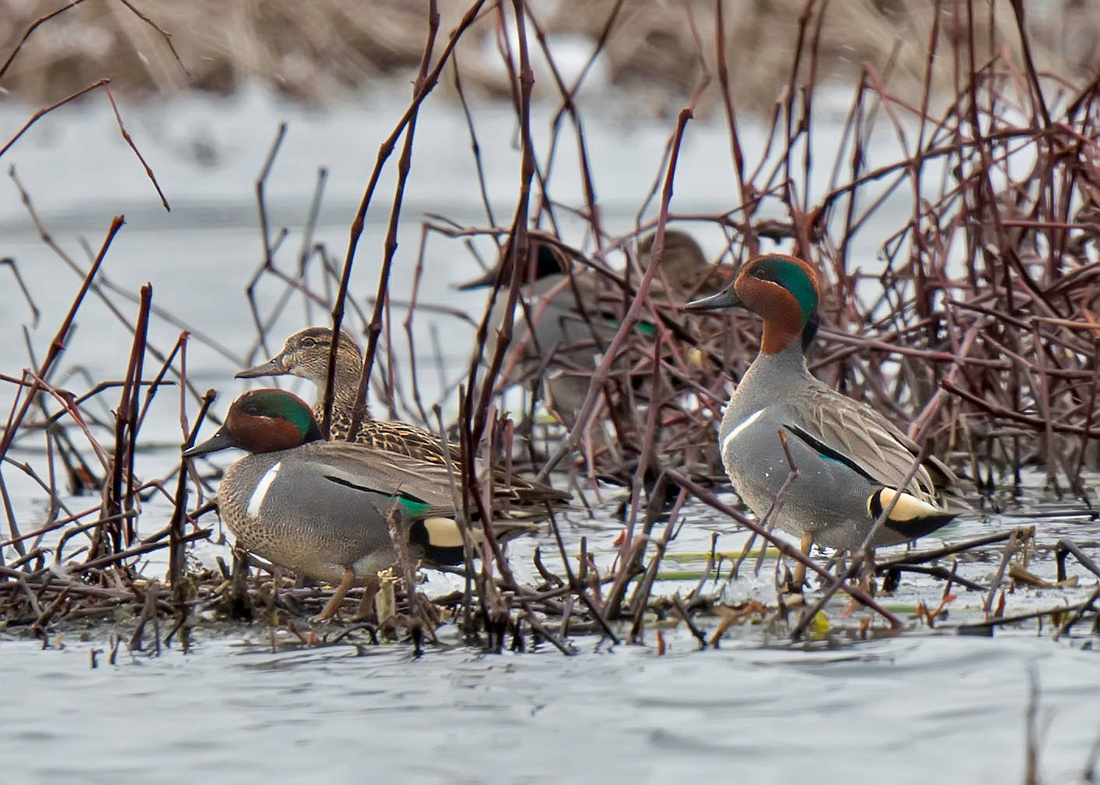 Here are a pair of Mallards.  These dabbling ducks were busy feeding the entire morning but they finally settled down and gave me a portrait. 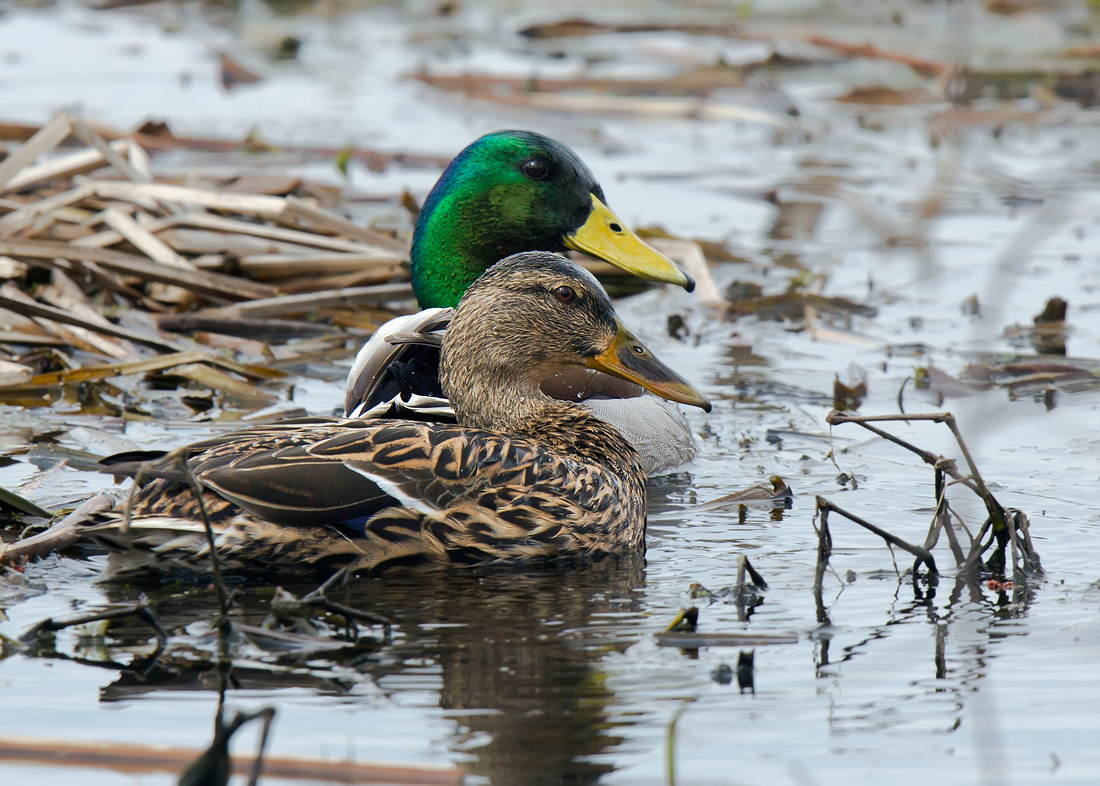 Here is a Wood Duck pair who just exited from the water.  The Wood Duck will spend a lot of time out of the water and actually nest in cavities in trees, sometimes far from water.  Enough of that, you will find out more about Wood Ducks in the late summer photo blog I mentioned earlier. 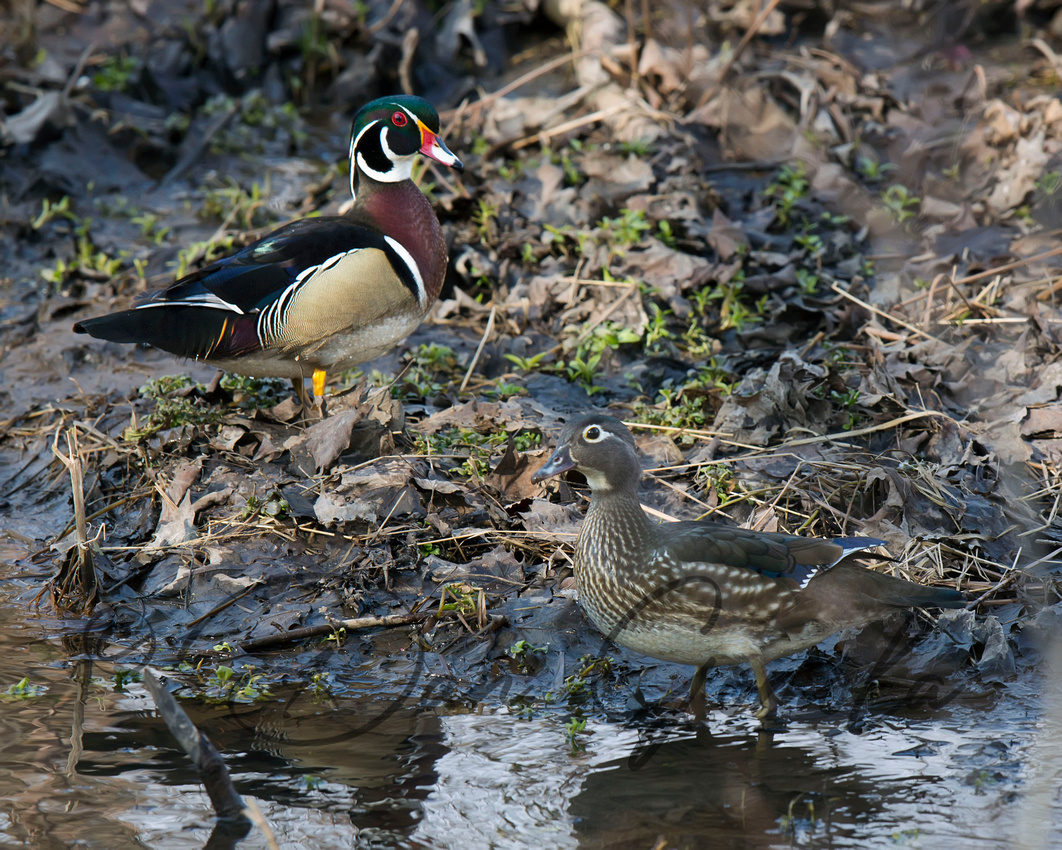 The Latin genus name for “grebe” means “feet at the buttocks”.  It is a perfect descriptor for the Pied-billed Grebe, whose feet are located near their rear ends.  This body type, a common feature of many diving birds, helps grebes propel themselves through water. Once again, we use the word "common" but the Common Loon is anything but common.  Certain lighting reveals a deep green color in their heads.  It was mostly cloudy the day I made these loon photographs but I tried to align myself in order for the light to pull some of the green out of the green-black feathers. 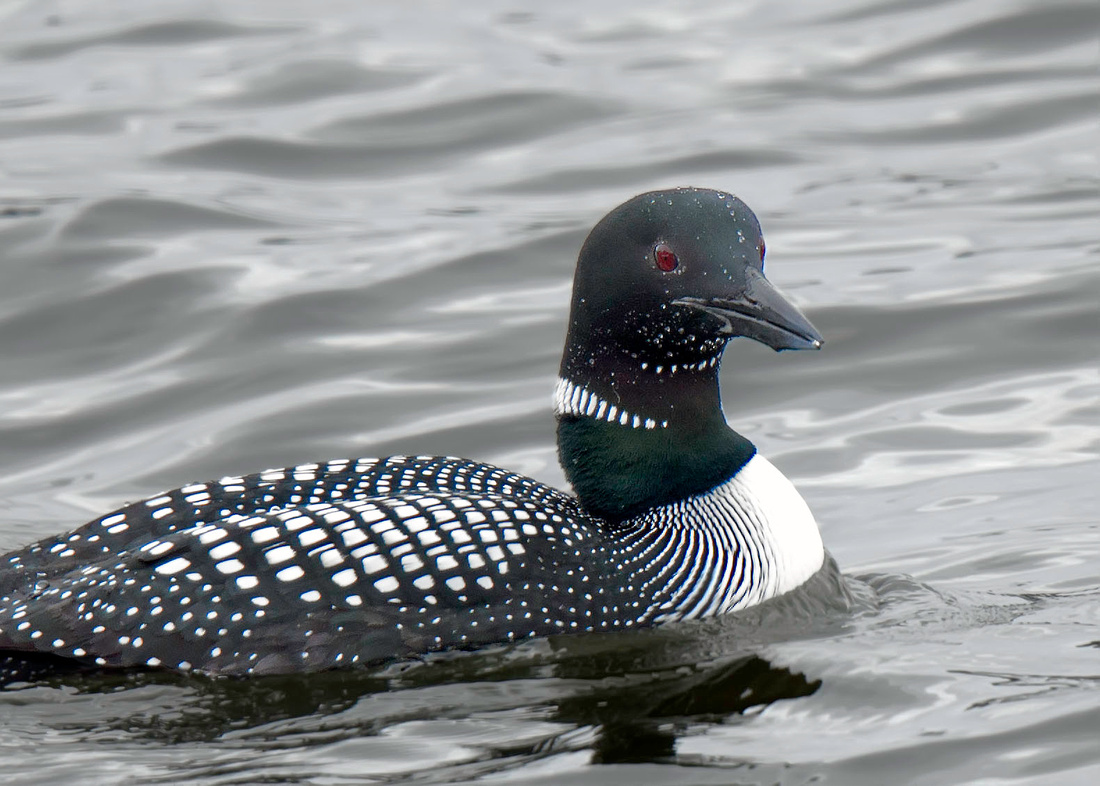 Loons are diving birds too and spend most of their time on the water.  The term "loon" is thought to be derived from the Scandinavian word lom, which means "clumsy person", in reference to their clumsiness on land. 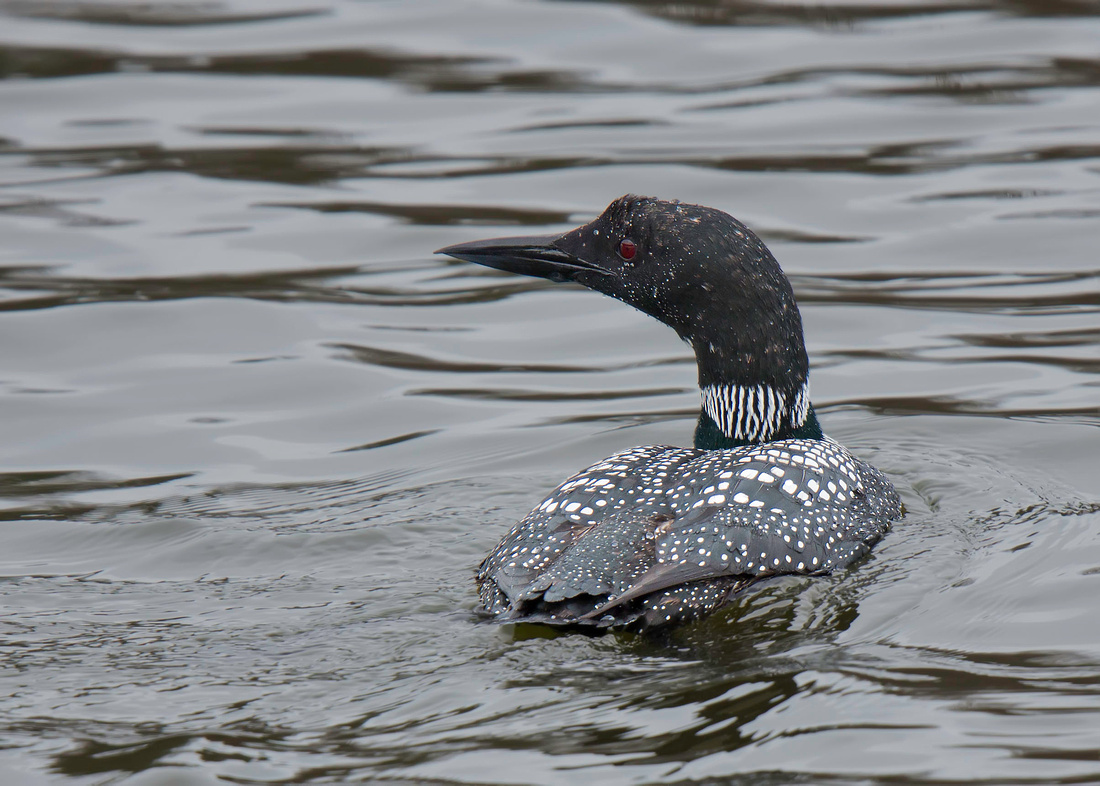 It is fun to watch a loon dive and predict where it will surface.  Unfortunately for me, every time one came close to me, it would dive and resurface 100 yards away.  That doesn't help to make a good photograph. 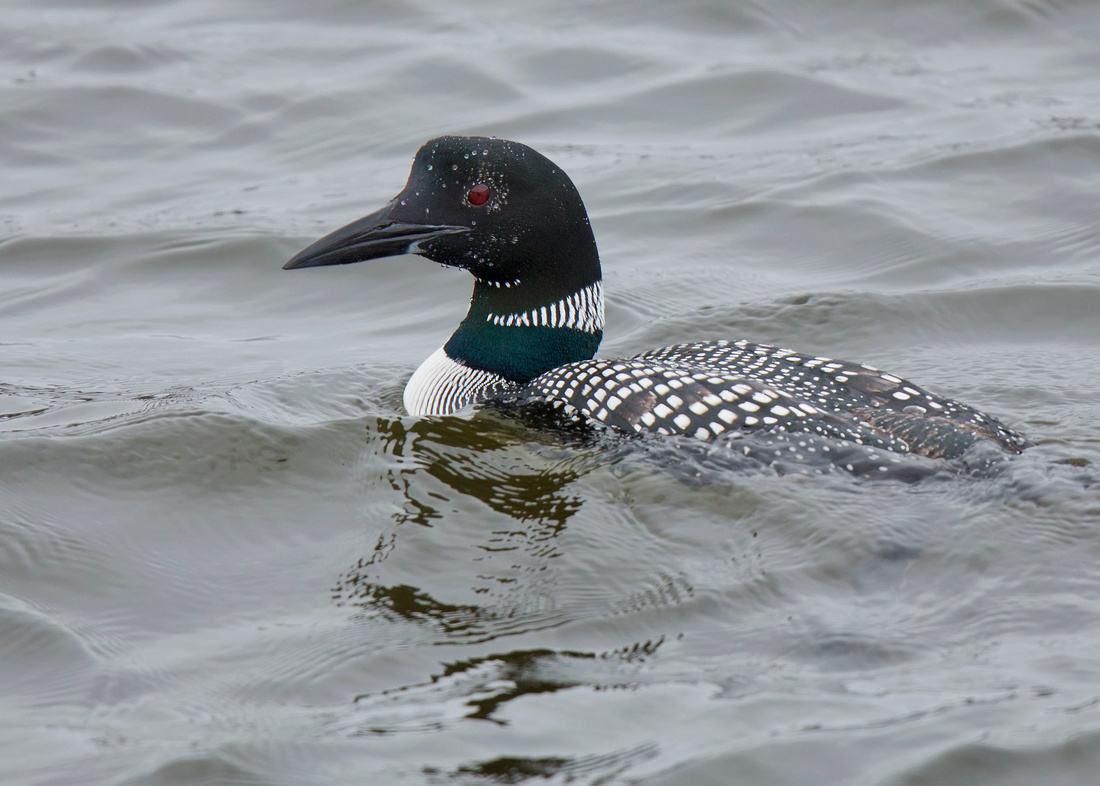 I hope you enjoyed my waterfowl migration wrap-up photo blog.  I'll be posting again soon to share other spring wildlife before I begin to write about the spring songbird migration.  In nature, there is always something to photograph.