Big Birds Through My Lens

We’re coming up on the end of April and the migration of songbirds is on my mind.  Within a couple weeks, I’ll be spending a lot of time along thickets and forest edges watching for the colorful songsters.  In the meantime, I have several photos I made within the last month that I need to share.  In this photo blog, I’m going to focus on the opposite of tiny songbirds and share photos and information about some of our big birds.

They are big, but sometimes you don't see them.  That's one of the aspects of wildlife photography that I love.  I get to share wildlife with people who don't get to see for themselves.  Let’s begin with the Osprey that we welcomed back into our state this month.  It didn’t take long before they began building and mending nests and some are already incubating.  In most cases, I find it difficult to get very close to an Osprey as they seem to be apprehensive.  I found this one on a very windy, overcast day and although I was only about 40 yards away, it didn’t seem to mind. 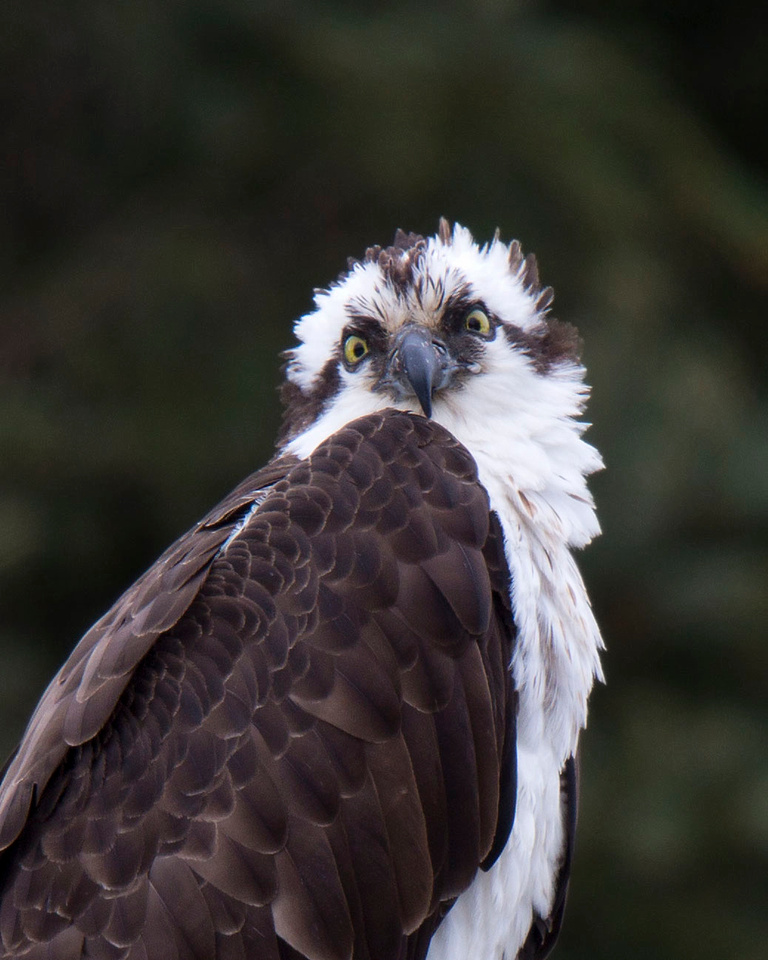 I watched it so long that I was actually hoping it would fly soon.  Finally, I got my wish.

I seldom see an Osprey’s seven feet of open wings so close-up and detailed.  What an awesome sight. 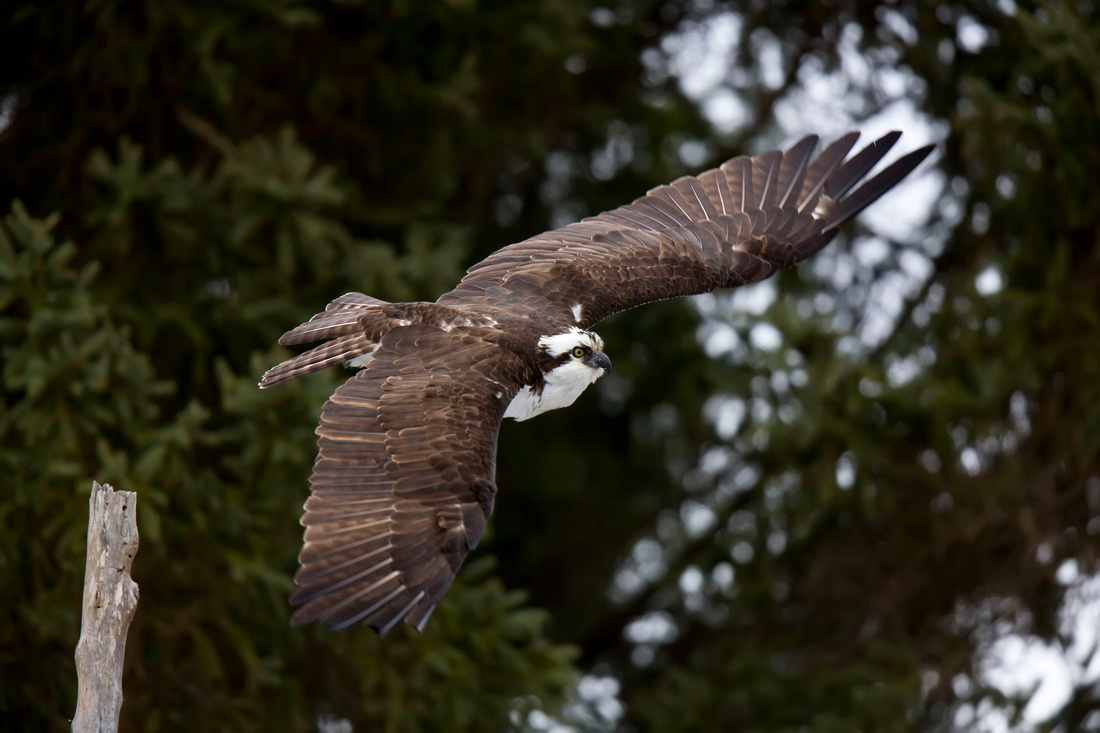 The Osprey, otherwise known as fish eagle, sea hawk, river hawk, and fish hawk, is a fish eating bird of prey that is often seen soaring above our lakes. 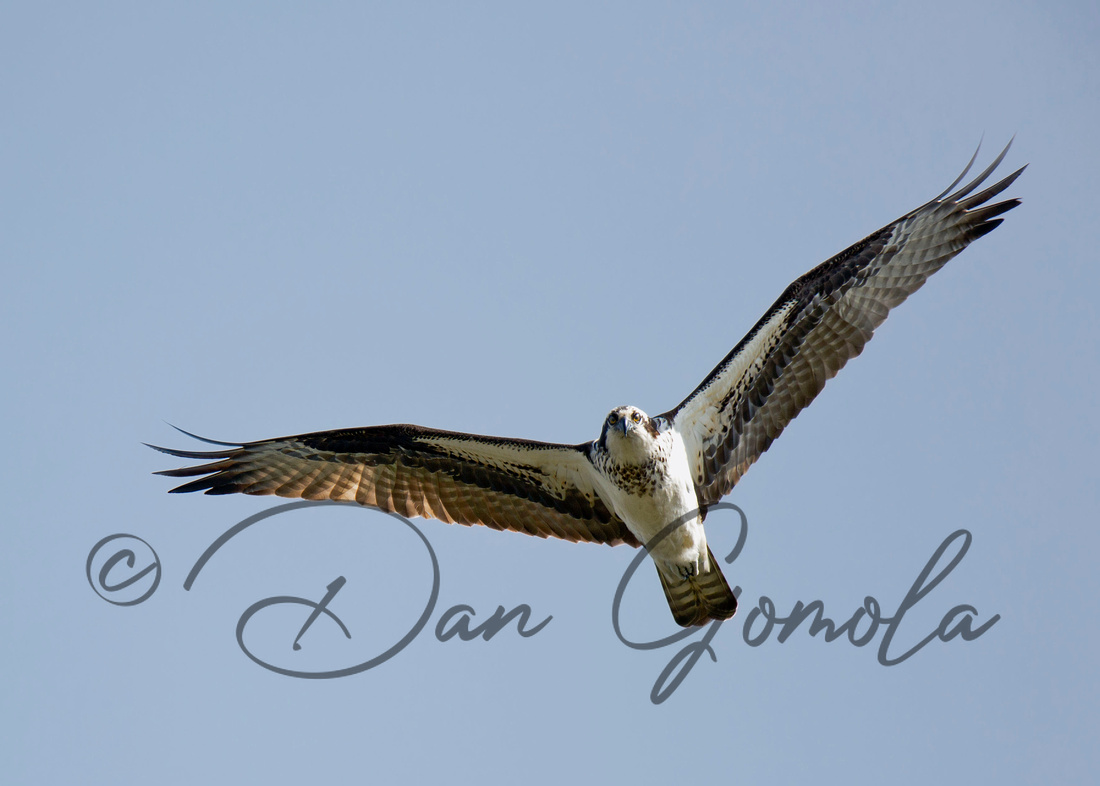 One evening, as the sun was nearly set, I found this lone Sandhill Crane in a field.  Sandhill Crane are about 47 inches in length and have an approximate 78 inch wingspan. 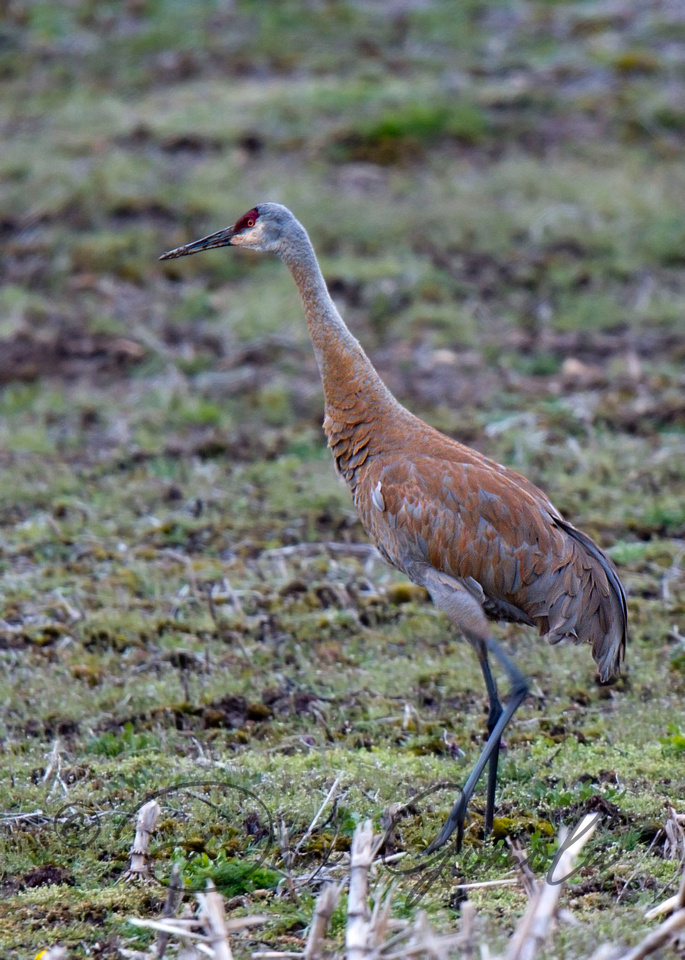 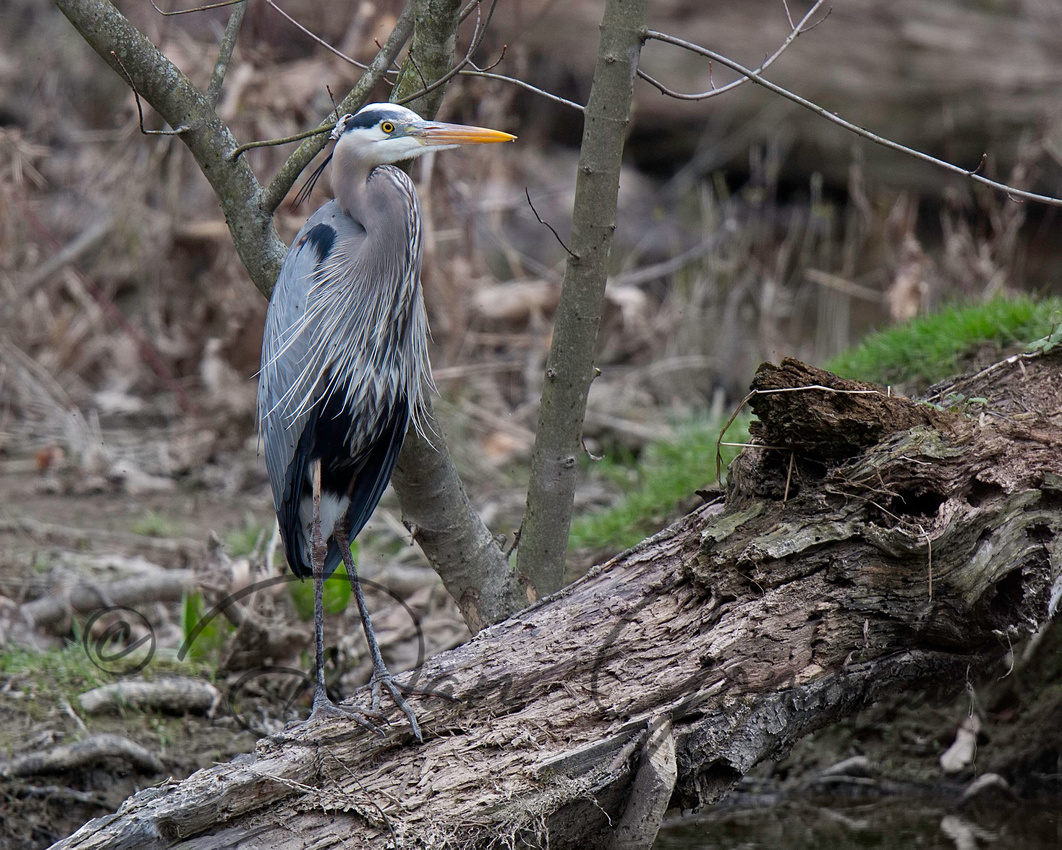 As you've seen in my past photo blogs, the Bald Eagle is a big bird.  I found this one perched, giving its foot a rest, in mid-afternoon. 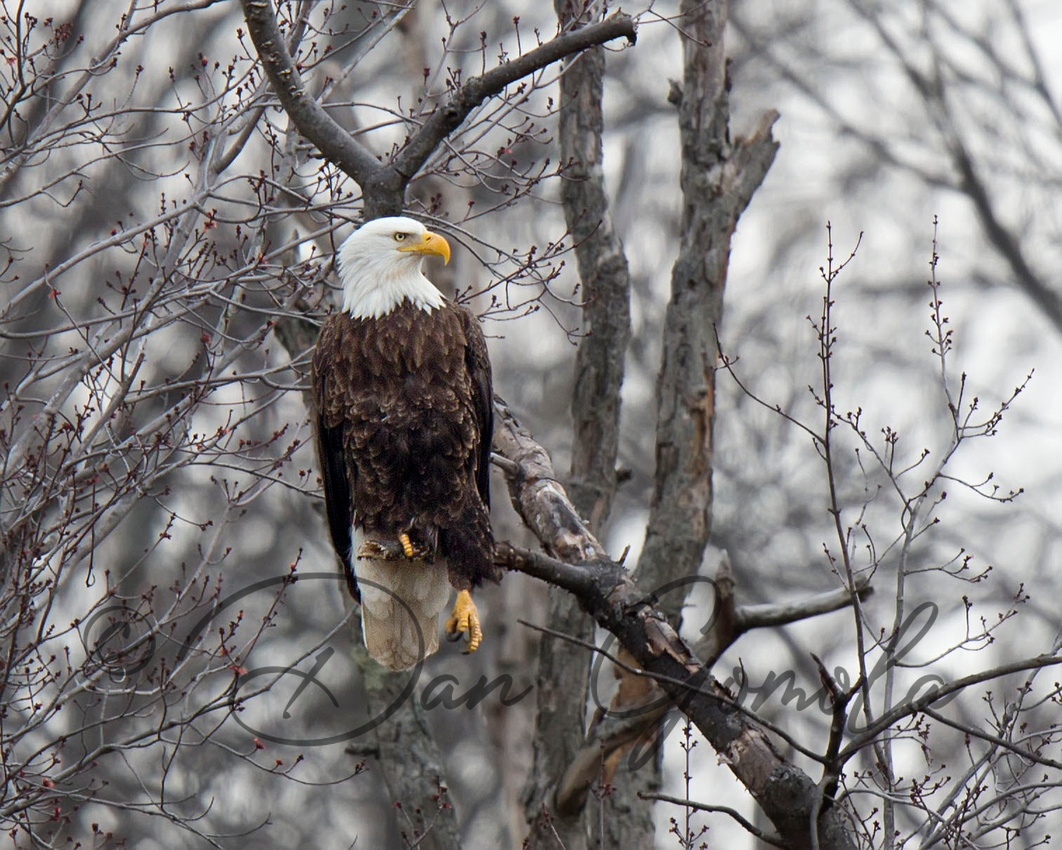 Looking majestic in that beam of sunlight. 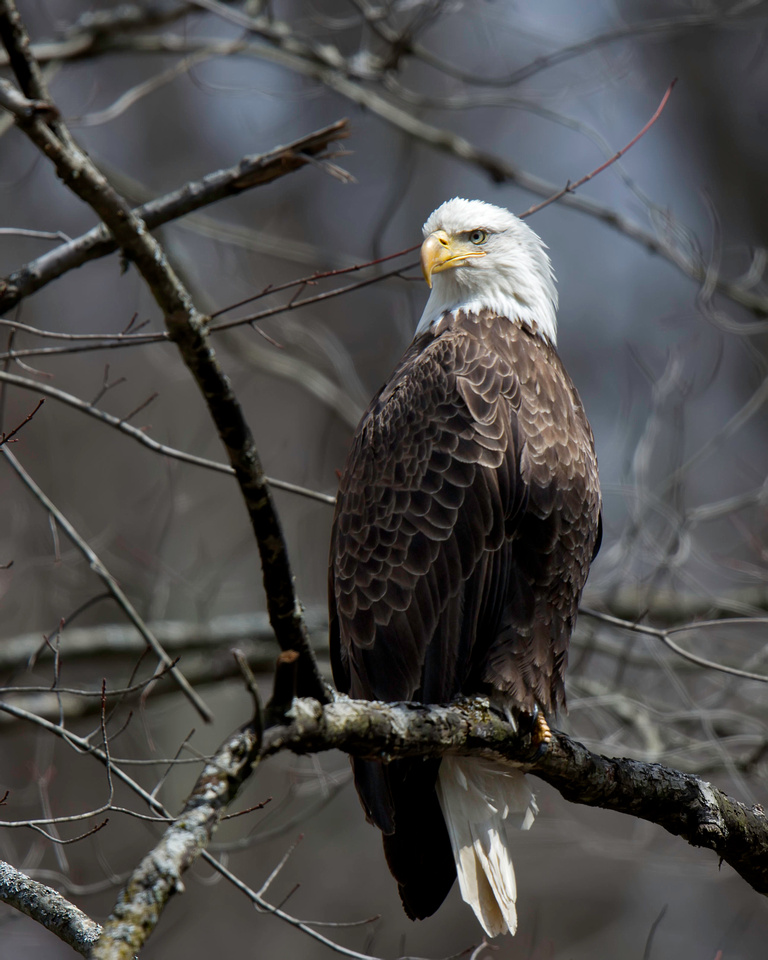 Eagles do not have sweat glands.  To cool themselves, they open their mouths and pant.  They also will hold their wings out from the body to let the cool breeze get closer to their hot 107 degree Fahrenheit body.  In the next photo, you can see all four eagles panting to remain cool. 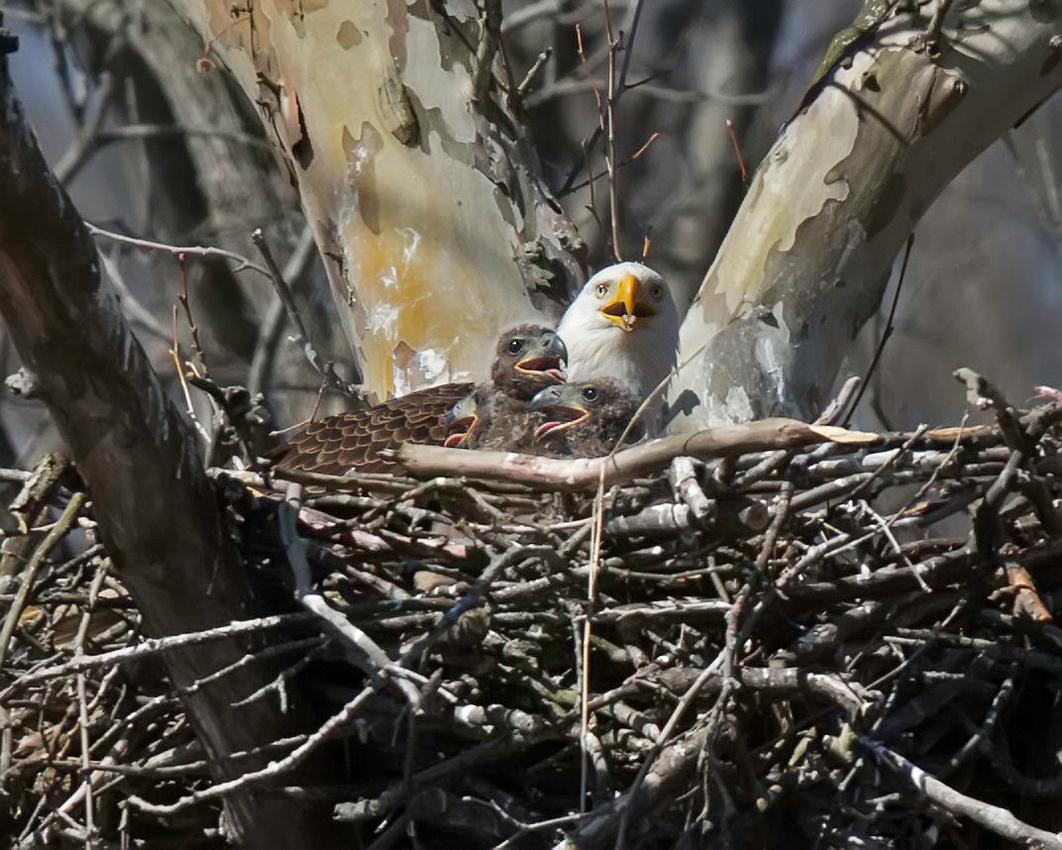 The popularity of web cams mounted above birds nests have brought us all "into the nest" of nesting birds such as the Bald Eagle.  There was a photo from the Pennsylvania Game Commission during the winter of 14-15 that became popular around the United States.  It showed a female Bald Eagle, near Hanover, PA, incubating eggs during a March snowstorm.  While the male stood next to the female, on the nest, all you could see of the female was her head rising above several inches of snow that blanketed the nest.  It showed the dedication, and caring nature, wildlife have when raising their young.  The photo below demonstrates a similar situation although not as severe.

I made this photo this month on a day that temperatures reached 80 degrees.  As I mentioned above, eagles will spread their wings slightly to cool themselves but as I watched this nest for several hours, it became evident that she was spreading her wings for another reason.  The majority of the time, mom stood above the three eaglets with her wings positioned away from her body to shade the little ones.  Occasionally, one or two would come out from under the "umbrella" but only for short periods.  The instinct to protect their eaglets from the elements is simply amazing. 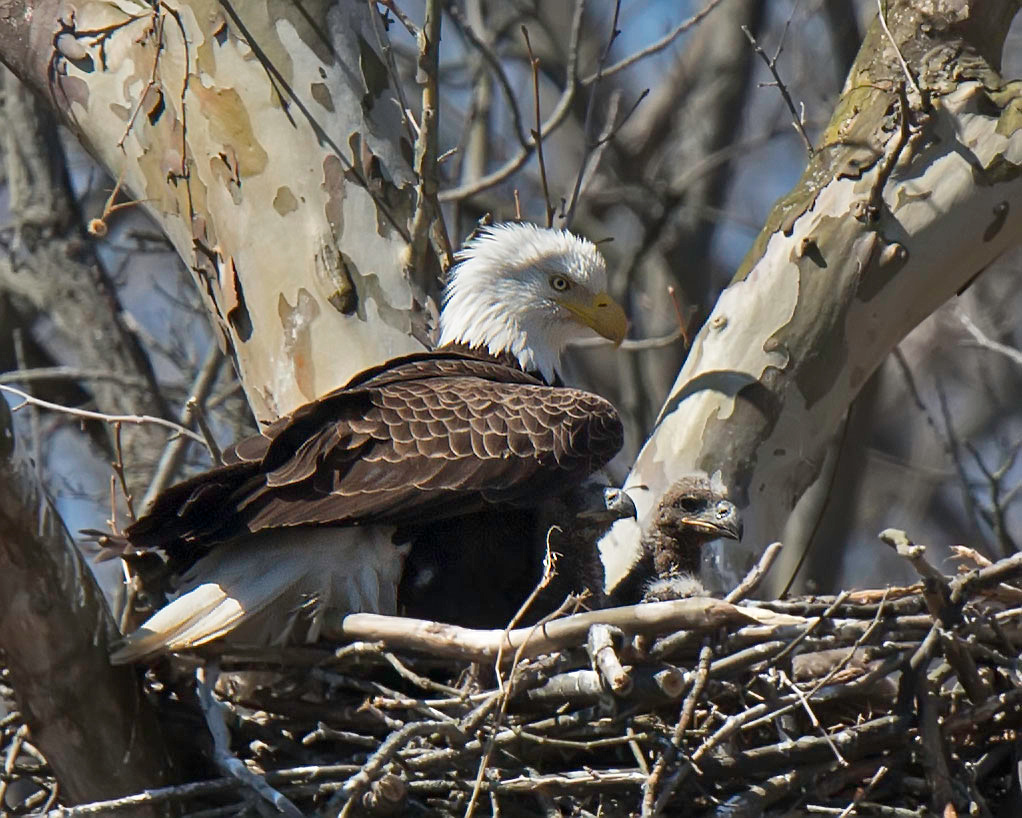 Once in a while a Red-tailed Hawk will sit still long enough for a photo.  Somewhat smaller than an eagle, the Red-tailed Hawk is 17.7–22 inches long and has a wingspan of 44.9–52.4 inches. 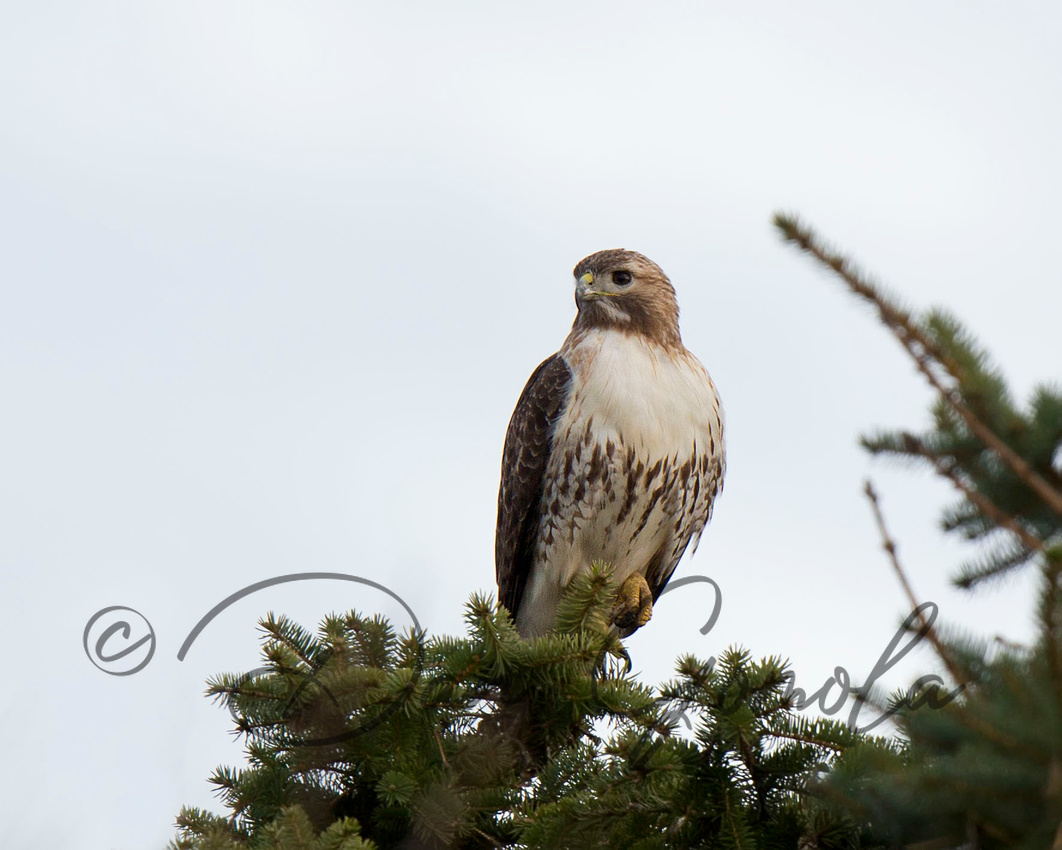 I have been fortunate this winter and spring to have some Short-eared Owls in the area.  Occasionally, they will come out of their roost before sunset.  I only saw that once this year and posted that photo in a March 14th blog titled "Late Winter Wildlife Encounters".  The next four photos of Short-eared owls were made after the sun slipped below the horizon so very high camera iso settings and slow shutter speeds were necessary. 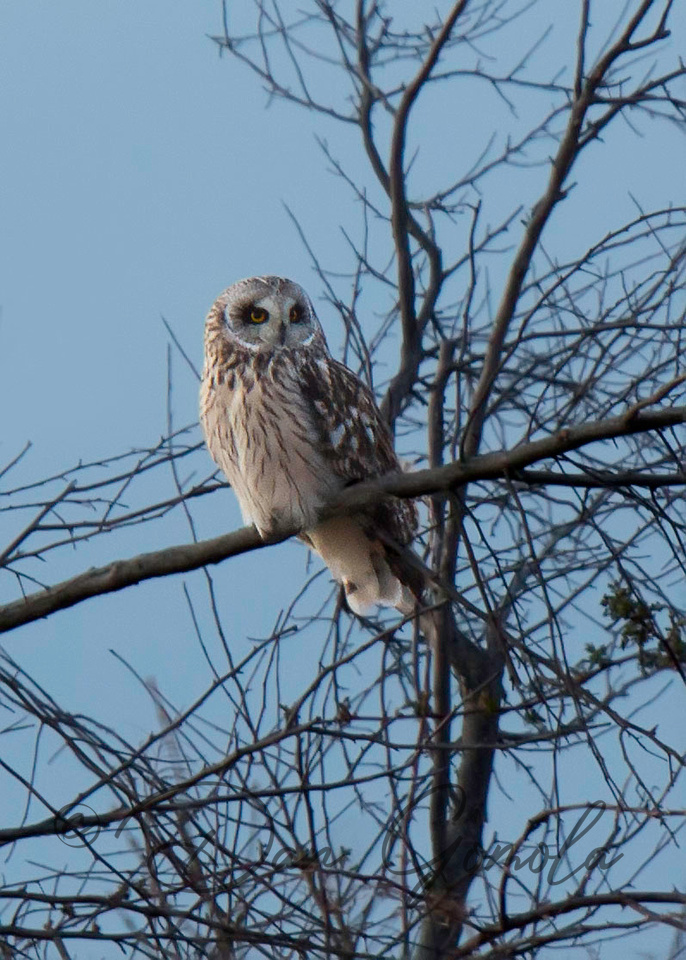 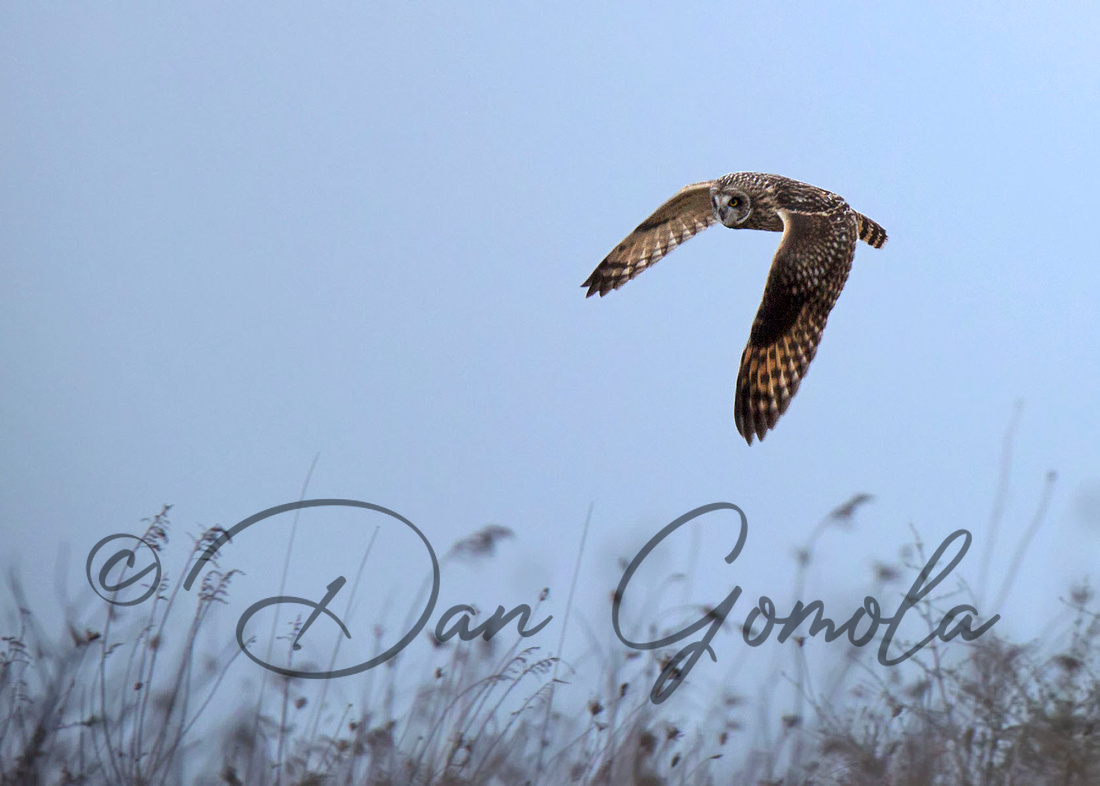 In photography, panning is a technique to photograph a moving subject by moving your lens in the same direction and pace while keeping the subject in the same position of the frame for the duration of the exposure.

I have to admit I did pretty good on this one.  I panned this owl flying right to left and got a couple good shots from the bunch. 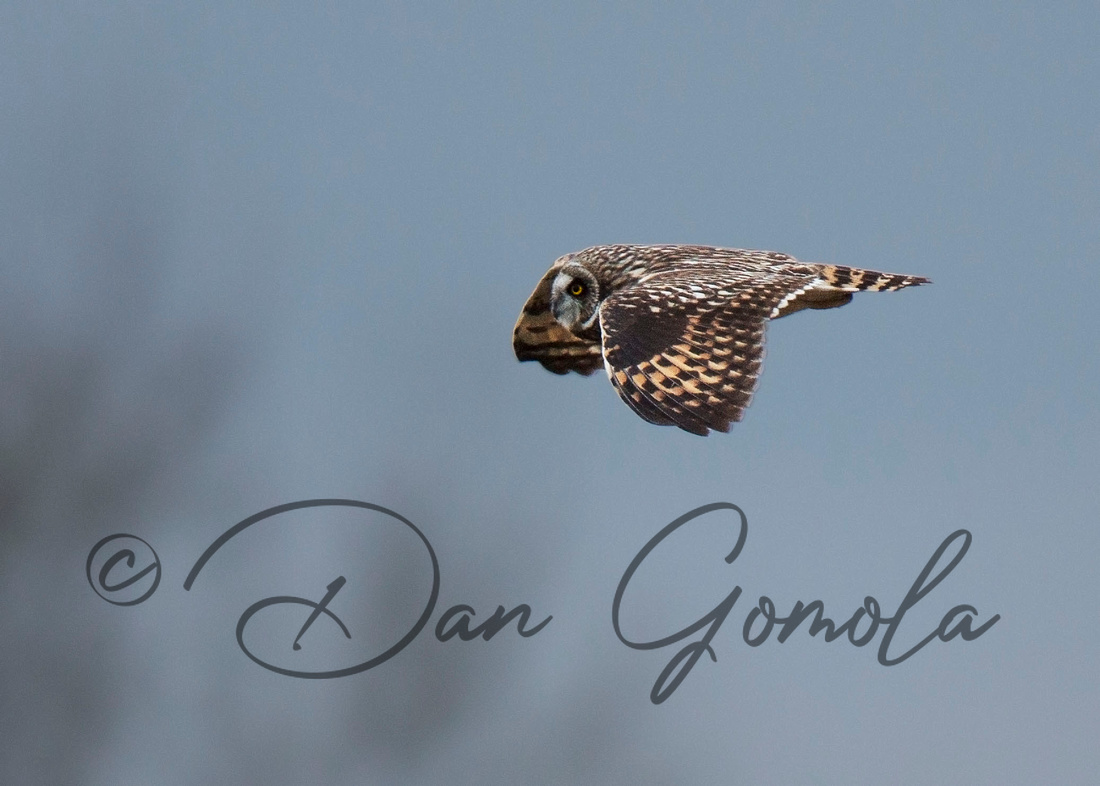 This Short-eared Owl was flying circles over the field directly in front of me.  I was so excited that I didn't even notice my shutter speed dropped to 1/15 of a second.  That is hardly adequate for a fast moving subject.  Upon reviewing my photos I nearly deleted the complete series without even looking at them.  They were all a blur; except the one below.  My only explanation is the owl must have hovered, in one spot, for a second or two for the camera to catch the face in focus.  I love the feeling of motion in the photograph. 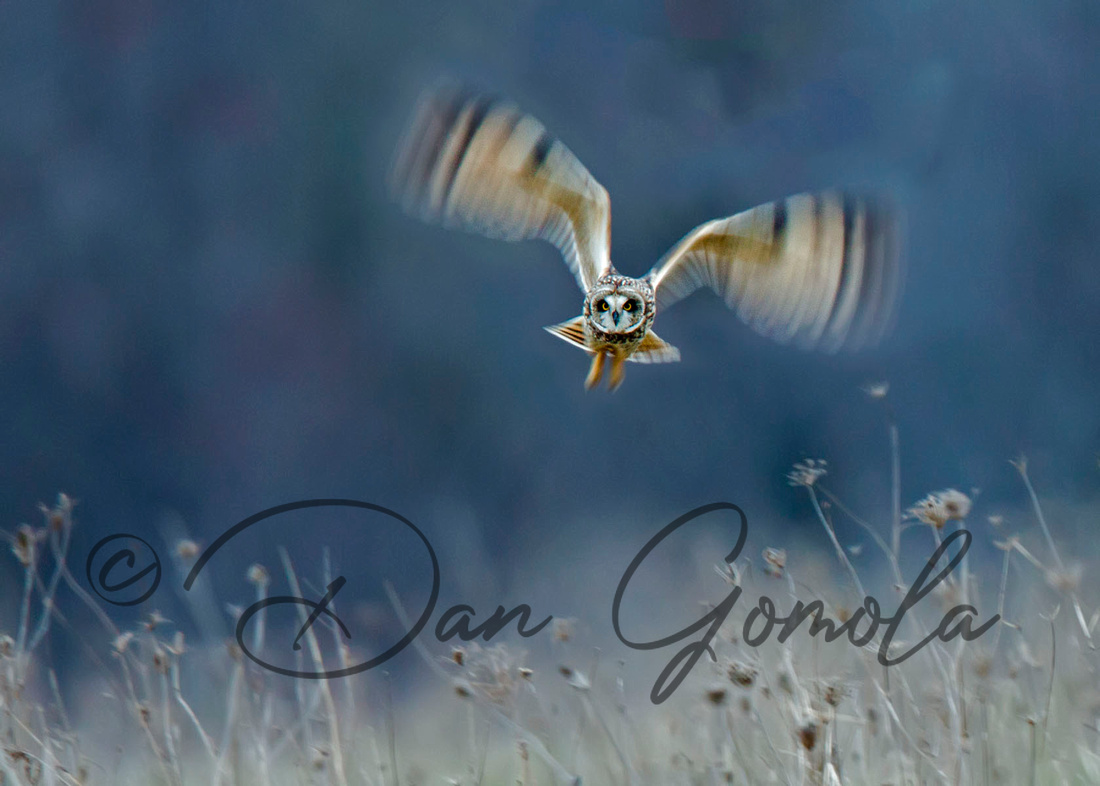 I was driving home one morning after sitting in a blind for three hours photographing waterfowl when I saw this Ring-necked Pheasant cock.  The pheasant is a large game bird in Pennsylvania and the tail is usually how it's measured.  Some measure by length, which can be over 24 inches, and some measure by the number of bars.  Personally, I only hunt with a camera so I don't care how its measured.  Just look at the colors on this beauty. 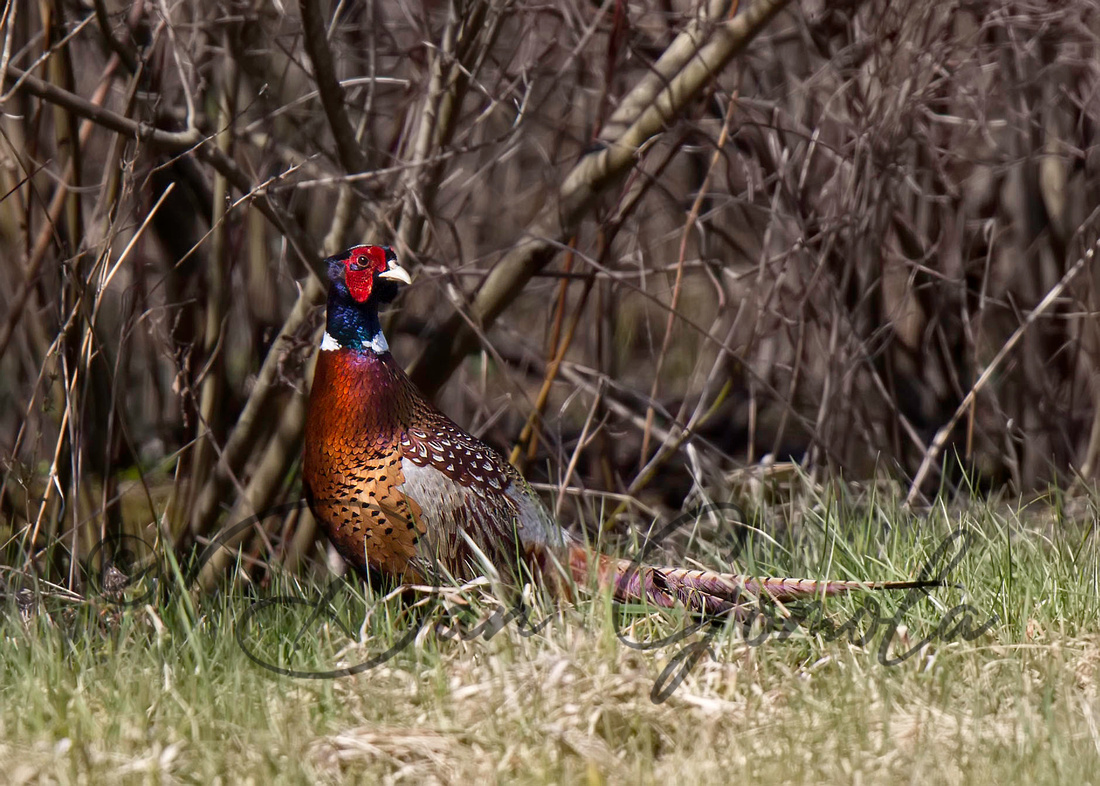 He had a hen just inside the thicket.  After a few minutes of me watching him and him watching me, he reared up, left out a series of crowing calls, and a hen took off and flew into the valley.  He then walked into the thicket.

The following video is a compilation of short videos showcasing the Osprey, Eastern Screech Owl, Barred Owl, and Great Horned Owl owlets.  I realize many people reading my blogs are not birding experts so I want to make the point that the sound you will hear in the background when the screech owl was recorded, are frogs, not a sound made by the owl.

I'm deviating a little from the theme of this photo blog.  The Eastern Screech Owl is not a very large bird at only 6 to 9 inched tall.  However, they make up for it with their 19 to 24 inch wingspan.  These extremely camouflaged bird hides out in nooks and tree cavities through the day making them difficult to find.  Most of the screech owls I've found were sleeping so I've become used to the fact that I may never see their eyes. 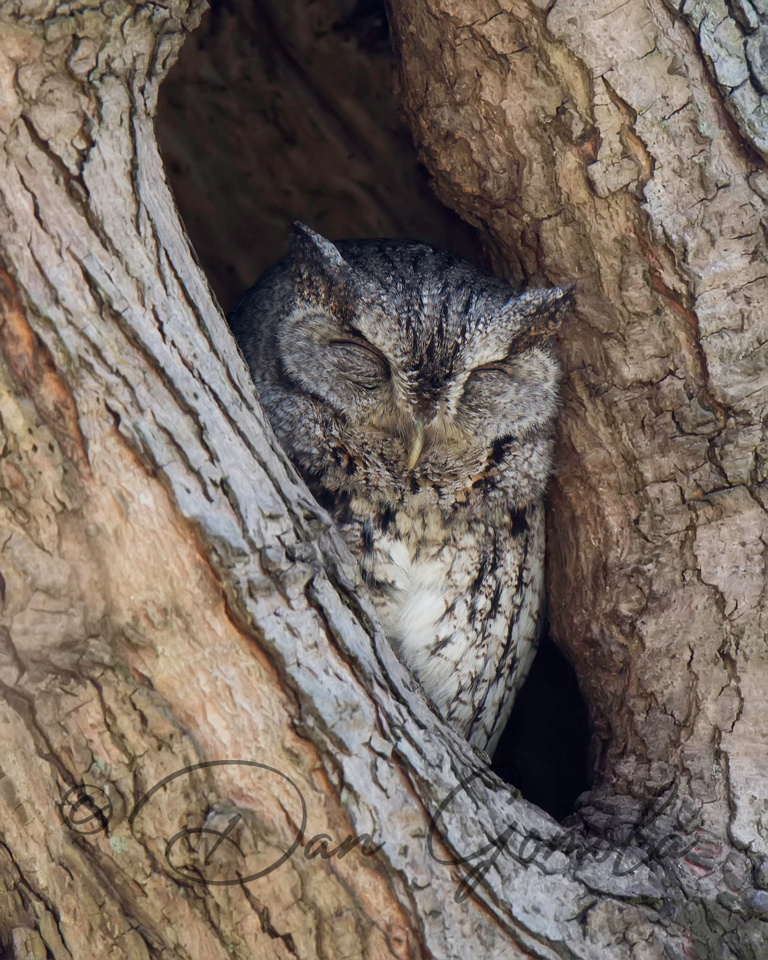 Lo and behold, it opened its eyes.  I'm happy I was paying attention because the eyes were closed again within a minute. 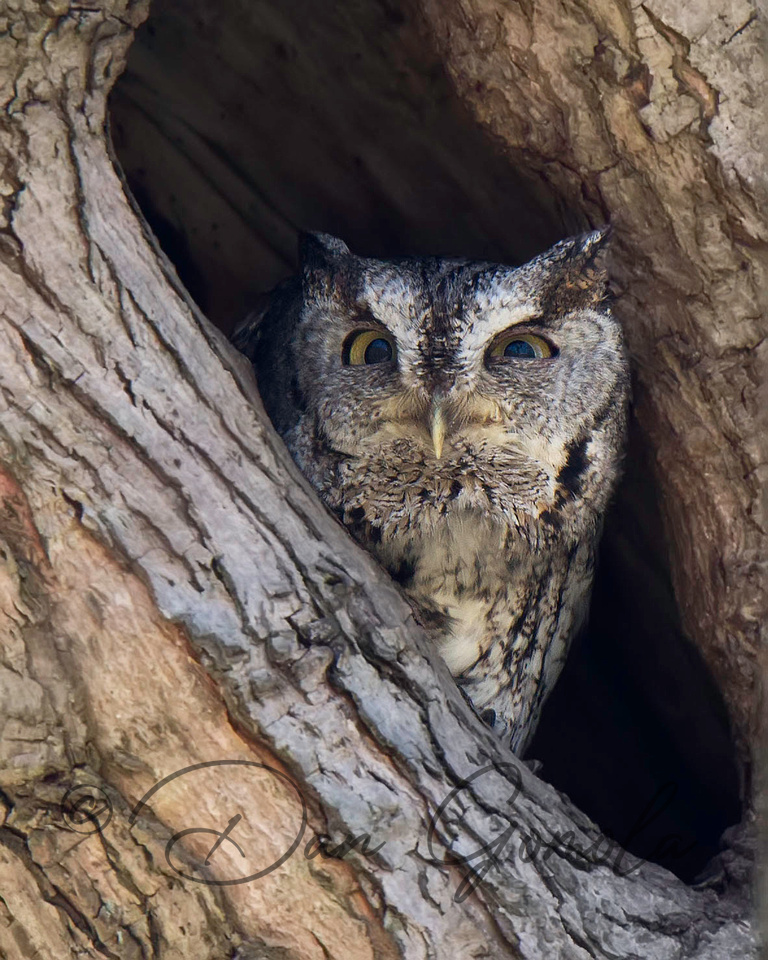 The Barred Owl is an attractive owl with soulful brown eyes and brown-and-white-striped plumage.  Even though they are 16.9 to 19.7 inches in length with a wingspan of 39 to 43.3 inches, it can pass completely unnoticed as it flies noiselessly through the dense canopy or snoozes on a tree limb. 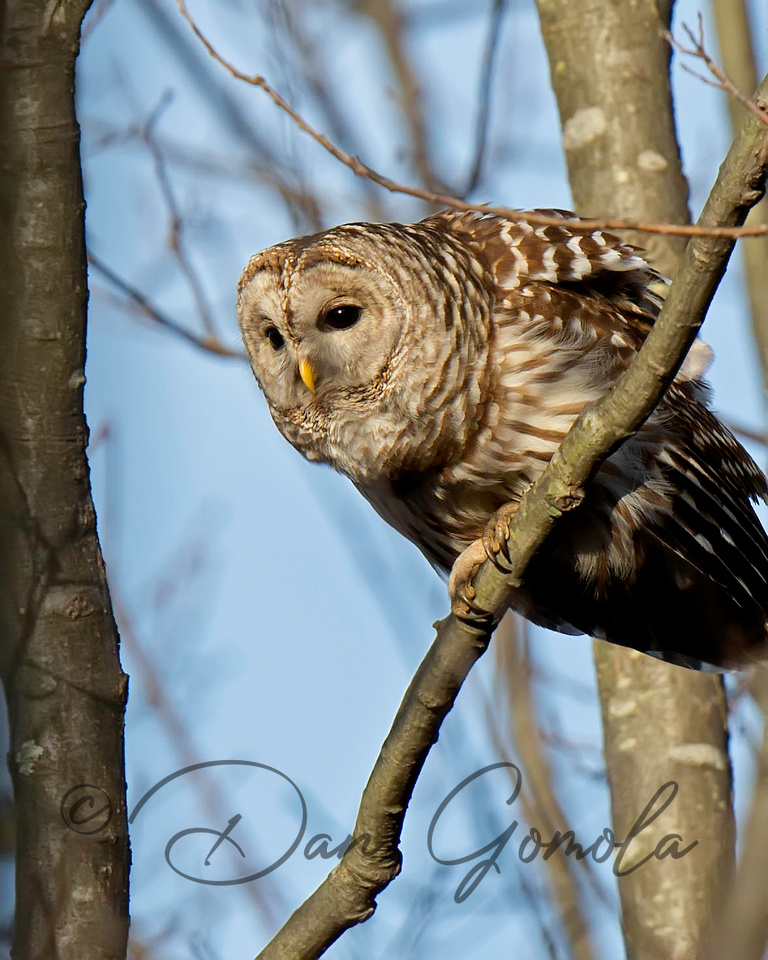 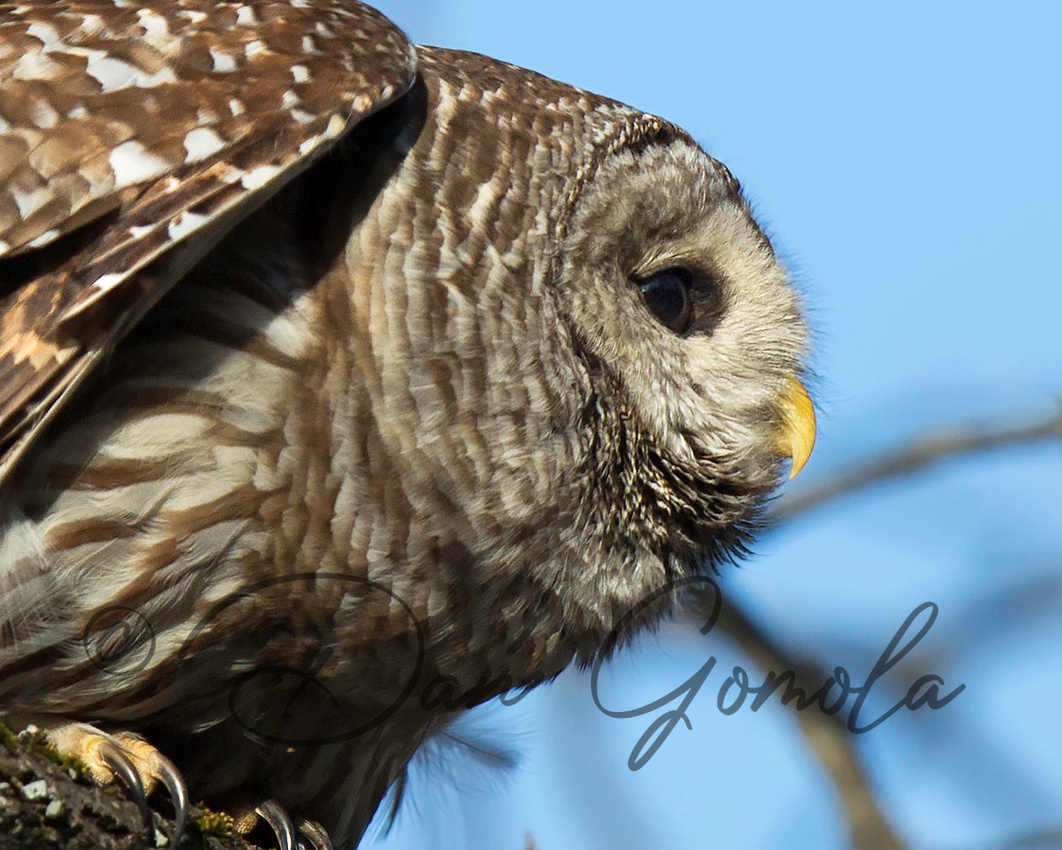 Over the years, many people come up to me and show me their own photographs whether they are on a camera card, a tablet, or their phone.  The Barred Owl is a common subject of these photos.  Although you can pass right by one without seeing it, they are also an owl you can see during the day. 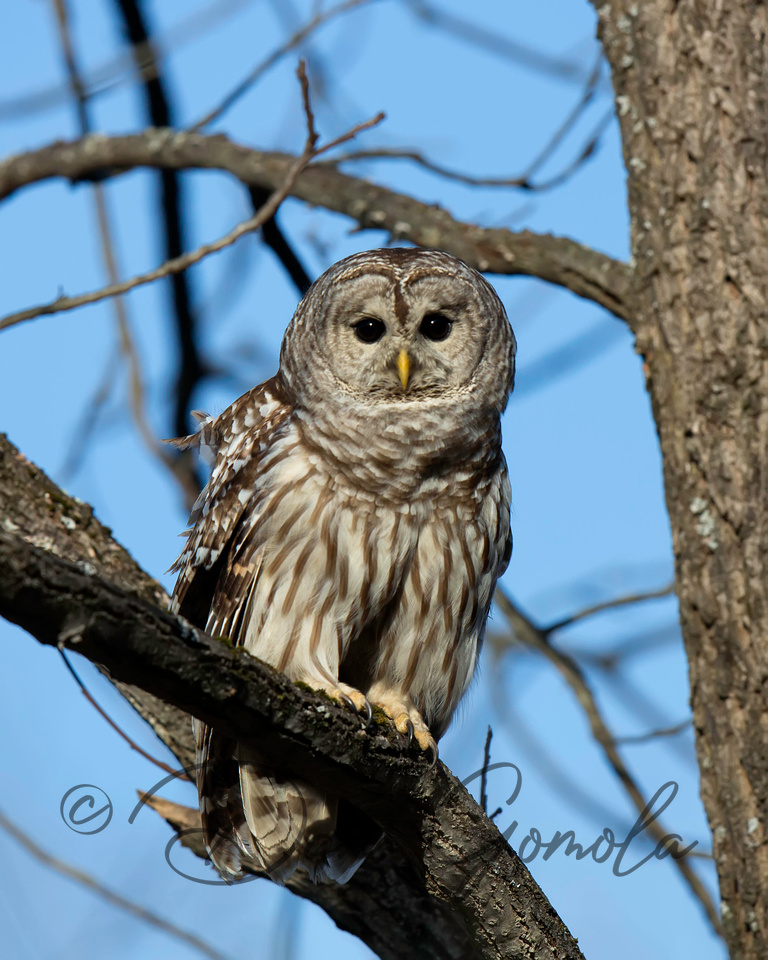 One day, these Great Horned Owl owlets will grow into an 18 to 25 inch body and a 3 to 5 foot wingspan.  At this point in their lives, these superbly camouflaged owls will remain in their nest for a few more weeks. 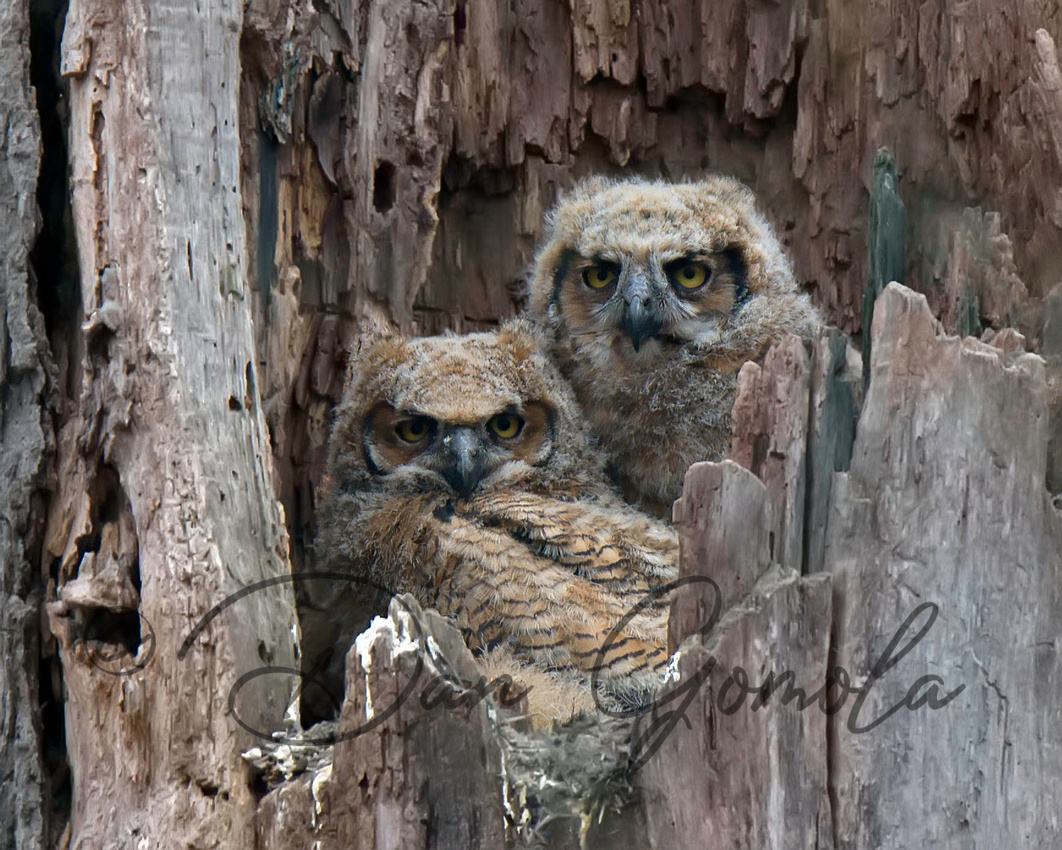 There was an adult Great Horned Owl perched high in a nearby hemlock tree.  While it remained deep in the branches, and very well hidden from my camera, the kiddos kept a watchful eye.

Did you know the eyes of an owl are fixed in place?  To look around they must move their entire head.  Their head and neck can be swiveled 180 degrees side-to-side and 90 degrees up and down. 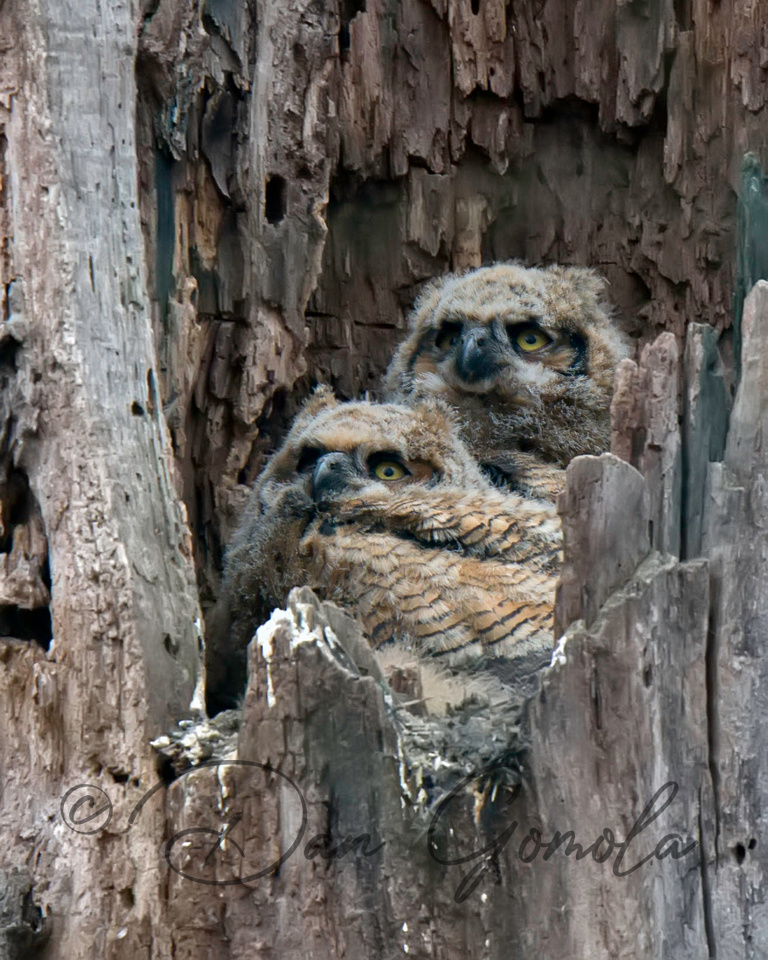 I hope you enjoyed this exhibit of some of the bigger birds I've photographed this spring.  Check back soon for my next photo blog as I go a little smaller and share some waterfowl and shorebird photos.