2015 turned out to be a very nice year for my birding photography.  It's not completely over as we have songbirds migrating through Pennsylvania on their way to their wintering grounds.  There will also be numerous birds coming back to our, soon to be, winter landscape.  I'm looking forward to making some memorable images of Golden-crowned and Ruby-crowned Kinglets not to mention the little Dark-eyed Juncos that visit our feeding stations all winter long.

But first, I'd like to share some additional images of birds found near water.  We'll start off with the well known Belted Kingfisher and move on to the not so well known, Common Gallinule, and finish with a series of shorebirds I found along Lake Erie.

One day, as the sun dipped behind the hills, I found this male Belted Kingfisher perched above a small creek winding through a valley in Butler County, PA.

I didn't have to watch him very long when he dropped into the water to snag a little fish. 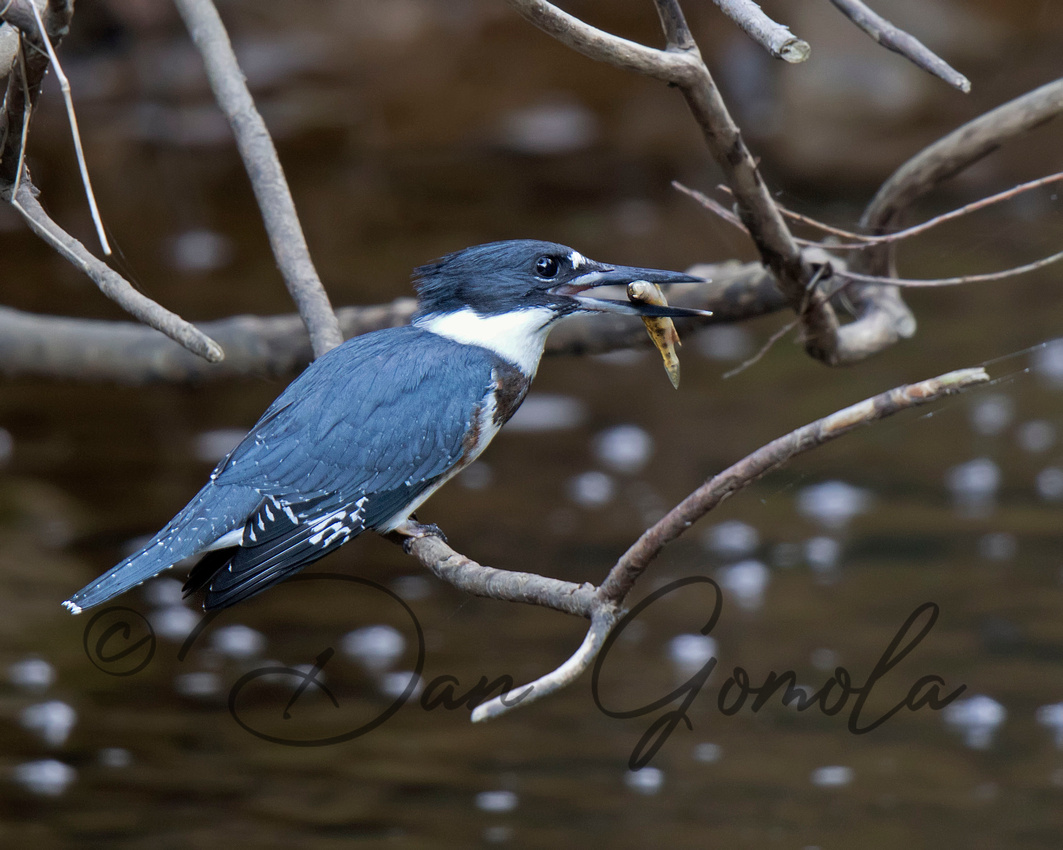 As he belted his familiar chatter, he tossed his fish around for a little while before swallowing it.  I would have had photos but the darkness prevented me from making any sharp photos during quick movement. 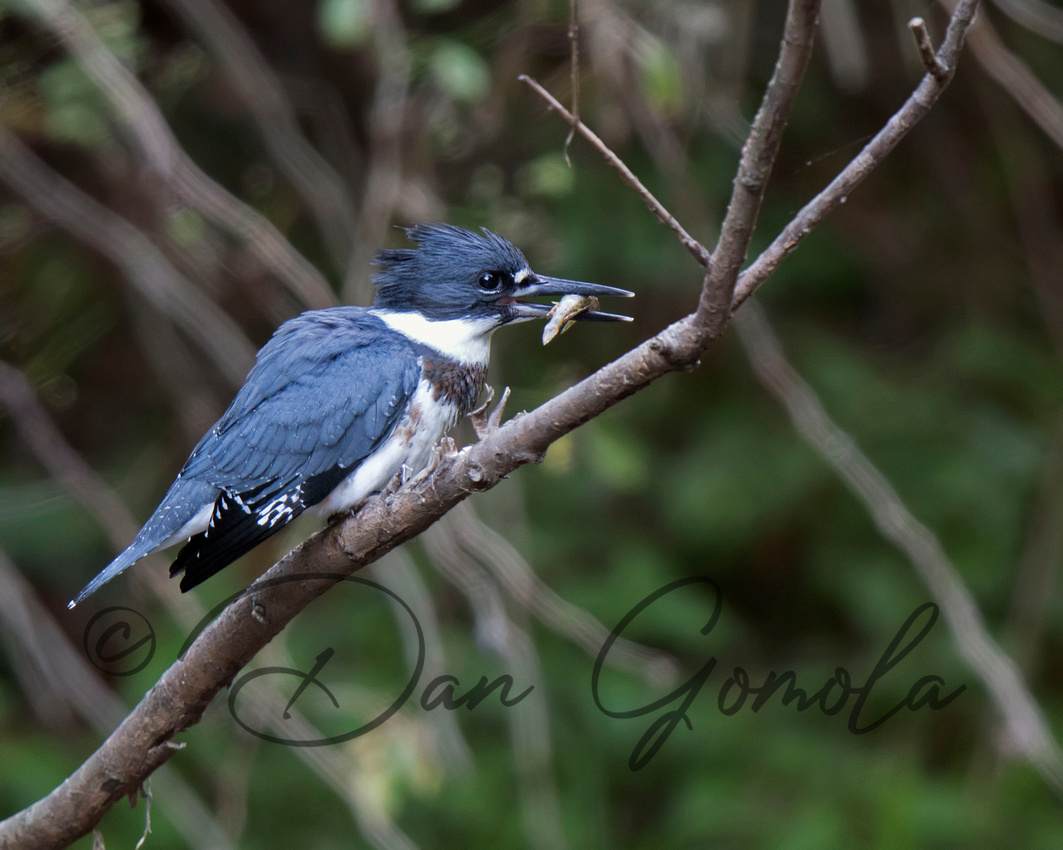 The Common Gallinule, formerly known as the Common Moorhen, will feed and shelter their young until they are old enough to feed themselves and fly.  An unlikely breeder in Lawrence County, PA, this Common Gallinule family consisted of two adults and about seven chicks.  On this day, the mid-morning sun provided harsh shadows and very high contrast images.  I returned several times in the evening when the light would be favorable but the family was nowhere to be found.  You can view more images from this morning in the Rails and Coots gallery. 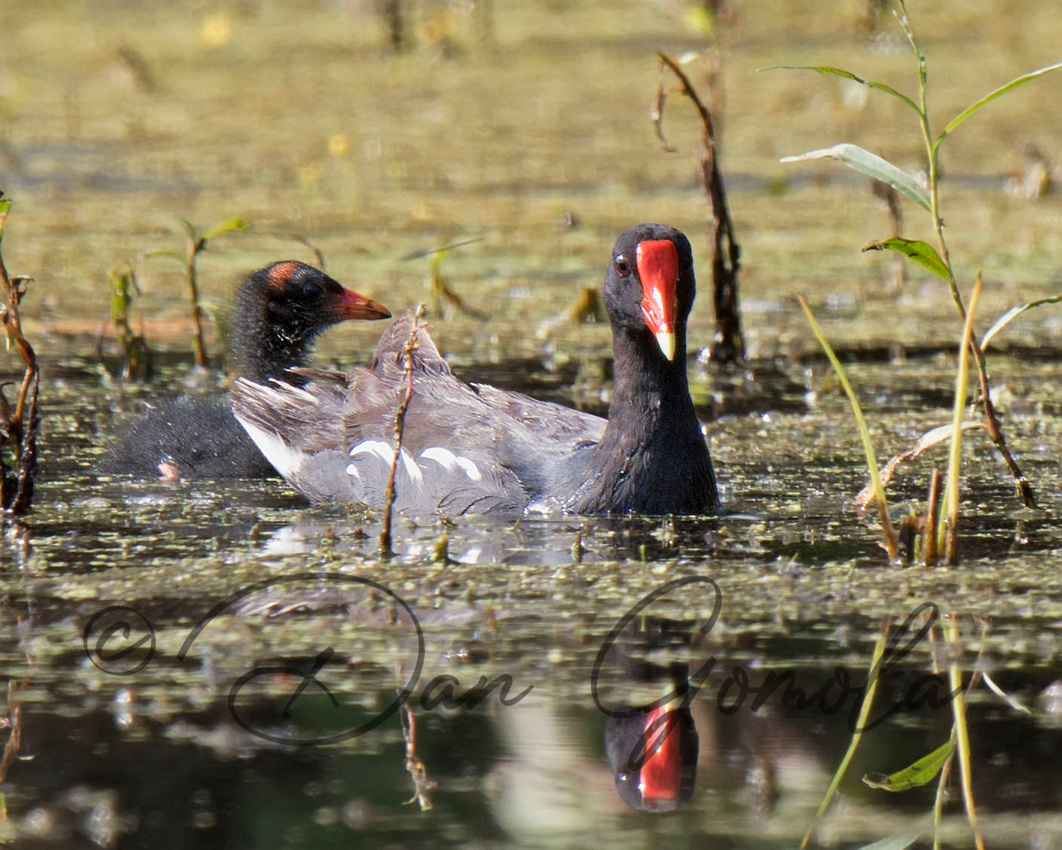 Bird photography isn't complete without visiting the shores of the ocean or a large lake.  In my case, the destination was the shores of Lake Erie.  The fall migration of shorebirds peaks in September.  Similar to the migrating warblers I've been photographing, the shorebirds do not have their breeding plumage right now.  They are fun to photograph nonetheless because you never know what you're going to find at the shore.

Although the Sanderling is classified a sandpiper, it has many characteristics of a plover including three toes, a smaller body, and its run-and-snatch feeding traits. 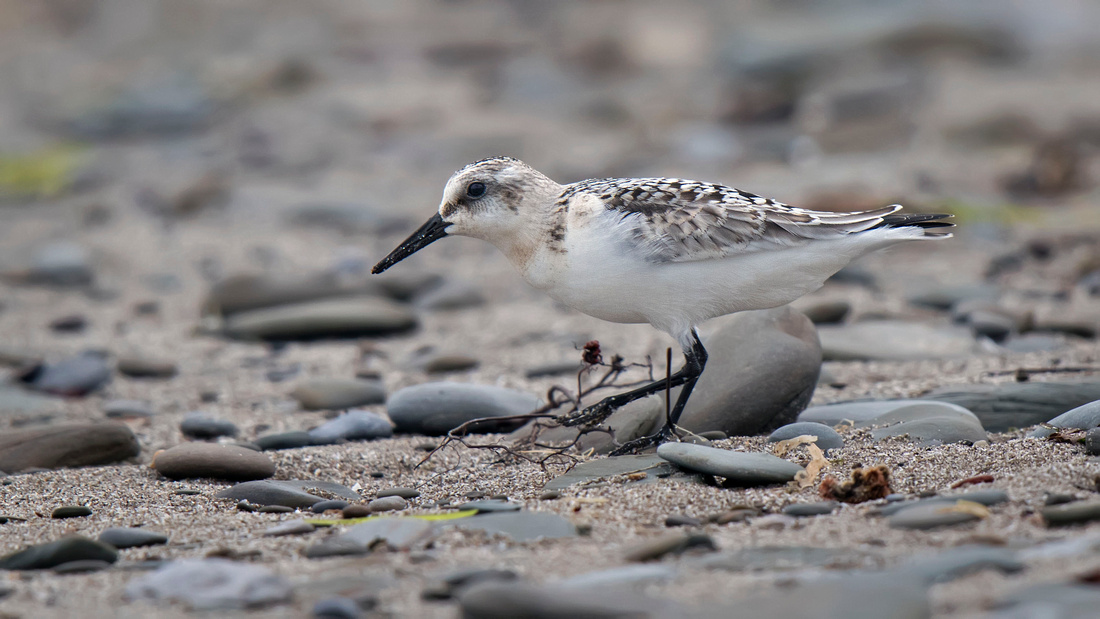 Normally, you will find Sanderlings chasing waves up and down the beach looking for aquatic invertebrates, but in Pennsylvania, they can also be found in muddy ponds created by washed up lake water. 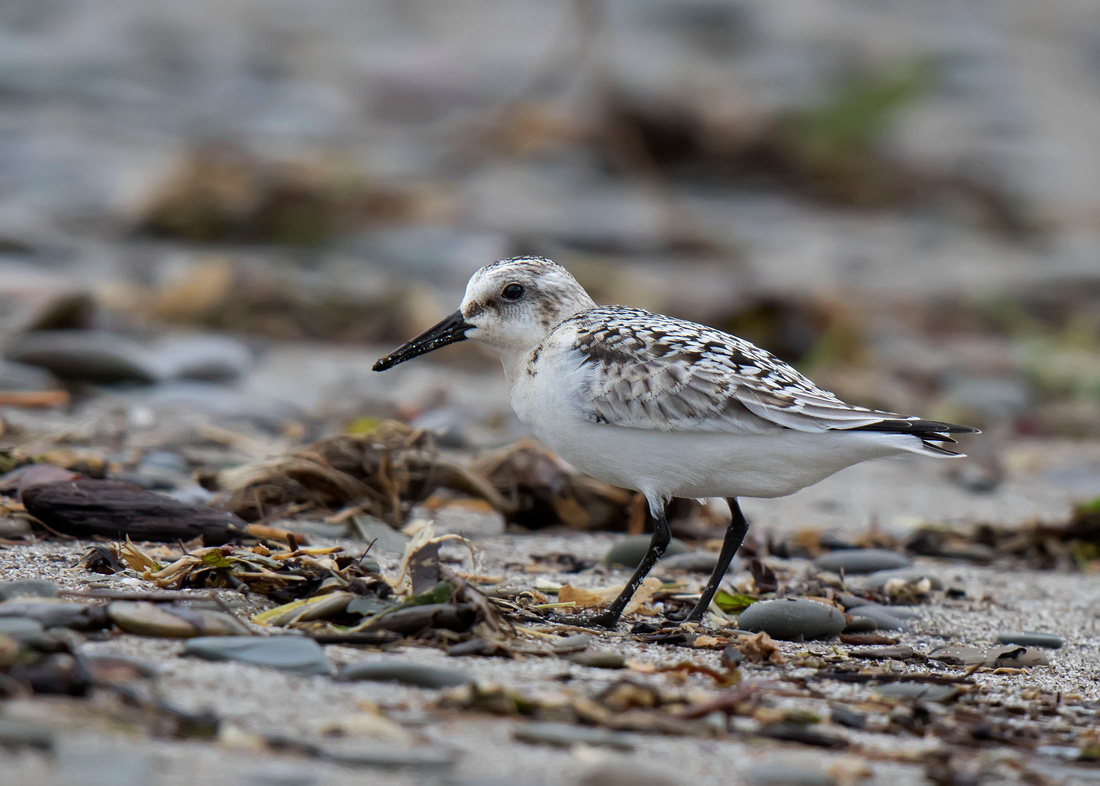 I was fortunate to come across these two birds at the shore.  The bird on the left is a Red Knot still holding some of its breeding color into the fall.   The migrating Red Knot will fly up to 19,000 miles in a single year.  The bird on the right is a Short-billed Dowitcher.  Another distance traveler, the Short-billed Dowitcher breeds in central and northern Canada and winters mostly on the shores of northern South America. 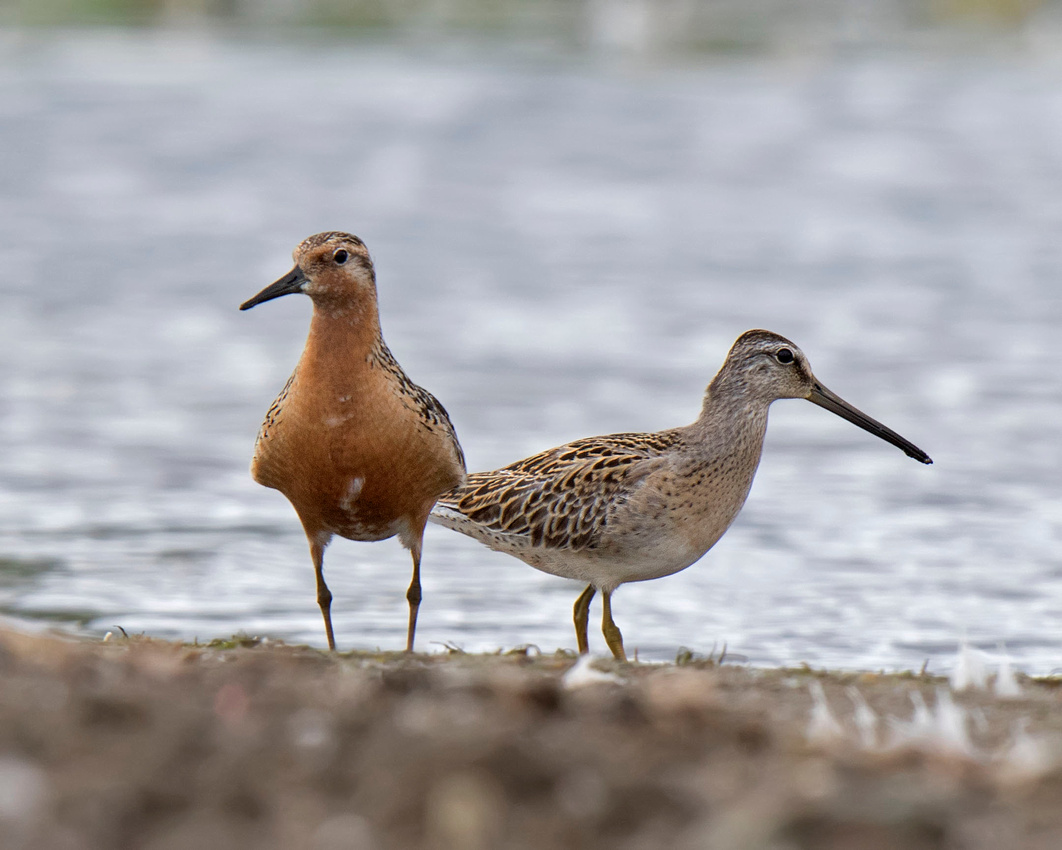 Avoiding deep water, the Short-billed Dowitcher can be found in mudflats, marshes, flooded fields, and beaches during migration. 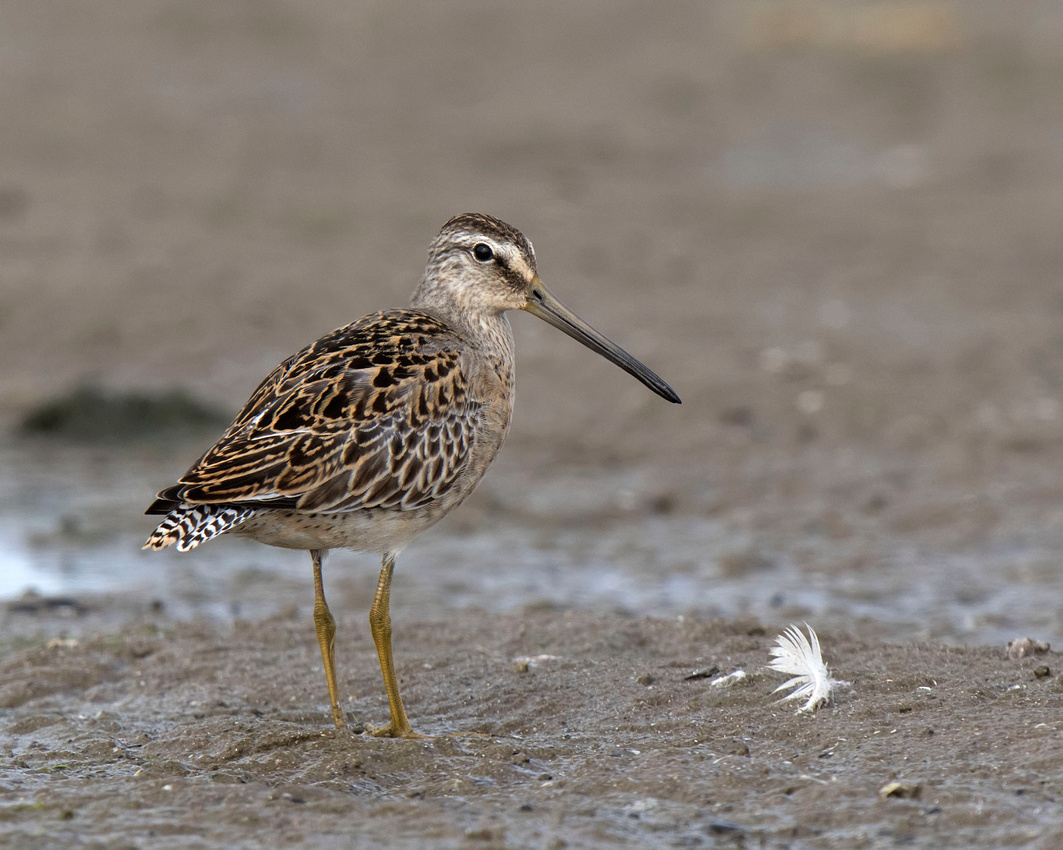 The Short-billed Dowitcher has a unique way of feeding.  They walk along sticking their beak into the ground in a stitching pattern, like a sewing machine. 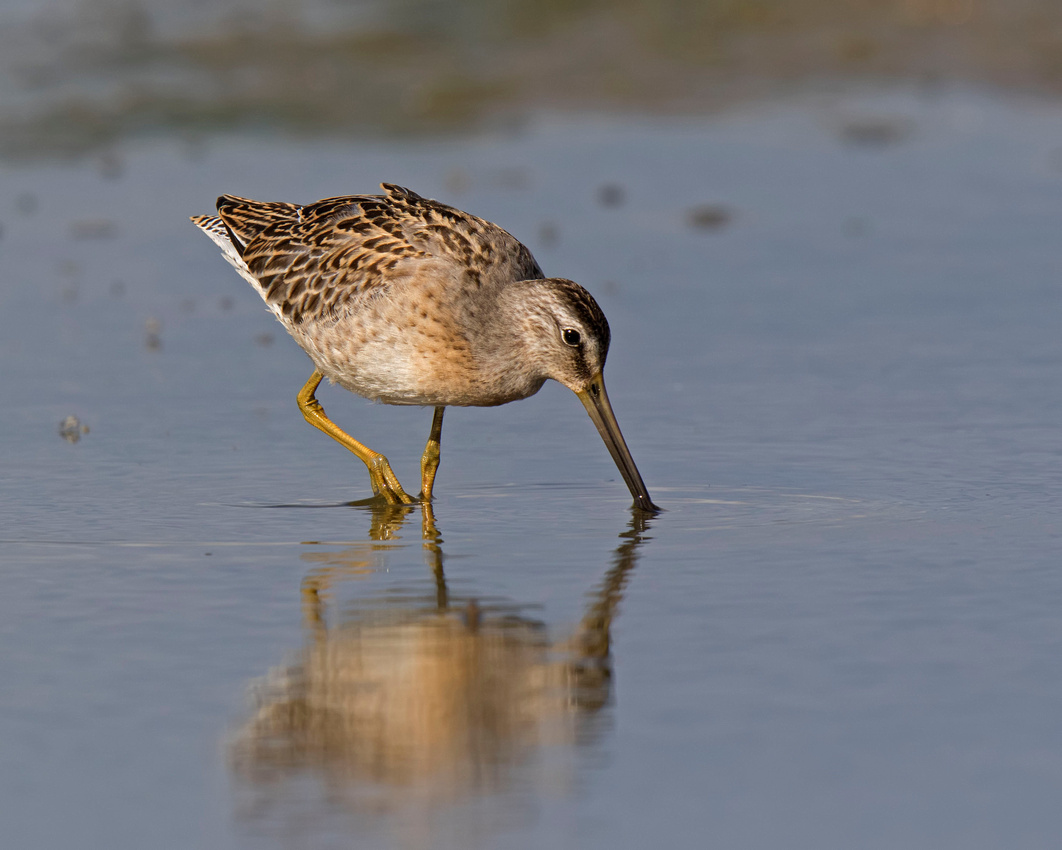 I mentioned earlier that the Red Knot is a flying champion.  It will fly from its northern breeding ground to the southern tip of South America and sometimes western Europe. 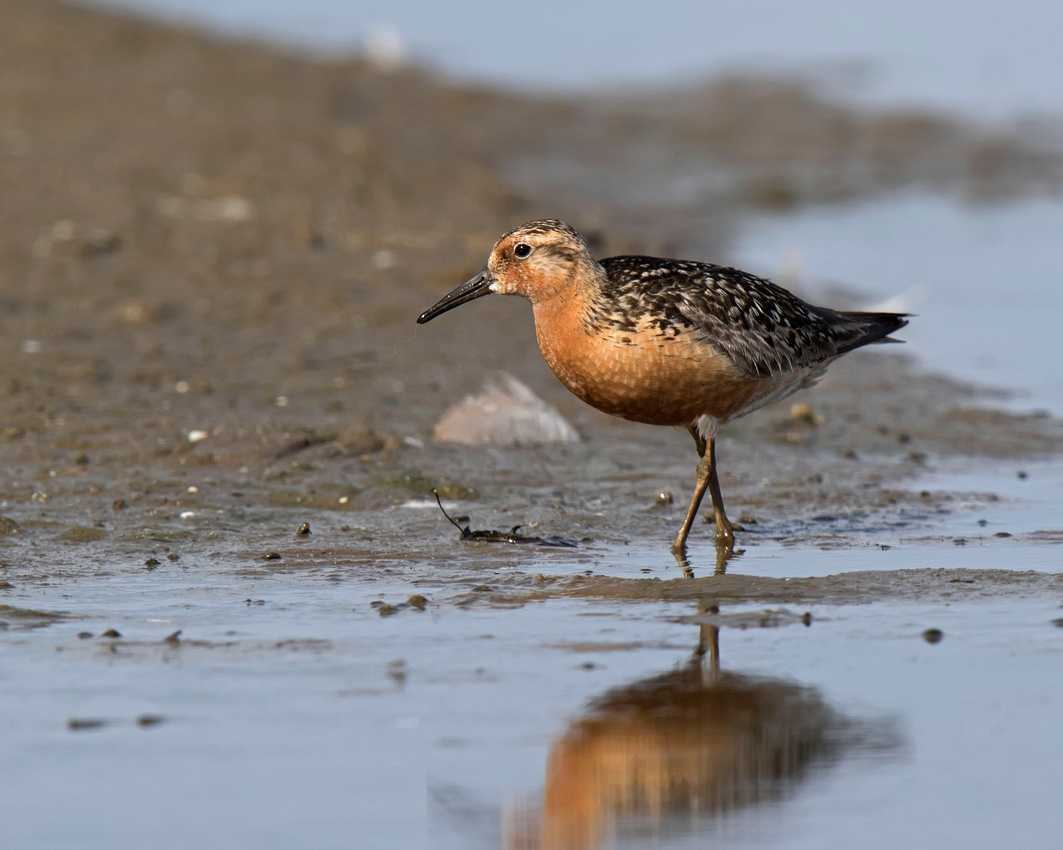 A Red Knot with muddy feet scanning the ground for food. 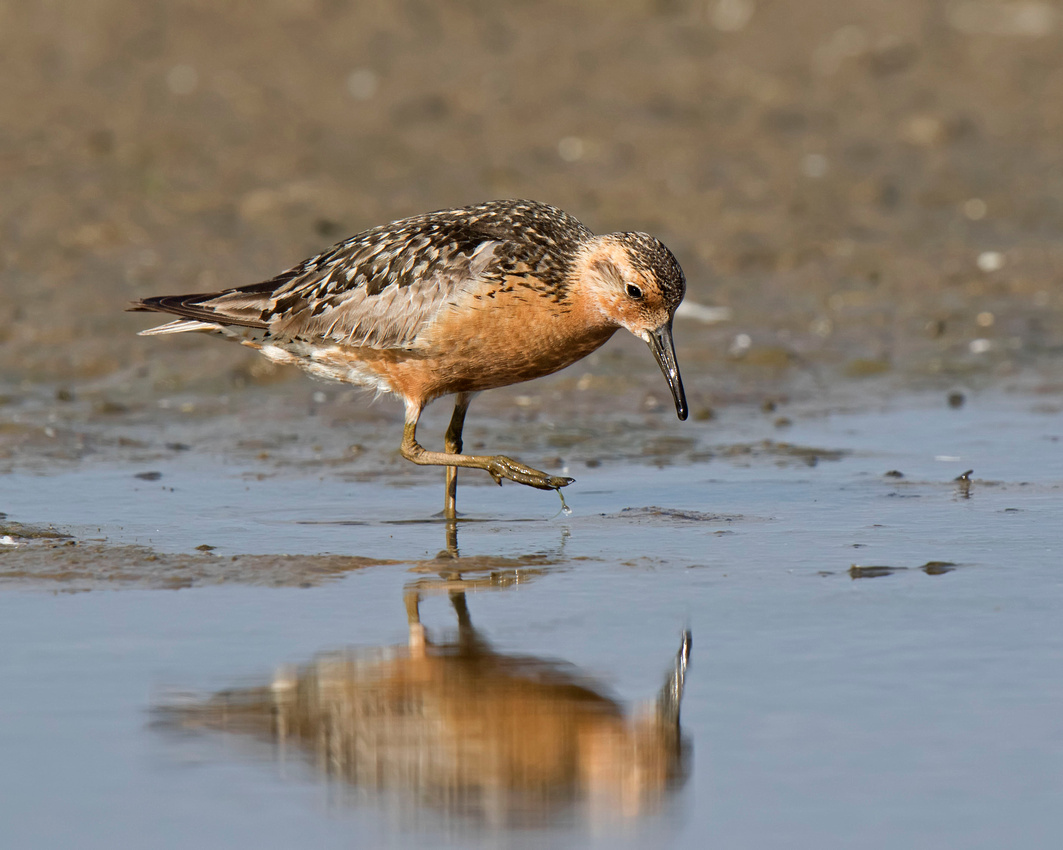 The Least Sandpiper is the smallest North American shorebird. 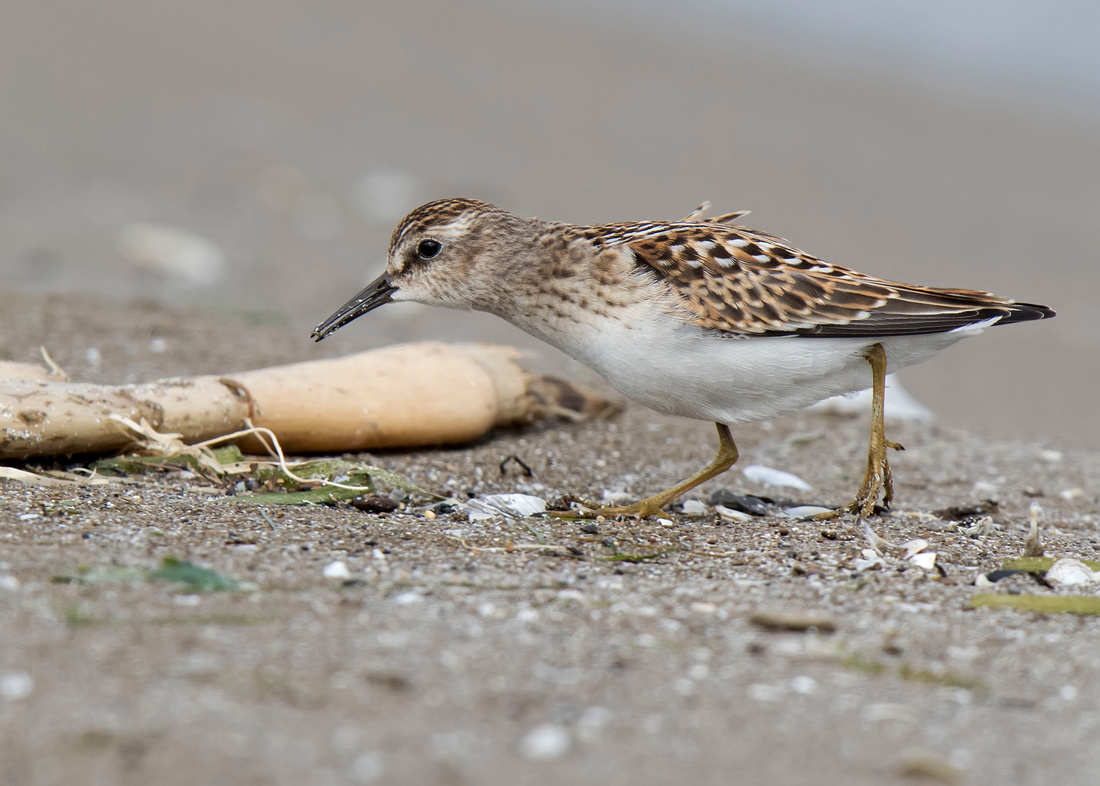 The migratory pattern of our smallest shorebird, the Least Sandpiper, covers almost the entire half of the globe, twice a year, from the arctic to the southern tip of South America. 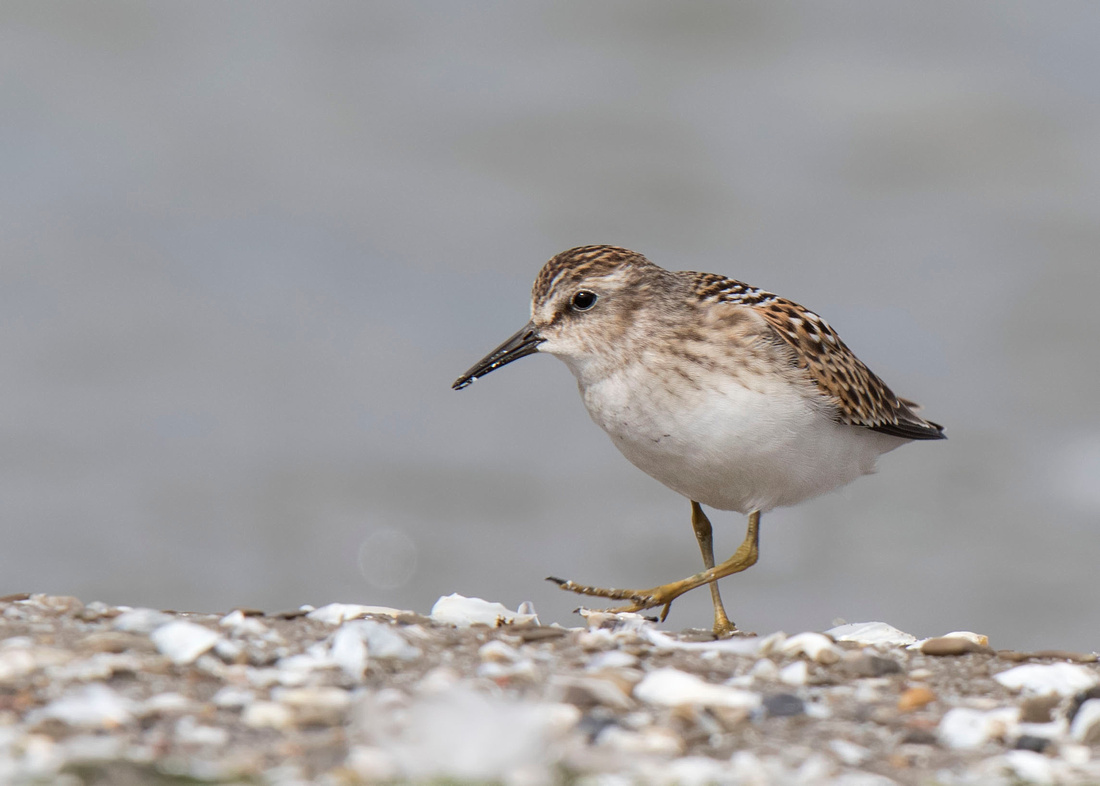 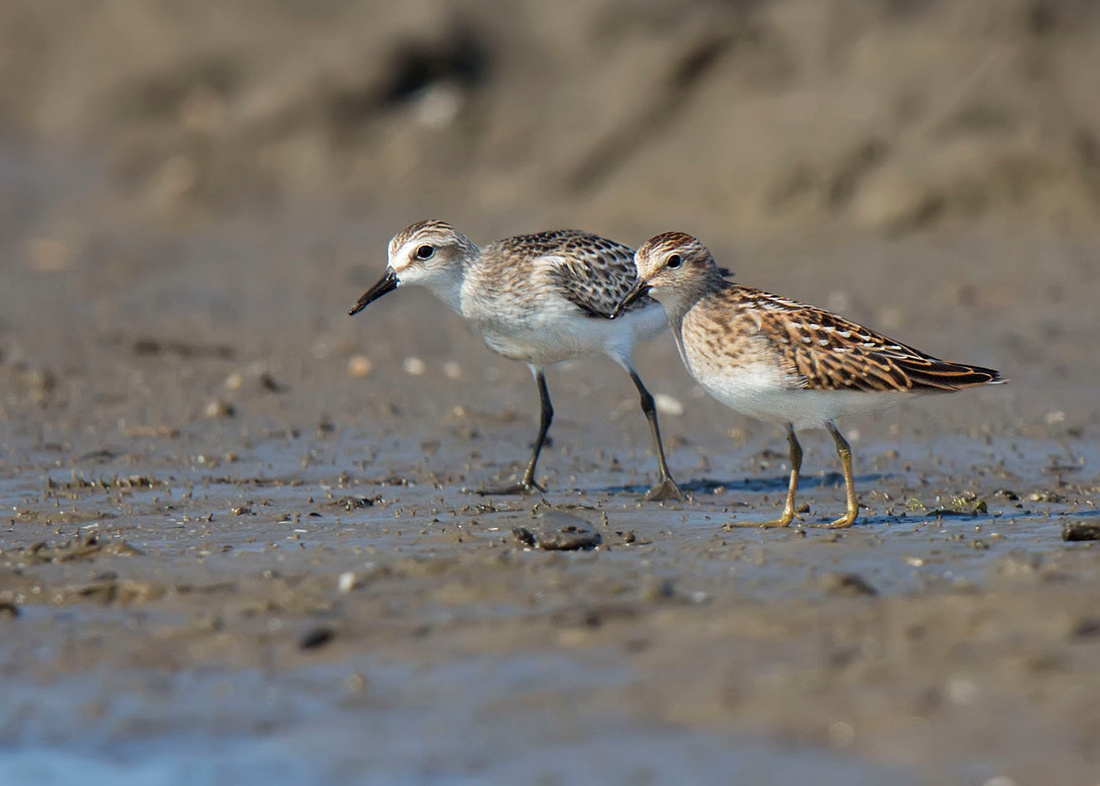 The Semipalmated Sandpiper also flies nearly half of the globe from breeding ground to its winter home.

During migration, the Semipalmated Sandpiper feeds feverishly during stopovers to replenish their body fat.

The Semipalmated Plover is another long distance migrator.  Their two journeys are very different.  In the spring, they are in a hurry to get to their northern breeding ground to lay their eggs at the start of the short summer.  In the fall, they tend to take their time on their journey back to their winter home on the southern shores of the United States all the way down to southern South America. 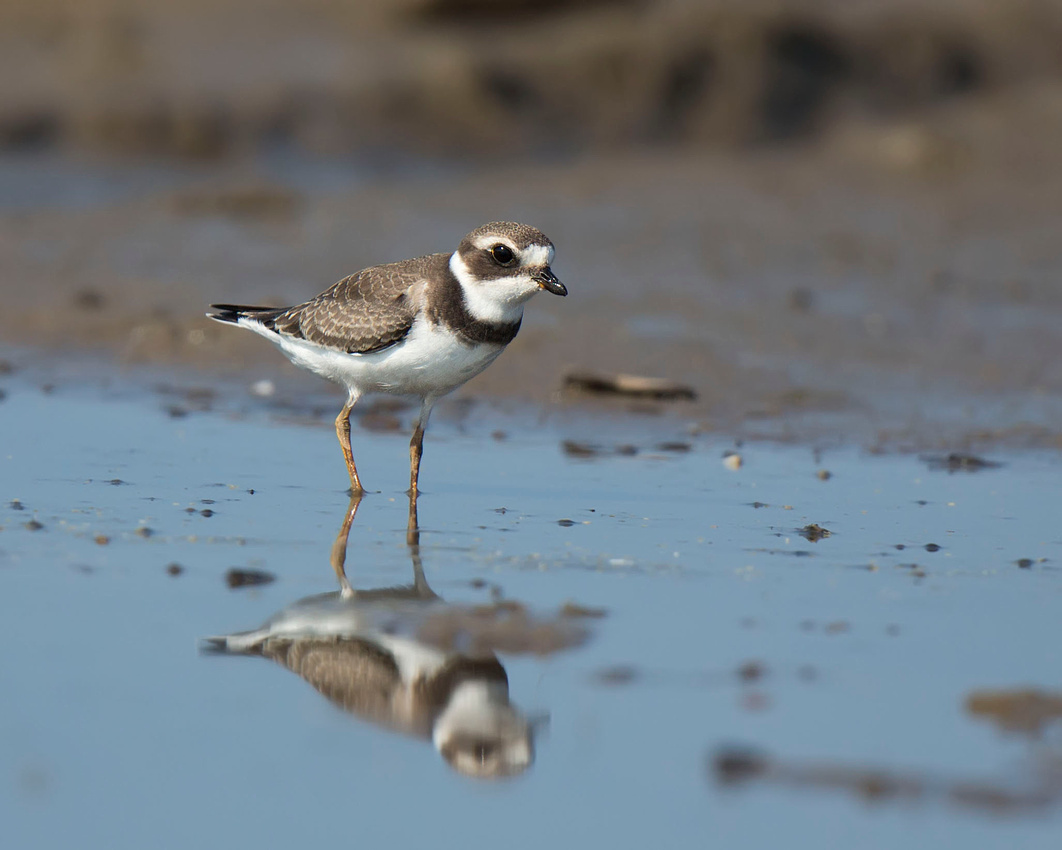 The Semipalmated Plover is a shorebird that you may see swimming short distances while foraging for food during migration. 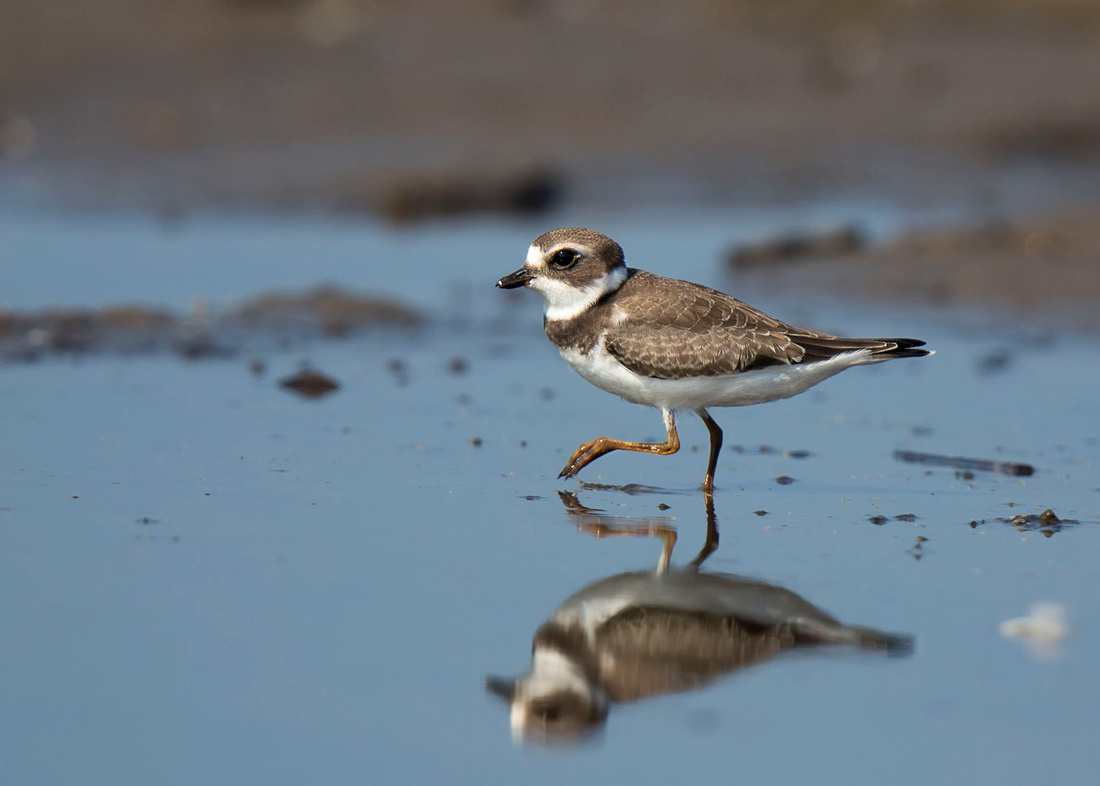 I hope you enjoyed viewing these photos.  I haven't photographed very many shorebirds in the past so most of the shorebirds in this post were first-timers for me.  If you would like to see additional photos of these shorebirds and other shorebirds, check out my Shorebird gallery.