It seems like it was yesterday and I was writing a blog about the end of August.  Here it is the end of September and I, once again, have many wildlife photographs I'd like to share.

I was struggling with a title to this photo blog because it holds a mixture of images that don't support a theme.  So, after adding all the images to the blog I began to look at them.  I realized that in almost all of them, the viewer can see life in the eyes of the subject.  My ability to come up with a meaningful quote isn't very good so I searched the internet for a quote about the eyes of wildlife.  I found a quote by Martin Buber and used it as my title.  What does it mean?  The animal's eyes are the window to its soul and tells a story without a language barrier.

One morning, I was finished working an area of the woods in search of fall migratory birds.  Just as I was getting in my car, I saw this little fawn standing along the woods line.  I already had my camera off the tripod and laying on the passenger seat so I slowly reached in and grabbed my camera and, supporting it on a beanbag through the car window, I made some photographs. 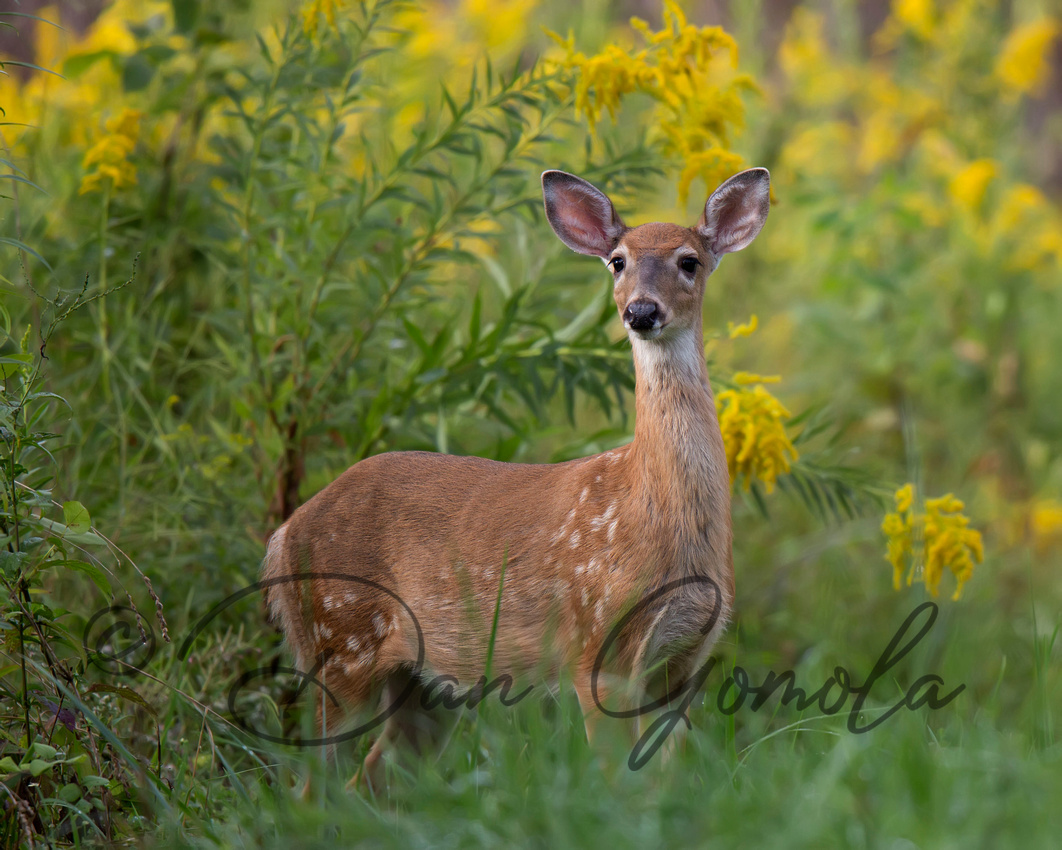 As I waited for an interesting pose from the fawn, it began to walk right towards me.  I switched to video and made a short video clip.  After it began to get too close, I decided to stop recording and scare it away.  It is living in an area open to hunting so it needs to have fear of humans in order to survive.  Click on the video clip to watch the curiosity of the little fawn.

Fall migration has provided some nice opportunities to see warblers and other birds on the way to their winter grounds.  Below is a Blackburnian Warbler framed in the branches. 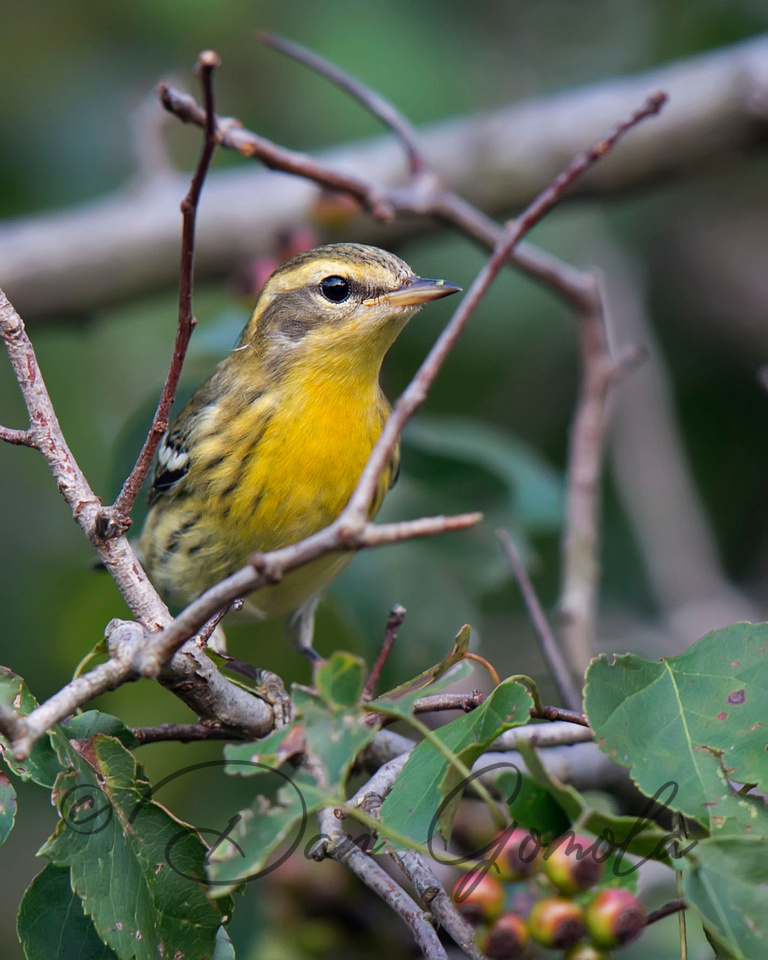 The Black-capped Chickadee is a very common bird year round but especially in late summer to late spring.  They frequent our feeding stations and some people get them to land on their fingers for a treat. 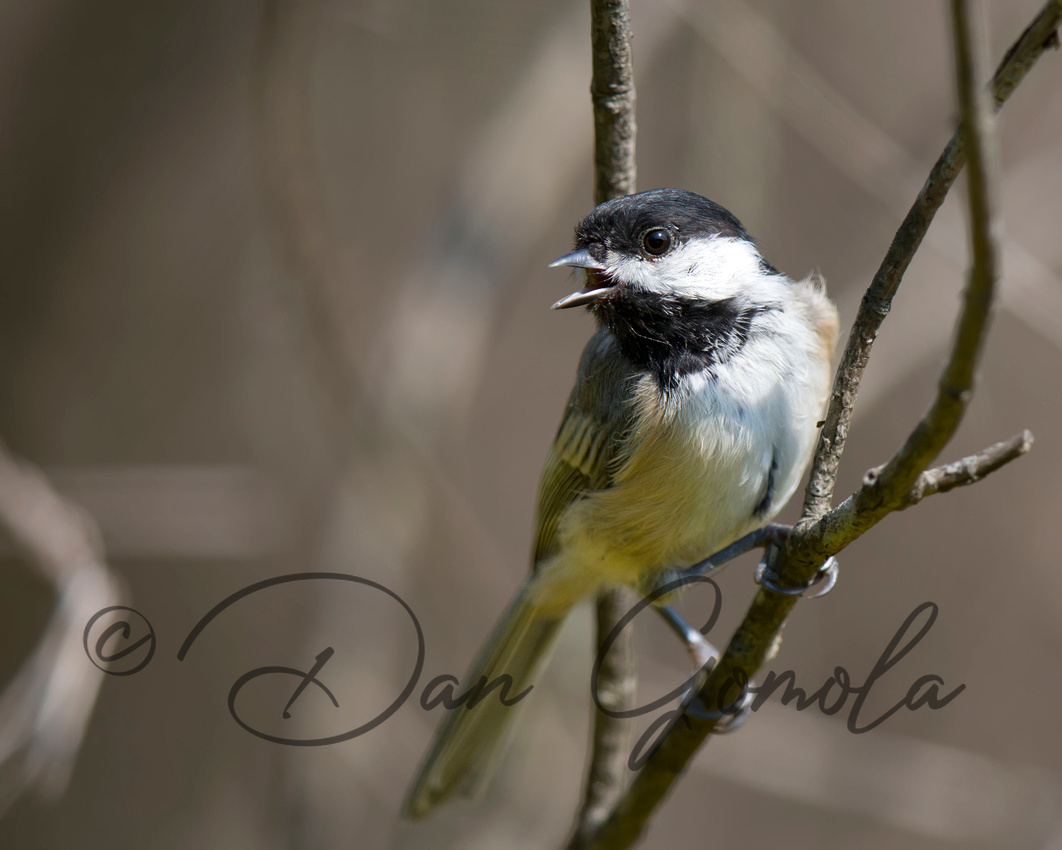 Many of the photographs I post are images I intended to make.  However, sometimes I am quite surprised about what I see.  One day, while watching a forest edge for migrating birds, this female Cooper's Hawk flew to this perch and sat for about five minutes before moving on. 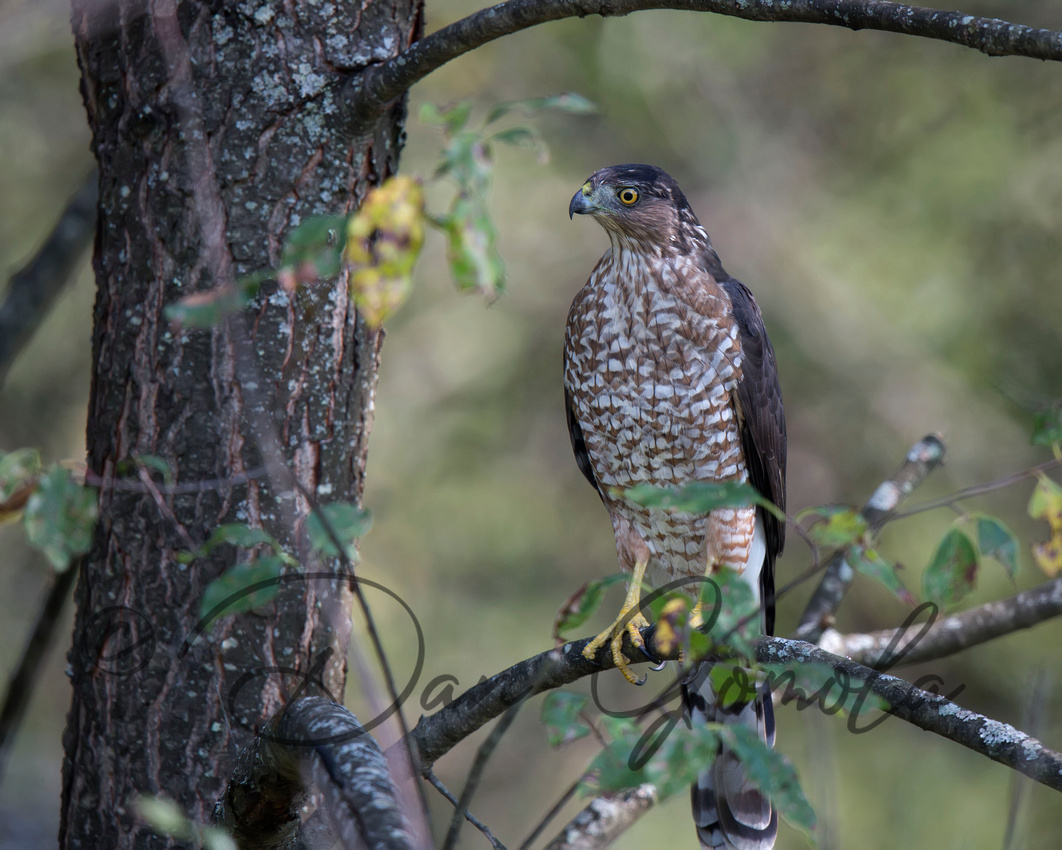 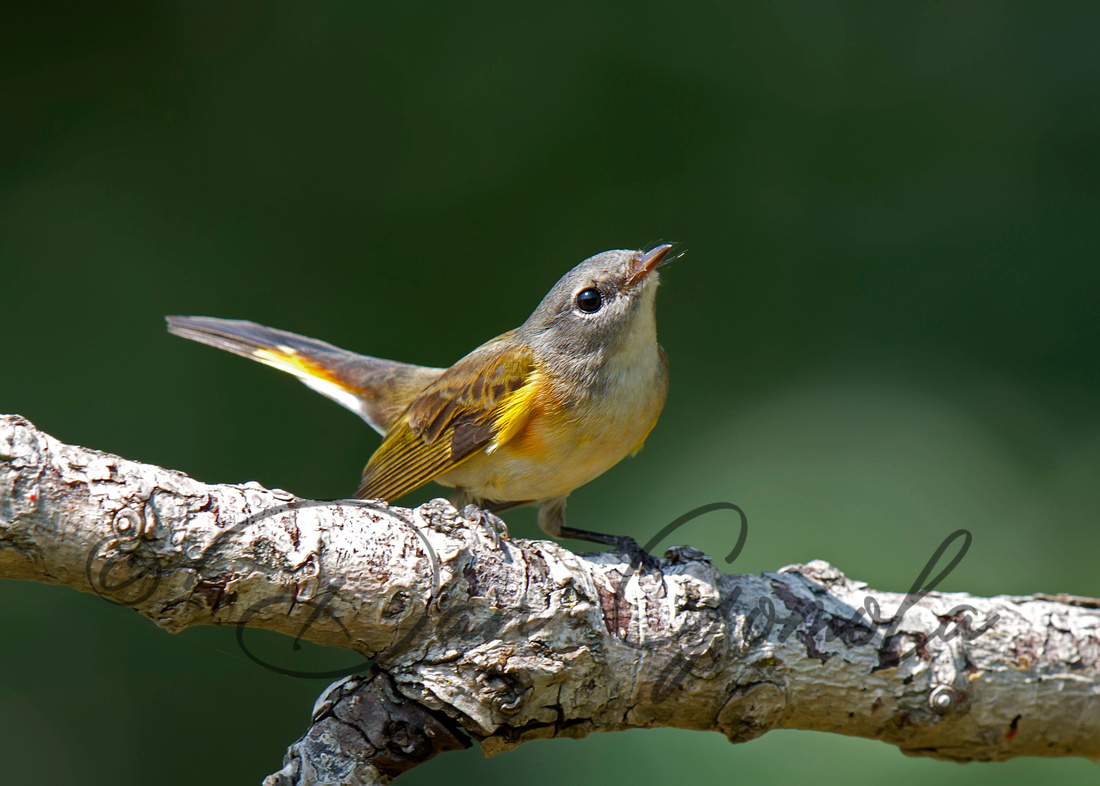 The Carolina Wren, also known as the "Mocking Wren", imitates the call of other birds. 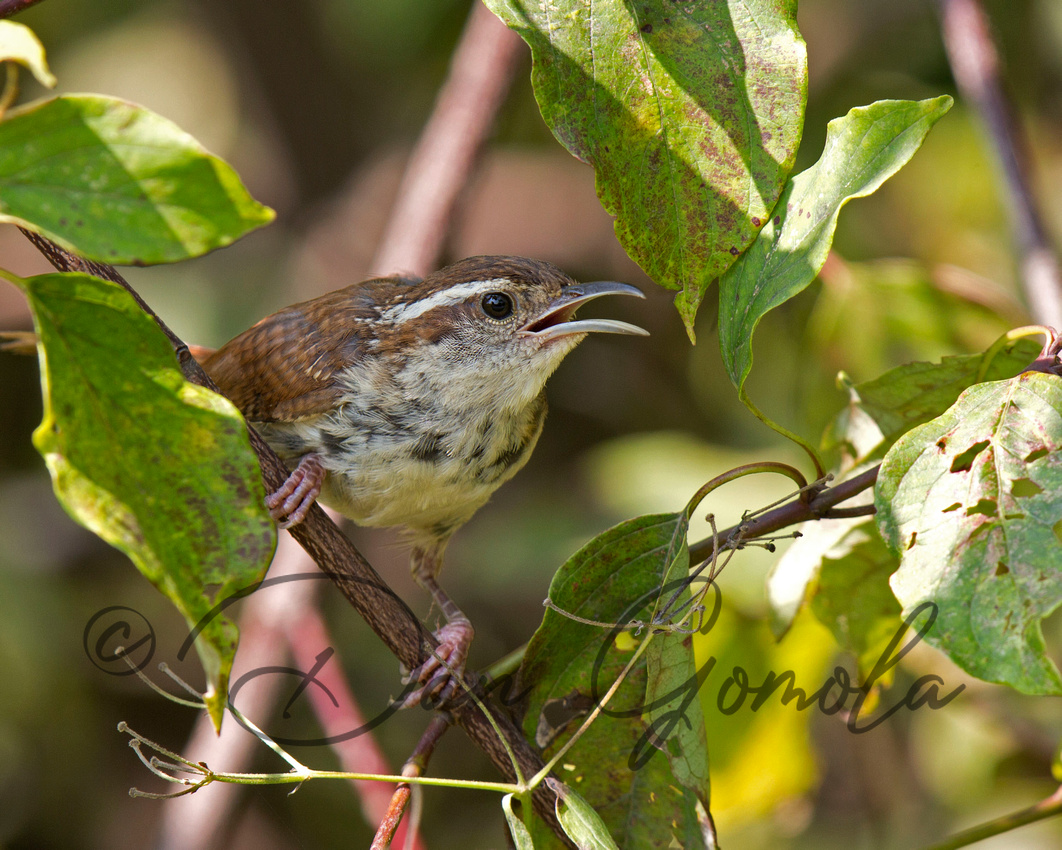 I found this Juvenile Broad-winged Hawk while driving a wooded, country road.  An adult has a heavily barred, light brown chest.  One of the identifying marks of a juvenile is the "teardrop" shaped streaks on its white chest. 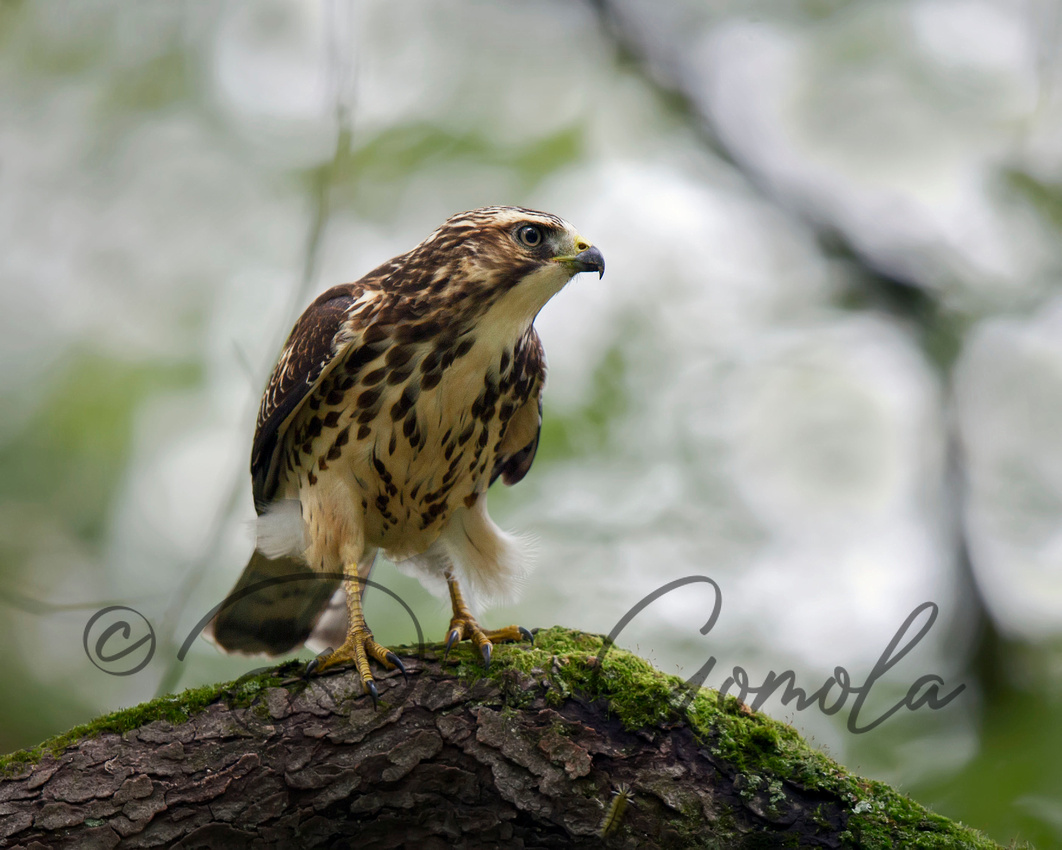 Here is another photo of the Broad-winged Hawk as it peers at me while sitting comfortably on one leg. 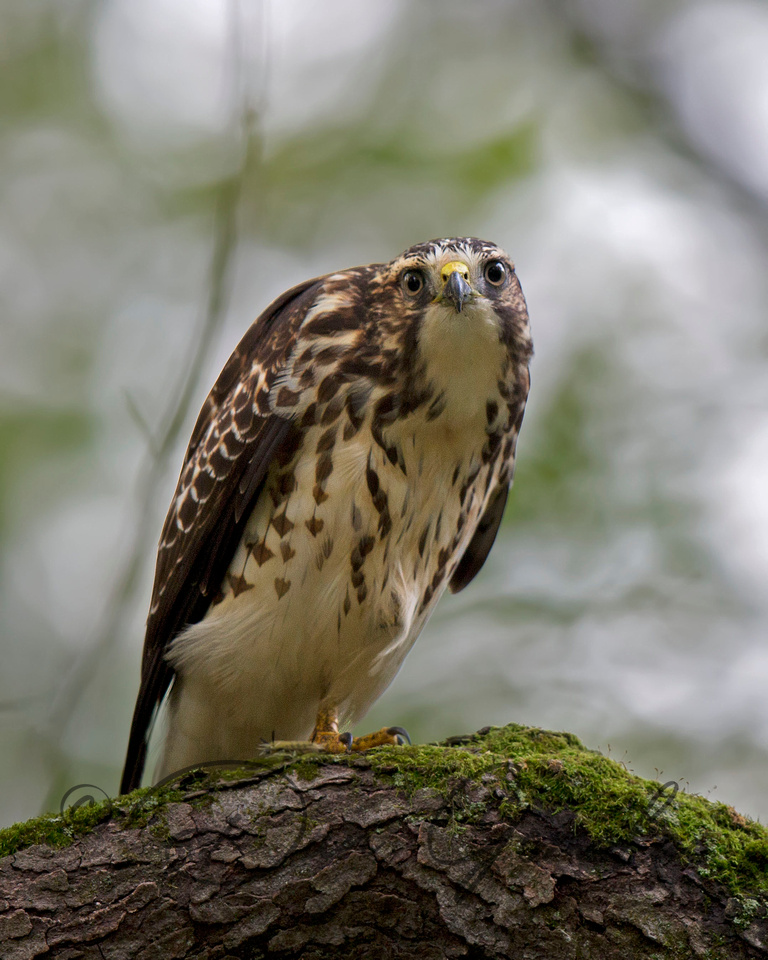 One thing special about fall photography is finding birds in trees and shrubs covered in fruit.  Below is a male Common Yellowthroat sitting in a Hawthorn bush. 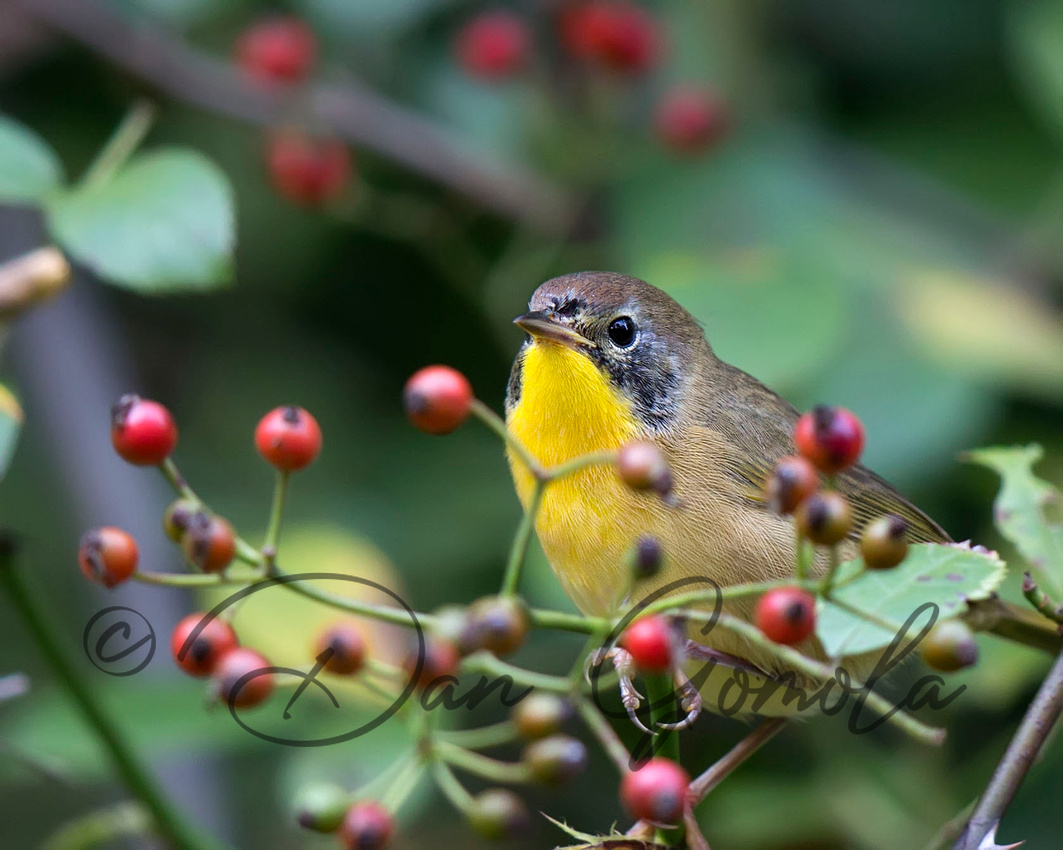 The elusive Ovenbird.  I've seen quite a few this year and am always happy to see another.  This portrait is one of my favorites. 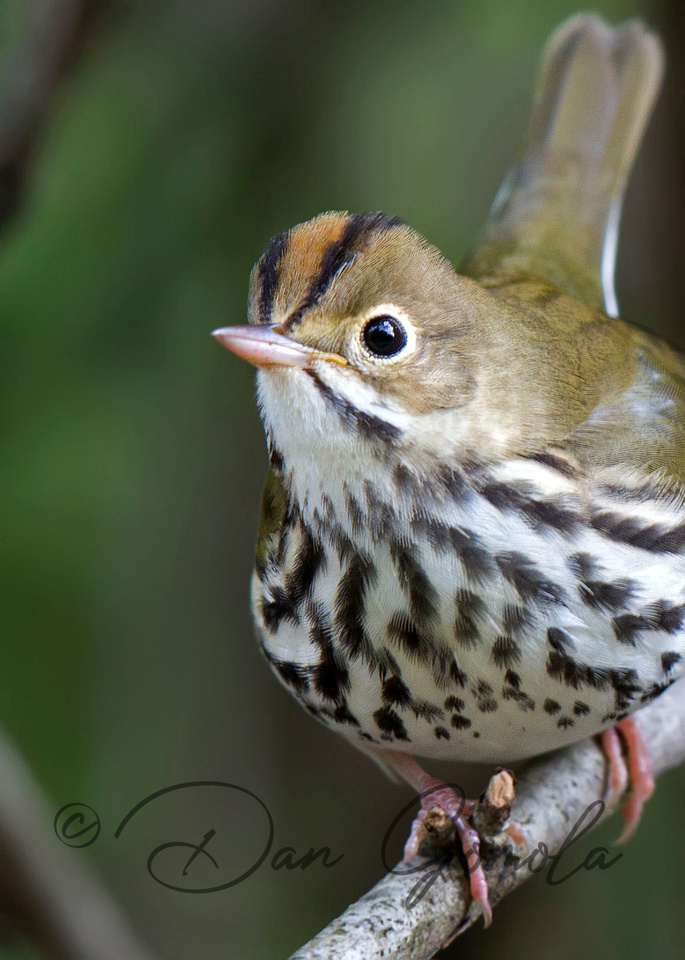 The Magnolia Warbler was originally called the "Black-and-yellow Warbler" and "Magnolia" was its Latin species name.  Over time, Magnolia became its common name.

Here is a nice view of the white patches on their tail feathers used to help discourage predators. 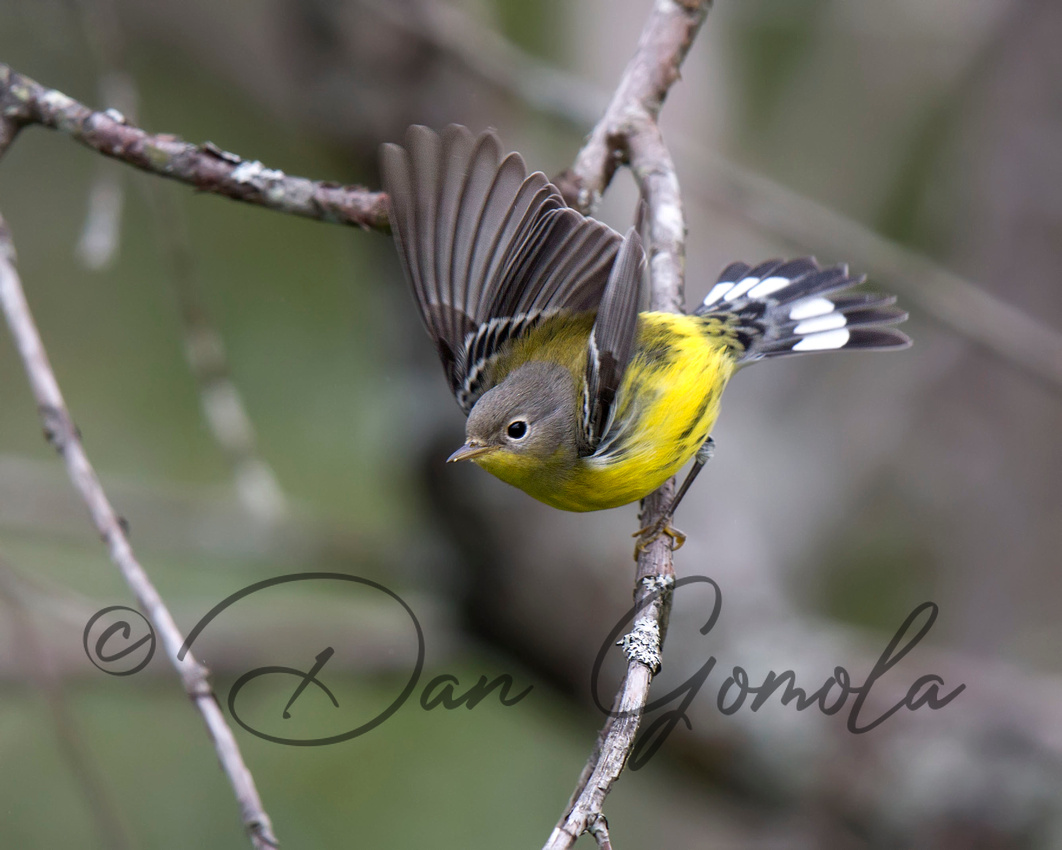 The next photo is a female Black and white Warbler.  This is a tough bird to photograph as they constantly circle trees in search of insects.  Most of the time, a nice pose is hard to get as they are always on the move and looking at the tree trunk.  I was lucky to have this little warbler pose for me.

The Tennessee Warbler's favorite diet is the spruce budworm.  The population of this species fluctuates with the populations of the budworm. 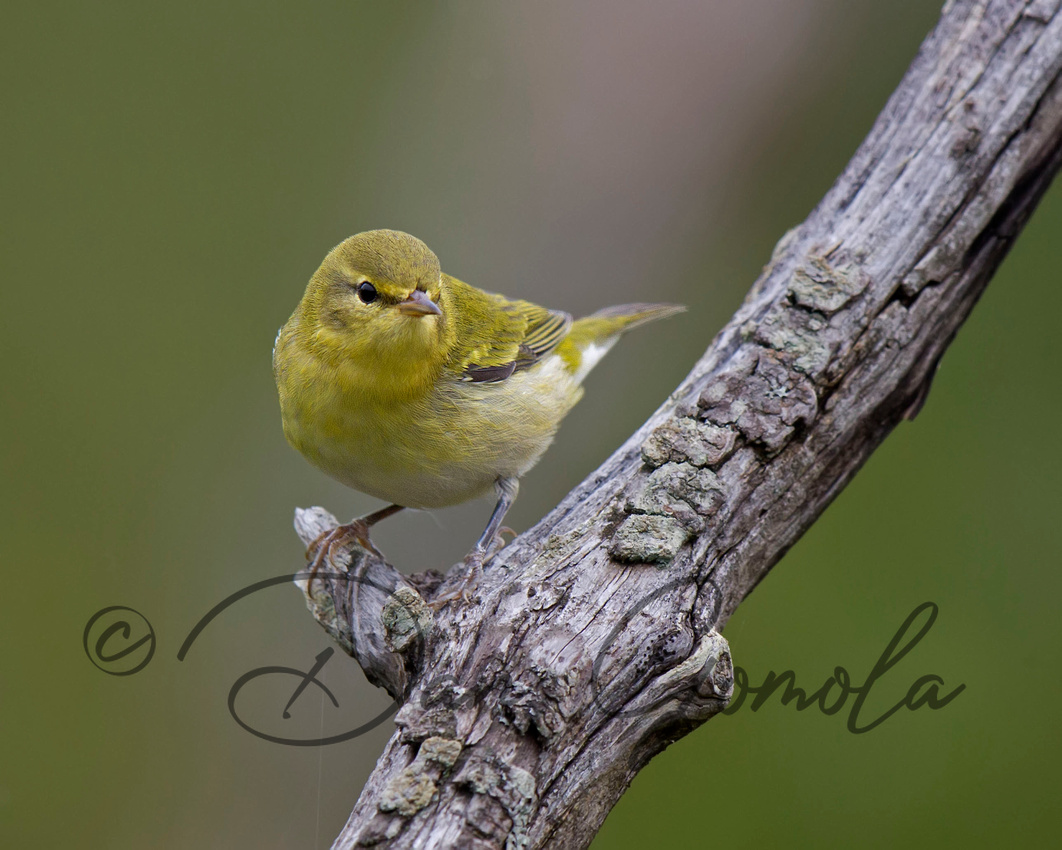 The juvenile Indigo Bunting is similar in color to an adult female.  Most males have already began migration to their winter homes and the females and juveniles will follow. 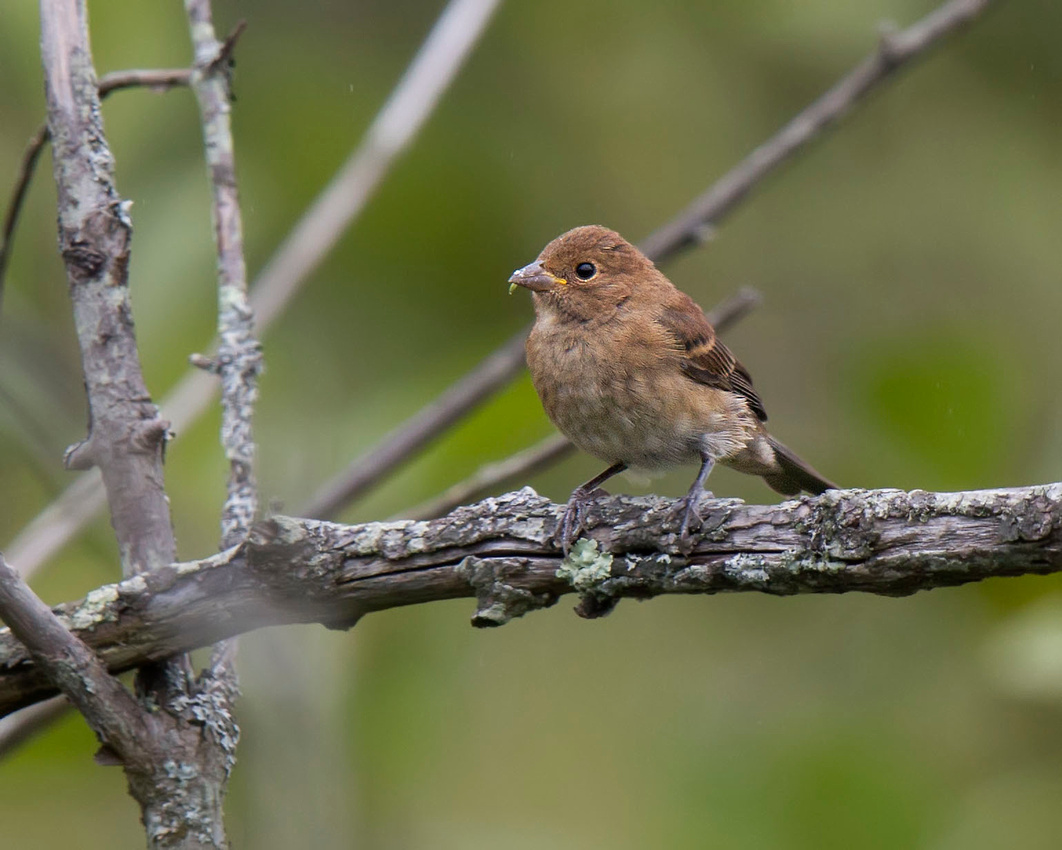 It was a dark, overcast, day when I made the next photo.  These two young Common Yellowthroats were having a quarrel.  The one on the left took flight and hovered above the other one in an aggressive fashion.  A slow shutter speed prevented me from recording that action. 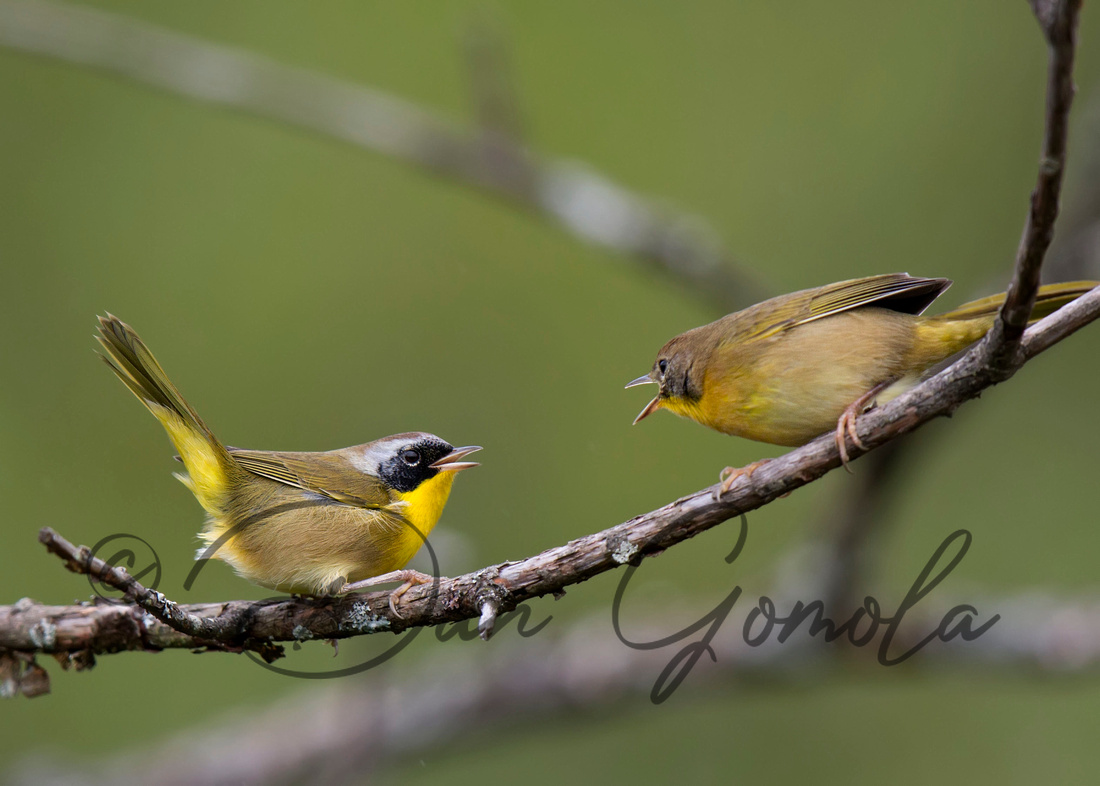 This female Northern Flicker was one of seven foraging around one of the perennial beds in my yard.  Although they are a woodpecker, the Northern Flicker is usually found digging in the ground for ants and beetles.  Note the soil and grass on her beak. 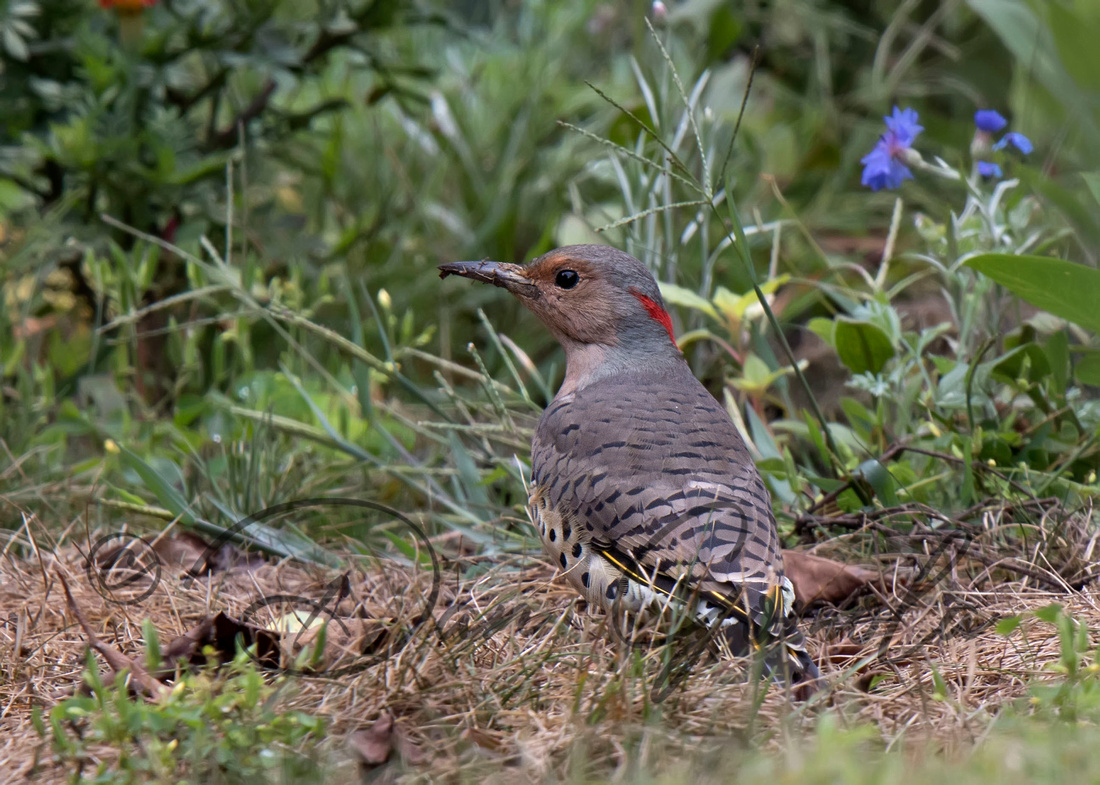 I hope you enjoyed the photos in this blog post.  Check back soon for a continuation of photographs of the elk rut.