At The Water's Edge

One thing to be certain is all wildlife needs water.  So sitting near water will usually guarantee at least a sighting.  That's what this photo blog entry is about.  The photos in this series were made on two different mornings at two different locations.

I woke up one morning with no idea what kind of wildlife I was interested in photographing that day.  After thinking about it during my morning cup of coffee, I decided to just spend a couple hours sitting in the trees along the edge of a flooded valley caused by an active beaver dam.  When I arrived and set up my Canon 7D MK II equipped with a Canon 600mm f/4 lens and a 1.4x teleconverter on my tripod, I slowly made my way to the water's edge.  The small scrubby trees that line the edge make is difficult to see through but it also helps to hide yourself.  The key is to find a small opening that your lens can see through.

When I first got into position I could hear several whines and grunts made by the beavers swimming in the water.  I could see the hut from my position but didn't expect anything to climb on top during daylight hours.  I caught a glimpse of two beaver swimming around before disappearing and going silent.  Sorry, no photos to share.  A beavers nose sticking out of the water while swimming away from me isn't very interesting.  There was a lot of Belted Kingfisher and Green Heron action across the swamp.

There are several dead trees in the water which is a common occurrence when beaver's flood a valley.  After a little while, one of the Belted Kingfishers came to hunt, landing on a fairly close perch, on my side of the water. 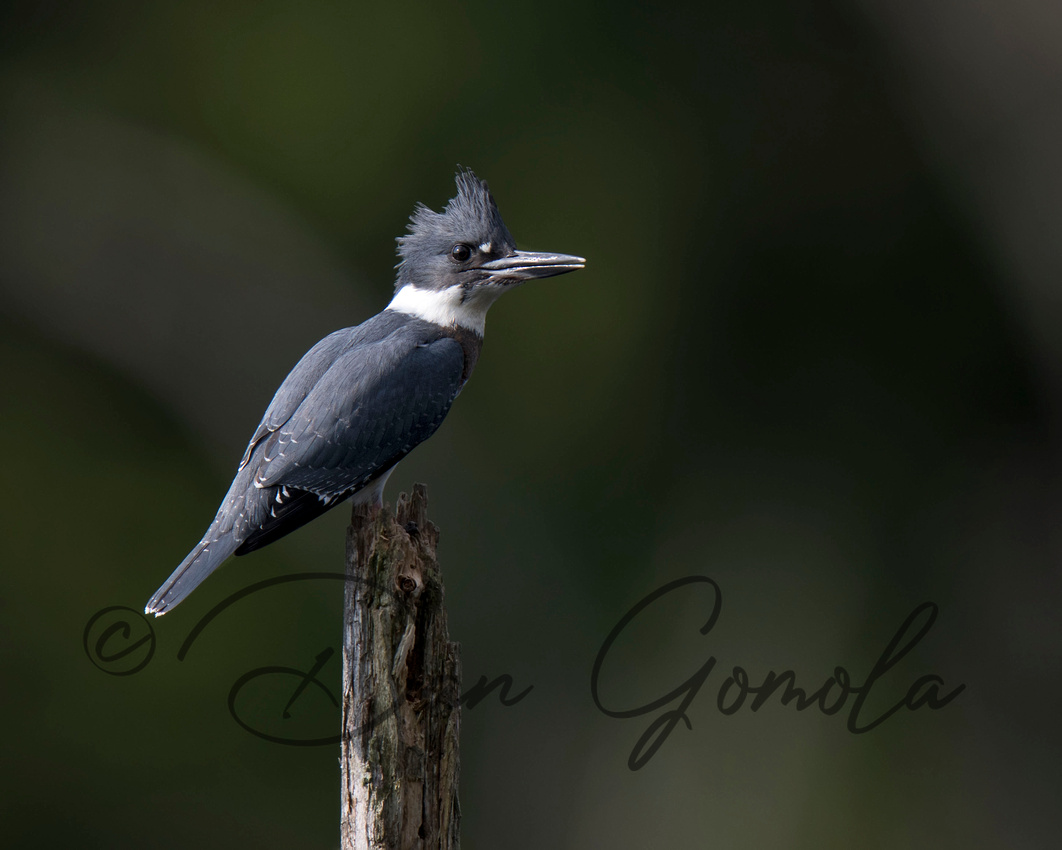 It became alert when it saw potential breakfast in the water.  Eventually, it left the perch to make a catch but, unfortunately, it flew in the opposite direction. 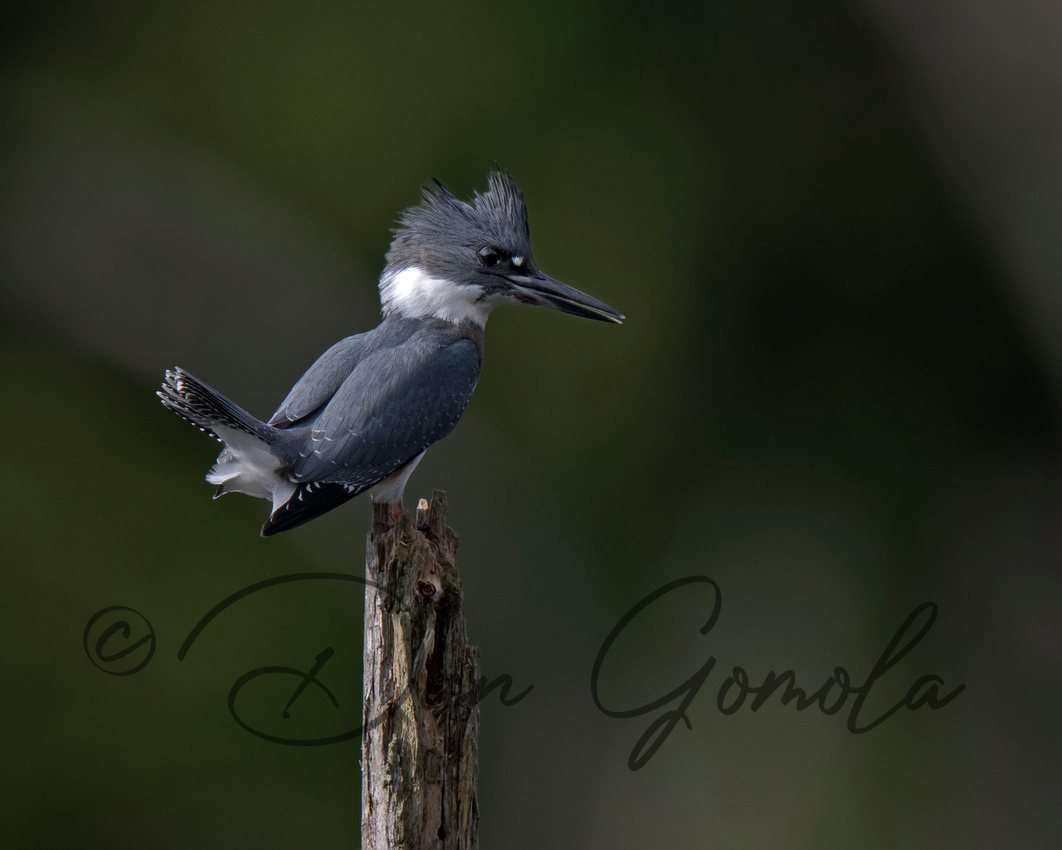 An Eastern Phoebe prefers open deciduous woodlands, forest edges and clearings; usually near water.  They are a flycatcher and do just that.  They perch, usually over water, and watch for insects to fly by.  When they see one, they fly out, catch it, and return to a perch to wait for another.  This little bird didn't seem to worry about me as it perched close by. 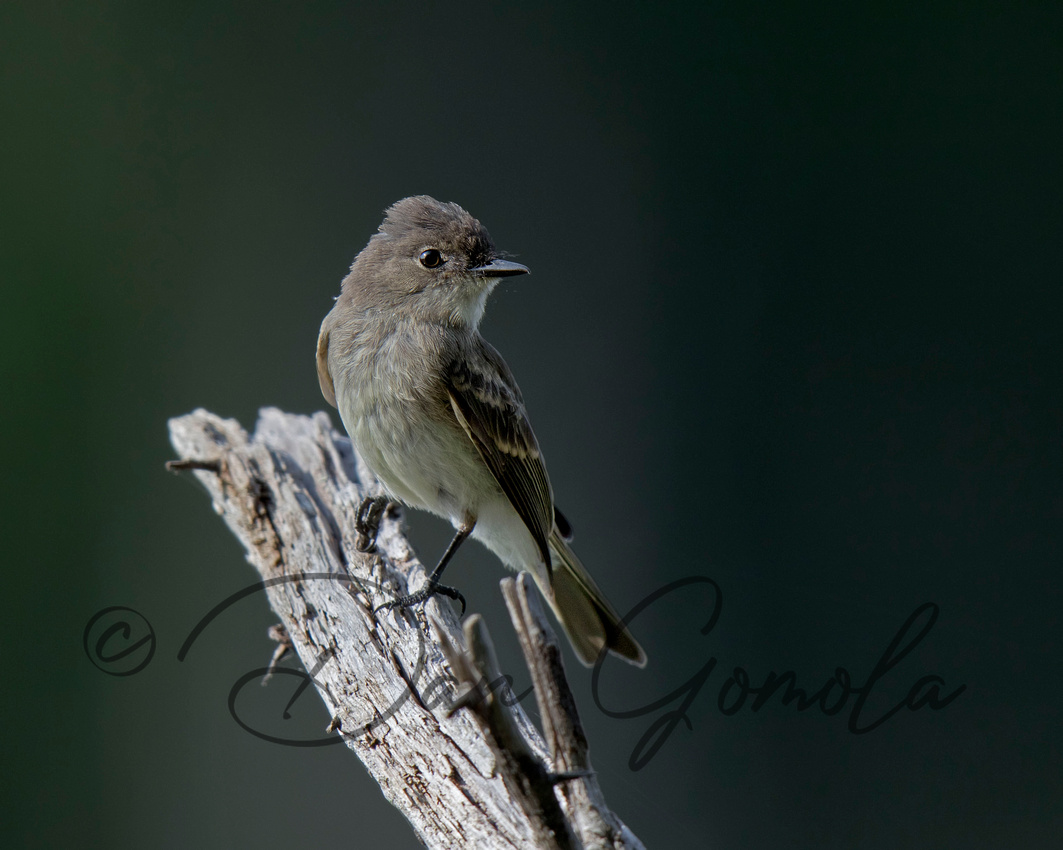 There were a lot of young Wood Ducks swimming throughout the flooded valley and they tend to keep themselves surrounded by vegetation.  Once in a while, however, you can catch one crossing an open area of water like this little female that swam through an opening about 100 yards in front of me.

Here's one more photo of a Belted Kingfisher that was busy patrolling the waters.  This one perched about 25 yards beyond where the first one was. 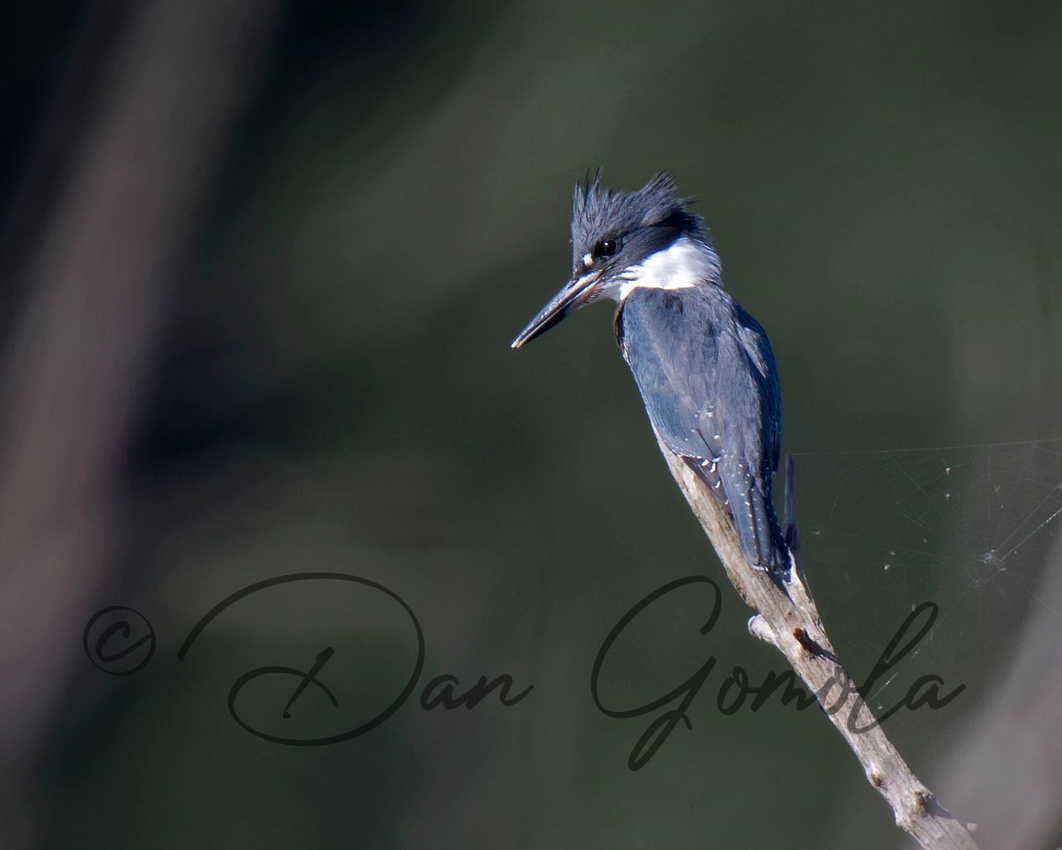 In the evening, when I'm planning where I want to go to photograph wildlife the next day, I have good intentions to be in the woods early.  That doesn't always happen.  After getting up early for work all week long, sometimes I just need to sleep in.  This one Saturday in July was one of those days.  Even though it was sunny and hot outside and it was only 9:00 AM, I decided to just go for a ride in Moraine State Park to see what kinds of birds I can find.  Mornings like that usually aren't very good for wildlife photography as most are under cover from the heat and are not moving around much.  As I drove through a heavily wooded area in the park giving access to a section of the lake that forms a shallow, vegetation filled, cove, I decided to walk down the trail to see if the American Painted Turtles were sunning themselves on the logs protruding out of the water.

Since nobody fishes in this area during the summer, the weeds, thorns, and briar bushes grow over the path making it invisible to a person that doesn't know the area.  I walked slowly, eating blackberries along the way, trying to make as little noise as possible.  Even though the turtles are on a log, in the water, without walking access for predators, they still jump into the water the second they see you.  As I quietly completed the 50 yards walk through the brush, I peeked through the leaves to see a family of juvenile Wood Ducks sitting on the log.  I had to find a suitable opening in the leaves to photograph these beauties because, they, too, would flee if they noticed me.  I was using my Canon 5D MK III full frame camera this morning with a 600 f/4 lens.  There were a total of nine Wood Ducks on the log but I couldn't fit them all in the frame. 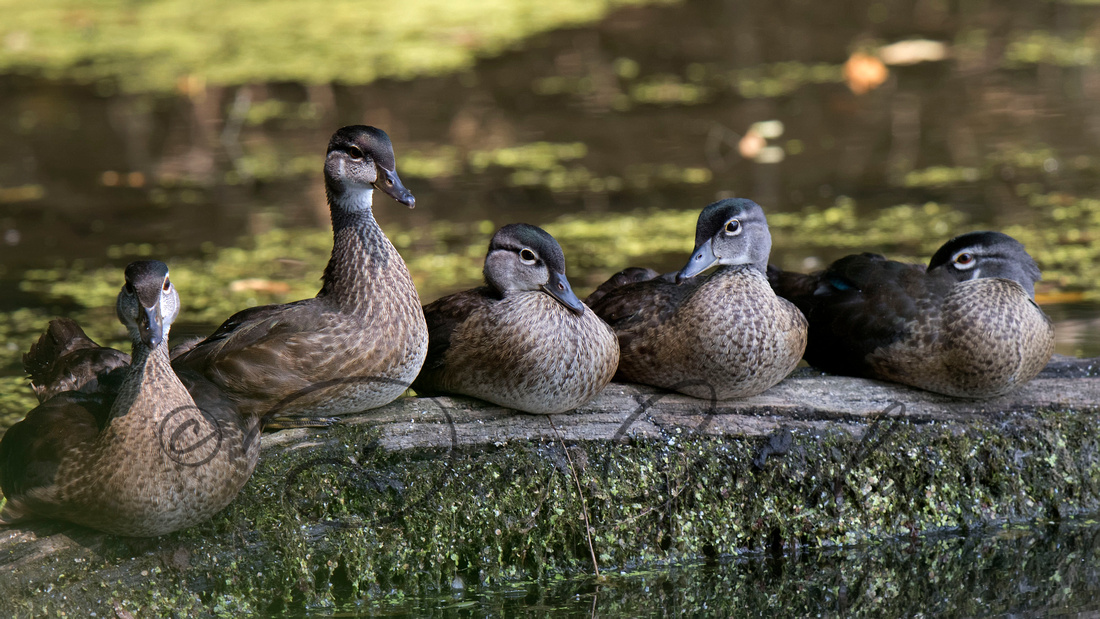 The water was calm making a nice reflection. 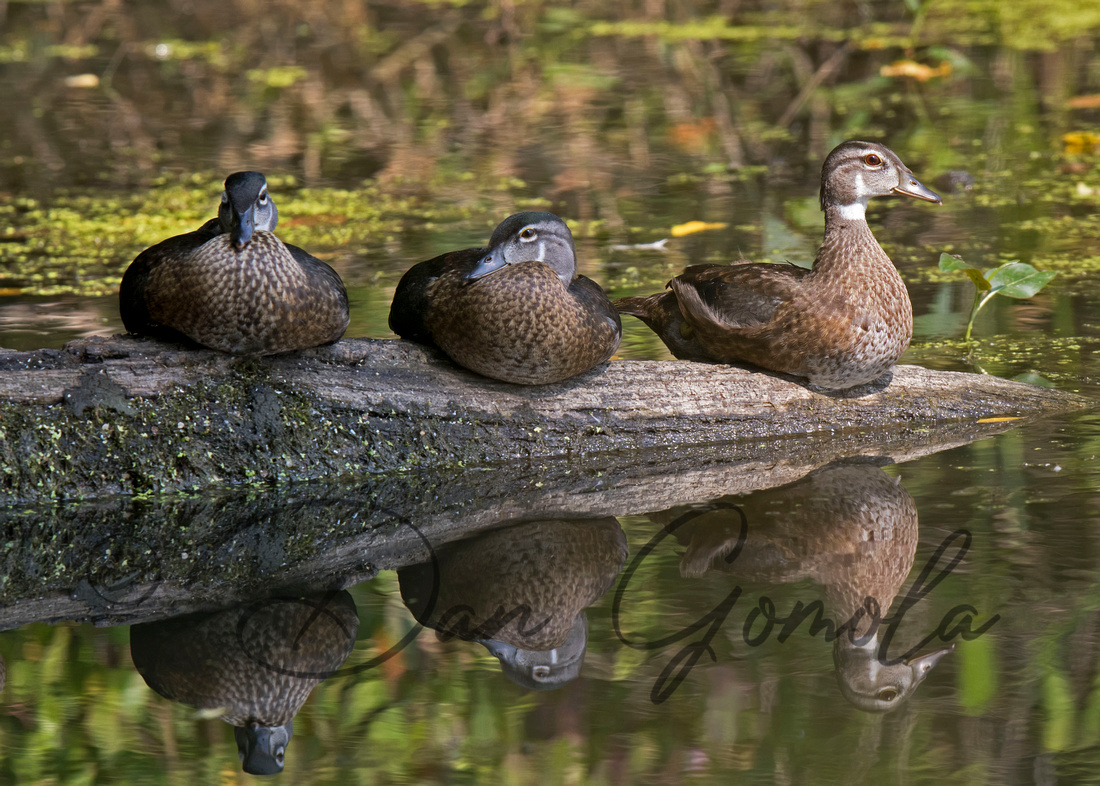 There were two people kayaking about 200 yards away and they were getting closer.  As they approached the cove, the ducks began to stir.  I guess it was time to stretch in case they had to leave in a hurry. 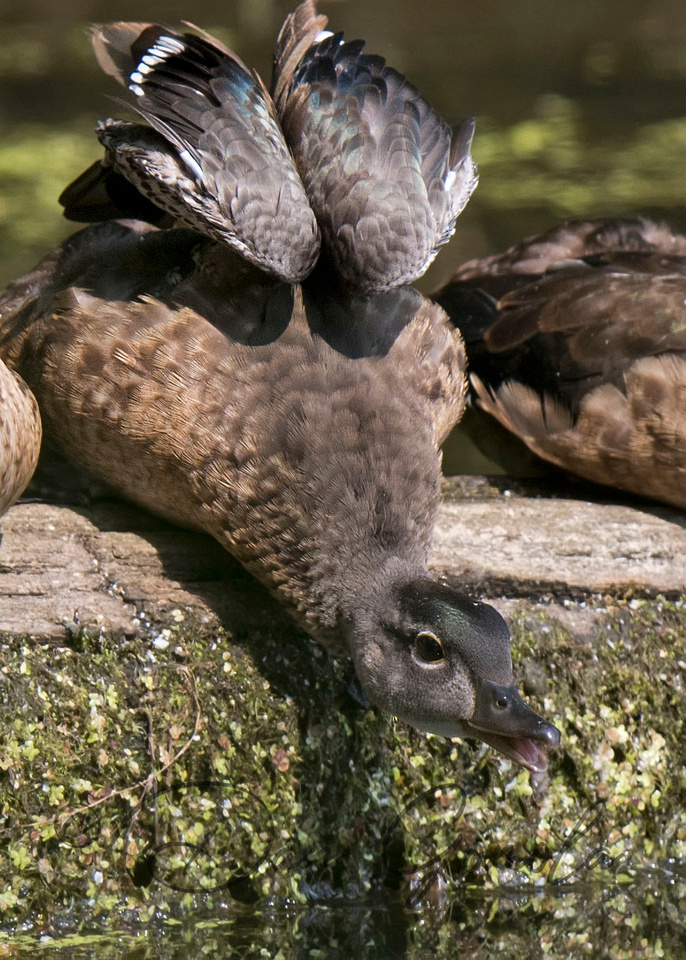 The ducks became curious of the approaching kayaks. 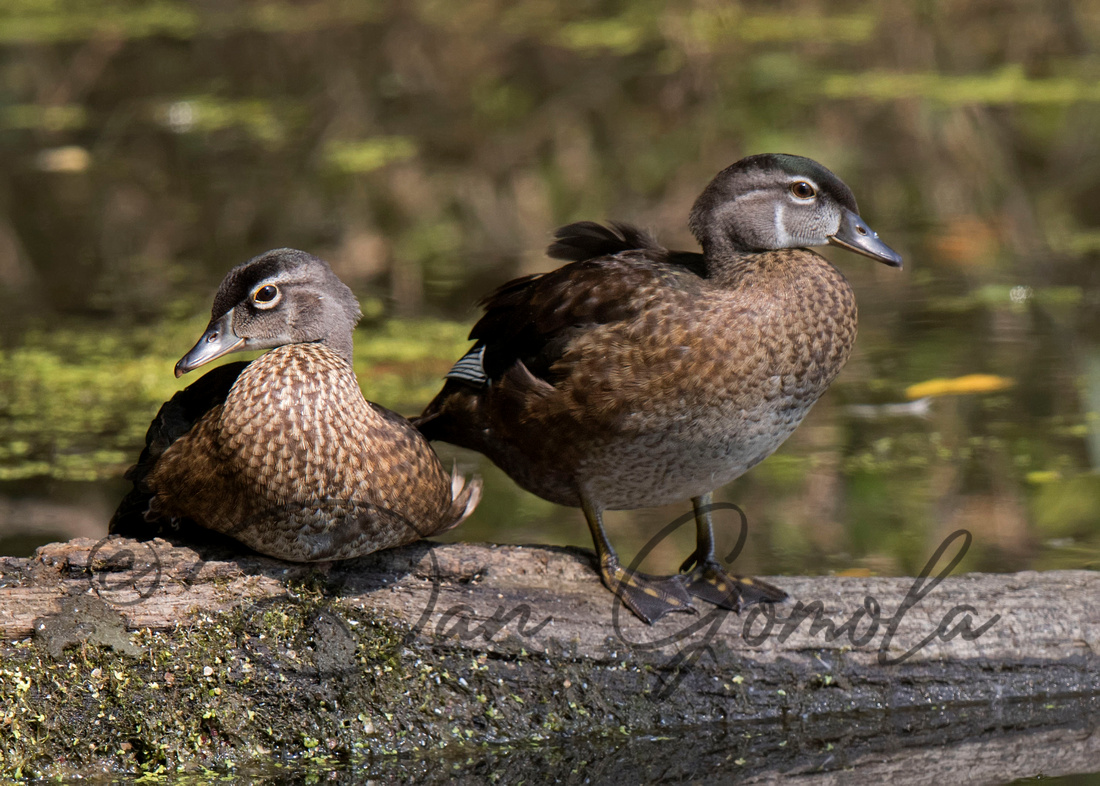 An adult female flew into the cove but didn't land where the juveniles were sunbathing.  She flew over the kayaks while vocalizing her high pitched distress call, "oo-eek, oo-eek, oo-eek, oo-eek".  Obviously, I don't know what she said but her little ones sure did.  Within seconds they began to act anxious, stand, and stretch. 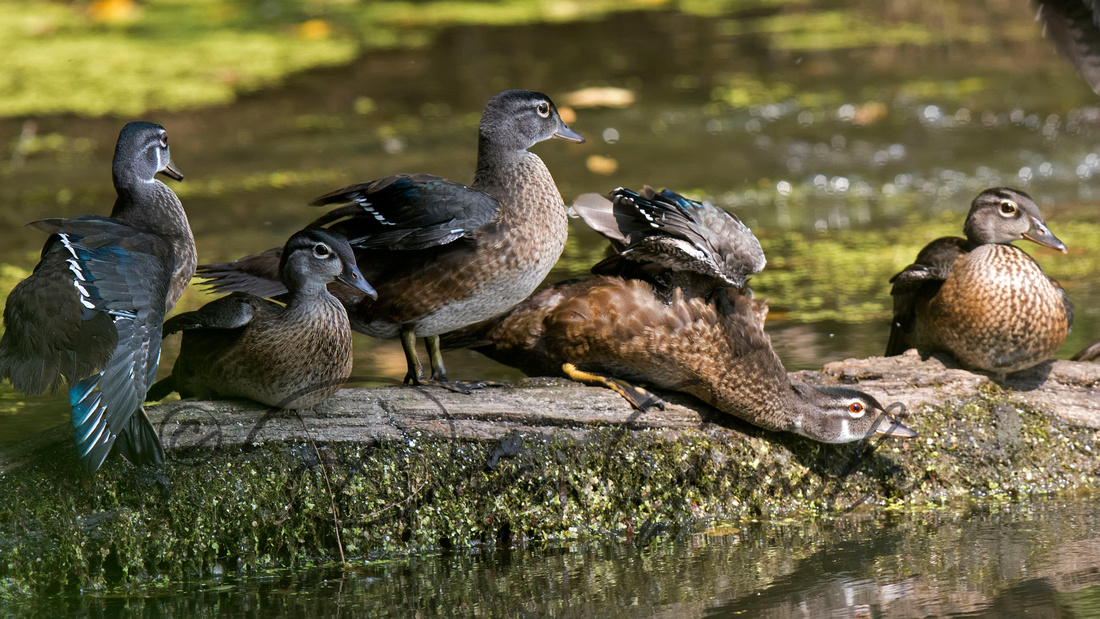 The once sleepy ducks were now more interested in the approaching people.  As I was well hidden and quiet, they were still unaware of me watching them. 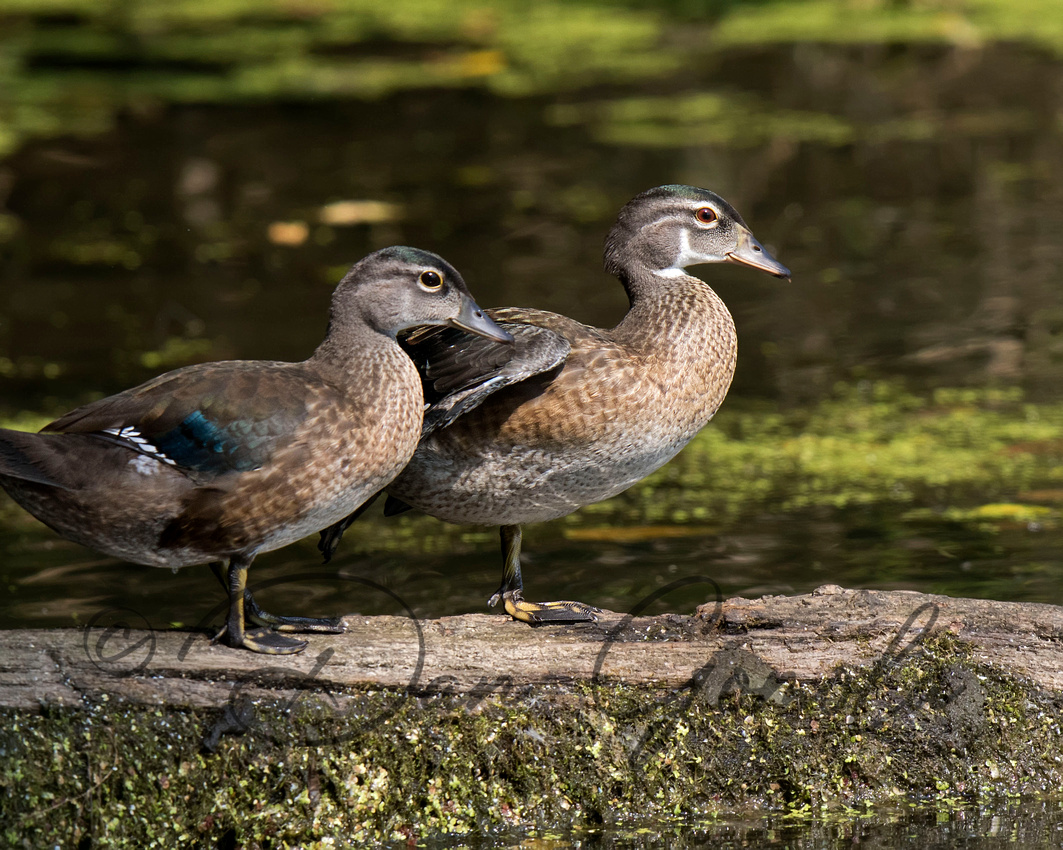 Another stretch from this little male.  Even when they are young, you can identify which ones are the males and females.  The two things I look for are the red eyes and the more prominent cheek markings of the male. 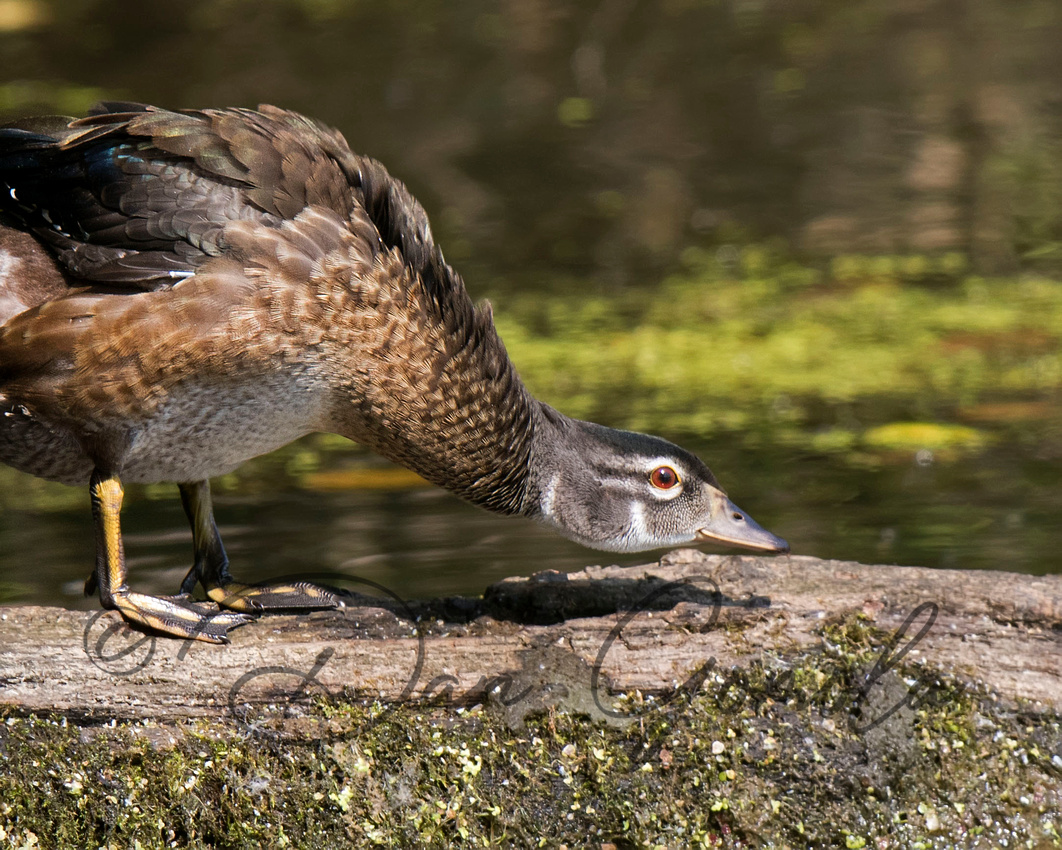 He's hopping on the log as he exercises his wings. 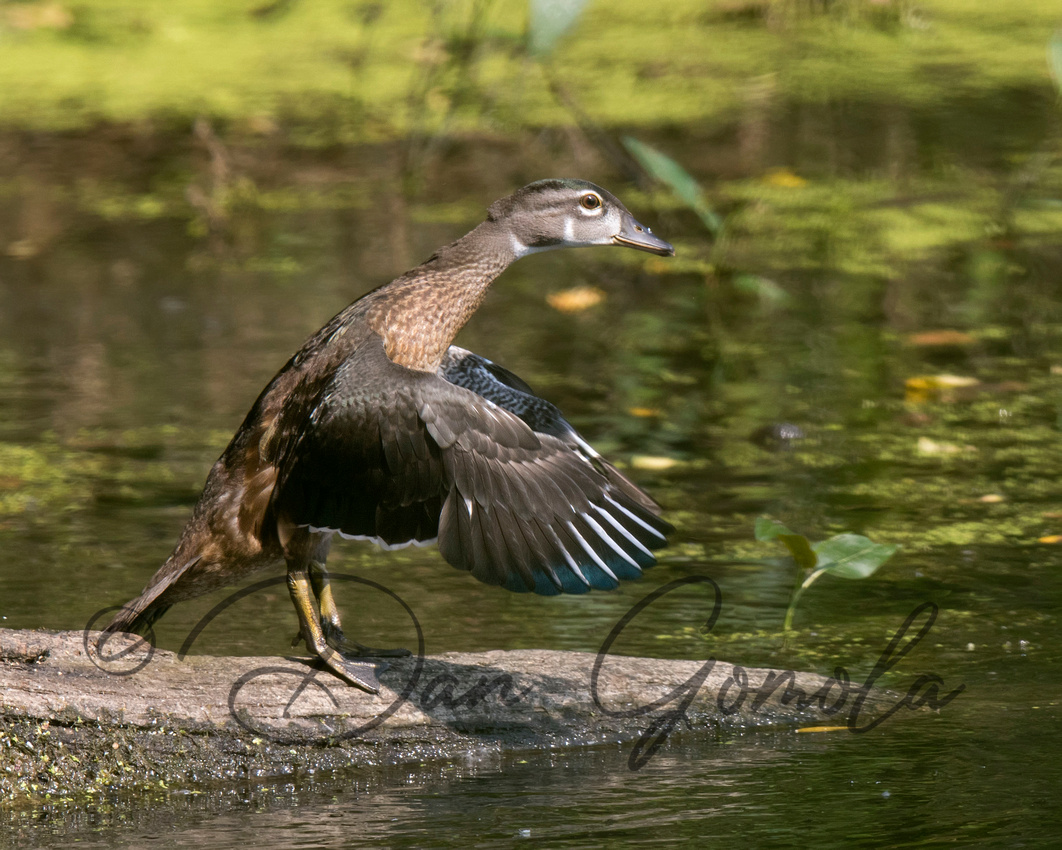 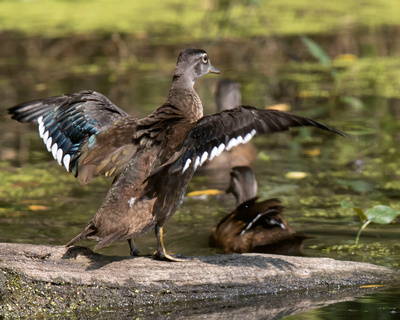 Some stood to flap their wings in place before jumping off the log and swimming into the thick vegetation heading in the direction of the calling female. 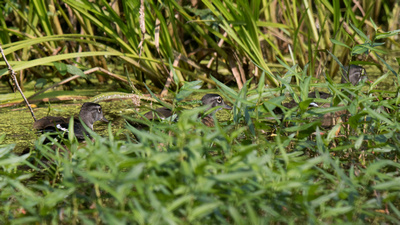 I enjoyed that encounter mostly because I got to witness the communication between mom and babies that humans will never understand.  I spent about 1/2 hour viewing the Wood Ducks before they swam away.  I went into the cove expecting to see turtles sunbathing and came out with these images.  The saying, "expect the unexpected" is something to always keep in mind.

I stood in the same spot for awhile to see if any Wood Ducks or any other waterfowl or herons would come into the cove.  None came.  However, I was greeted, once again, by an Eastern Phoebe.  You can always tell when a male Eastern Phoebe is in the area.  You will hear his raspy call, "fee-bee, fee-bee".  His call is what gives them their name. 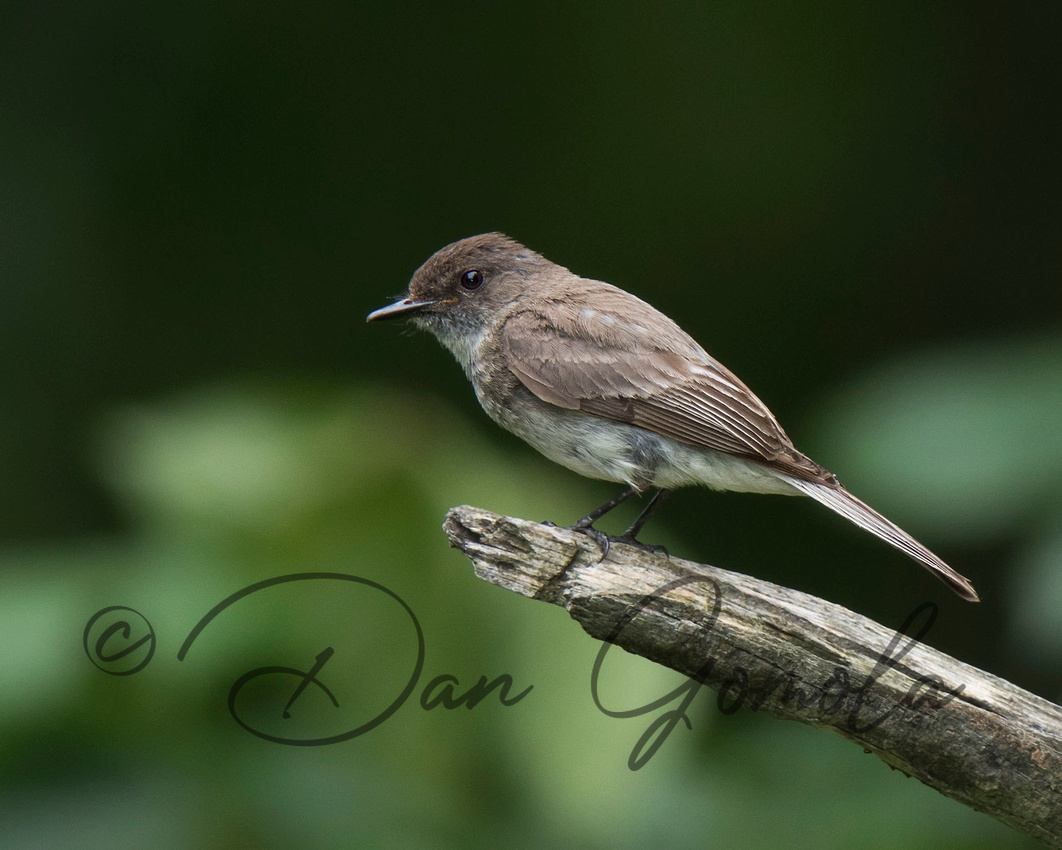 As I continued to explore the shoreline this morning I was surprised to find a Great Egret.  Here in western PA, I usually see them in mid-spring and early fall but not in the middle of the summer. 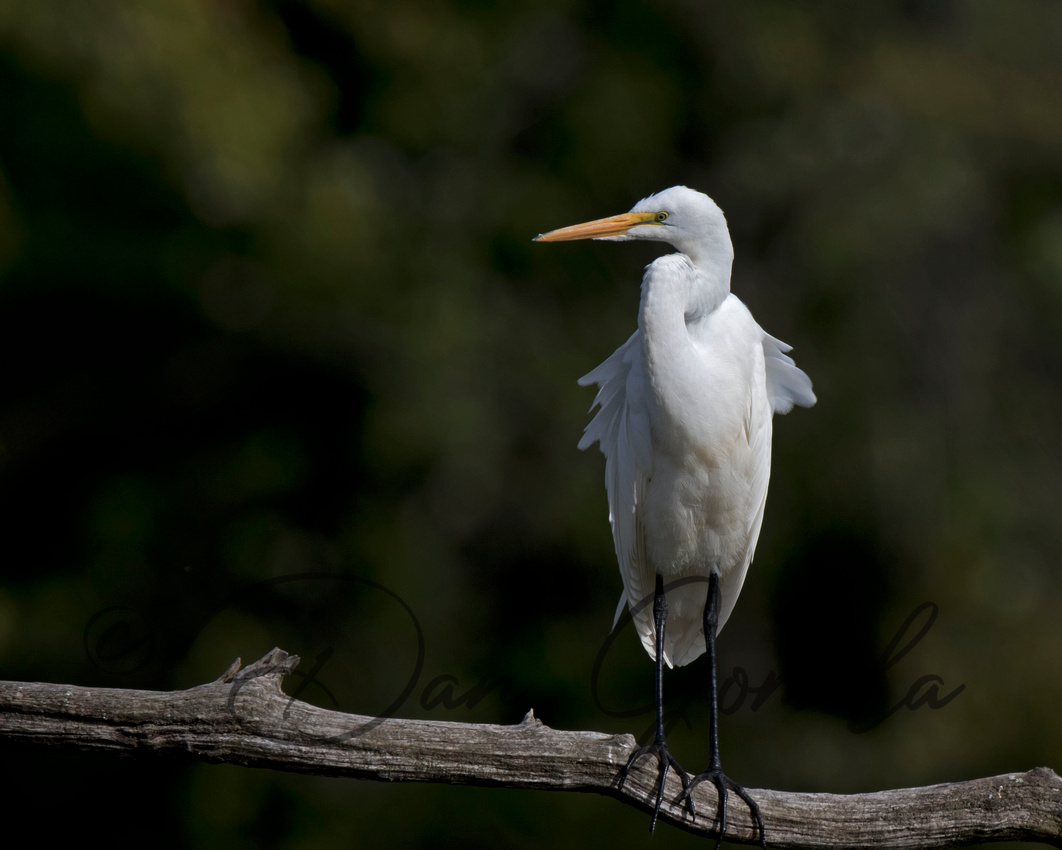 I usually don't photograph a lot of waterfowl outside of the waterfowl migration periods.  This female Mallard Duck was allowing me to photograph a portrait, so I couldn't pass it up. 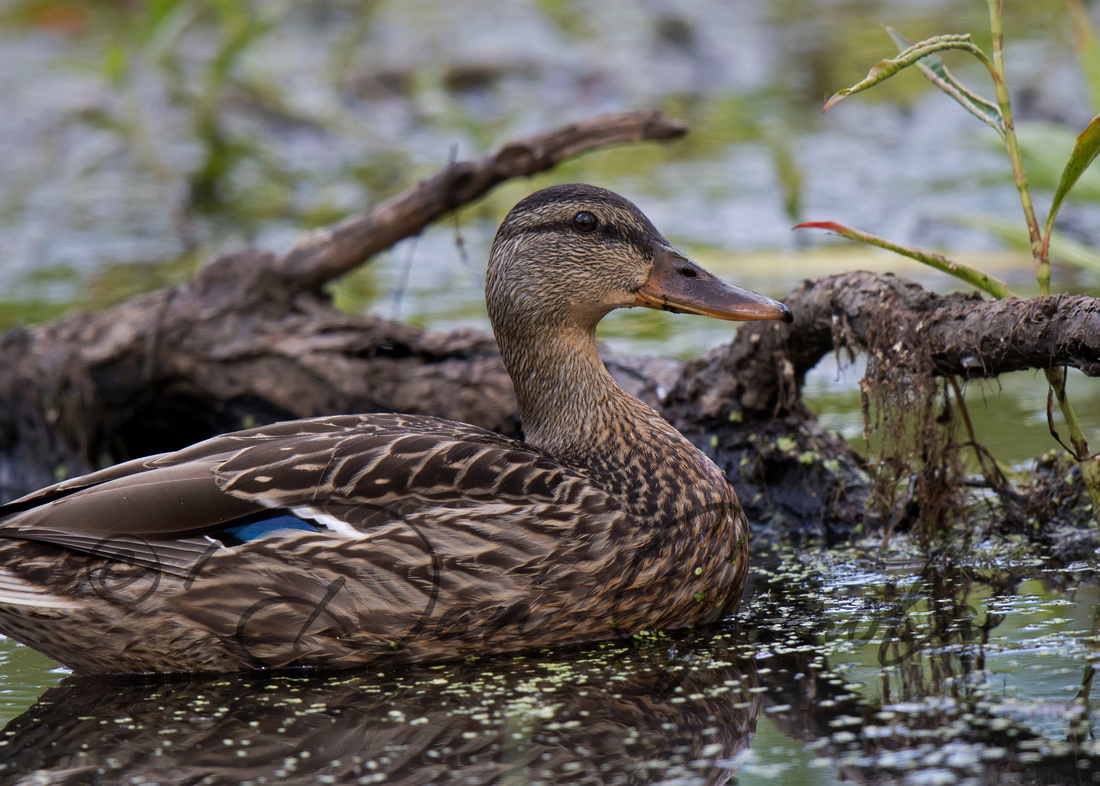 Thanks for looking and, as always, comments are welcome and encouraged.

Jeff Sidle(non-registered)
I much enjoyed your story and accompanying photos. Well done!
Willard Hill(non-registered)
An exceptional series of photographs, Dan. I am really impressed with the sharpness and composition.
Coy(non-registered)
Lovely post! The photos are all excellent however I am most impressed with the captures of the wary belted kingfishers.
Dan Gomola(non-registered)
Thanks Paul and Rhonda for the nice comments. I wish Zenfolio provided a way for me to reply to comments and you would get notified but they don't. Hopefully, you'll come back and see this. Thanks again.
Rhonda B(non-registered)
Dan - I just love the first wood duck surrounded by the colors reflecting from the foliage. Something about that photo speaks to me very clearly. Its so important that humans learn to respect, maintain, and preserve natural habitat. In doing so we preserve our own souls. Thank you so much for the wood duck series. I used to quietly watch my chicks and their mother hen communicate and learned so very much. Even Daddy Rooster communicated very clearly to the chicks - and they listened! Thank you for sharing your wonderful talent!
No comments posted.
Loading...
Subscribe
RSS
Recent Posts
Sandhill Crane: New Life in a Western Pennsylvania Marsh White-tailed Deer Favorites of 2020 Big Bulls and Hot Cows in Elk Country Unpredictable Pennsylvania Sparrows: Henslow's and Clay-colored 2020 Warbler Wrap-up No More Warbler Neck Loiusiana Waterthrush - Stream Lurker Striking Gold in a Pennsylvania Wetland Midnight Blue Lil' Bandit
Keywords
White-tailed Deer bald eagle American Elk Benezette Common Yellowthroat Lake Arthur Moraine Great Blue Heron Wood Duck Yellow-rumped Warbler
Archive
January February March April May June July August September October November December
©Dan Gomola
Powered by ZENFOLIO User Agreement
Cancel
Continue