To Seize or Take By Force

July 09, 2015  •  2 Comments
Birds of prey, also known as raptors, hunt and feed on other animals. The term "raptor" is derived from the Latin word rapere, which means to seize or take by force.  One thing raptors have in common is keen vision that allows them to find prey during flight, and powerful beaks and talons.


I have photographs of three different species of raptors that I saw this spring.  I thought a good way to share them is in a photo blog about raptors.

One of my favorite activities in the spring is watching nesting Bald Eagles.  Over the last few years, I've photographed and posted in my blog, several nests of Bald Eagles.  The eagle in the photo below was facing the wind, flapping, and jumping up and down.  Soon it will be branching, the ability to take long hops to nearby branches and back, and then ultimately, flying. 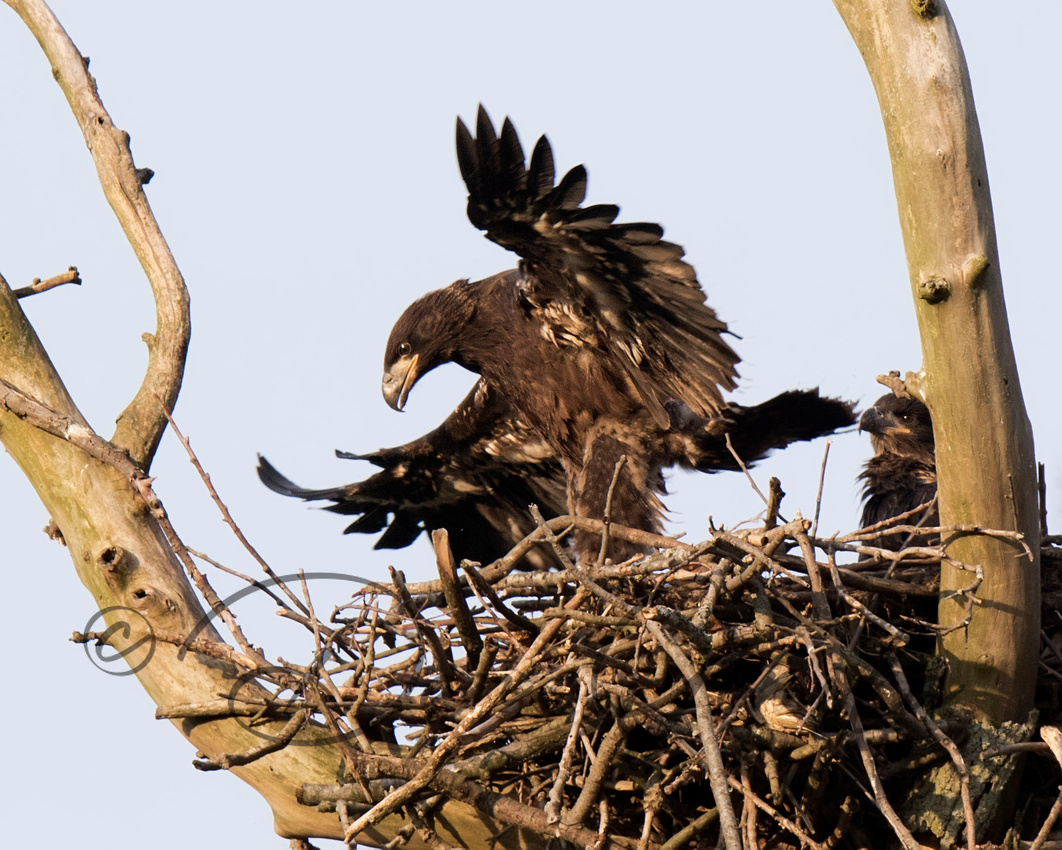 As the eaglets grow, their parents stay away from the nest for longer periods of time.  On this day, my wife, Elena, and I waited for about three hours to photograph interaction between an adult and the eaglets.  The setting sun had already dipped below the nearby hills when the adults came back to the nesting tree. 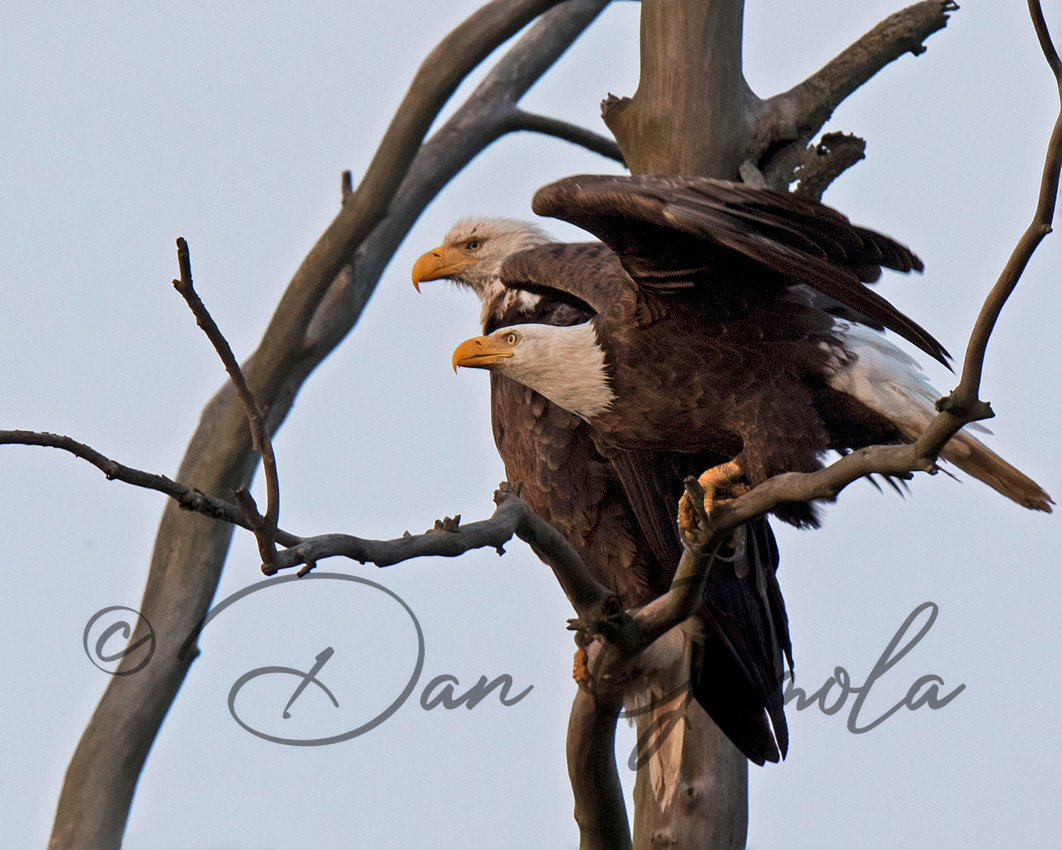 Bald EagleThese are the parents of the Columbiana Eaglets. This image was made about 5 or 10 minutes after the evening sun dipped behind the nearby hills. When the eaglets are close to fledging, the parents seem to stay away from the nest a little longer.

The parents, proudly perched above the nest, rest as the sun continues to set on another day. 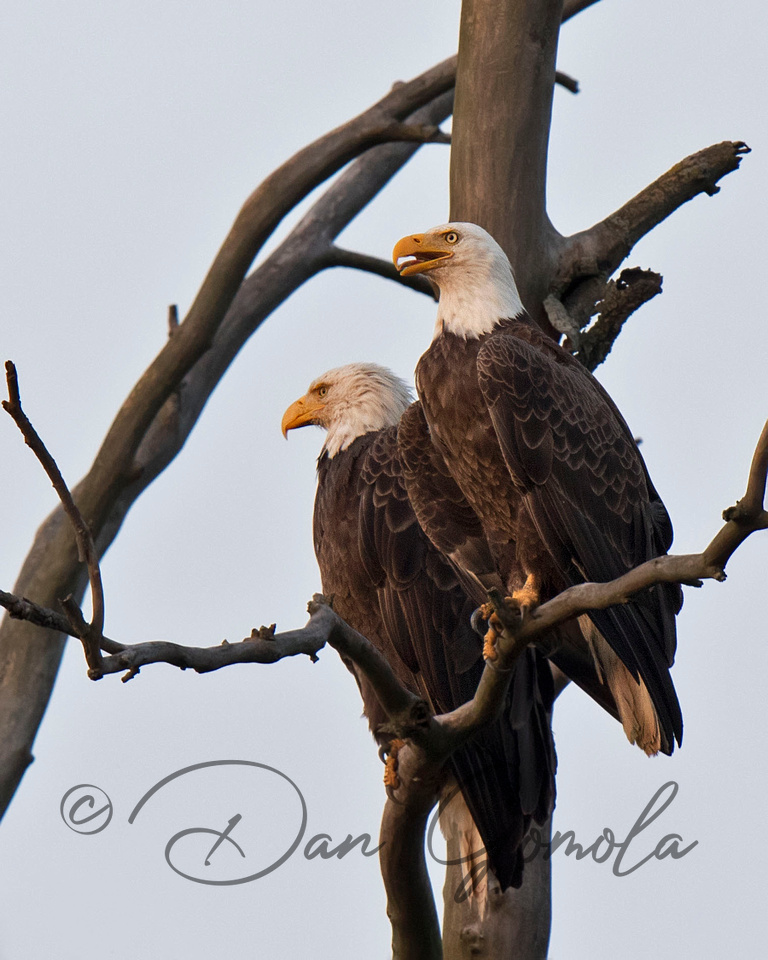 Bald EagleThese are the parents of the Columbiana Eaglets. This image was made about 5 or 10 minutes after the evening sun dipped behind the nearby hills. When the eaglets are close to fledging, the parents seem to stay away from the nest a little longer.

During the 11 to 13 weeks it takes for an eaglet to reach the developmental milestone called branching and then later taking their first flight, there is definitely some downtime.  I spent quite a bit of time watching a few eagle nests this spring waiting for something exciting to happen like mom or dad bringing food to the nest.  I don't know who would have been happier, me or the eaglets.  Below is a 41 second video that represents an afternoon of nest watching. Eaglets on Nest

Boring?  Not for a second.

On a side note, don't always look for eagles in trees.  Many times they are found close to, or on the ground, as I found this Bald Eagle perched on a stump in a swamp. 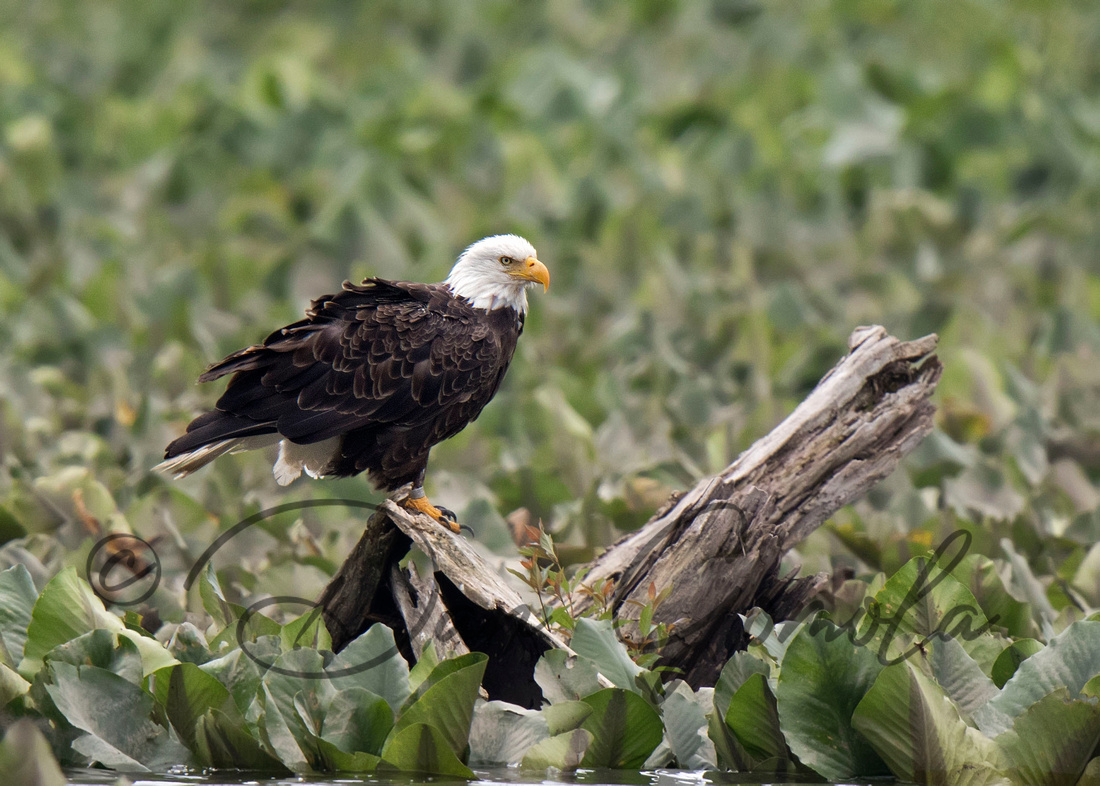 The Osprey is unique among raptors in its diet for fish and its ability to dive into the water at high speeds to catch them.  I found the Osprey in the photo below perched in a tree near the shoreline of Lake Arthur at Moraine State Park in western Pennsylvania. 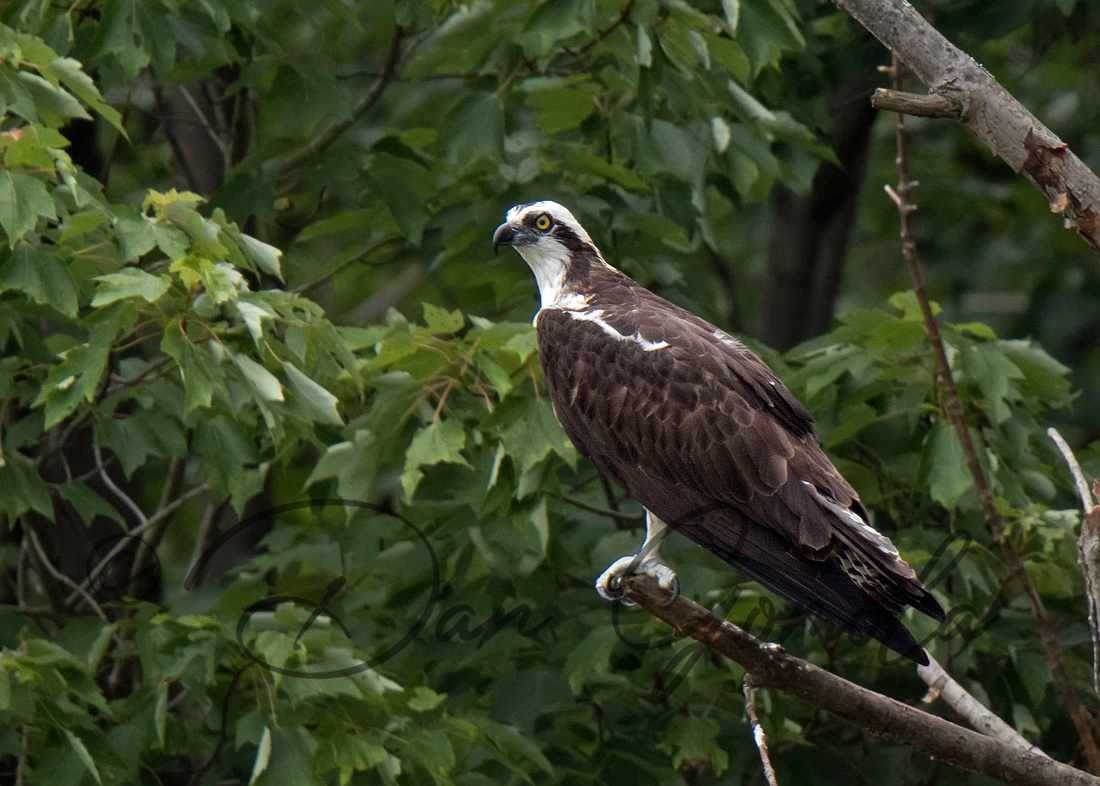 Northern Harriers, although not related to owls, are the most owl-like of hawks.  Although they have sharp vision like other raptors, they also use their hearing to capture prey. Much like an owl, the stiff facial feathers on their face helps to direct sound to the ears. 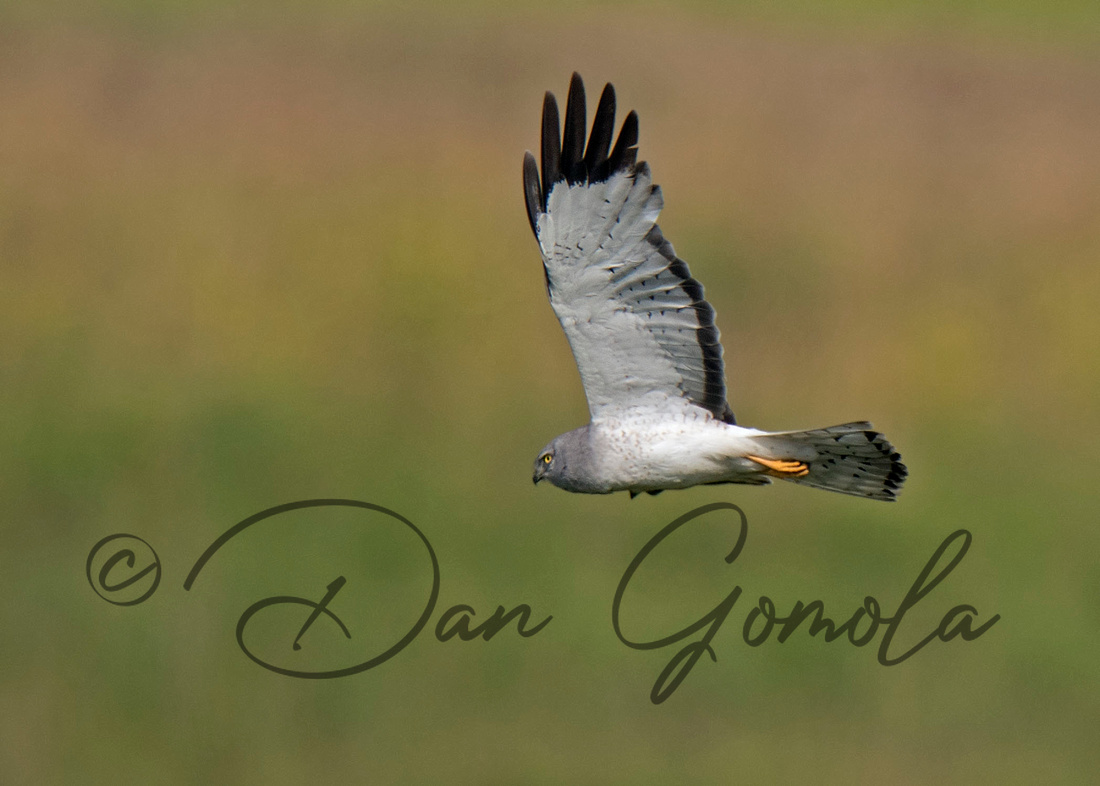 With a wingspan of 40 to 46 inches, you are most likely to notice Northern Harriers when they are flying.  I watched this one flying low to the ground in a circular flight style. 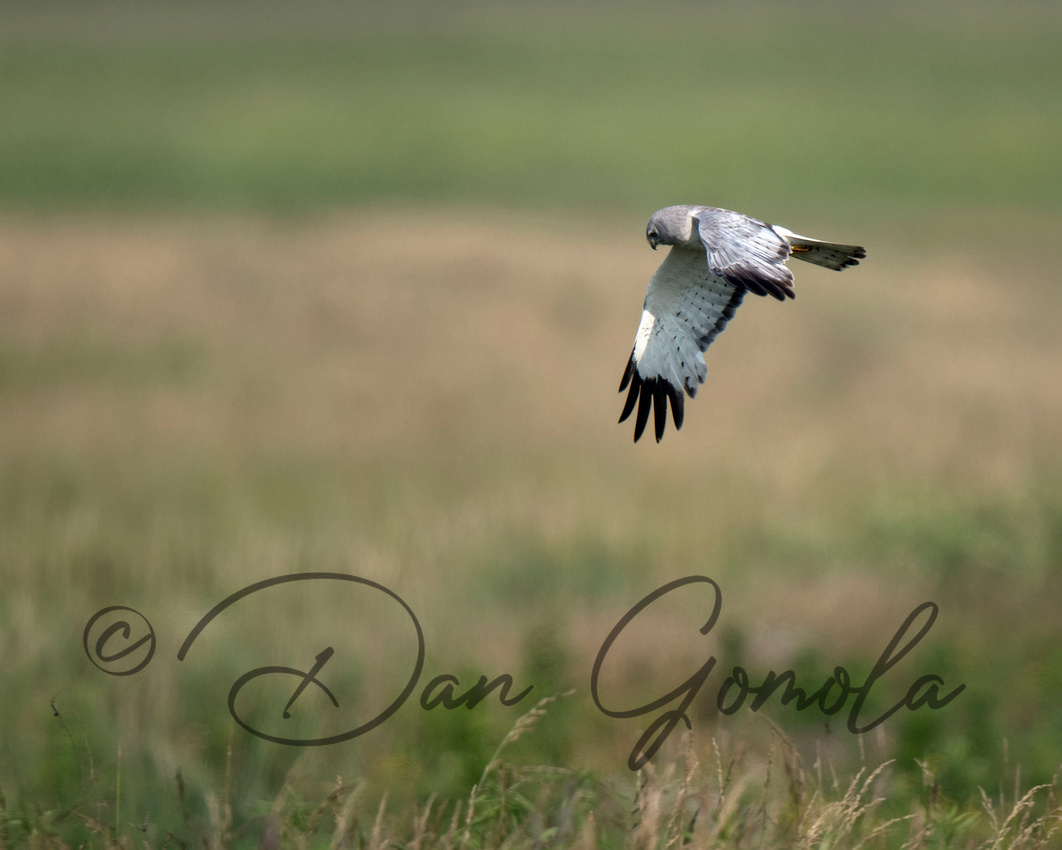 When they see or hear a rodent on the ground, they amazingly flip and dive to the earth. 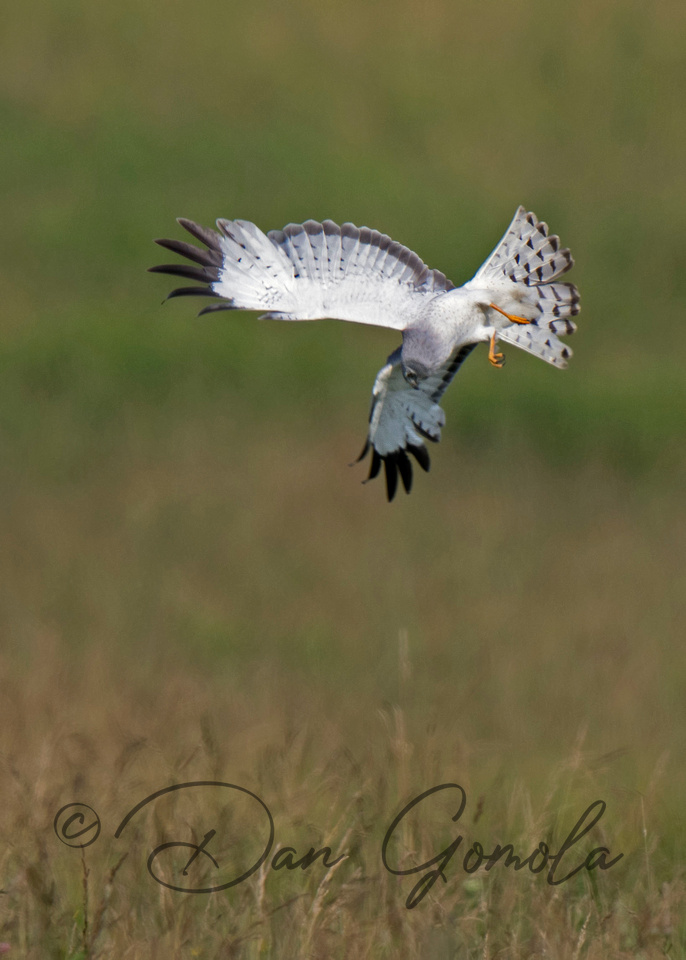 Northern Harriers are common but their numbers are declining.  They do have an interesting history.  Northern Harrier fossils dating from 11,000 to 40,000 years ago have been unearthed in northern Mexico.

That makes me think of the question... If they have been around for the last 40,000 years, what are we doing to this earth that puts them on the decline now?

Mike(non-registered)
Great photos! I would never have the patience
Willard Hill(non-registered)
I don't blame you for photographing birds when you have such great opportunities to do so. The shoe is on the other foot with me and it seems I mostly photograph mammals and most of those are either deer or elk. I spend little time specifically after birds, but I love to see the photographs and usually try to film them when I have an excellent opportunity. At any rate your photos are excellent and I do not tire of seeing them.
No comments posted.
Loading...
Subscribe
RSS
Recent Posts
Great Smoky Mountains 2022 Sometimes, I Like To Shoot Video For the Love of Whitetails Owl Encounters of Early 2021 Pennsylvania Magazine - Meet the Missus 2021 Elk Pre-Rut and Rut Encounters Great Smoky Mountains: My Cades Cove Experience (2021) - Part Three Great Smoky Mountains: My Cades Cove Experience (2021) - Part Two Great Smoky Mountains: My Cades Cove Experience (2021) - Part One Sandhill Crane: New Life in a Western Pennsylvania Wetland
Keywords
white-tailed deer Bald Eagle American Elk Benezette Common Yellowthroat Lake Arthur Moraine Great Blue Heron Wood Duck Wild Turkey
Archive
January February March April May June July August September October November December
©Dan Gomola
Powered by ZENFOLIO User Agreement
Cancel
Continue