Escaping the Gravity of Life

Autumn is the perfect time to escape from it all and talk a walk in nature.  It isn't hot and humid nor is it too cold.  The insects of summer won't be circling your head nor will Jack Frost be nipping at your nose.  The wildlife may get a little easier to see because of the fallen leaves and some birds will be more plentiful because of their migration path.

Before I continue with more photo blogs about the White-tailed Deer rut, I'd like to share more photos of our beautiful wildlife found during my time in the field.

Sometimes hawks are difficult to identify when they are young.  One really needs to know their birds to be able to differentiate between a young bird or an adult of another species.  Usually, Red-tailed Hawks are pretty easy to identify because of their red tail.  The Red-tailed Hawk in the image below is a juvenile, therefore, it doesn't yet have a red tail. 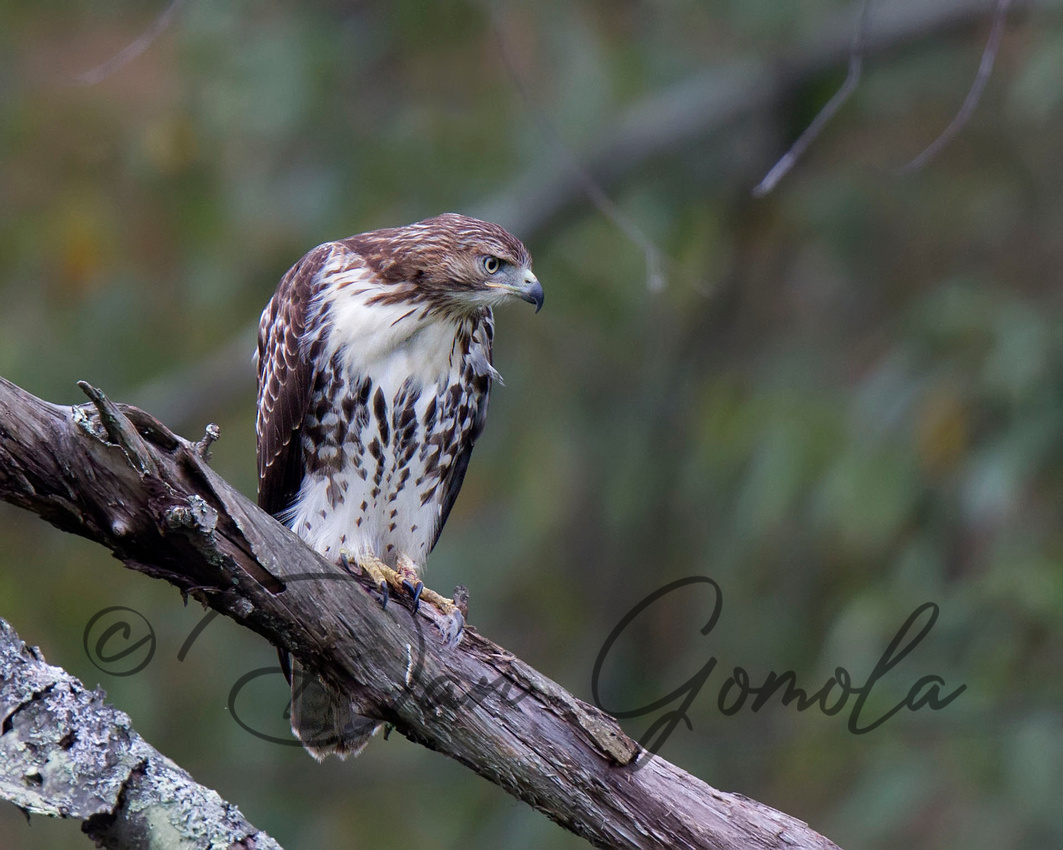 Although the Northern Waterthrush looks a lot like a thrush, it is actually a wood-warbler.  Wood warblers are New World birds, distinct from the true warblers of the Old World.  Usually, this bird would be found, if you can find one, on the shores of deciduous swamps or the swampy ground of coniferous bogs.  In the spring and fall, when there aren't as many insects, you may find them in drier areas, in parks, backyard ponds, and trails.  I found this Northern Waterthrush at the edge of a swamp in a tangle of shrubs this fall. 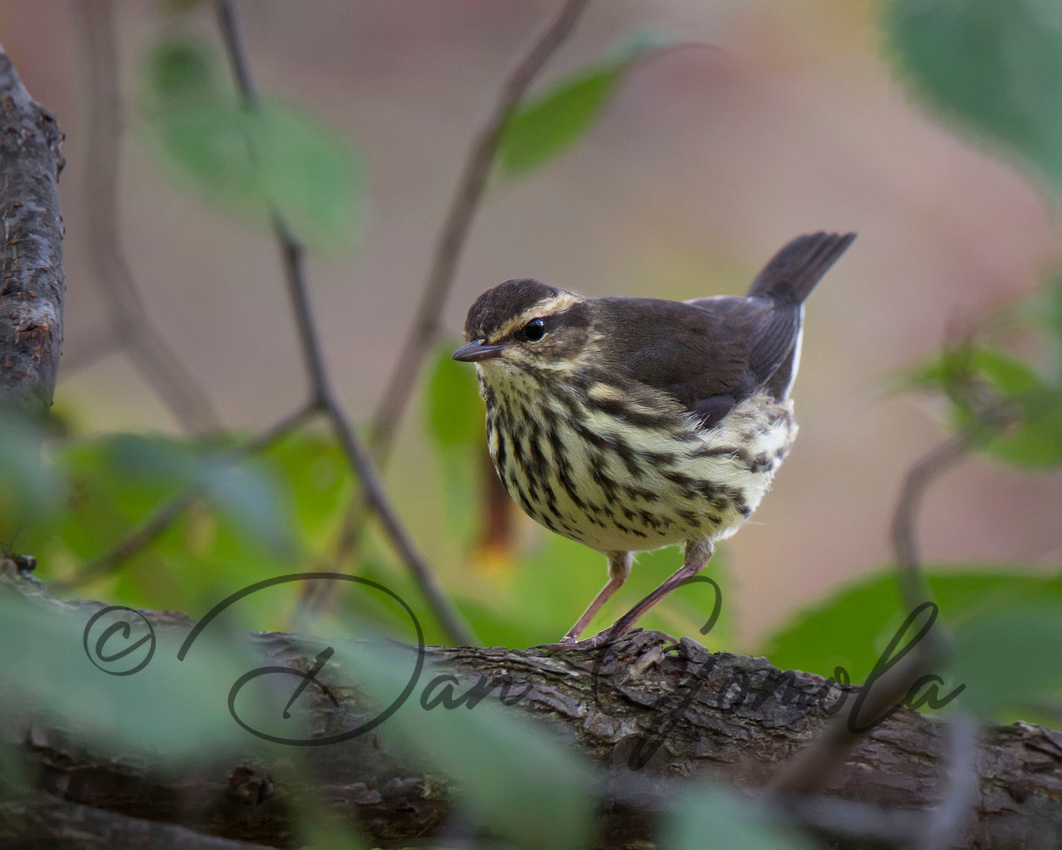 The Lincoln's Sparrow bears the name of Thomas Lincoln, a young companion of John J. Audubon on his voyage to Labrador, Canada.  They breed in Canada and spend the winter in the southern United States and Mexico.  They rarely sing during their migration stay in Pennsylvania. 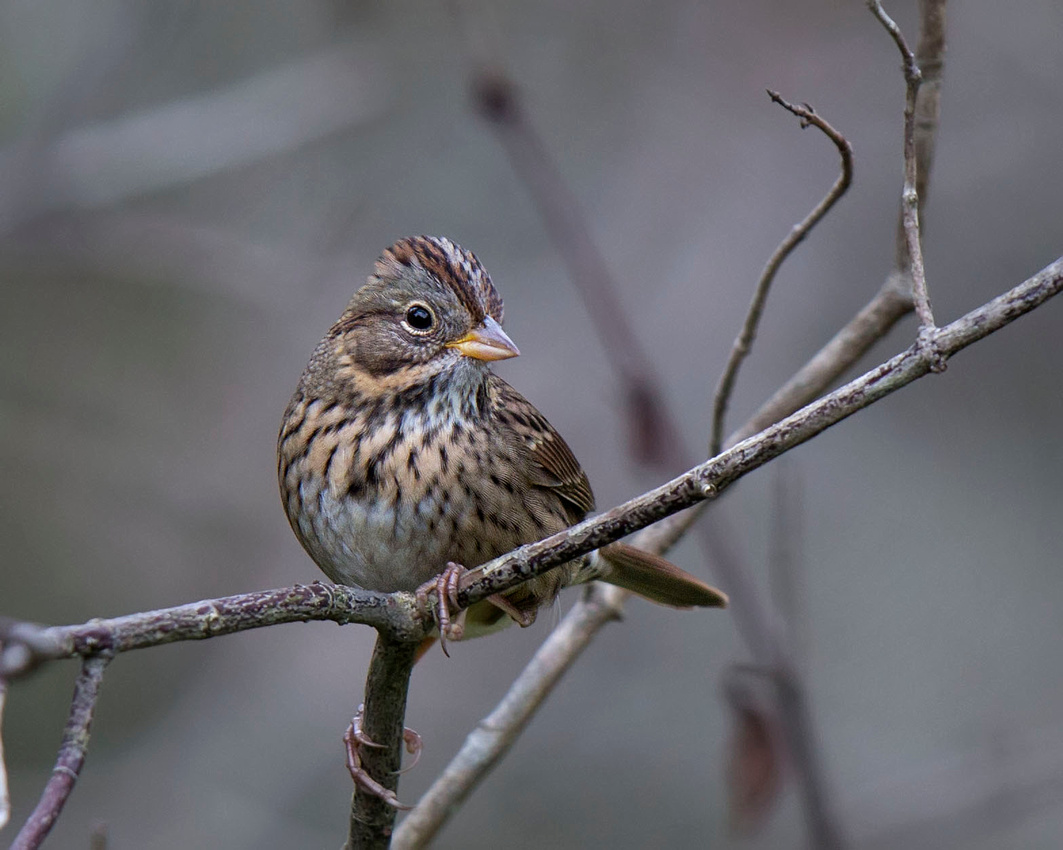 I love the soft, feathered look of the Eastern Phoebe. 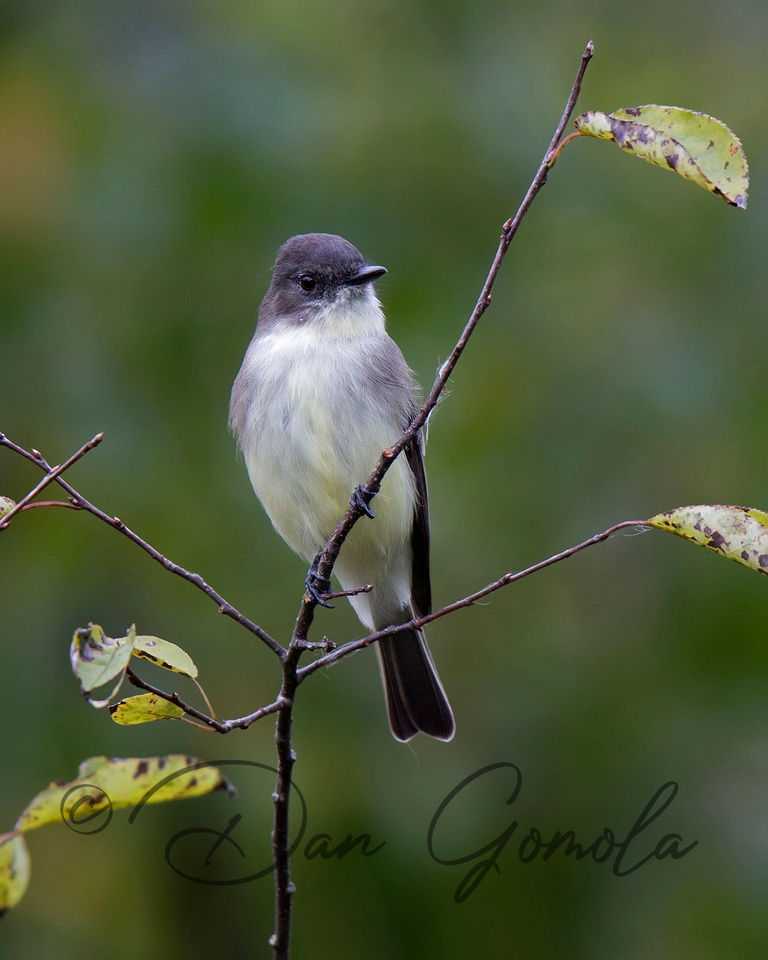 Pennsylvania is the northernmost range of the White-throated Sparrow's winter home.  Most of their breeding ground is in Canada. 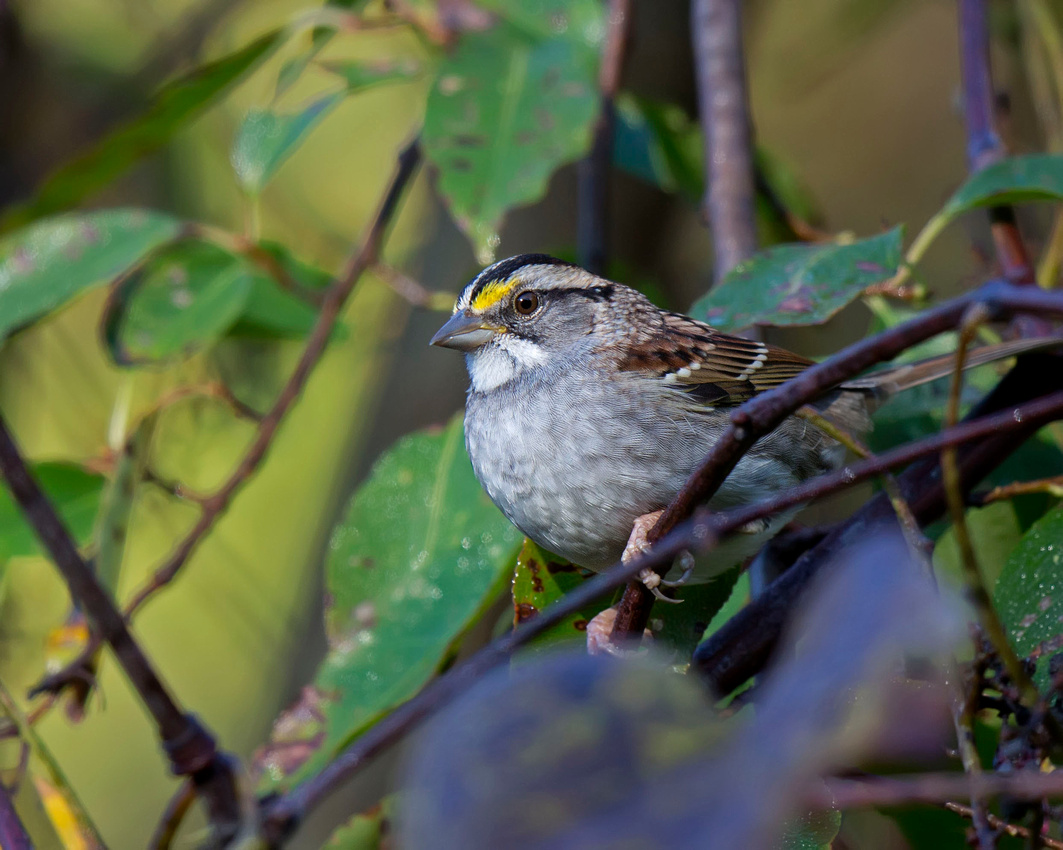 Sometimes, I'm being watched too.  This little Red Squirrel waits patiently, in hiding, until I pass through. 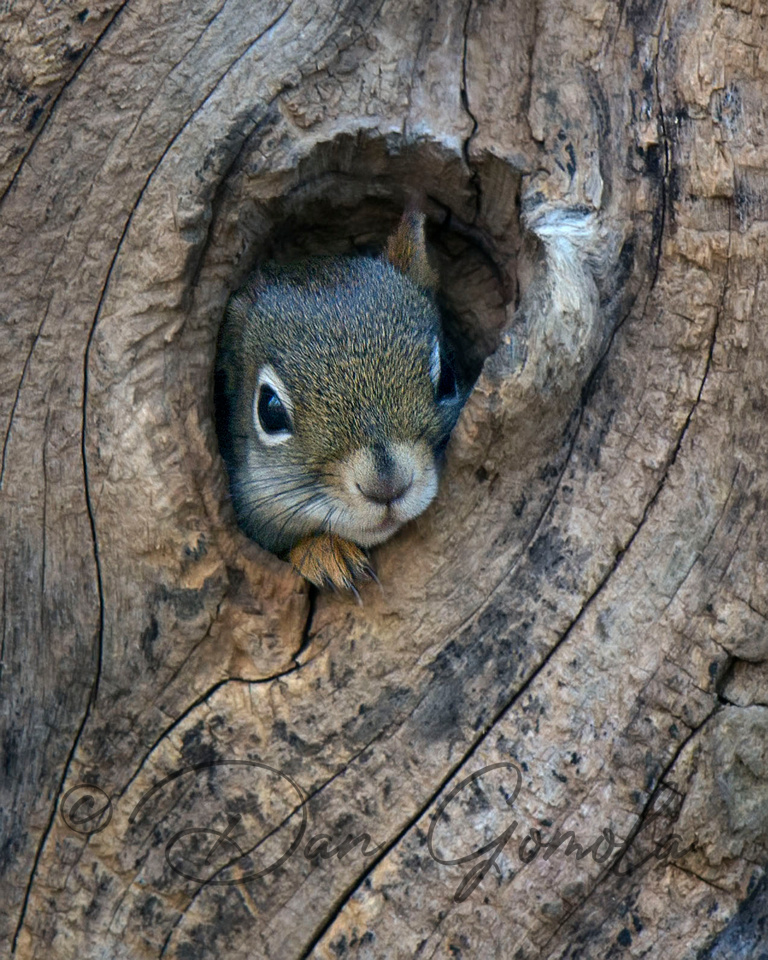 Similar to the longer tailed, paler House Wren, is the Winter Wren.  The Winter Wren is most identified by the short, upright tail. 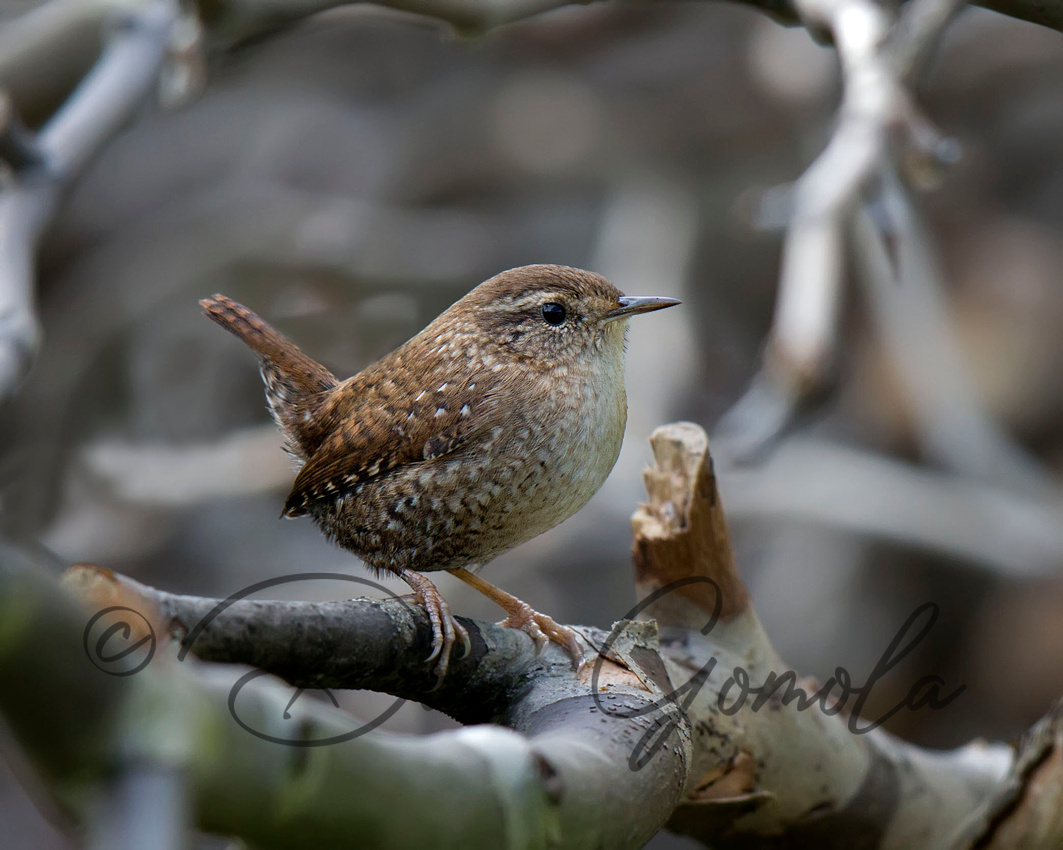 The Hermit Thrush is usually pretty difficult to find.  Although the photo below isn't as good as some others I have of the Hermit Thrush, it does demonstrate how they can blend into their surroundings easily. 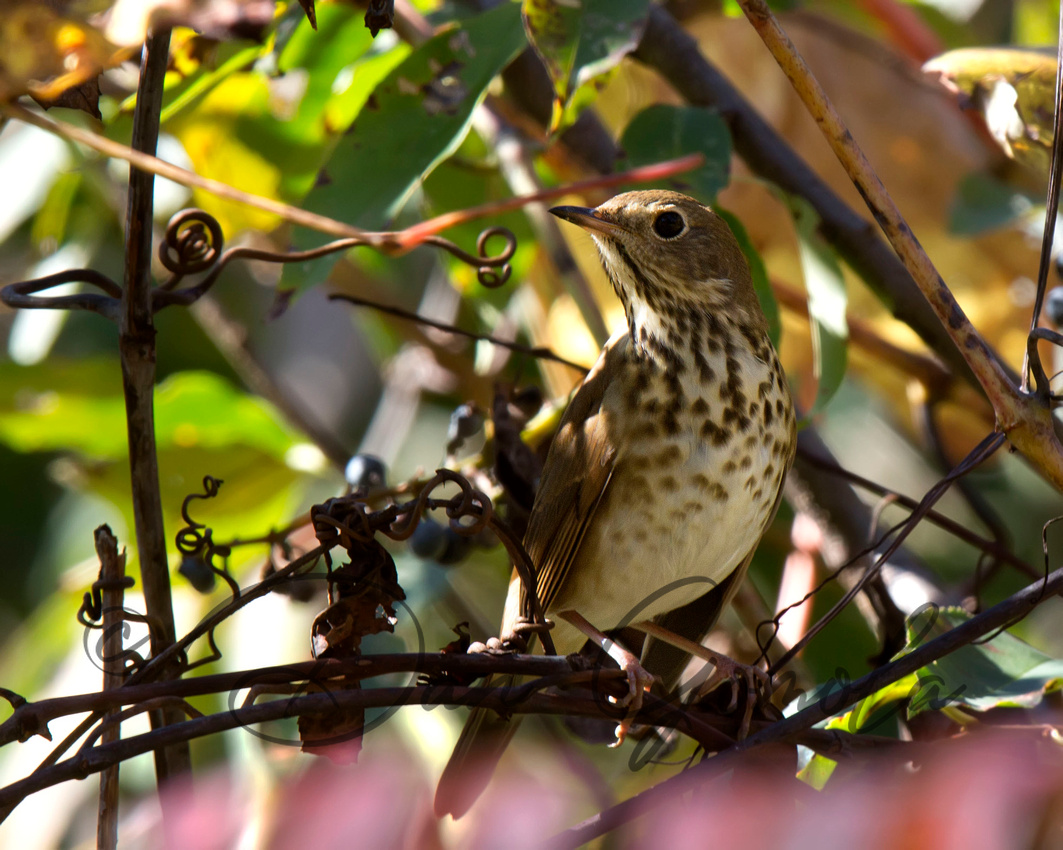 Yellow-rumped Warblers flood our region (western Pennsylvania) in spring and fall.  Their breeding range and winter range come very close together with most of western Pennsylvania being in their migration route, at least according to Cornell Lab of Ornithology's range map. 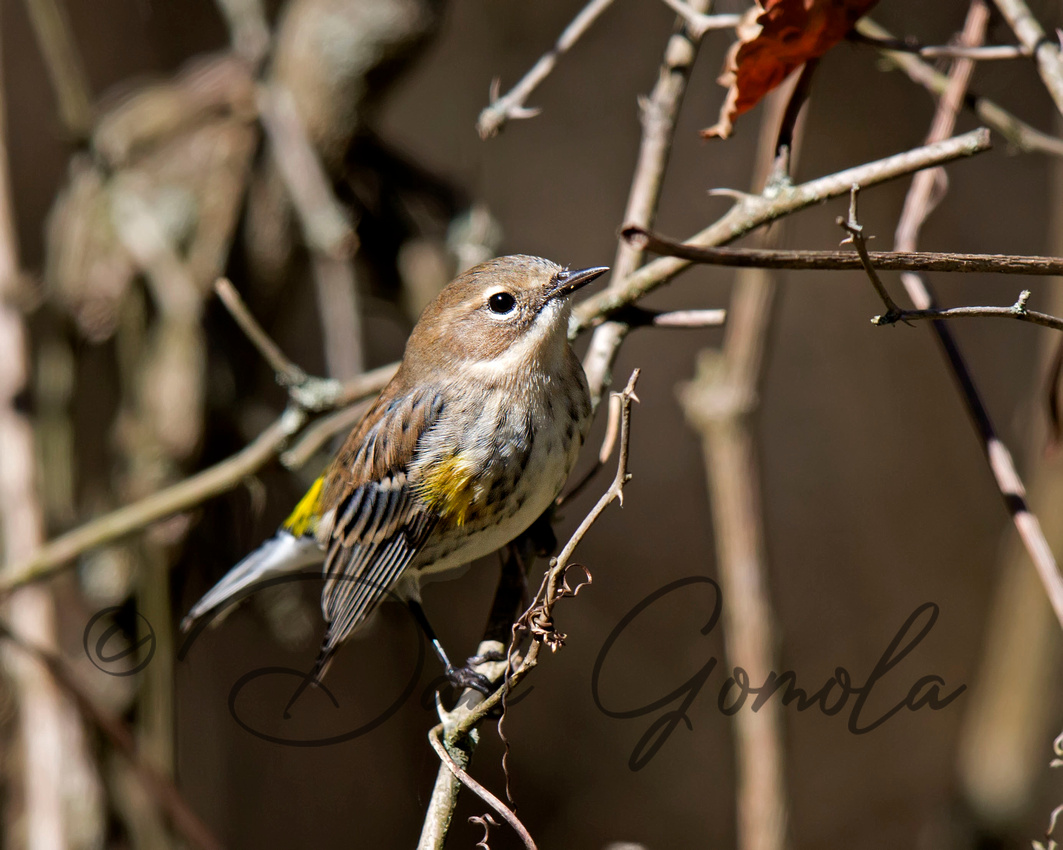 The Dark-eyed Junco breeds in the far north of Canada.  They must like the cold weather as their wintering ground is most of the United States.  I know winter is coming when I begin to see them flocking in our trees and feeding stations. 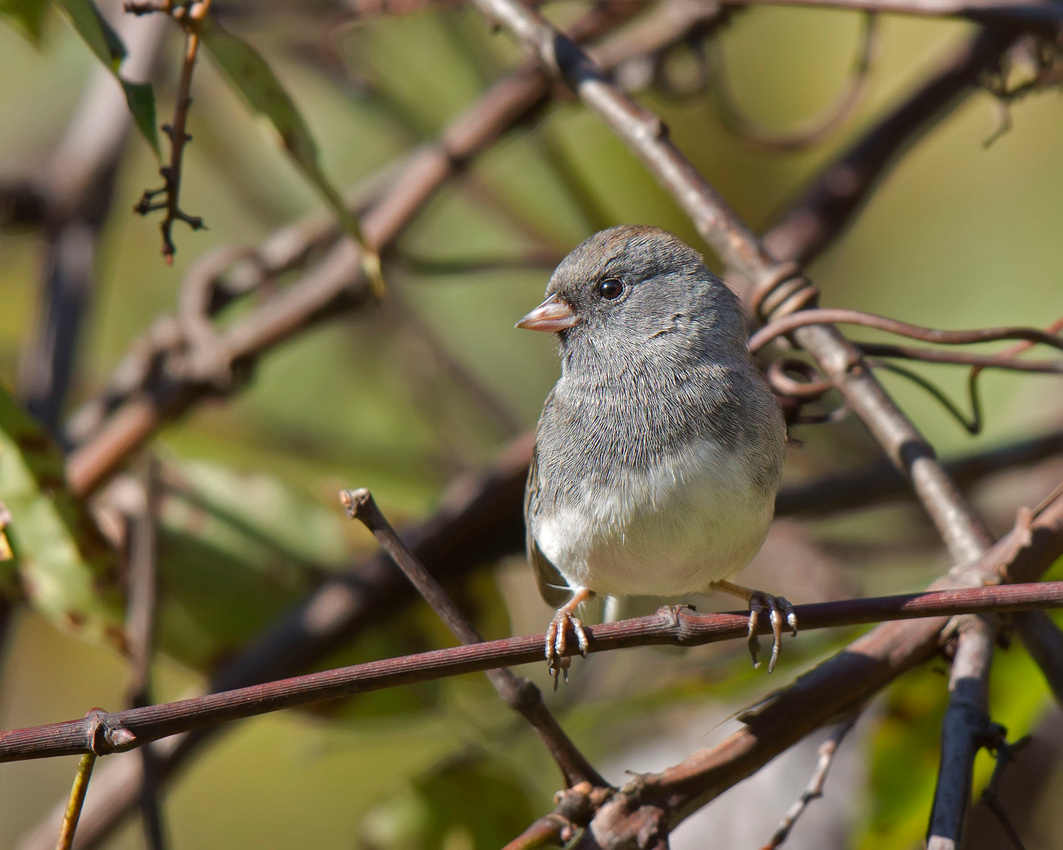 Fox Squirrel's, the larger cousin of the Gray Squirrel, are busy gathering acorns to cache for winter. 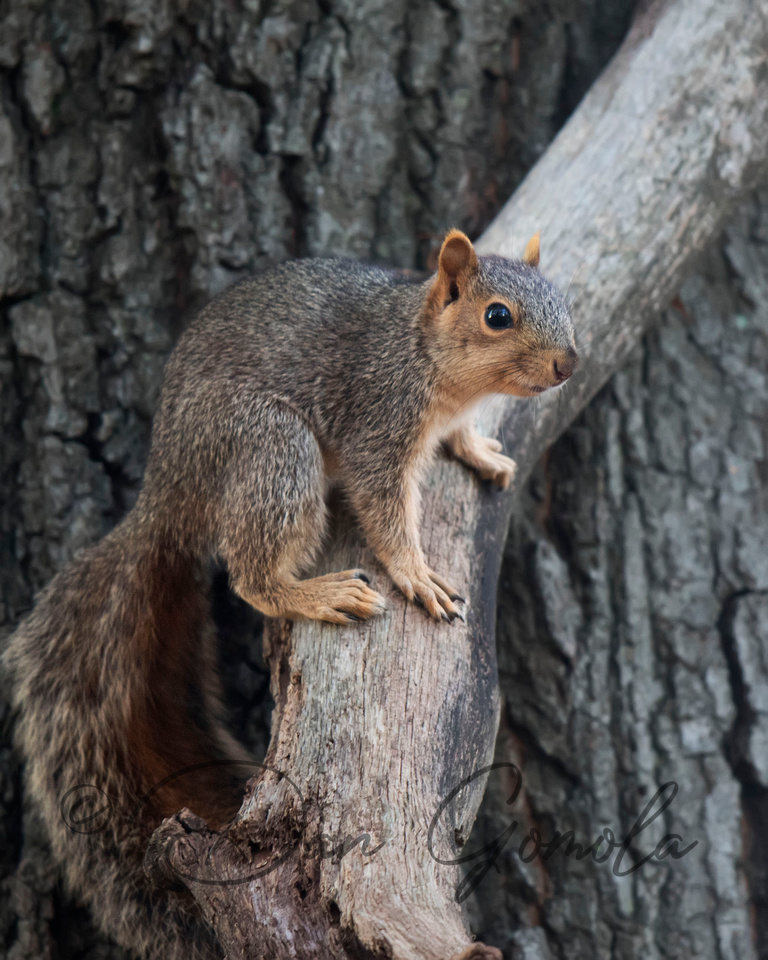 The Ruby-crowned Kinglet is a fantastic little bird that is difficult to photograph.  They don't sit still very long while jumping from branch to branch looking for insects.  When on alert or excited, they will display a red patch on their crown. 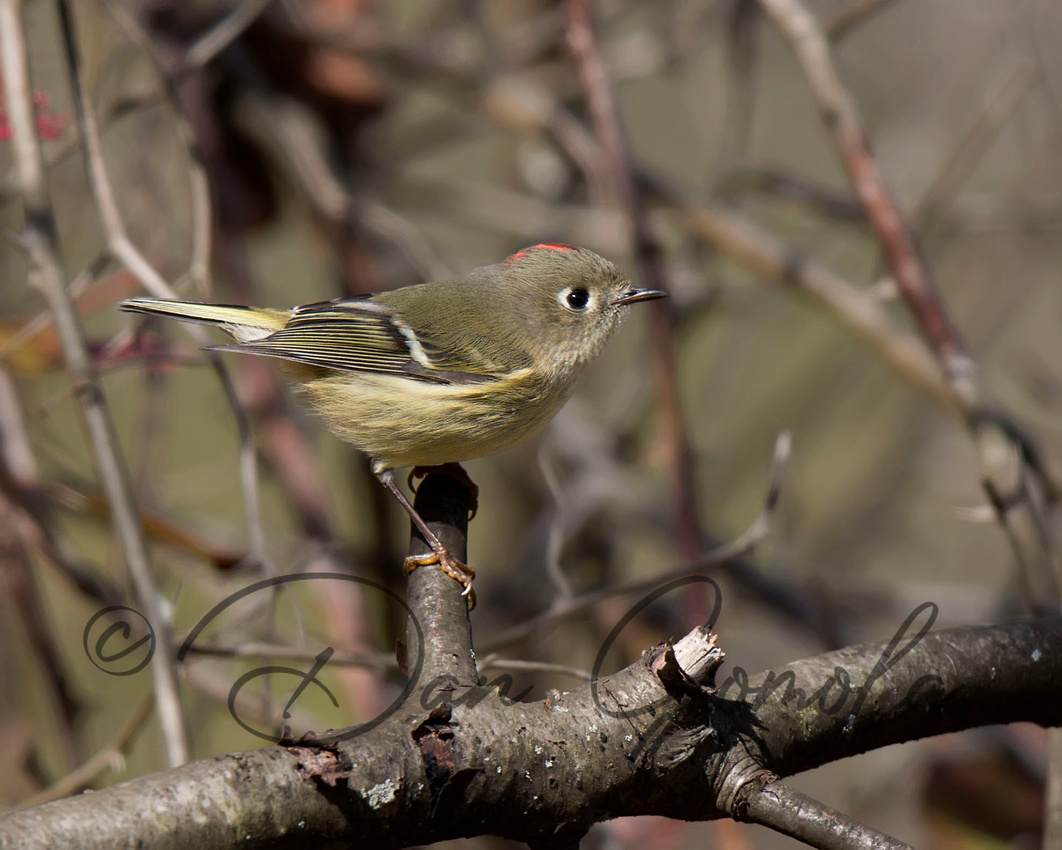 I found this Carolina Wren, along with two others, on a cool, dark, autumn morning gathering some meaty morsels from under the leaves. 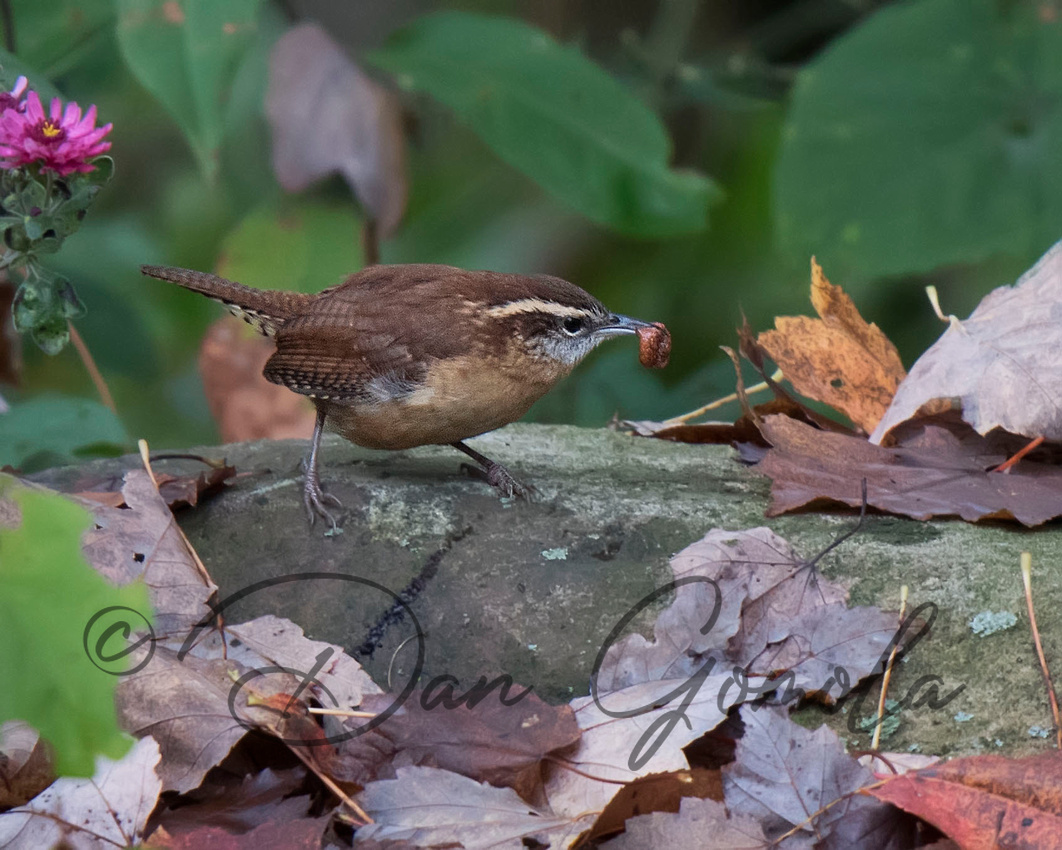 This Black-throated Green Warbler found his protein among the purple-blue fruit of the wild grape vine. 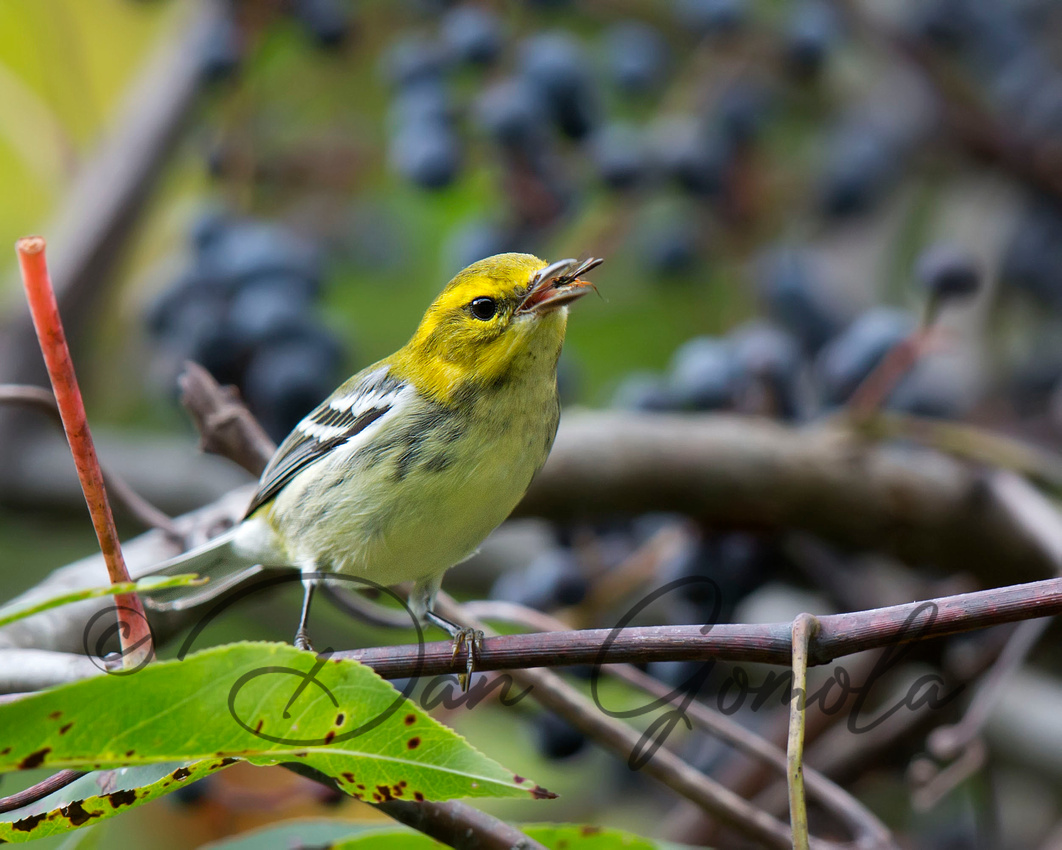 One Sunday morning my wife, Elena, and I headed north towards Pymatuning State Park.  On our way, we decided to stop at Lake Wilhelm at Maurice K. Goddard State Park to see if the Bald Eagles are perched in what seems to be their favorite tree.  Both adults were sitting high in the tree with the wind at their backs. 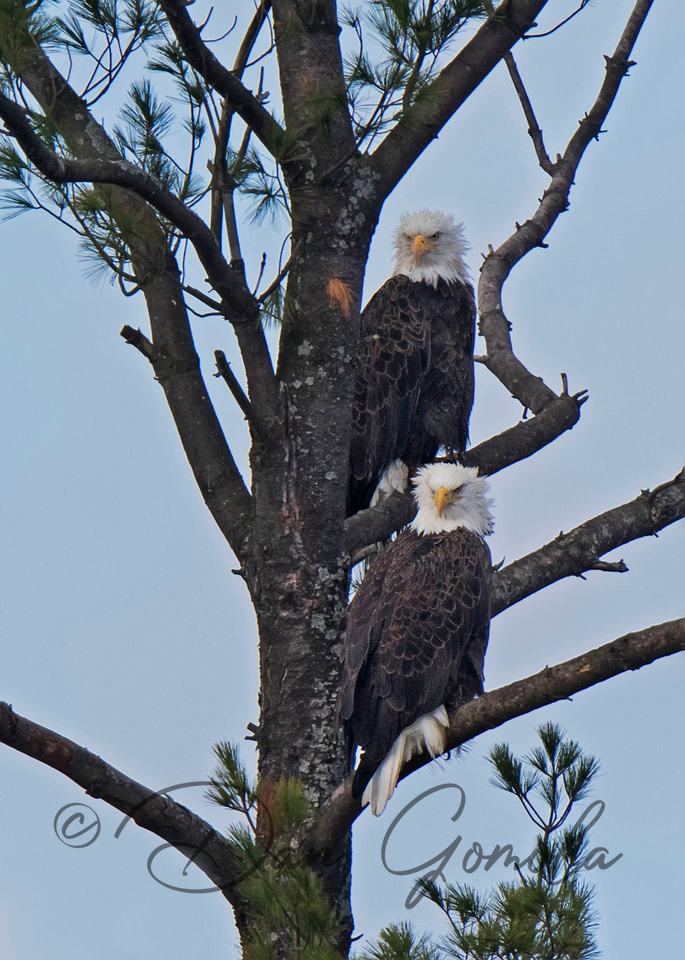 Later that day, at Pymatuning State Park,  we saw several Bald Eagles flying around.  Once in a while, one would circle close enough for a decent photo. 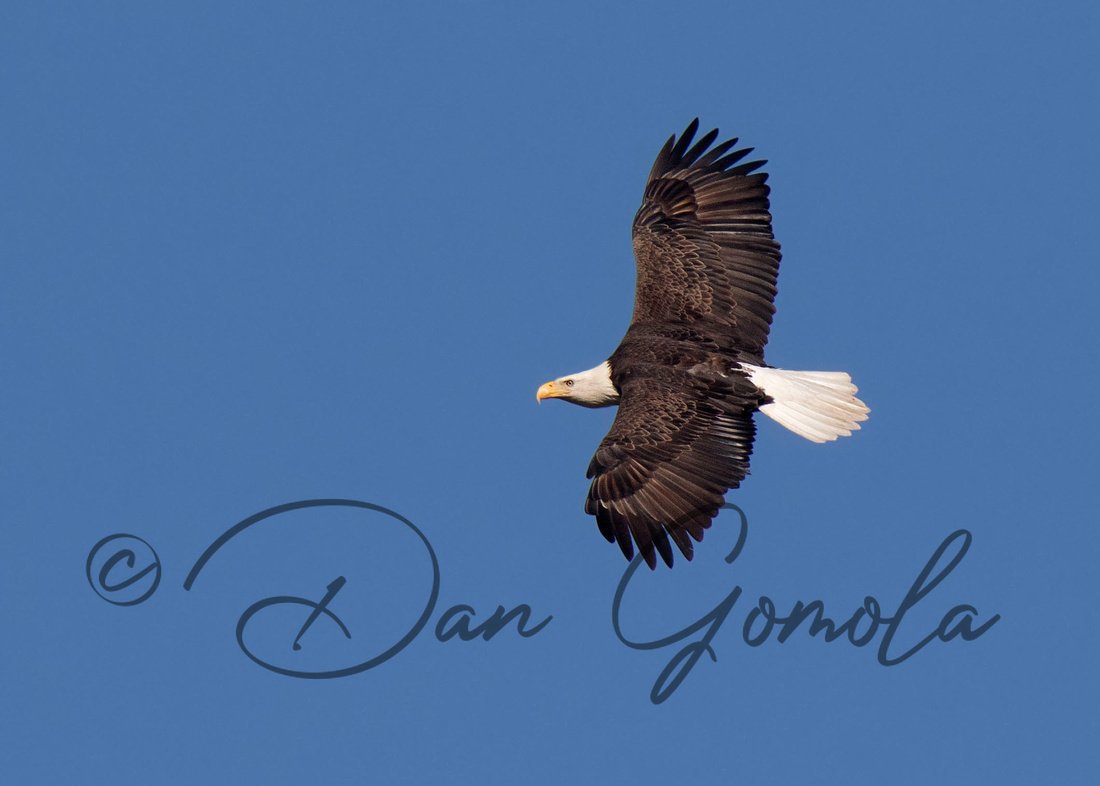 We visited the spillway area where the ducks walk on water.  Actually, they walk on Carp.  The fish are waiting anxiously to be fed bread by the 50 or so people visiting the spillway that day. 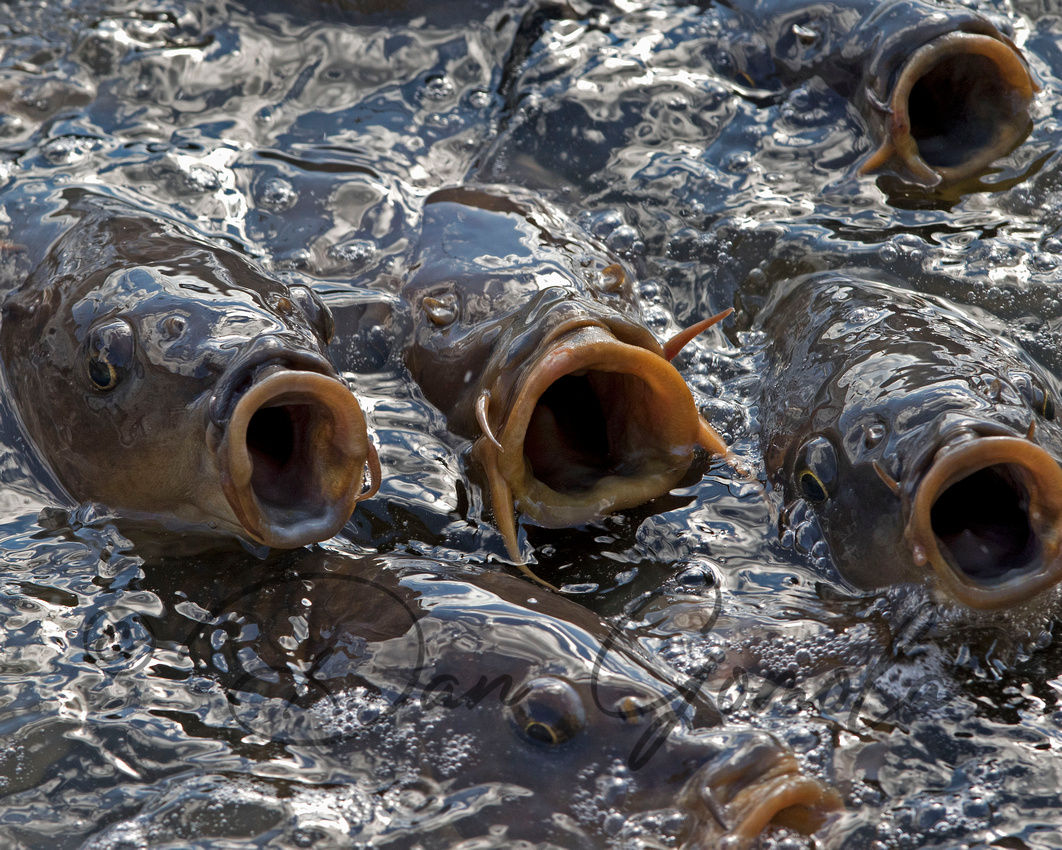 Of course, when people are throwing bread, you will find gulls.  In this case, they were Ring-billed Gulls.  Even though they are common, I still like to photograph them flying around. 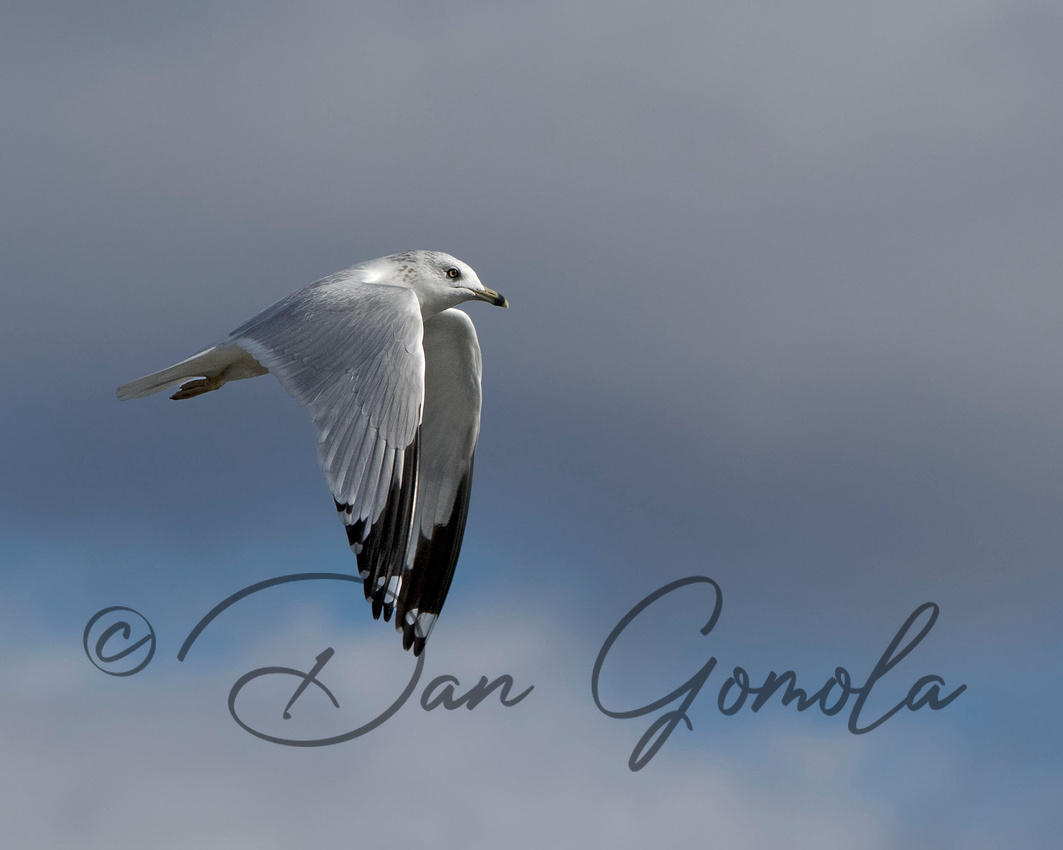 Here is another Ring-billed Gull waiting for a piece of food to be thrown into the air. 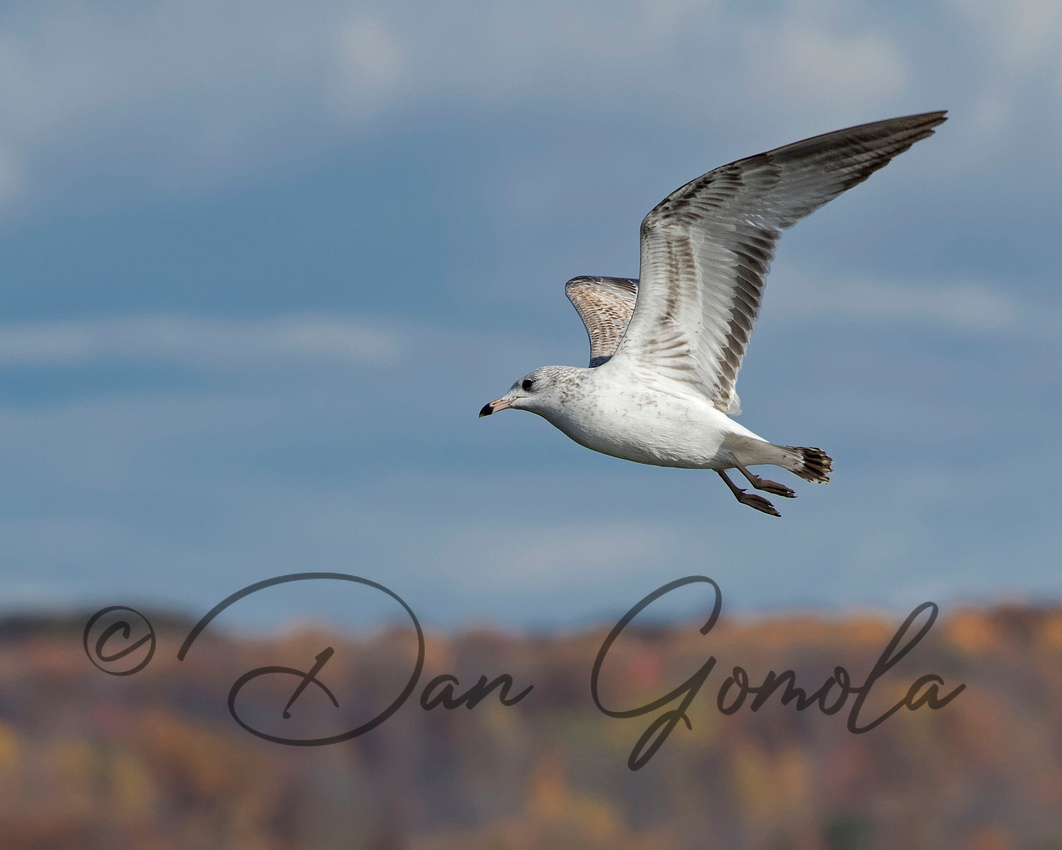 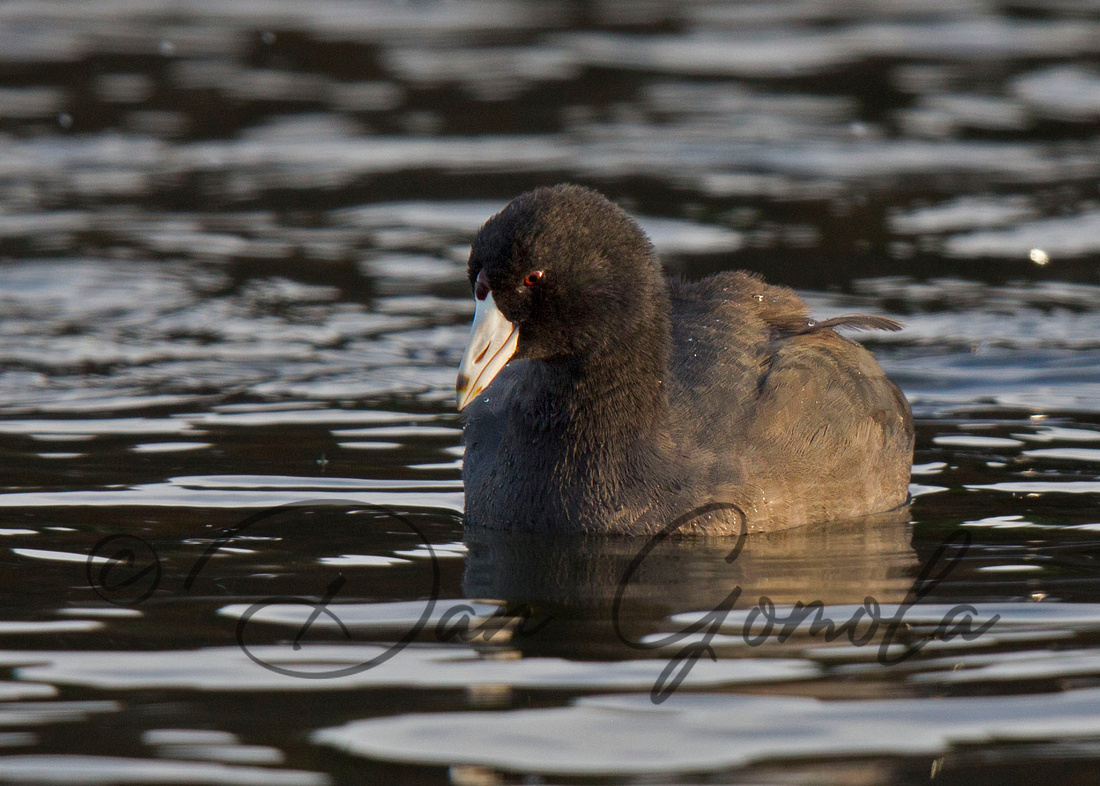 I can honestly tell you that all the experiences I included in this photo blog was relaxing, exciting, and peaceful at the same time.  I hope, no matter where you live, you too can get out, escape the gravity of life, and appreciate the wildlife around you.  I sure will.

Check back soon as I get back to sharing some White-tailed Deer rut photographs.