Autumn has returned and you can't miss it.  The days are getting shorter, the weather is turning cooler, and the leaves on the trees are turning bright hues of red, orange, and yellow.  One of the nice things about living in Pennsylvania is we don't have to travel very far for fantastic leaf viewing.    No matter where you live in this state you are within a few hours of flat lands, rolling hills, or the steep mountains of the Allegheny and other state forests.  Each one offers its own visual pleasure.

This photo blog contains a mix of photos from landscape to wildlife.  I enjoyed the time I spent traveling with my wife, Elena, and want to share our experiences with you.  It is photo heavy so sit back, relax, and enjoy autumn in Pennsylvania.  If you make it to the end, you'll be treated with a minute of soothing waterfall video from Hell's Hollow in McConnells Mill State Park.

The Eastern Chipmunk are scurrying around collecting large amounts of acorns and nuts to store in their winter cache.  Their burrow can be 10 feet long with several cavities to build their cache.  Also in the burrow is a room lined with leaves to serve as its nest.  Chipmunks hibernate during the winter but do wake every couple weeks to eat from their cache. 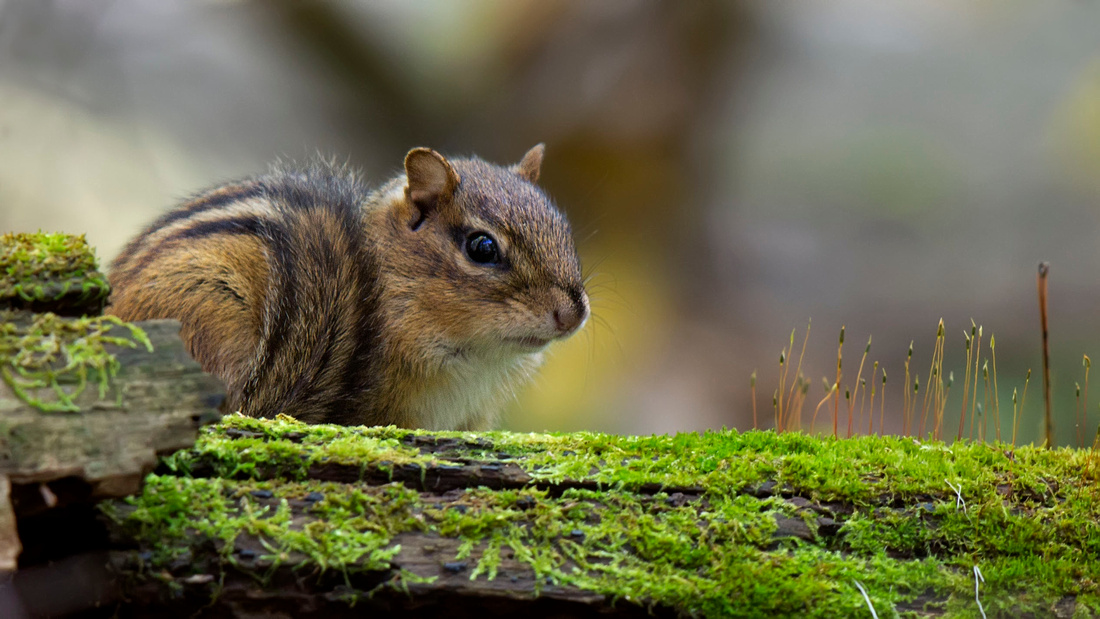 Elk County, Pennsylvania is one of our favorite places to go but is more special in the fall.  Besides the elk rut, the autumn colors that cover the landscape are breathtaking.  Below is a scene from along the Bennett Branch of Sinnemahoning Creek in Medix Run, PA. 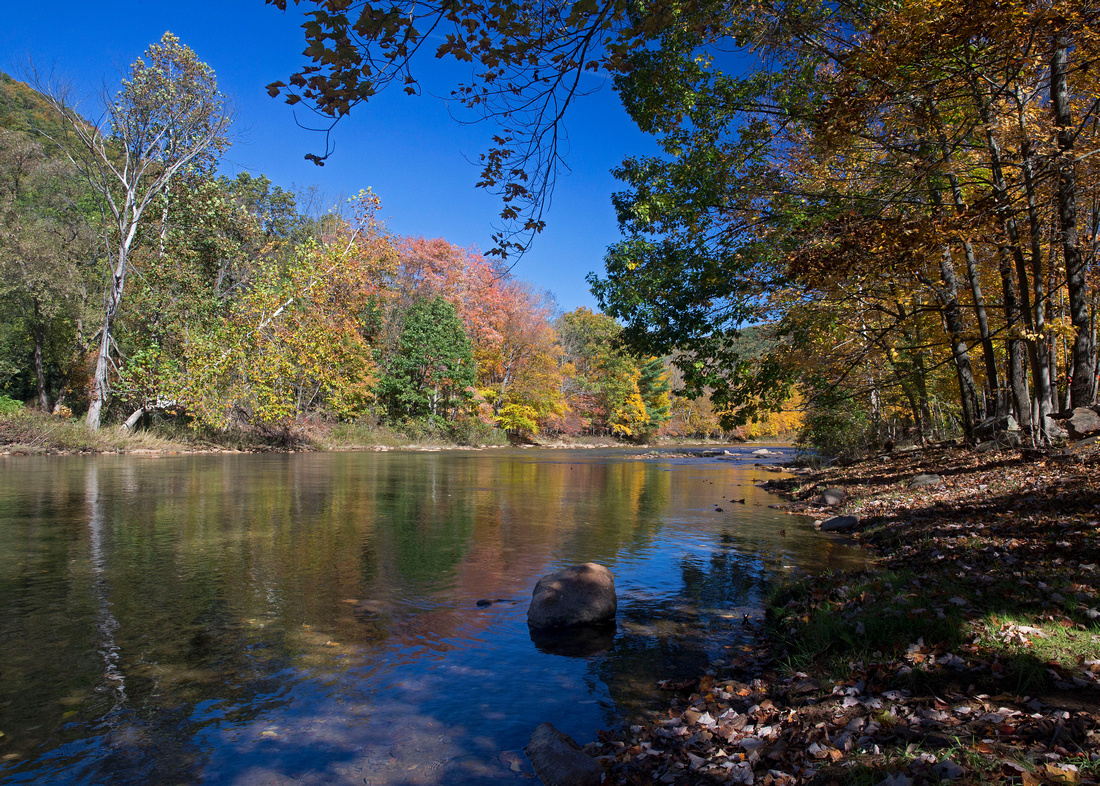 Some warblers can still be seen in the area but, as temperatures turn cooler, they will hop the currents and continue their journey south.  Here is a look at a pretty female Common Yellowthroat.  She could be the last one I see in 2015. 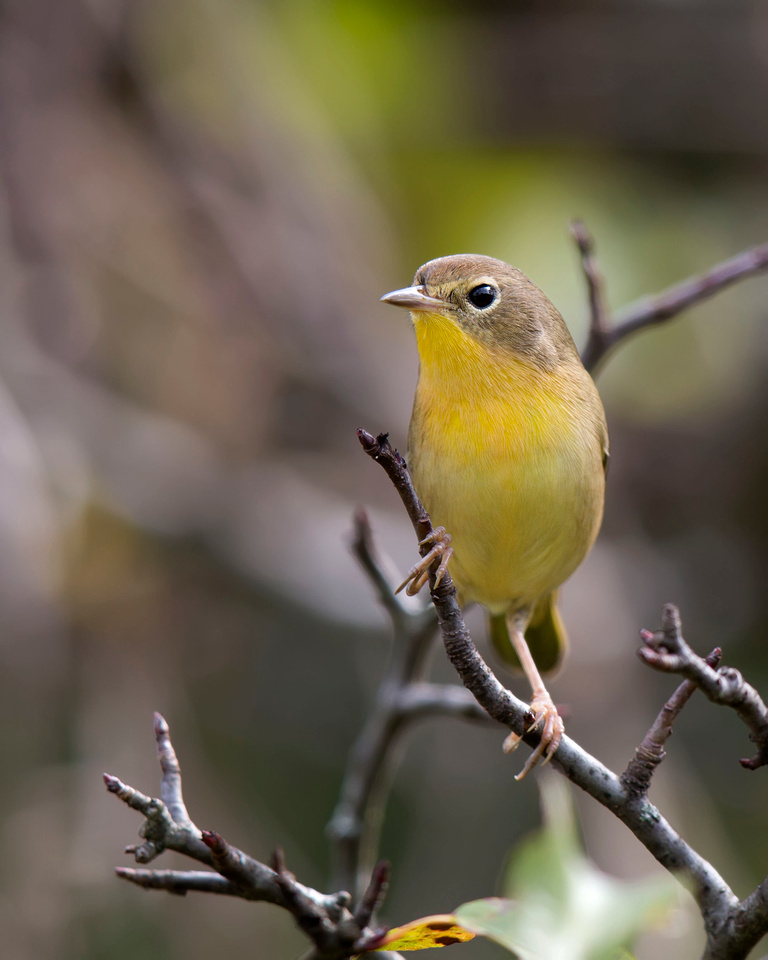 The Moshannon State Forest covers a whopping 190,031 acres on the Allegheny Plateau.  Contained within her boarders, is the 917 acre Marion Brooks Natural Area, known for its large stand of White Birch trees.  We were there after autumn color peaked but the scenery was still beautiful. 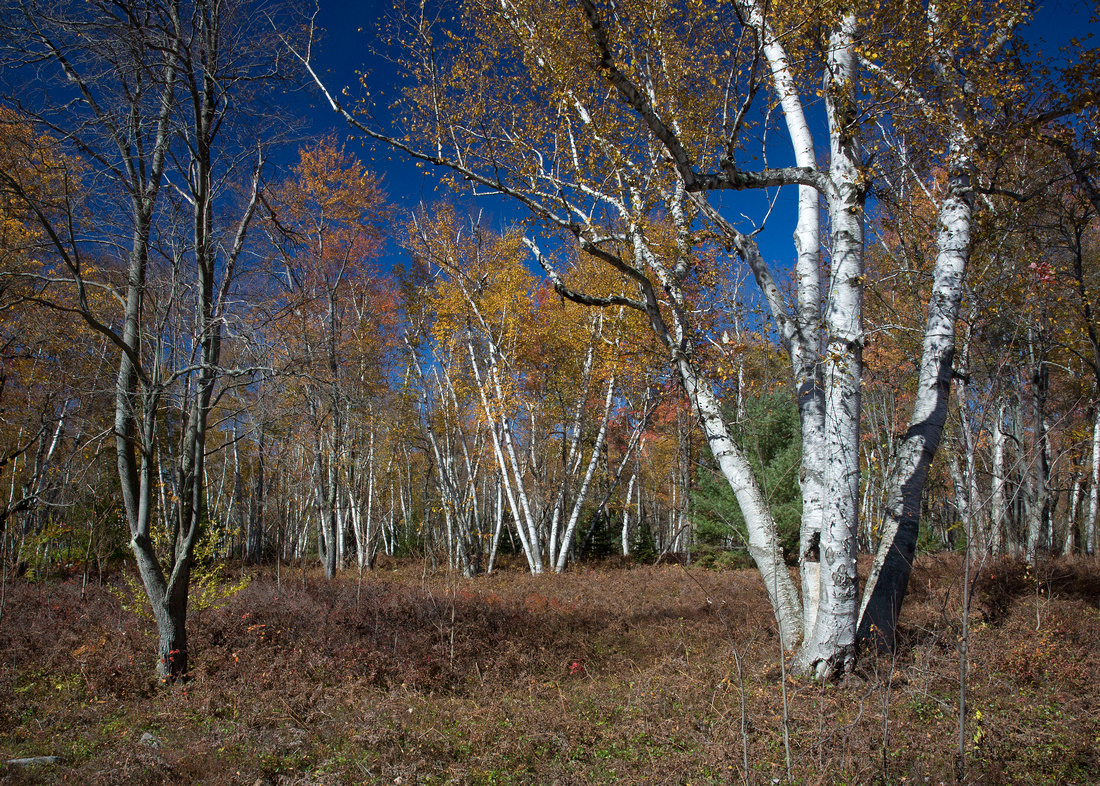 It is unusual to photograph a White-breasted Nuthatch in an upright, perched position.  Usually, they are upside down on the side of a tree.  The pose is what makes this photograph unique. 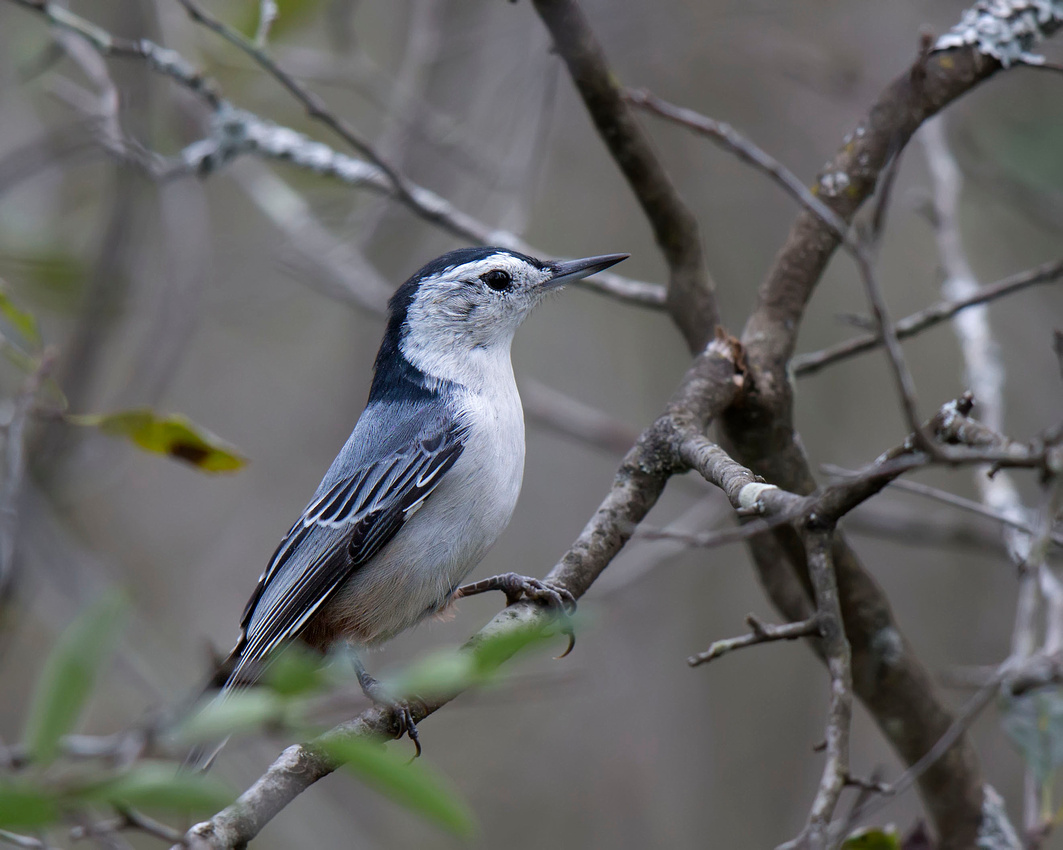 The Philadelphia Vireo, a songbird of the woodlands, breeds in Canada and winters in Central America.  I happened to photograph this one during migration. 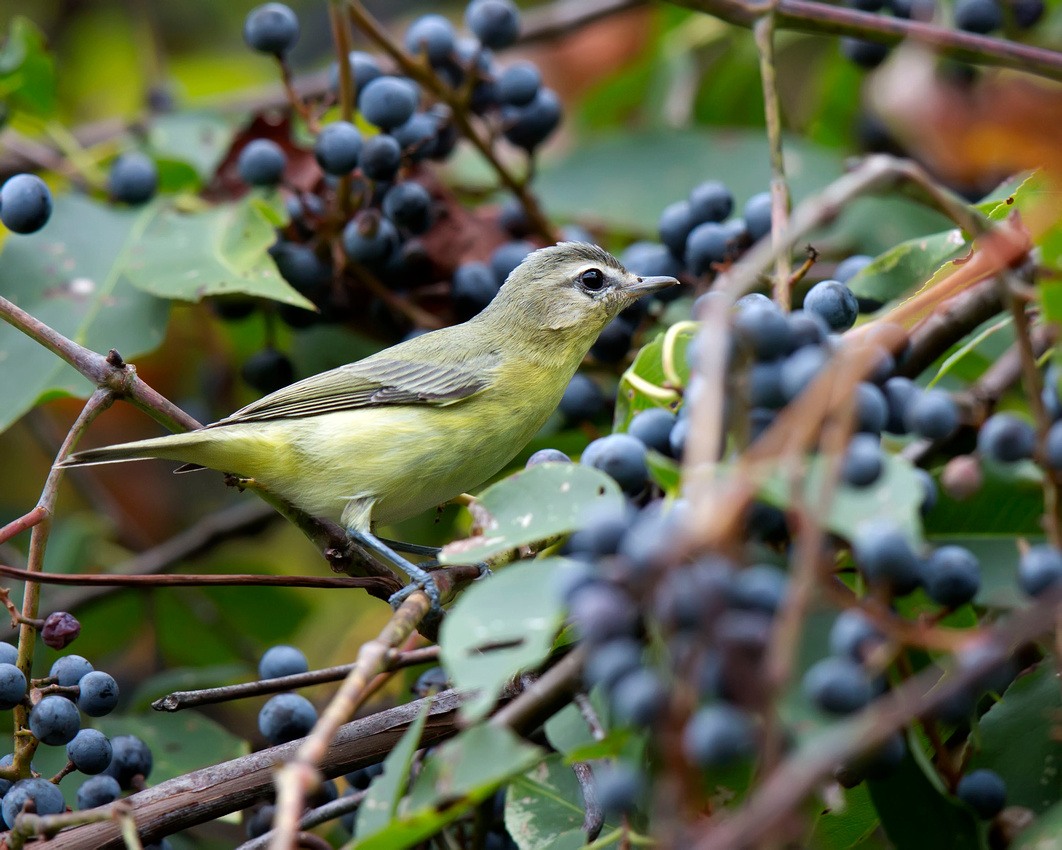 Below is another scene from our drive into the Moshannon State Forest. 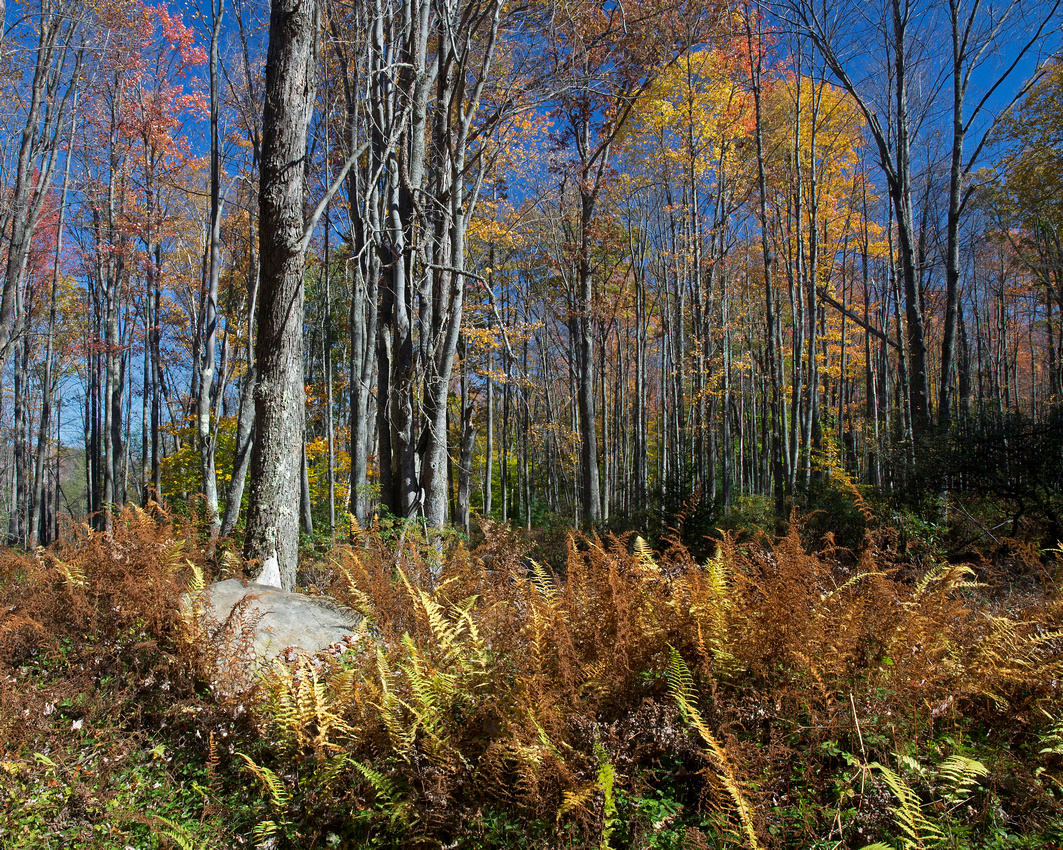 Once again, while in Benezette, we headed East on Route 555 to the Bucktail Overlook near Driftwood.  We never get tired of this scenery. 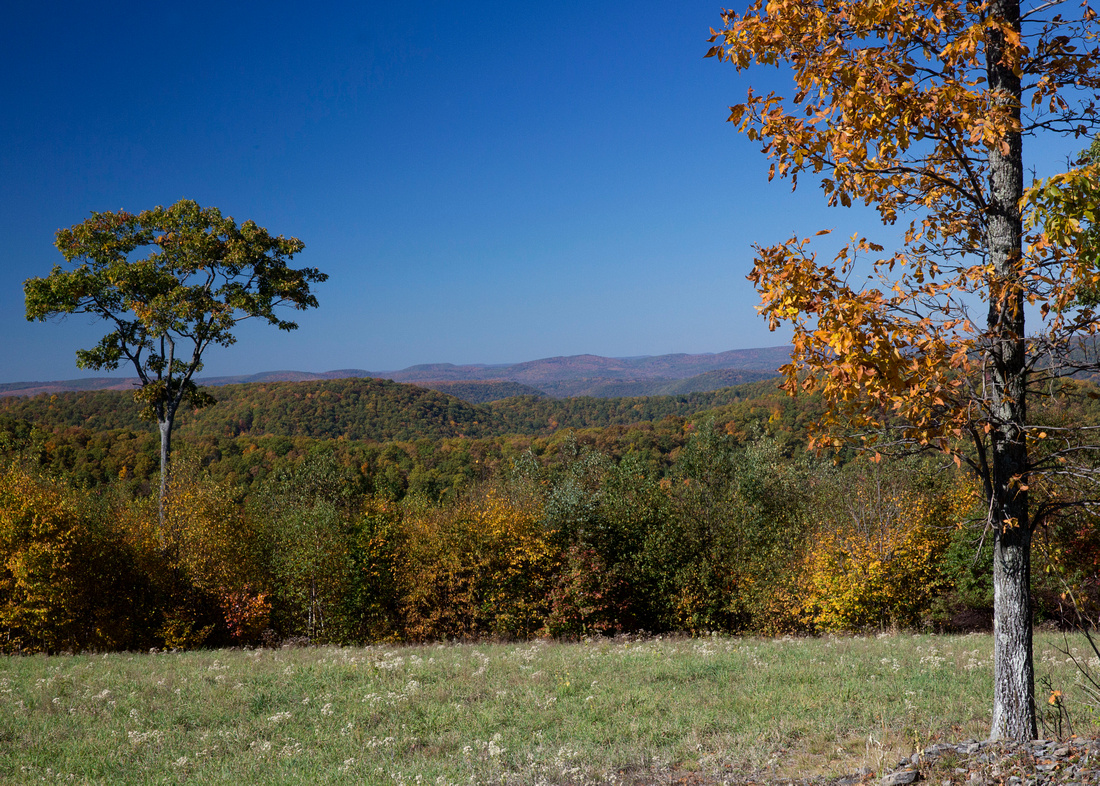 Any direction you look from the Bucktail Overlook, offers something different.  This Northwest vista gave us a sea of yellow. 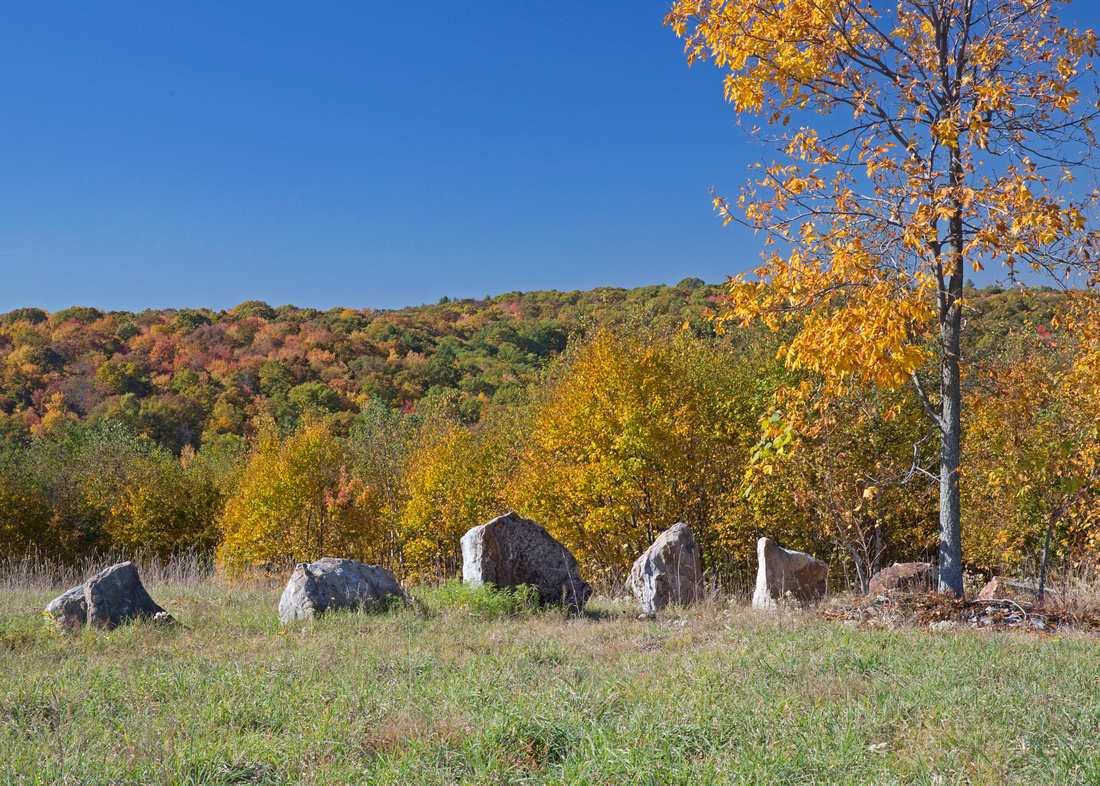 The Hooded Warbler is one of the warblers whose plumage doesn't change very much from spring to fall.  Even this late in the year, this male's black hood and yellow face stand out. 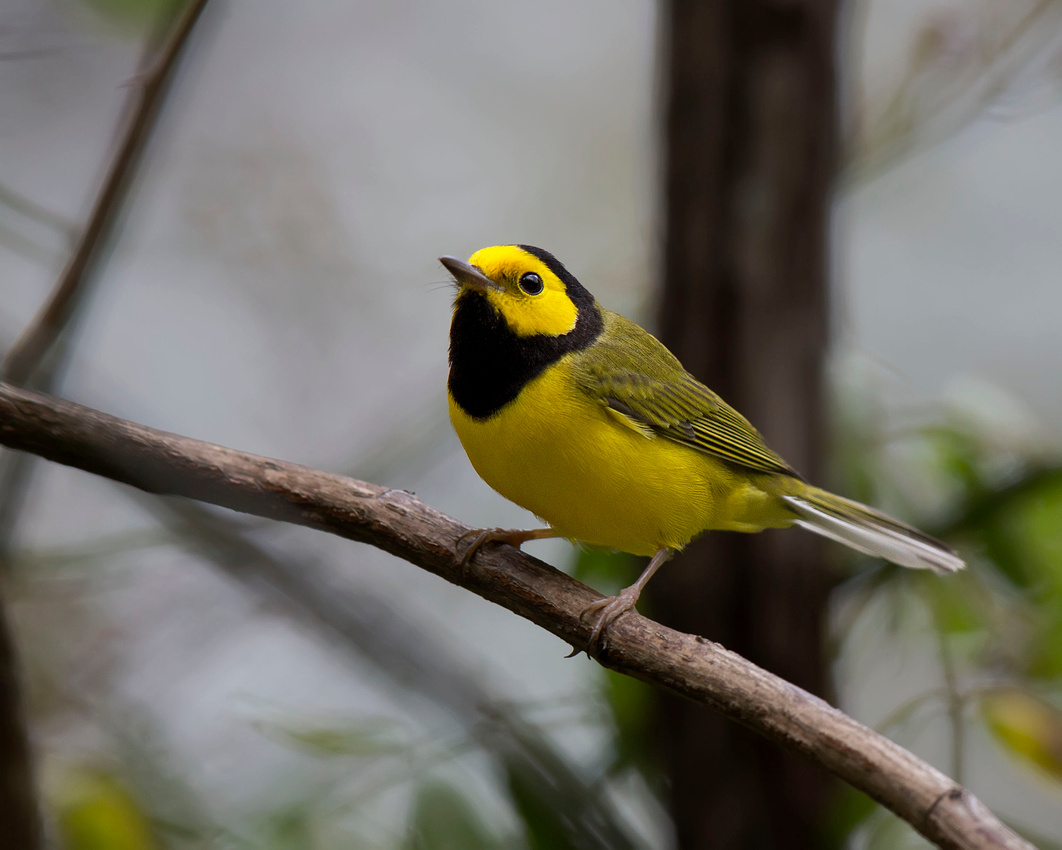 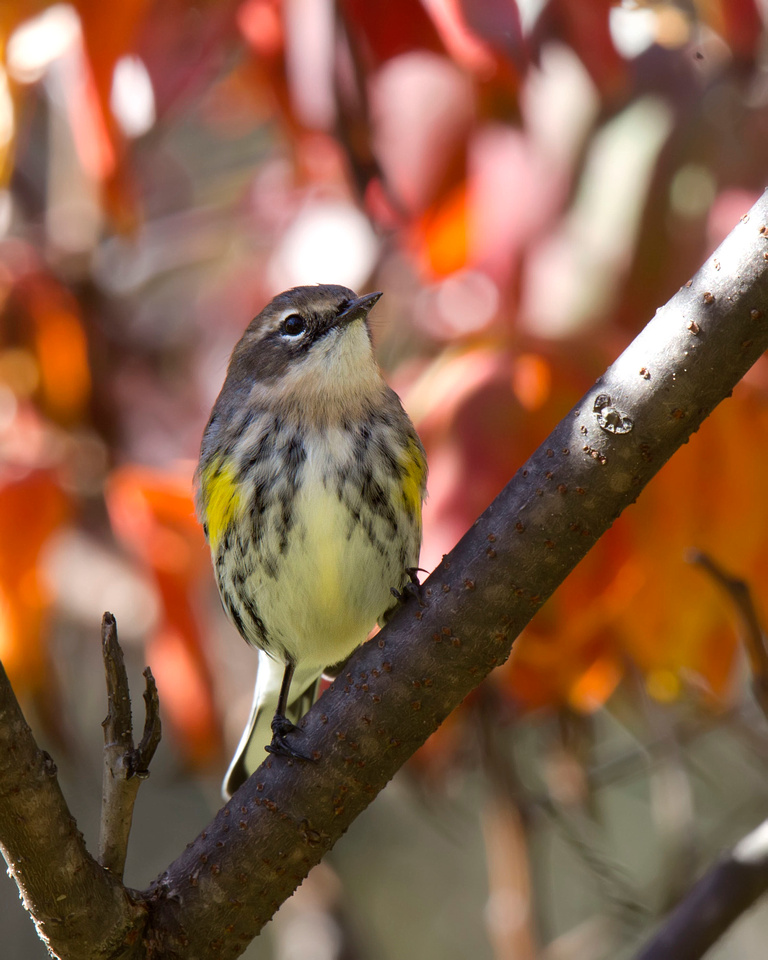 In a scene very different from my blog "A Day Of Photography In Elk Country", this field no longer hosts the excitement and tension of a bugling elk guarding his harem.  In this autumn scene, it takes on a peacefulness that causes a calmness to take over your mind and body. 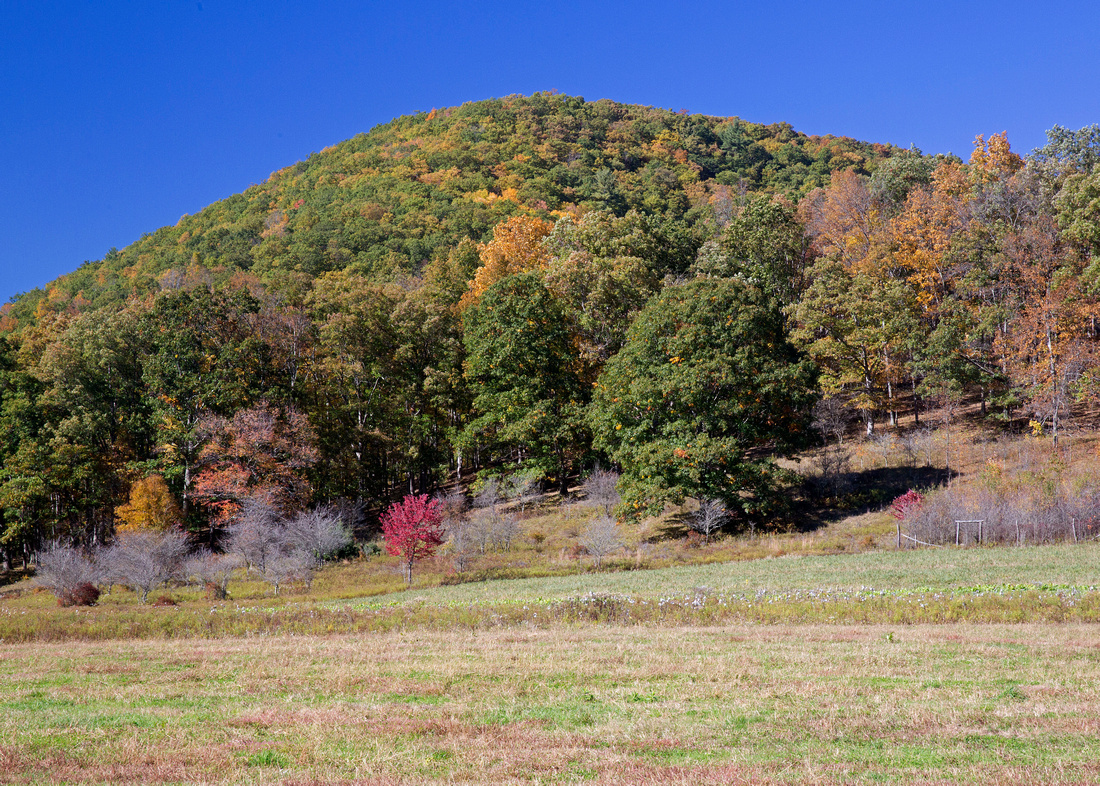 By mid October, the American Elk rut is over but if you go to Benezette, you can still hear some bulls bugling and see an occasional sparring match with no intent to show dominance. After dinner at the Benezett Store Restaurant, we visited the fields behind the Elk Country Visitor's Center on Winslow Hill.  The Visitor's Center's fields have been a hot spot during the rut this year and continues to attract a large number of cows, calves and a few bulls. 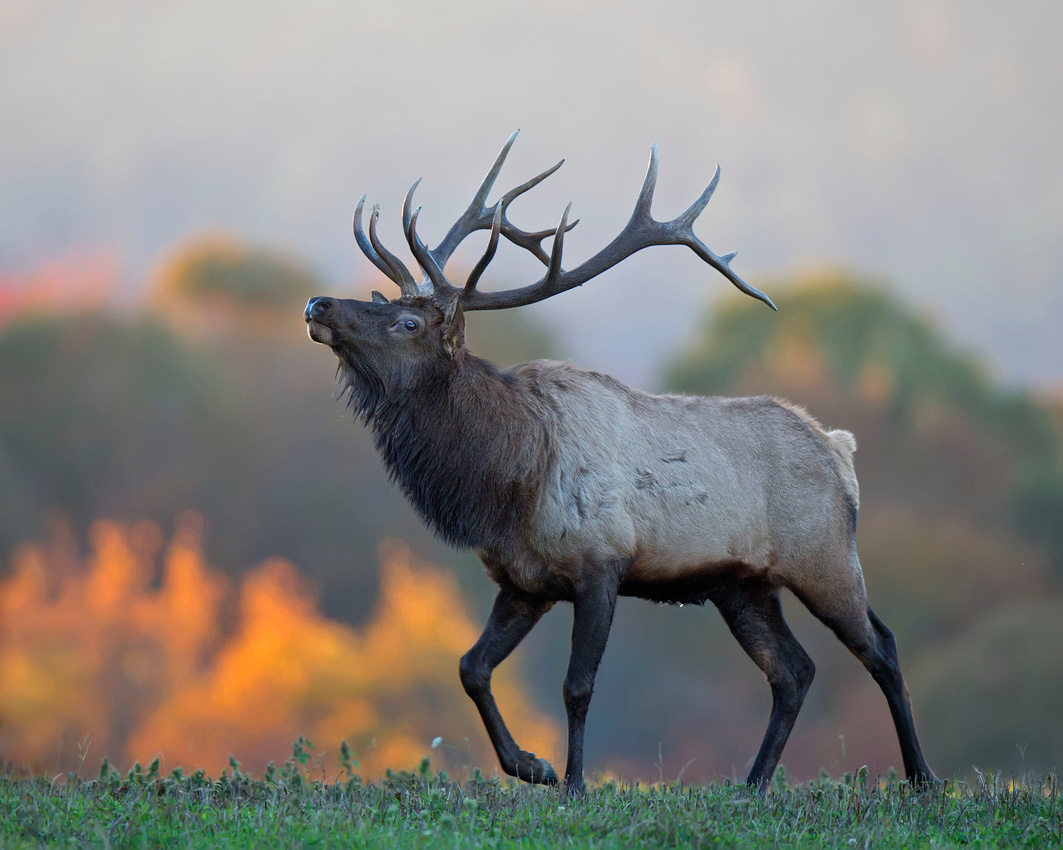 Some elk cow go into a second estrus cycle so breeding can still take place well into October.  Most bulls, including the one we found on Winslow Hill, continue to chase hot cows. 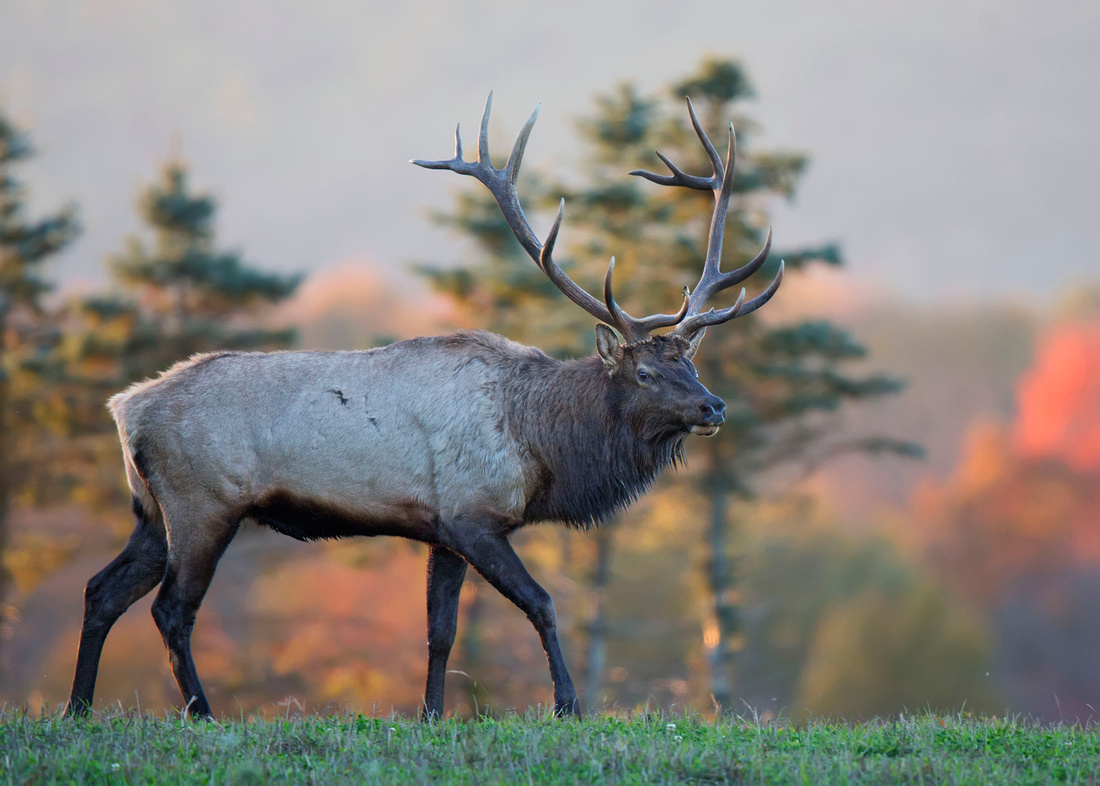 As I said earlier, even though the fierce fighting is over, you can still hear an occasional bugle echoing through the hills.  The red-orange glow of the setting sun highlights this elk's rack and mane. 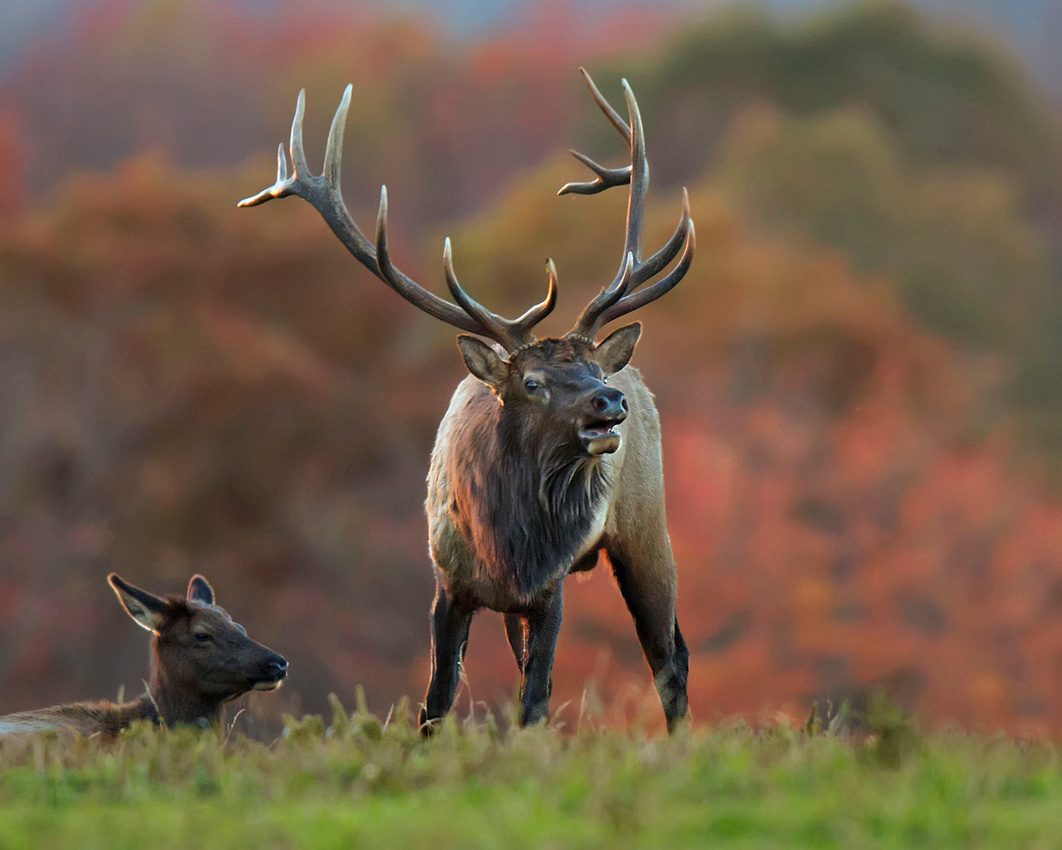 Elk country sunsets, which can be viewed from many locations, are a perfect way to end a day.  See the beauty of a bull, and two of his grazing cows, basking in the final minutes of the day's sun. 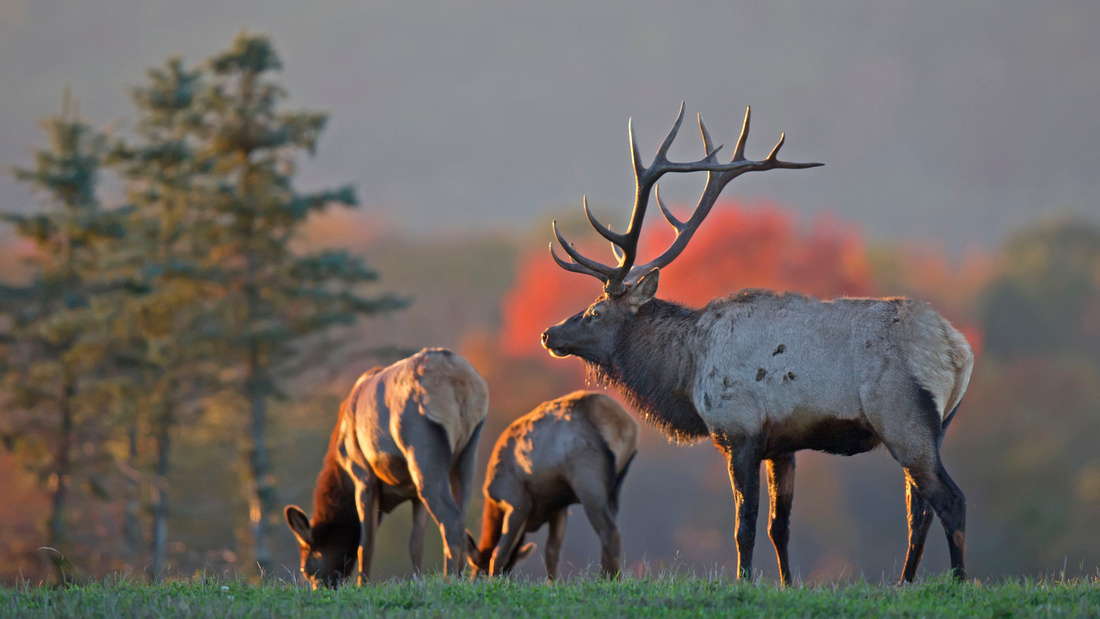 Back home, in Butler County, PA, our colors peaked a week later than in the mountains of Elk County, PA.  Lake Arthur, in Moraine State Park, is where I spend a lot of time photographing wildlife, especially birds.  On this day, I was looking for leaf color.  This picnic area is positioned slightly above the lake providing golden views. 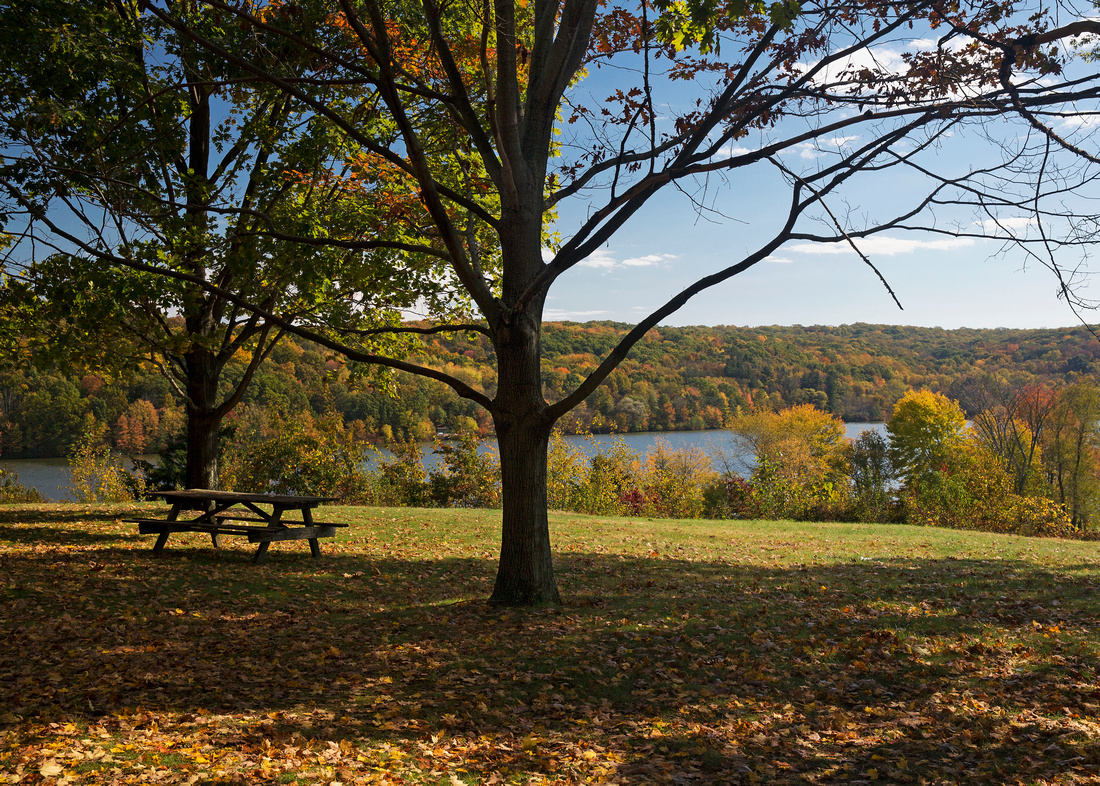 The sweet song of the Eastern Towhee is seldom heard this time of year.  The female, seen in the photo below, is perched on the branches of a crabapple tree. 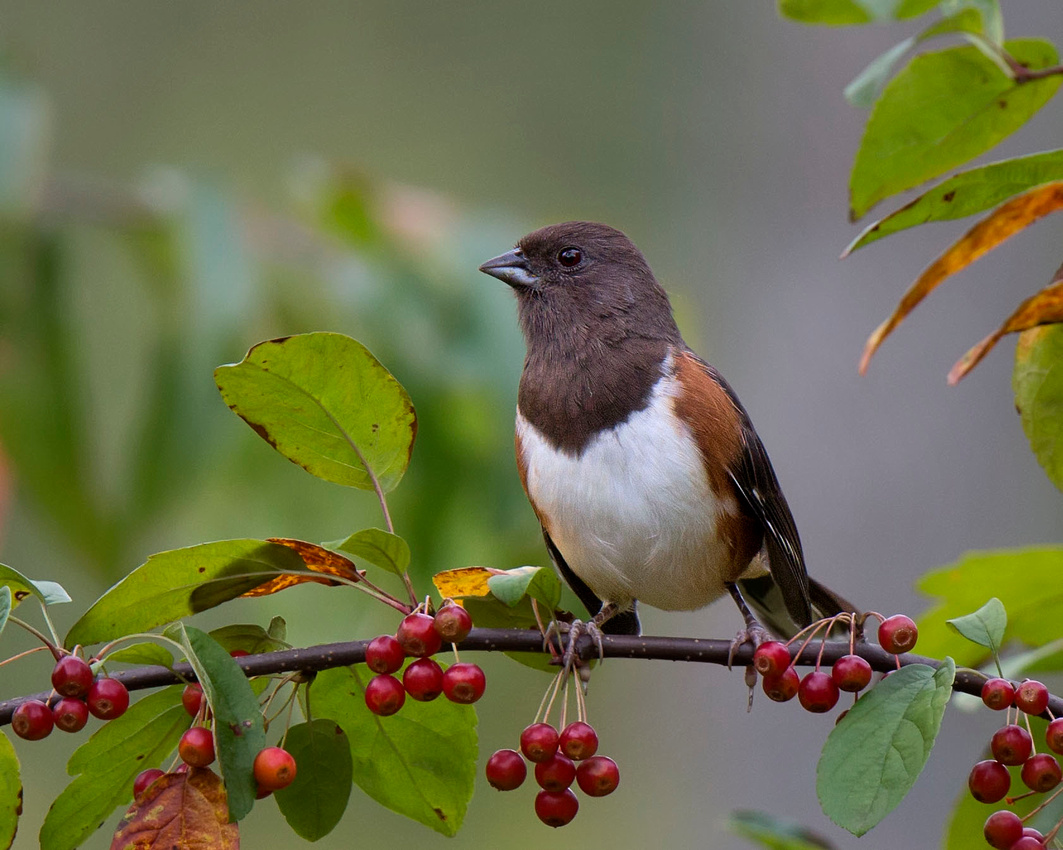 Another warbler on its way south.  The Black-throated Green Warbler may spend the summer and breed in Pennsylvania but the winter is too cold.  Central America is their preferred winter ground. 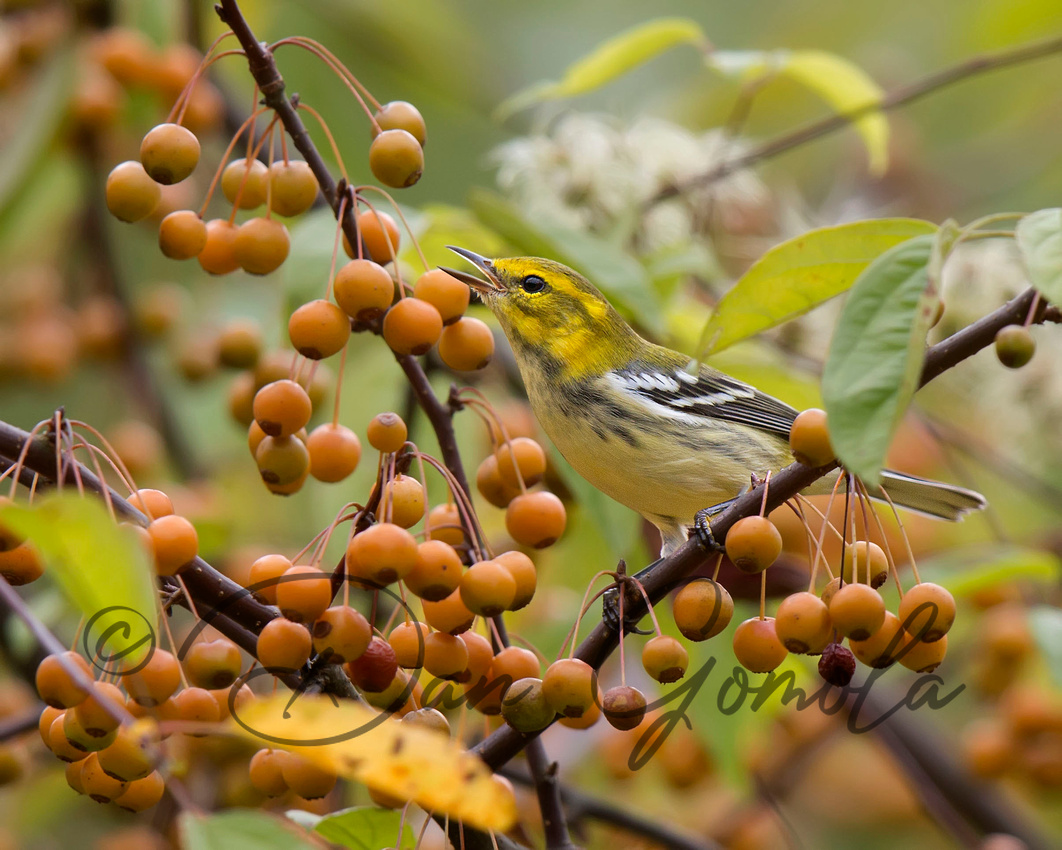 Lake Arthur is a 3,225 acre lake nestled in the rolling hills of western Pennsylvania. 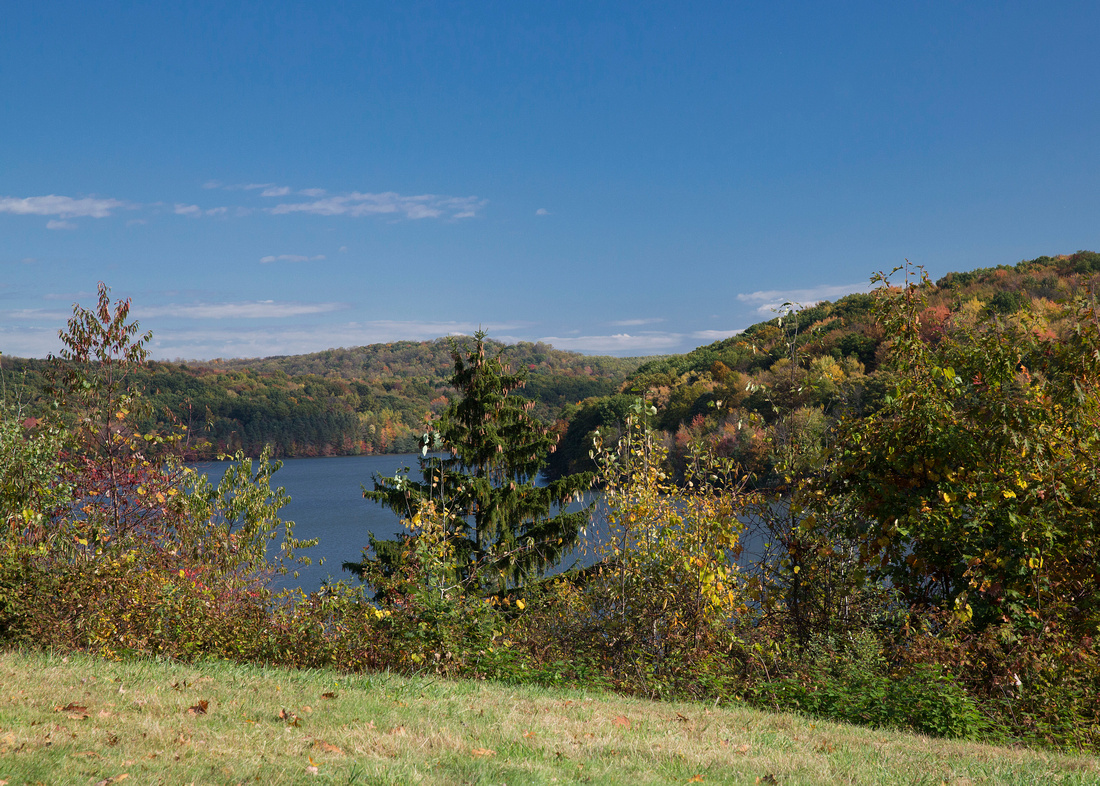 McConnells Mill State Park, a national natural landmark, encompasses 2,546 acres of Slippery Rock Creek Gorge.  The gorge was created thousands of years ago by the draining of glacial lakes.  It has steep sides and the flood waters left behind giant boulders throughout the park.  A grist mill, built in the 1800's, still stands today.  Below is the dammed up area of Slippery Rock Creek that made the grist mill operational.  The grist mill is out of the photo to the right. 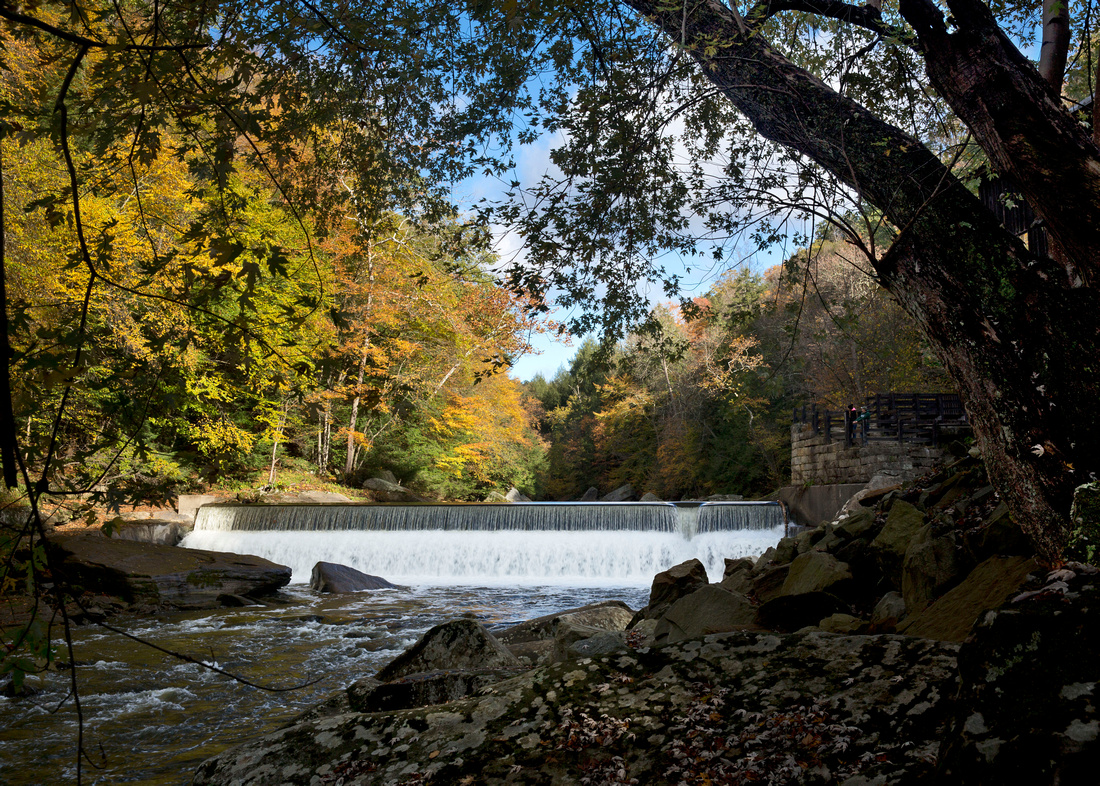 Above the gorge and outside of the park, sits this cabin.  Perhaps I should have brushed up on my history a little better before writing this blog because I don't know anything about this cabin.  I liked the way it looked surrounded by the autumn colors. 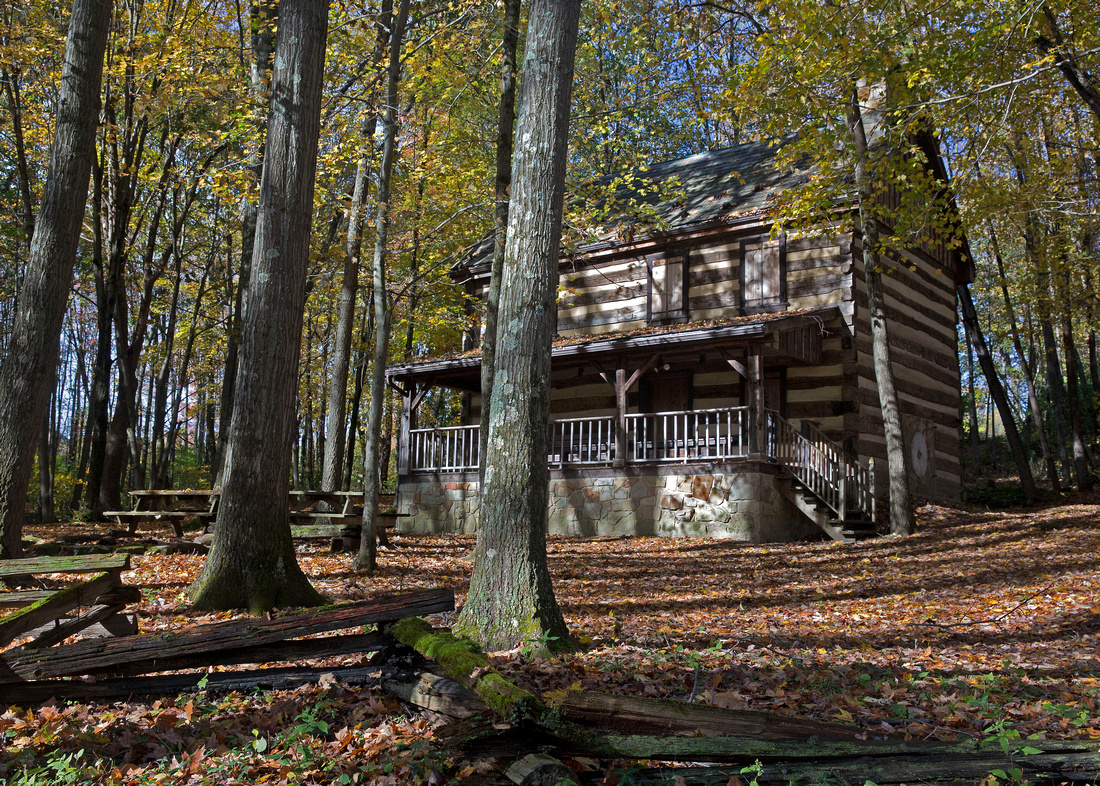 Our next stop in McConnells Mill State Park was Hells Hollow.  After starting down the trail, we were faced with a decision.  Well, it wasn't that hard of a decision because we went to Hells Hollow solely to visit the waterfall.  It's just a coincidence that it was the shortest and easiest hike.  I would like to point out that these hiking trails aren't for the faint of heart.  They can be very rocky and steep.  Just sayin'! 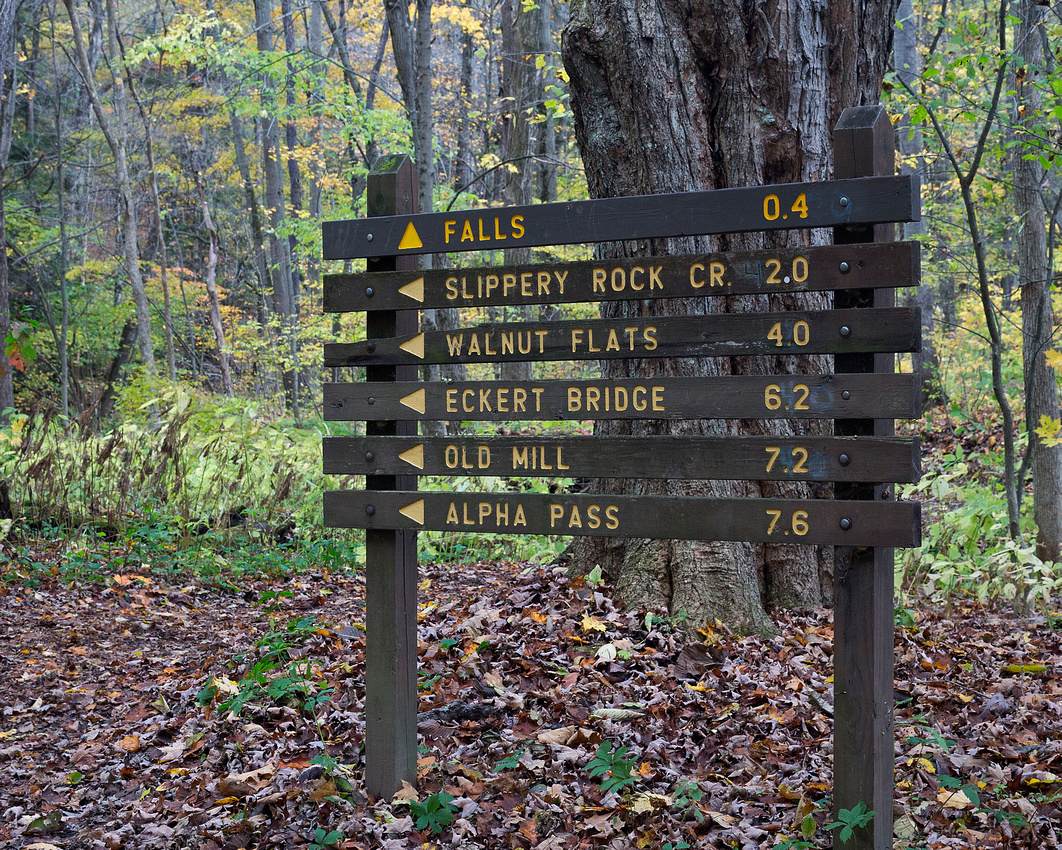 Here is a shallow creek bed, engulfed in golden, fall colors, leading to the falls. 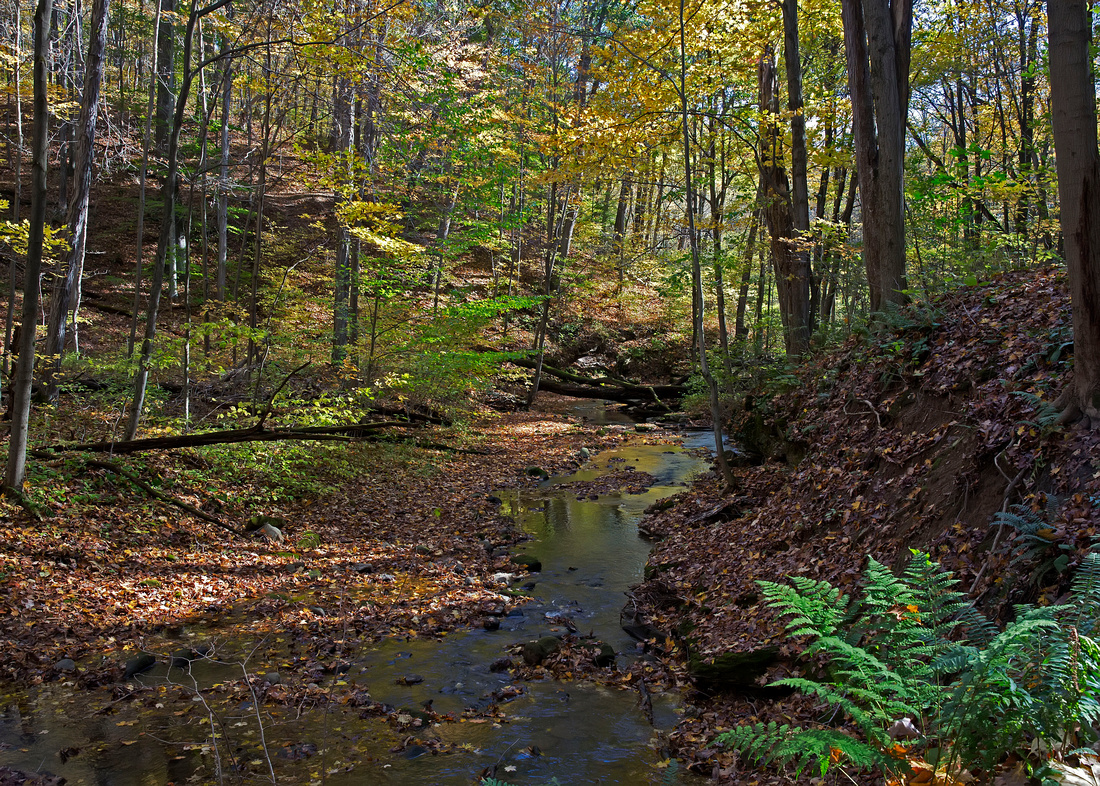 You can see in the next photo how thousands of years of flowing water can erode sandstone right down to the harder layers of rock that doesn't erode as easily. 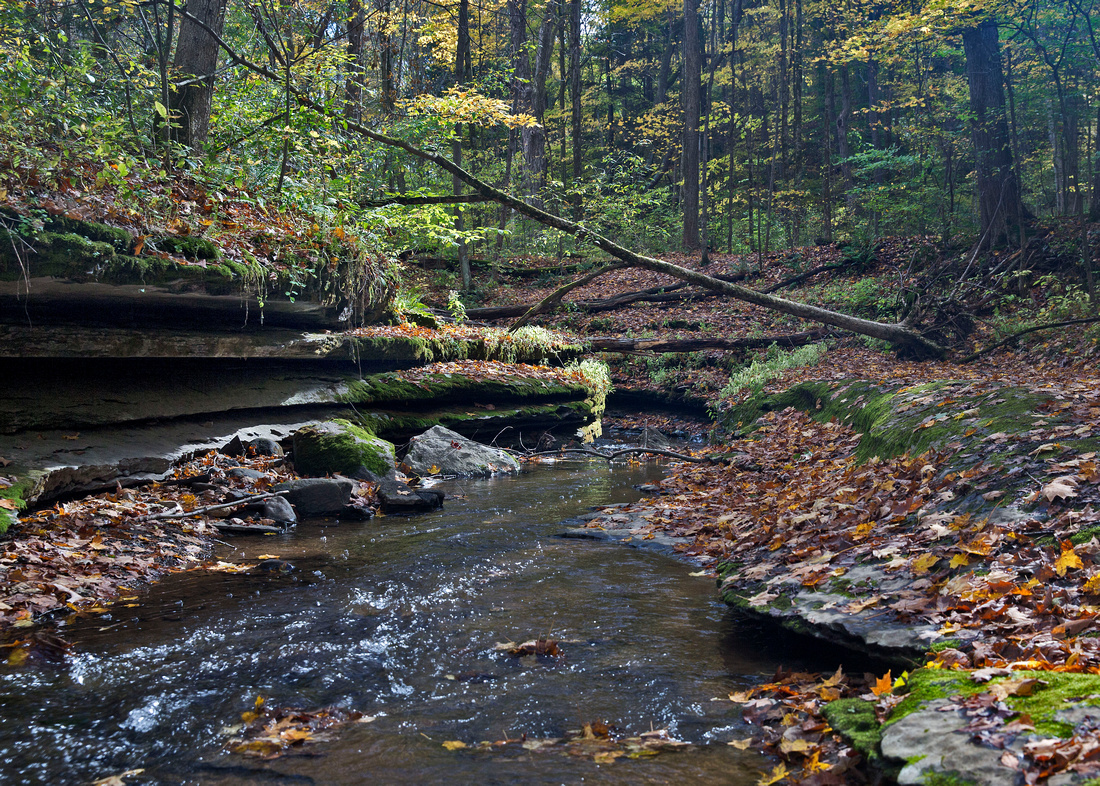 At the end of the Hells Hollow Trail is the waterfall.  Once again, the sandstone eroded away leaving the harder bedrock that created the falls.  In the top right of the next photograph you can see where the forest floor once was. 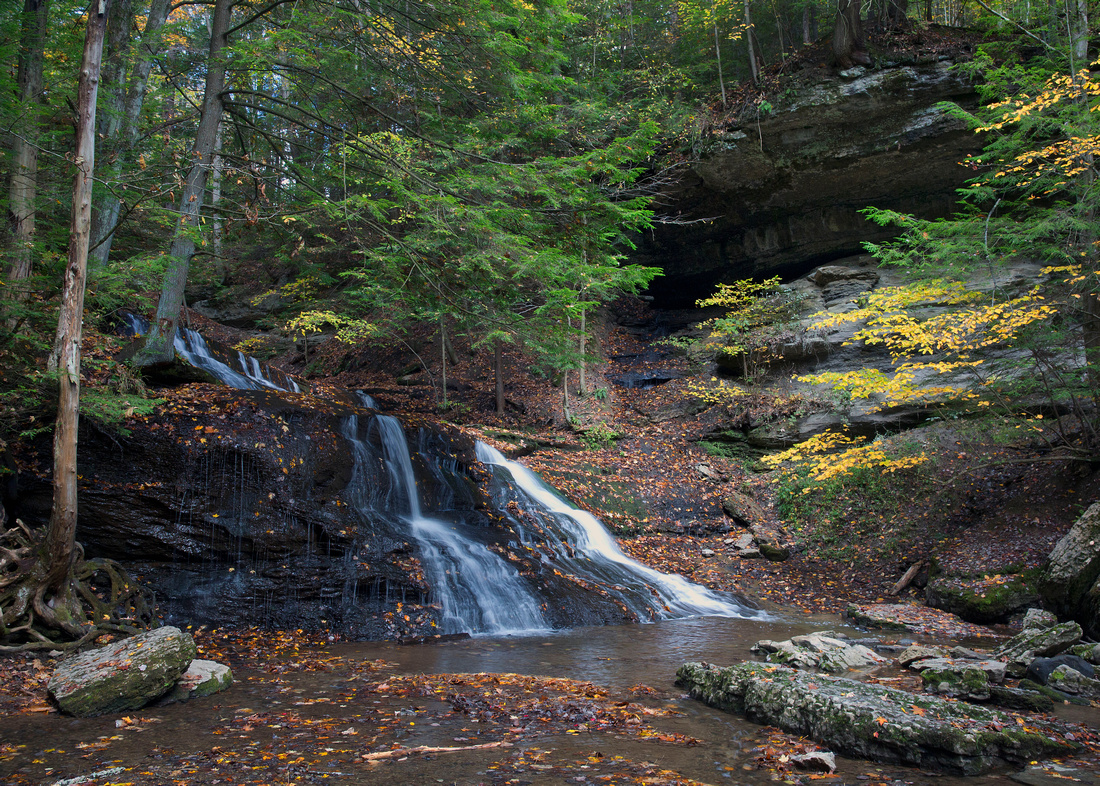 Here is another view of the falls showing the smaller waterfalls upstream. 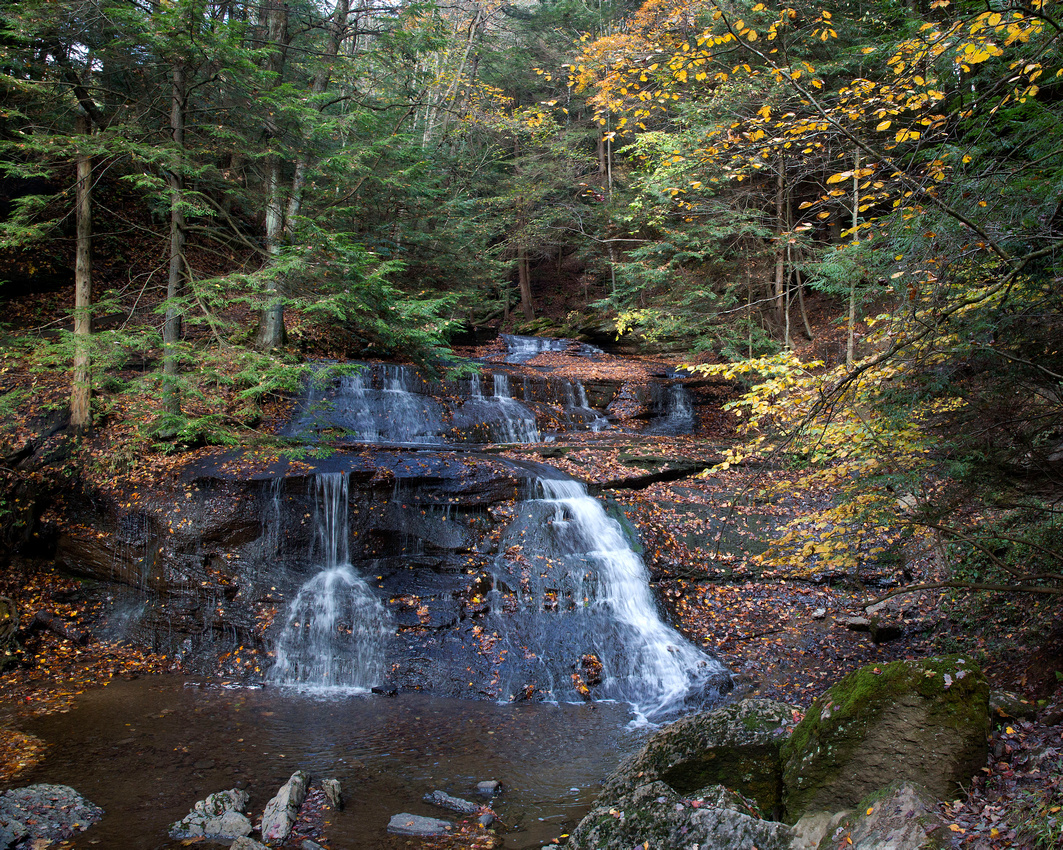 As I promised, if you are still with me, you can now sit back and enjoy the soothing effect of Hells Hollow's waterfall.  Click on the icon to play video. Hell's Hollow Waterfall

High above the falls is the work of thousands of years of erosion.  I wonder how many Native Americans stood on that very spot to get out of the weather. 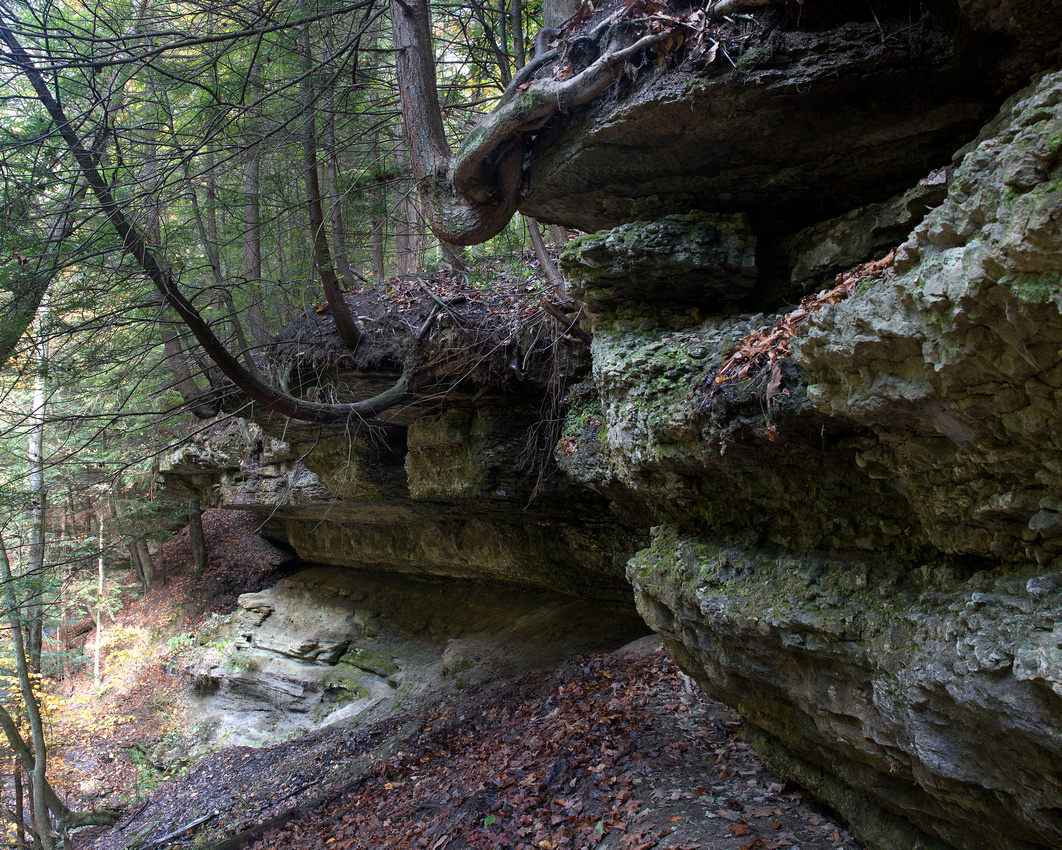 The American Elk rut has come to an end but the rut of the White-tailed Deer will be happening in November.  Below is a high 8-point looking sharp in his winter coat.  By the way, I asked him to move a little to the side to get that dead limb out of the photo.  As you can see, he didn't listen.  Actually, he moved rather quickly the other way and out of sight. 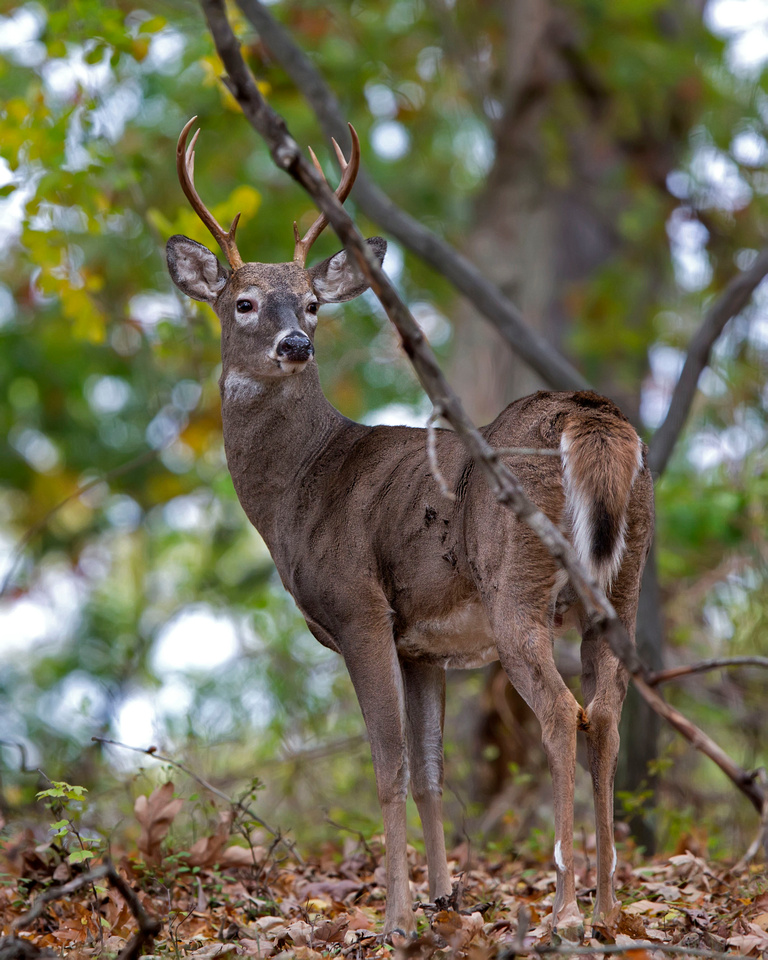 One of the many things in nature I can count on is a large flock of Cedar Waxwings invading my crabapple trees in October.  As a wildlife photographer, it is fun to try to capture these little birds playing with their food.  Sometimes, two birds will toss the fruit back and forth between each other.  Mostly, however, one bird will toss the fruit in the air a couple times before swallowing it whole. 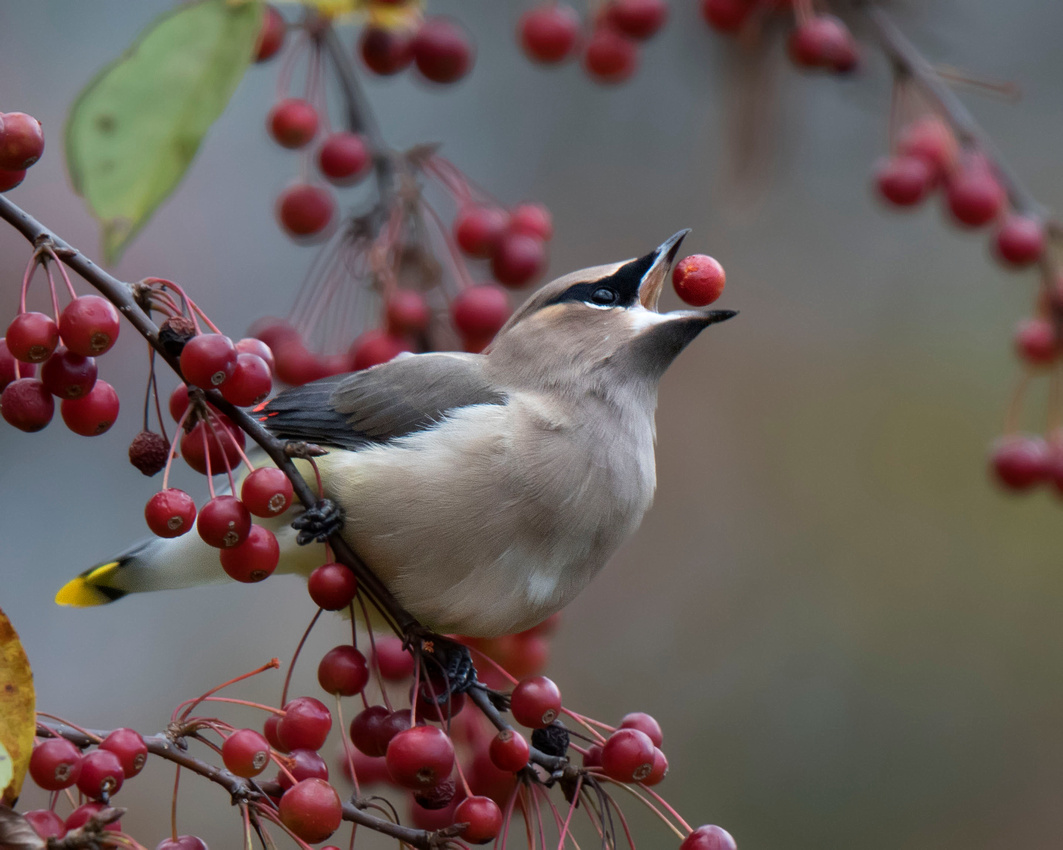 Well, that's it for now.  I hope you enjoyed this autumn themed photo blog.  We still have some exciting times coming before January and February's weather cause a little downtime for wildlife photography.  So keep checking back to see what I've been seeing.

Willard Hill(non-registered)
An exceptional collection of images, Dan. It is hard to pick a favorite as so many are exceptional. I especially like the way you used the lighting to best advantage and how you captured the wildlife in interesting poses. Excellent job on the waterfall video as well.
ruby(non-registered)
Beautiful Images!!!!!
Linda Slone(non-registered)
I look forward to your beautiful photos and interesting commentary. Thanks for all the work you do and for sharing it with all of us who enjoy your blog.
don epstein(non-registered)
Thanks for the beautiful photos of animals and birds I would never be able to see, and the friendly informative comments
Betty Mack(non-registered)
Your photos and video are wonderful. Thanks so much! The cabin looks like a blockhouse - logs hewed square to lessen amount of chink needed.
No comments posted.
Loading...
Subscribe
RSS
Recent Posts
Great Smoky Mountains: My Cades Cove Experience (2021) - Part Three Great Smoky Mountains: My Cades Cove Experience (2021) - Part Two Great Smoky Mountains: My Cades Cove Experience (2021) - Part One Sandhill Crane: New Life in a Western Pennsylvania Marsh White-tailed Deer Favorites of 2020 Big Bulls and Hot Cows in Elk Country Unpredictable Pennsylvania Sparrows: Henslow's and Clay-colored 2020 Warbler Wrap-up No More Warbler Neck Loiusiana Waterthrush - Stream Lurker
Keywords
White-tailed Deer bald eagle American Elk Benezette Common Yellowthroat Lake Arthur Moraine Great Blue Heron Wood Duck Yellow-rumped Warbler
Archive
January February March April May June July August September October November December
©Dan Gomola
Powered by ZENFOLIO User Agreement
Cancel
Continue