Whitetail On The Move

While the common, summertime sighting of the White-tailed Deer is the doe and her fawn or fawns, the male, a little less visible, can be found sporting a brand new set of antlers.  The male's antlers are covered with a sensitive skin called velvet.  Velvet is filled with blood vessels that feed the antlers and after about two to four months, the velvet is no longer needed.  A ring forms at the base of the antlers which stops the flow of blood to the velvet.  The velvet dries up and with the assistance of the deer, it falls off.  You've no doubt heard of a "buck rub".  A "buck rub" is damage done to a sapling, by a buck, while scrapping off the dead velvet.

Below is a seven point buck, in velvet, nearly chin-high in soy bean plants. 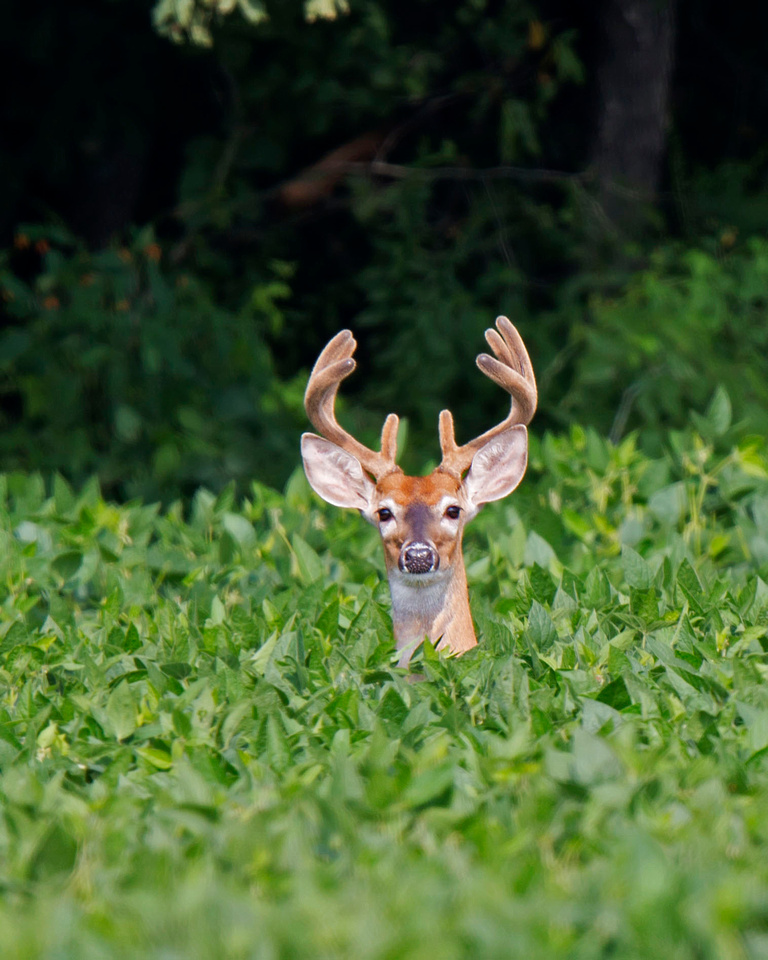 White-tailed DeerUp To The Chin In Soy

Where do you find deer in the summer?  Search the soy fields at dawn and/or sunset.  Soy seems to be a delicacy for the whitetail population.

I've seen quite a few whitetail in soy fields but only a few within 100 yards and most of them fled fairly quickly.  After running about 75 yards, this buck paused as if it's checking its safety. 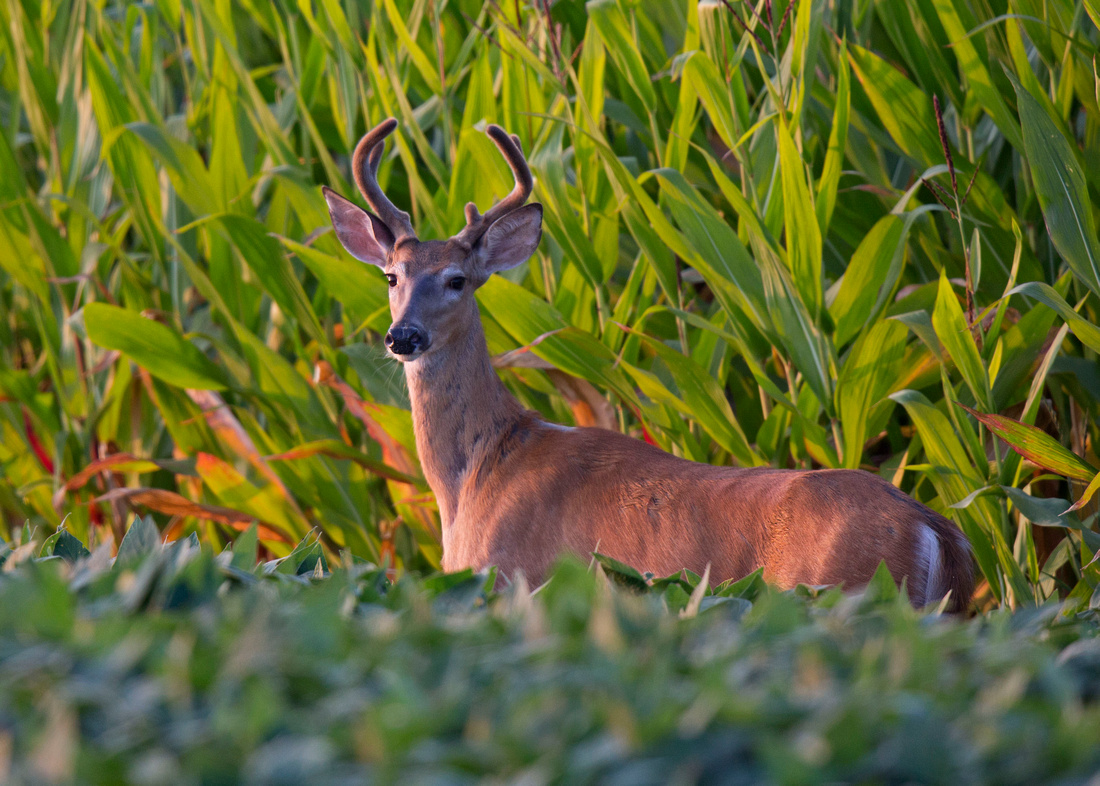 This doe, seen at 7:15 in the morning, was stomping and snorting to warn a nearby fawn to take cover. 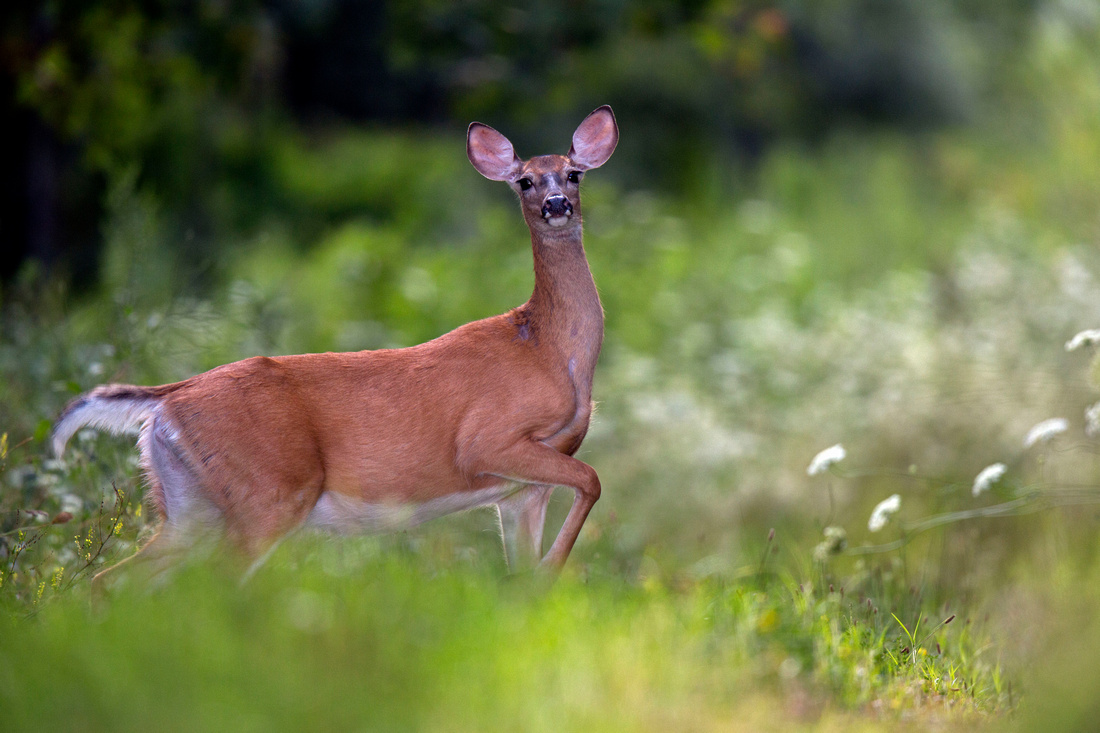 The next two photos are of a seven-point buck seen in Moraine State Park.  While a friend, Dean Williams, and I were watching a hilltop for various birds species, this buck came out of the woods and watched. 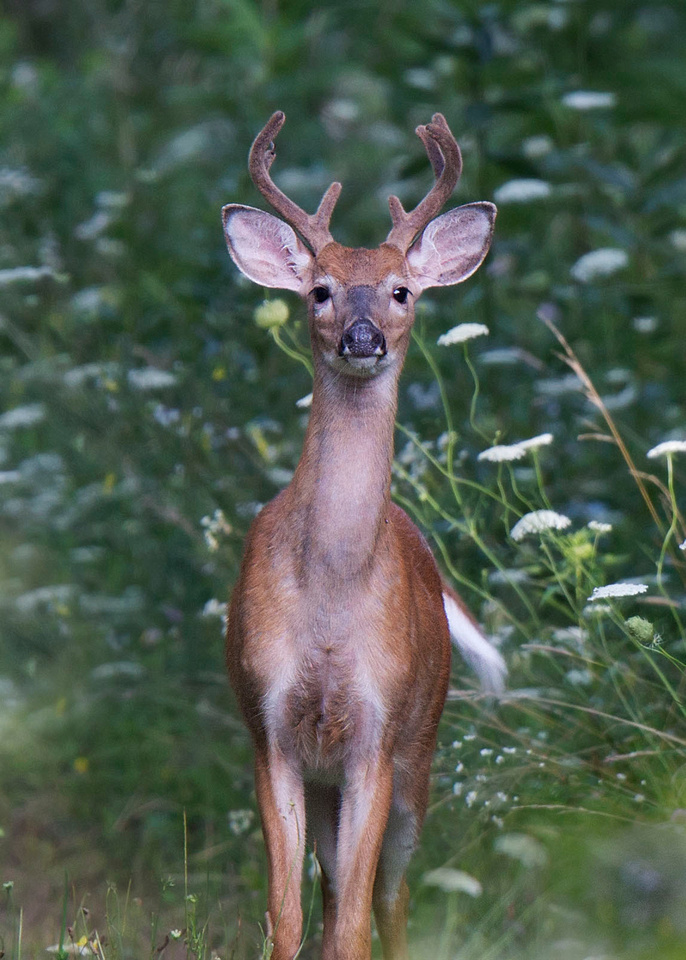 He disappeared into the woods only to return about a half hour later.  He watched us but he also went about his business feeding; even turning his back on us as if he knew we weren't a danger to him.  As a wildlife photographer, one wants clean surroundings on a portrait.  I feel this shot would have been much better had it not been for the out-of-focus Queen Anne's Lace flowers in the foreground.  We don't have control where wildlife stands so we have to take what we are offered by the animal and hope it moves into a more desirable location. 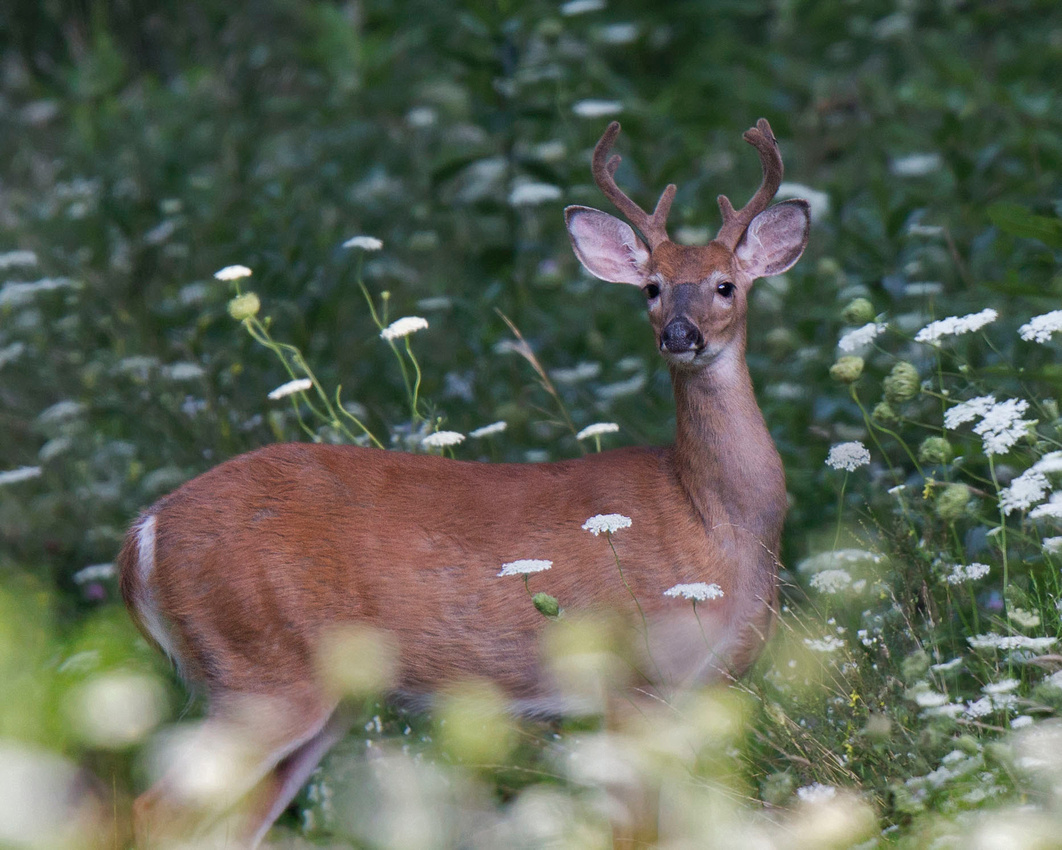 I've seen thousands of White-tailed Deer in my lifetime and it will be a thrill to see the next.  This was a simple post on a common subject but I hope, in some way, I recreated the feelings it brought me when I experienced it.

Willard Hill(non-registered)
An excellent series, Dan. One of my favorite activities is photographing the bucks in the summer. I like to find where the bachelor groups are concentrated around grain fields. There is not many soybeans planted in our area, but I am sure they would be one of my favorite spots to watch. Grain fields, and Soybean fields do not make for the most appealing, natural looking backgrounds, but I still film the bucks there as that is about the only place one can see them consistently in summer.
No comments posted.
Loading...
Subscribe
RSS
Recent Posts
Sandhill Crane: New Life in a Western Pennsylvania Marsh White-tailed Deer Favorites of 2020 Big Bulls and Hot Cows in Elk Country Unpredictable Pennsylvania Sparrows: Henslow's and Clay-colored 2020 Warbler Wrap-up No More Warbler Neck Loiusiana Waterthrush - Stream Lurker Striking Gold in a Pennsylvania Wetland Midnight Blue Lil' Bandit
Keywords
White-tailed Deer bald eagle American Elk Benezette Common Yellowthroat Lake Arthur Moraine Great Blue Heron Wood Duck Yellow-rumped Warbler
Archive
January February March April May June July August September October November December
©Dan Gomola
Powered by ZENFOLIO User Agreement
Cancel
Continue