Feathered Fishermen And A King

How many of you have ever seen a Belted Kingfisher hunt for food or have had a Green Heron fly straight toward you?  Have you ever had the experience of watching a majestic bird of prey pick its food out of a lake?  If you haven't, hopefully the photos I'm sharing in this blog will create a desire to step away from the evening television or get up early in the morning and get out there to witness nature that is happening all around us.  Can "nature" happen?  Who knows! May not be a correct use of the word but it gets my point across.  Right?

There he sits, a Belted Kingfisher, perched on a bare branch extending out over open water.  This is a typical place to find a Kingfisher.  He will sit here until he spots something in the water.  At that time, he will fly out and dive into the water.  Then, as he sings out his distinctive, rattling call, he'll return to his perch with his catch. 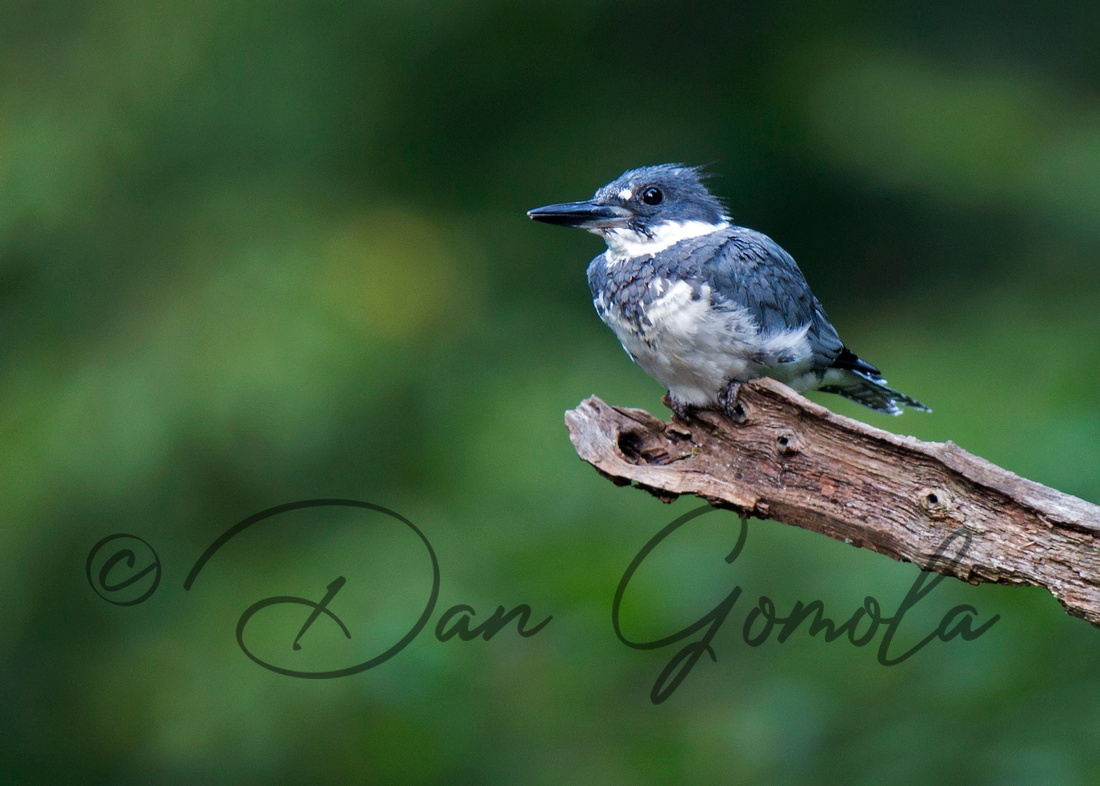 Below is a Belted Kingfisher in flight over a shallow section of a lake. 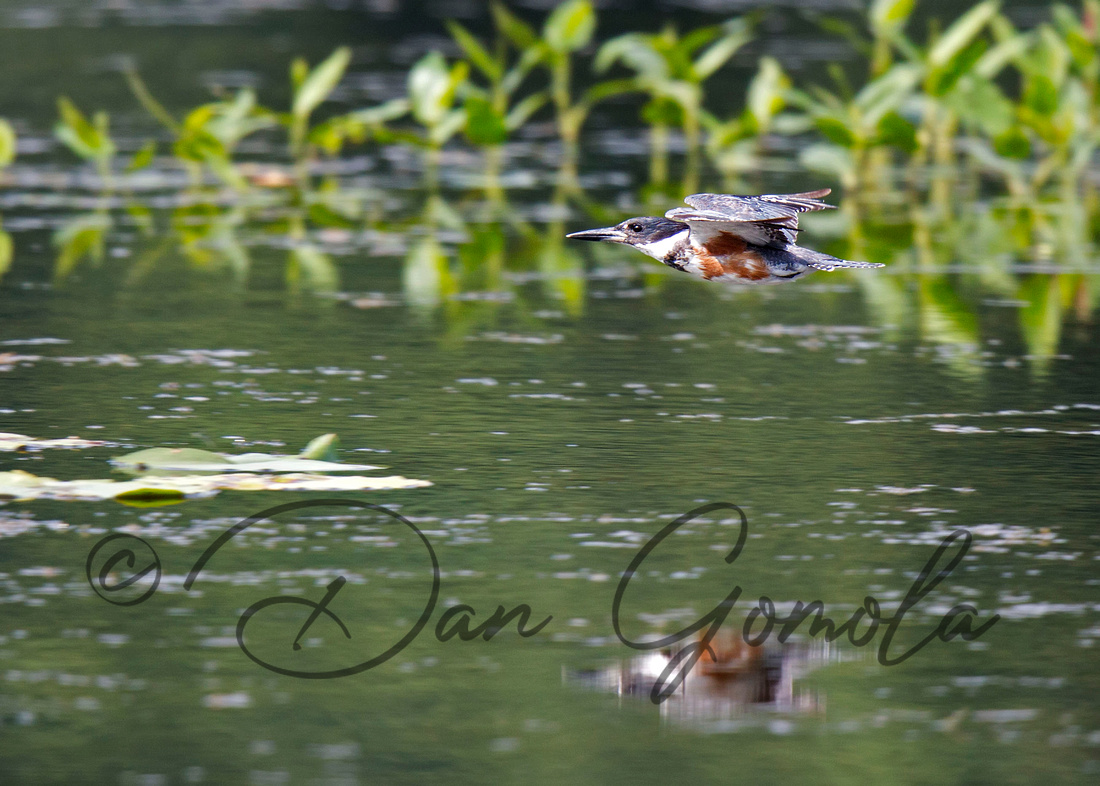 A kingfisher can dive up to 23 inches for a fish or pick off a frog in the mud just below shallow water.  In this photo, a Belted Kingfisher is exiting the water after spearing a fish. 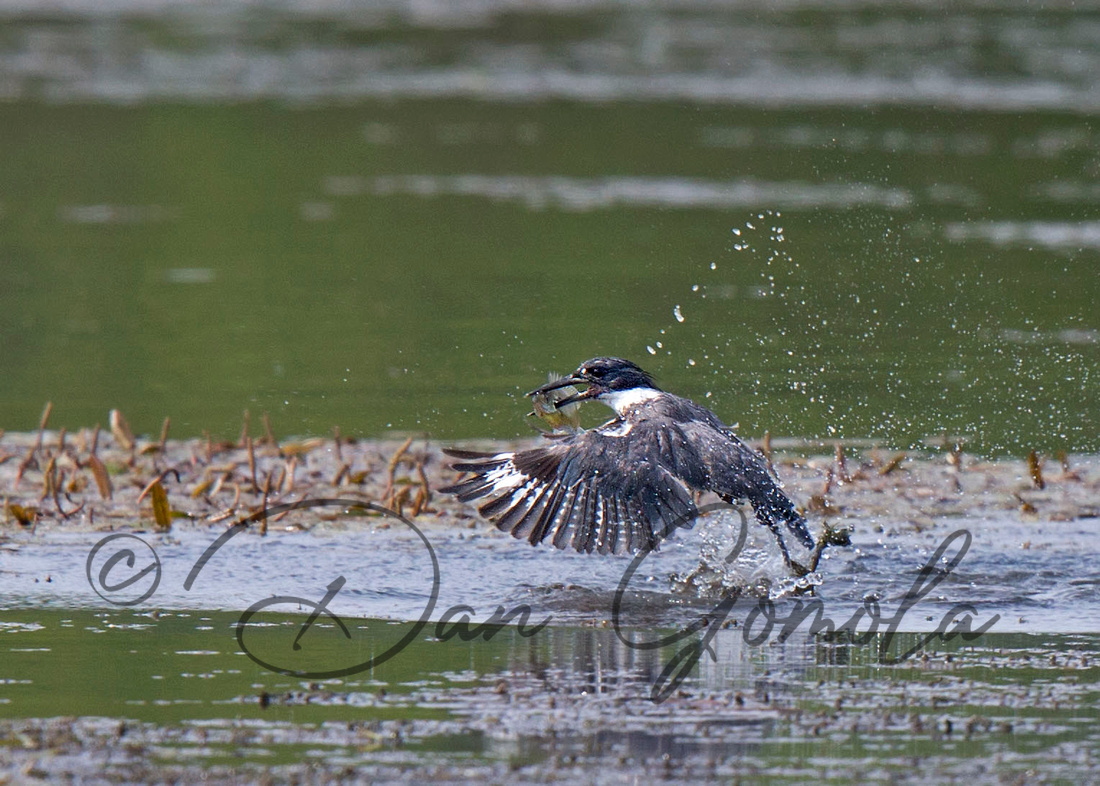 I spotted this juvenile Green Heron hopping amongst the branches to get a closer look into the water below. 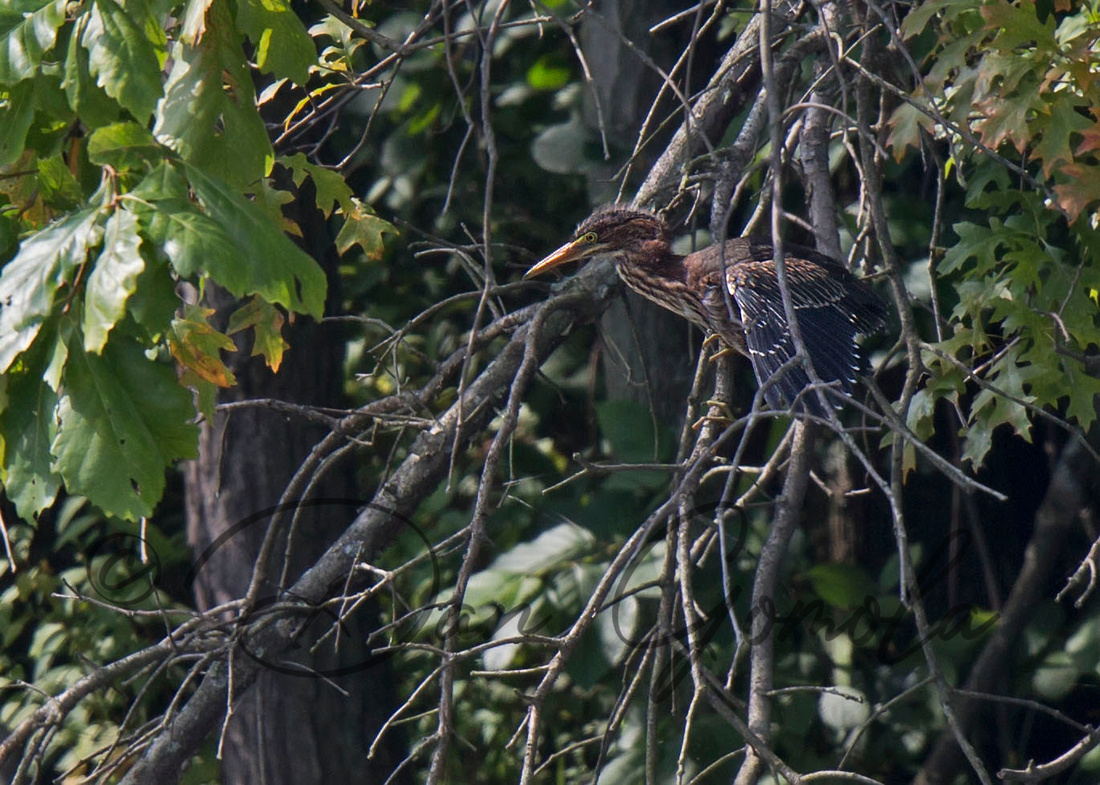 After a period of "hunting" it took flight and headed straight toward me.  I have to say, the Green Heron isn't a large bird.  It's about the size of a big crow.  Trying to find a bird in flight through a long lens is difficult but once I got it in the viewfinder I was able to keep it there until it passed by me.  I love the appearance of "aviator" goggles in the coloring around its eyes. 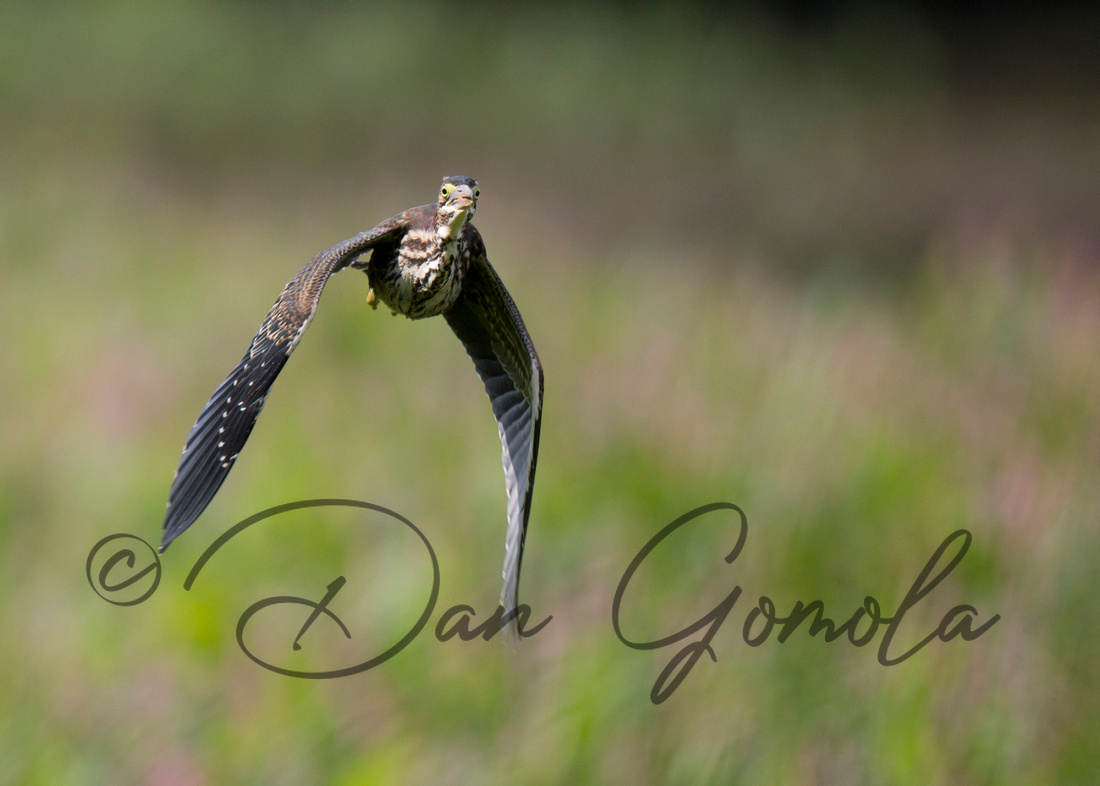 So nice I thought I'd show it twice! 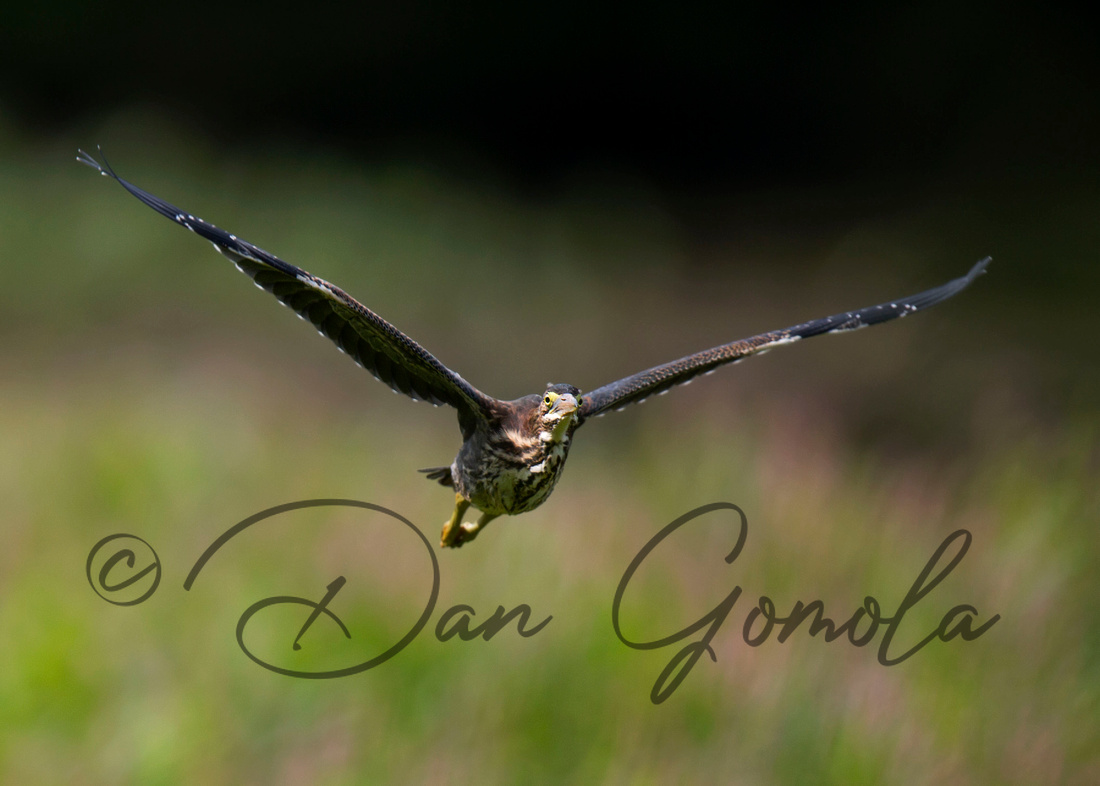 Another Belted Kingfisher had my attention until I heard a tremendous splash to my right.  I was totally oblivious to an Osprey circling above until it hit the water to make a catch.  I swung my lens around only to capture photos of the big bird back in the air.  I'm not one who knows a lot about fish so I don't know what species it caught.  I can tell you it was pretty big. 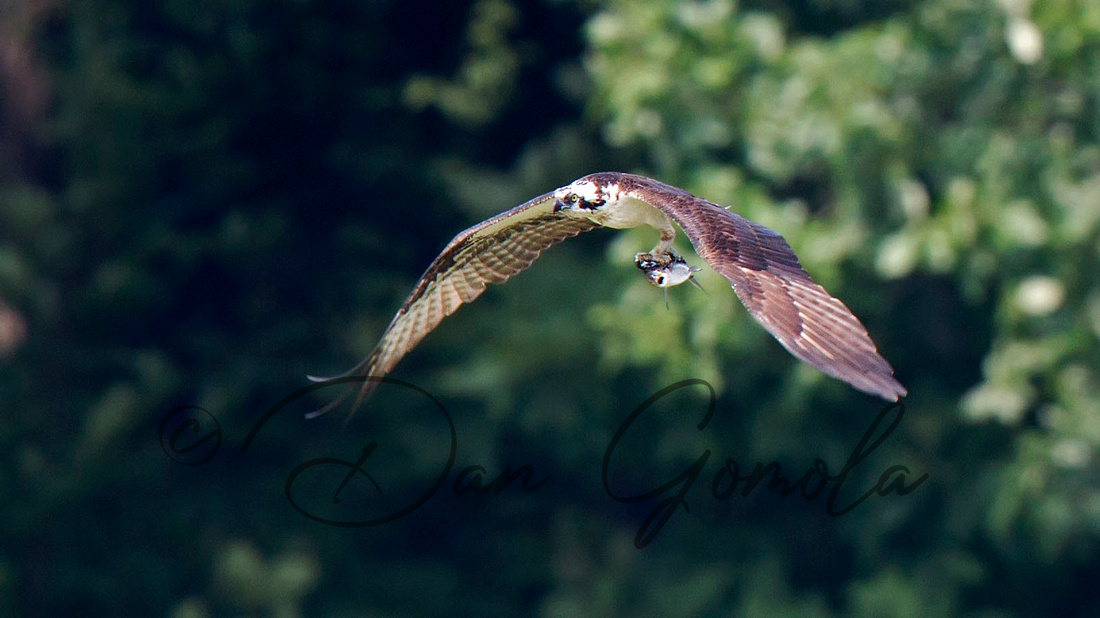 An Osprey is 22 to 25 inches long.  This fish looks to be about half its length.  I like this photo because it looks like the Osprey is skateboarding through the air on a "fish board". 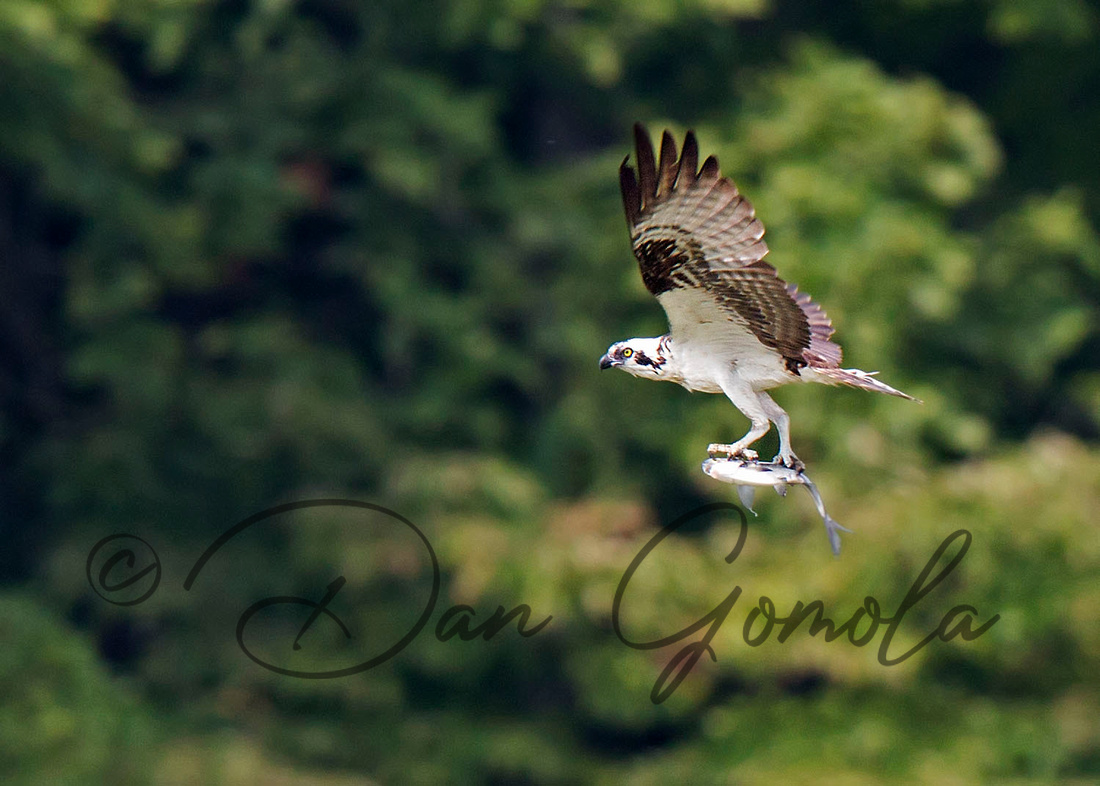 Well, those were my feathered fishermen.  Now for the king.

Have you ever sat and watched an Eastern Kingbird hunt for insects?  They seem to like to perch on a tree limb, stump on the ground or a wildflower in a field.  I've seen them practically anywhere they can find insects.  I saw this kingbird on the highly poisonous Pokeweed plant.

Just a little sidebar about the Pokeweed plant.  Although it appears that there is nothing good about this poisonous plant, its toxic chemicals are actually being tested for use as a treatment of cancer and HIV. 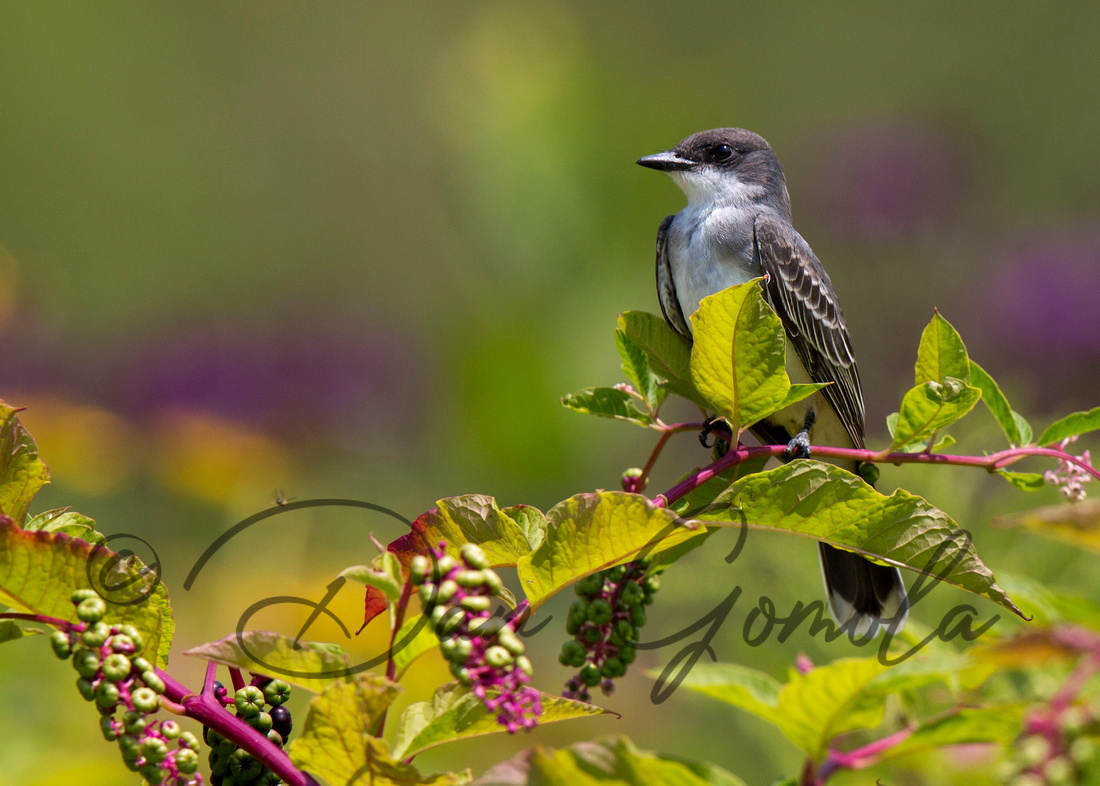 Another view of the Eastern Kingbird. 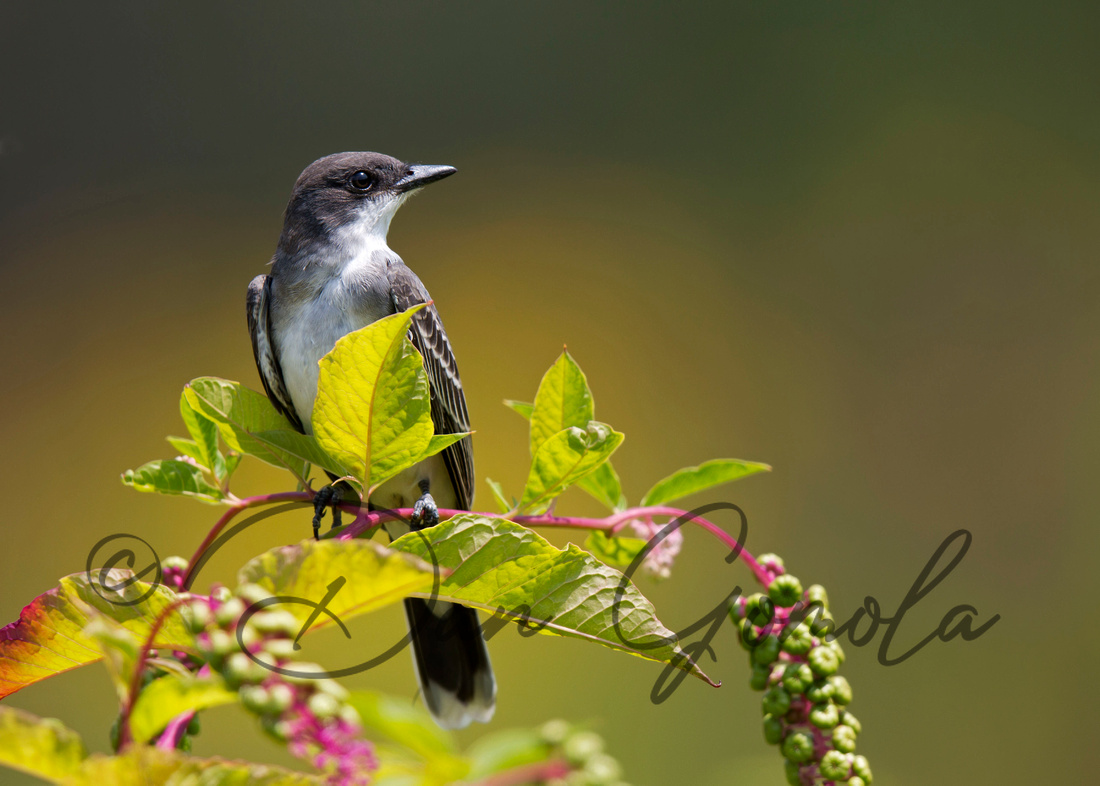 Did these photos inspire anyone?  This is what I saw in just a few short hours by a lake.  Morning and evening are the best times to have activity but when it comes to birds, I don't think they ever sit still very long.  Take a friend or go alone, just go!  You don't know what you're missing.