Did you know that a White-tailed Deer fawn has no scent?  They have a reddish-brown color with white spots providing camouflage when they are lying on the ground. Both their coloration and their lack of scent protect them from predators.

Wildlife’s keen sense of hearing and smell, and ability to camouflage itself is important to its survival.  If a turkey could smell, do you think you would ever shoot one?  Their sharp eyesight alerts them with any slight movement.

As someone who enjoys photographing wildlife, I sometimes dawn the camo.  No, I don’t think I’m fooling anything.  For a true wild animal, camouflage can help because the wildlife may approach a little closer before hearing the shutter of a camera, spotting a slight movement, or smelling “human”.

Sometimes, unlike humans, an animal can be right out in the open and still not be seen.  Take the Eastern Screech Owl for instance.

Although an Eastern Screech Owl is no bigger than a pint glass, its mysterious call in the night will get your attention.  During the day, these camouflaged birds hide out at least 12 feet off the ground in nooks in trees making them difficult to find. 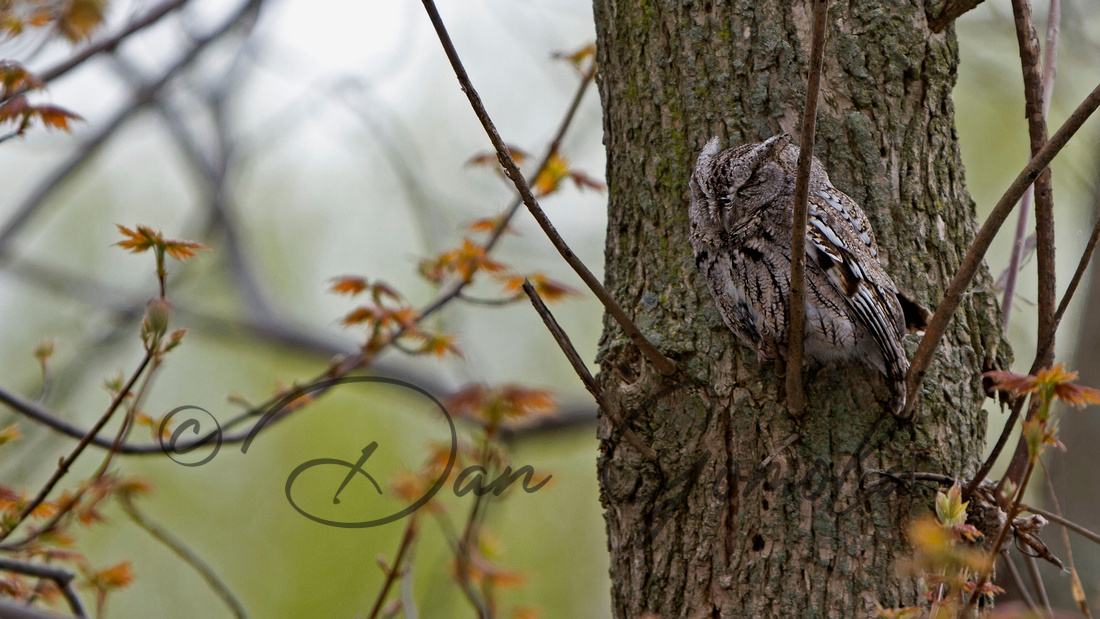 On warm summer evenings, Common Nighthawks can be seen roaming the skies in graceful loops, flashing white patches located near the tip of each wing.  Mostly, they are searching for insects.  These common but declining birds do not build a nest.  Instead, they lay their eggs directly on the ground surrounded by anything from grass to gravel.  Their young are so well camouflaged that they’re hard to find, and even the adults seem to vanish as soon as they land.  They can be difficult to find during the day too.  I recently spotted an unusual “lump” on a tree limb and it turned out to be a Common Nighthawk. 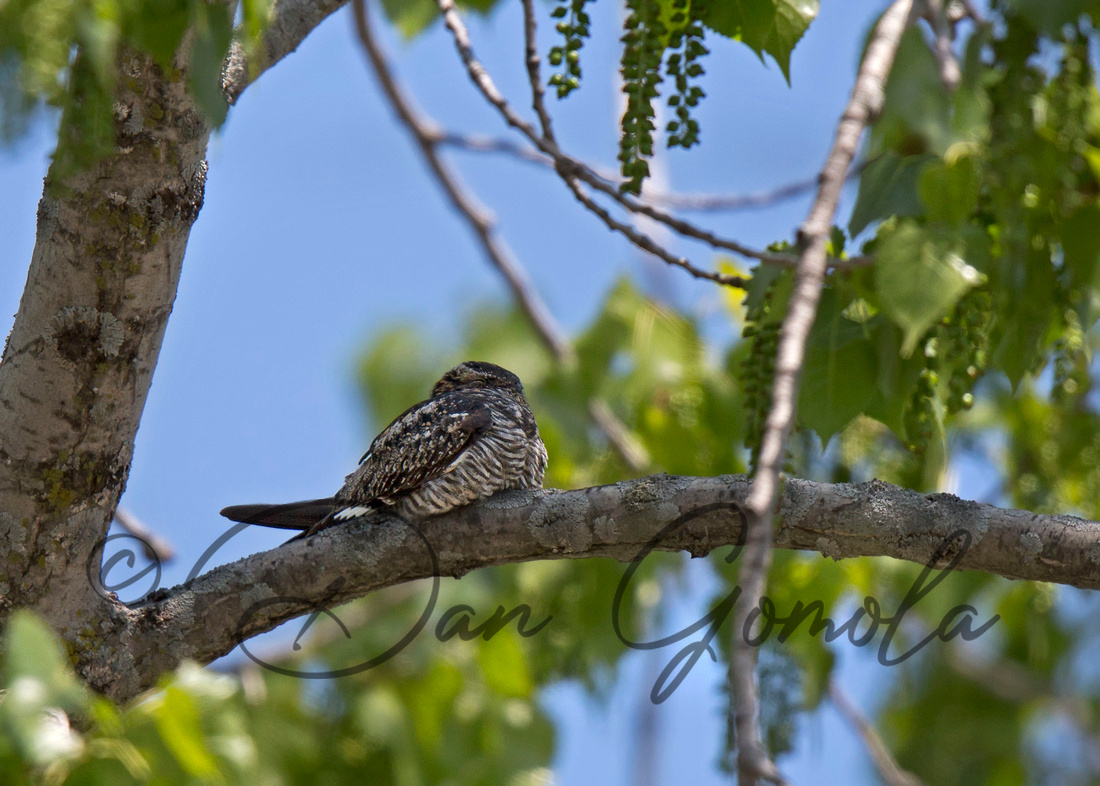 The American Woodcock is a superbly camouflaged forest floor dweller.  It uses its long bill to probe in the leaves for earthworms. An American Woodcock’s eyes are positioned high and near the back of their skull. This lets them keep watch for danger in the sky while they have their heads down probing in the soil for food.

I recently came across a nesting Woodcock.  Although the nest is out in the open, it was well hidden in the high grass.  The brown-spotted plumage of the Woodcock helped to disguise her.  Someone pointed her out to me and it still took me several minutes to find her from 12 feet away. 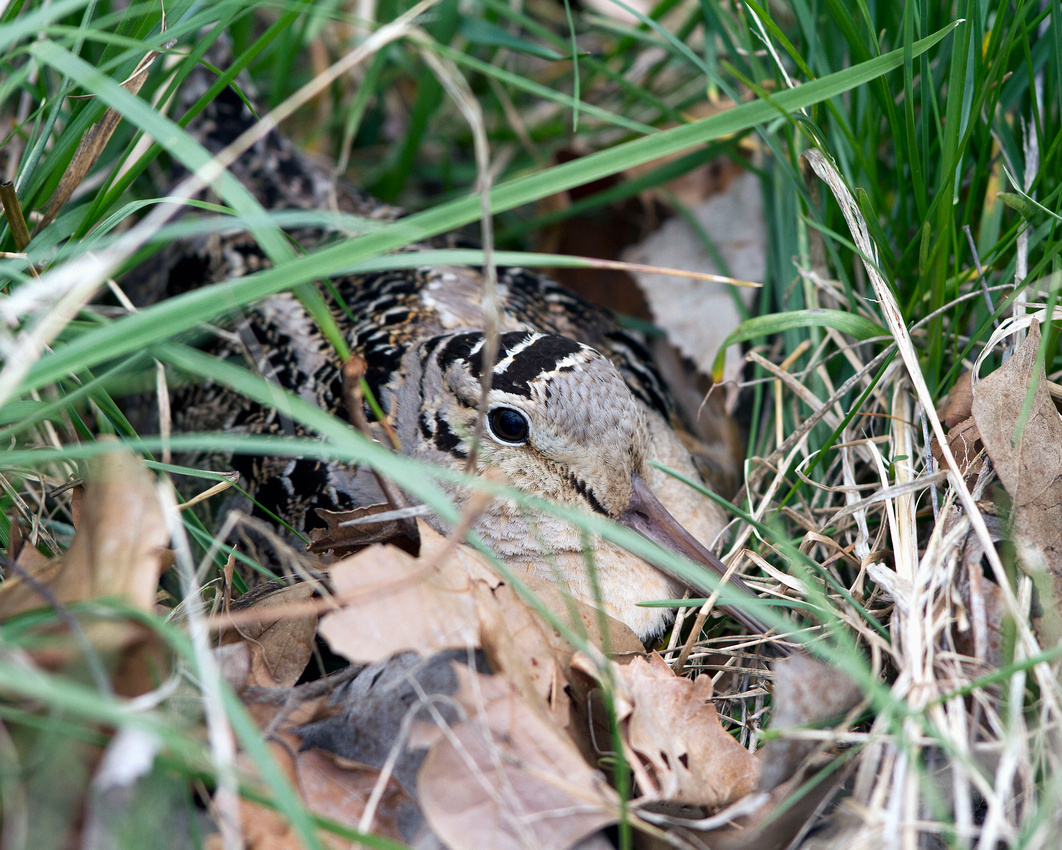 In the deep shade of the woods, several yards away, I found another adult preening after a cool bath in a swampy marsh. 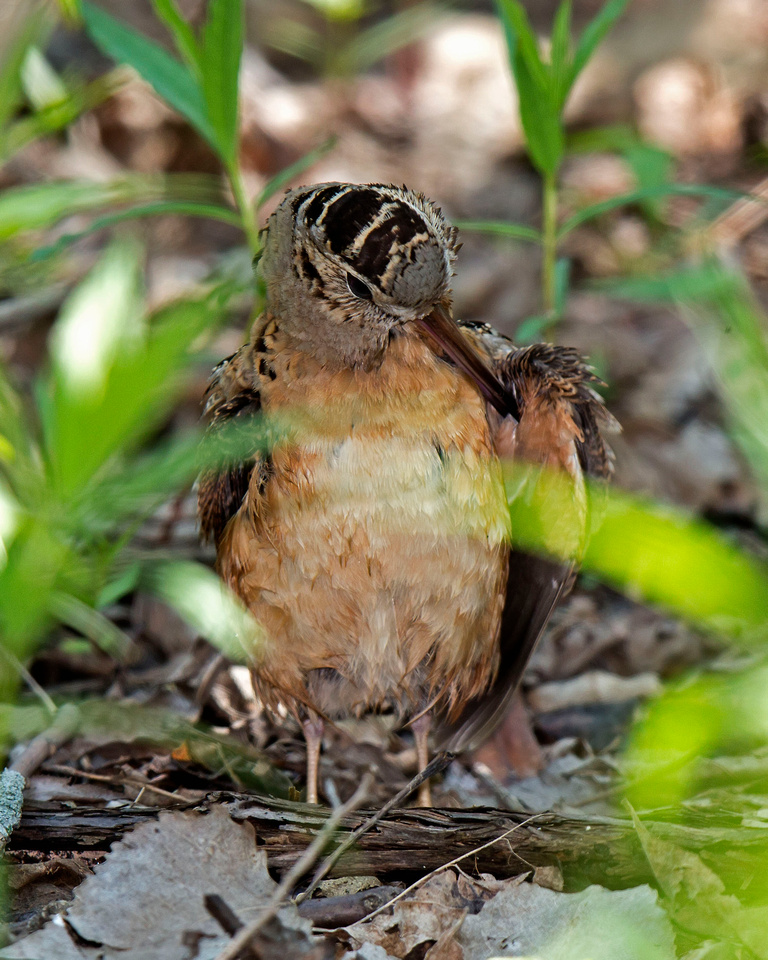 Few singers can sustain their music up to 10 seconds like the Winter Wren.  When not singing, it jumps around the forest understory looking for insects, insect larvae, millipedes, spiders, and others.  There were times this Winter Wren went undetected under and between logs and resurfaced several feet away.

The Winter Wren will built several nesting sights.  Some they use to produce multiple broods but some are used as decoys or for the male to roost, away from the real nest. 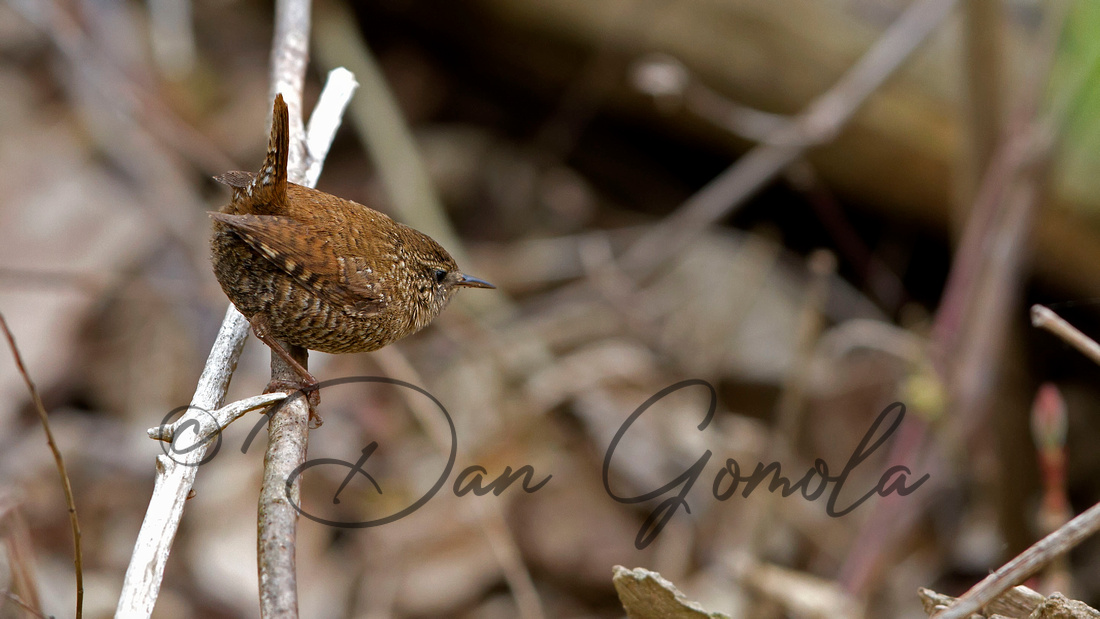 Usually heard and not seen, the Swainson's Thrush forages in the dense undergrowth branches or stumps.  Below is an interesting fact I found on "The Cornell lab of Ornithology" website.  "The Swainson’s Thrush’s whirling song has a ventriloqual quality that can make it difficult to track. This may happen as the singer moves quickly from one perch to another between songs. It may also have to do with the sounds’ reverberation in dense foliage. Swainson’s Thrushes also sometimes sing quiet songs that create the illusion that its song emanates from a more distant location." 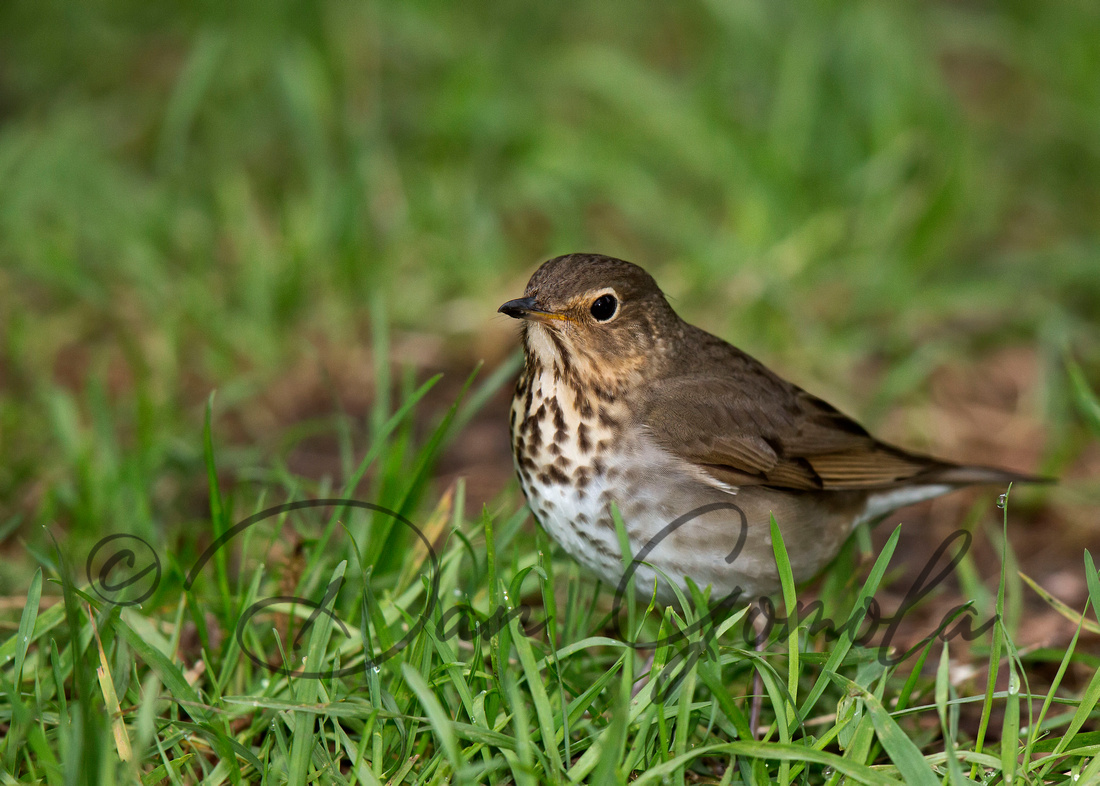 The Brown Thrasher is one of the larger songbirds we'll find in Pennsylvania.  Even with its bright yellow eyes and bold patterns it is hard to find them in a tangled mass of shrubbery.  Brown Thrashers are cheerful singers possessing one of the largest repertoires of any North American songbird.

This Brown Thrasher, in the setting sun, positioned itself in the shrubbery in such a way that it kept some branches between us. 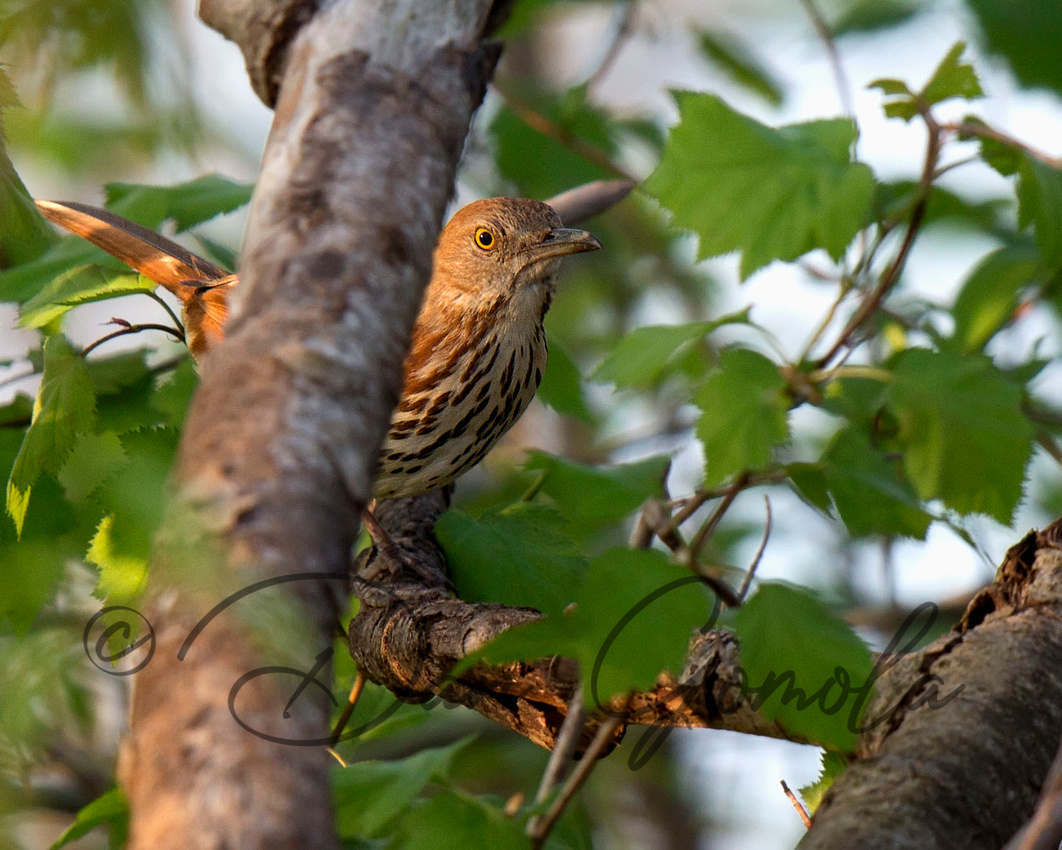 Its mate however, was caught off-guard on the forest floor. 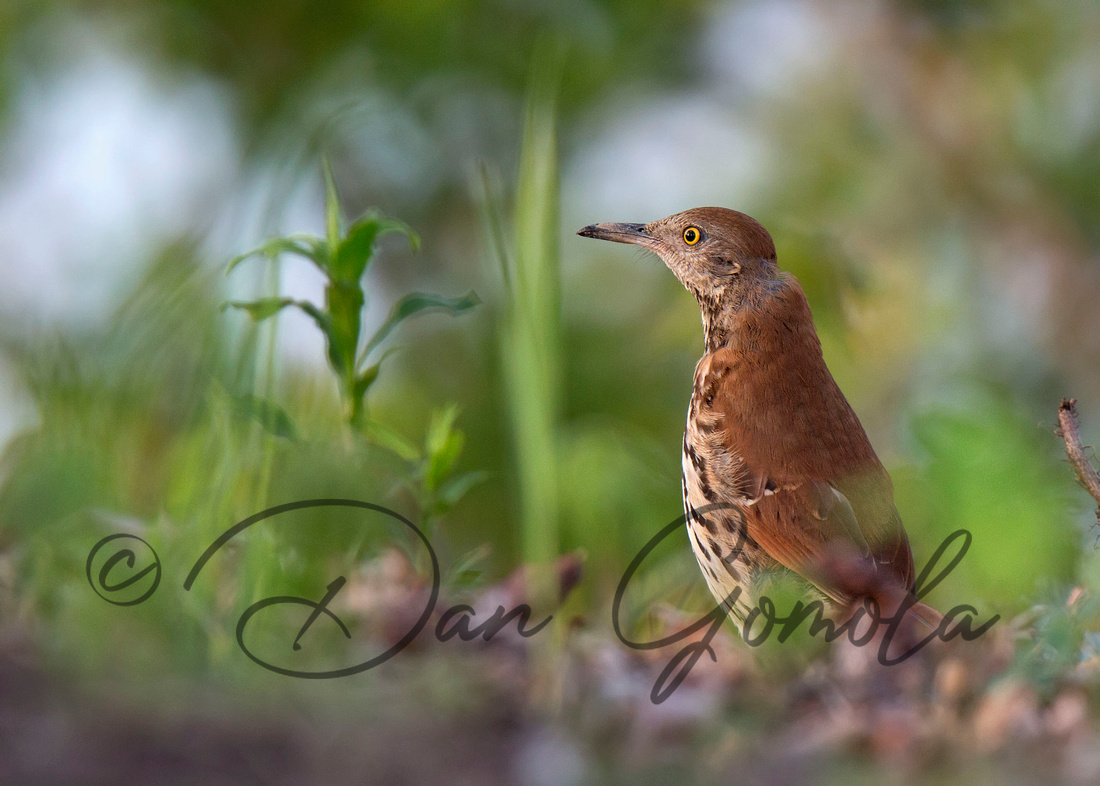