An Evening At Lake Wilhelm

A couple weeks ago my wife and I took our dogs and spent the evening at Maurice K. Goddard State Park,  featuring 1680 acre Lake Wilhelm, in Sandy Lake, PA.  Wildlife you can count on seeing at Lake Wilhelm is at least one nesting pair of Bald Eagles, a couple Osprey nests, various Gulls, and several species of waterfowl during migration.  It was getting late in the spring migration so I was happy to see some species that haven't left yet.  Topping the list were a few Common Loon spread out around the lake. 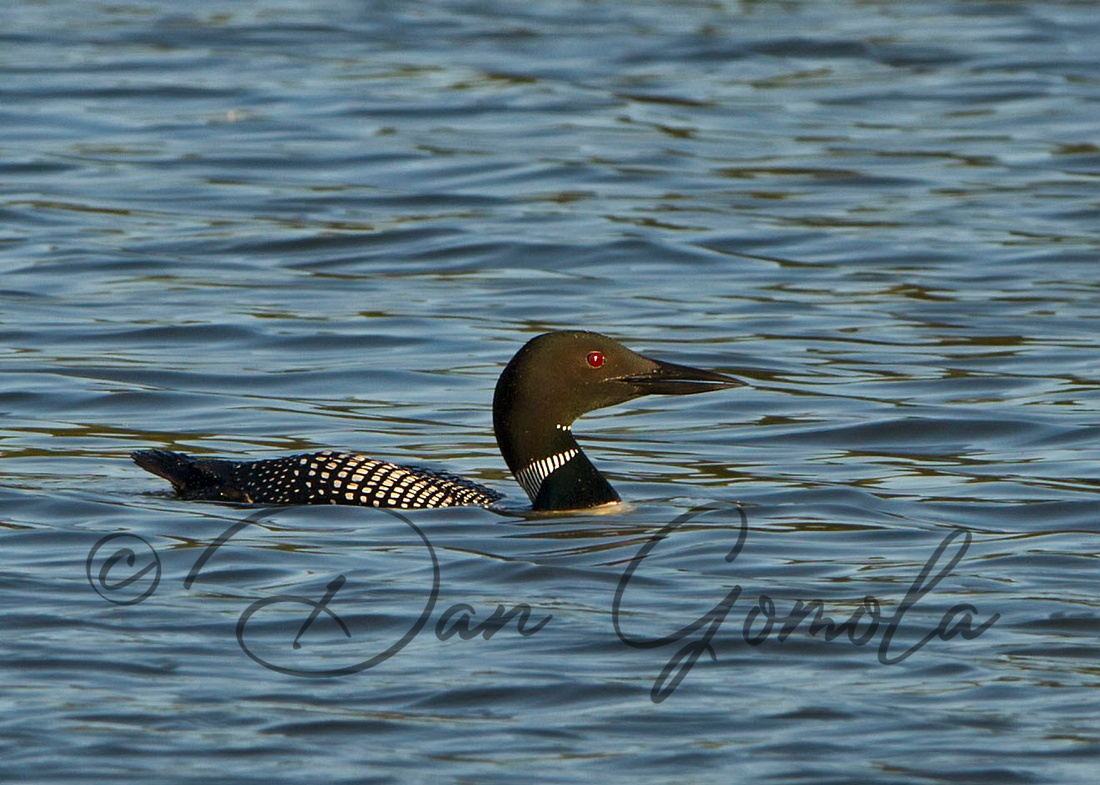 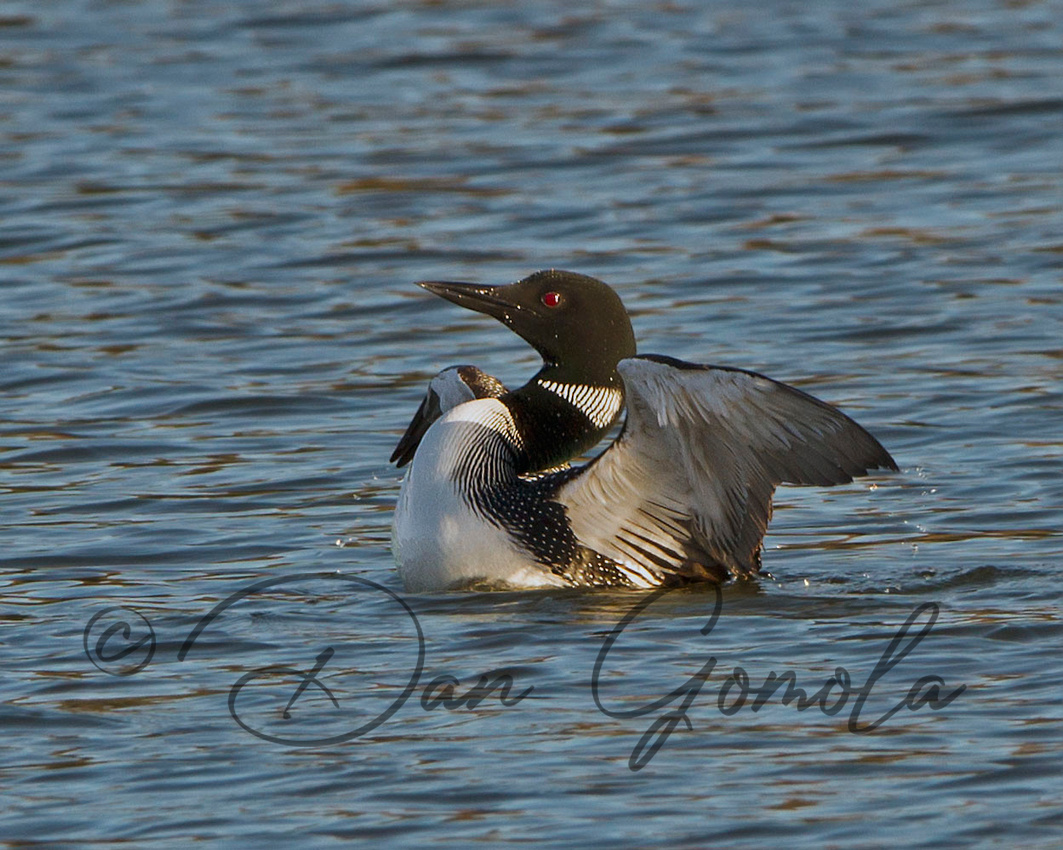 There was not a shortage of Ring-billed Gull's to be seen.  Many times the gulls are standing on the shoreline or the docks but this night, they were flying back and forth bringing in something to eat. 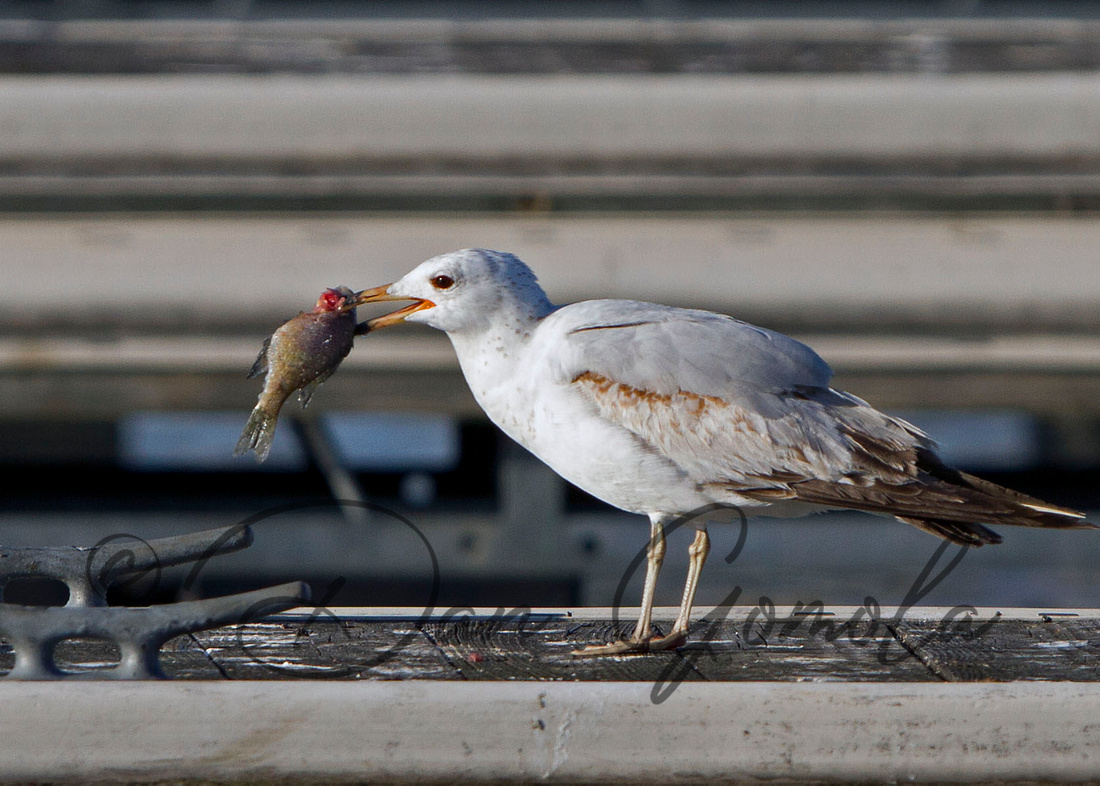 I was able to photograph the Caspian Tern for the first time.  Actually, I don't think I ever saw a Caspian Tern until this night.  Someone could argue that these are Common Terns but I would disagree.  The Common Tern has red legs.  These are definitely black and the red bill is thick, the characteristics of a Caspian Tern.  There were only four of them mixed in with all the Ring-billed gulls.  Here are three of them taking in the setting sun on the empty docks. 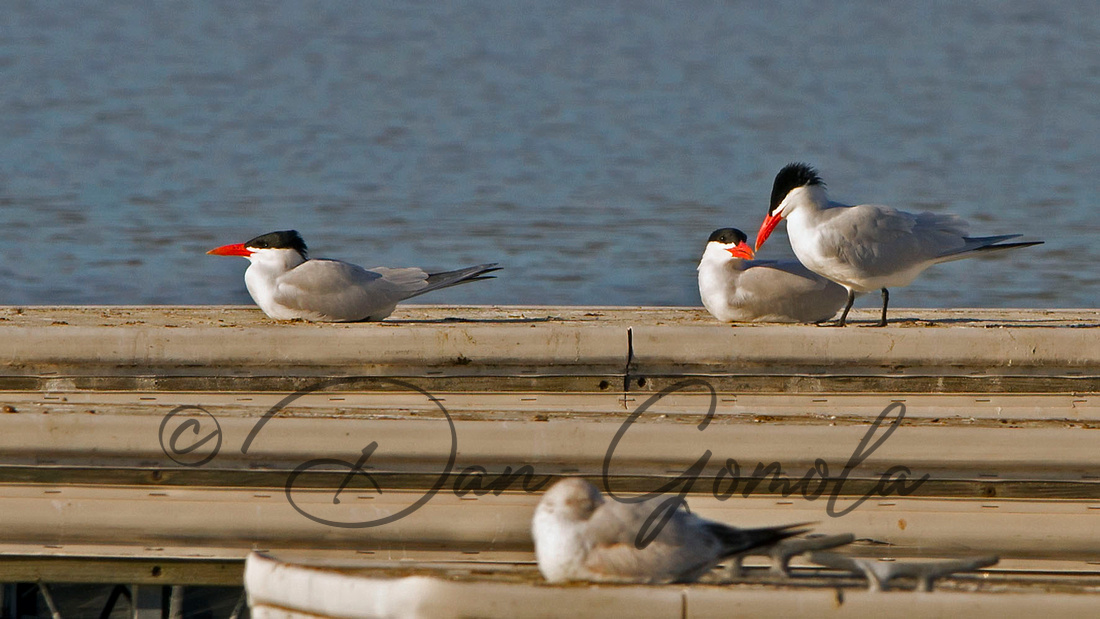 This Caspian Tern has an odd way of transporting its dinner. 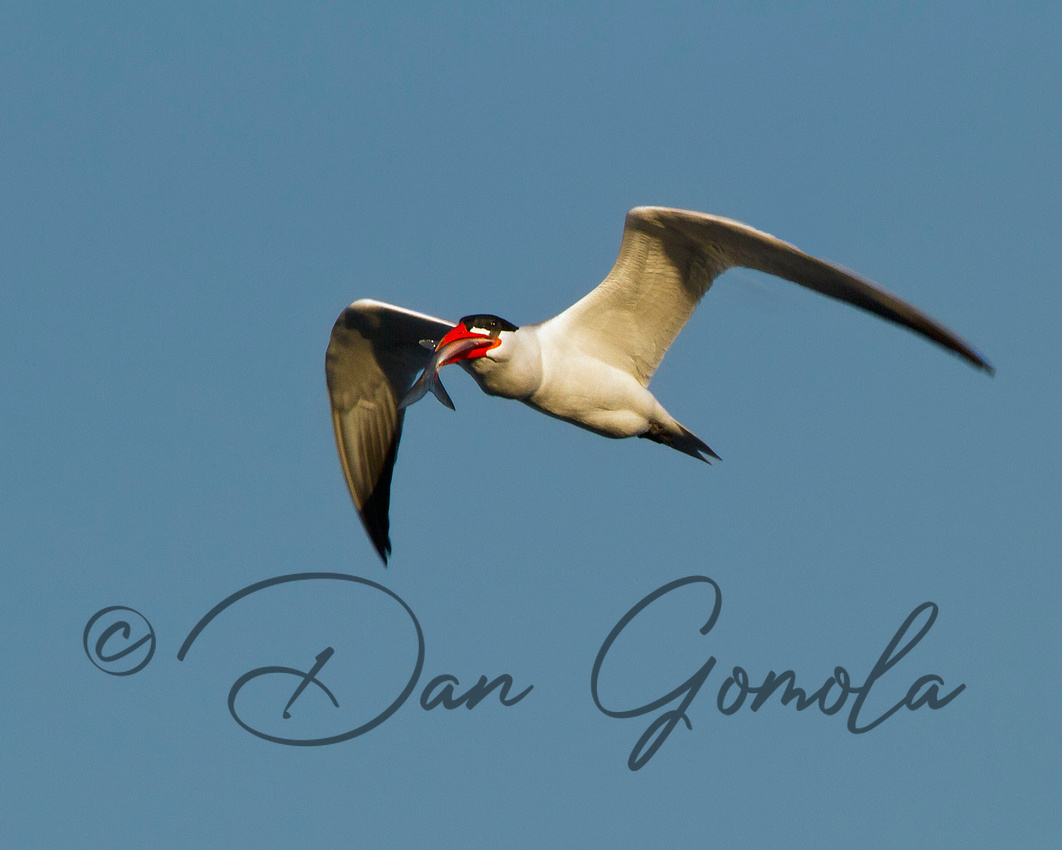 There were a pair of Mute Swans exploring the shallow waters for aquatic plants.  You can get lost in their beauty just watching them patrol the lake.  This photo was made seconds after the swan pulled its head out of the water.  Note the warm glow of the setting sun. 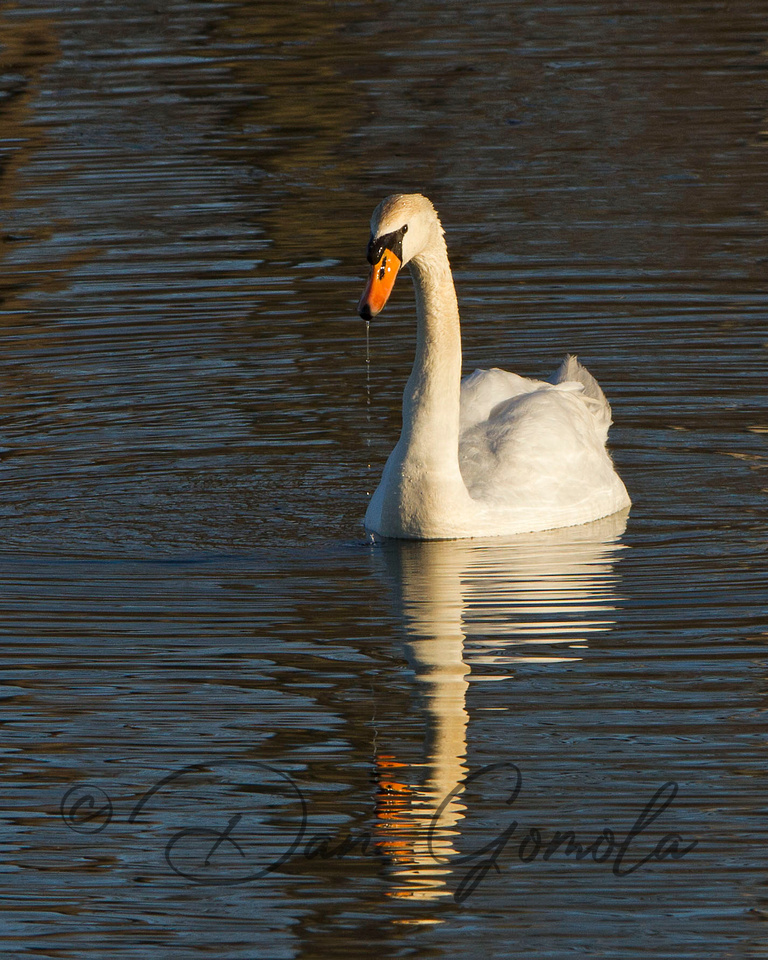 The sun was beginning to set and all of a sudden an Osprey with a fish in its talons was attacked by a Bald Eagle.  Apparently, the eagle didn't have a fish of its own.  I photographed the attack but it all happened a couple hundred yards away and my shutter speeds were too slow to capture that action with sharp images.  I did manage to get one sharp photo of the Bald Eagle, empty handed, flying into the setting sun on the way back to its nest. 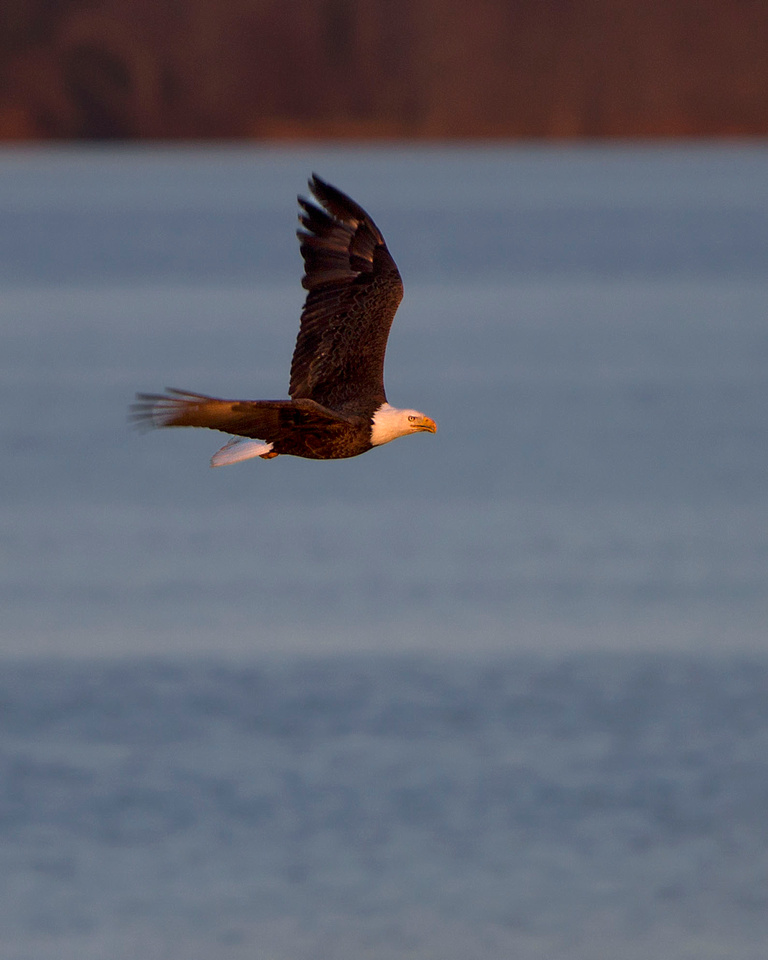 Only minutes later, the Bald Eagle was back.  We watched as it swiftly skimmed the lake, grabbed a fish, and turned back toward the nest.

Photographing wildlife and nature is an exciting hobby and many times you don't get the shot you wished for.  In this case, it was too dark to photograph the eagle but it was still a pleasure to watch it snatch the fish out of the lake.

As the sun set on another wonderful day in Pennsylvania, we started home. As always, I try to include all topics in my blog posts but I don't post all the images.  Most of the time I have more photos so I place them in the appropriate galleries on my website.  If you're interested, please remember to check out the galleries for additional images.