Off The Beaten Path

This weekend I decided to spend a little time trying to photograph woodland birds or birds that find the deep woods a suitable habitat.  I went to nearby Moraine State Park and with a bit of patience I was able to photograph some species of birds for the first time.  The nice weather brings more people out to enjoy our parks.  The once empty trails and shorelines are filled with boaters, bikers, runners, picnickers, and people fishing. In order to be alone to give yourself a better opportunity to see wildlife, one now needs to venture off the designated paths.  With nearly 14,000 acres of accessible land, it isn't too difficult to lose yourself in nature.

This first photo is of a Red-Eyed Vireo who is usually found in deciduous forests with a shrubby understory.  The Red-Eyed Vireo, known for its singing endurance, has bright red eyes which are unusual in songbirds. 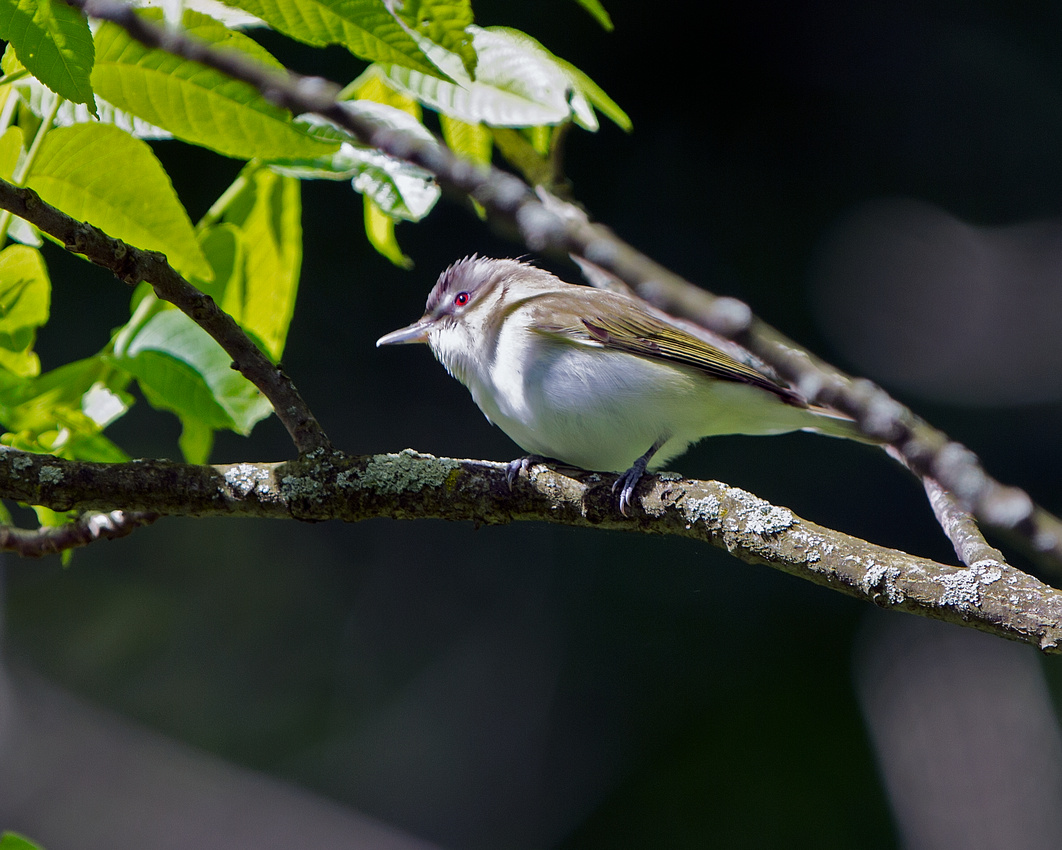 The Common Yellowthroat, the most common warbler in Pennsylvania, prefers shrubby marshes and overgrown meadows to the forest habitat of most other warblers.  Unless you pay close attention, this little bird can go un-noticed as it forages in the shrubbery for insects. 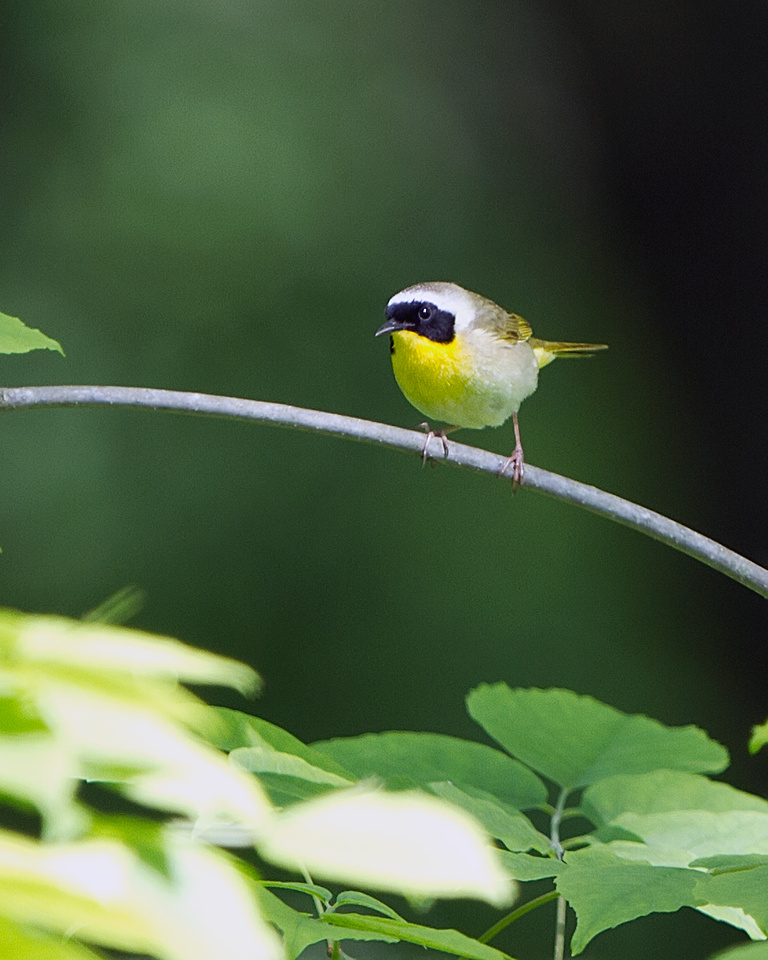 The Eastern Phoebe is found in open deciduous woodlands and clearings; usually near water. 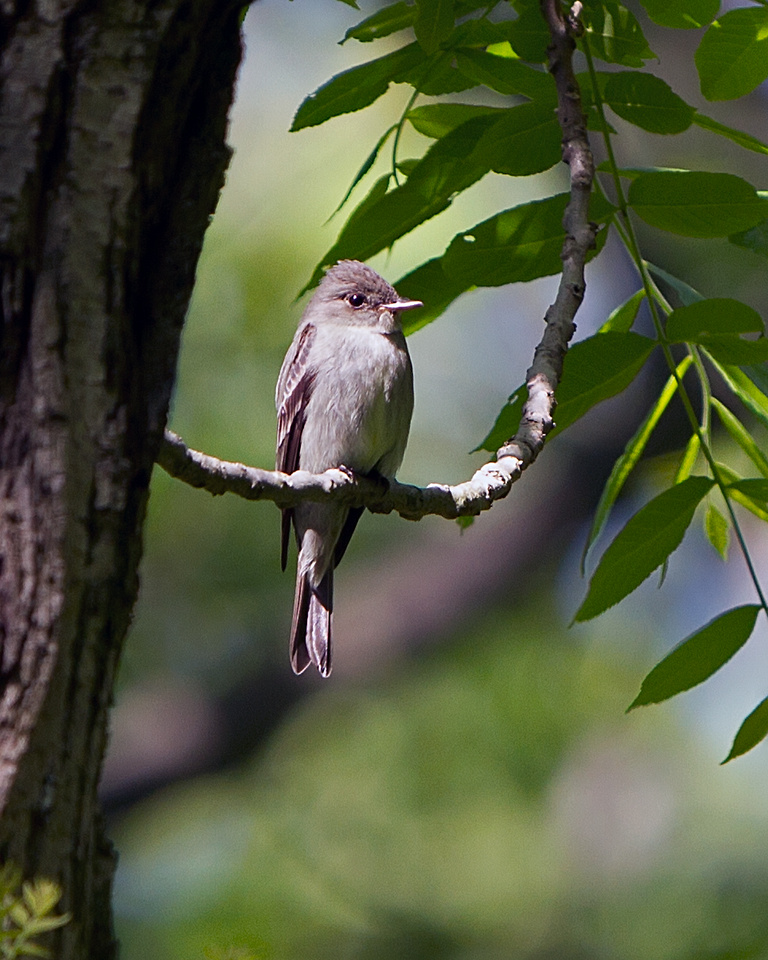 Since I was near the water, I took a break from watching for woodland birds and walked further down the hill to a hidden cove on Lake Arthur. I haven't seen a lot of waterfowl lately as they are most likely tending to their nests and/or nestlings. Soon, I expect the waters to be a little more crowded providing some good photo ops. I found some Red-winged Blackbirds moving about the water lilies creating a beautiful contrast between the bird and its surroundings. 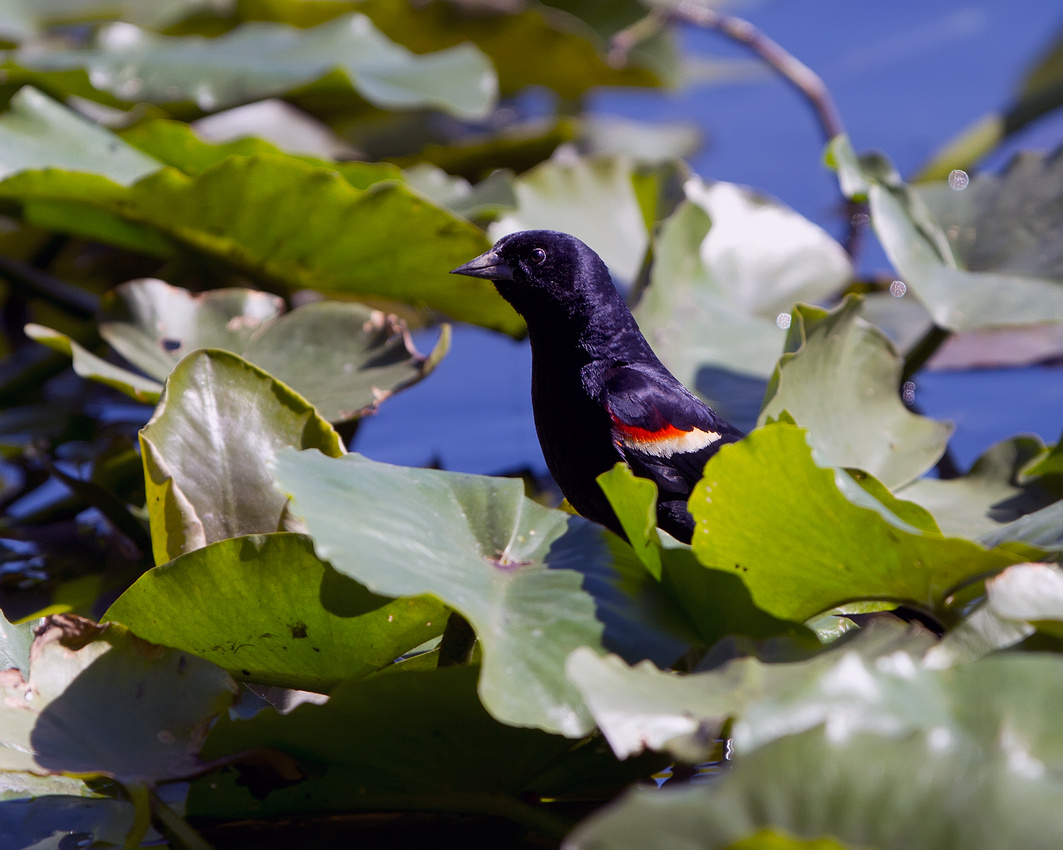 After moving back into the woods I followed a bird sound that was unfamiliar to me.  After waiting and listening for awhile, the bird finally appeared.  I wasn't sure what kind of bird it was.  It looked similar to a Yellow Warbler but nearly as large as an American Robin.  It wasn't until it's partner came along that I realized it was a female Scarlet Tanager.  Spending most of its time high in the treetops she finally came down to 10 or 12 feet allowing me to get this photo. 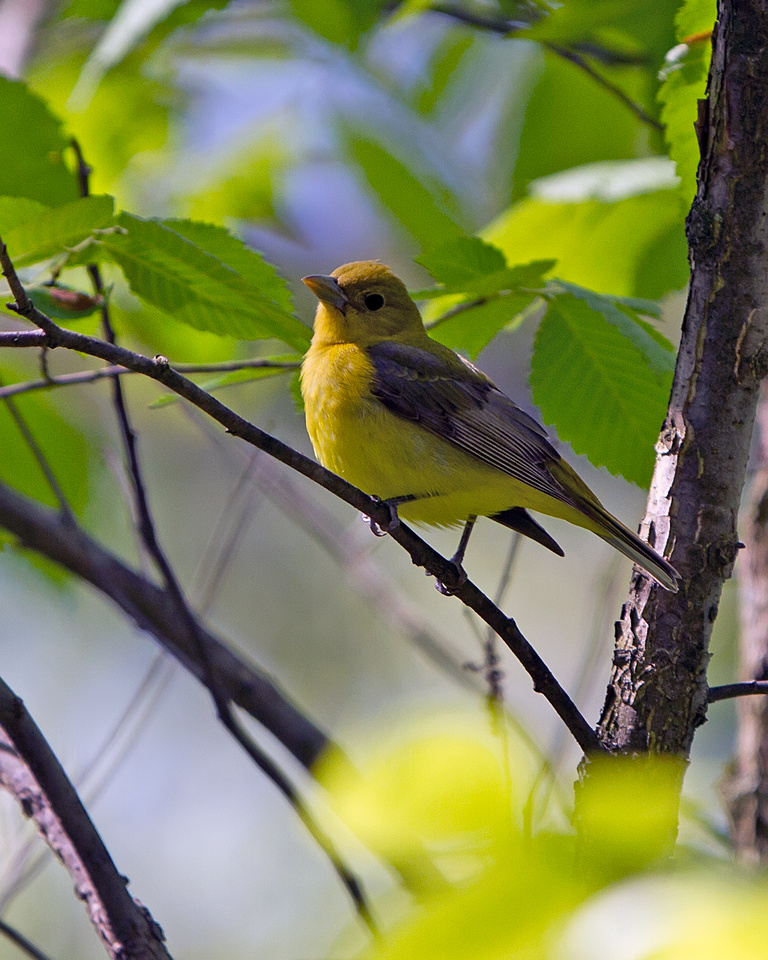 I saw the male Scarlet Tanager high in the treetops but because of the new leaf growth and the unattractive angle of photographing a bird from below, I could not get a shot.  Just as I was getting ready to give up he came down to a lower perch with his partner.  Just my luck, he landed directly in a bright spot of sunlight which makes the bright color of his plumage hard to expose properly.  If you've ever photographed birds you know that you take the shot when you can get it or you may miss it altogether.  Shortly after firing off a dozen or so shots he retreated back into the treetops.  In the fall the male Scarlet Tanager sheds its bright red plumage.  Afterwards, it looks much like the female. 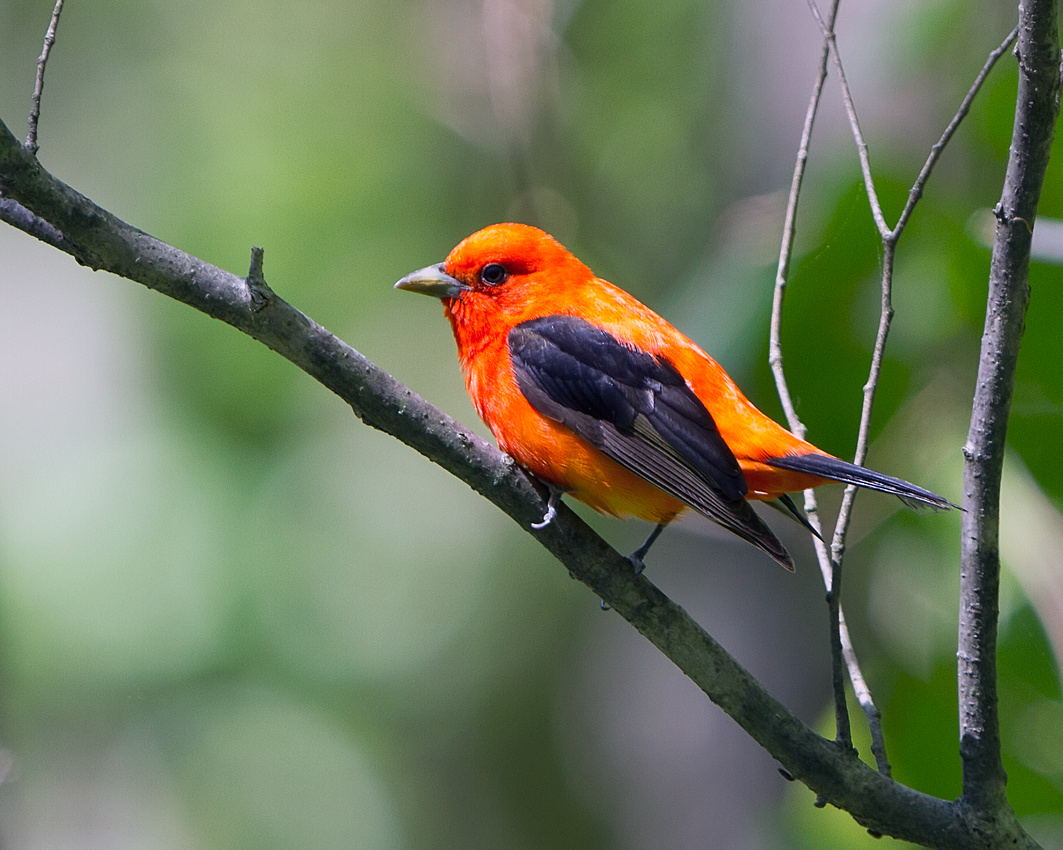 As it was beginning to get dark, I heard the noise of brush being pushed aside and branches being moved and I was only hoping it wasn't a bear because it was a long, uphill hike back to the car.  Luckily, it was a lone White-tailed Deer who really didn't mind that I was there. 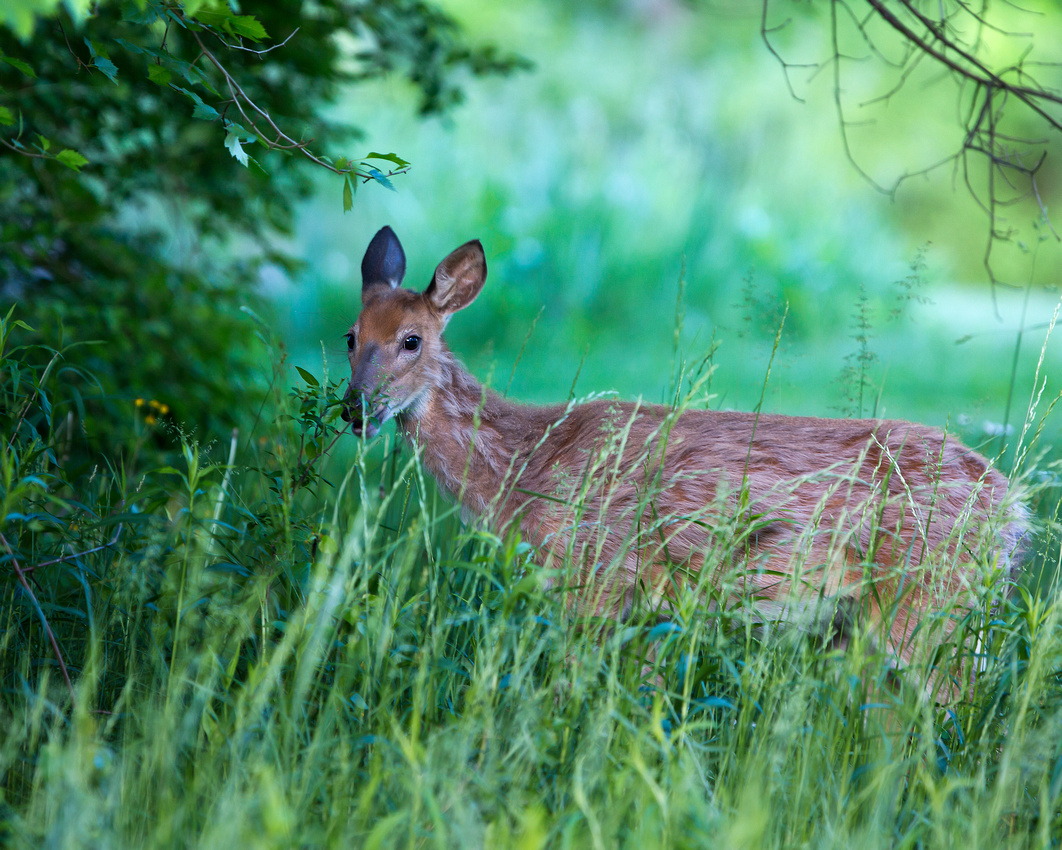 It was a great Memorial Day weekend and I am very happy with the results of my day in the woods.  Most of all, thanks to our veterans.  Without their sacrifices I may not be able to do what I love and to share it with everyone.